The Saxony brand A. Lange & Söhne, introduced its latest version of grand complication models that brings together the Rattrapante and Perpetual Calendar features under the same roof. 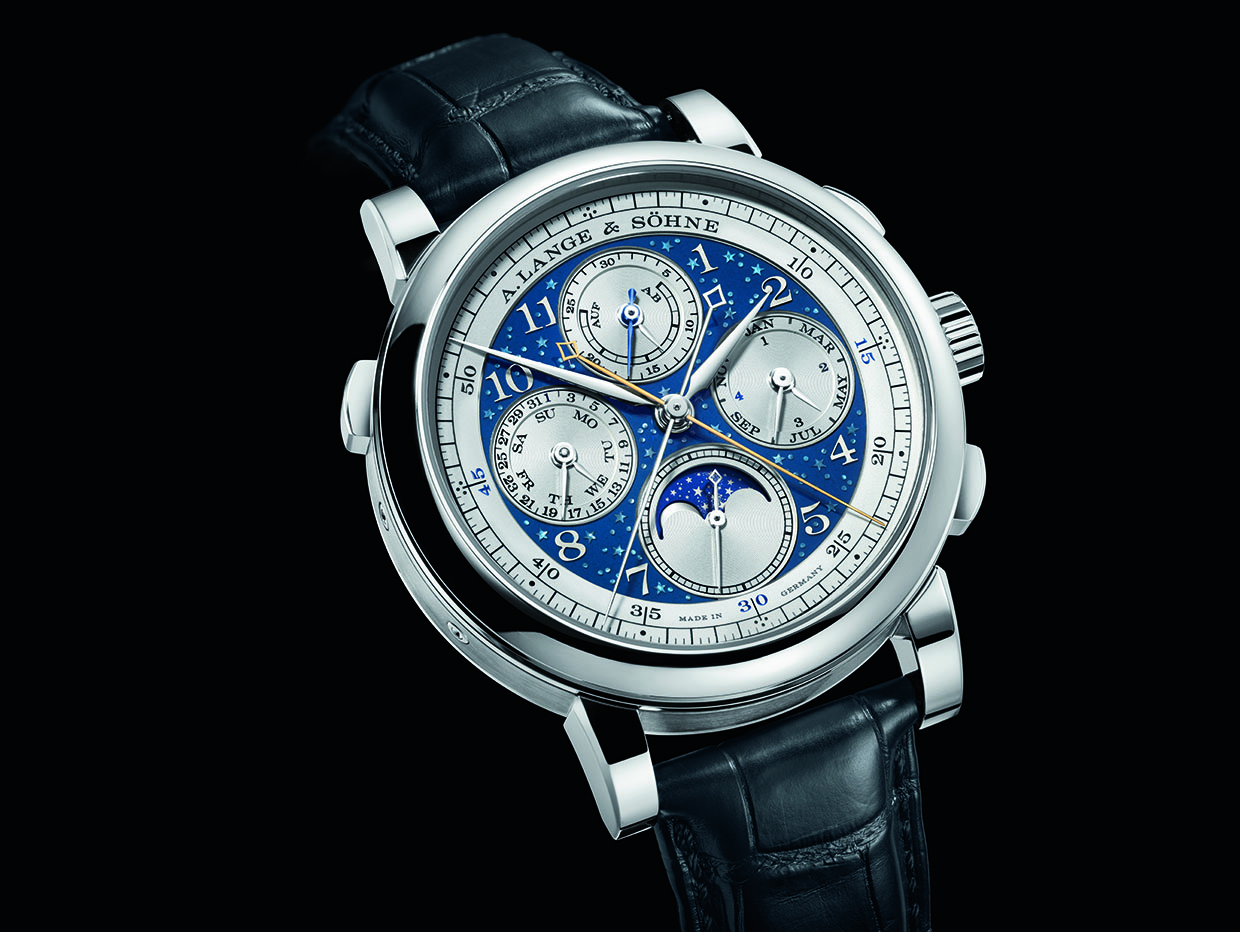 I know it’s not quite an appropriate opening for the review of a top of the line A. Lange & Söhne timepiece, but I want to say it anyways; the watch is as cool as its long name... Of course, the "Handwerkskunst" word in the name of the model plays an important role at this coolness. Translates as “craftsmanship”, you may not be familiar with Handwerkskunst timepieces as they are quite rare and known as the crème de la crème product line of the famous German brand. 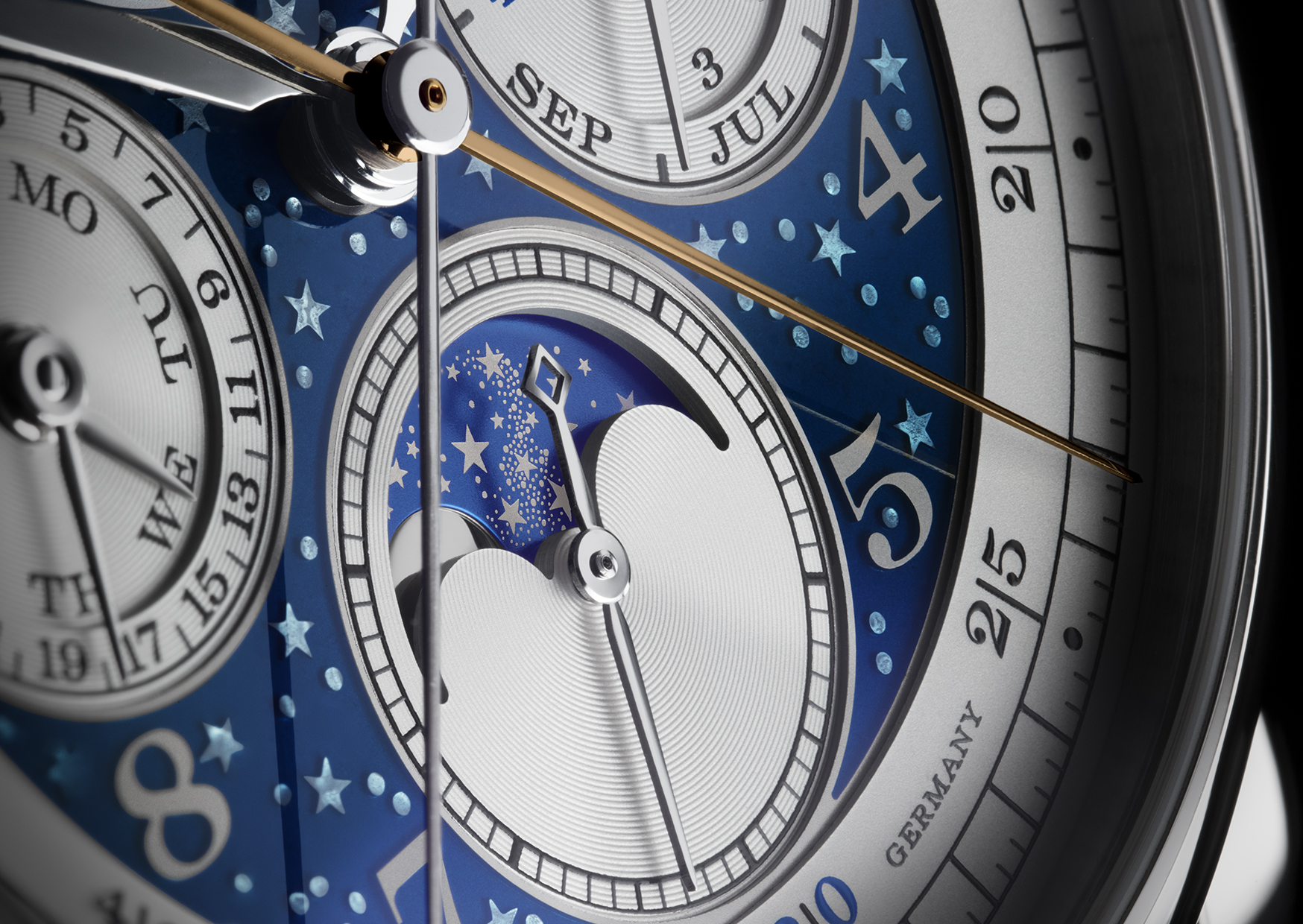 The model’s dial features blue and white colors with a lot of handcrafted detailing. The night sky illustration that we see on the moon phase indicator’s disk seems to be used as a background for the dial itself sporting translucent vitreous enamel star figures made by using the Champlevé technique. It is possible to see the same care and workmanship in the other components of the dial that stand out with enamel workmanship. The hands for the time-keeping, calendar indicators and power reserve display are in 18K white gold while the minute counter hand is in flame blued steel. Both split-seconds hands are also steel, but one is gilded for easy reading. 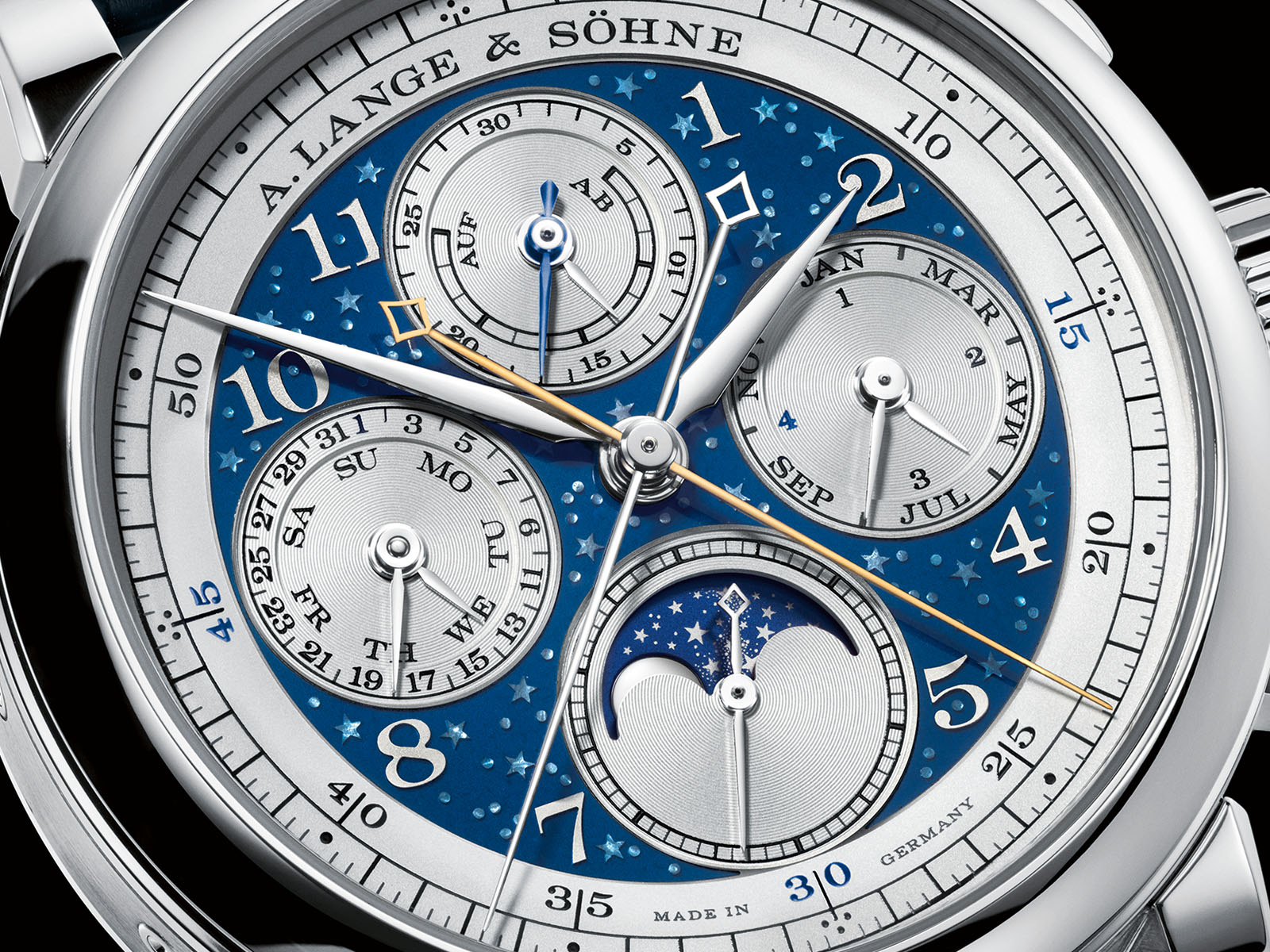 Since the most important feature of the model is Handwerkskunst (craftsmanship), the review is shaped accordingly. One of the other parts that share the spectacular craftsmanship is the caseback which is mostly not that important for the majority of luxury timepieces. A. Lange & Söhne 1815 Rattrapante Perpetual Calendar Handwerkskunst features a hinged case back (like a vintage pocket watch) that shows the ancient Roman moon goddess Luna, executed in relief and tremblage engraving. 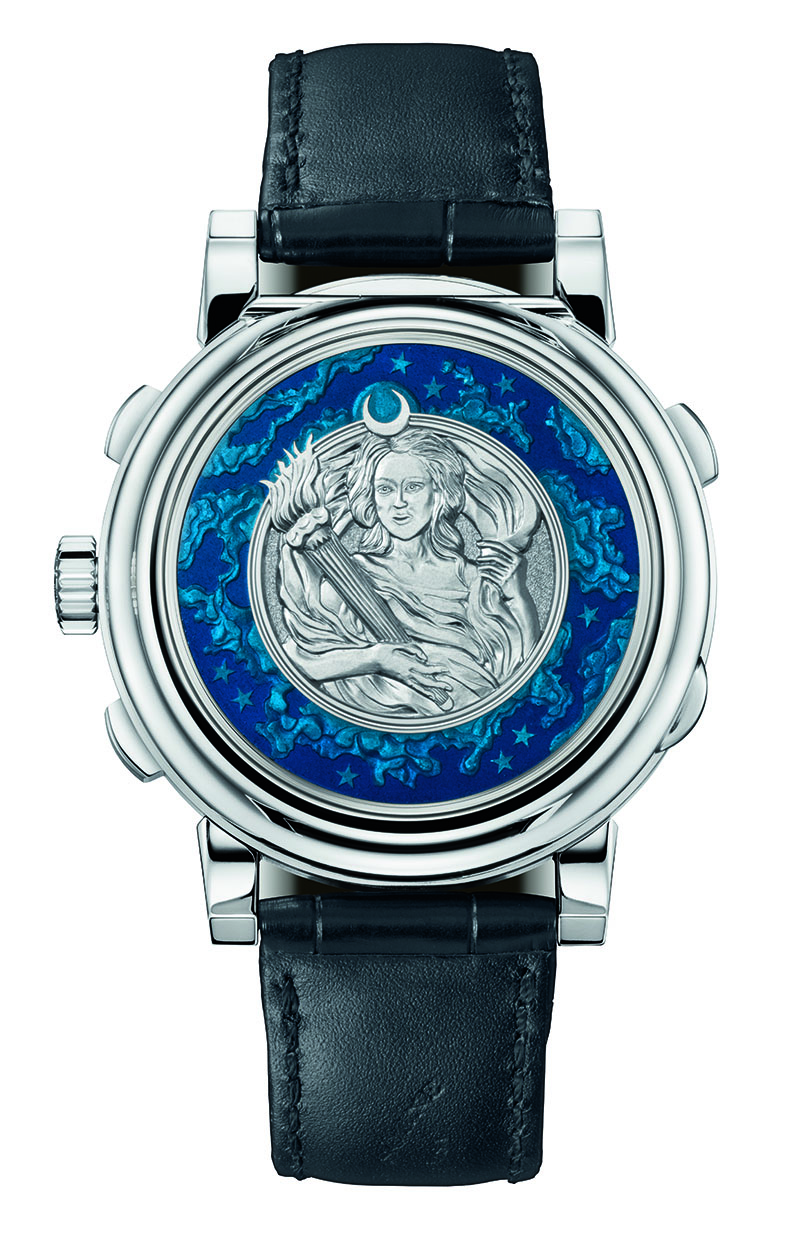 The movement is another part where the new model continues to show its nature. The model is powered by the Caliber Ref. L101.1, which also powers the standard version as well. Consisting of 631 individual parts, the movement is known as the most refined one of all eight chronograph calibers made by A. Lange & Söhne. Sporting granular frosting finished base plate and bridges; the movement also features chronograph bridges and balance cock highlighted with relief stars and tremblage engraving. 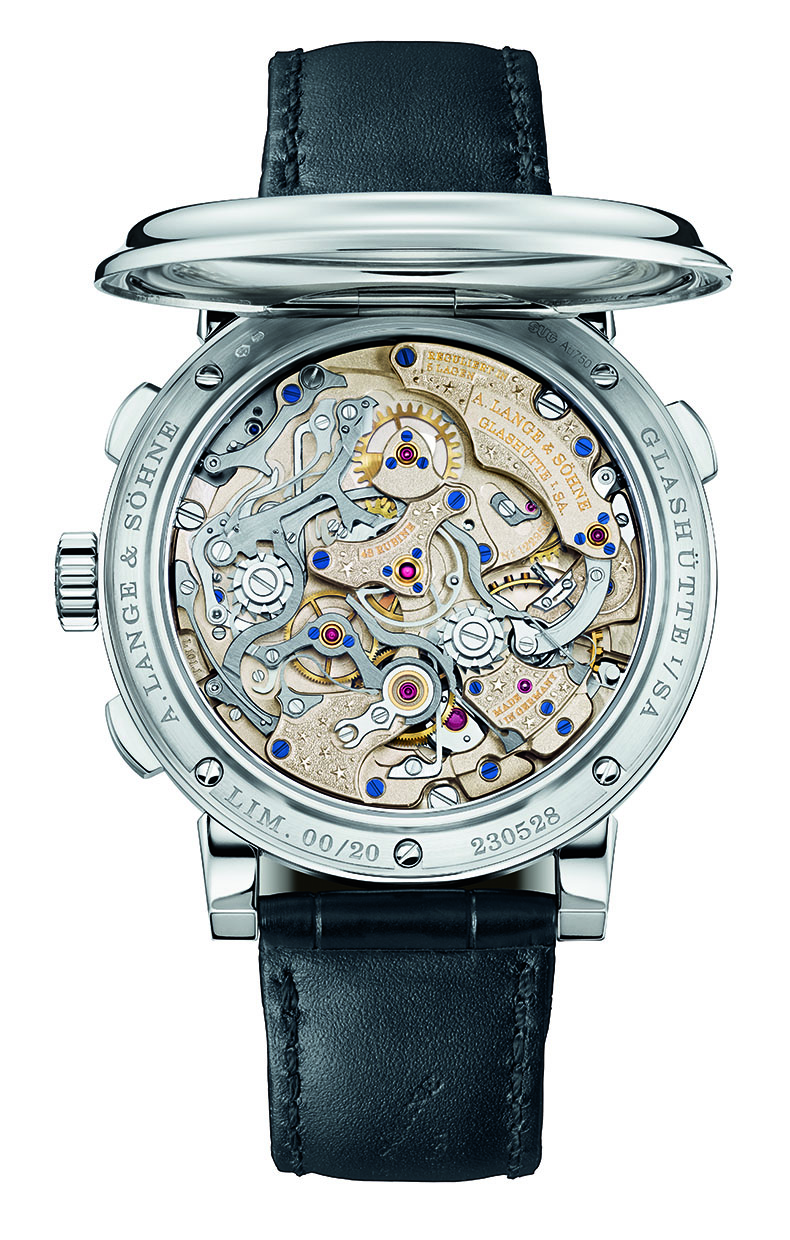 The case, which houses all of this glamour and engineering, is designed in the same size as the base version base measuring 41.5mm in diameter. The total height of the 18K white gold case -despite the rear hinge - is only 15.8mm. Sporting AR coated sapphire crystals on both sides the case is accompanied with a black alligator strap and an A. Lange & Söhne signed folding clasp made of 18K gold. 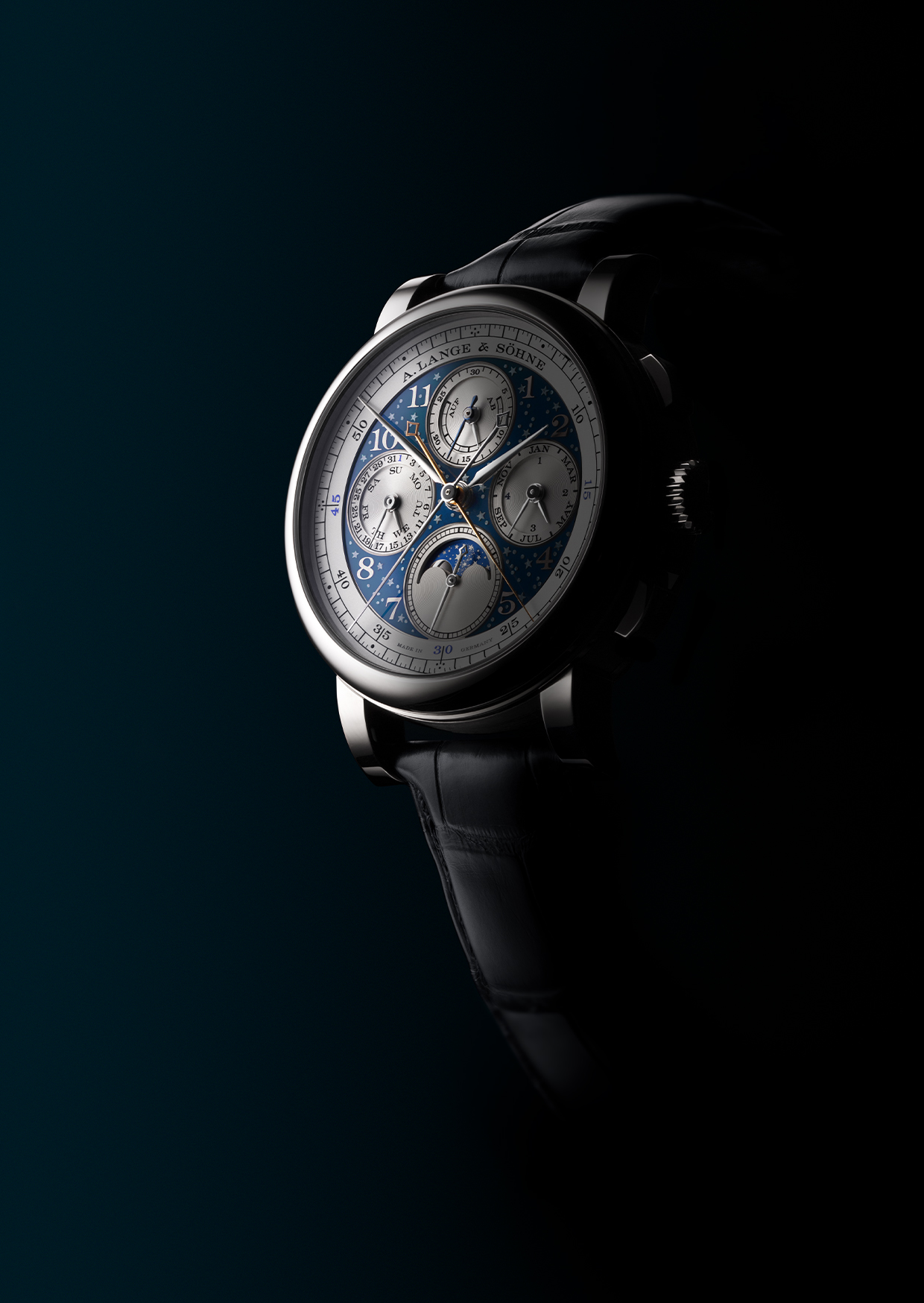 A. Lange & Söhne 1815 Rattrapante Perpetual Calendar Handwerkskunst is limited to 20 units only and priced at € 290,000.