As mentioned in the title, the original Hamilton Jazzmaster Face to Face was first introduced in Baselworld 2013. It was a two dial watch with flipping case mechanism similar to Jaeger LeCoultre’s iconic model Reverso and TAG Heuer’s Monaco 69. One side the watch had a chronograph and the others side has a time only watch. Besides its extra ordinary design, the 1st Gen Face 2 Face employed two separate movements to power up the functions. An ETA 2094 movement powered the chronograph, and an ETA 2671 movement was used for the time-only side. The movements were placed side by side in to the large oval case. Slightly odd but extra ordinary for sure, the watch gained attention with its most obvious feature; the flipping case. 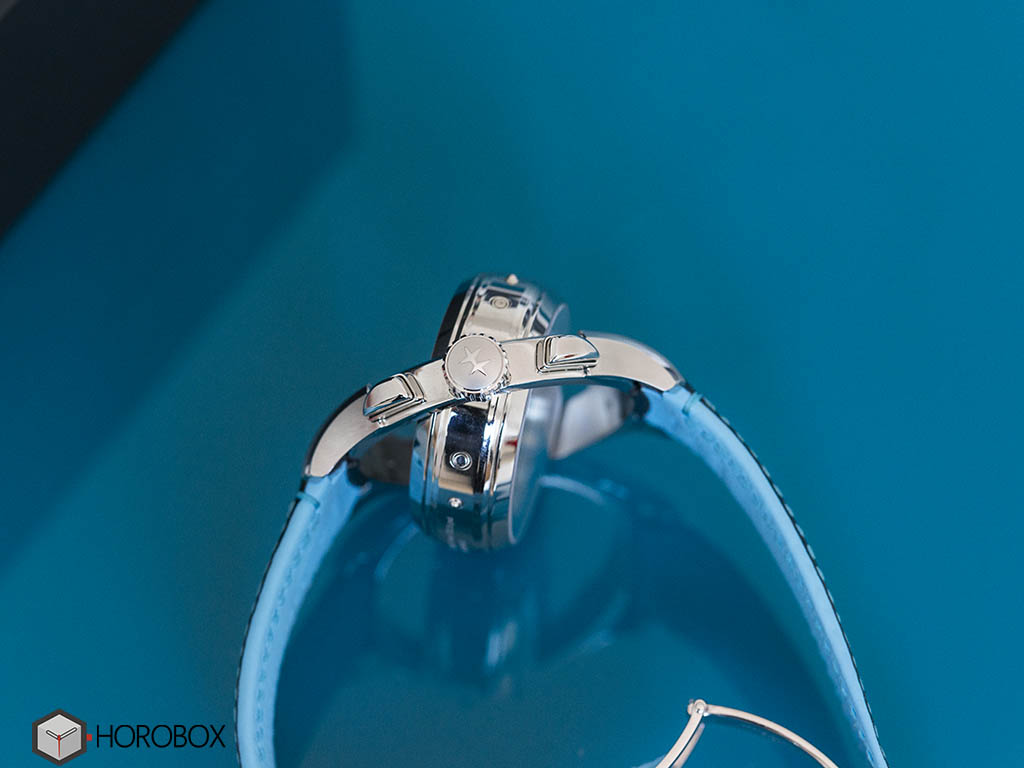 For Baselworld 2016, the same, simple flip mechanism is used, but the watch is now powered by one single movement which is a far better solution in terms of technology and design. The separate dials feature chronographs indicating some useful calculations and information. 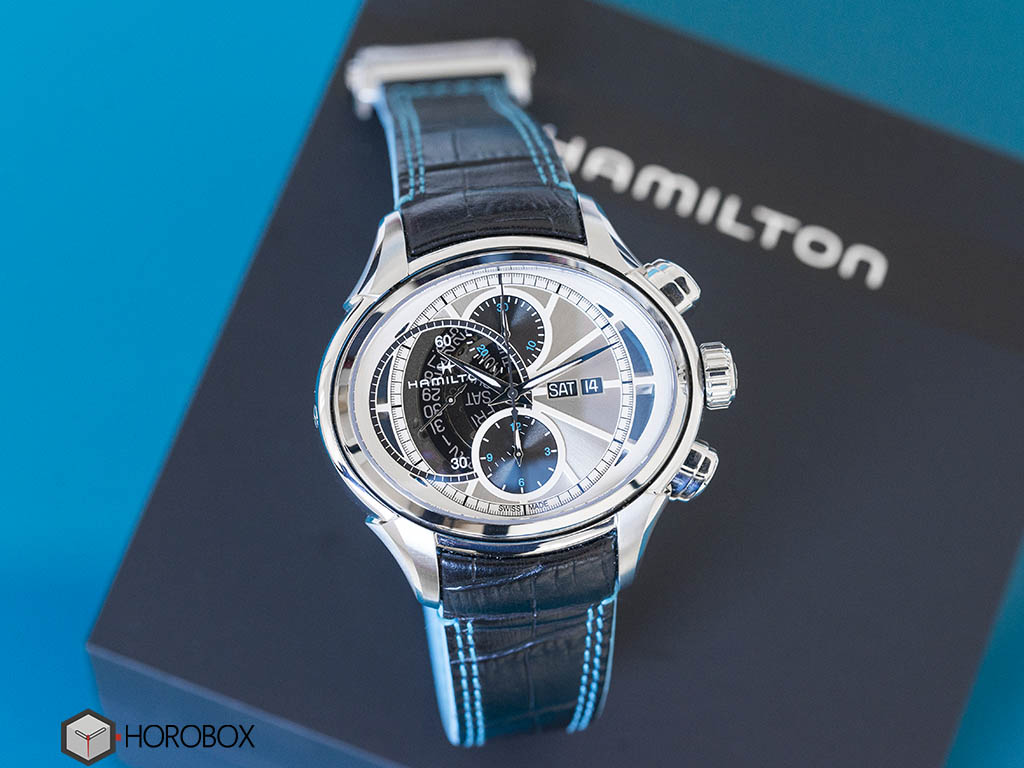 The design is pretty fascinating. The front displays 30-minute and 12-hour chronograph counters as well as a day-date window at 3 o’clock, the back continues with the chronometer, but displaying interesting metrics on its scales.

The dials are framed by the slightly elongated, rotating oval case. In terms of built quality, I might say that Hamilton did a great job as the case is finished beautifully and the flipping mechanism works flawlessly.

Hamilton Face 2 Face II sports a blue colored theme brilliantly expressed by different components in a beautiful harmony. Not only is this blue used on the chronograph hand on the back dial, but also on the stitching on the strap, as well as the inside of the strap. 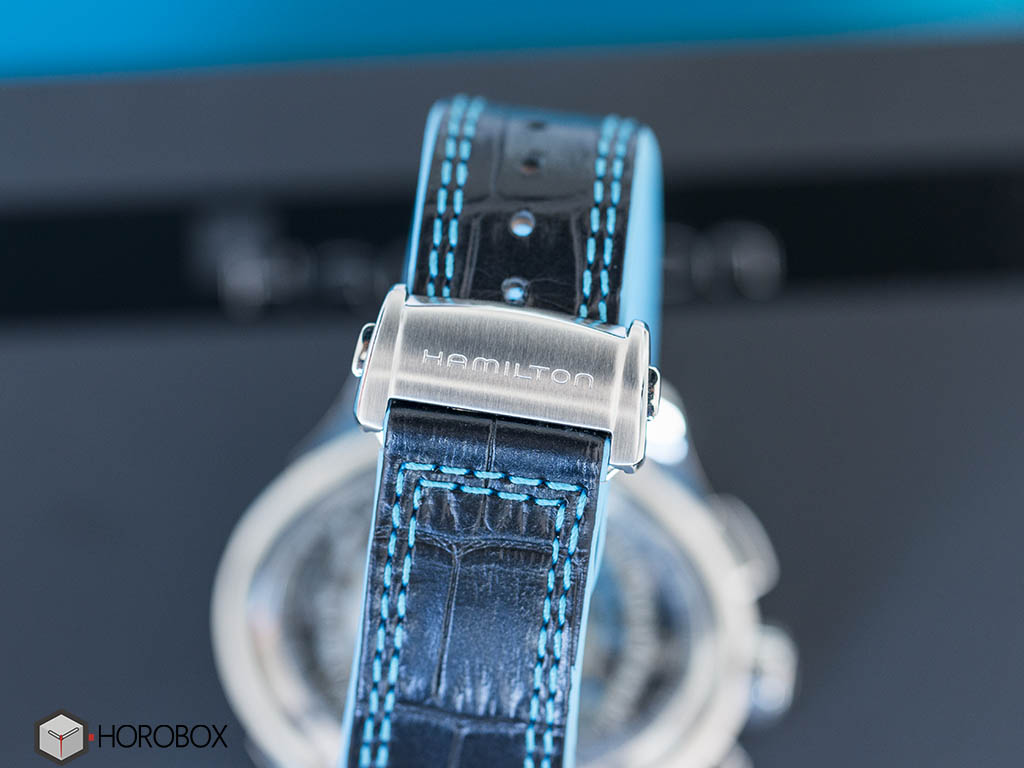 The front dial is composed of multi-layer dials in luminous, silver grey color with a partially transparent smoked disc and a skeleton formed casing ring. 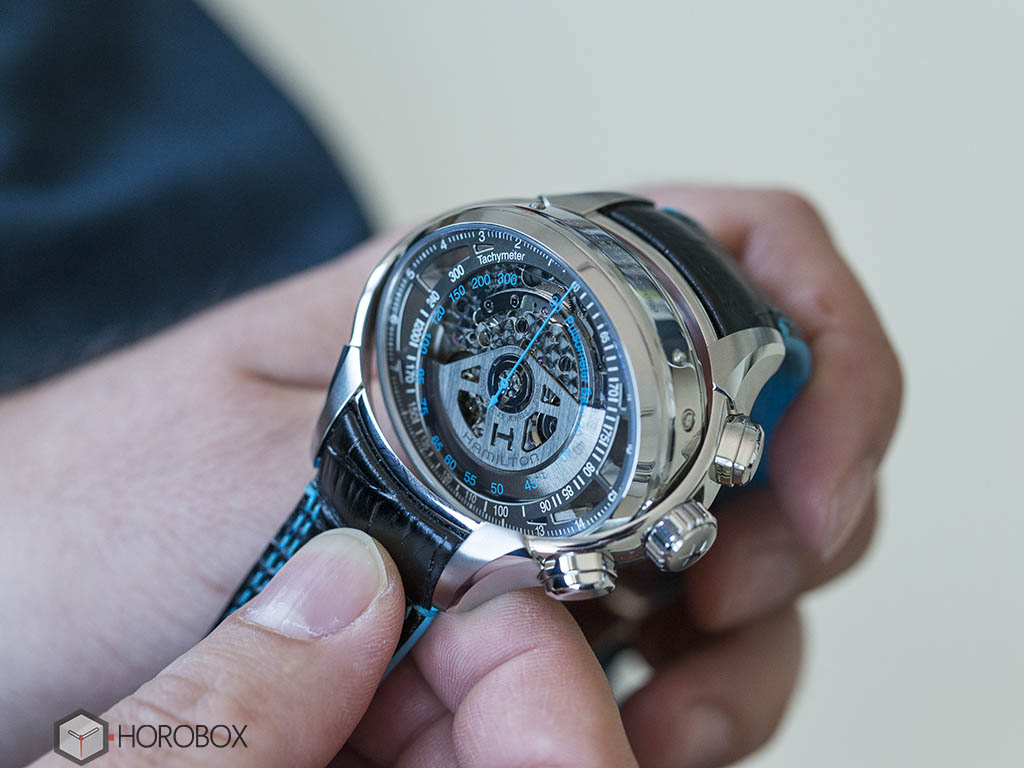 The other side offers a well balanced contrast with the industrial looking, anthracite colored movement. A pulsometer directly printed on the back of the crystal, enables the user to keep track of his/her own or someone else’s pulse. A tachymeter provides an accurate mechanical measurement of speed, while a telemeter can be used to calculate distances to a remote event, such as a lightning bolt. 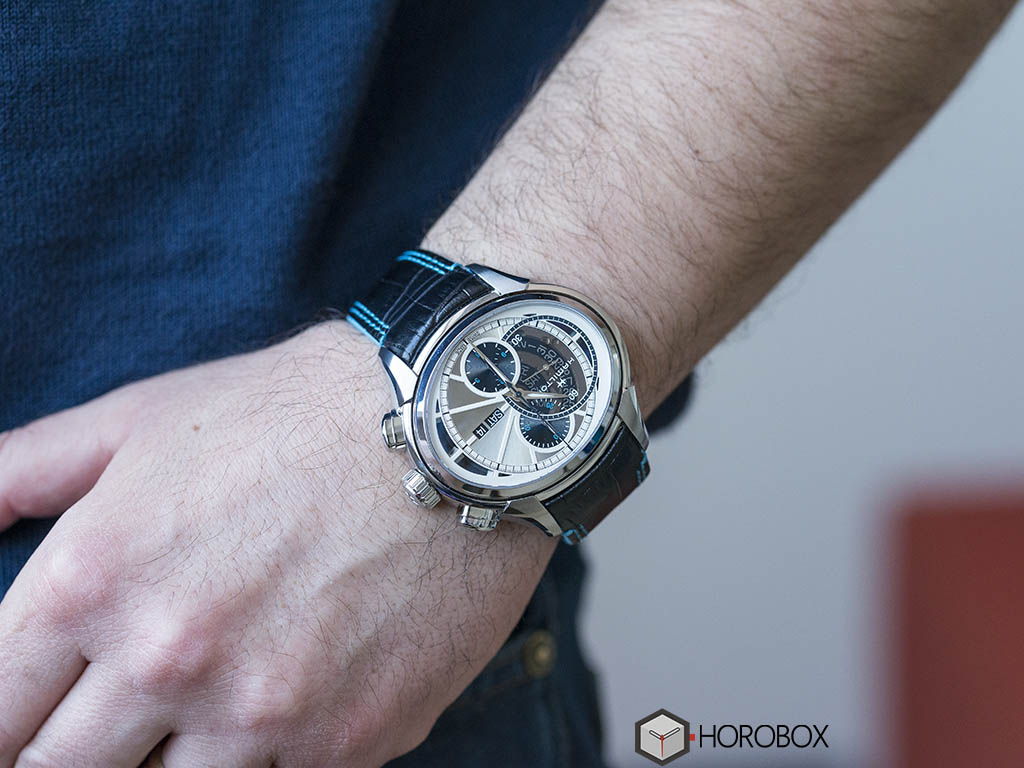 Considering the 1st Gen model, Hamilton should be mainly focused on the flipping mechanism and double side design however the separate design of the functions is also a nice idea as it would look much cluttered and messy via a single dial lay out.

As mentioned before Face 2 Face II employs one single movement to power up all the functions. Hamilton’s came up with a sharp engineering approach and extended the chronograph seconds counter hand to the back and have another hand on the back dial. 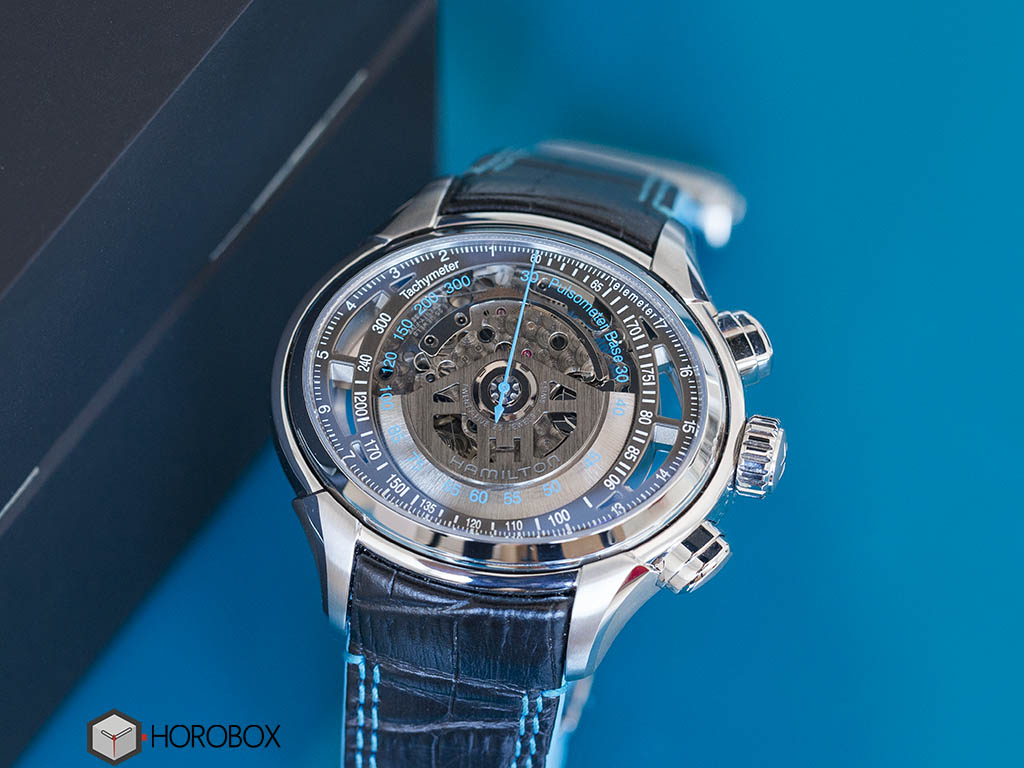 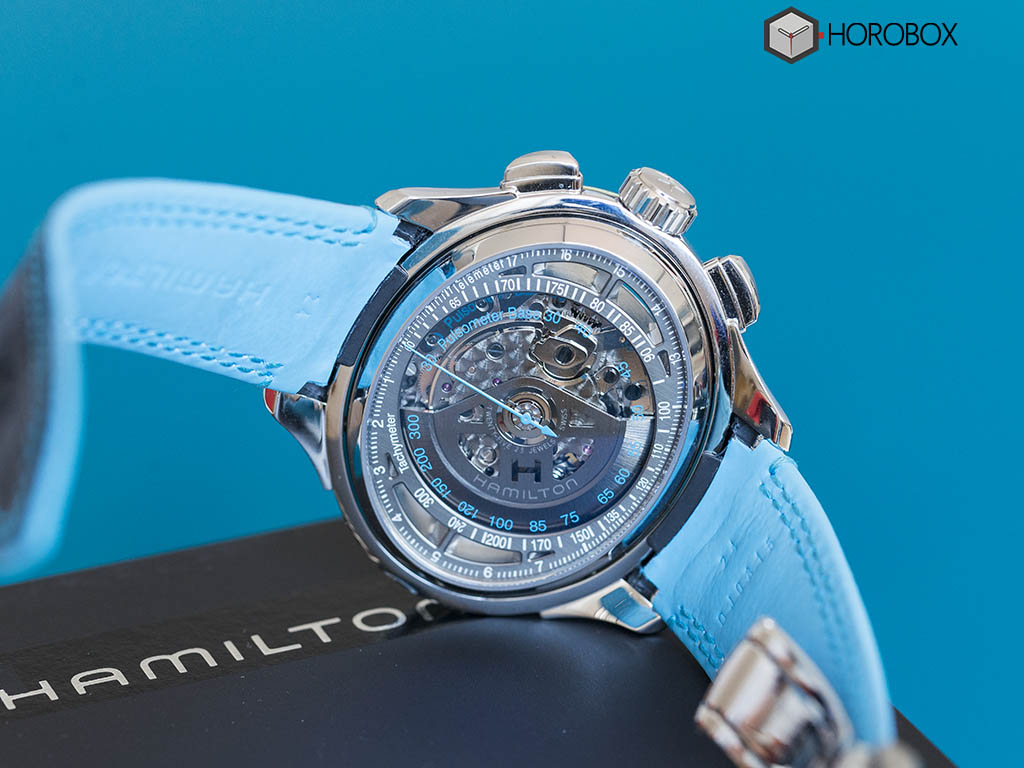 The movement is named Hamilton H-41. Hamilton only communicates the power reserve as 60h.

The watch is powered by the automatic Caliber H-41 offering 60h powere reserve when fully wound. The minute totalizer (0-30) is at 12 o’clock, hours (0-12) at 6 o’clock and a continuous running second hand at 9 o’clock makes us think that it’s a good old ETA Valjoux 7750 based movement. 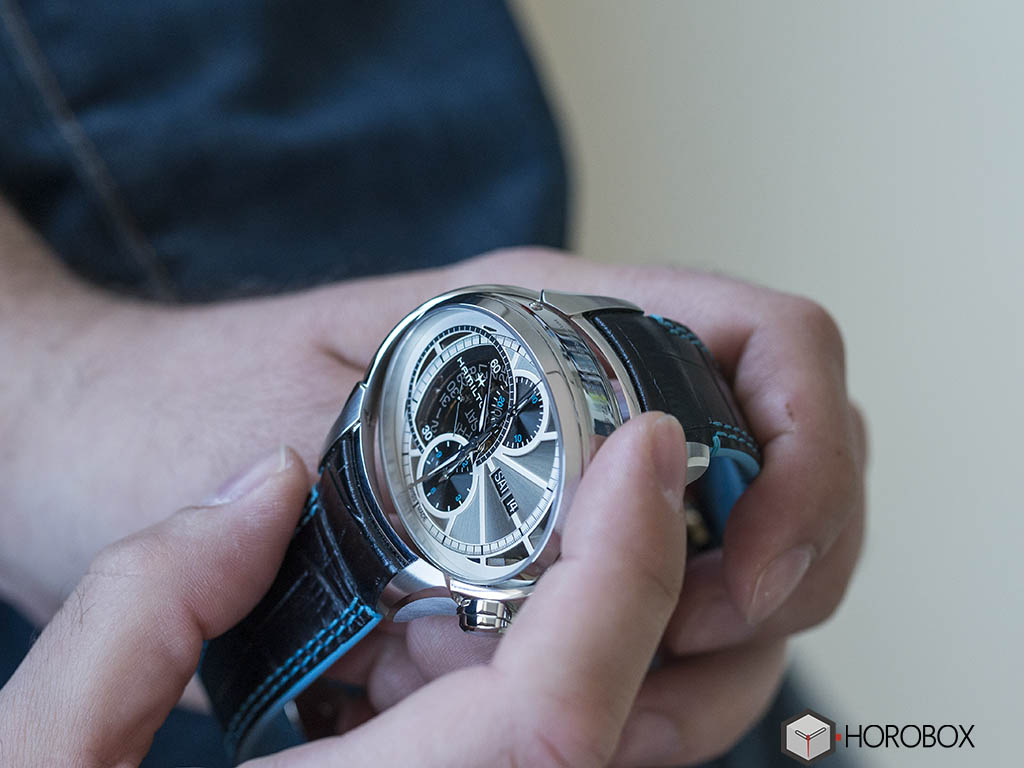 In fact, I find this unique watch to be pretty cool. Relatively big and oval shaped case surely limits the number of the potential customers but since this is a limited edition watch it shouldn’t be a problem.