A gift from a real watch brand to real watch enthusiasts: The new Omega Speedmaster Professional. 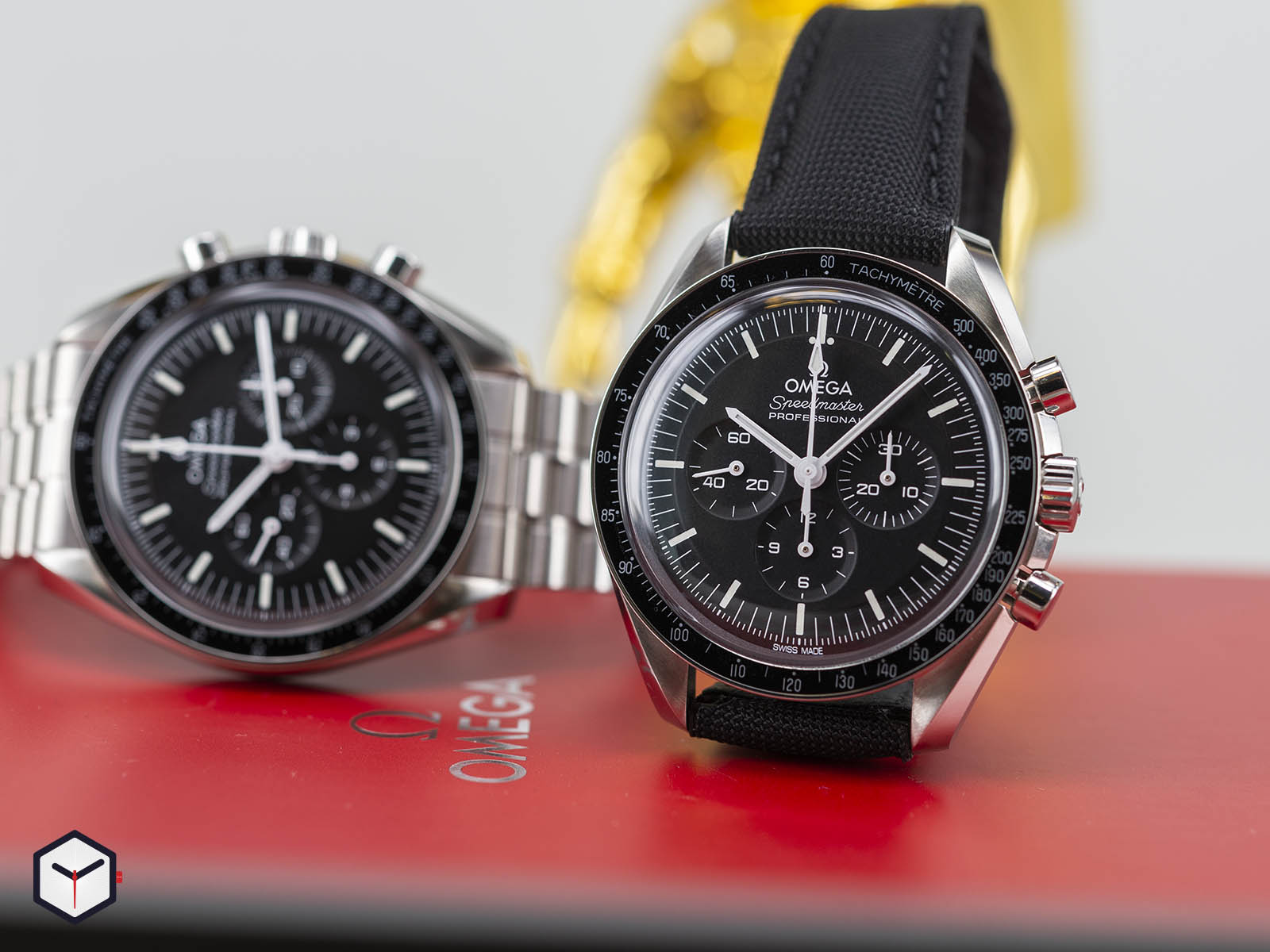 It would not be an exaggeration to say that Omega Speedmaster Professional is a watchmaking legend.  This instrument succeeds in becoming one of the cult models in today's world of horology, accompanying one of the greatest achievements of humanity within the scope of NASA's space program, with its iconic design and superior Omega quality. 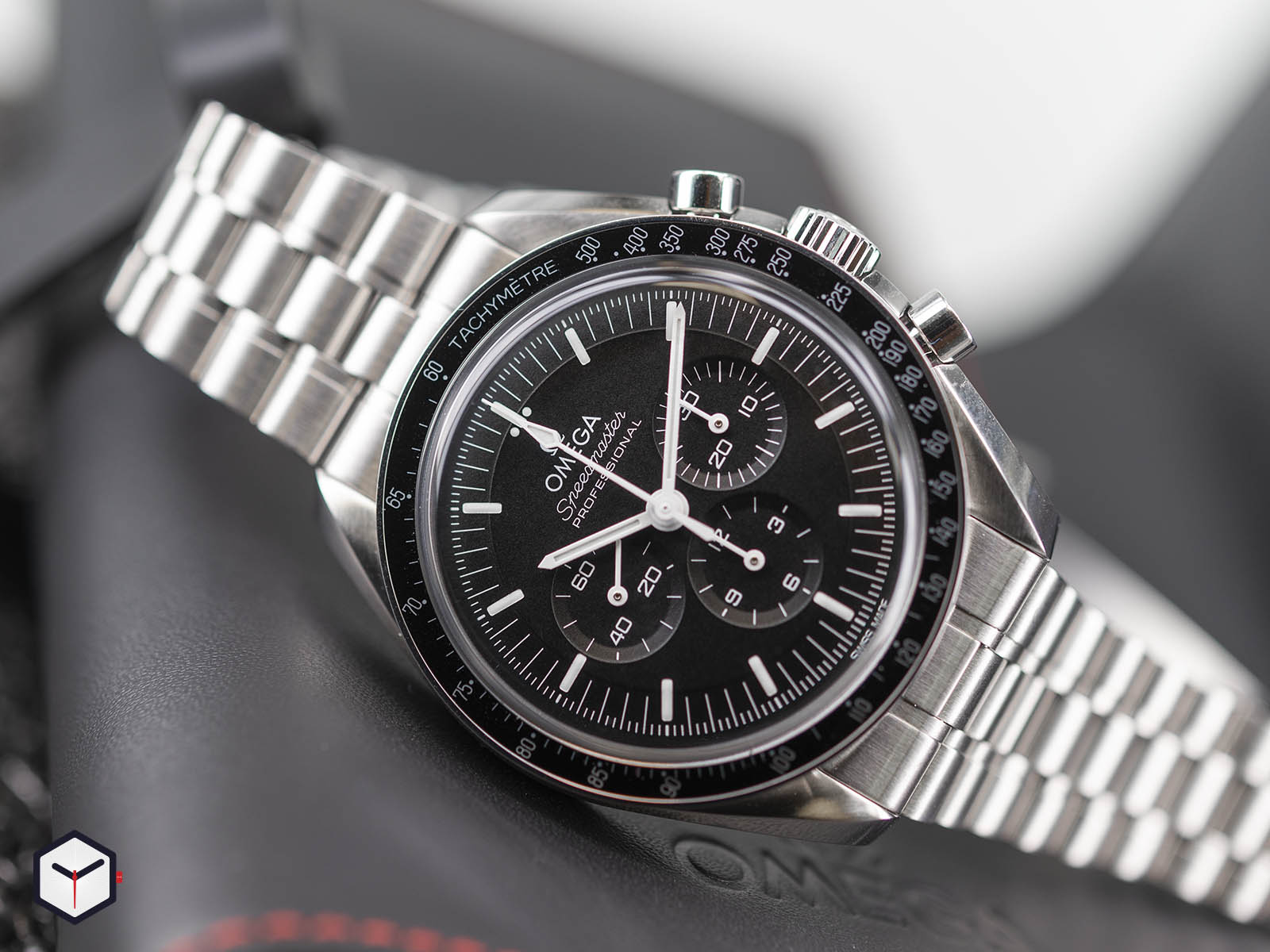 The Speedmaster is a model that lives with all the features that made it a legend. Moreover, it has to carry a great responsibility on its shoulders. If you are one of those who say, "Although many years have passed since it was chosen for space missions, this event is still one of the features that the brand highlights in the Speedmaster collection", I must regret that you are making a big mistake as the Speedmaster Professional is much more than a space chronograph. 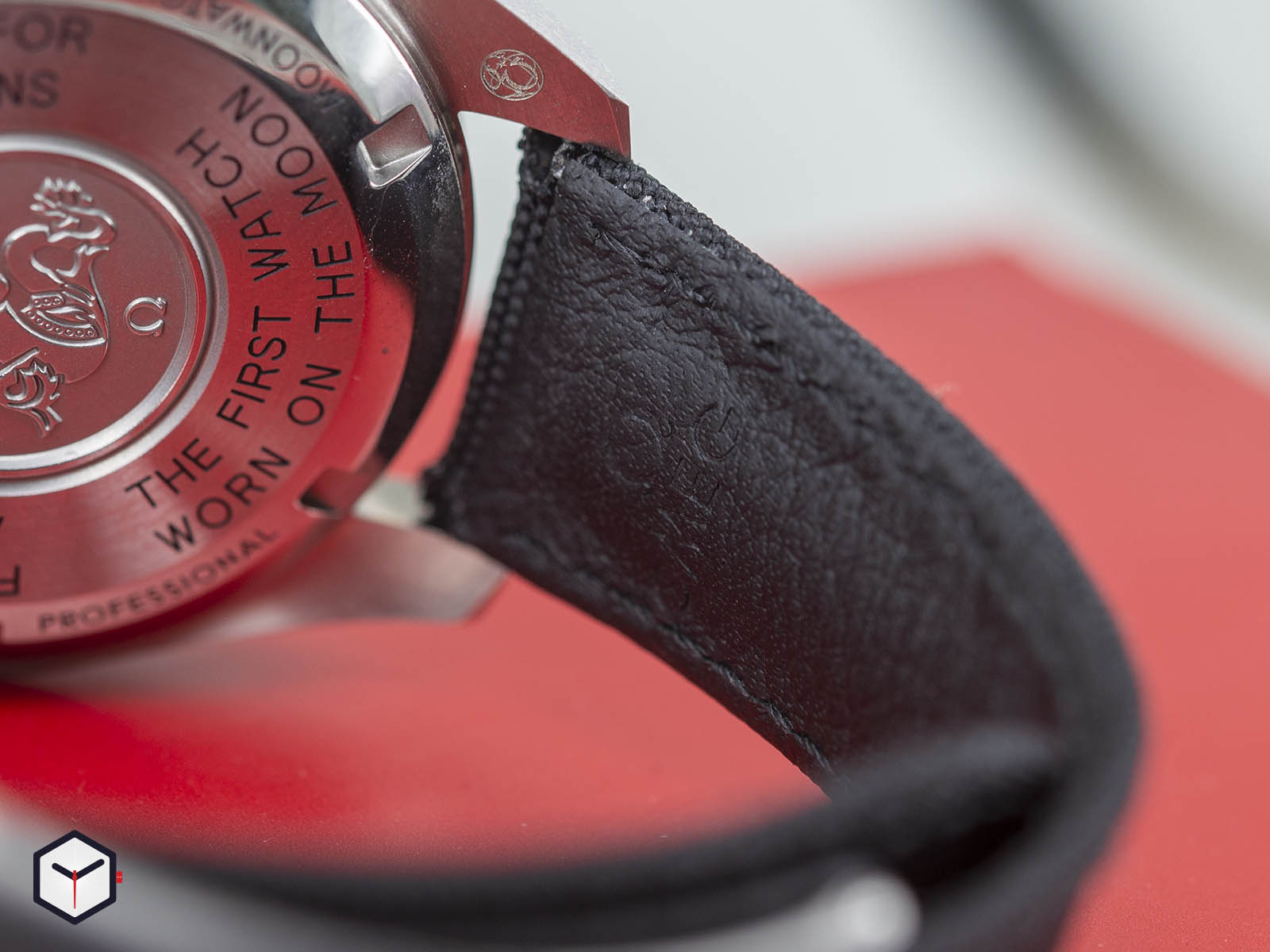 Renovating the cult Speedmaster Professional was, in a way, a risky operation for the brand. Updating/renewing a model that has become classic and perfect from the very beginning always brings some dangerous maneuvers. Updating the Speedmaster Professional family is the same for Omega as introducing a new version of the 911 is for Porsche. I realized how successful the result was when I put the watch on my wrist. The model did not lose any of its features that made it a legend, on the contrary, it continued on its way by adding on to them. 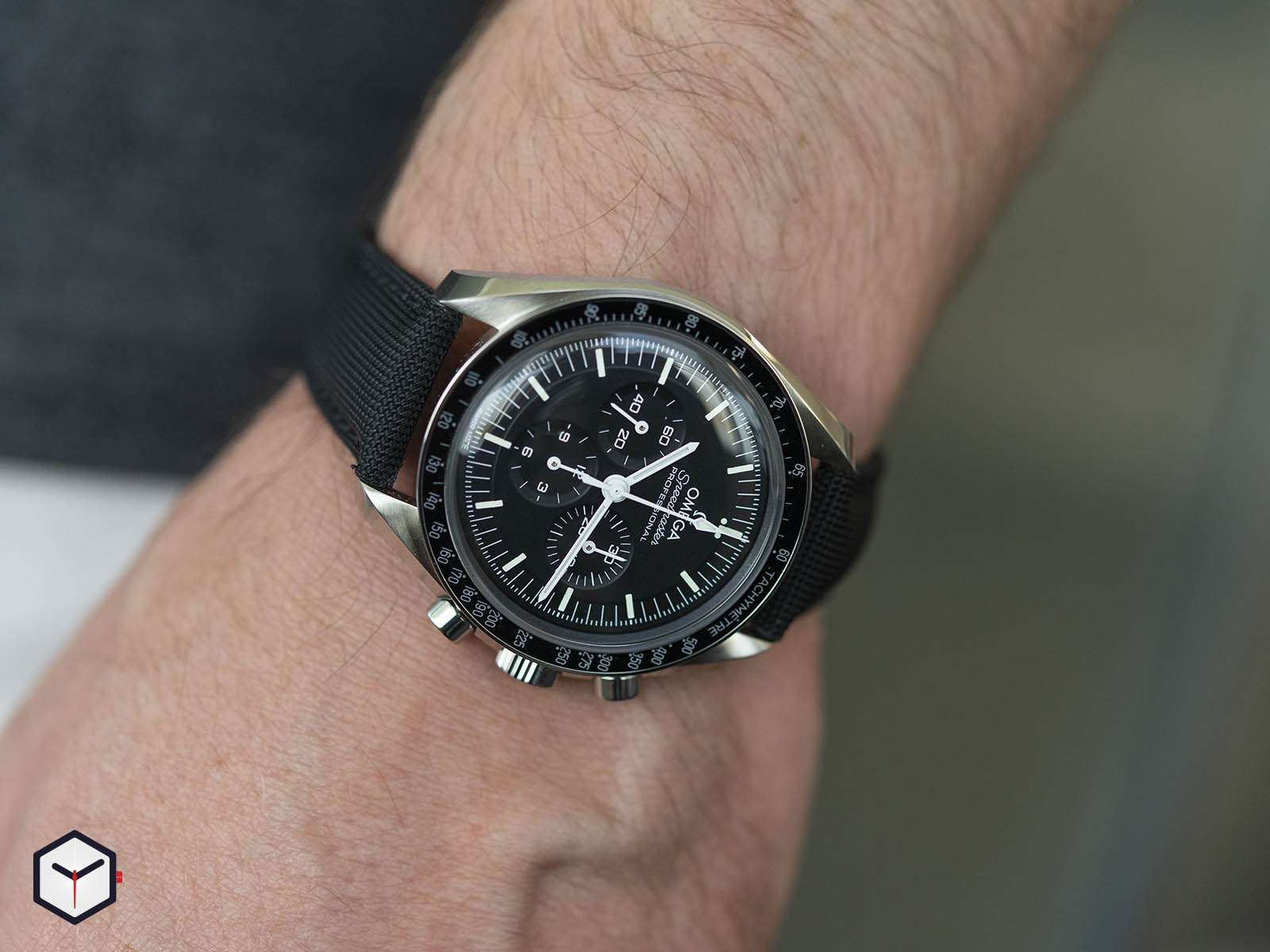 As in the previous series, the watch has a 42mm diameter stainless steel case. The curves unique to the Speedmaster family and the perfect harmony of polished/brushed surfaces are present in the new model as well. The bezel insert, which is produced from aluminum with the idea of staying true to the original, hosts a tachymetric scale. At this point, I can't help saying that "a ceramic bezel insert could be better”, but for that feature, we need to reach out to another legendary model, the Speedmaster Caliber 321. 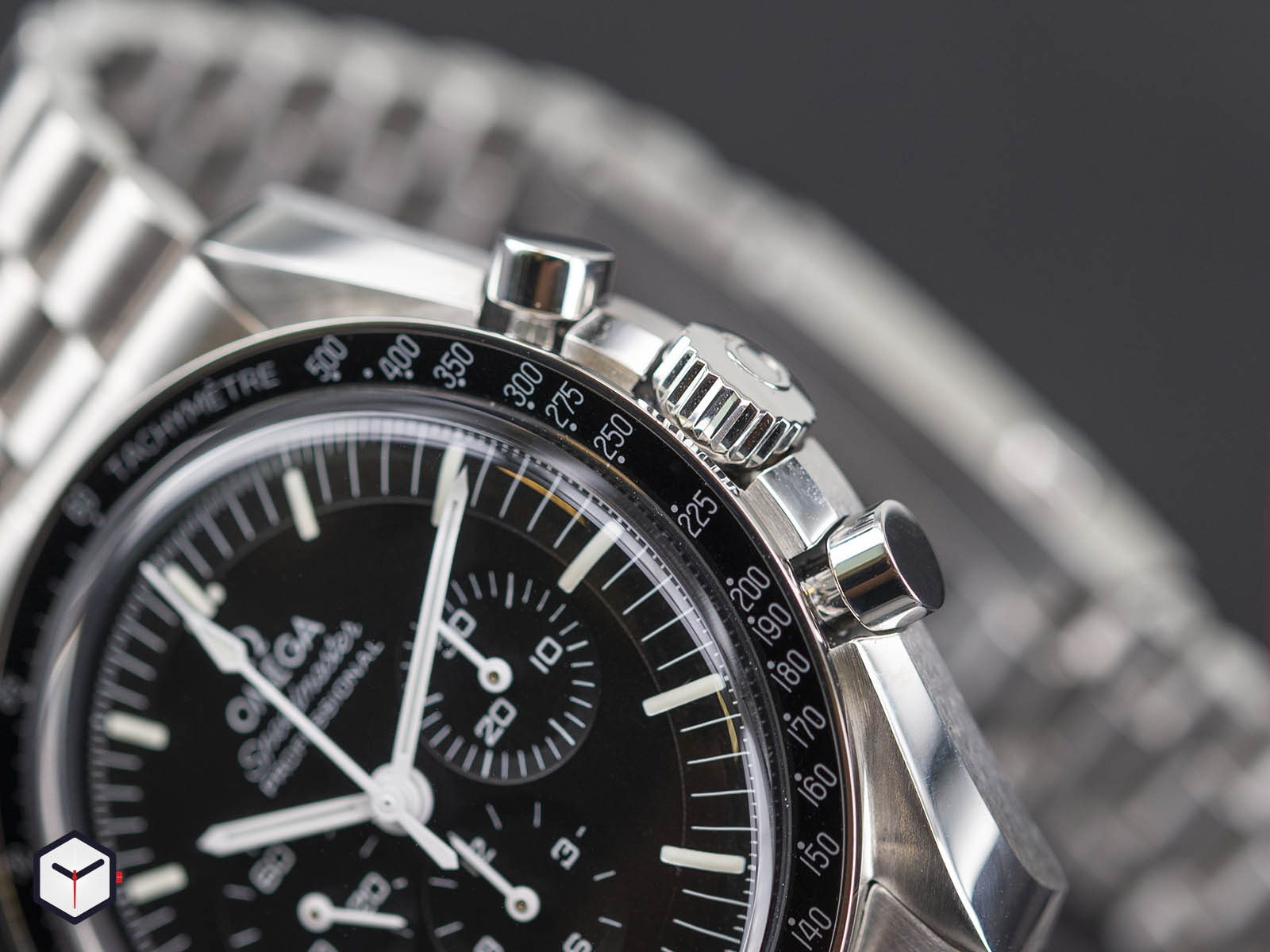 The dial of Speedmaster Professional has features that are qualified enough to be taught as a lesson in schools. White numbers on the matte black surface, thin white frame, Super-LumiNOVA filled hands, and indices offer maximum legibility in all conditions. The visibility of the dial and the hands at night is almost the same with a diver's watch. Again, it will be a very subjective criticism, but I would rather see the blue color instead of the green glowing Super-LumiNOVA. I know there will be no difference in terms of functionality. The placement of the chronograph counters on the dial is also the same as the previous series. 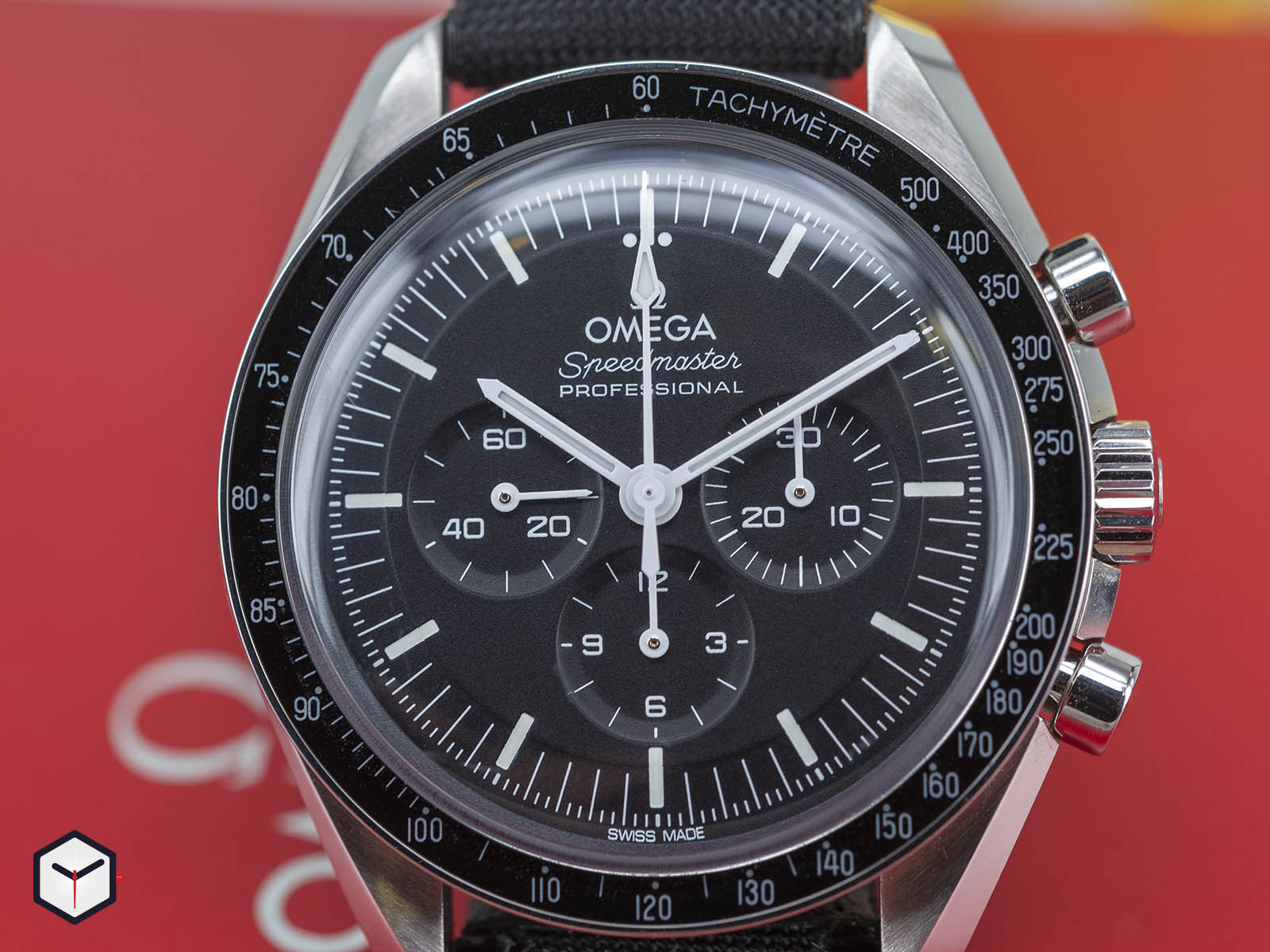 Equipped with the Master Chronometer certified hand-wound Caliber 3861, which has become the new standard of the industry under the leadership of Omega, the model has a power reserve of 50 hours. The movement, which can withstand a magnetic flux of 15,000 Gauss, also impresses by its superior timekeeping and durability features. The winding feel of the model, which features a hand-wound movement as a Speedmaster Professional classic, has been noticeably improved compared to the previous model. It is now much easier to grasp and turn the crown. The pressing feel of the chronograph pushers is more refined. 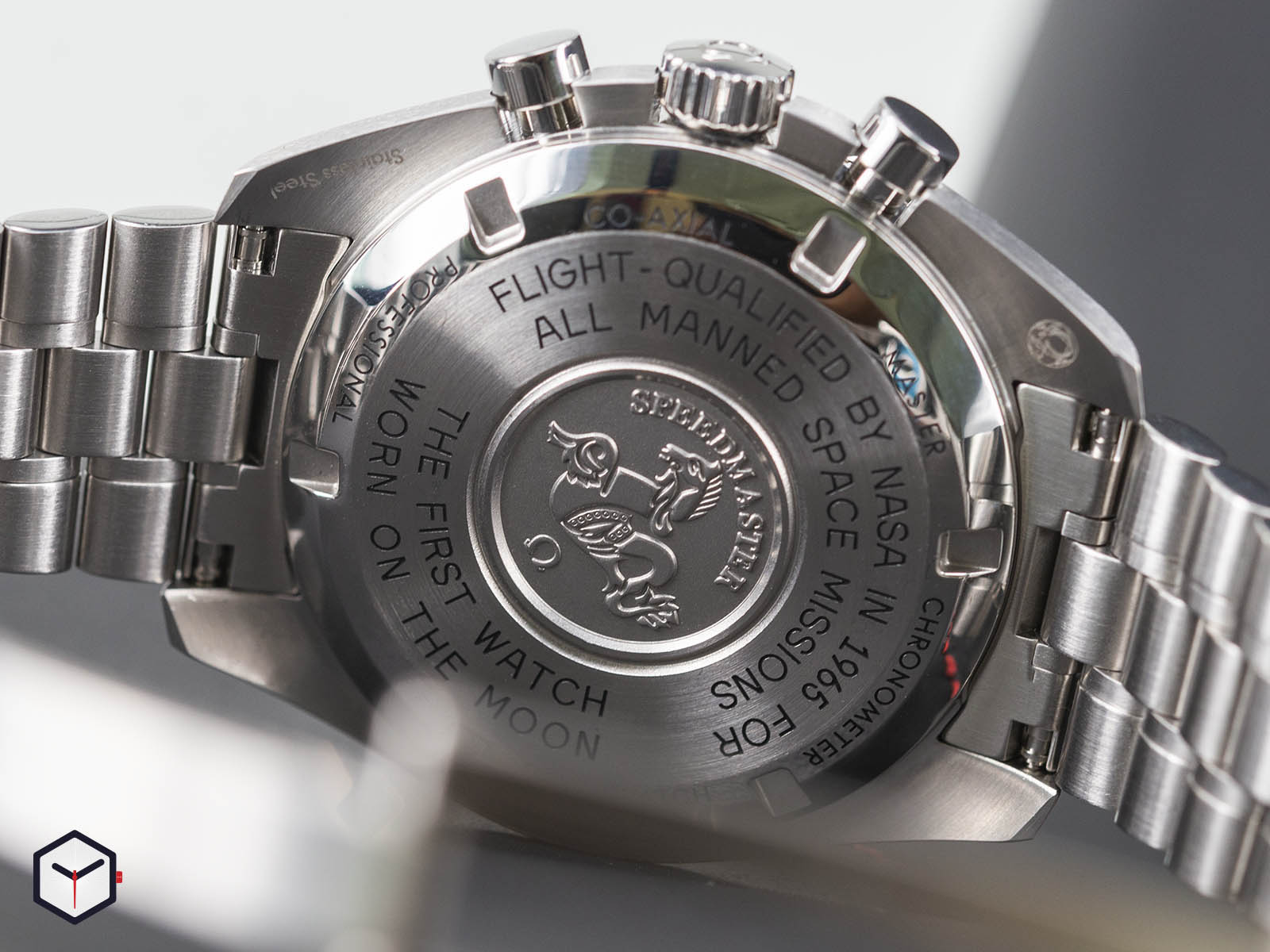 This model is available in many material and color variations. The two models we have here sport hesalite crystal and a closed case back. The same models are also available with sapphire crystal and transparent case backs. In addition, 18K pink and white gold case/bracelet alternatives unique to Omega, called Sedna and Canopus, are also available for watch lovers. It is not easy to find the laser engraved Omega logo in the middle of the hesalite crystal model, which we had the chance to try on our wrist. Once you see it, you try to see it at every opportunity. Yes, the Speedmaster with plexiglass glass is much more suitable for the DNA of the model. However, considering the challenging conditions of daily life, I think the sapphire crystal version is more user-friendly. Moreover, we also get the chance to watch the eye-catching movement in this version. 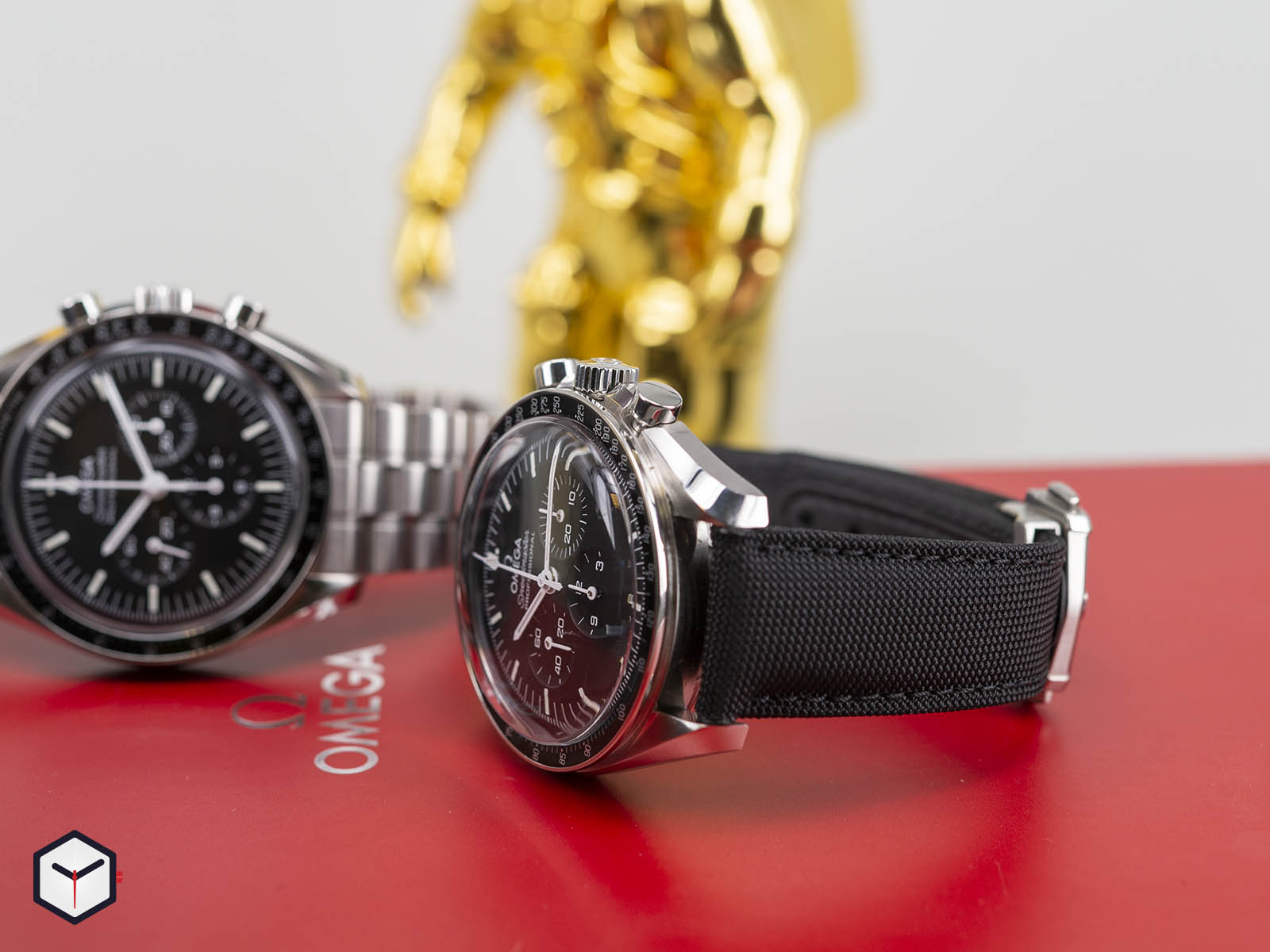 After the movement, the most affected part of the watch from the regeneration operation is the bracelet. Omega, which carries the bar to a point that is very difficult to reach in terms of comfort, wins our appreciation with its new link and clasp design. The only thing that can be said for the sporty look of the model, which is made of nylon fabric and presented with a stainless steel folding clasp, is "extraordinary". Frankly, the first image that comes to mind when I think of Speedmaster Professional is a watch with a steel bracelet, but it's not easy to compete with the comfort of a model with a nylon strap. On the other hand, Omega offers numerous NATO strap options for Speedmaster models, as in its other watches. They're not cheap but, we can't expect one of the best quality straps on the market to sell for the price of a standard textile strap. 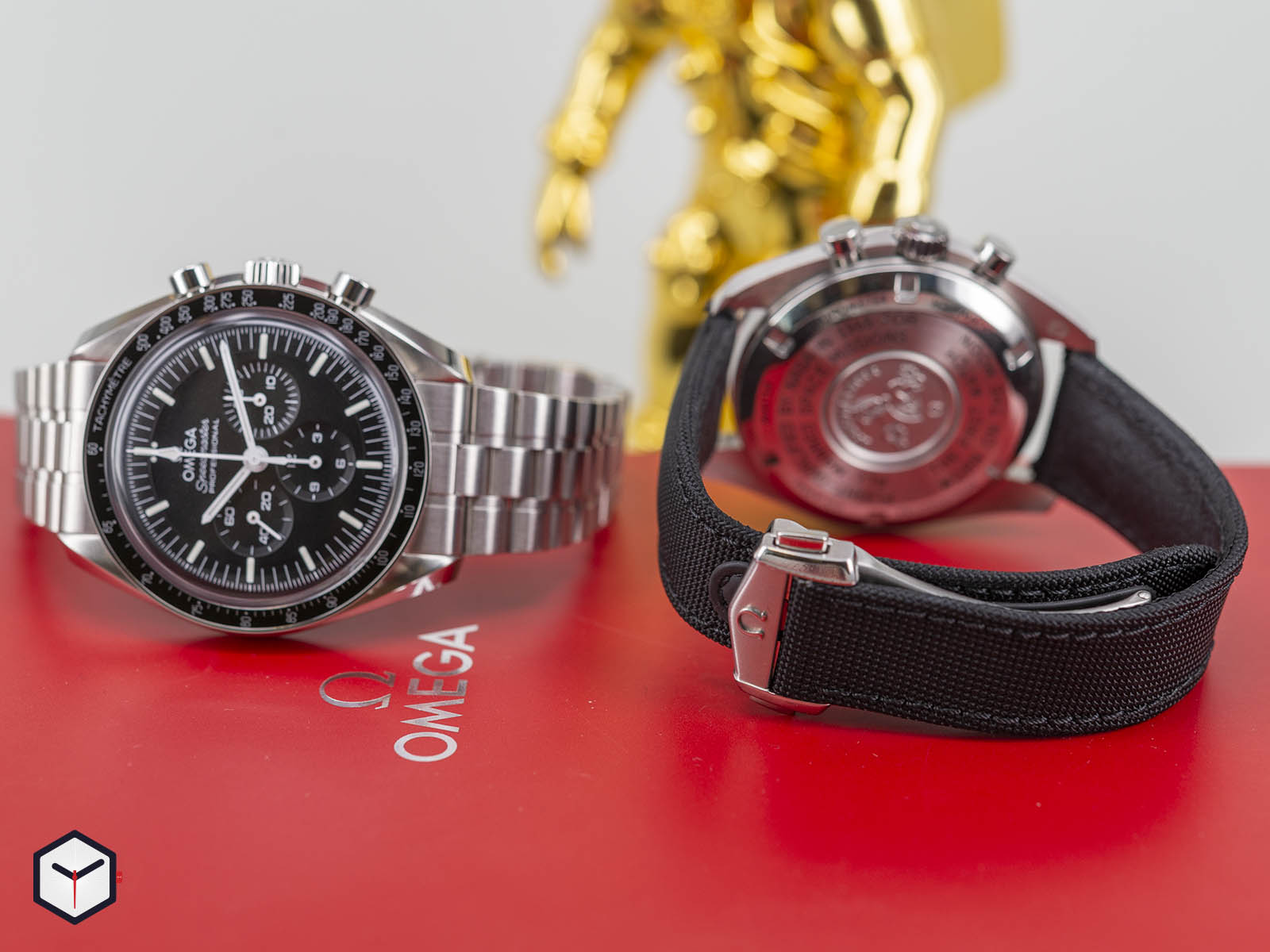 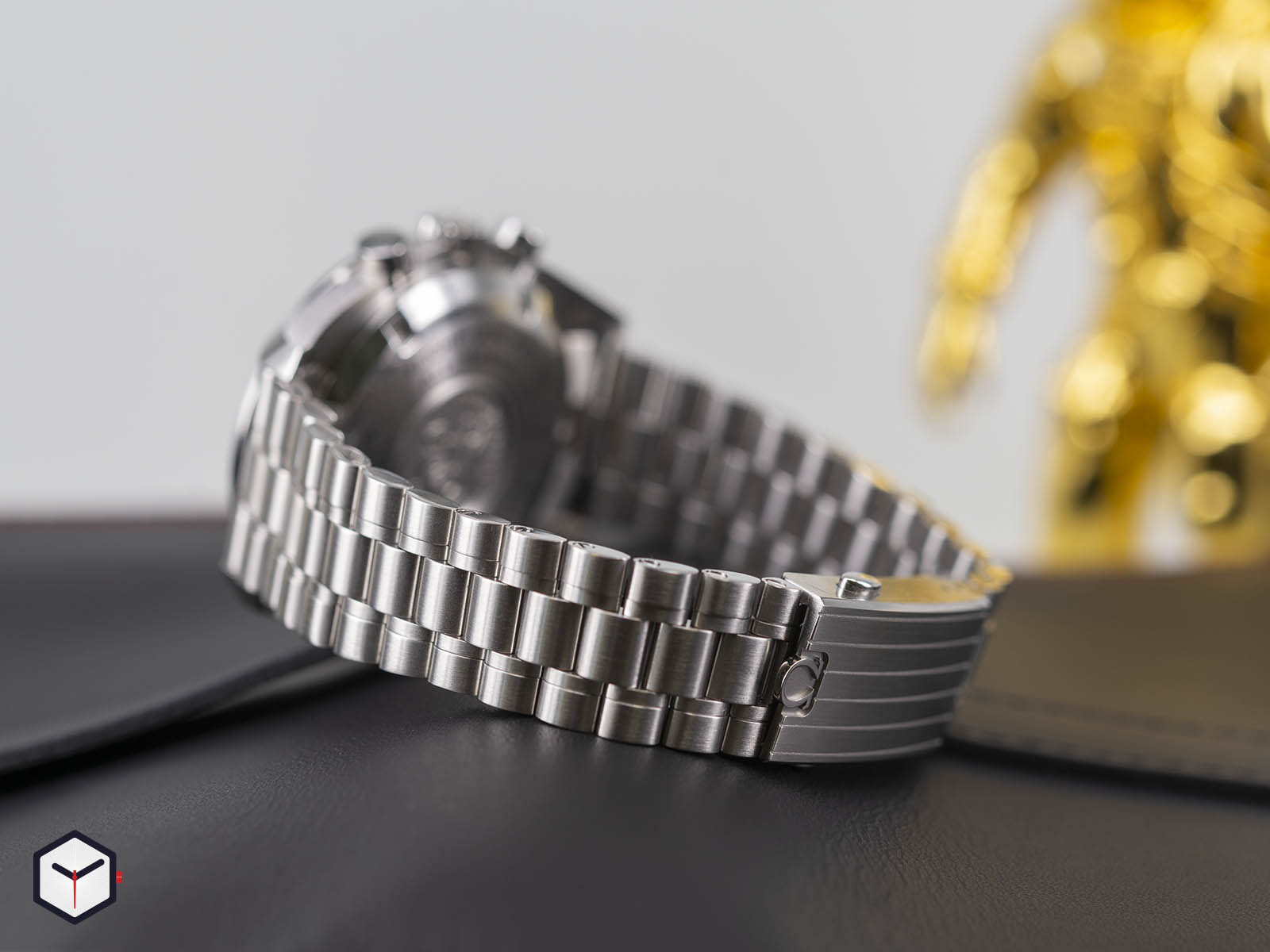 In the old series, it was very difficult to distinguish the models with hesalite and sapphire crystals from a certain distance. In the new series, the edges of the middle links of the bracelet version of the sapphire crystal model are made of polished steel, not brushed. Thanks to this small but striking detail, it became easier to distinguish the models from each other. 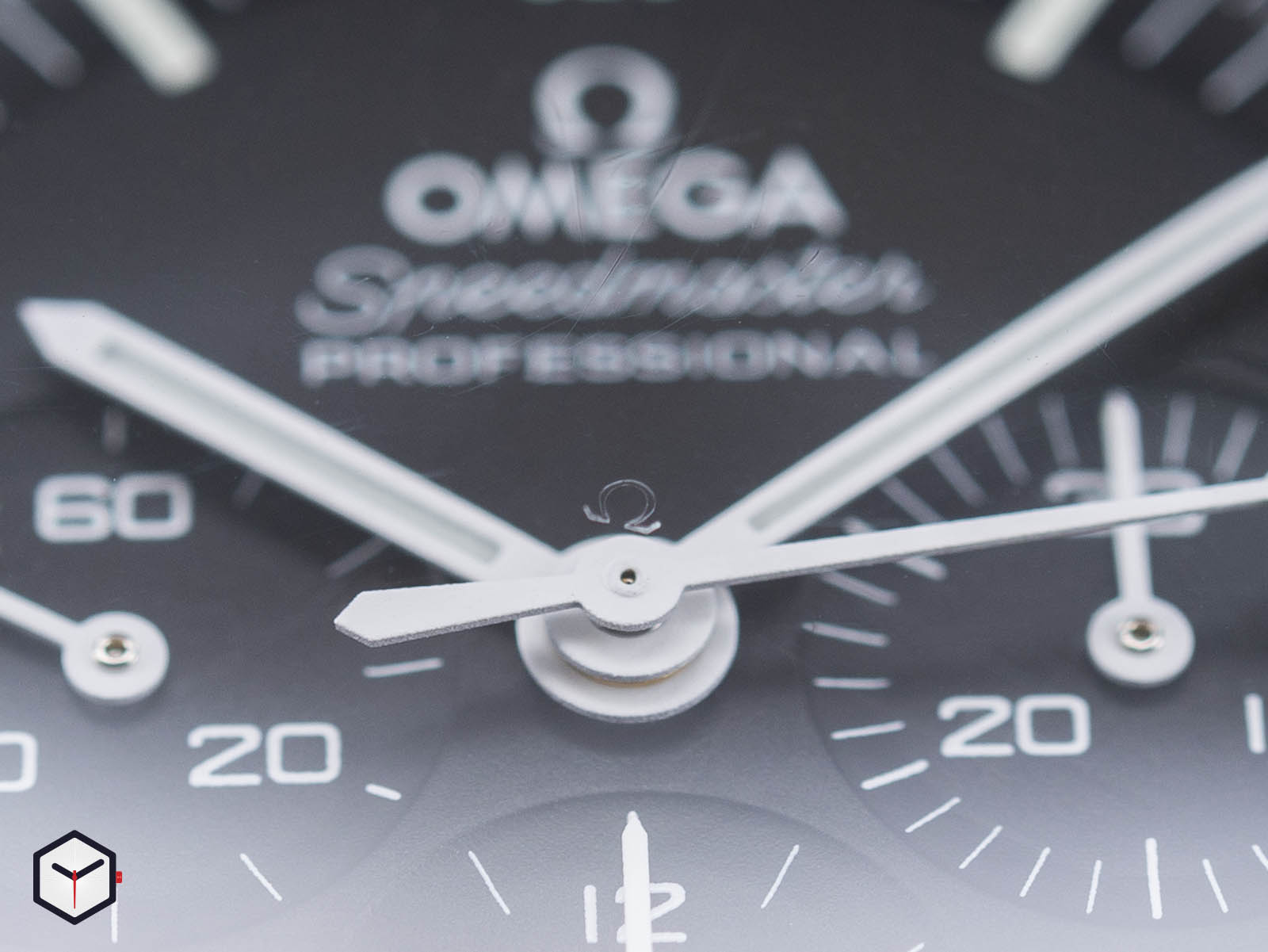 A new movement, a new bracelet, and an affordable price tag considering the category it is in and the quality it offers... Most importantly, you don't have to “wait” to get this watch. 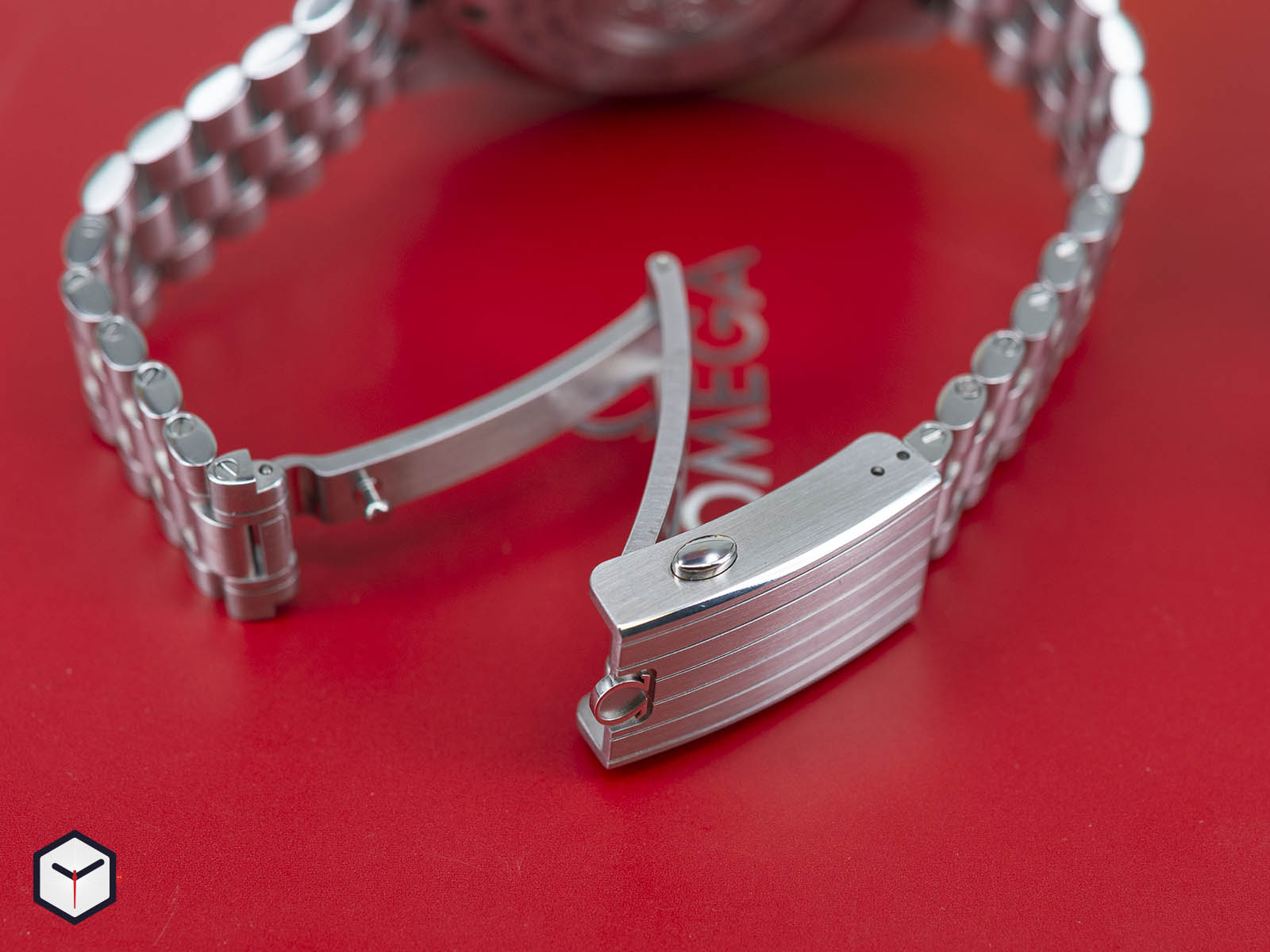 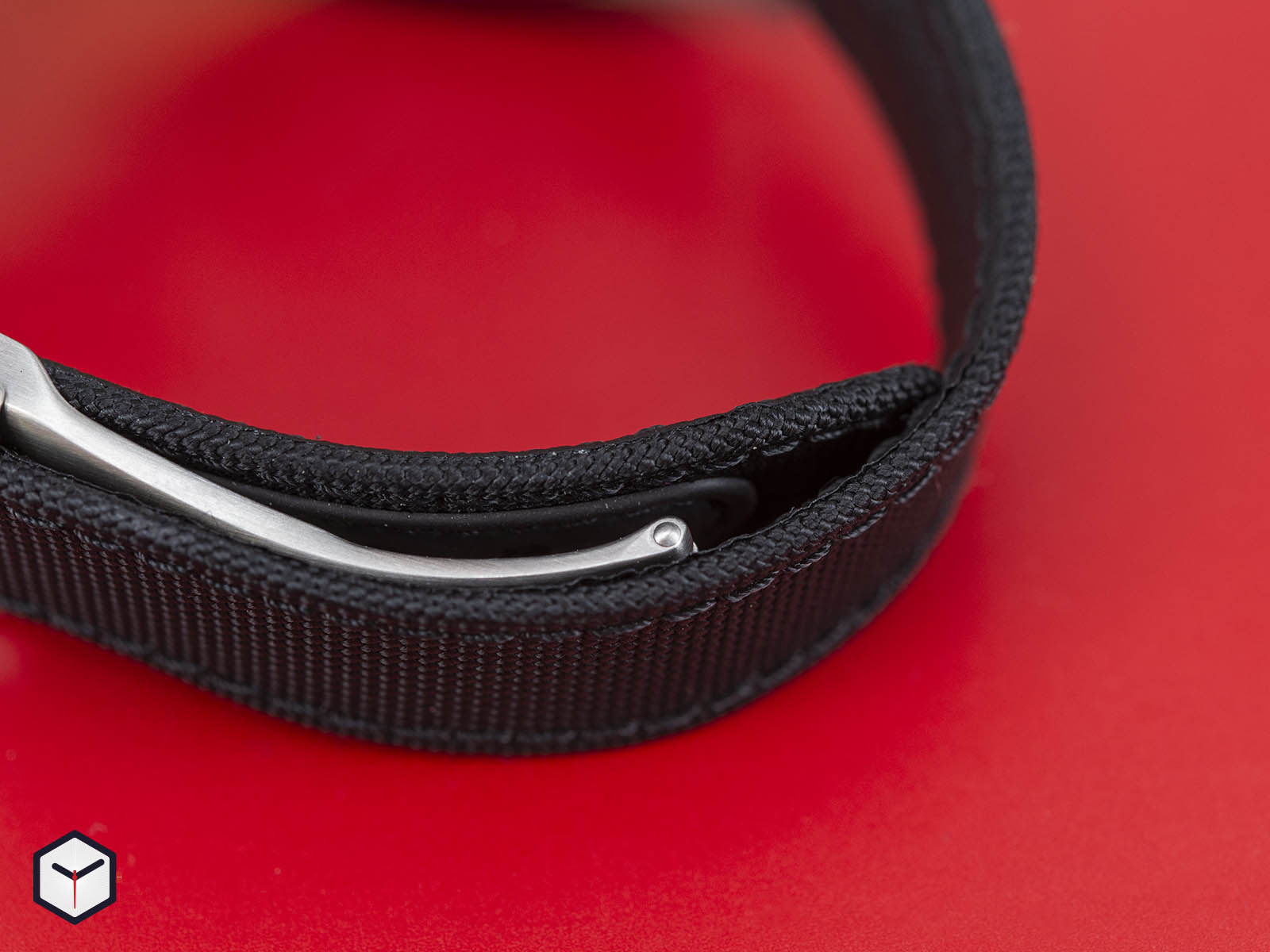