A. Lange & Söhne, one of the German heavyweights of traditional watchmaking, is under the spotlight with the Lange 1 Tourbillon Perpetual Calendar “25th Anniversary”, the flagship of the special Lange 1 anniversary collection. 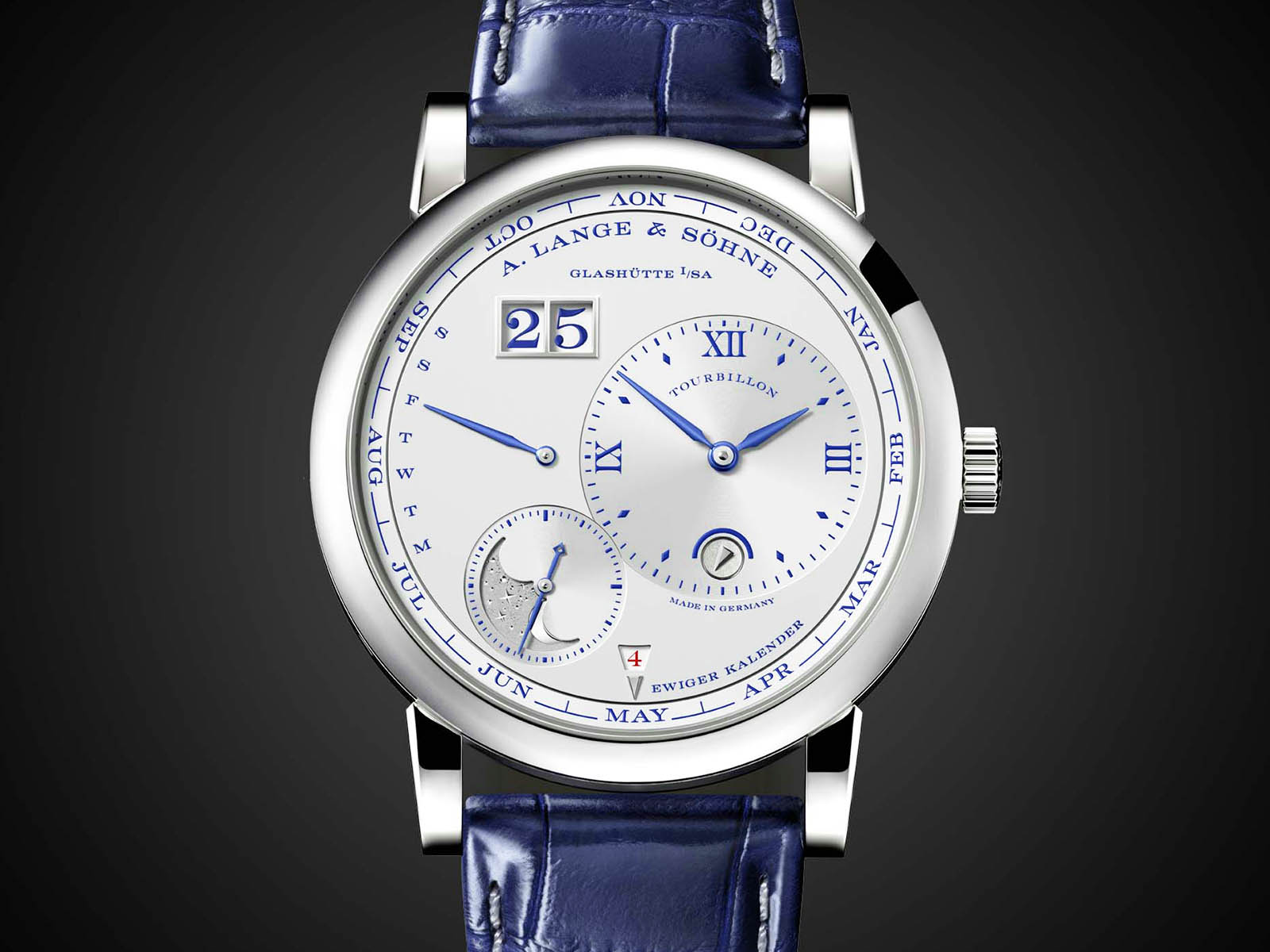 A. Lange & Söhne is celebrating the 25th anniversary of its iconic Lange 1 product line this year with a series of limited-edition timepieces. Here we are with the fourth member of the anniversary collection, Lange 1 Tourbillon Perpetual Calendar “25th Anniversary”. 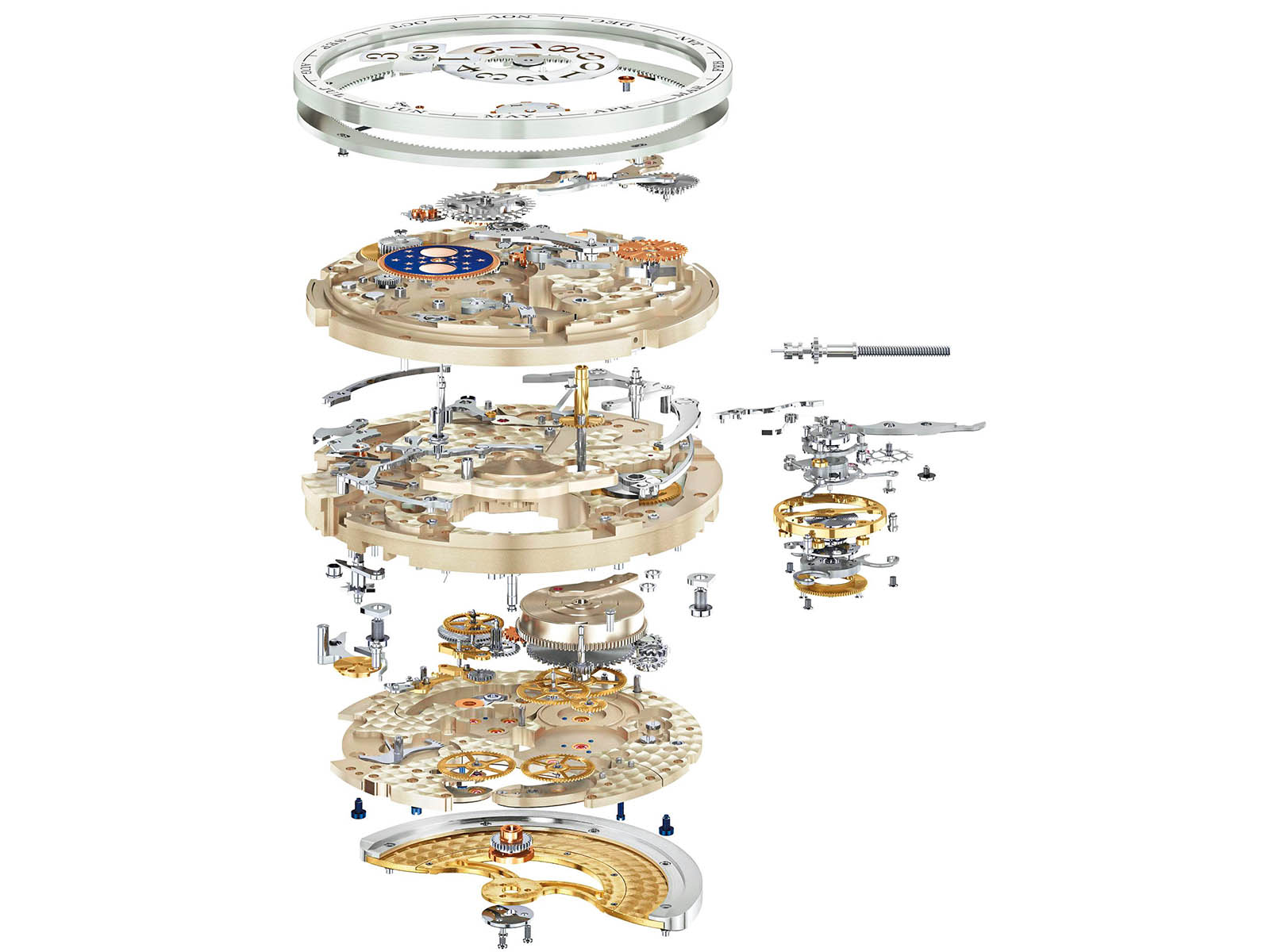 The Lange 1 “25th Anniversary” product line shares the same design language in both aesthetics and materials. Thus, features such as 18K white gold case and blue accents over silvery dial are present in this model as well. 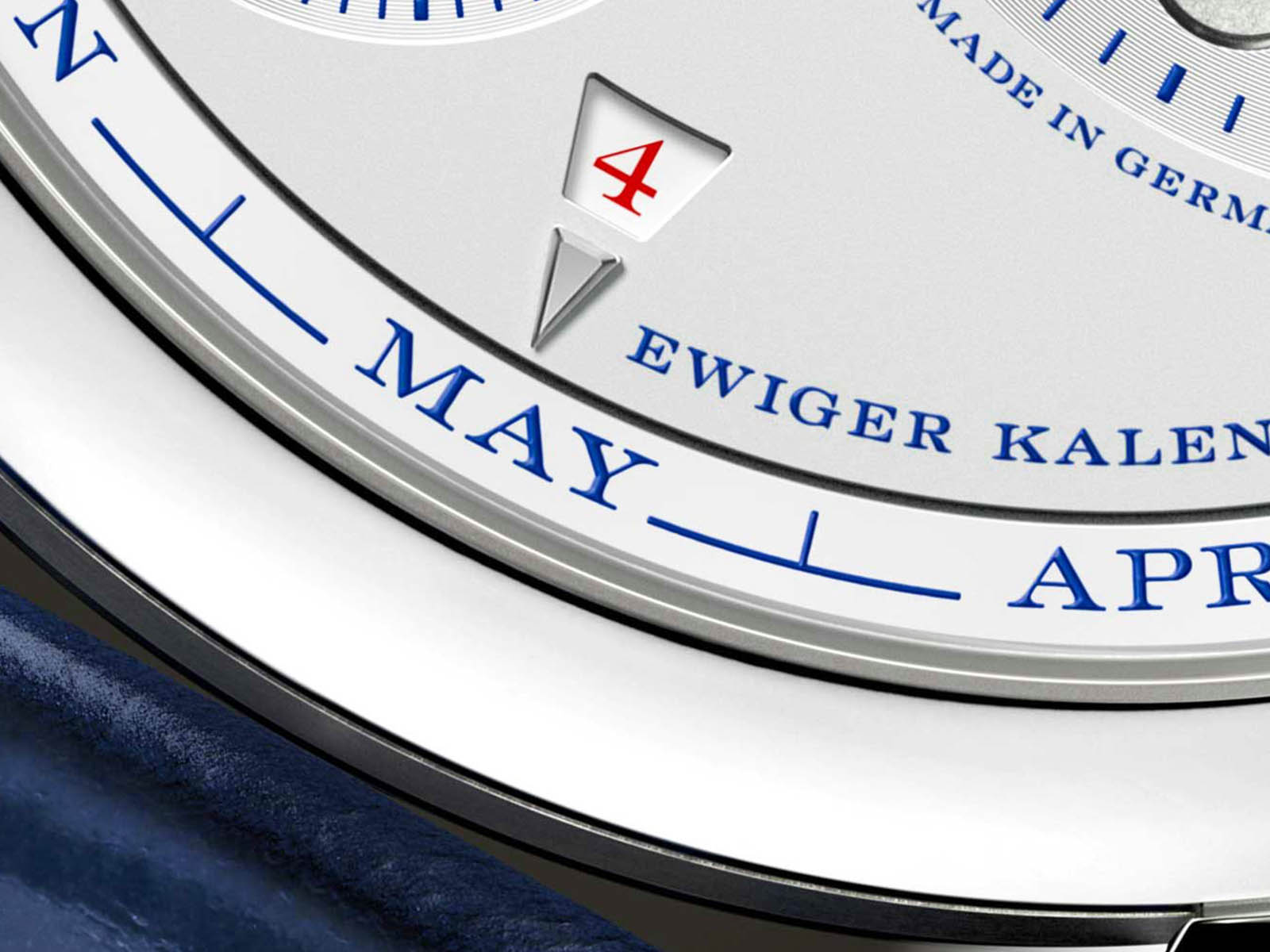 The model comes in an 18K white gold case with both polished and brushed surfaces. Measuring 41.9mm in diameter and 12.2mm in height, the case is equipped with anti-glare treated scratch-resistant sapphire crystals on both sides. Optimally sized at 41.9mm, the case does not compromise its elegance and comfort thanks to the single winding crown, which operates all the functions of the model. 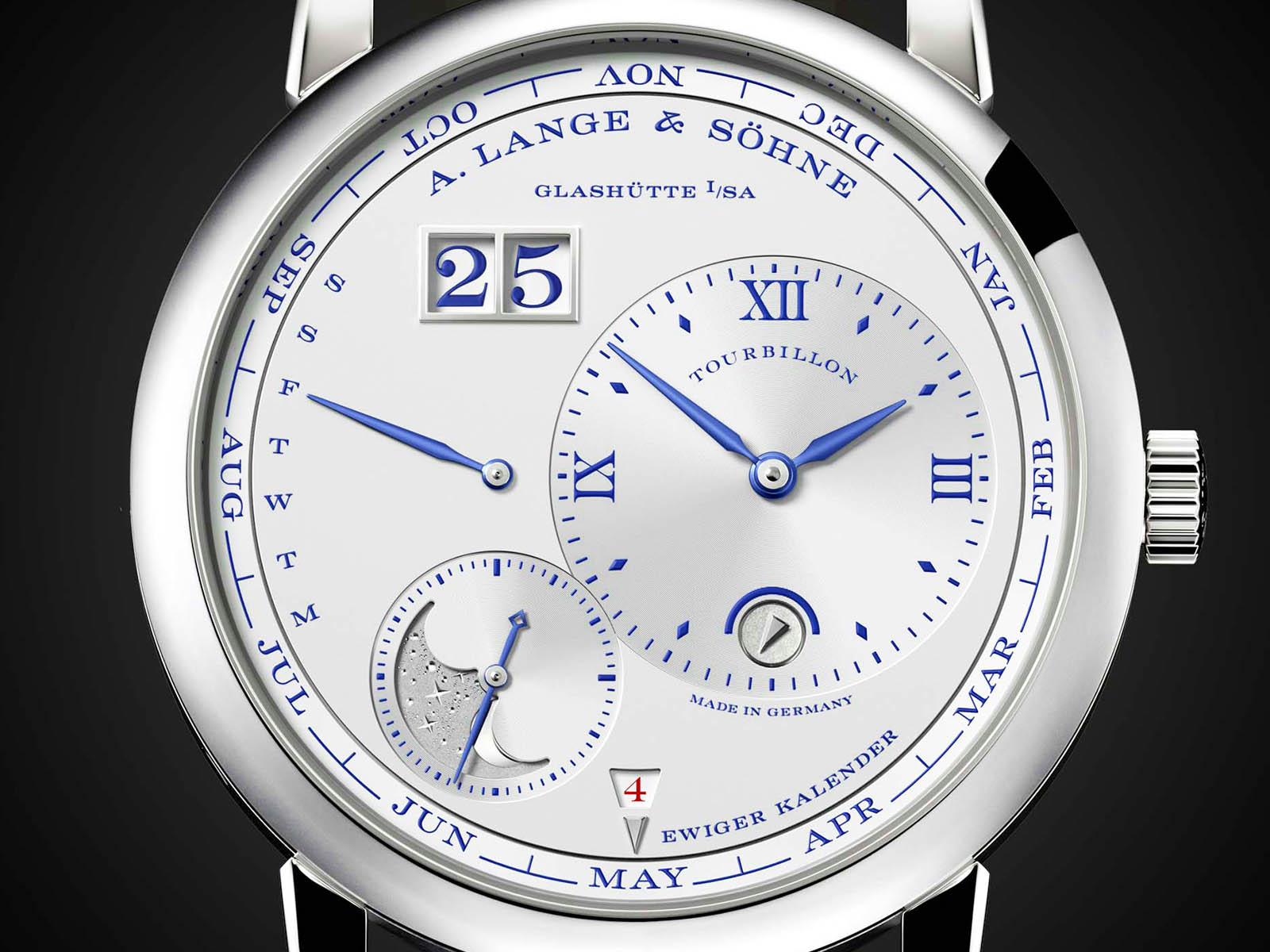 A. Lange & Söhne Lange 1 Tourbillon Perpetual Calendar “25th Anniversary” is equipped with a silvery dial that is accompanied with blue accents, like the other versions in the special anniversary series. Besides the basic hours, minutes and seconds, such functions like perpetual calendar with outsize date, day of the week (in retrograde style), month, leap year, day/night and moon-phase indicator can be monitored by the dial. Despite all those complex features of the model, the dial does not lose its simple and functional appearance and is considered one of the most interesting examples of its kind due to the lack of a perforated section showing the Tourbillon cage. 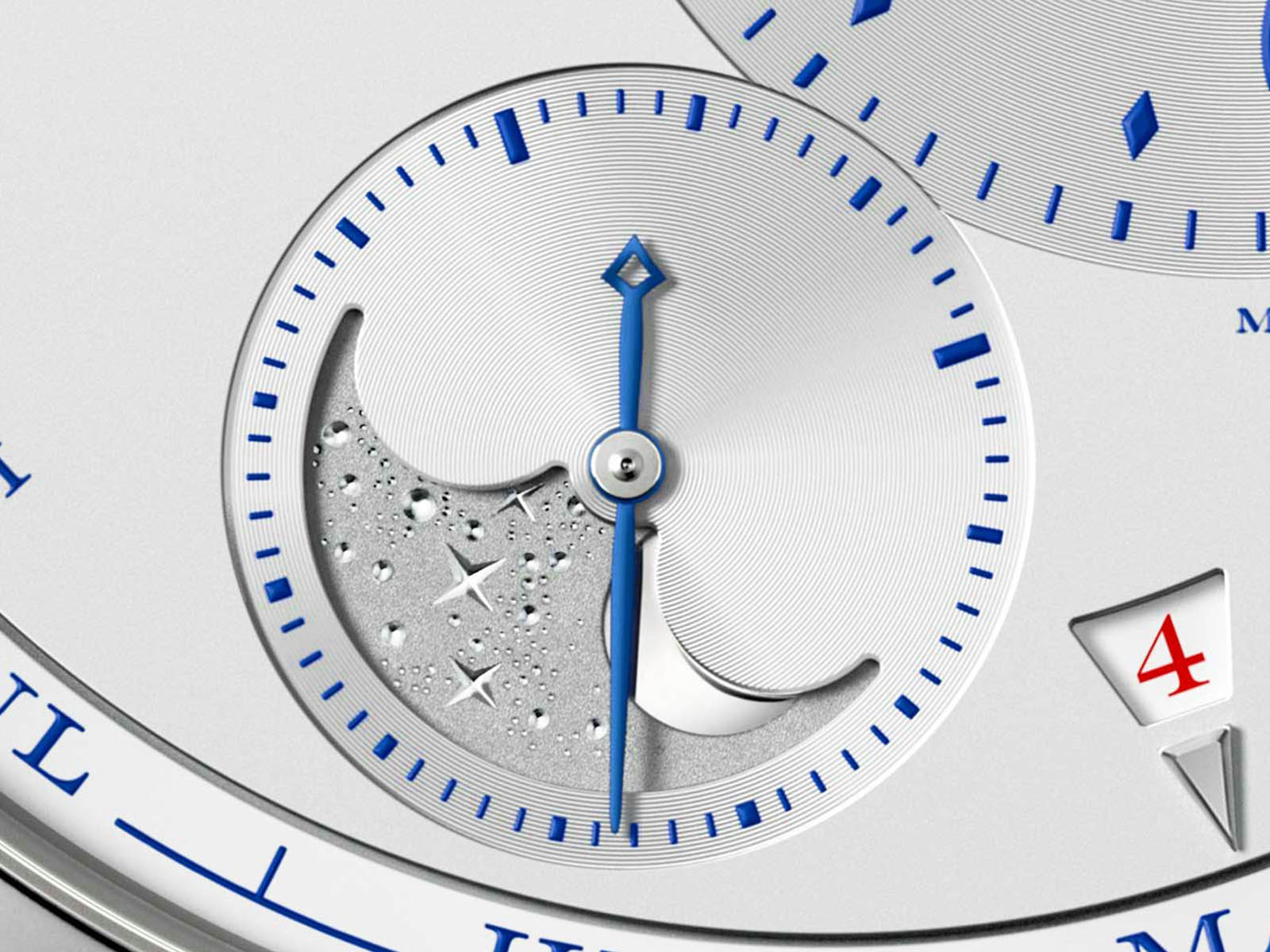 The model is powered by the manufacture Caliber L082.1, which is simply a micro-mechanical wonder. 76 jewels (including one diamond endstone and 6 in screwed gold chatons) / 624 parts self –winding movement beats at a frequency of 3Hz (21.600vph) and offers a power reserve of 50 hours. The Tourbillon itself is composed of 69 individual components and is equipped by the patented stop-seconds feature. Featuring a full-size solid gold oscillating rotor and a balance cock hand-engraved with the number 25 in blue fonts, like the other models in the anniversary collection, the movement shows the brand’s expertise in creating movements in terms of high-end watchmaking. 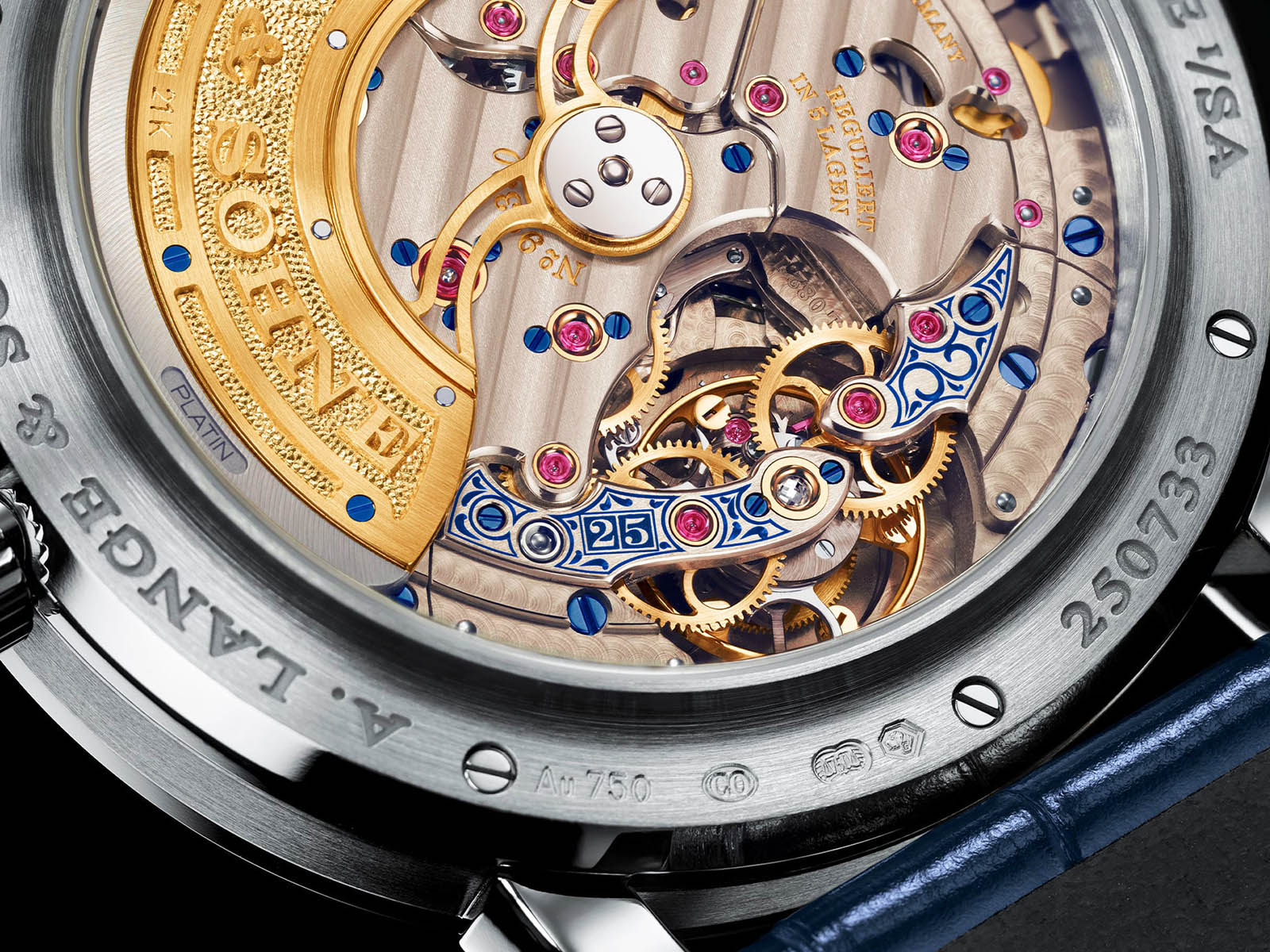 Like the other models in the series, the model is limited to 25 pieces only. It comes on a hand-stitched blue alligator strap with grey contrasting stitching that is secured by a deployant buckle in 18K white gold. The cost of having this special model is EUR 324,500. 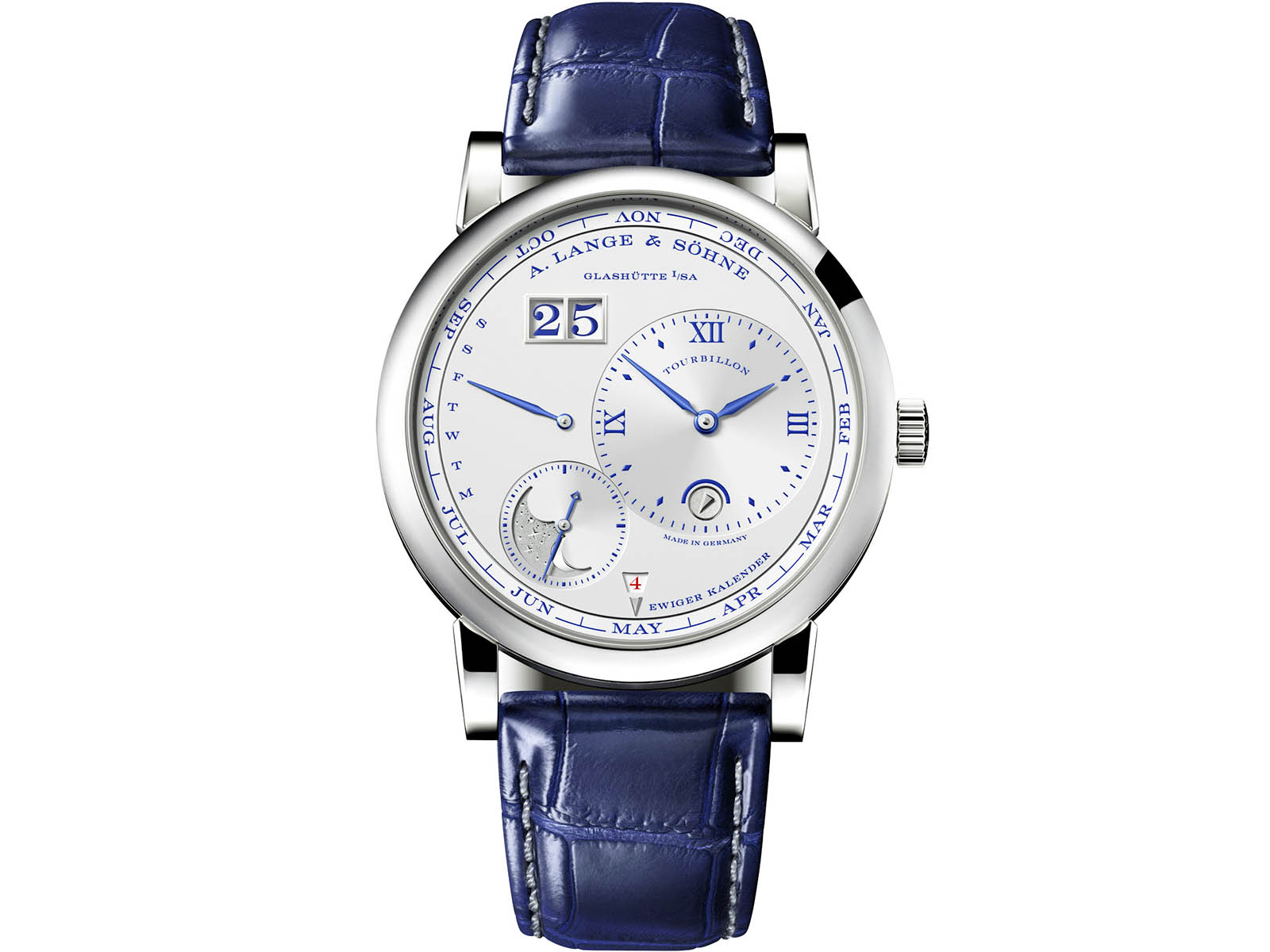 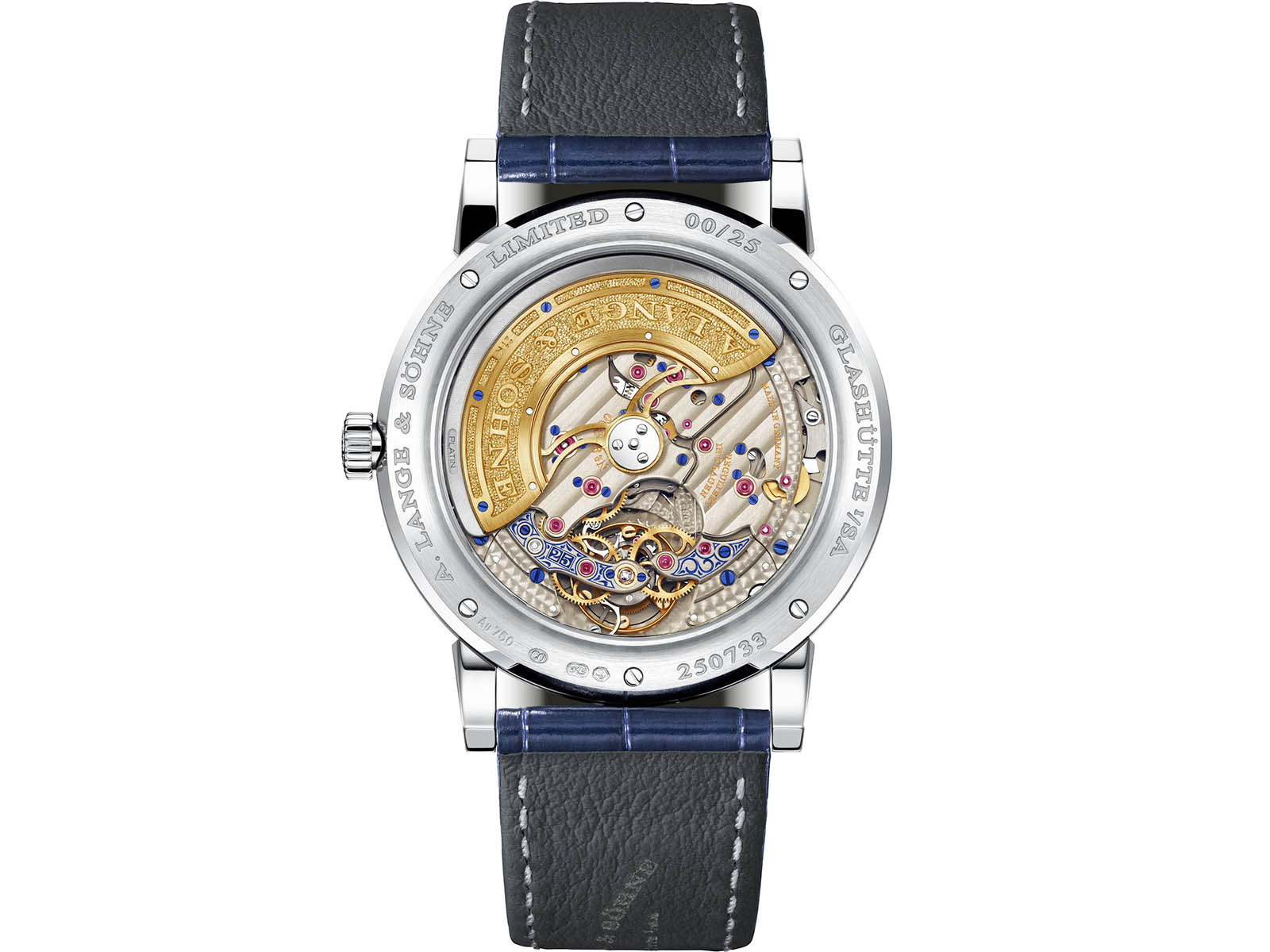