A legend re-born from its ashes: Angelus

Founded at 1891, the La Chaux-de-Fonds origin brand Angelus woke up from its half a century sleep with a pretentious entry to the world of watches. Let’s have a close look at this legendary brand’s history.

Angelus is a brand which was established in 1891 by Albert and Gustav Stolz at Le-Locle Switzerland. The brand pioneered the watch industry via its designs, innovations and some remarkable complications. The Stolz Brothers were also the students of Henri Sandoz which was the founder of the brand Tavannes. The fellow enthusiasts with a great knowledge of history of watches surely recall the name by a group of significant successful tasks. The brand gets the third brother Charles Stolz in charge at its 7th year. 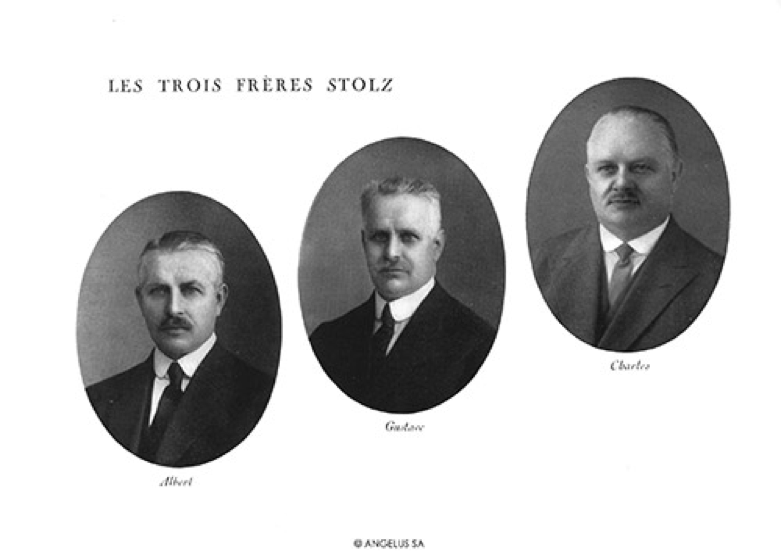 Three brothers employ 15 highly talented watch makers and start manufacturing base ( ebauche ) movements for hi-end complication watches of the time. The brand succeeds in such a short notice. Their success is approved by the several prizes given by international authorities.

The brand, which specializes in the repeater function pocket watches created for the soldiers of WWI with lost or damaged eyesight, attracts attention with repeater and alarm function desk clocks.

Angelus manages to produce its first monopusher chronograph at 1920s. The brand keeps winning the prestigious awards of the industry thanks to its highly precise and brilliantly crafted products. 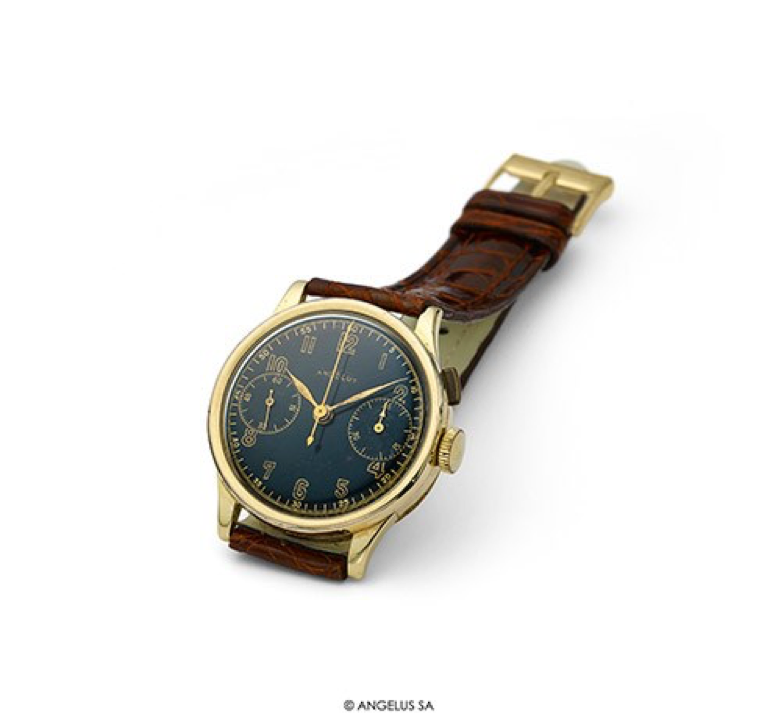 At 1930s, Angelus gets many appreciations with their power reserve indicator function models which are still above today’s standards. Their 8 days power reserve model with the smallest movement of all times back then marks the era with its record breaking dimensions and +8/-8 scn/day accuracy. 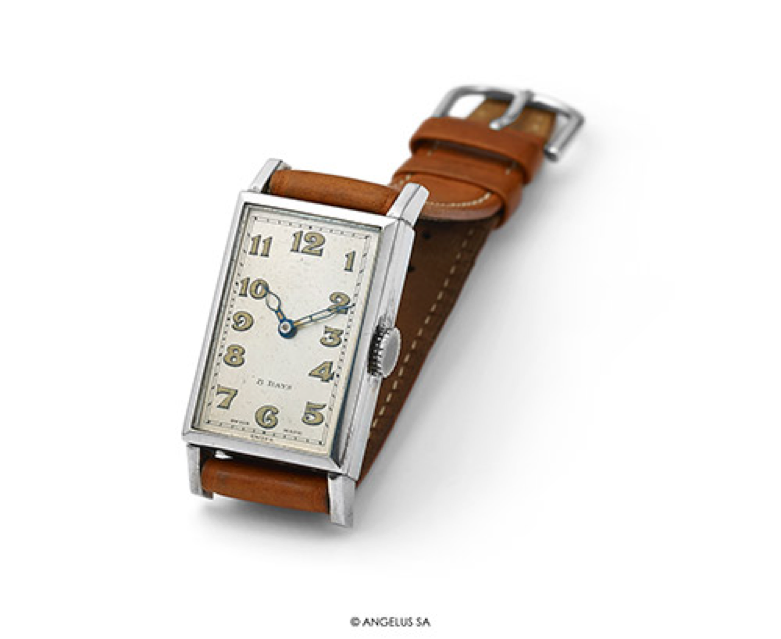 The brand produces double pusher chronographs in the following year which makes it a challenging rival against brands like Breitling and Universal. 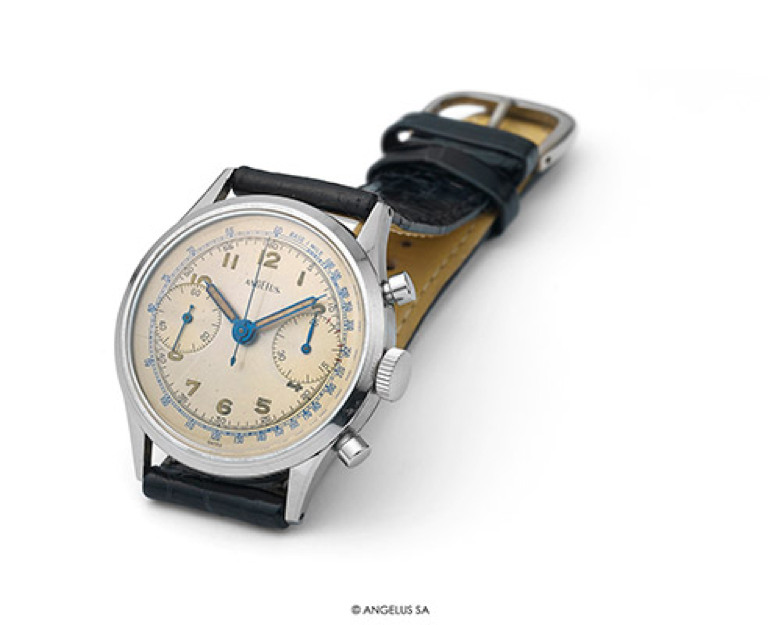 Angelus presents its 8 day power reserve movement with alarm function ( SF240 ) in 1936. This movement is actually quite important for Paneristi like me as the non-alarm version of this movement is used in the Radiomir and Luminor models of Panerai during 1950s. The massive size of the movement ( as it was designed for a desk clock originally ) was not a problem at all inside the 47mm diameter cases of Panerai. 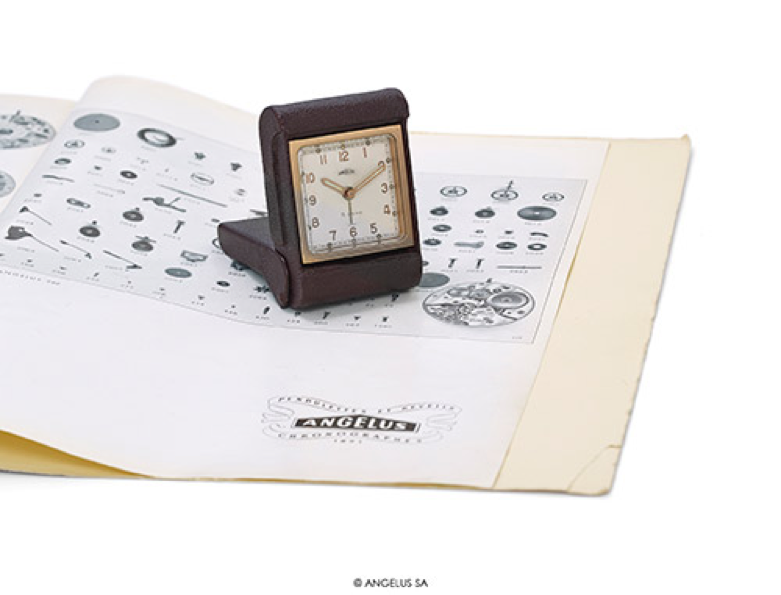 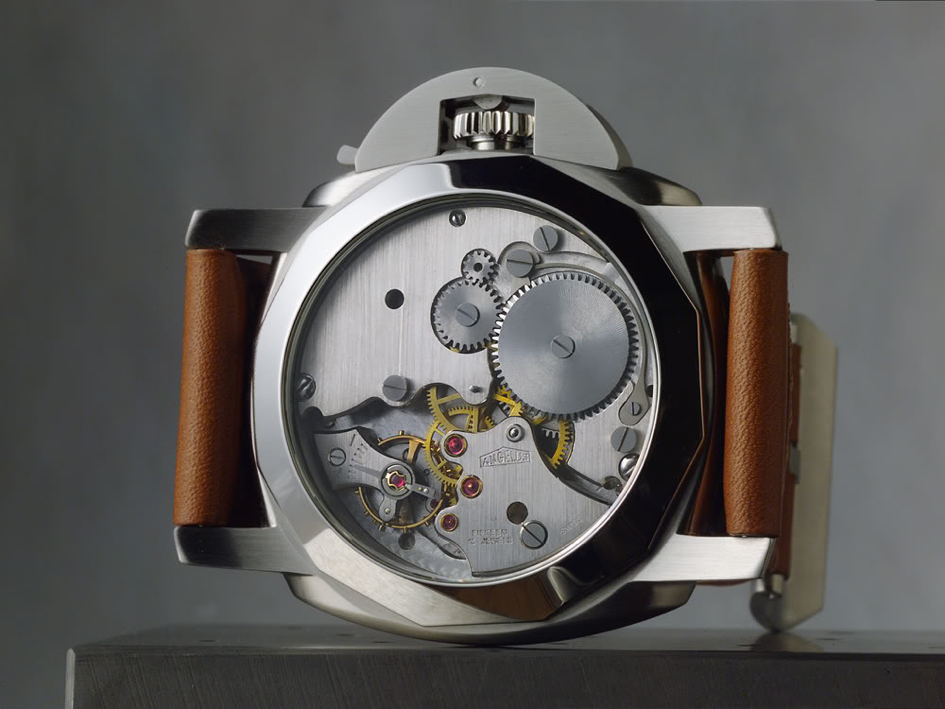 In 1941, the  brand celebrates its 50th anniversary within the industry as a major name employing a work force of 90 people, with a marine complication model featuring an 8 days power reserve movement, calendar, barometer, thermometer and hygrometer. 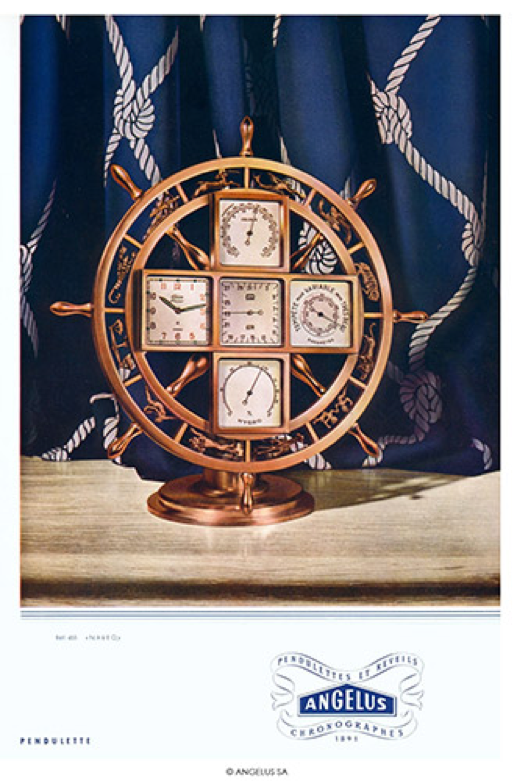 In 1943, the brand launches the first calendar function chronograph wrist watch which will bring a great success at the market. 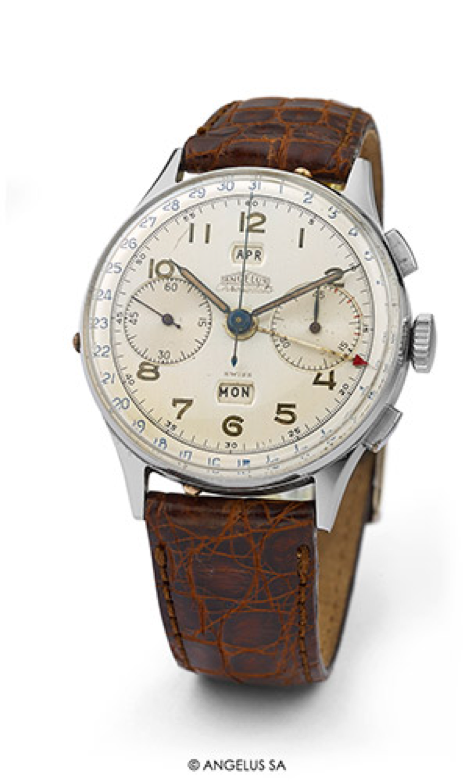 In 1943, the brand co-operates with Panerai again by supplying movements for the bi-compax Mare Nostrum which was designed for the high rank deck officers at Marina Militare. 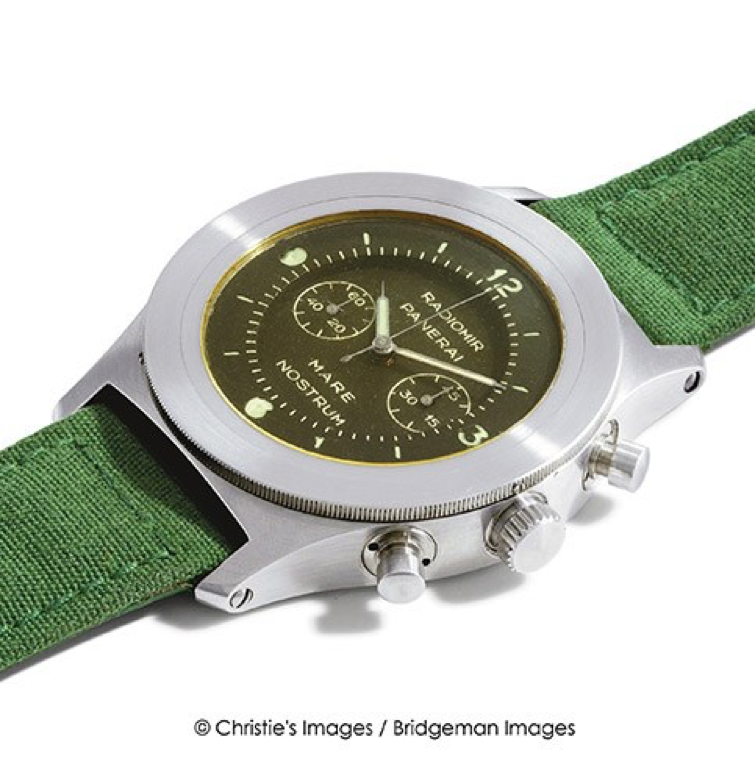 The brand adds another first and launches the Chrono-Datoluxe model with a chronograph movement featuring the big day & date display. 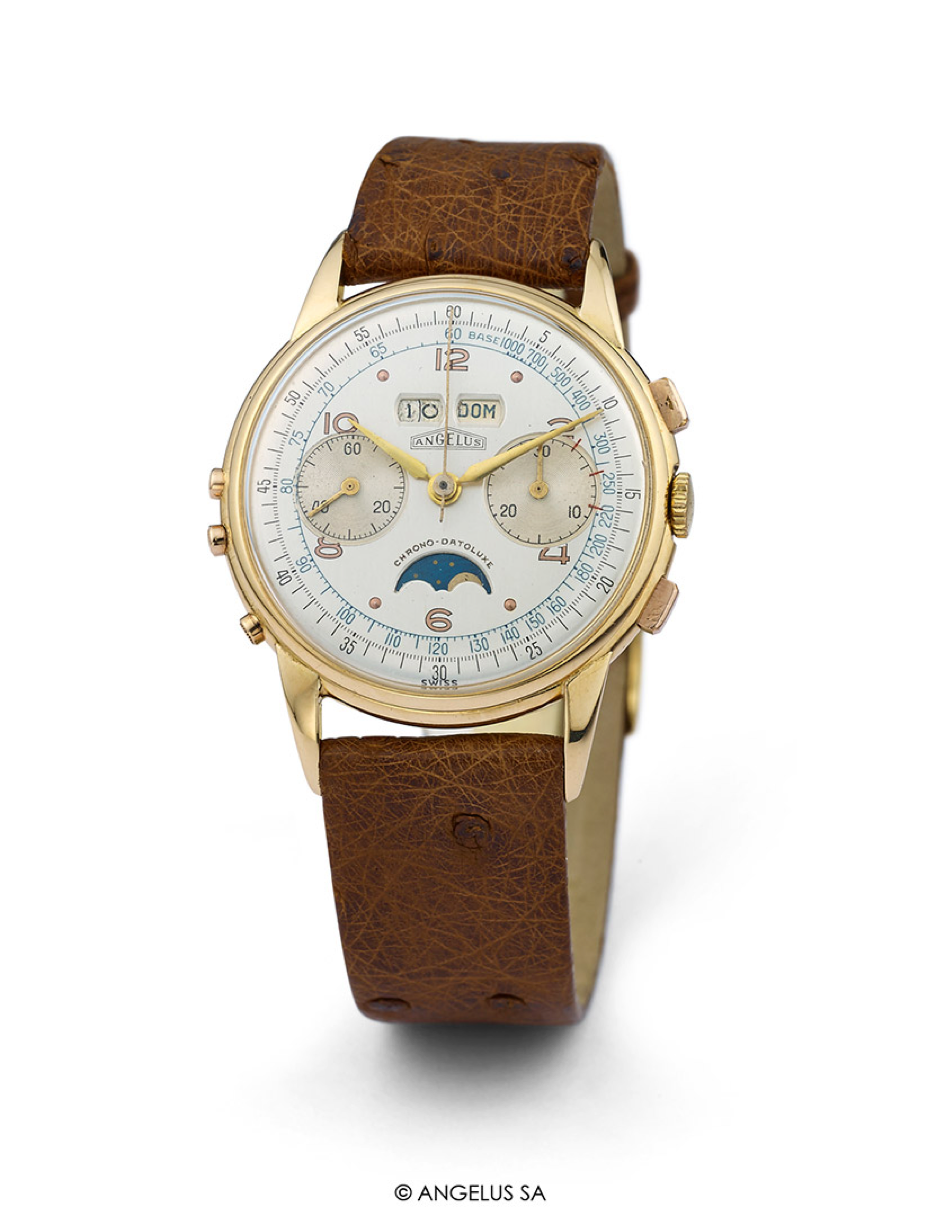 In 1958, Angelus presents the world’s first water sealed automatic repeater wrist watch named as the ‘’Tinkler’’. With its limited production of 100 pieces only, Tinkler becomes an instant collector’s item. 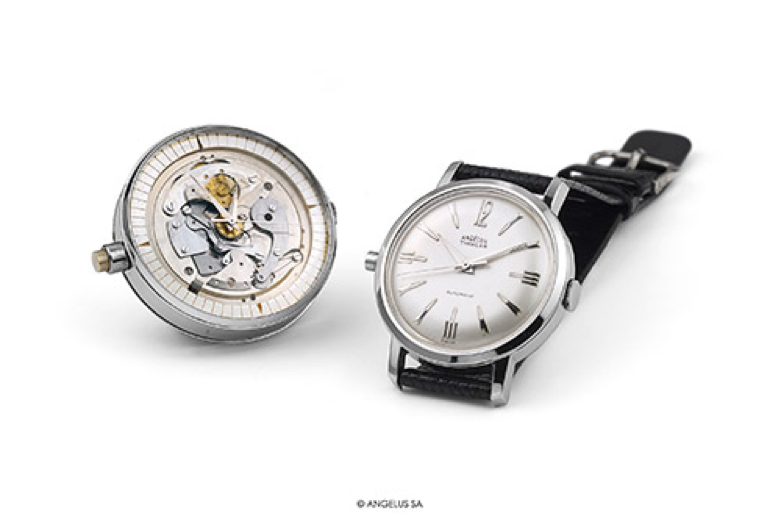 In 1960, the brand launches its last chronograph watch which was specially designed for doctors. 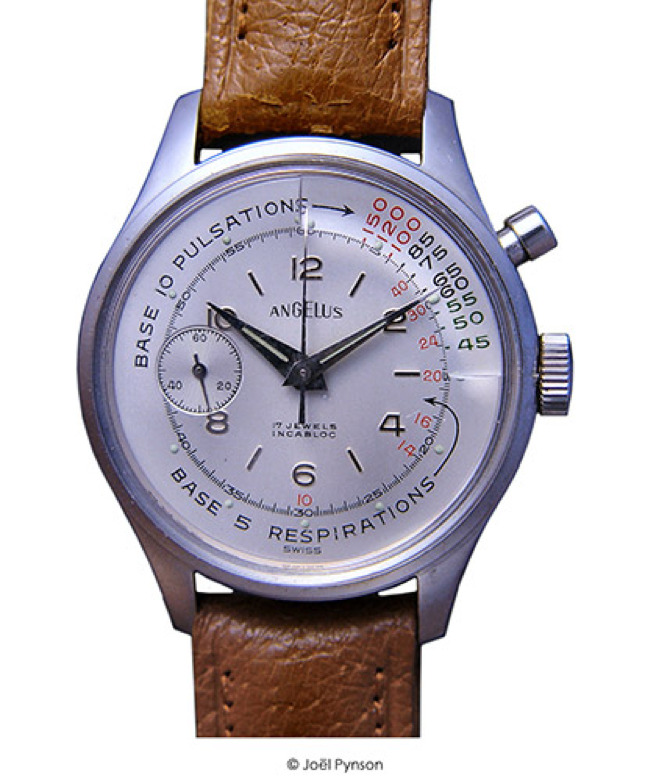 The brand gives a long break after its last production until its Dubois Depraz based new minute repeater however, the glorious days doesn’t come back and Angelus gets its place in the history of watchmaking due to the Quartz Crisis.

In 2011, Angelus is brought back to life by La Joux-Perret featuring Frederic Wenger in the CEO position. After a frantic four years of work, the first model takes stage at Baselworld 2015. The U10 Tourbillon model offers arguably the most exotic design in the market. 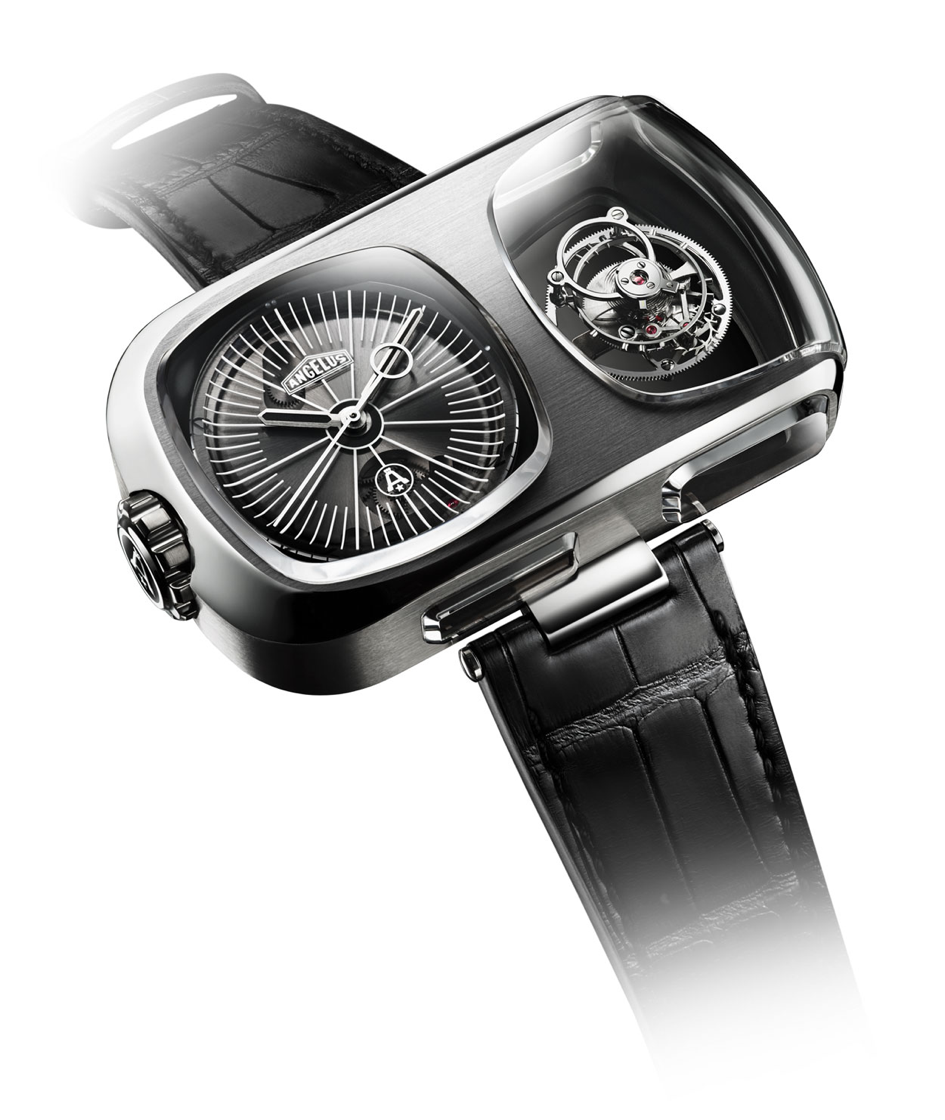 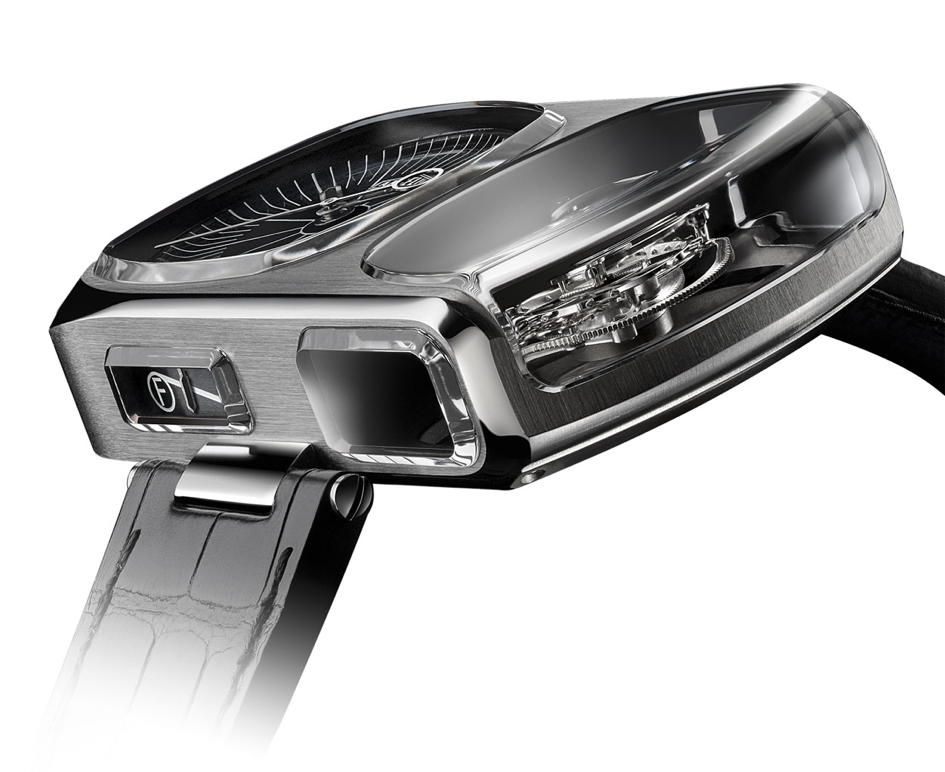 The extra ordinary design clues make us position the brand in a totally different place. The desk clock and chronograph manufacturer of the past, now became a hi-end exotic watch brand.

Angelus kept the same concept with three different models presented at Baselworld 2016. Ultra Skeleton Tourbillon, U30 Tourbillon Rattrapante and U40 Racing Tourbillon Skeleton proved the brilliant transformation of the brand that is became the new Pioneer in combining hi-end watch making values with contemporary and sporty designs. 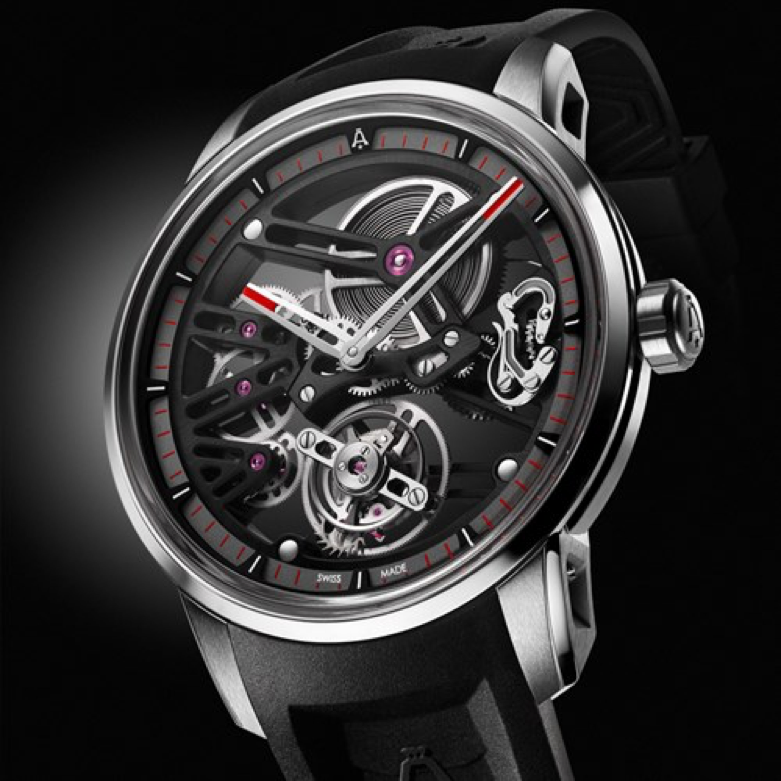 For some watch enthusiasts, this transformation is above acceptable limits. In fact, I feel the same way. It is obvious that what we see is not a part of Angelus DNA. It looks like a brand new and modern approach built on a traditional watch making milestone brand. 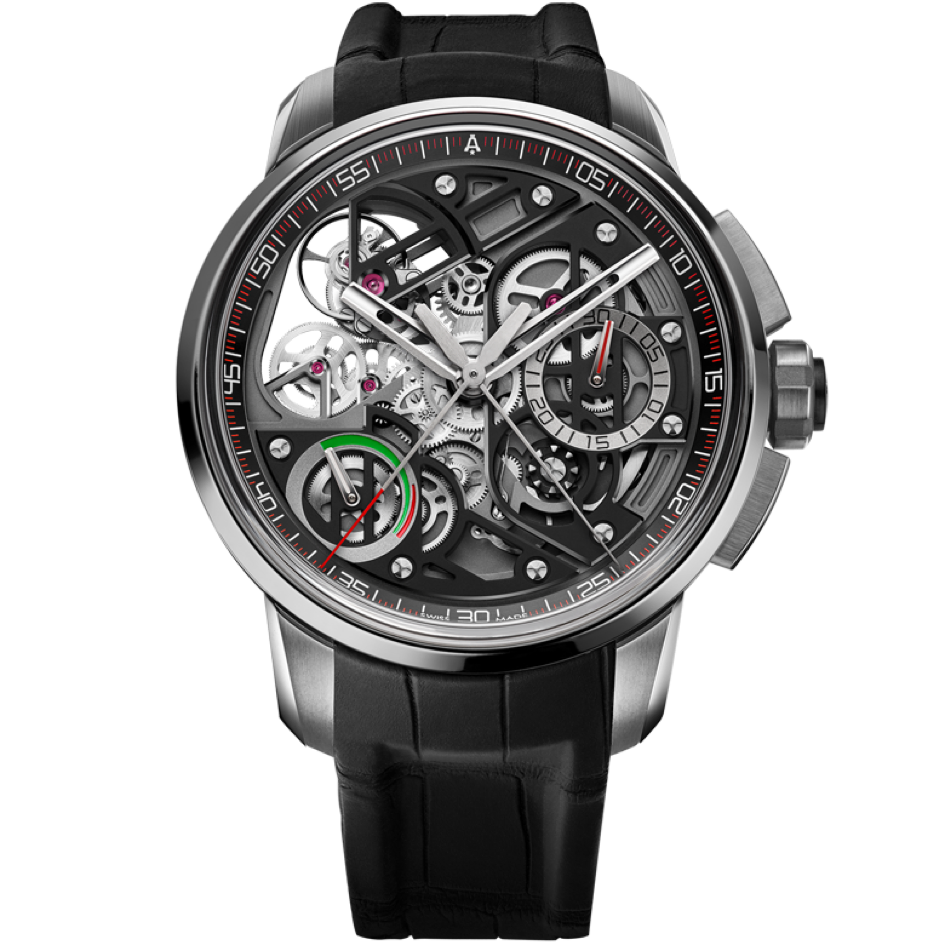 On the other hand, it is a good thing for us to see a new player in the hi-end futuristic products league dominated by MB&F, Urwerk and HYT. Despite the top end price range ( parallel to the level f quality and craftsmanship ) what we see here is a group of fascinating and unique timepieces.