From Yesterday to Today: Breitling Superocean

Let's face it, we love diving watches. The Breitling Superocean model is one of the watches that made its mark on the underwater world with both its design and functionality. Here we share the idea, philosophy, and development of the Superocean with its enthusiasts. 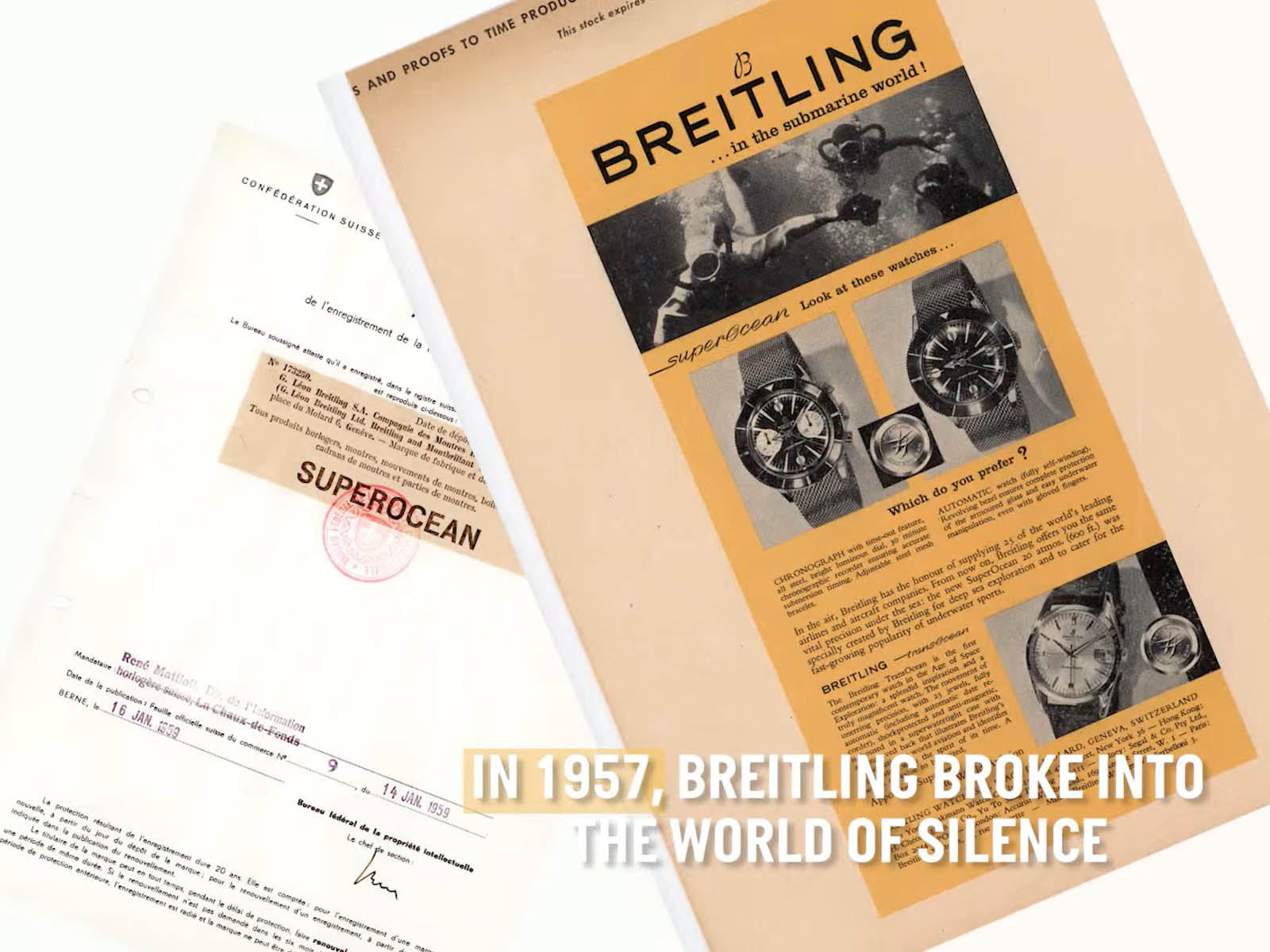 In the 1950s, the demand for diving watches had increased due to the basic needs of sea exploration and professional diving. Increasing interest in water sports and the fact that amateur divers go for exciting excursions underwater have created the need for a reliable instrument to accompany them. 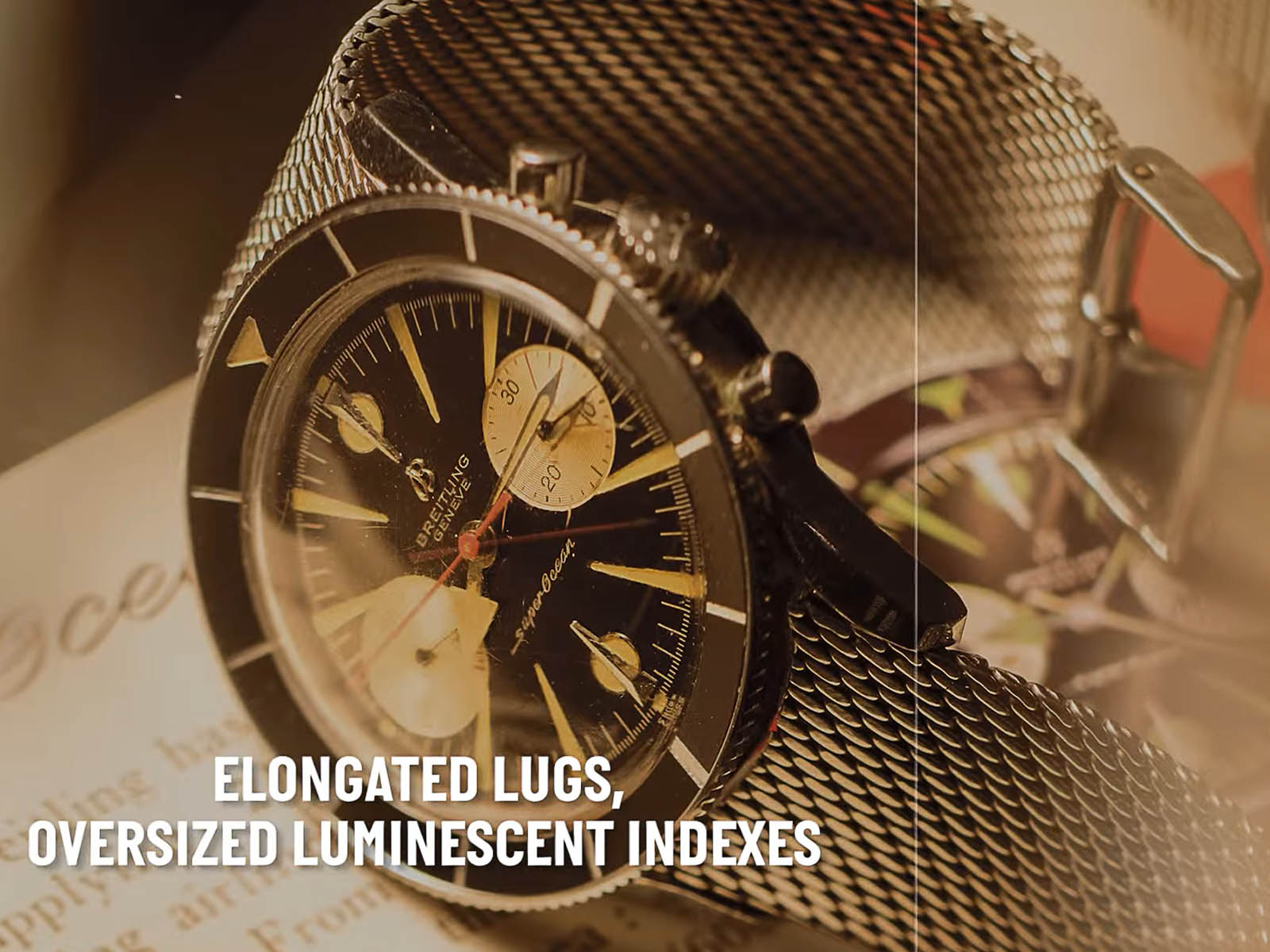 When the calendars showed 1957, Breitling introduced two dive watches, a three-hand (Ref. 1004) and a chronograph (Ref. 807). These watches, called Superocean, were created for gentlemen who care about their style, even on the beach, and experienced divers who need a watch for performance and reliability.

These two Superocean models not only resisted 200 meters of water pressure but also attracted attention with their different designs. “Leitmotif”, which characterizes elegance and performance from the beginning in Breitling models, also showed itself in these watches. The brand, which is very experienced in producing extra legible console instruments in the aviation field, has also increased the legibility of Superocean with its large circular and triangular hour markers. 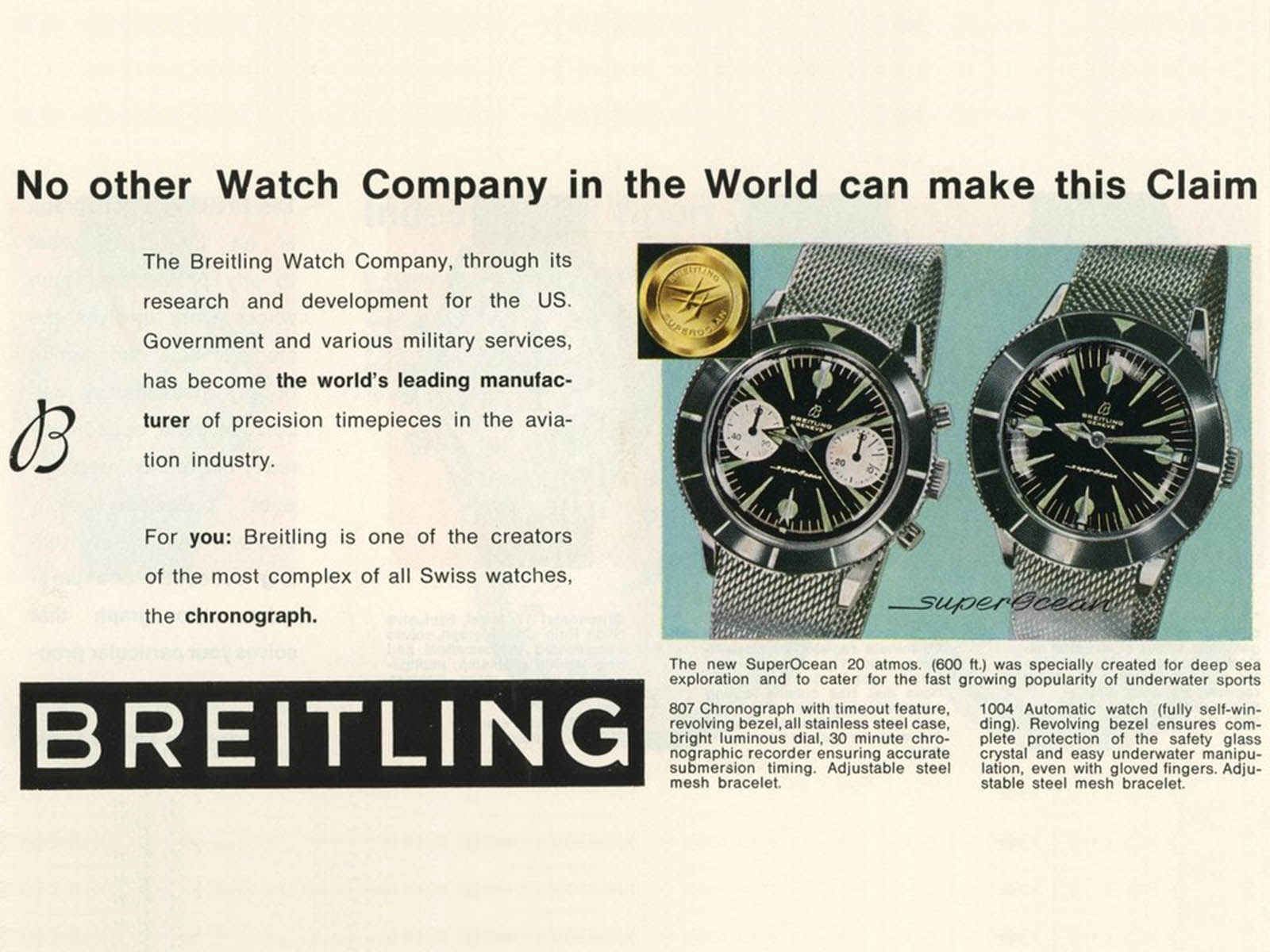 Breitling added a concave rotating bezel over its legible dial, instead of the flat black disc that was commonly used at the time. The 39mm stainless steel case was accompanied by elongated lugs to keep it perfectly flat and comfortable on the wrist. 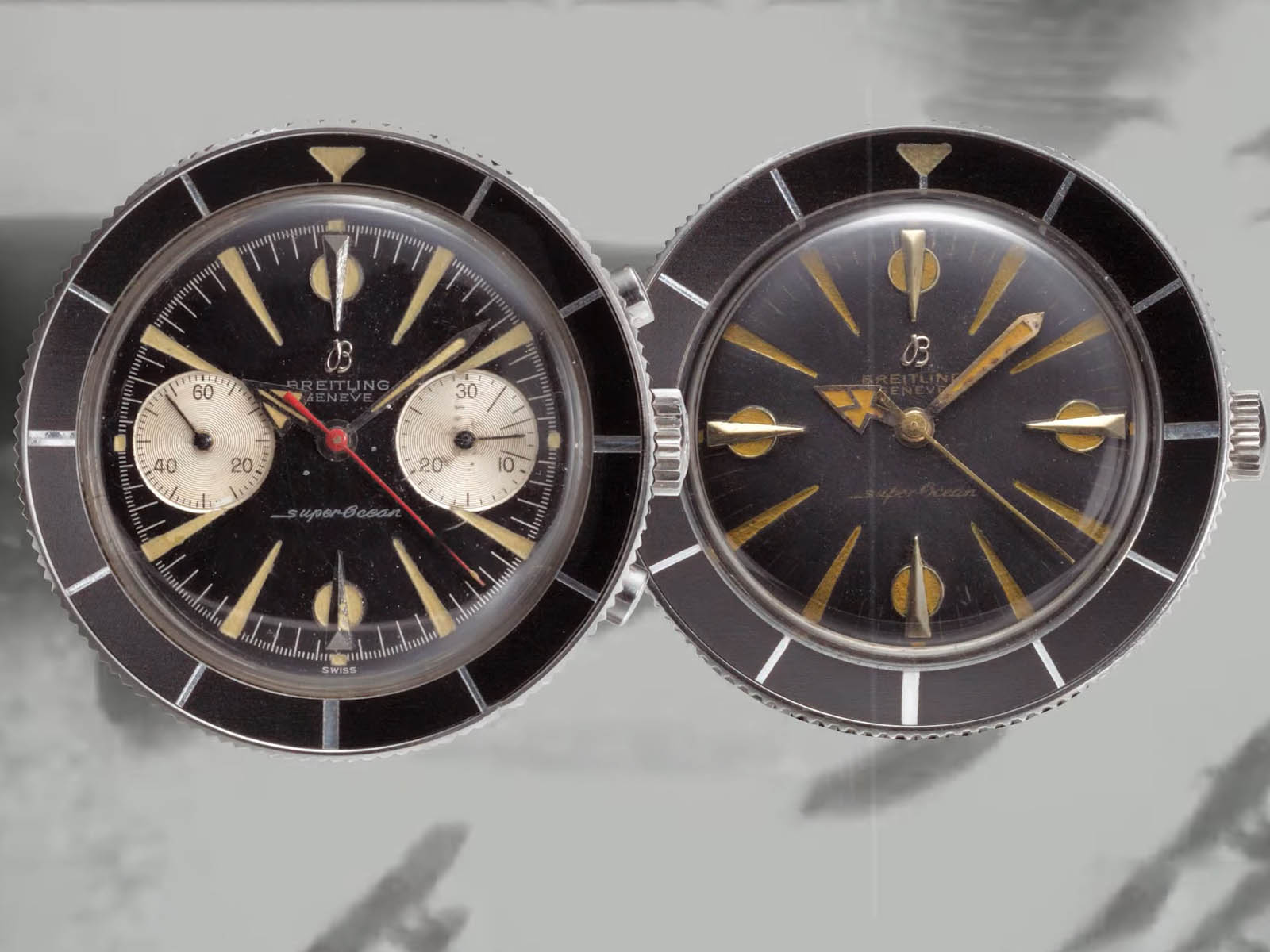 By the mid-1960s, Breitling began to think again, "What can we do more for Superocean models?" Based on the success of the first Superocean chronograph, Willy Breitling wanted to improve the technical aspect of the diver's watches and offer a new chronograph that allows easy and safe reading of the dive time, even in deep oceans. 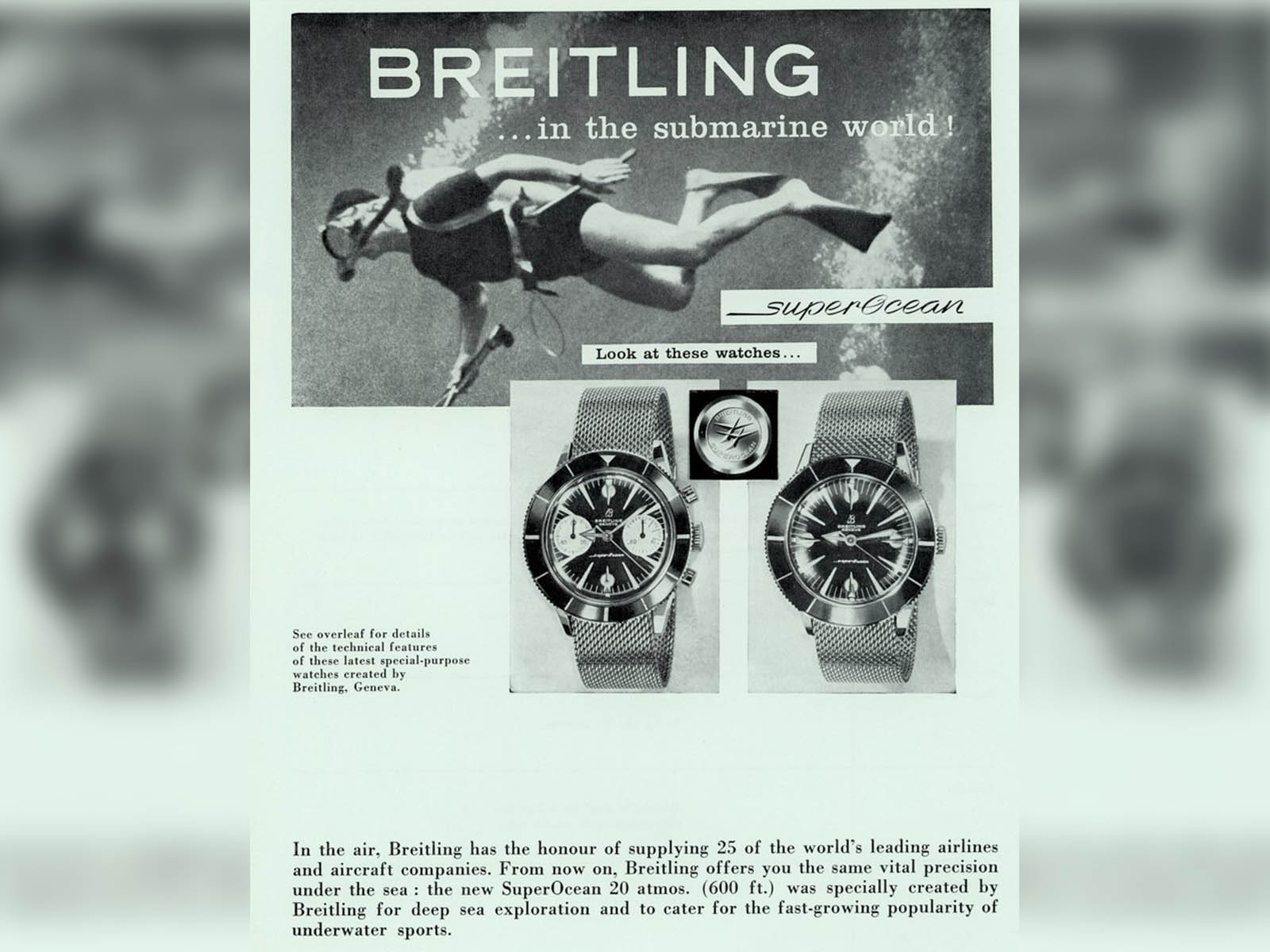 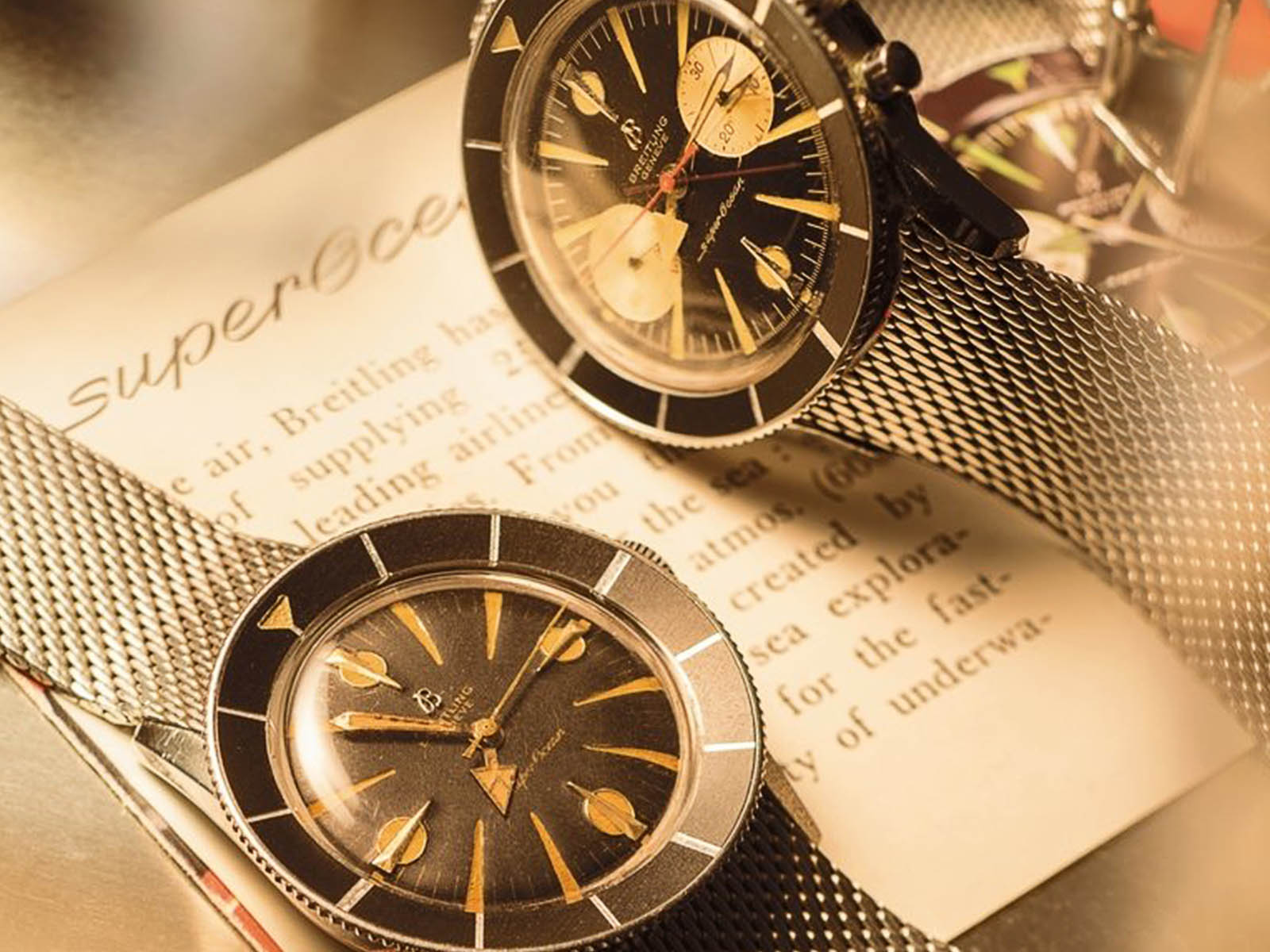 Willy Breitling produced a technical solution to this problem and added an indicator to the 6 o'clock position. When the chronograph is started, the indicator displays a yellow disk, when put on hold, a yellow dot appears on black, and when it is reset, it becomes completely black. Thanks to this clever feature, it became clear whether the chronograph was working or not. The new model (Ref. 2005) met watch enthusiasts in 1964 with a 43mm stainless steel case. 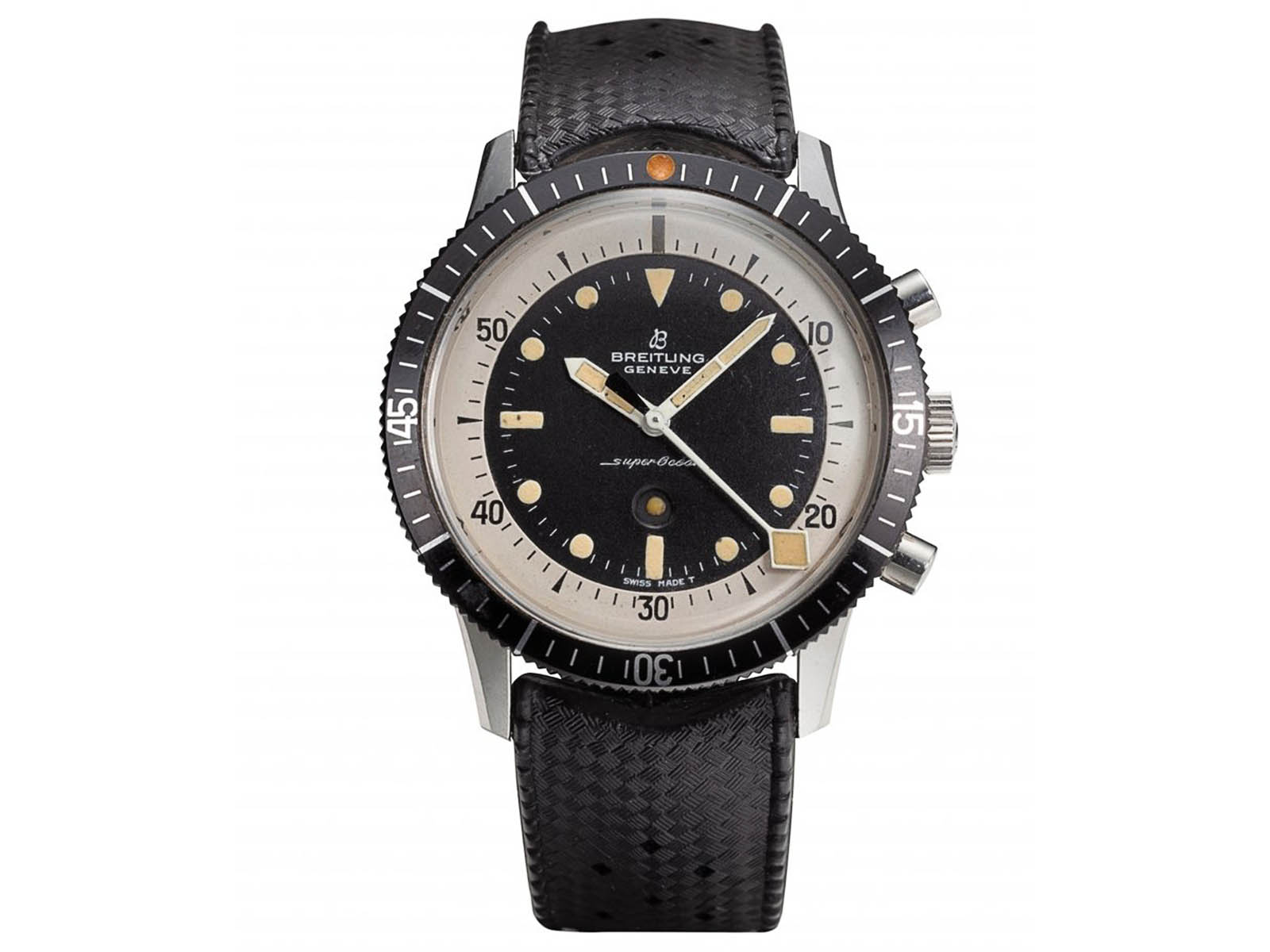 Born in 1969 with the collaboration of Heuer-Leonidas and Buren-Hamilton, Chrono-Matic, one of the first automatic chronographs, was introduced. This model combined the performance and functionality of the chronograph with the comfort of an automatic watch that does not need to be wound every day. Breitling presented its first Superocean automatic model (Ref. 2105) with a 48mm case and a new patented waterproof rotating bezel. The colorful inserts and the orange insert in the rotating bezel created the typical design codes of the 1970s and gave Superocean a fresh, dynamic look. 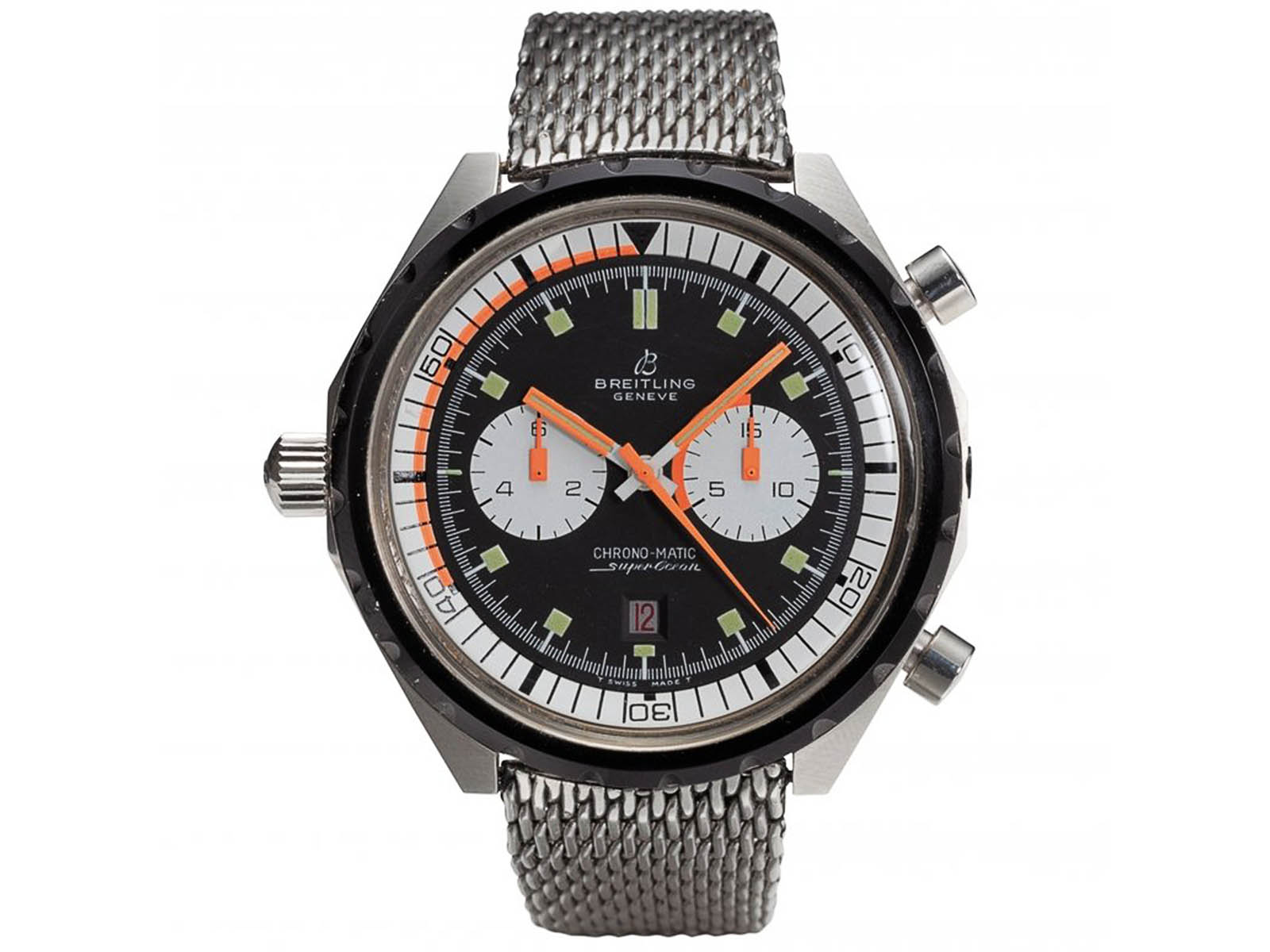 By 1983, the brand pushed the technical limits once again and offered the Superocean “Deep Sea” (Ref. 81190) model to the watch aficionados. Resisting water pressure up to 1000 meters, this model appealed to professional divers. This impressive water resistance came with a patented case back that acted like a helium escape valve. 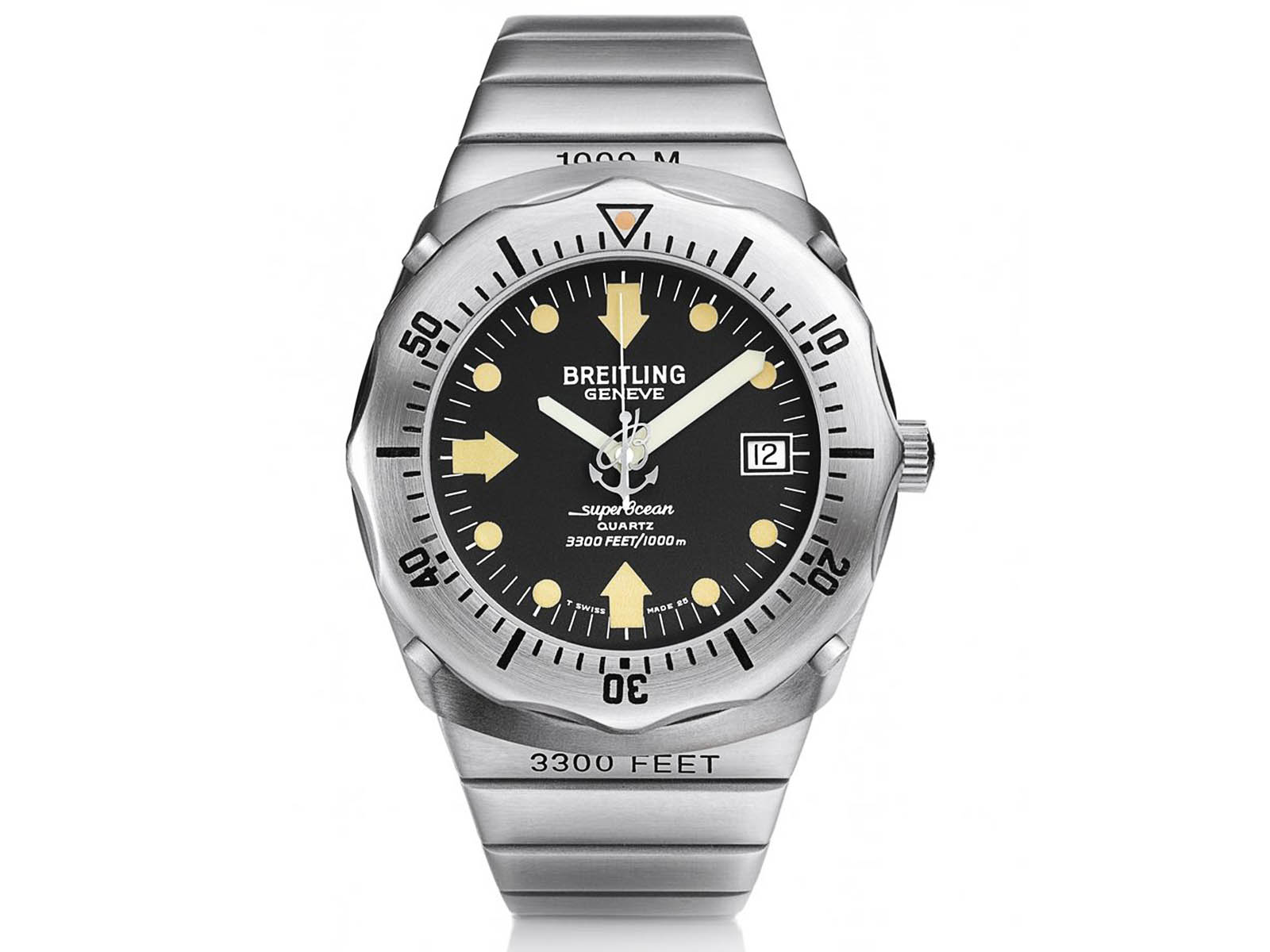 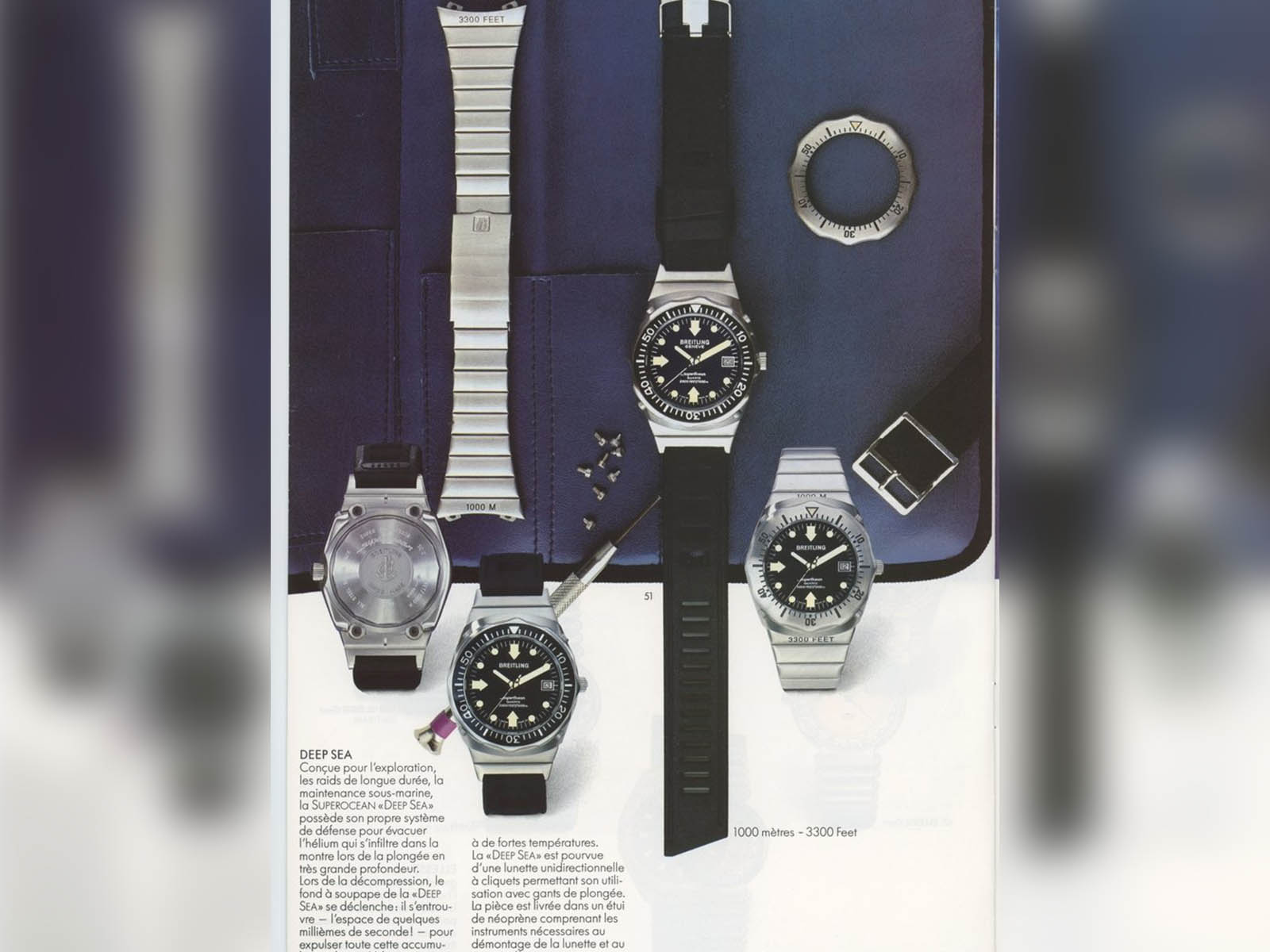