Omega Speedmaster Dark Side Of The Moon Apollo 8

The newest member of Omega’s iconic Speedmaster Collection, Dark Side of the Moon Apollo 8, blends the traditional Speedmaster Professional design elements with cutting edge technologies and up to date details. 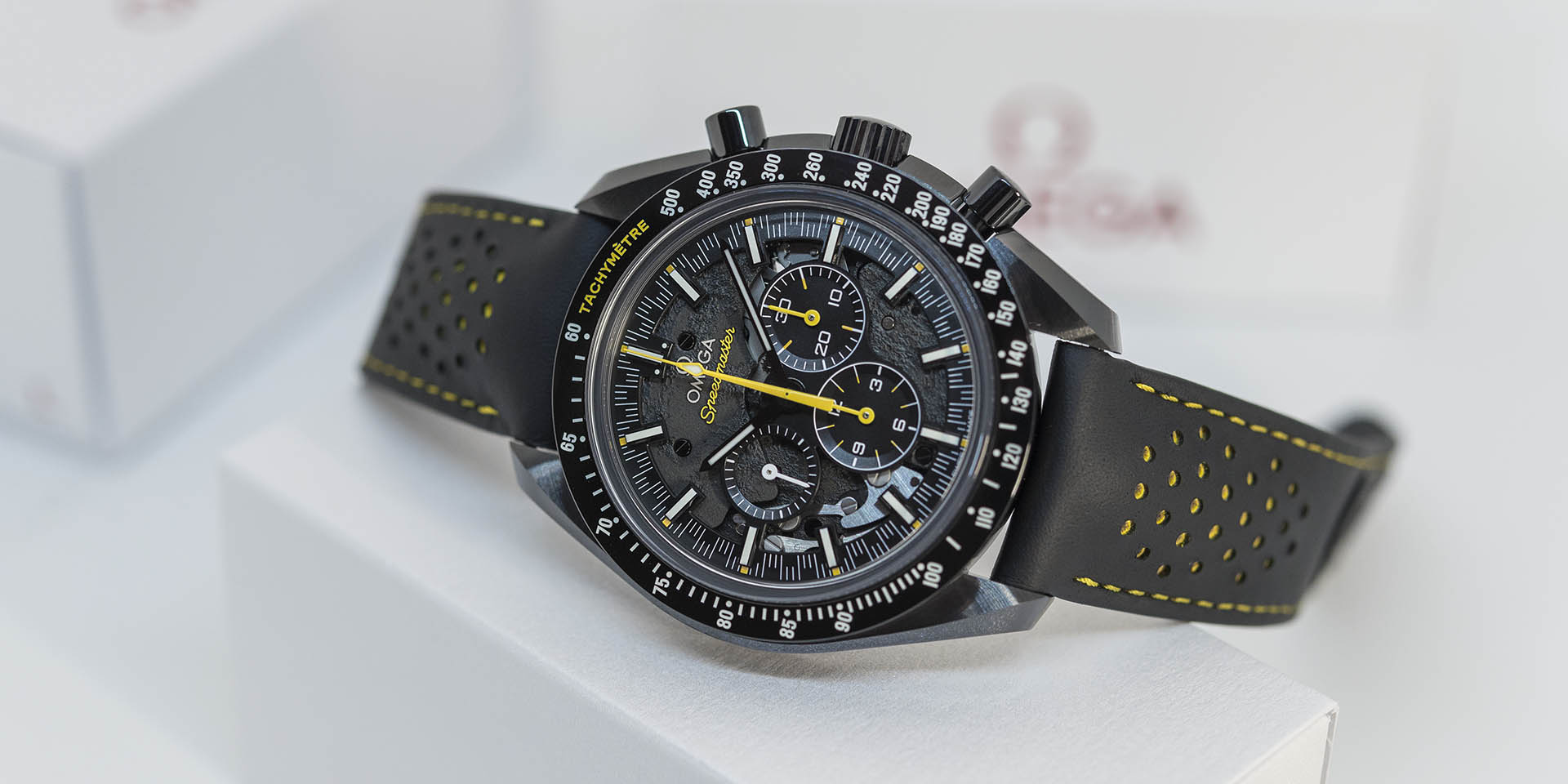 The new model from the Speedmaster Series, which Omega just cannot get enough of issuing limited edition timepieces, was introduced as a part of the brand’s Baselworld 2018 novelties with many details from other models. The 44.25mm diameter ceramic case is visually the same with the Dark Side of the Moon models. The case is equipped with sapphire crystals on both sides and it is water resistant to 50 meters. 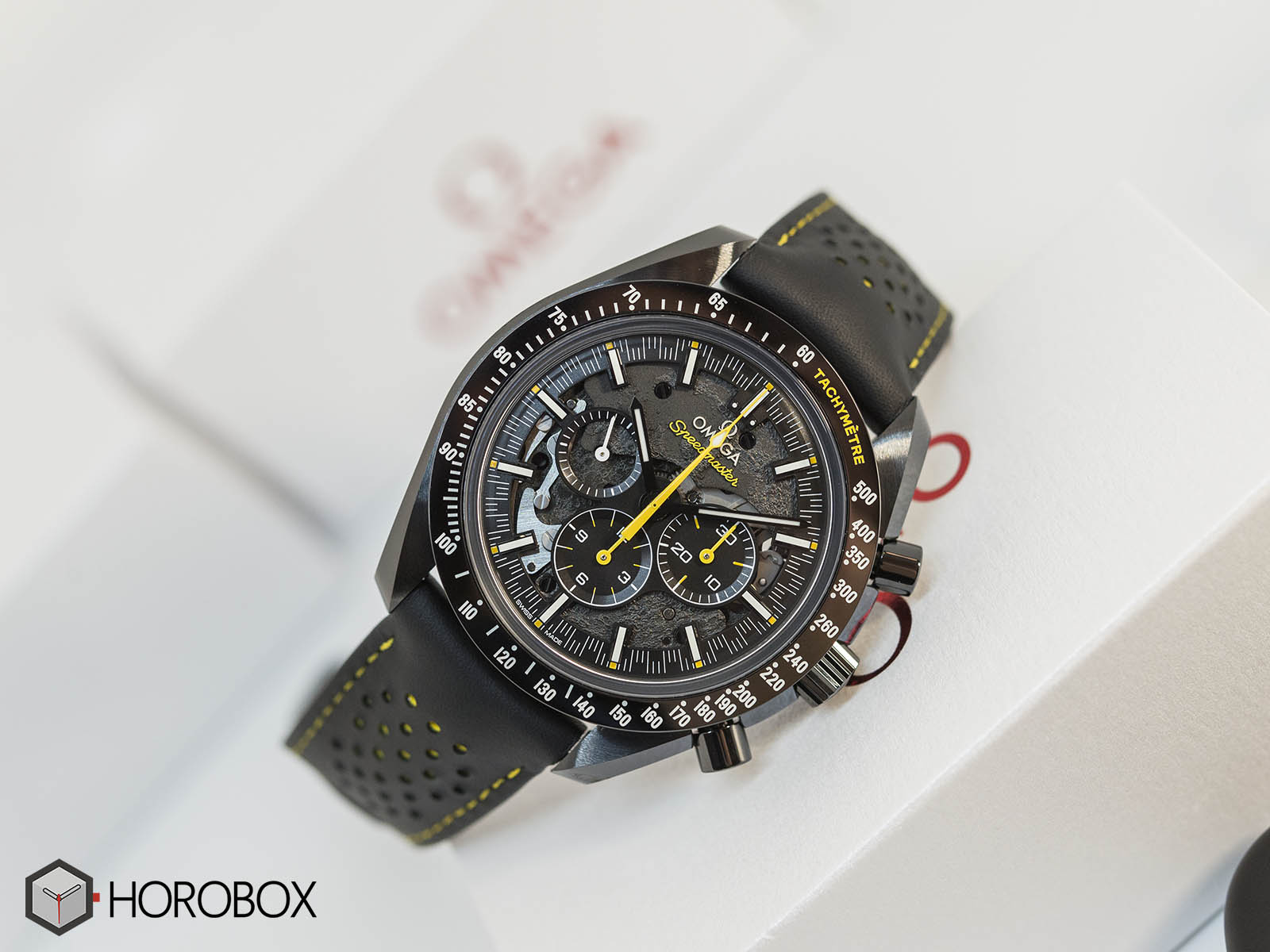 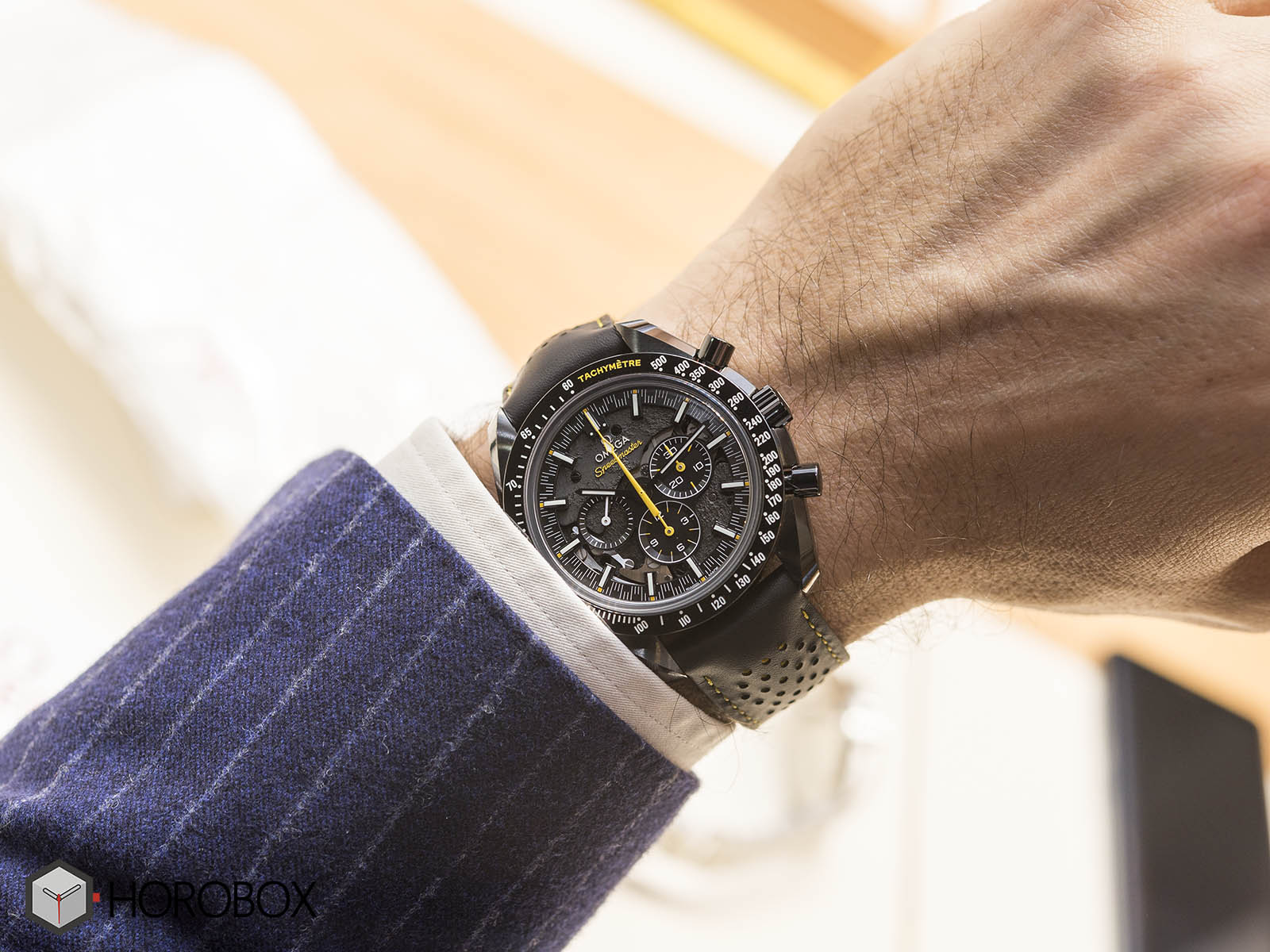 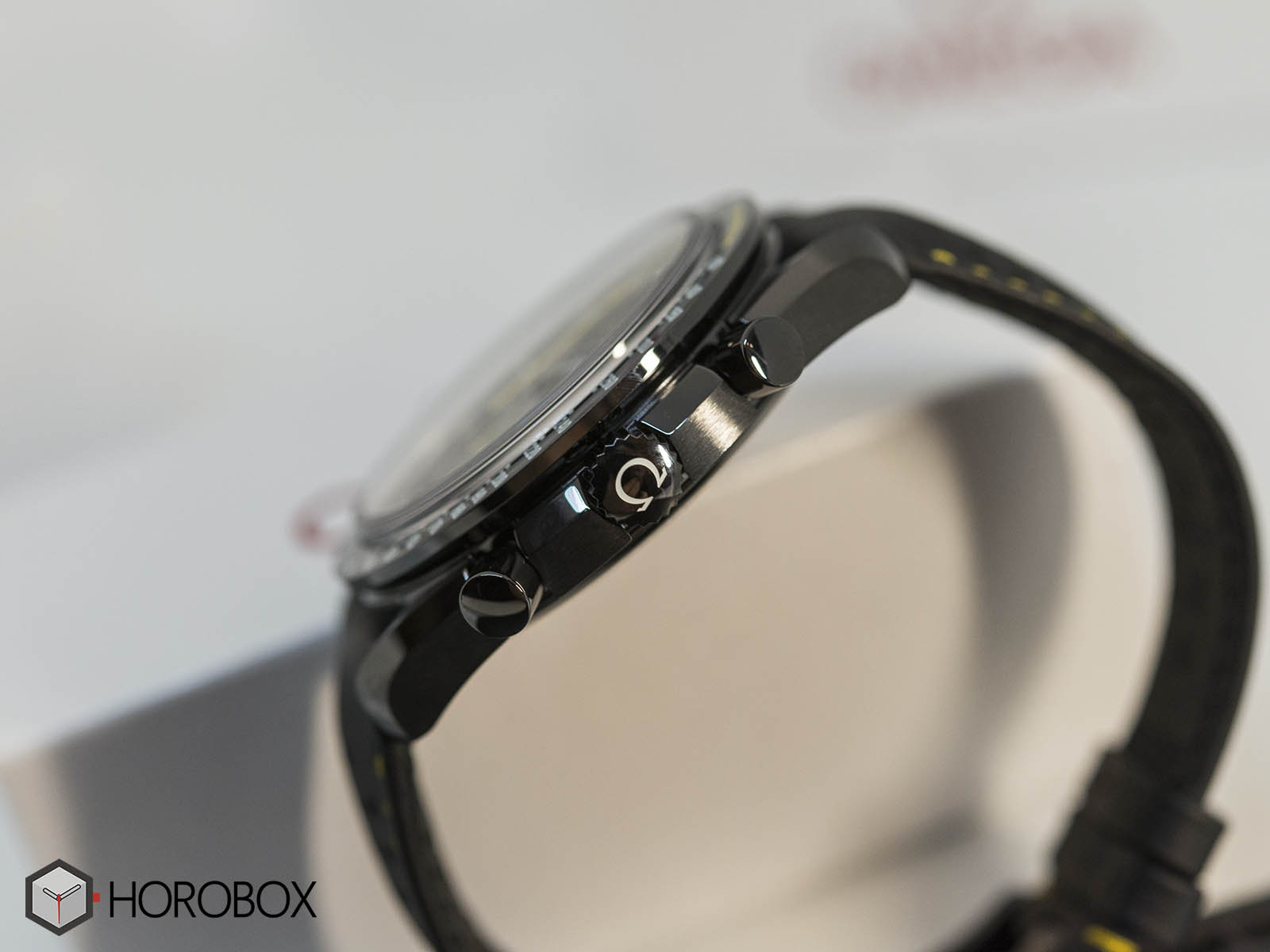 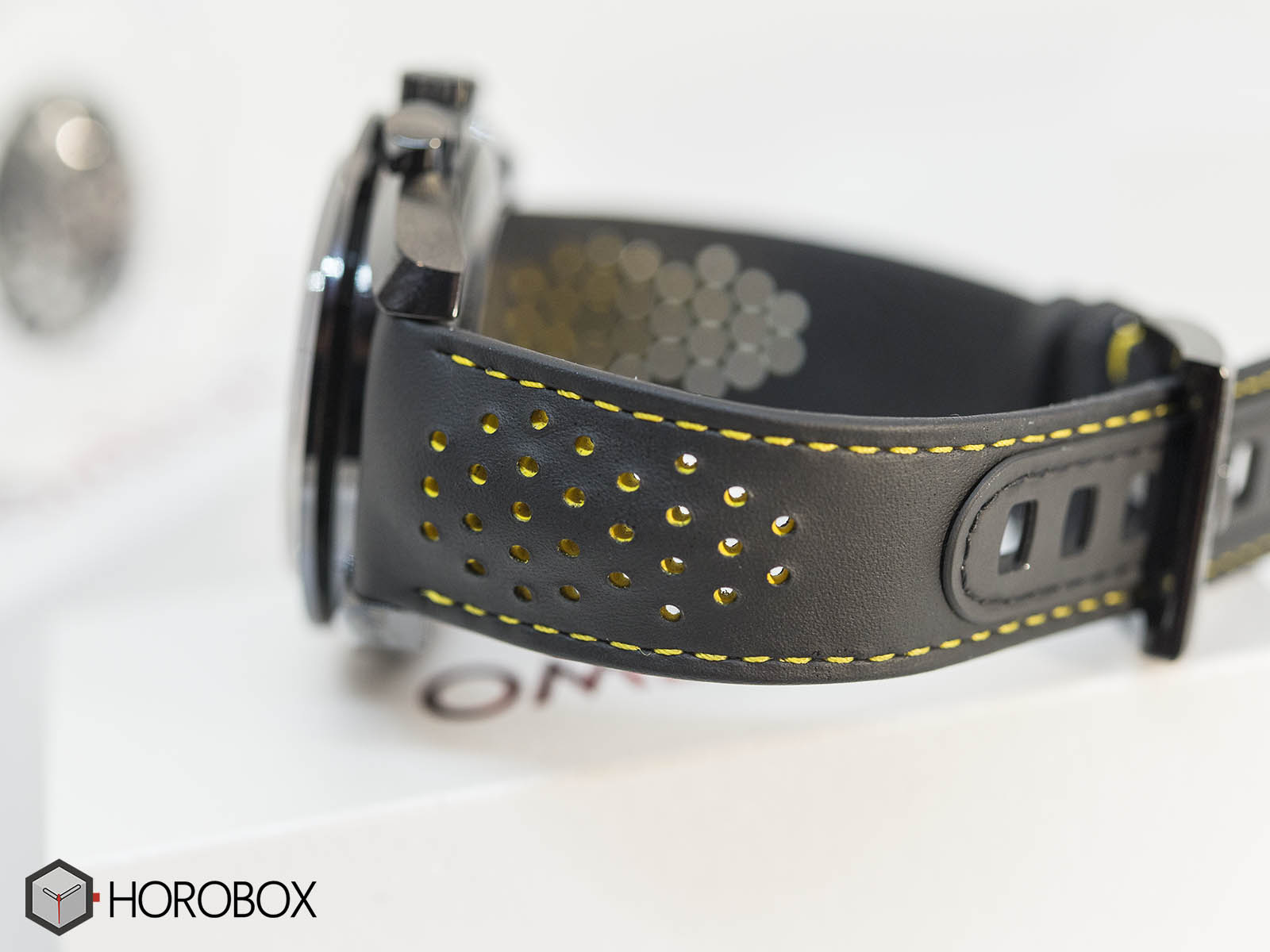 The yellow details that are preferred to provide contrast with the black tones support the sporty character of the model. The markings on the Tachymeter bezel and the Omega emblem on the top are filled with SuperLumiNOVA phosphor material. The parts of the dial and the movement that are prepared to represent the lunar surface are arguably the nicest parts of the model. 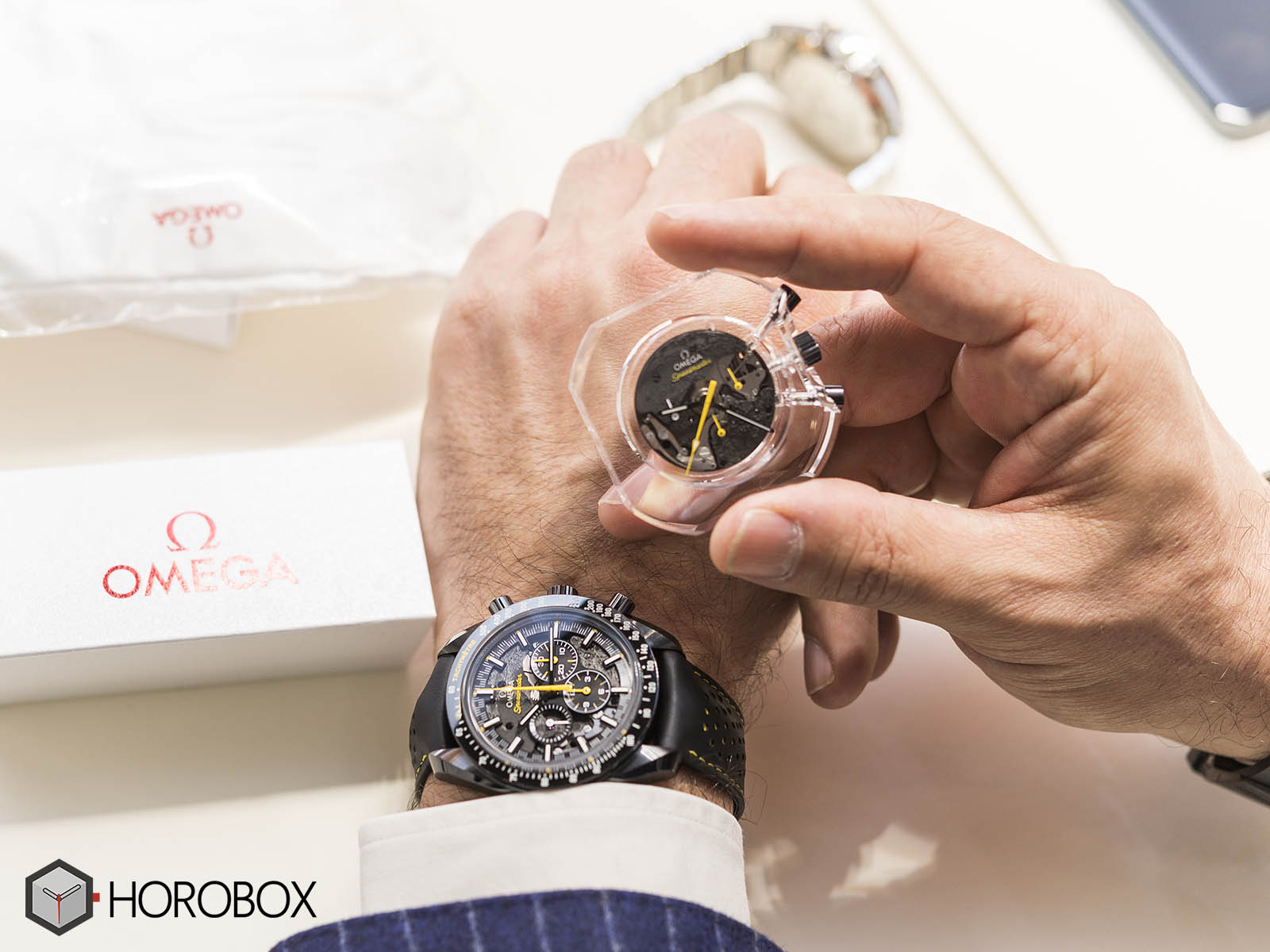 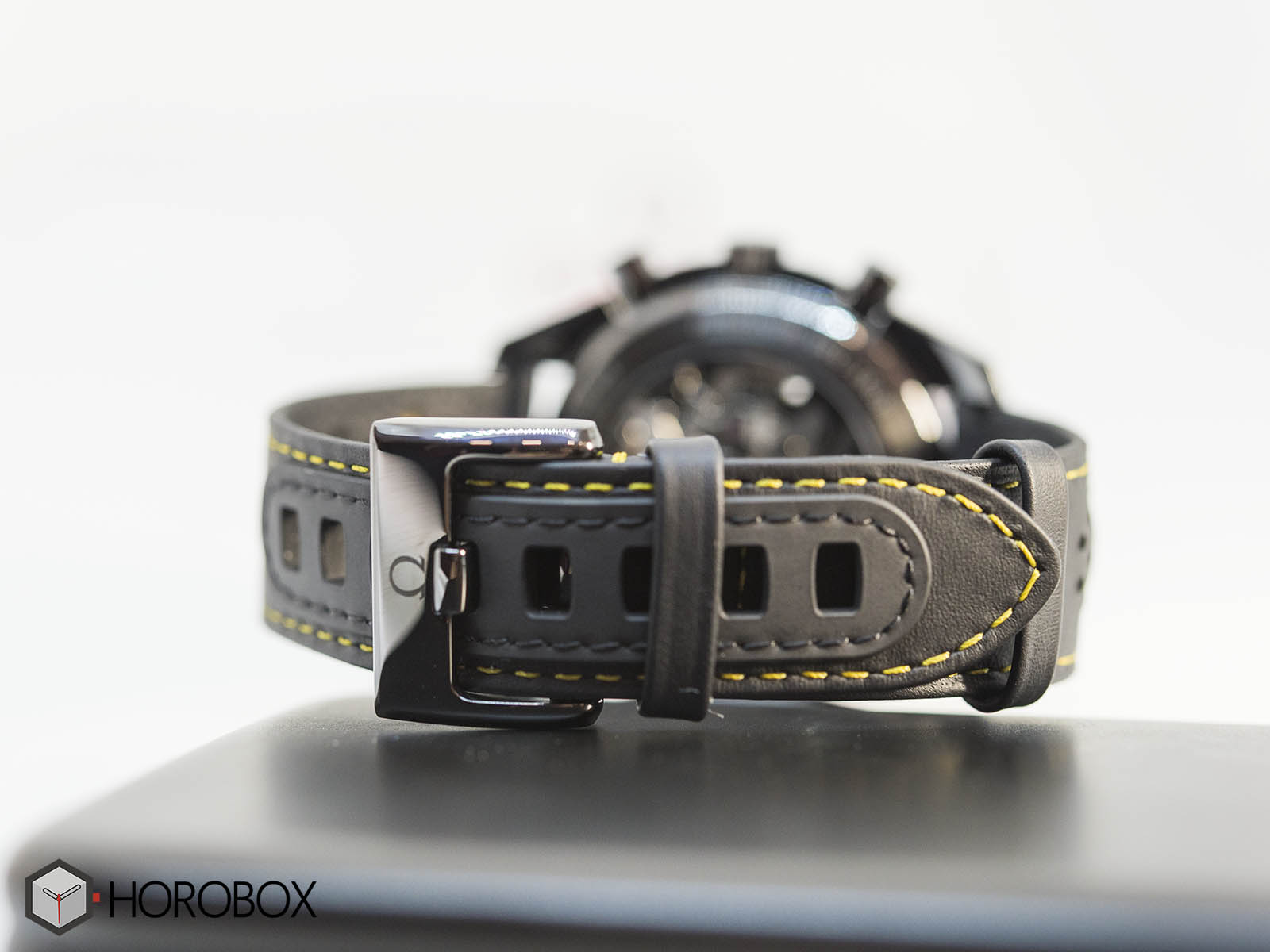 Omega Speedmaster Dark Side of the Moon Apollo 8 is powered by the Caliber Ref.1869 movement which is exclusively developed and produced for the model. The movement, which differentiates from the legendary hand-wound movement Caliber 1861 with the blackened components, is technically inferior to the brand’s in-house chronograph movement family 93XX. The movement beats at 21.600vph and offers 48 hours of power reserve when fully wound. The problem is that the movement that we originally used to see the in the 42mm Speedmaster Professional models is a little small for the 44.25mm case causing the chronograph sub-counters to be placed too close to the center. 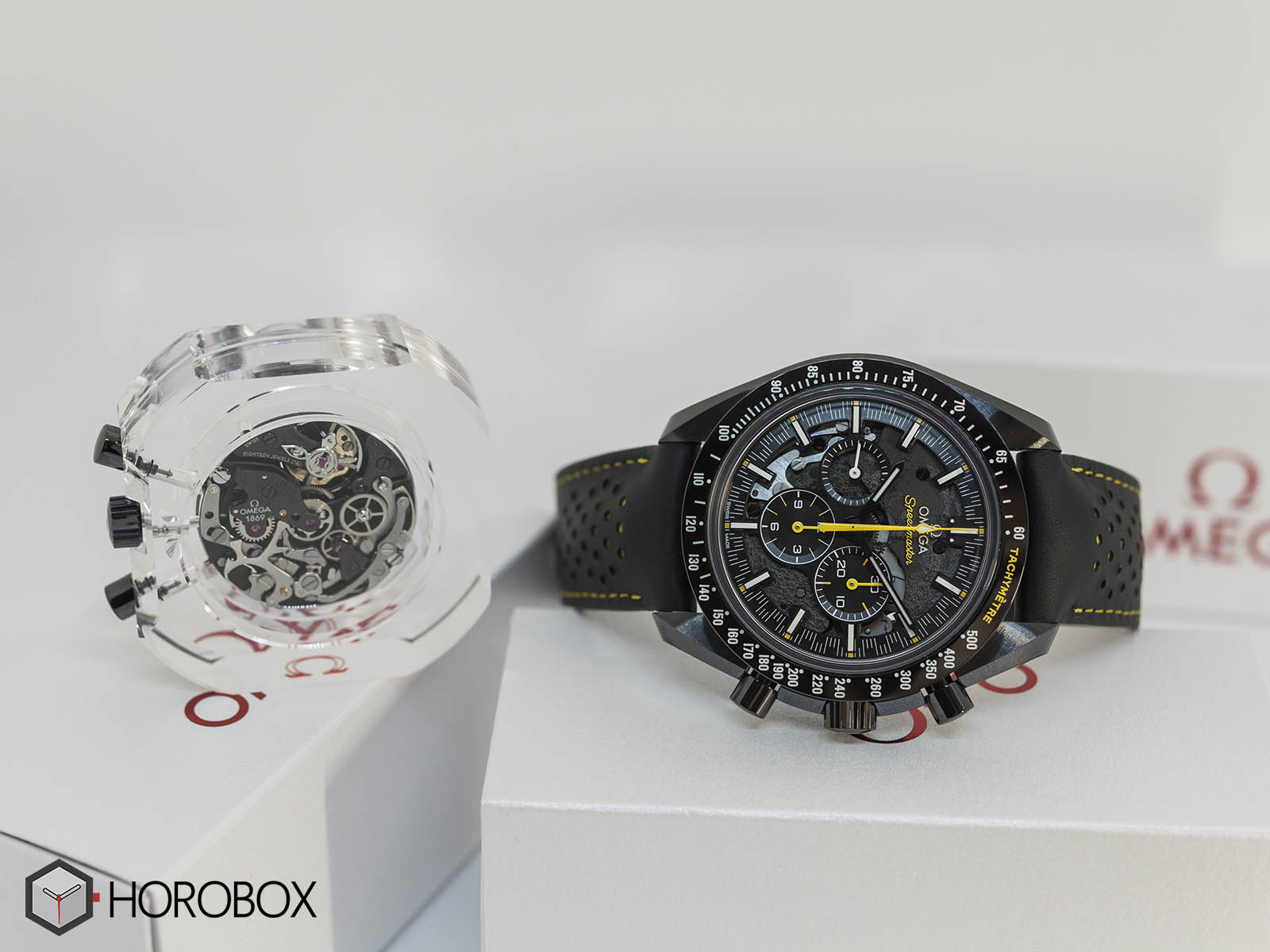 At the back of the watch is the "Apollo 8, Dec 1968" and the crew’s famous word "We’ll See You on the Other Side” in engraved. The Apollo 8 space mission was one of the critical steps in America’s space exploration programs. Apollo 8, which was launched only 17 months after the Apollo 1 where three astronauts died, has toured around the moon’s orbit 10 times during its 20-hour mission. 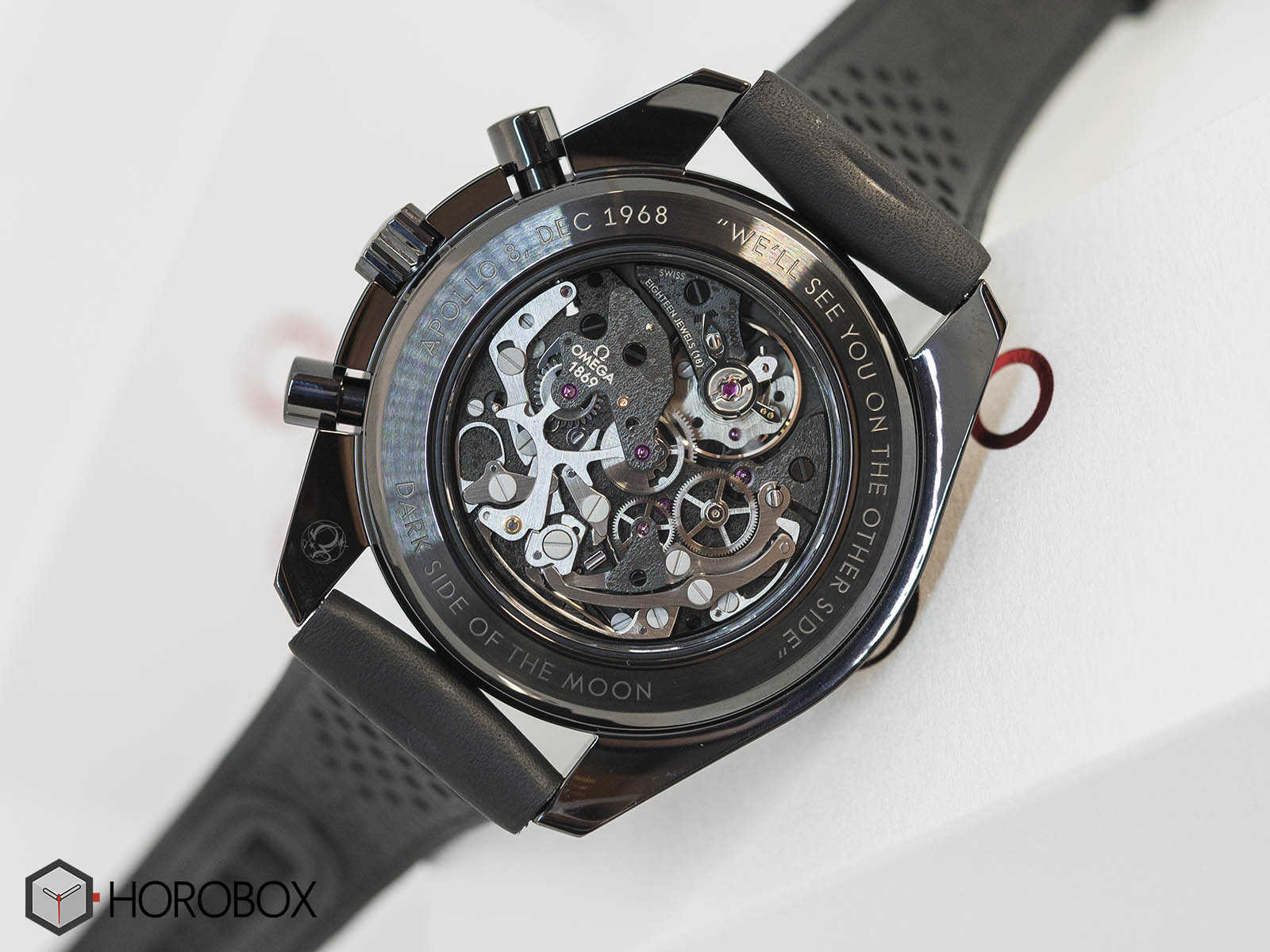 For Omega, which uses NASA and its associated space programs as an advertising tool, it seems inevitable to make continuous additions under the name of the limited edition version of the Speedmaster family. It is possible to encounter very special Speedmasters, sometimes we see models that have not been worked on enough. For me, Omega Speedmaster Dark Side of the Moon Apollo 8 is placed somewhere between. Considering the increased MSRP due to the limited version, it may be logical to go for the more technically superior Dark Side of the Moon models with self-winding movements. On the other hand, perhaps for some, only the movement’s details will provide the motivation required for the purchase. 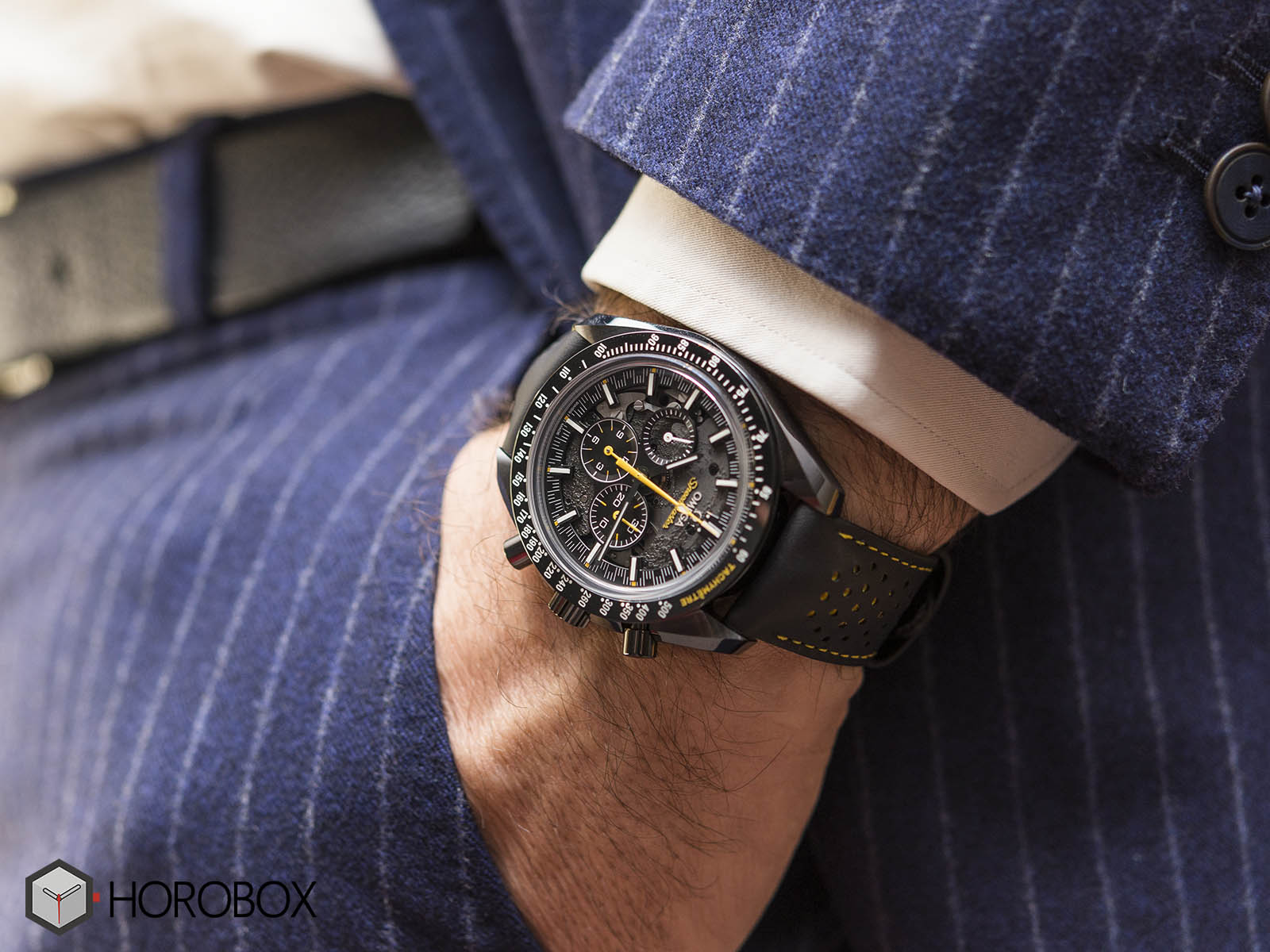 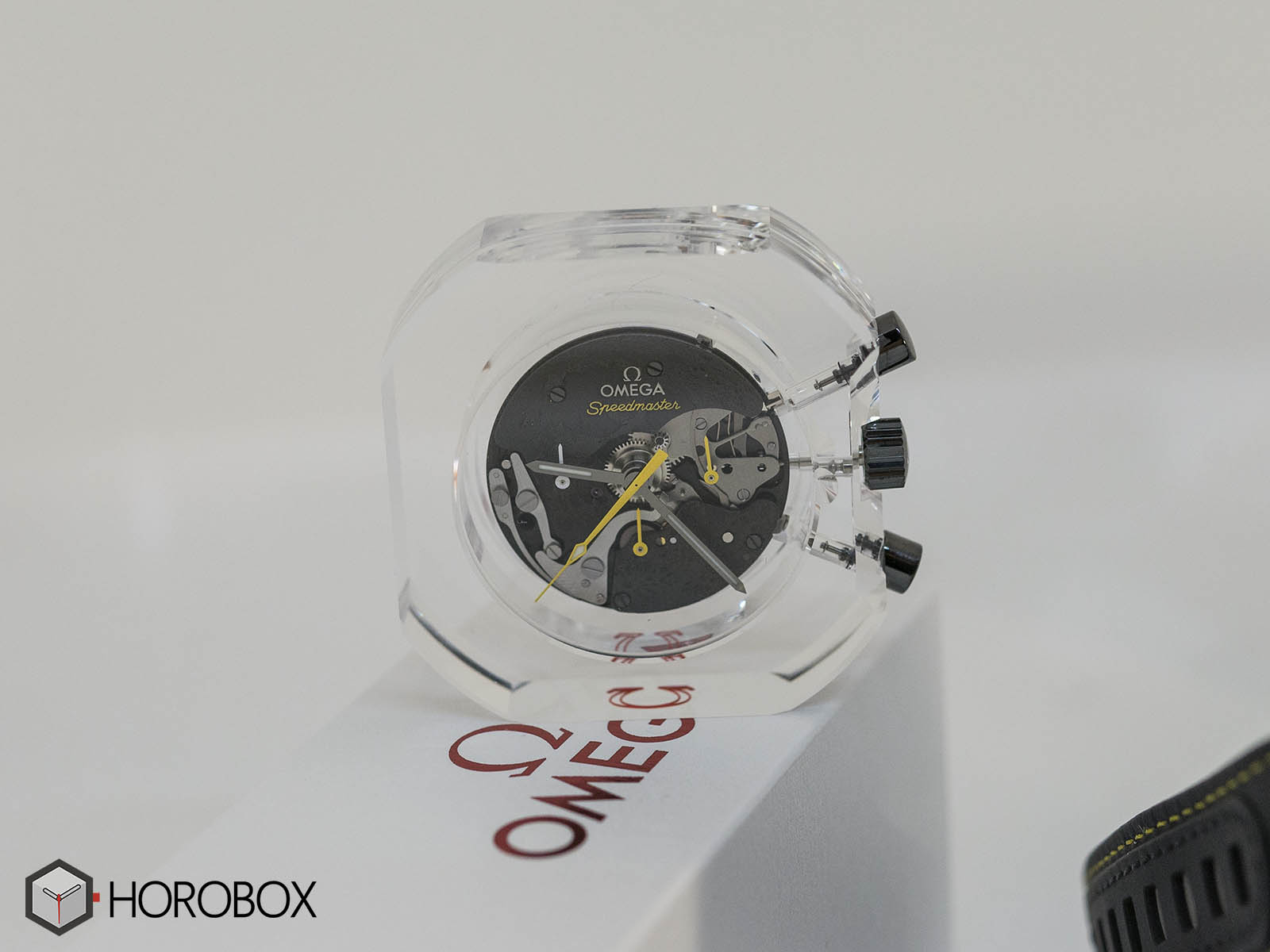