Patek Philippe’s Pilot series, which debuted in 2015, continues with the new Ref. 5520P. The newest member of the brand in the Grand Complication class is the guest of our Hands On corner with its pros and cons. 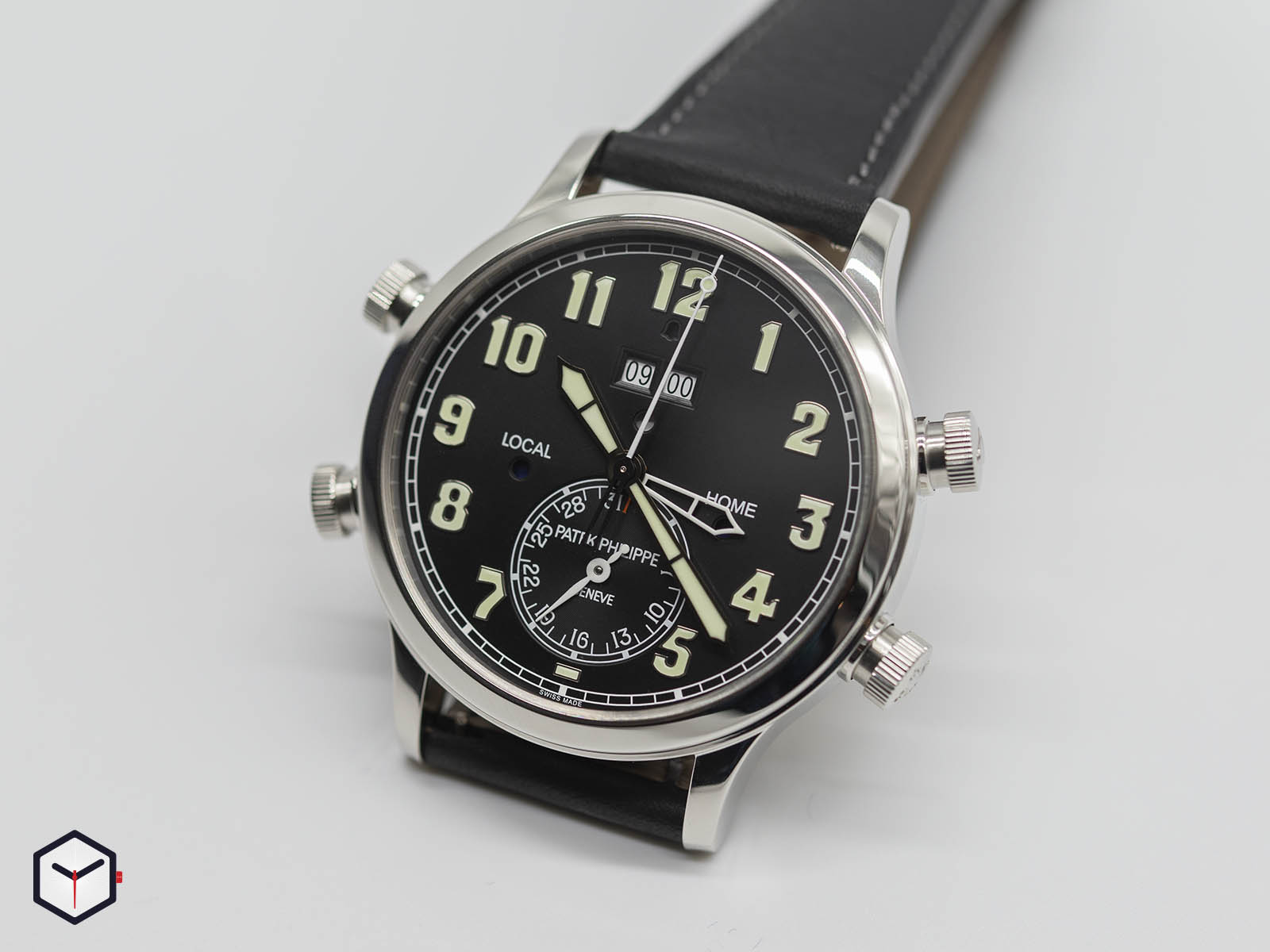 You’re right; the words Patek Philippe and Pilot don’t seem to fit together. Yet, the brand’s relation with this pilot watches goes back to many years ago. However, the pilot watch adventure of Patek Philippe, who entrusted the models produced for pilots to the professionals back in the 1930s, did not last long. 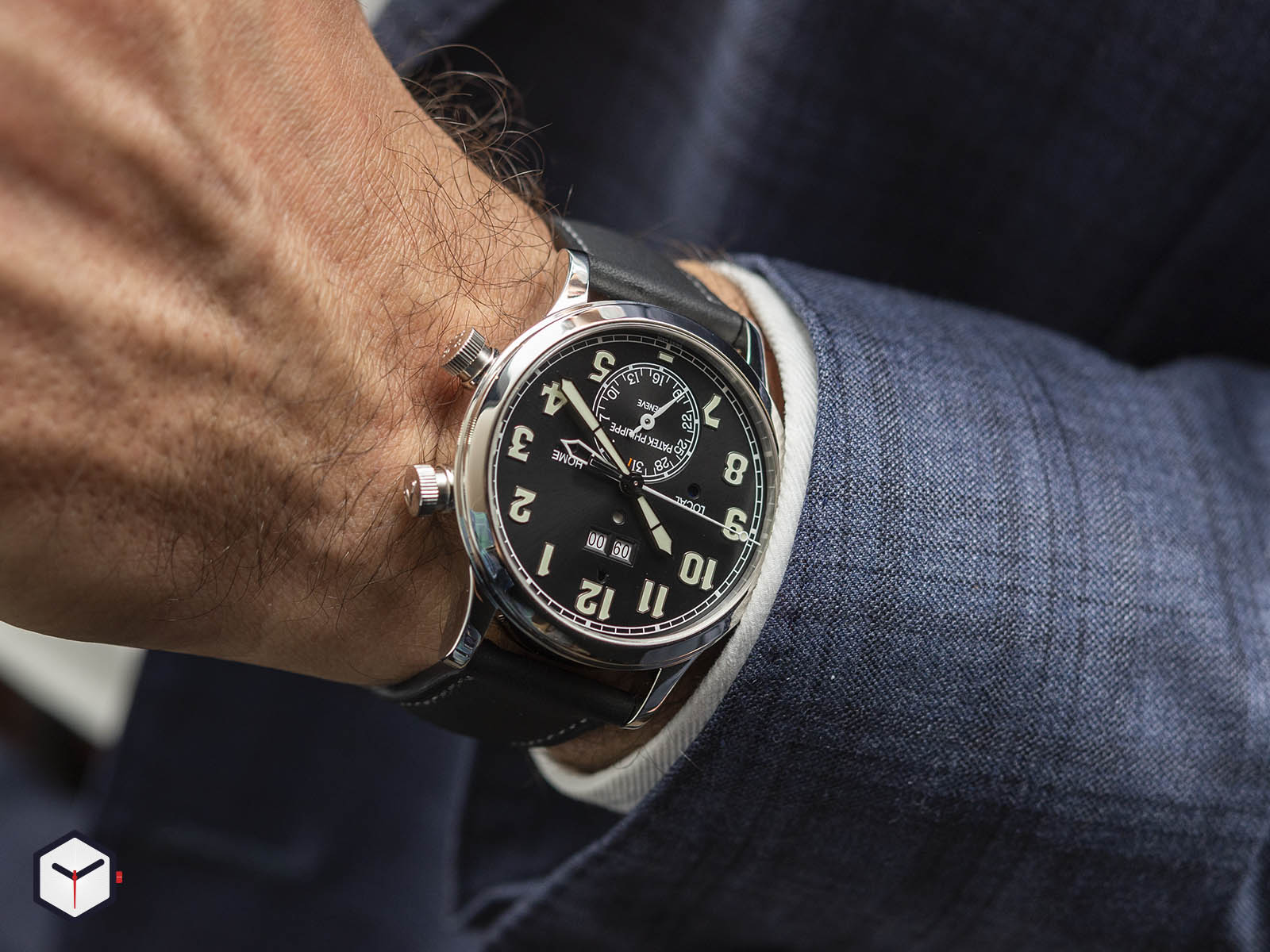 In 2015, a very innovative step was taken for a conservative brand like Patek Philippe and a pilot watch, the 5524G, was introduced. Even though the model made quite an impact upon introduction, there are also those who see the step as a larger case, relatively sporty lines, and a different dial only, and called it a move away from the traditional Patek Philippe spirit.

Now we have the second model of the series, which is still in its infancy. Patek Philippe Alarm Travel Time is included in the Grand Complications collection of the brand’s product range due to its features. Offered with a Grade 950 Platinum case measuring 42.2mm x 11.6mm, the model is quite large for Patek Philippe’s classic style. The waterproof level of the watch is limited to 30 meters, which I cannot reconcile with the sporty details. Both sides of the case are equipped with sapphire crystals as expected. 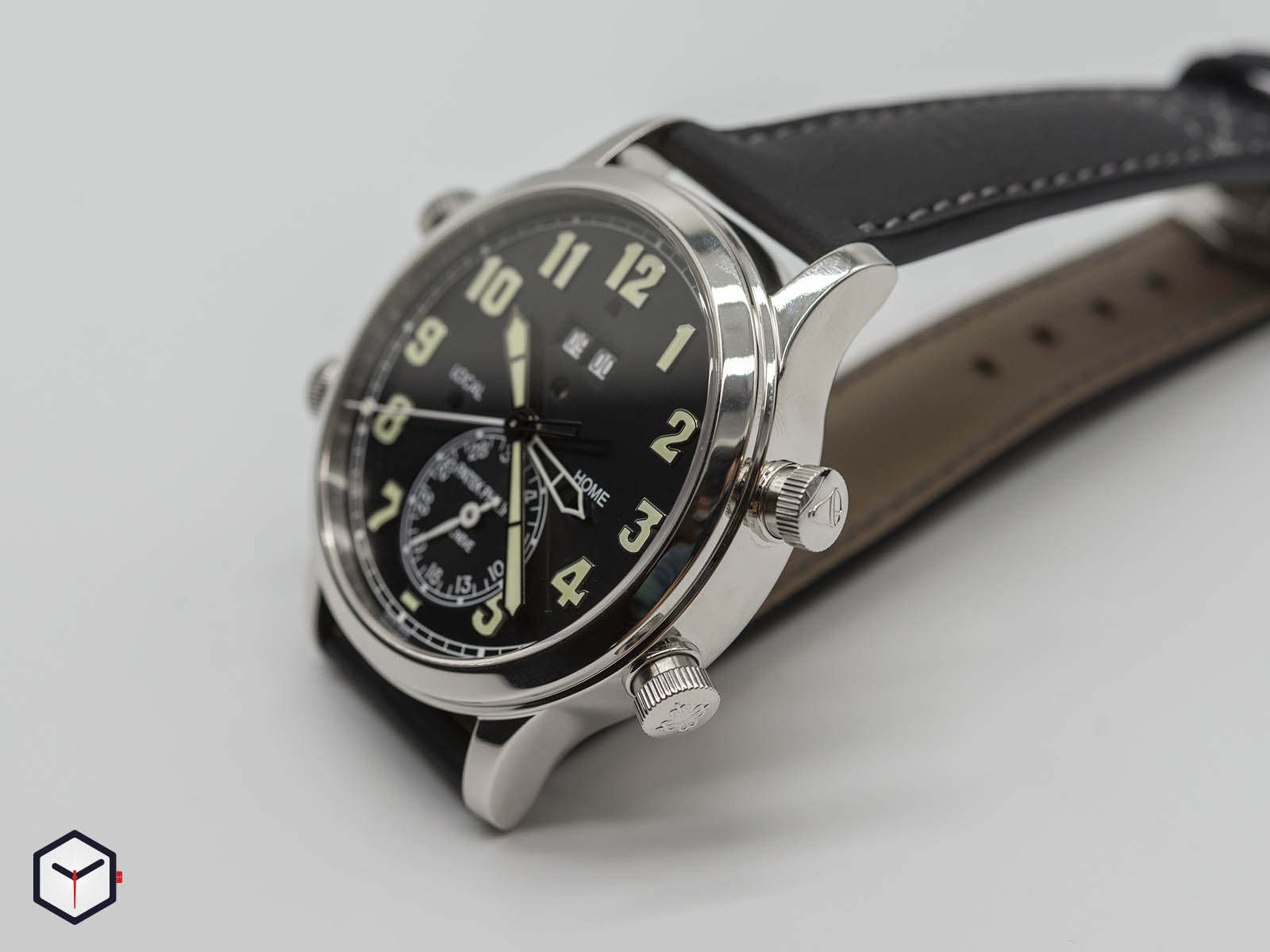 The dial is extremely unusual, especially for PP. Super-LumiNOVA filled, large Arabic number indexes and wide promise maximum legibility under all conditions. The date is displayed through the sub-dial located at 6 o’clock and the alarm-time can be monitored from the display placed at 12 o’clock. There are many displays in the dial in various sizes. The one that is placed over the others and shaped as a bell, displays the alarm’s on/off status. The alarm can be set in 15-minute intervals. So you don’t have the luxury of setting the alarm at 10:23, you can either be warned early at 10:15, or be late at 10:30. The small dot just below the alarm time window indicates whether the alarm is set before or after midnight. The two points at 3 and 9 o’clock display the day/night information in the local and visiting time zones. 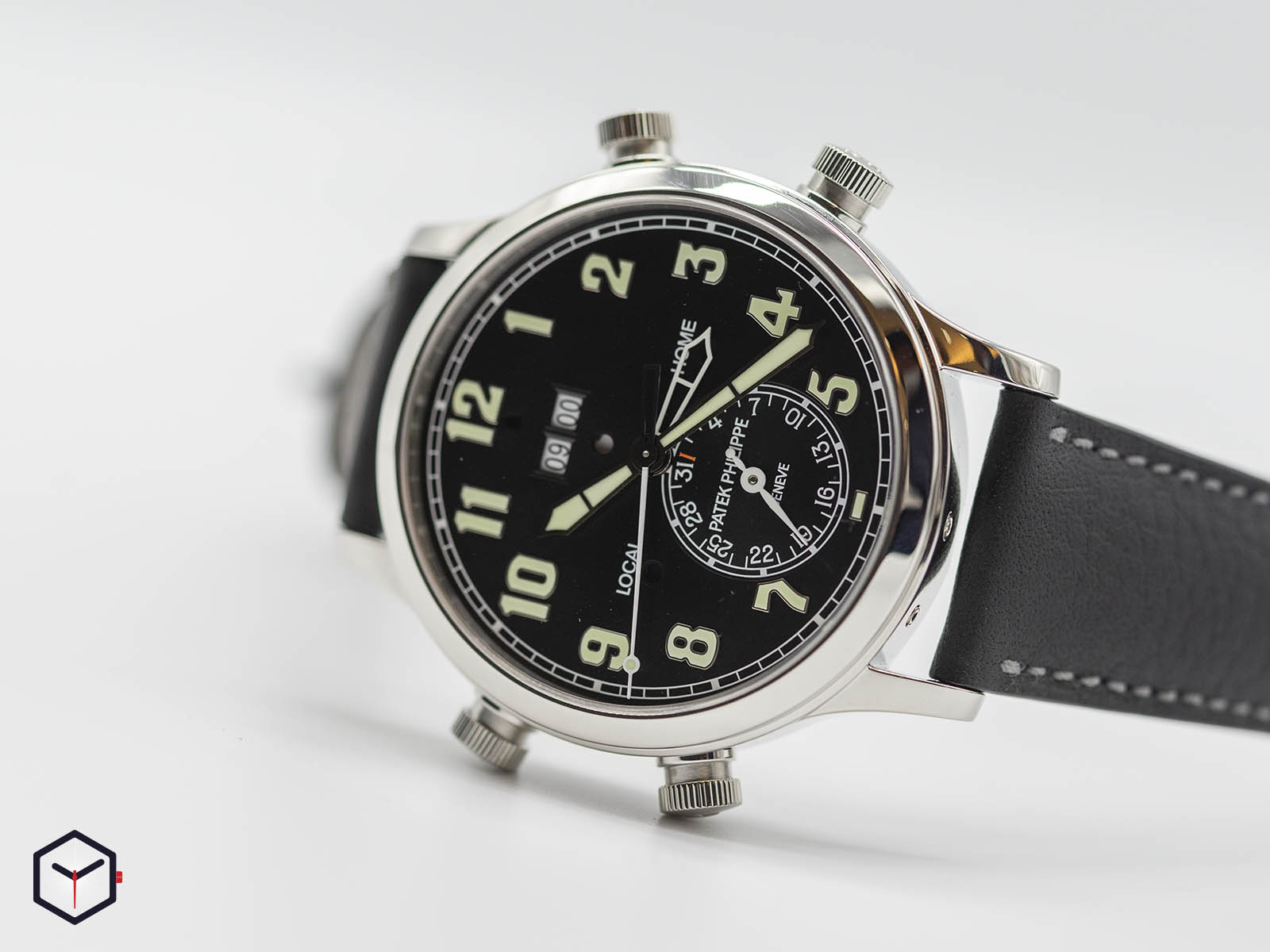 There are four winding crowns/pushers placed on both sides of the case. The pushers on the left side adjust the local time forward and backward at one-hour intervals, while the right side pushers adjust the time and set the alarm independently. These two buttons feature Patek Philippe’s patented locking system. This system is activated by a quarter turn of the crown and acts as a lock against unwanted use. 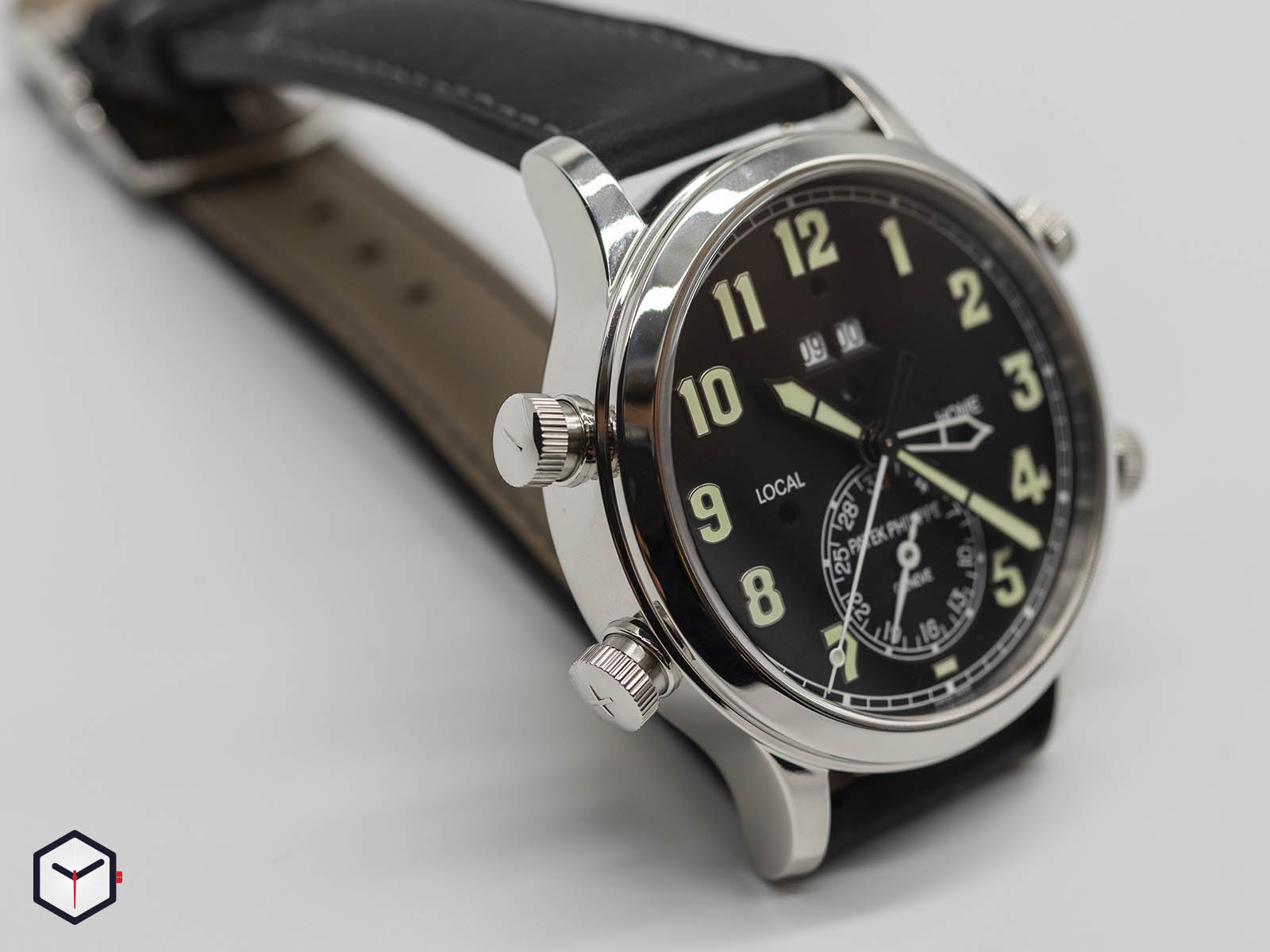 The model is powered by the fully manufacture Caliber AL 30-660 S C FUS. 52 jewels/574 pieces self-winding movement operates at a frequency of 4Hz (28.800vph) and can provide up to 52 hours of power reserve when fully wound. Measuring 31mm x 6.6mm, the movement also succeeds to amaze those who see it with its alarm tone that is more like a complete substitute to the Minute Repeater models. The alarm continues to sound for 40 seconds after activation. If desired, the alarm can be stopped earlier. 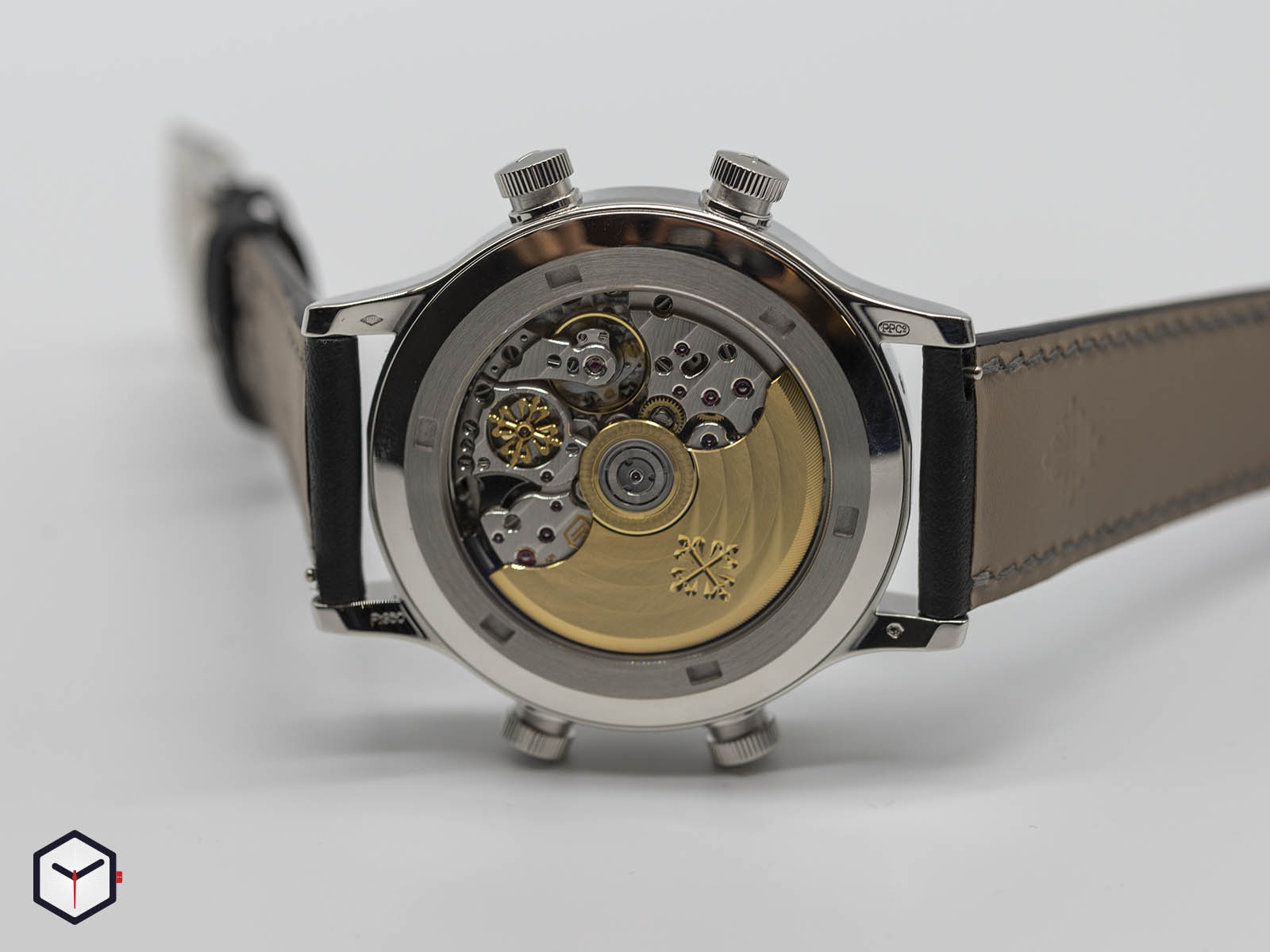 The Patek Philippe 5520P comes with a black calfskin strap and a platinum buckle, just like the case. The list price of the model is 200.000 CHF. To be honest, before I go for a relatively low-level complication such as a mechanical alarm at this price with the PP badge, I’d better consider alternative makes/models.