ROLEX’s diver watch the Sea Dweller, designed for professional purposes, has been among the most admired models of the famous brand since its introduction.  We compared the new 50th Anniversary model introduced at the Baselworld fair this year (Ref. 126600) and the previous version (Ref. 116600) for you. 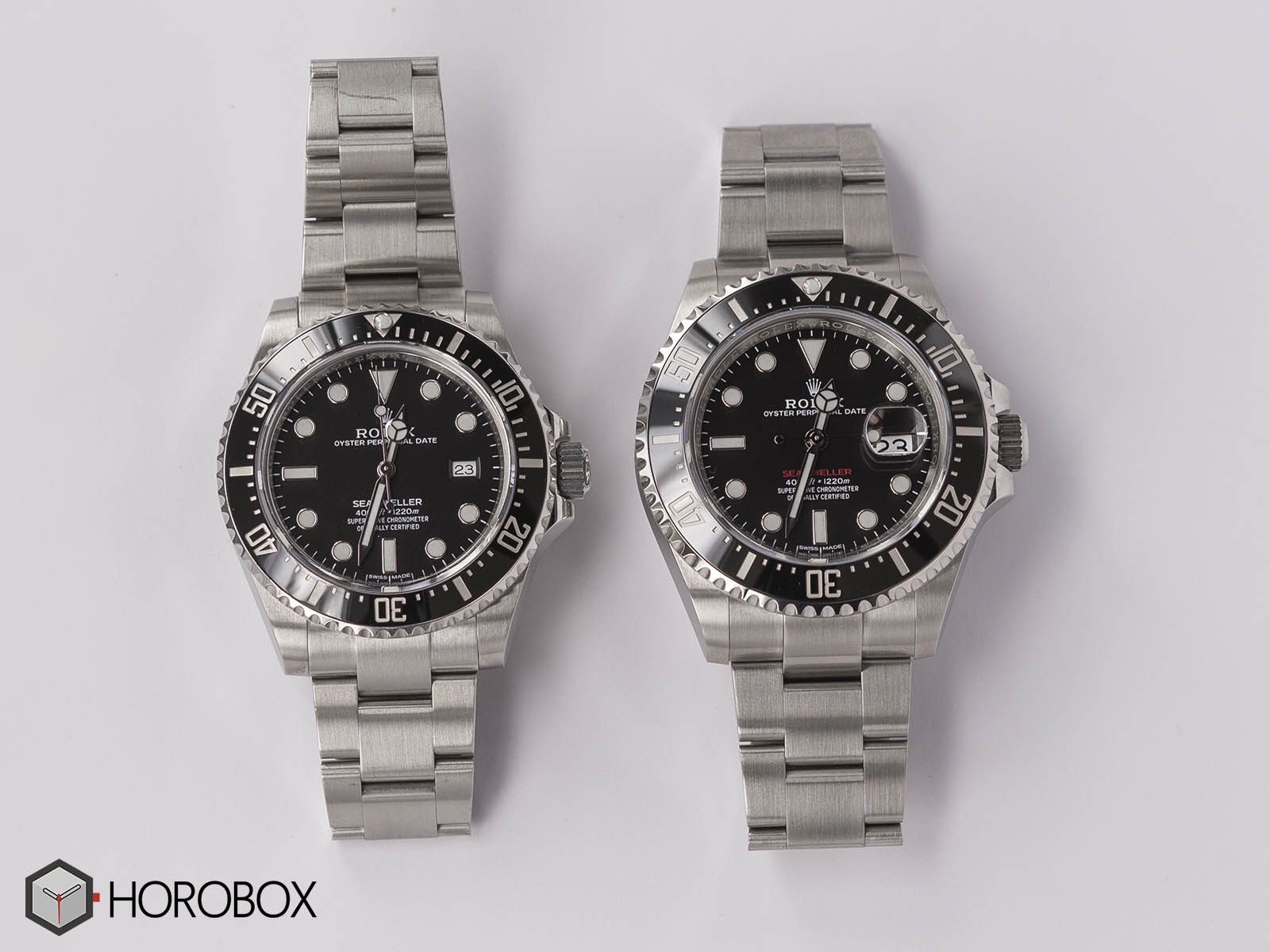 The legendary model developed in collaboration with COMEX, which is considered as one of the leading organizations in its field for executing underwater projects, has undergone many mechanical and cosmetic changes from the first version to the latest edition. These updates, often in the form of a continuation or explanation of technical improvements, have always kept the model in the lead of its class, but also stayed visually loyal to the early versions.

Towards the end of the 2000s, Rolex, especially with material updates, has begun to gradually integrate these patented innovations into their product groups. Known as arguably the most popular model of the brand Submariner heralded the coming of a new era for Rolex sports watches with its Cerachrom bezel made of scratch-resistant fine ceramics, high radiance Chromalight phosphor material that immediately breaks away from the classic SuperLuminova with its bright blue tone, the new Supercase with thickened lugs, the new Glidelock folding clasp and its Maxidial that was first introduced with the Yachtmaster model. At the same time, Rolex, which is not afraid of bending its own limits, introduced a brand new model that can be described as the peak point of technology for analogue diver watches: Rolex Deep Sea (Ref. 116660). 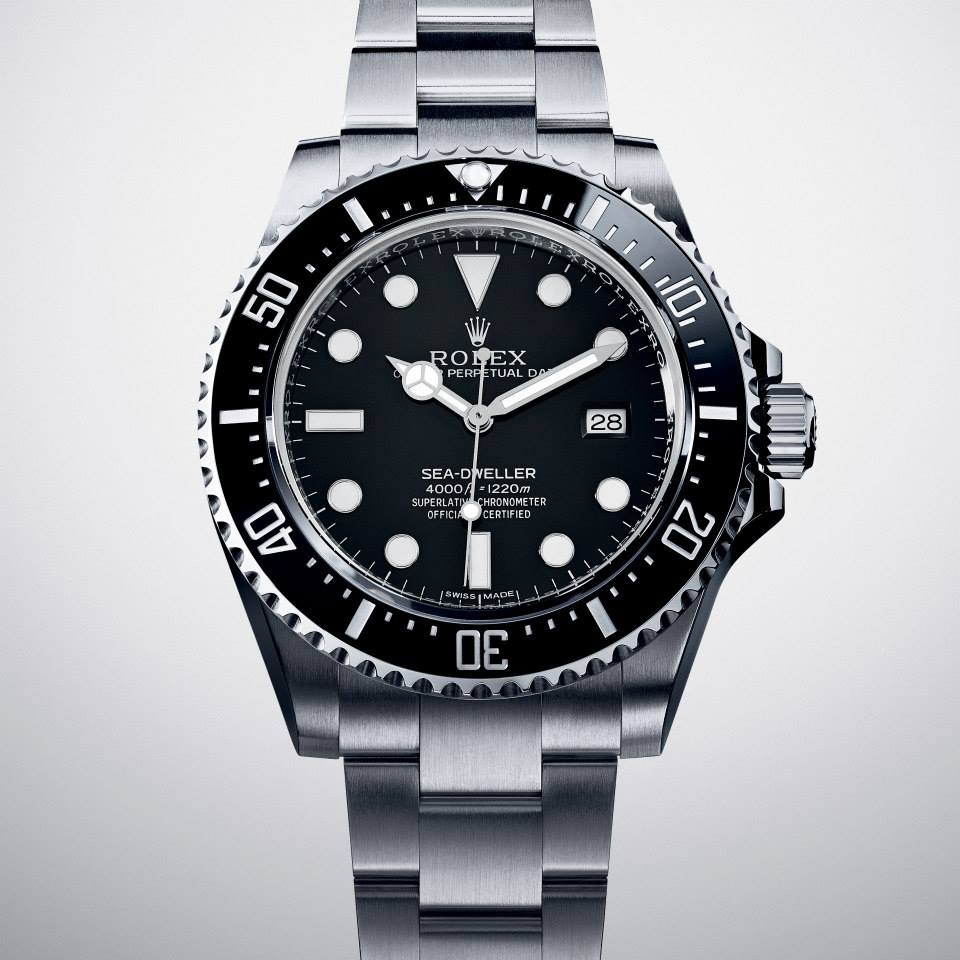 As these innovations gradually progressed into the brand’s model families, the expected novelty from the Sea Dweller’s side was announced at the Baselworld 2014 fair. The legendary model family was presented with a new version that collects all technical and cosmetic updates of the brand under the same roof with a new designation as Ref.116600. Just like the Submariner model, the redesigned version remained faithful to the 40mm case diameter and drew great attention with its technical and cosmetic details that paid tribute to older versions while being exclusive to this model only as well.

You can click here for our review of the most important stainless steel diver watches in the Rolex model family.

In 2017, the excitement of the brand’s fans began to arouse because Rolex’s legendary model, Sea Dweller, would celebrate its 50th anniversary. Prior to the upcoming Baselworld fair, many platforms talked about possible updates from Rolex and assumptions were discussed. Interestingly, the majority had predicted that the Sea Dweller text on the new version’s dial would be written in a different color font. However, there was much more in the new Sea Dweller, which appeared at the Baselworld 2017 fair. First of all, the case diameter was no longer 40mm, it was 43mm. Only 1mm narrower than the 44mm diameter Deep Sea model, this new case was of the most striking updates the Sea Dweller family has ever seen. At the same time it also showed that the model family’s bond with the Submariner was weaker than ever. 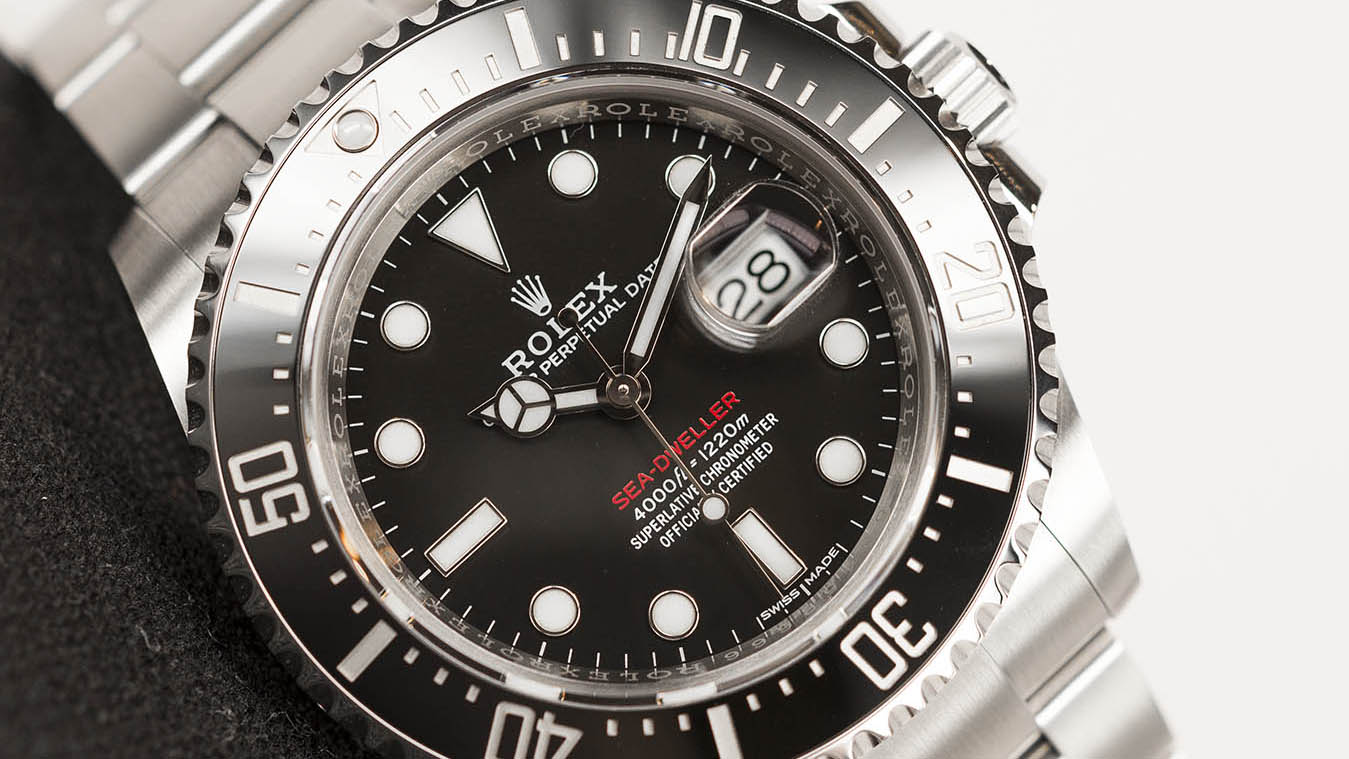 The Rolex fans who asked whether the dial would be finished in matt or glossy black also faced a second shock from a point that they had not anticipated: Ref. The 126600’s crystal had a magnifier on it! I find it useful to open a sub-title here because the 2.5x magnifier is one of the most talked-about and debated features of Rolex. In fact, the importance of that Cyclops cannot be neglected, as Rolex is the inventor of the automatic date change function at midnight. Therefore, there is a link between the Cyclops and the brand which dates way back. Let’s take a look at the names of several models in the brand’s Oyster collection; Date Just, Date, Day Date, Submariner Date... In short, the magnifier and the date indicator are much more than simple functions or design elements to Rolex. 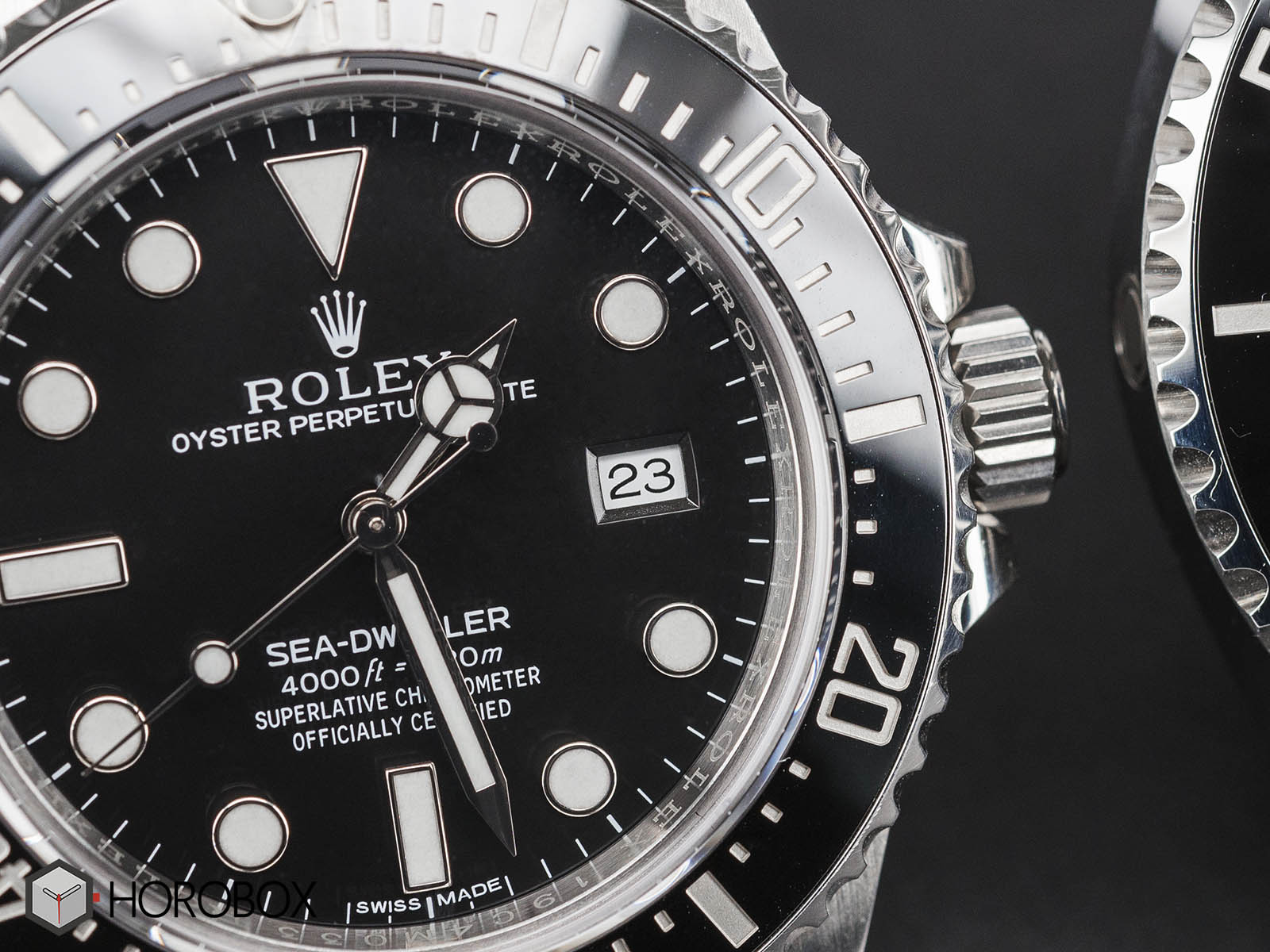 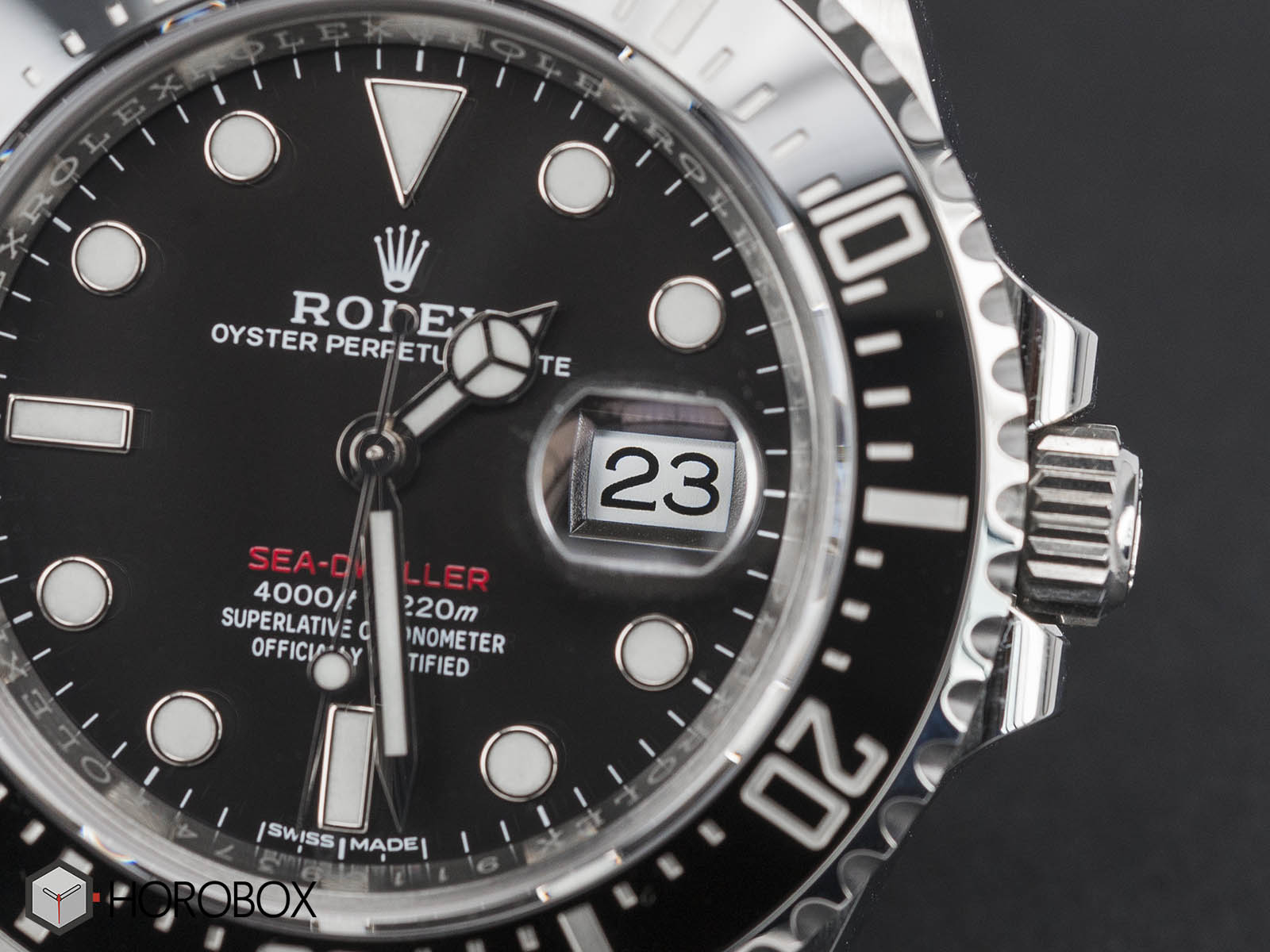 I attended the product presentation of the brand in Baselworld 2017. As soon as I got the Sea-Dweller in my hands that I was waiting eagerly to see, my eyes were attached to the Cyclops. Before I could not even decide whether it was a good or a bad move, I popped the question: Why did you put a magnifying Cyclops on the new version? The answer of the presenting officer was short, clear and actually very meaningful: "Because we could ..." All of the older Sea Dwellers were coming out with sapphire crystal glasses that were thicker than standard versions due to the timepieces’ high water pressure resistance values, which prevented the addition of magnifiers to the crystals . Rolex, who finally managed to solve that issue, did not hesitate to put it on the Sea Dweller after 50 years.

Is it really good or bad? Obviously I cannot answer this question myself yet.  I had the opportunity to have Ref.16600 Sea Dwellers at the past. Despite the fact that I loved wearing them, I remember that I thought to myself I wish that date display was not there.  I never complained about the lack of that bubble as I was never a big fan of date displays. On the other hand, I am OK when it was attached on a Date Just or a Day Date model.  I think my preference is limited for sports models only. To summarize, I have not been able to make my own decision yet, but if you want to buy yourself a new Sea Dweller, you have to make a decision because you will either get the new Sea Dweller with that Cyclops or you will not buy the new Sea Dweller at all. 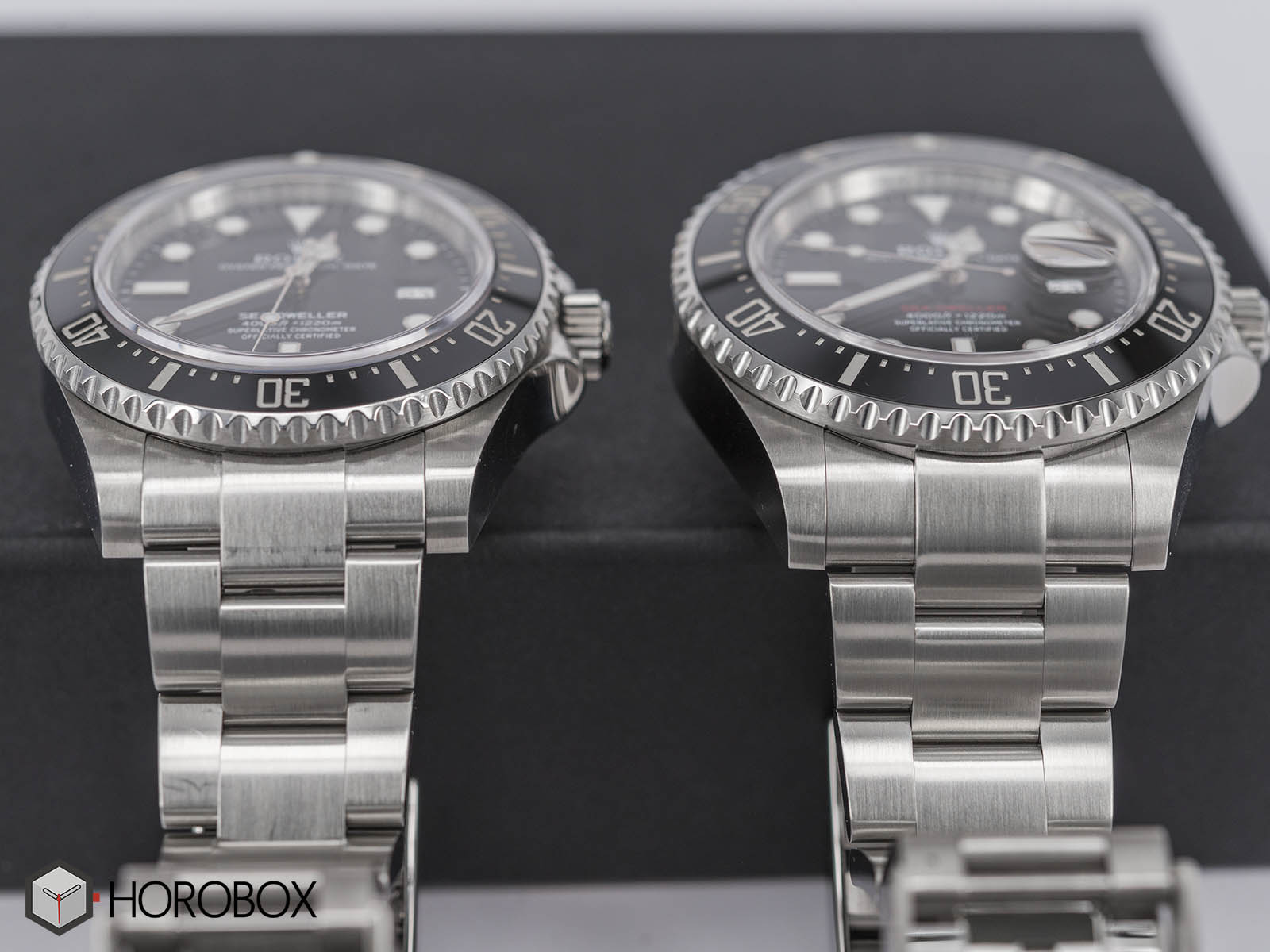 In the technical comparison section, I arranged a simple chart showing the technical (and some cosmetic) differences of both models together:

One of the cases I want to mention here is the movement used in the new model.  The new Sea Dweller Ref. 126600 is powered by the latest technological marvel of the company Caliber Ref.3235. Besides a few technical upgrades, Caliber 3235 offers an impressive power reserve of 70 hours when fully wound over its predecessor’s 48h thanks to its large barrel design. 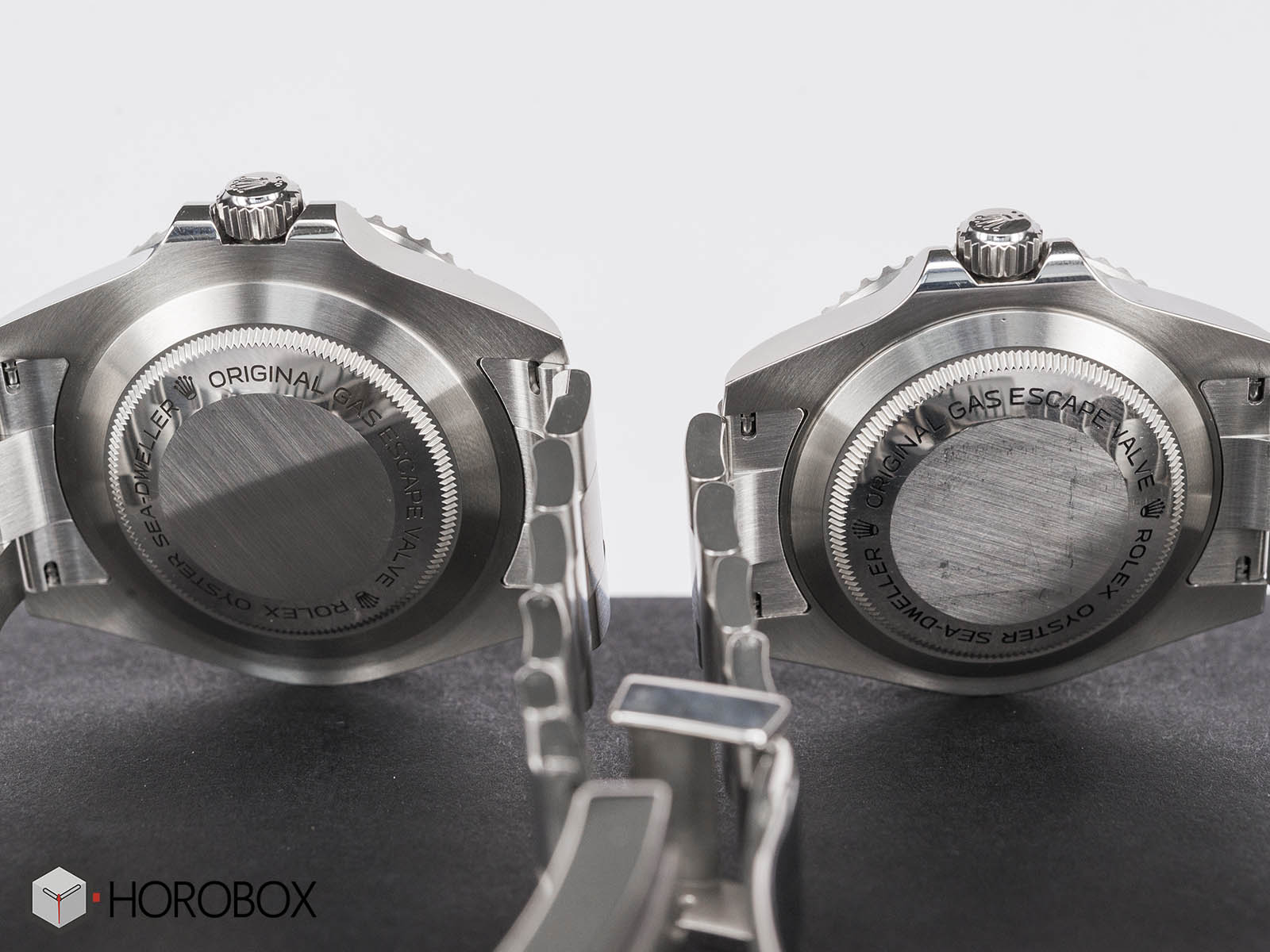 And I want to talk about some details that are not included in the official introductions. For example, the new model’s bezel is obviously bigger than the previous version’s. But Rolex has no official statement about that. Another difference is about the bezel pearls. The revamped Sea Dweller’s larger bezel is equipped with a bigger pearl. In addition, although the design of the Oyster style bracelets is the same, it is possible to capture some distinctive details in those bracelets as well. 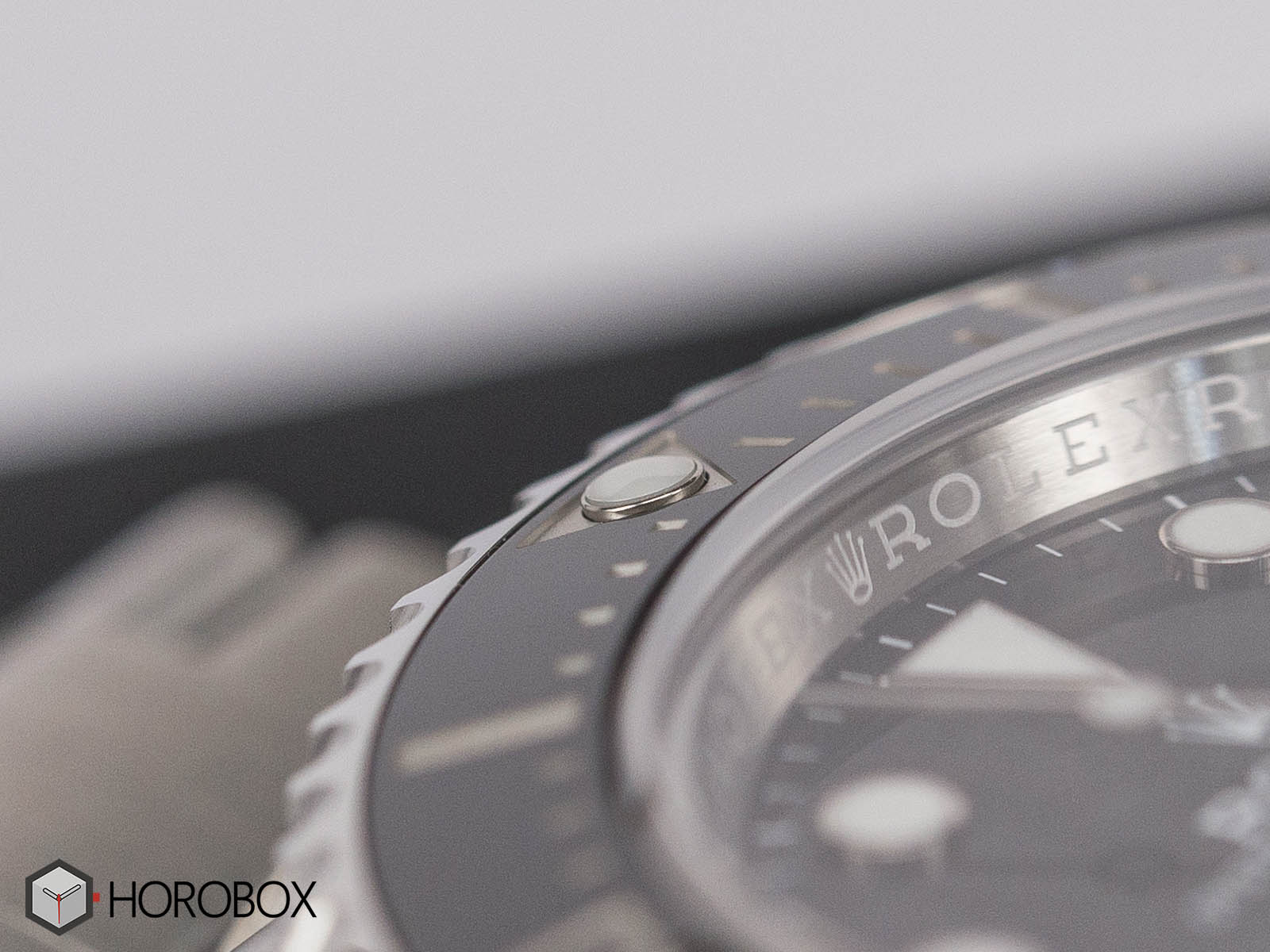 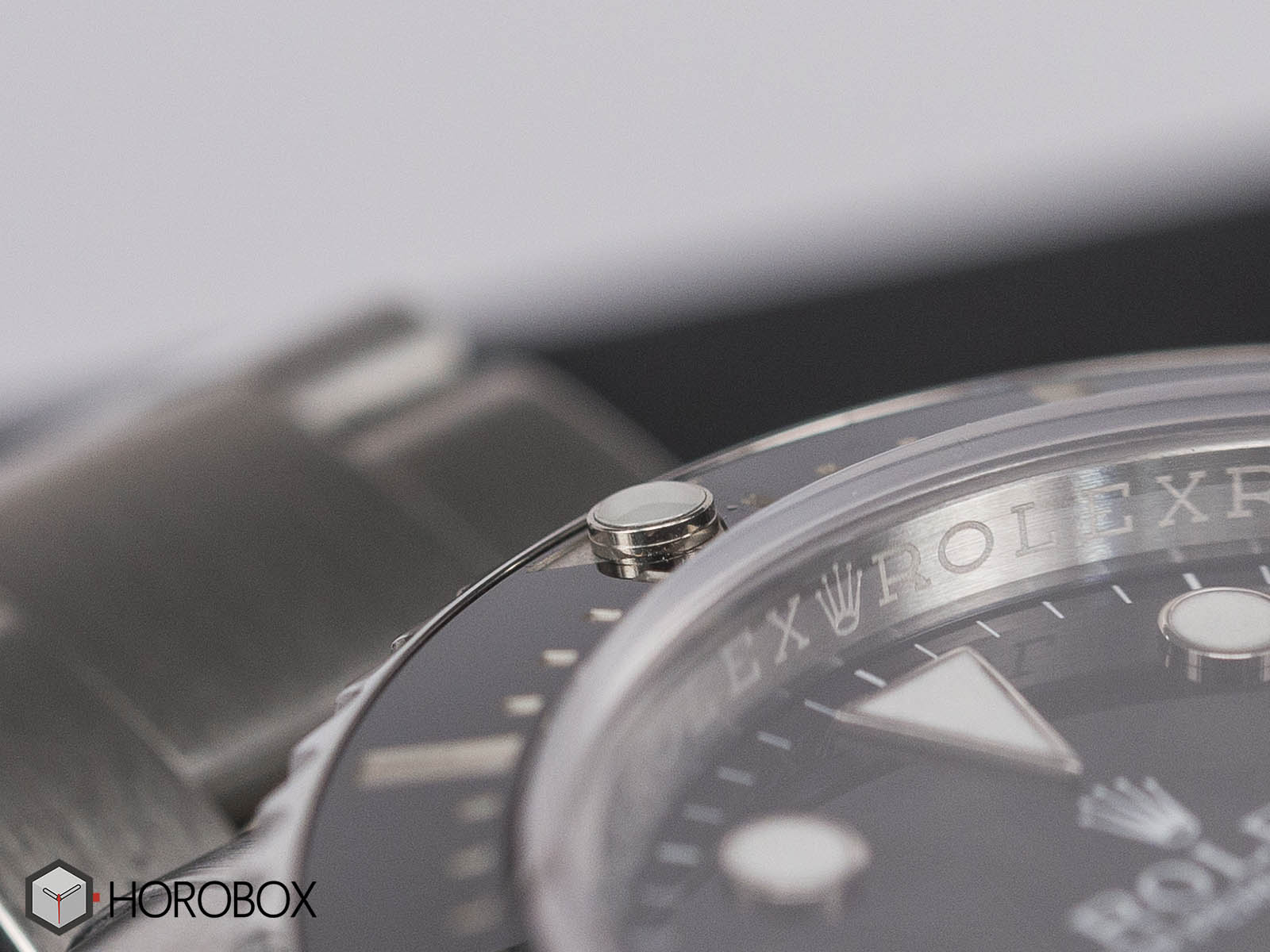 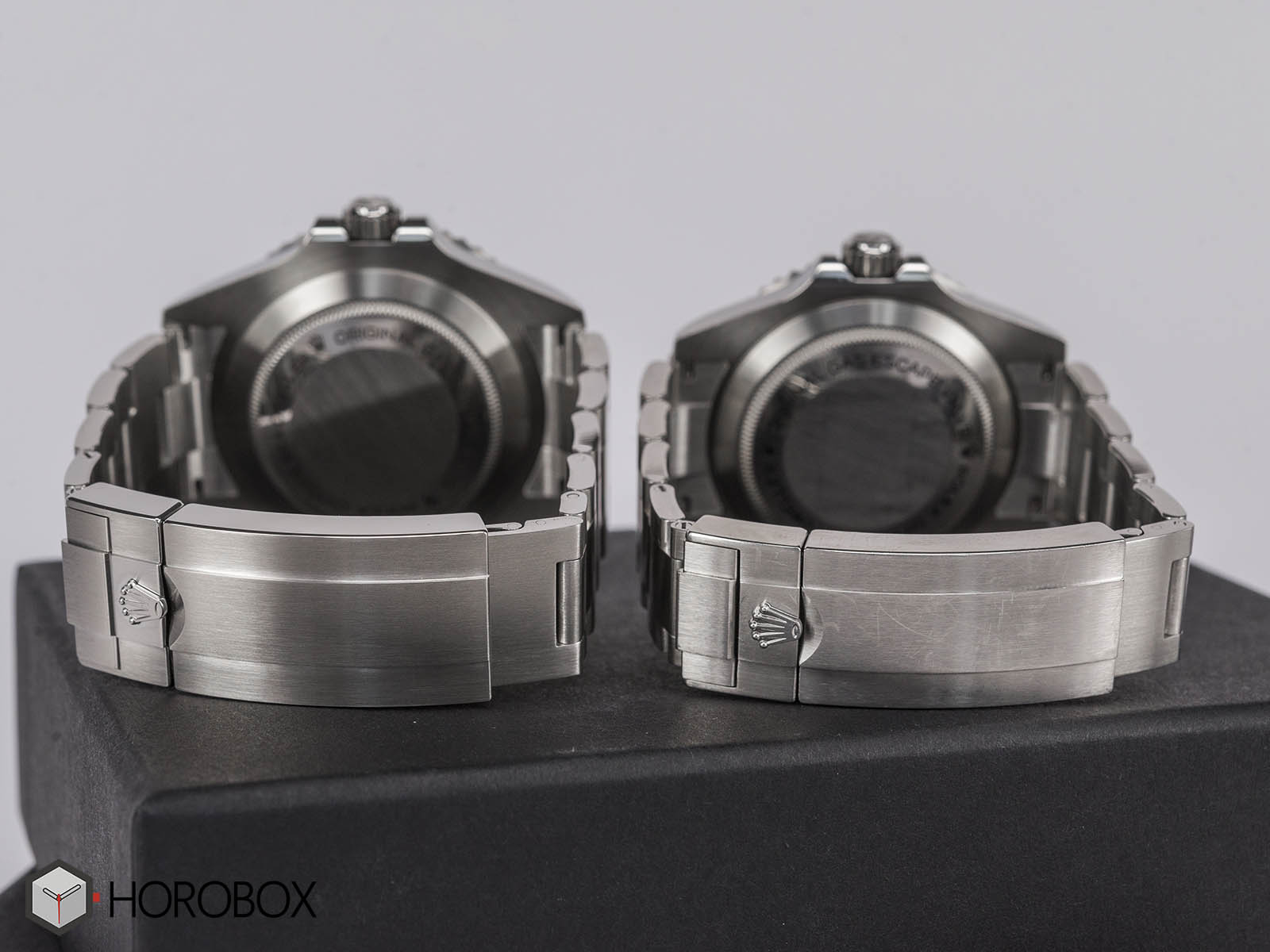 First of all, the Glidelock style folding clasp on the new version is designed to be wider than the old one. Likewise, the lug space of the new one is 1mm larger than the old version. A nuance about the bracelet is also present in the design of the end links. The end links in the Ref.116600 version sits slightly higher than the lug level while the ones at the Ref. 126600 sits below the lug level. I do not know if this is a technical benefit but in both models I have not seen any difference in terms of wearing comfort. 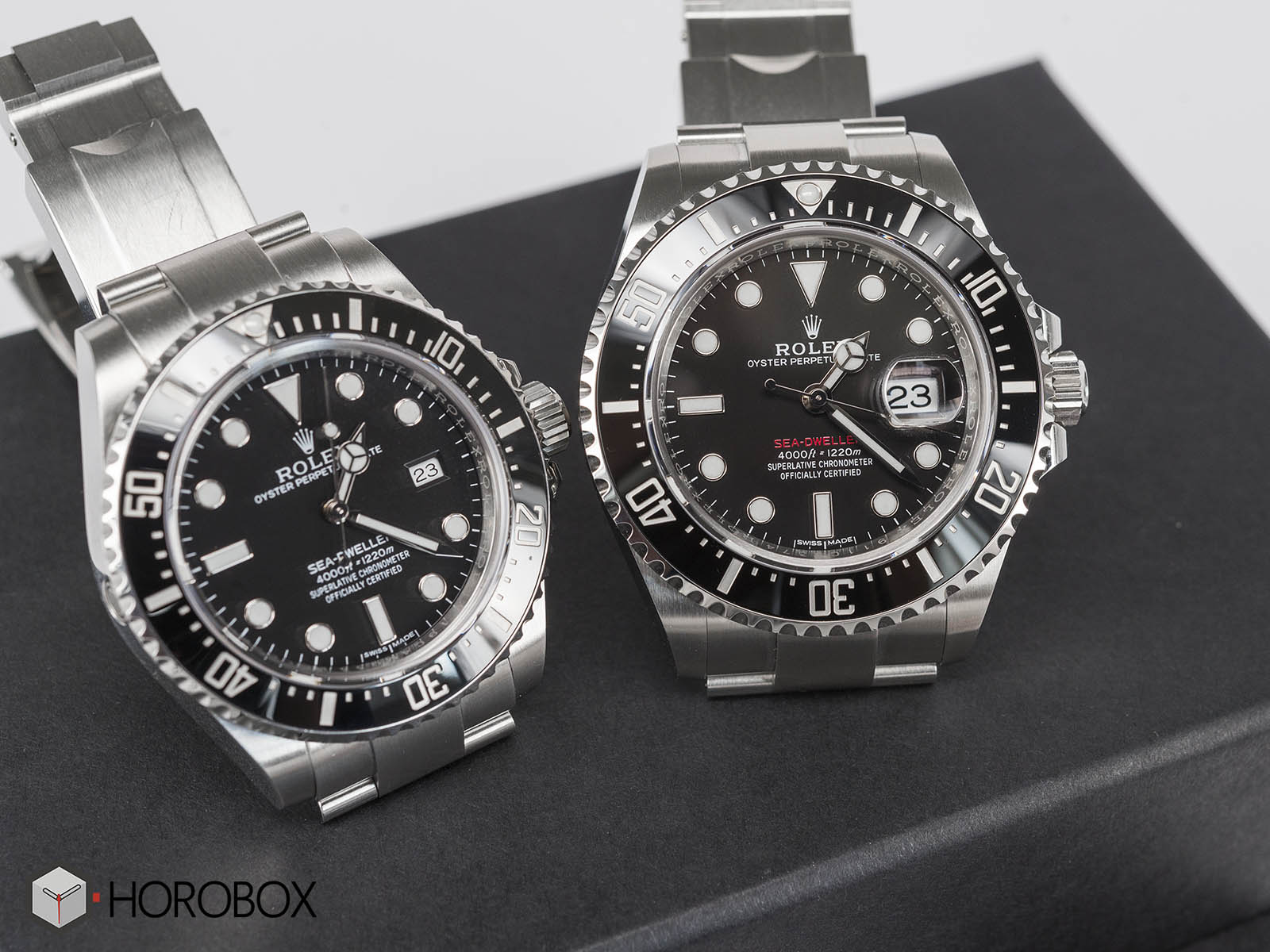 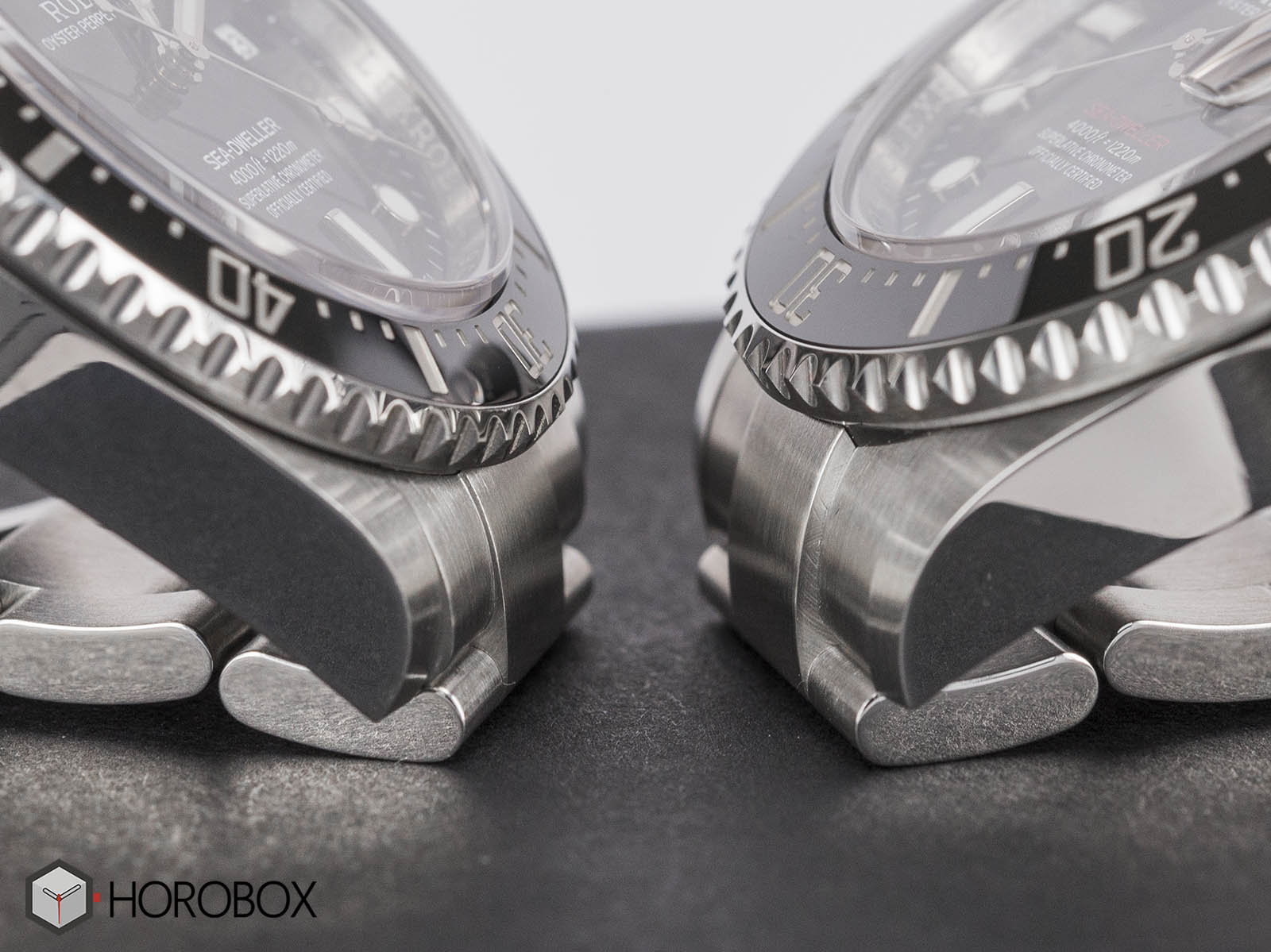 Sea Dweller met its new and exclusive case design in 2014 and separated from the Submariner (and GMT MasterII) model. The same goes for the new version as well because Ref. 126600 was also offered in a case that has been designed specifically for this new model. The new case, which looks more like a Deep Sea rather than a Submariner now, wears comfortably on the wrist (at least on my wrist) thanks to its slightly longer lugs. Let me add that the winding crown and crown guards are also larger than the Ref. 116600 version. 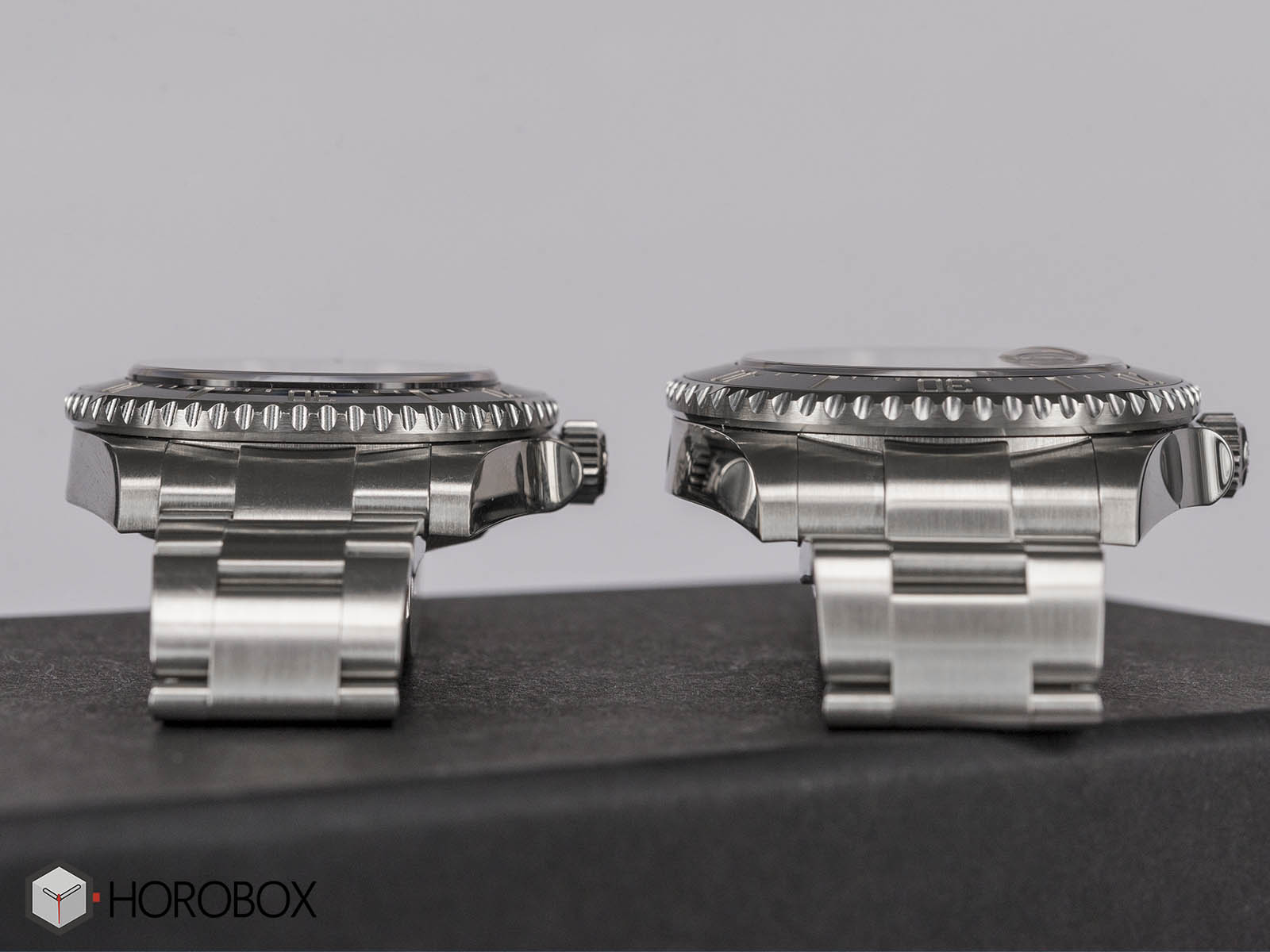 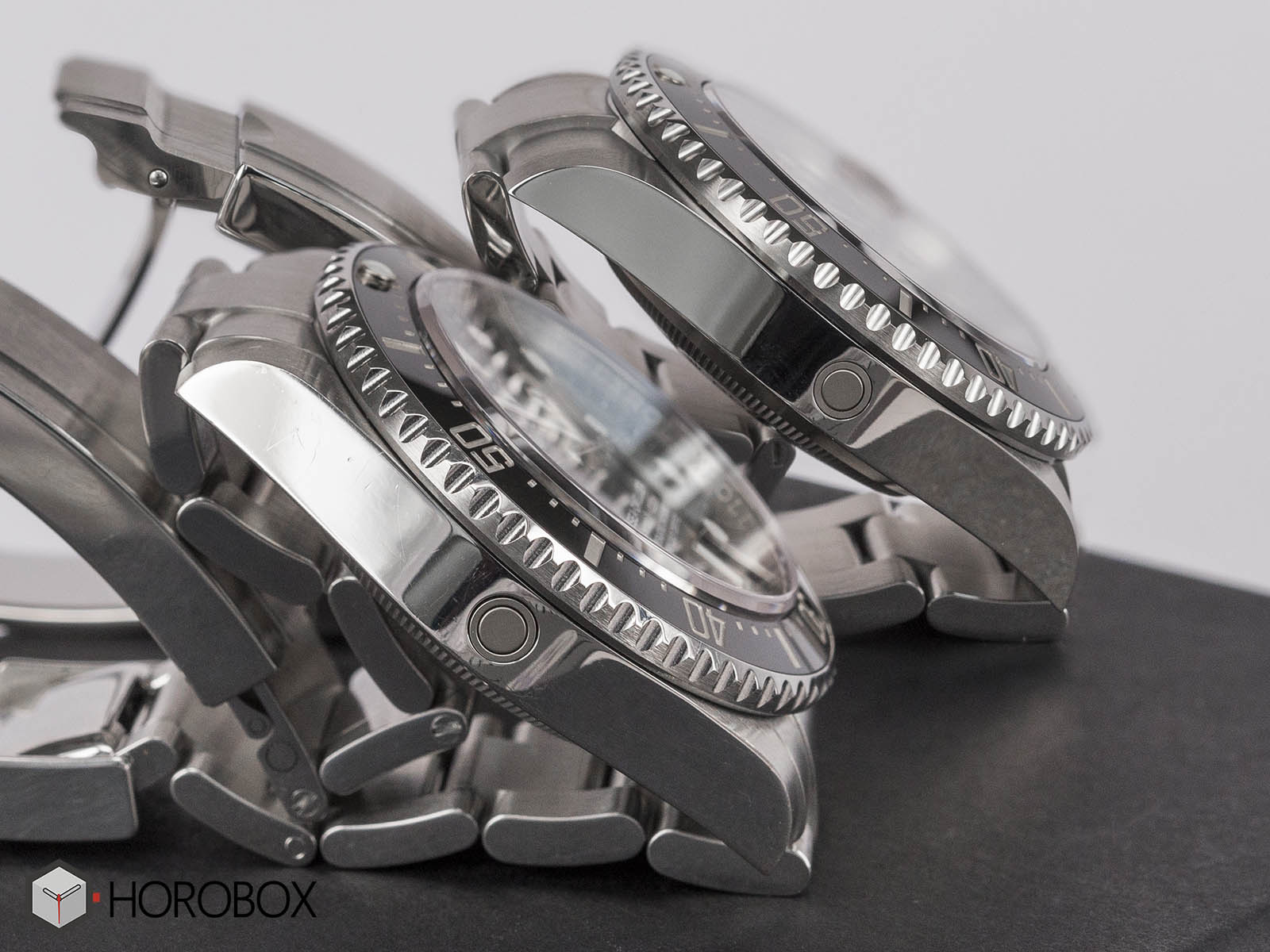 The 43mm case diameter is an important update because large case sizes are deal makers for some users, while others say exactly the opposite. The important thing here is; if you want to buy a new Sea Dweller you have to be happy with 43mm because now 40mm is only in Submariner. I cannot say that there is a remarkable difference between 40mm or 43mm because I am very comfortable with 44mm Deep Sea, but of course it is best to try in person before buying as the Sea Dweller is now bigger and heavier than ever.

I think the red Sea Dweller text on the dial is a perfect update. As a watch enthusiast who always admired the vintage Red Submariner and the Double Red Sea Dweller models, I can say that I have found this update to be excellent. I think that switching from a matt black dial to a glossy black one is also a good decision. 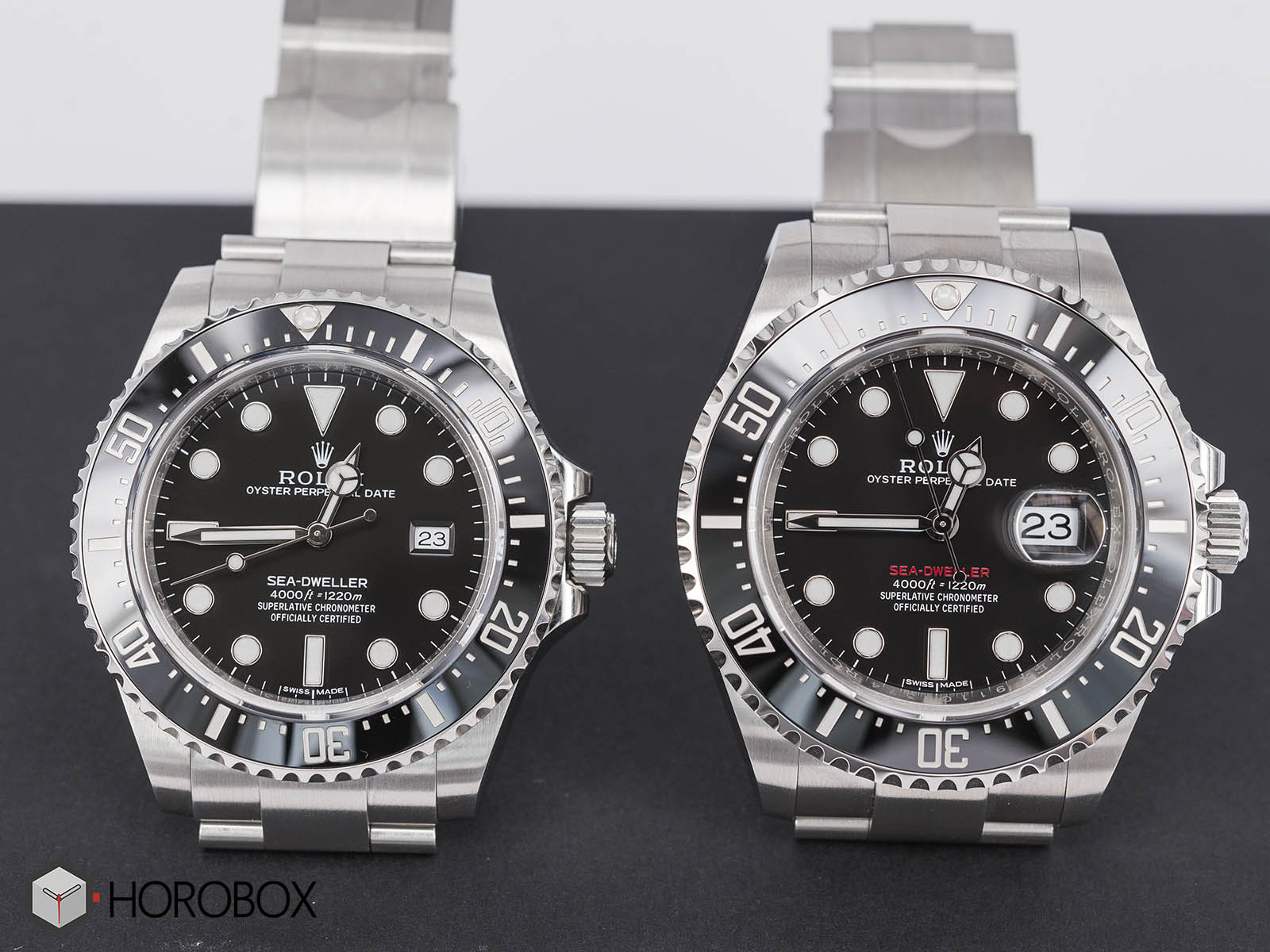 The difference between the last two versions of the Sea Dweller model family (at least the important ones, if not all, as some Rolex aficionados may come up and will tell us that the hour markers in the bezel of each version are different in length). It is difficult to say which one is better because, as a result of the updates made in 2014, the model has already taken on a new identity, so it is not possible to make a clear distinction as before and after 2014. In fact, it is not easy to tell for me either because I have not been able to make a decision about that magnifier yet. However, it looks like the Caliber Ref. 3235 and the red Sea Dweller text will make me forget about it at some point. Let me add that technical and cosmetic innovations are reflected in prices in the meantime; Ref.116600 was offered for sale with a price tag of 9900,00 CHF. The new version Ref. 126600 is on sale at a list price of 10800.00 CHF.