Ulysse Nardin, a well-known brand that has created its own fan base with the concept of Maxi Marine, has added a new model to the Freak series, which drew great attention at the SIHH 2018 with its features that push the boundaries of traditional watchmaking. The new model, which is the first automatic version to be produced up to now, offers important innovations both in terms of design and material. 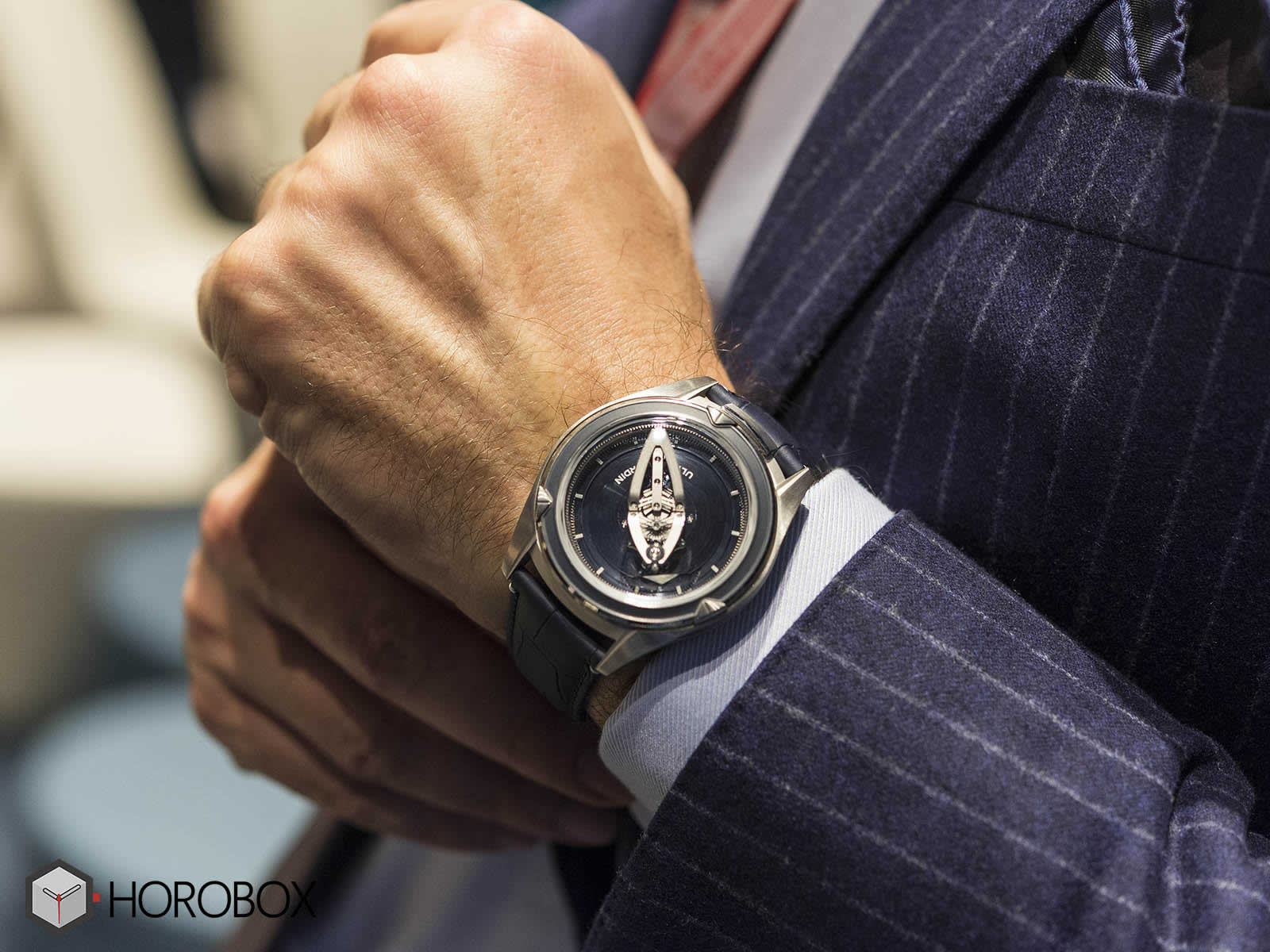 Introducing the first automatic watch in the Freak Collection, the Freak Vision: an Haute Horlogerie wonder incorporating the revolutionary innovations unveiled in the Ulysse Nardin InnoVision 2 Concept Watch at SIHH 2017.

Among the game-changers are a super-light silicium balance wheel with nickel mass elements and stabilizing micro-blades and an entirely new case design made even thinner by a box-domed crystal. 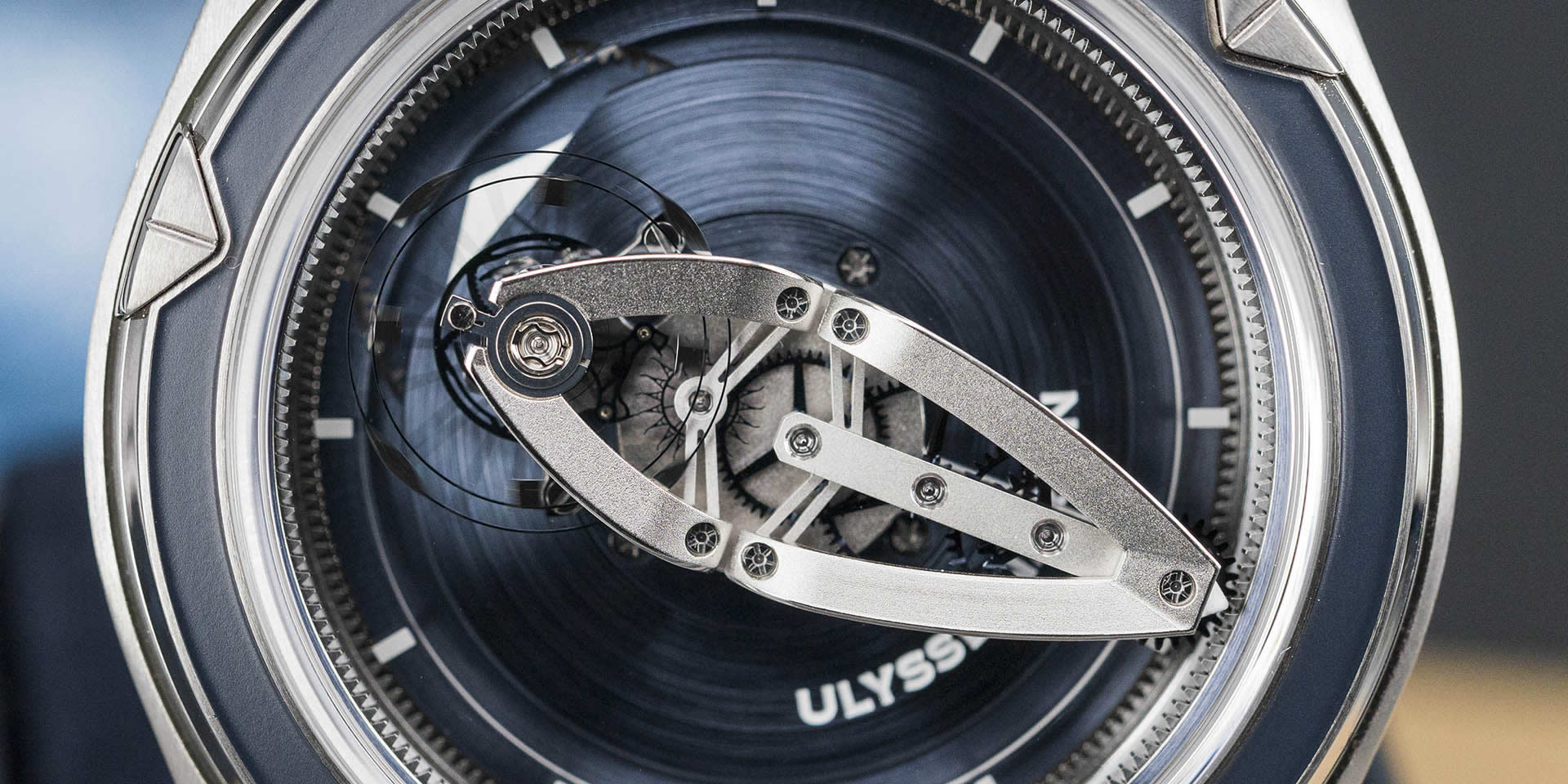 Time is still displayed in the “Freak” manner that sets the collection apart: by the baguette movement itself, a “flying carrousel” rotating around its own axis. Yet the design components are completely different. The new 3D carved upper bridge is inspired by a boat’s hull. The new box-domed sapphire allows for a thinner middle and bezel. Finally, the entire case itself is new—horns, bezel and the rubber on the side—making for a look that is much more open. 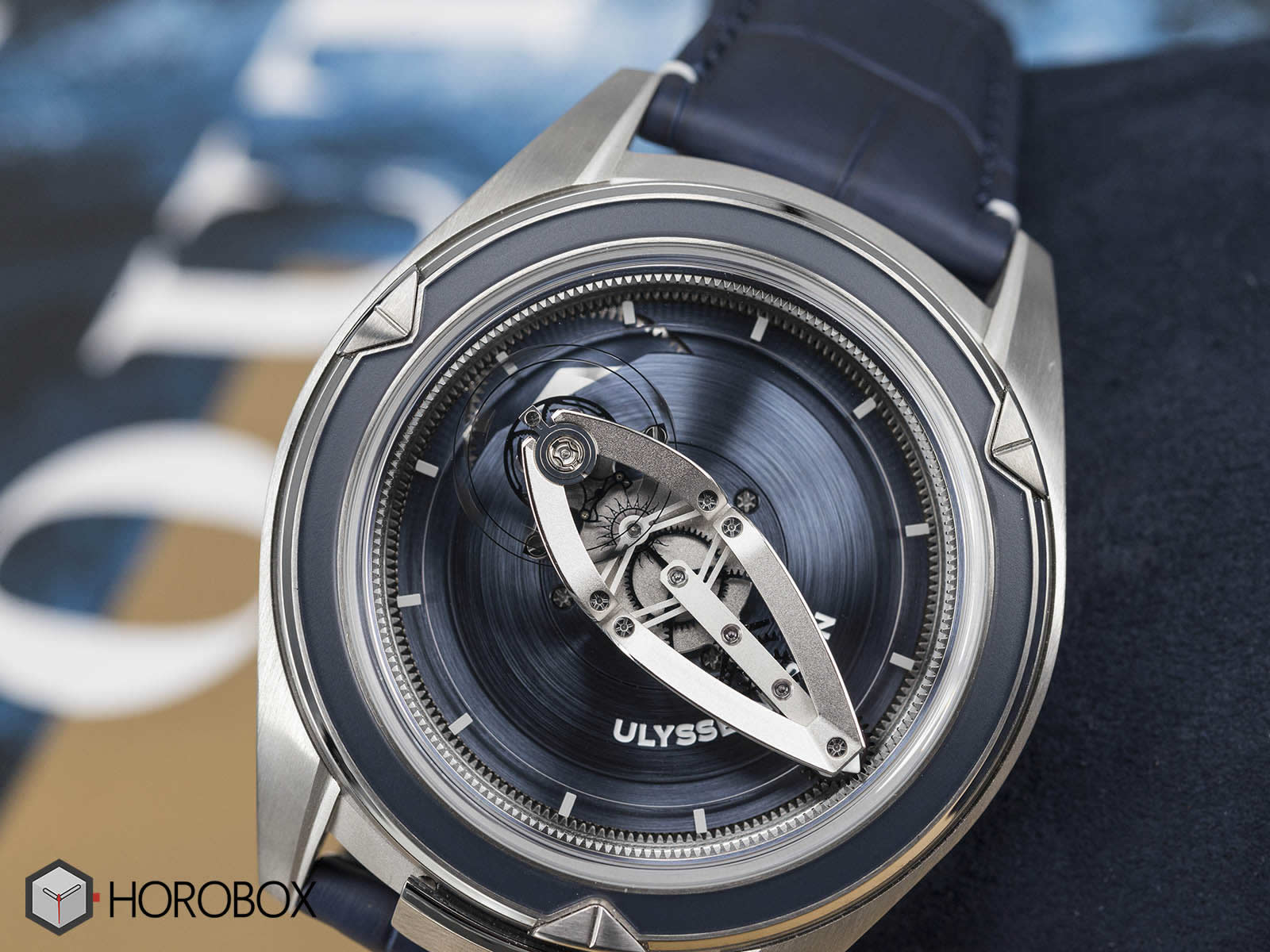 Ulysse Nardin is a pioneer of innovations in timekeeping, not least for its unprecedented mastery of silicium, which it introduced to Haute Horlogerie in the first Freak timepiece, in 2001. Now it audaciously pushes the technology further by welding it—another patented first—with solid nickel elements, to create an extremely light balance wheel. It then adds silicium micro-blades in order to stabilize amplitudes and significantly increase accuracy. 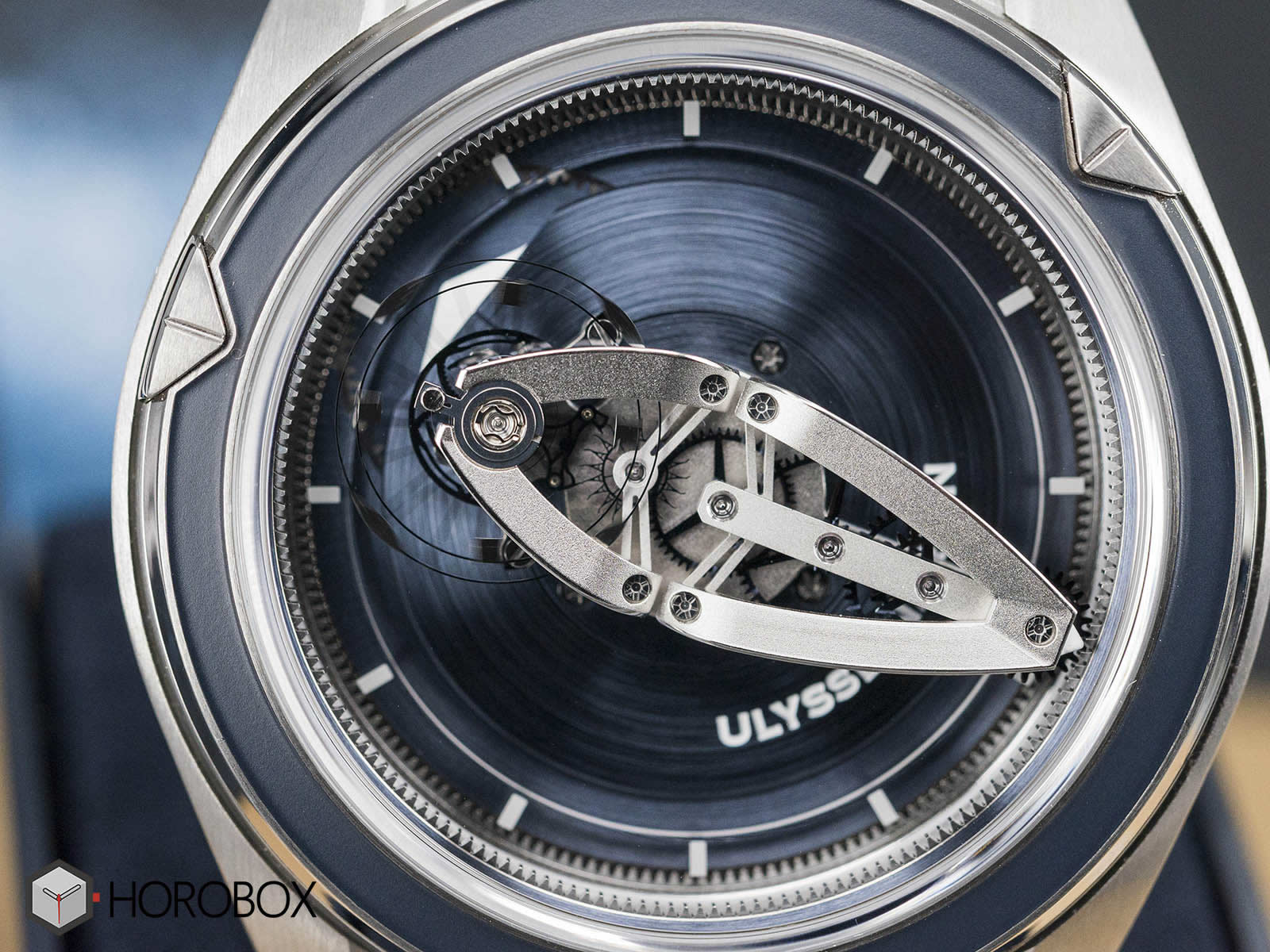 The Grinder Automatic Winding System, which completely revolutionizes energy transmission, surpassing existing systems for efficiency drastically. Grinder takes perfect advantage of even the slightest movement of the wrist. The oscillating rotor is linked to a frame containing four arms, which gives the automatic system twice the torque – like having four pedals on a bike instead of two – while a flexible guidance mechanism drastically limits friction. The fully in-house movement offers a power reserve of 50 hours when fully wound. 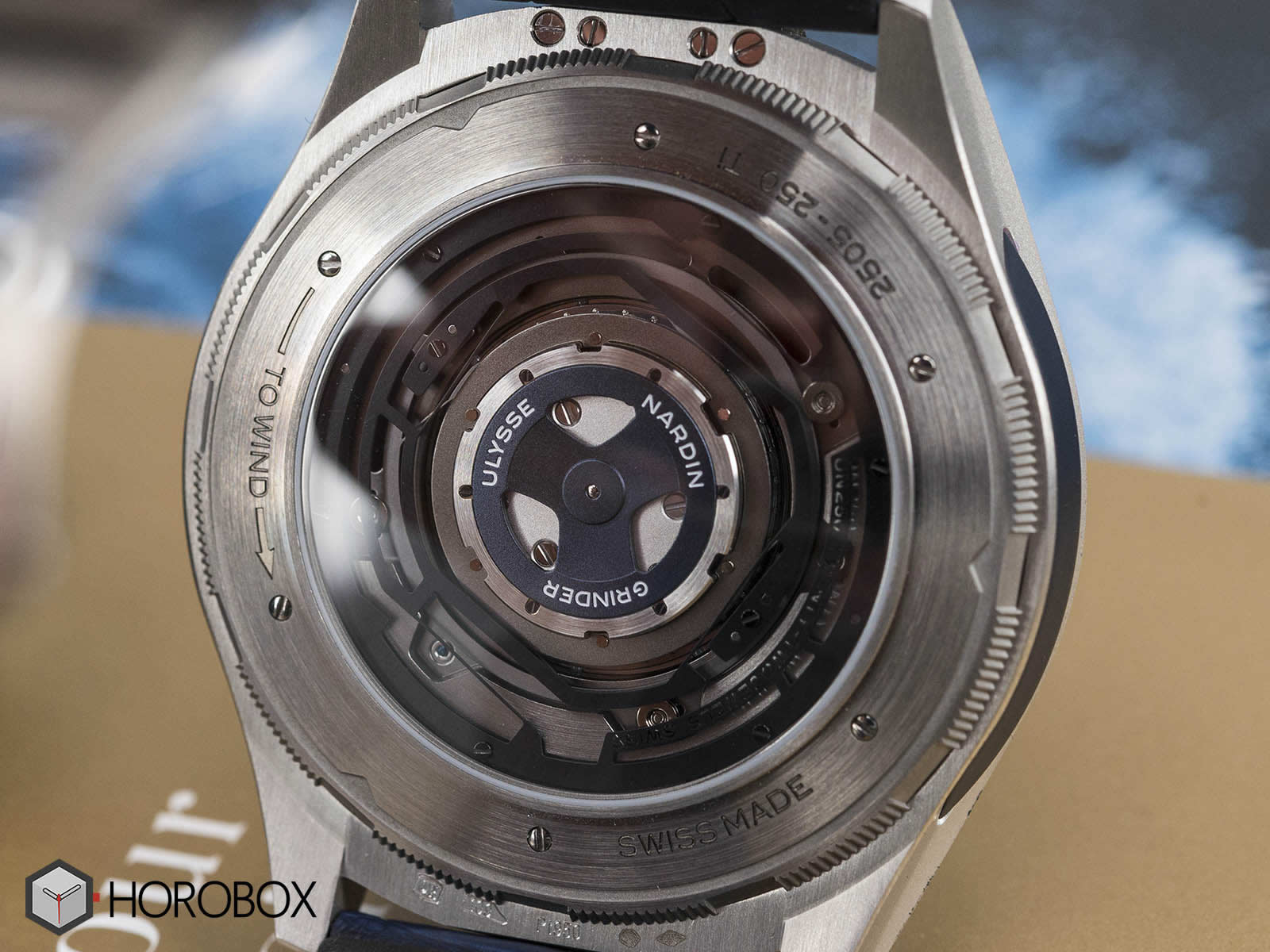 The Ulysse Nardin Anchor Escapement is based on the principle of flexible mechanisms, exploiting the elasticity of flat springs. It presents a constant force escapement made entirely of silicium, and features a circular frame with a pallet fork that moves without friction. The pallet fork is fixed in the center and supported in space on two minuscule blade springs. Mounted perpendicular to each other, they are subjected to a bending force that curves and keeps them in a bi-stable state. The result is a positive energy balance that maintains the oscillations of the balance wheel at a constant rate without influence of torque variation from the mainspring. 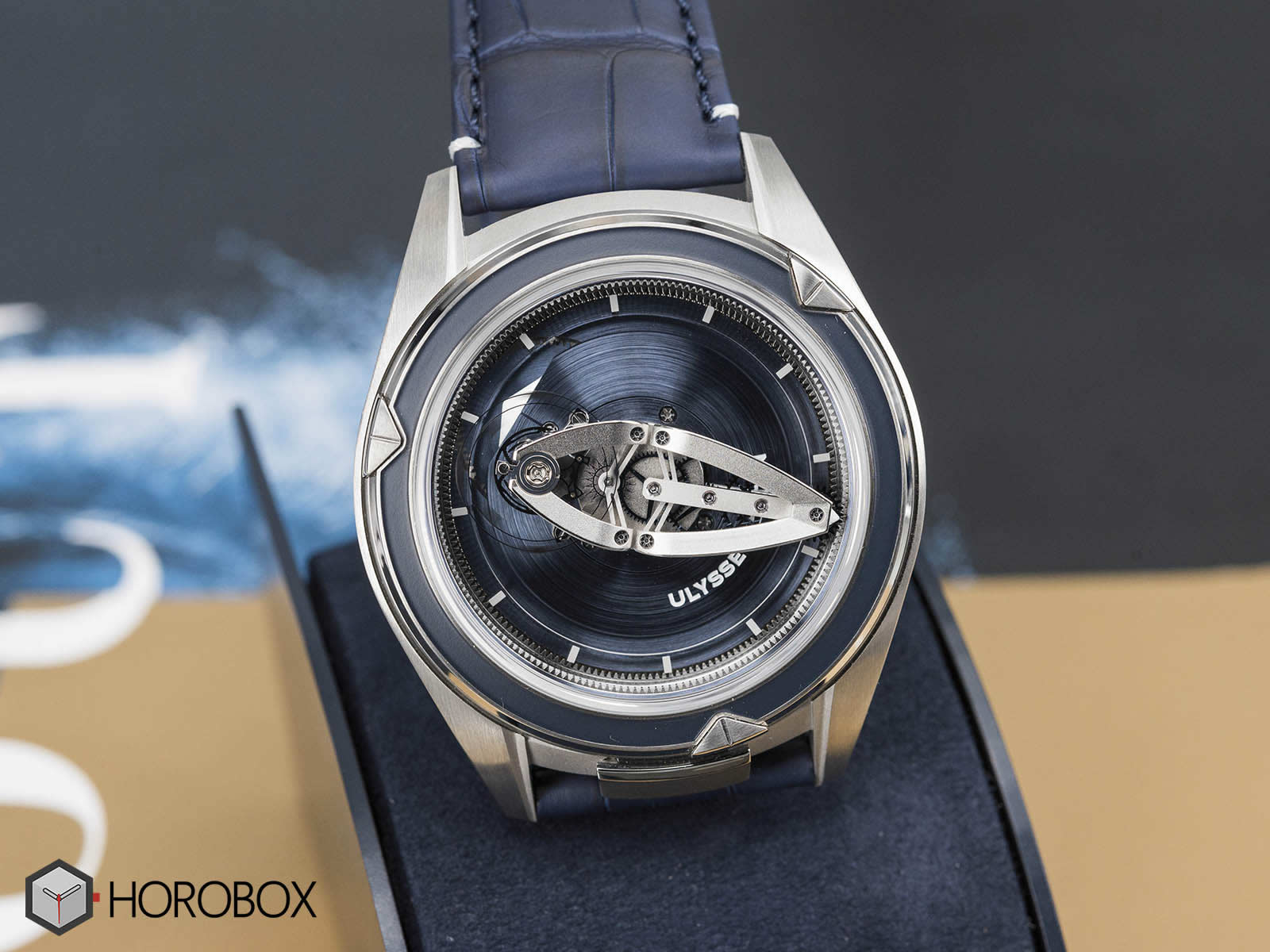 The new model comes in a platinum case with rubber details on the sides. 45mm diameter case is equipped with double AR coated scratch-resistant sapphire crystals on both sides and it is water resistant to 30 meters. Titanium coated and blue rubber lining bezel on the front side of the case sets the time. The movement can be wound manually by using the titanium bezel at the caseback. 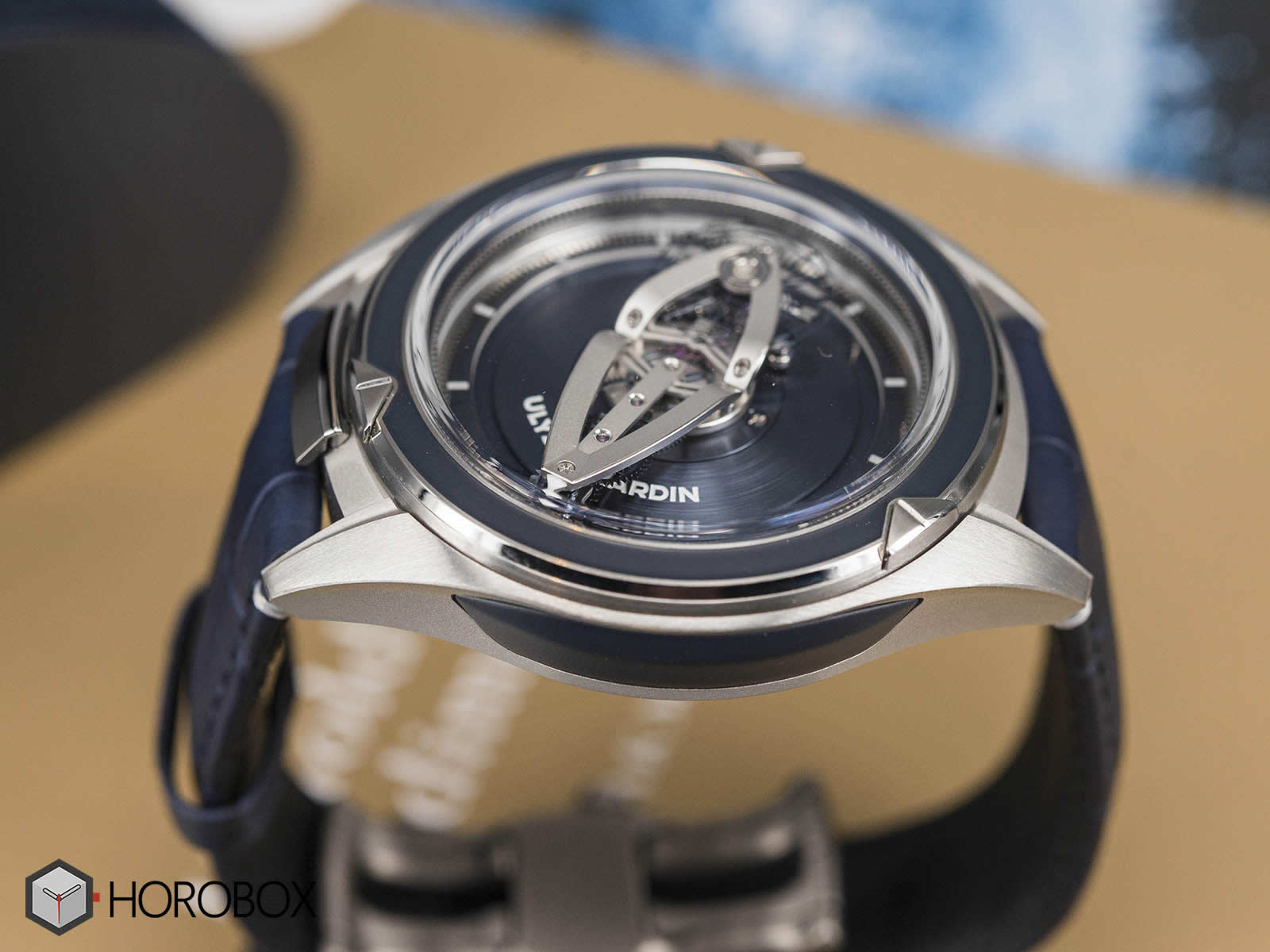 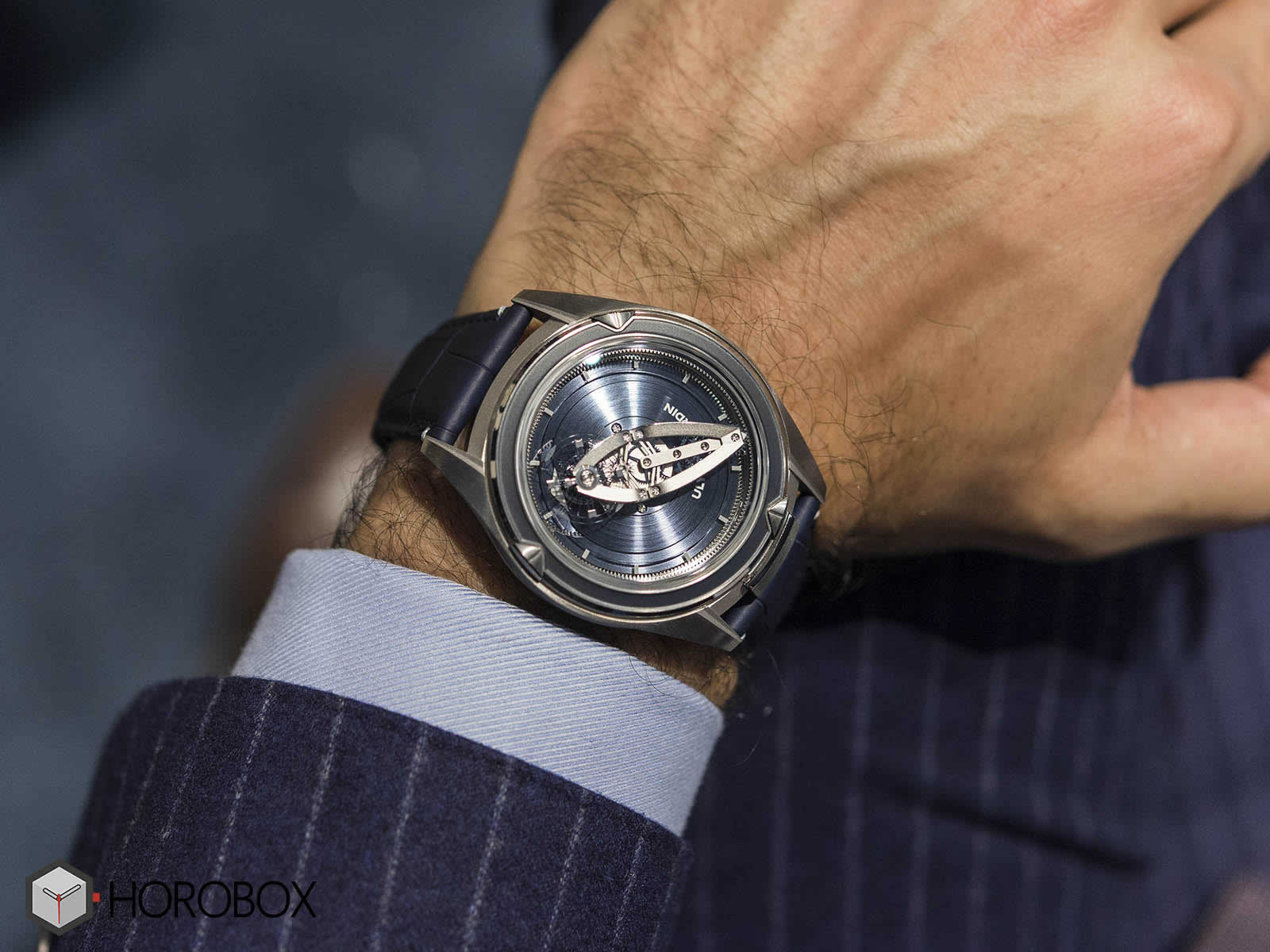 The new model comes on an alligator strap with rubber lining. The strap is secured by an Ulysse Nardin signed folding clasp made of titanium. MSRP for the model is CHF 95.000,00 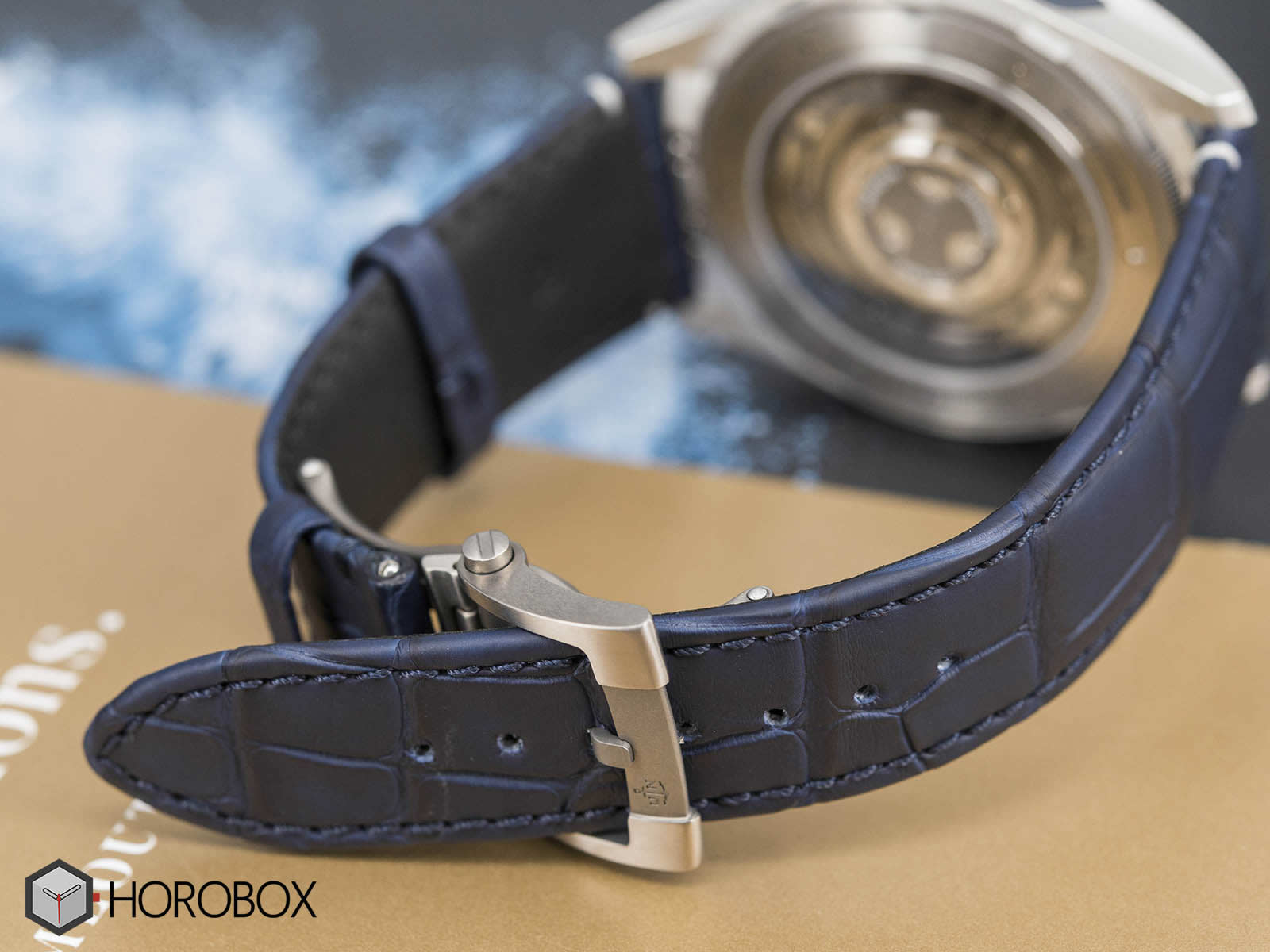