We look at the history and technologies of Sinn, one of the most special brands of German watchmaking.

II. Helmut Sinn, a former flight instructor who served as a pilot in World War II, founded Sinn Spezialuhren in 1961 in Frankfurt am Main to manufacture navigational watches and chronographs. Helmut Sinn is also known for his contributions to the establishment of the Bell & Ross brand, famous for its aviation-themed watches. 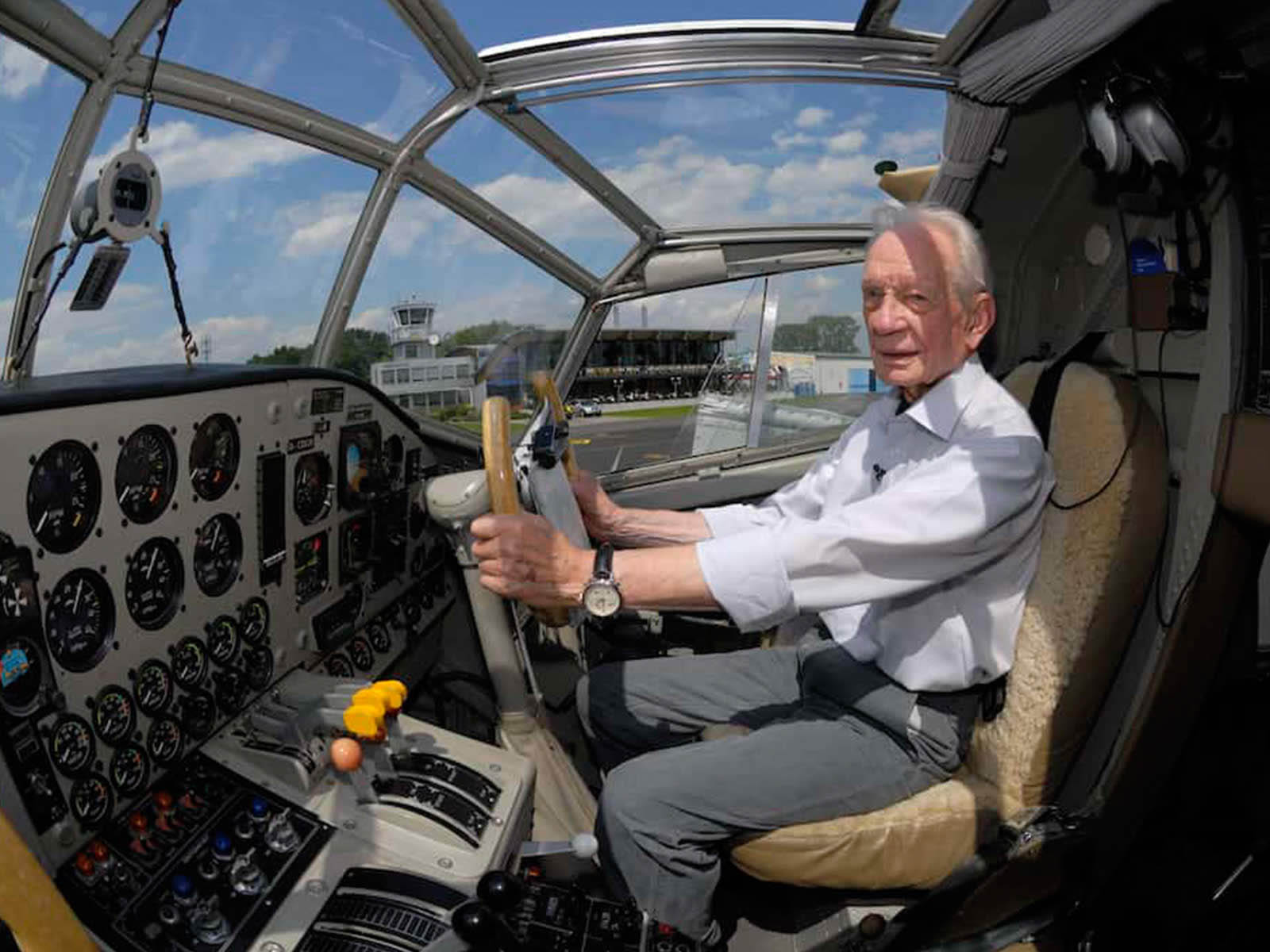 Although the information Sinn provided in terms of brand history in the following years is limited, it is possible to compile the important topics as follows: In 1985, German physicist and astronaut Dr. Reinhard Furrer goes into space with the Sinn 140S model during his D-1 space laboratory mission. Thus, it is understood that automatic watches can also be used in a gravity-free environment. In 1992, astronaut Klaus-Dietrich Flade uses the Sinn 142S model on his mission to the MIR space station. In 1993, the Sinn 142 model begins its space tour again, and in D-2, the second German space laboratory mission, astronauts travel a distance of 6.7 million kilometers, 160 laps around the world, in 10 days aboard the NASA space shuttle Columbia. 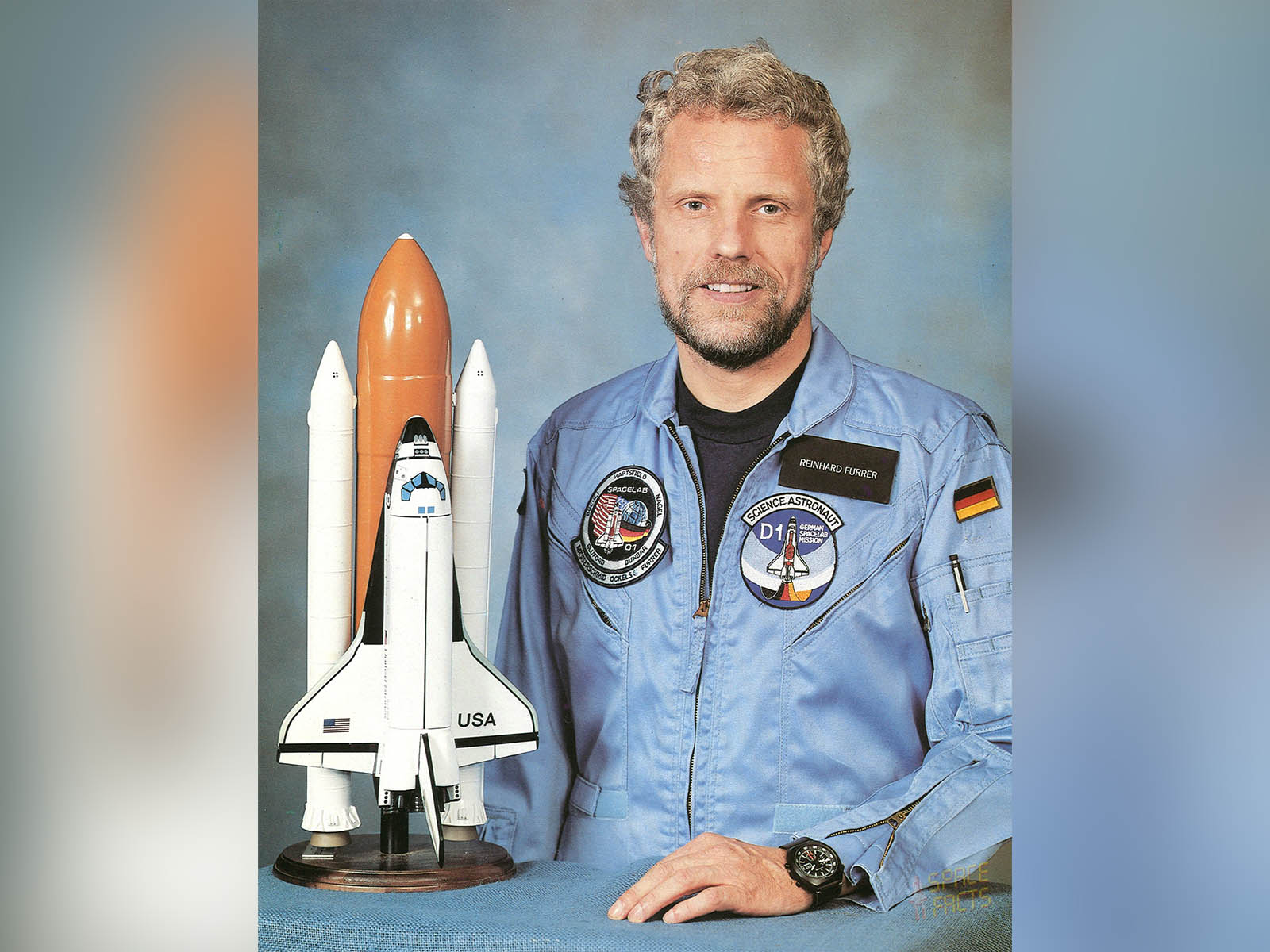 1994 is considered to be one of the most important years in the history of Sinn after its establishment. German mechanical engineer Lothar Schmidt buys the Sinn brand on September 1, 1994. Before this acquisition, Schmidt was working at IWC and contributed greatly to the re-establishment of another German watchmaking legend, A. Lange & Söhne. Schmidt, who was responsible for technical development at IWC, apparently needed a space where he could freely embody his vision and dreams. In this way, the foundations of one of the most special brands of today's watch world were laid. 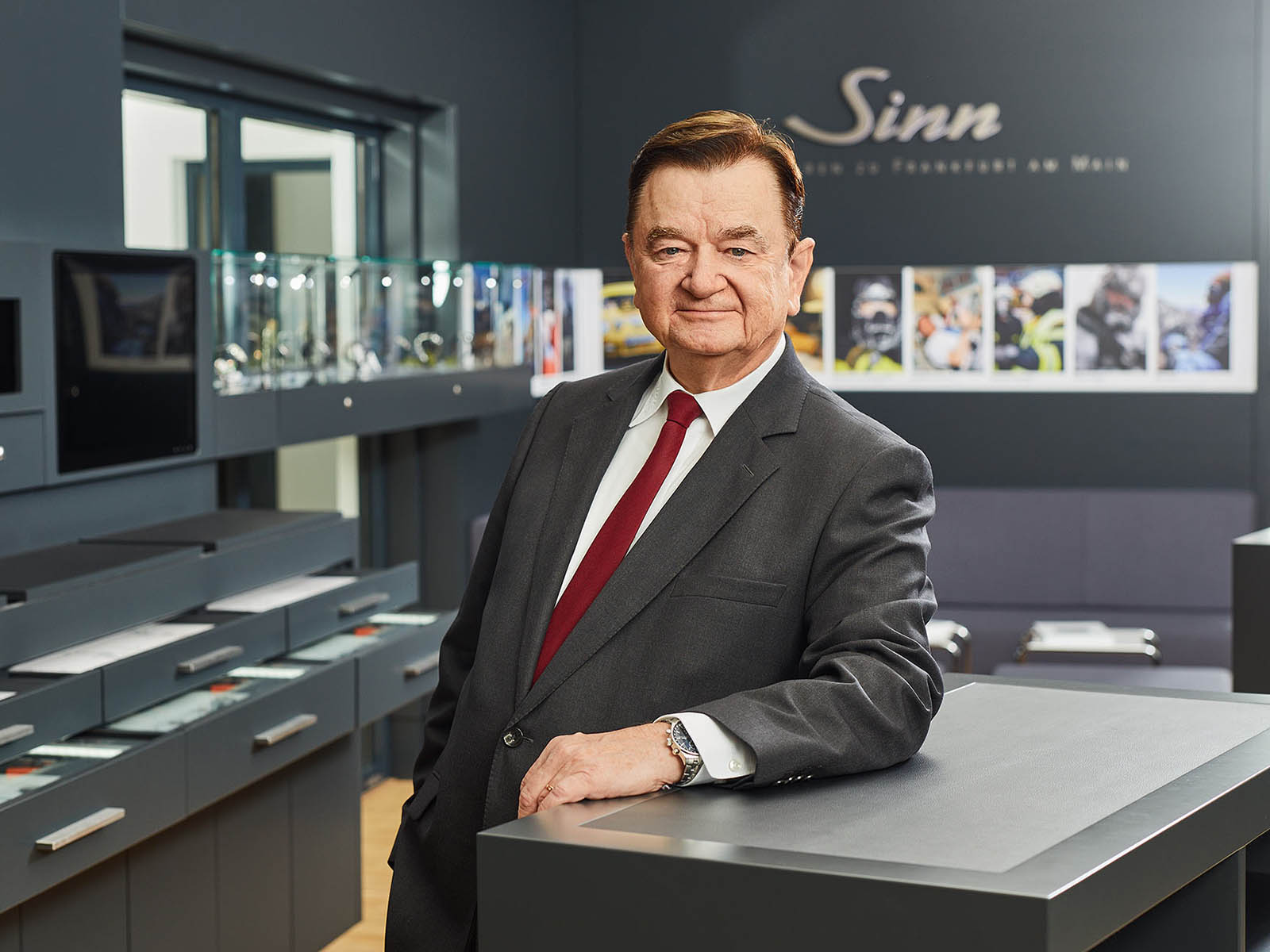 Lothar Schmidt was an engineer and set out to produce the first model by rolling up his sleeves to combine superior German engineering with timepieces under the umbrella of Sinn. Model 244, in titanium, achieved resistance beyond even DIN standards with its anti-magnetic properties. 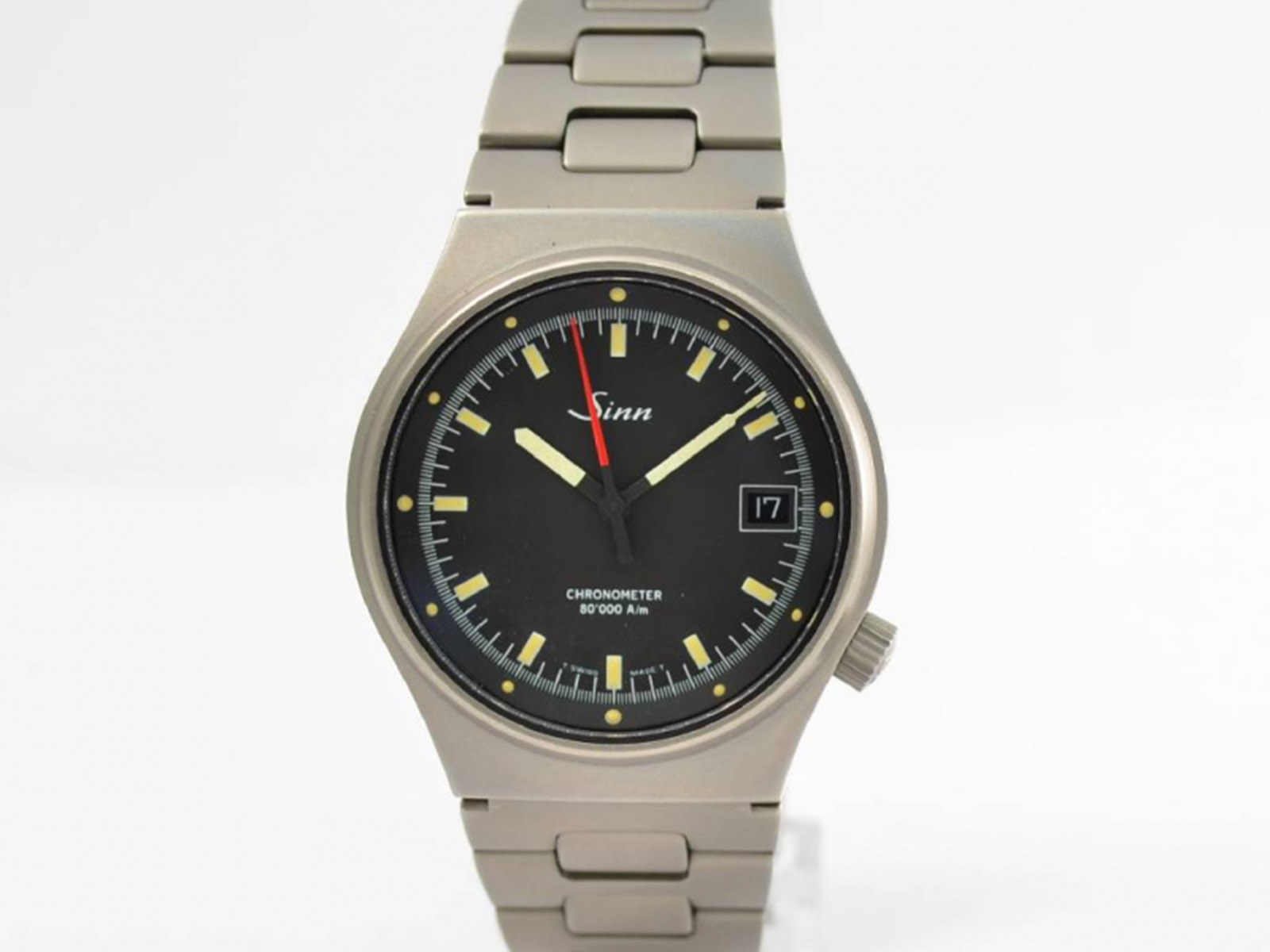 The brand introduced its first gold watch in 1995. The interesting thing is that although this watch has a gold content of 22K, which we are not used to in the industry, the hardness value of the case was almost as high as stainless steel (220HV).

In the same year, Ar-Dehumidfying technology, which prevents the crystal from fogging in sudden temperature changes, and the first model 203-Ti equipped with this feature were introduced.

In 1996, Hydro technology was introduced, which provides superior water resistance and legibility for the dial in all conditions. The 403 Hydro model, filled with liquid, opened the doors of an extraordinary category.

In 1997, Sinn introduced the EZM1 and EZM2 models, designed specifically for the special police force's GSG9 units. Underlining that precise timing points to the difference between life and death, Sinn aimed for maximum legibility in this series. 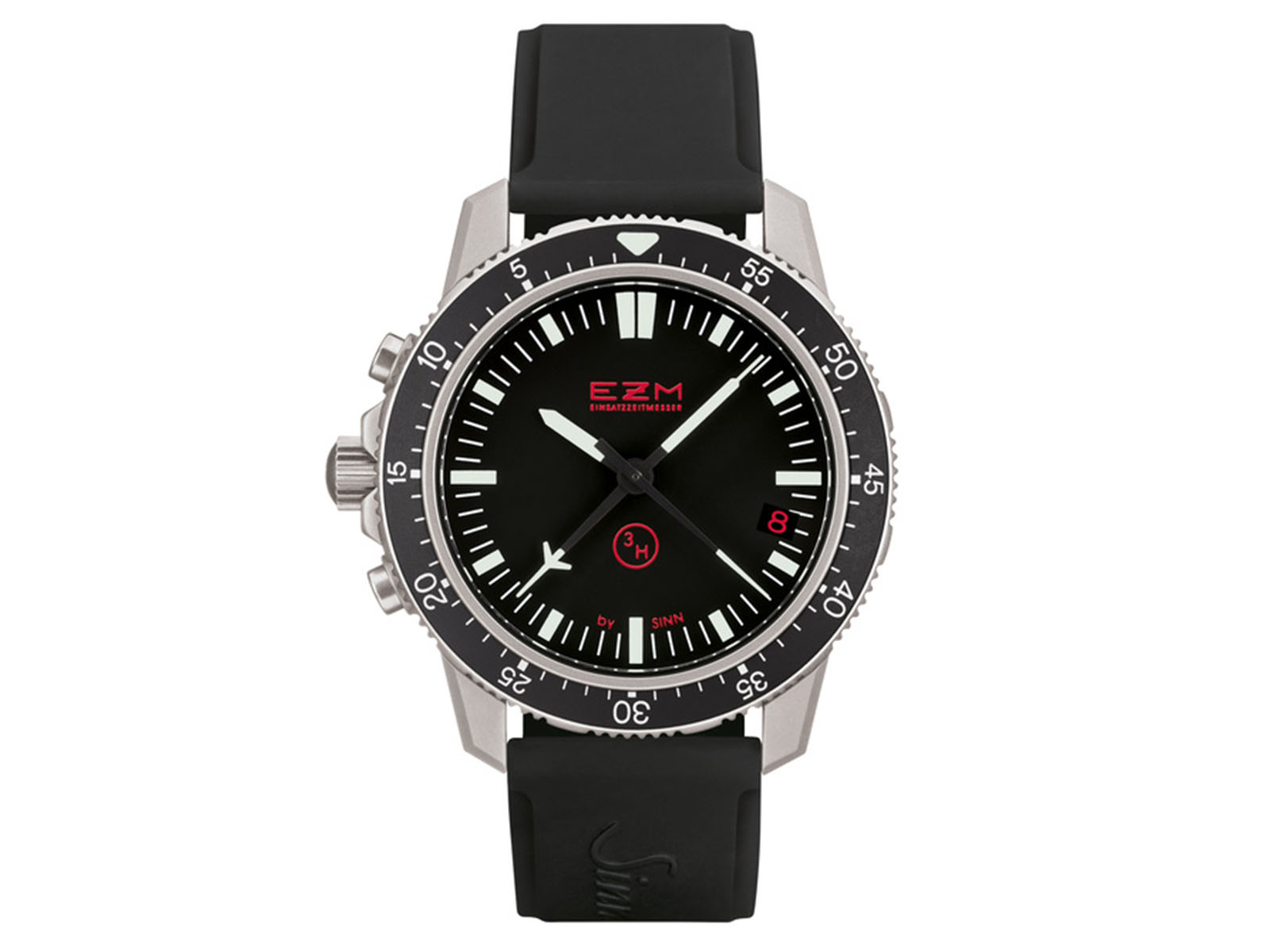 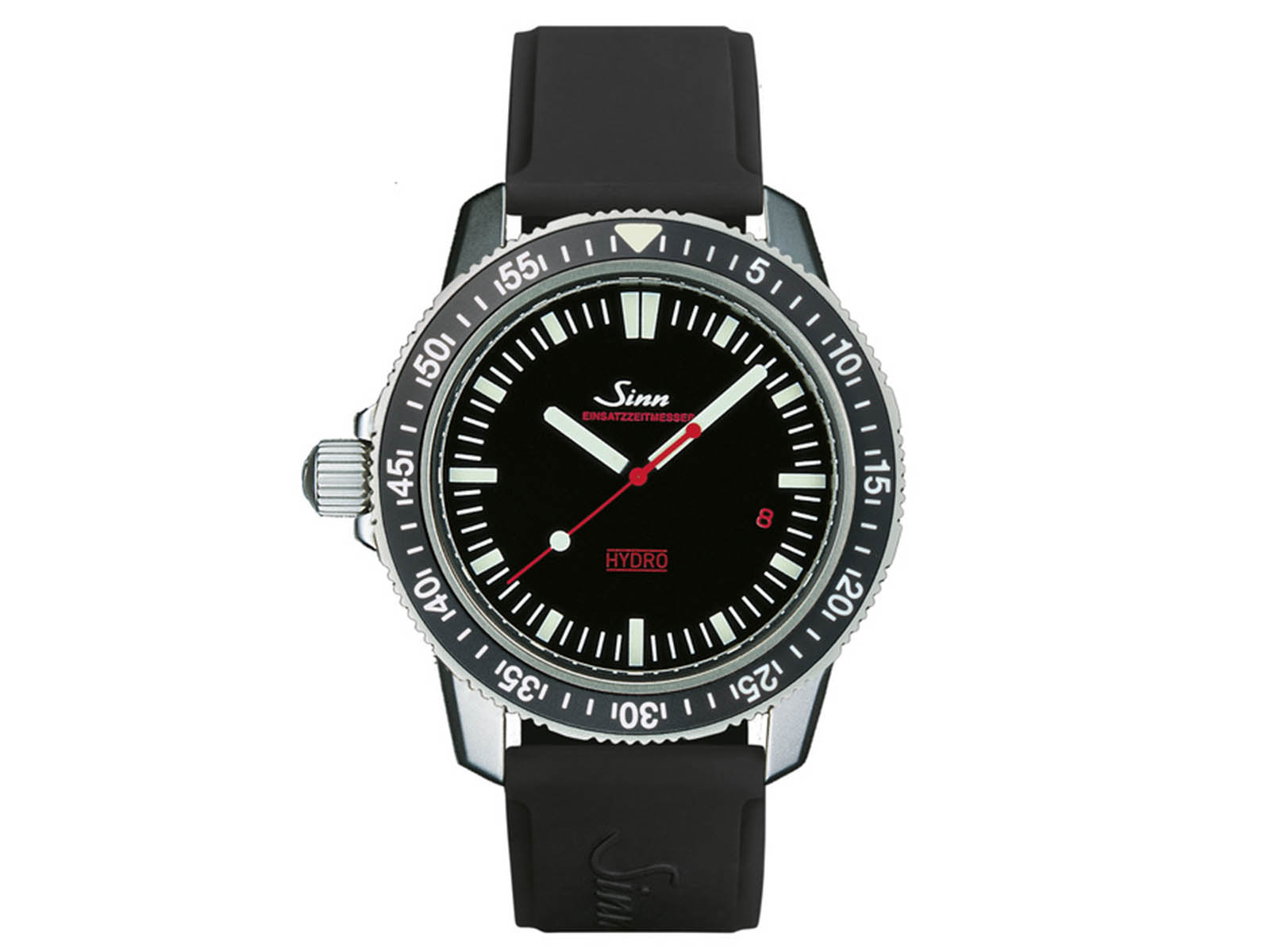 In 1998, Ar-Dehumidfying technology was combined with the special 66-228 oil developed by Sinn, and the first watch, the 303 Kristall, which can remain functional in the temperature range of -45 to +80 degrees Celsius was introduced. In the same year, the 103 Ti Ar model won the “Goldene Unruh” award. 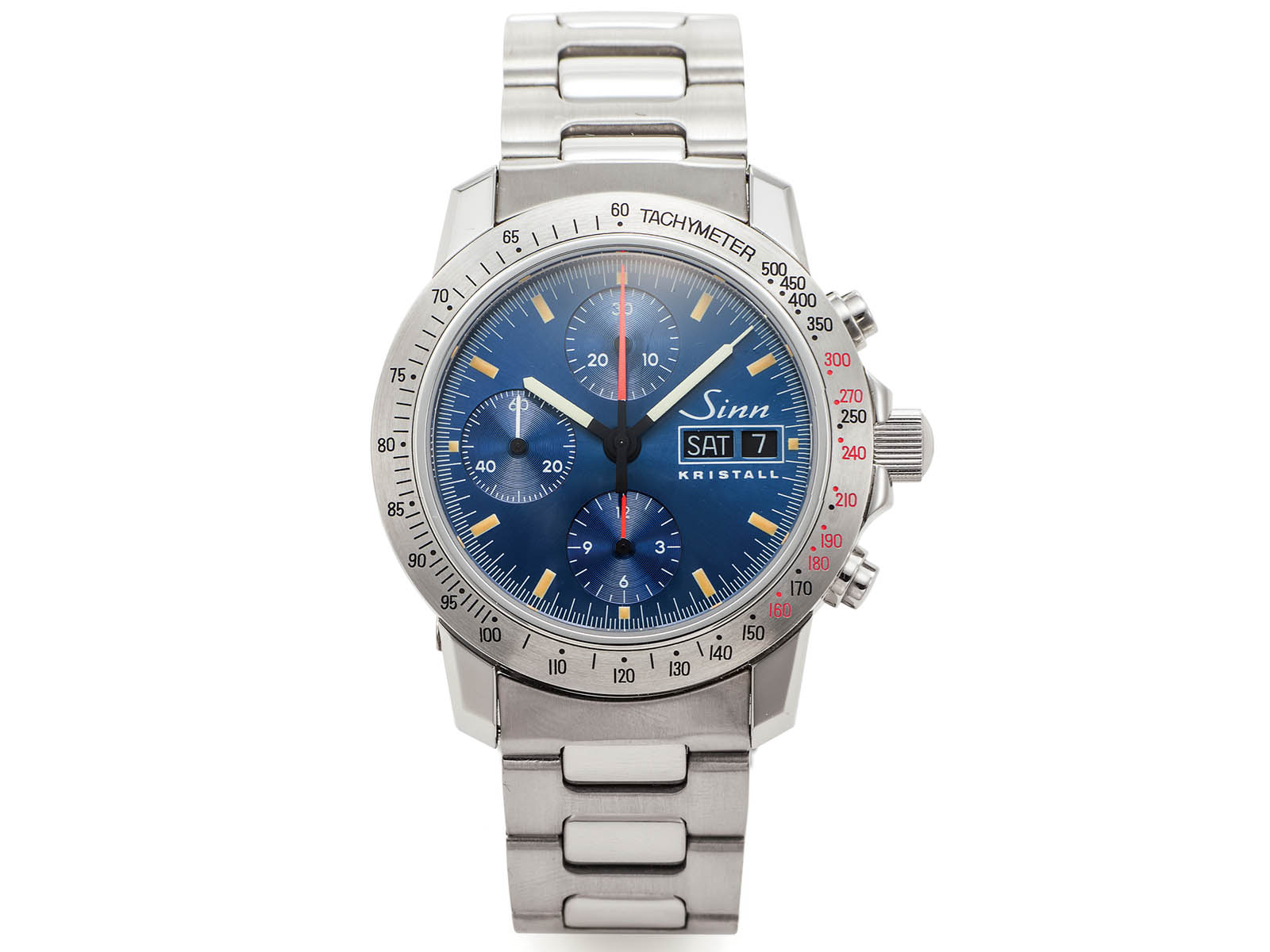 In 2001, the 6000 Jubilee was introduced, the first model to feature DIAPAL technology that does not require lubrication and improves the reliability of the watch in the long run. This watch was also the brand's first model with an 18K white gold case.

In 2003, the 756 was introduced, the first timepiece with Tegiment technology, which offers exceptional hardness for stainless steel watches, thus bringing durability. 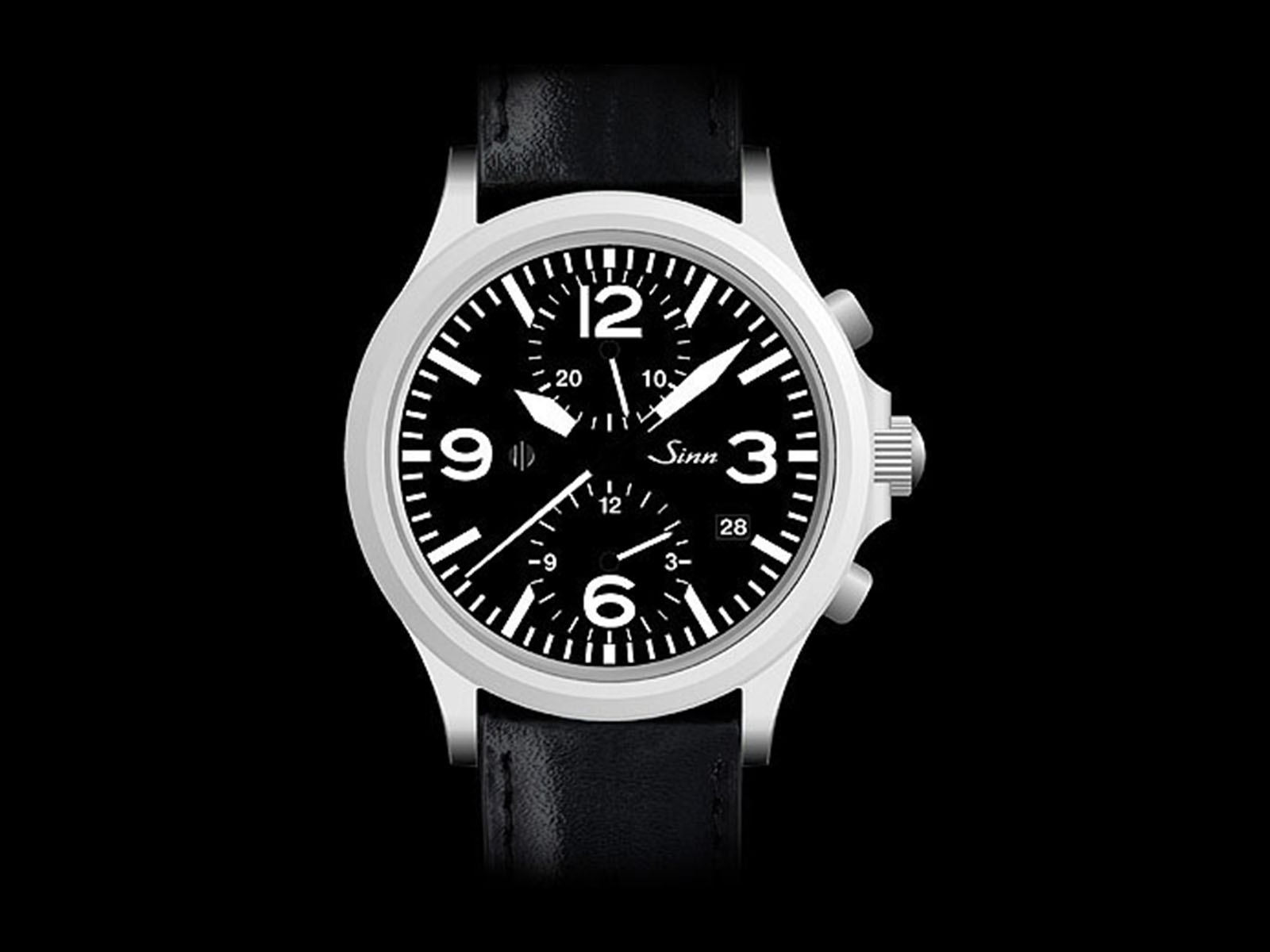 In 2005, special alloy stainless steel used in the hulls of German submarines began to be used in Sinn's submersible models.

In 2006, Sinn 756 and 900 models began to be attached to the wrists of crash test dummies during tests carried out at the Dekra Technology Center in Klettwitz, Germany. In this way, it was also revealed how seriously the brand took the issue of durability.

In 2012, Aachen University of Applied Sciences and Sinn Spezialuhren presented the first technical standard for pilot's watches (Technischer Standard Fliegeruhren – TESTAF) at the German headquarters in Donauwörth of Airbus Helicopters (formerly Eurocopter), a leading helicopter and aircraft component manufacturer. The development of this technical standard broke new ground as previously there was no suitable standard for pilot's watches. The result of a research project led by Sinn Spezialuhren, TESTAF enabled a pilot's watch to meet all time measurement requirements during flight operations per visual and instrument flight regulations. This new standard was formalized by the German Standards Institute with the code DIN 8330. 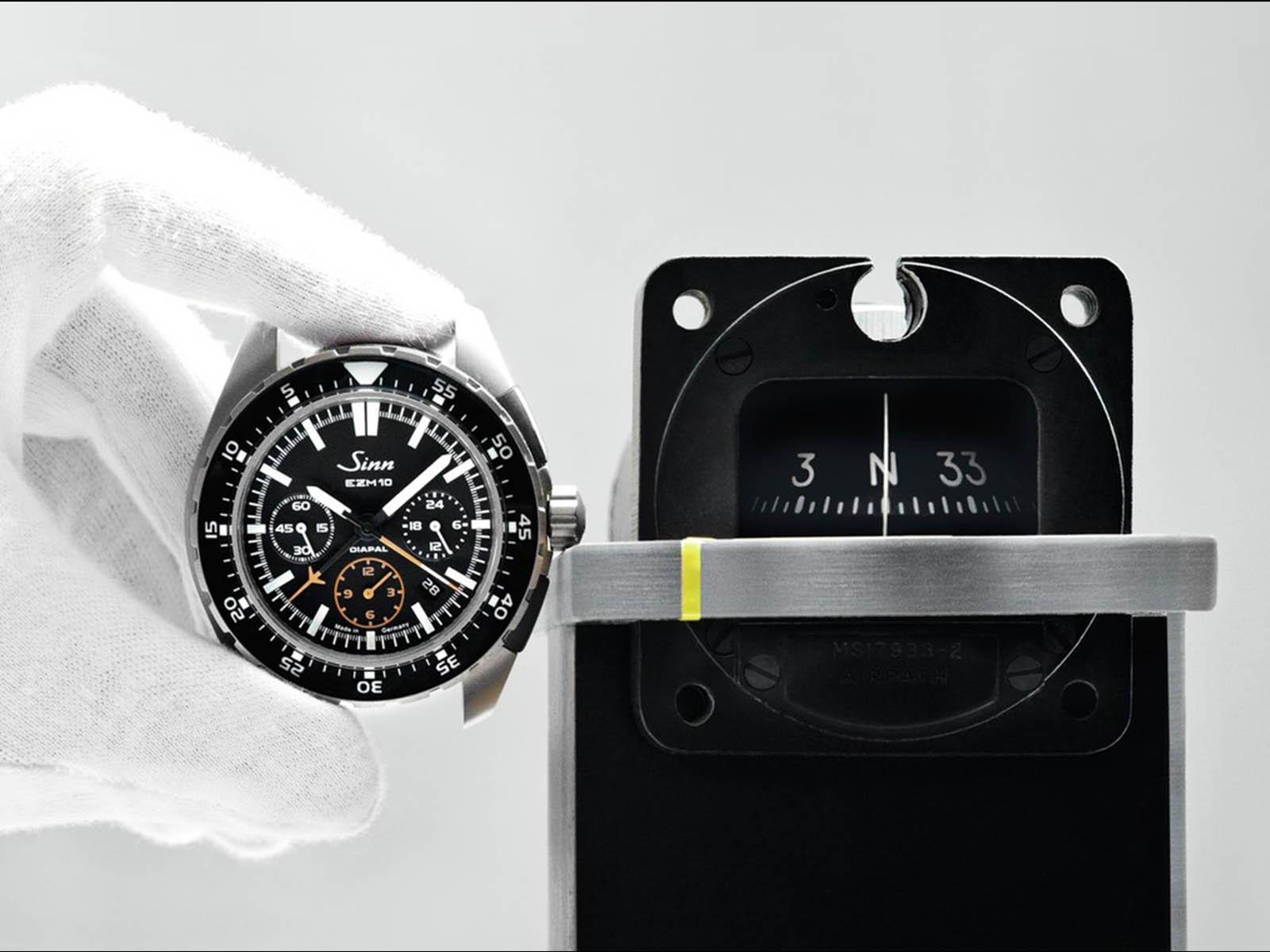 In 2014, when American Robert Alan Eustace jumped 41,419 meters from the ground, he had the 857 UTC TESTAF on his wrist. He was exposed to -77 degrees Celsius with the watch he wore on his flight suit. He broke the record of Eustace Felix Baumgartner, who broke the sound speed barrier by reaching a speed of 1,322,9 kilometers per hour. 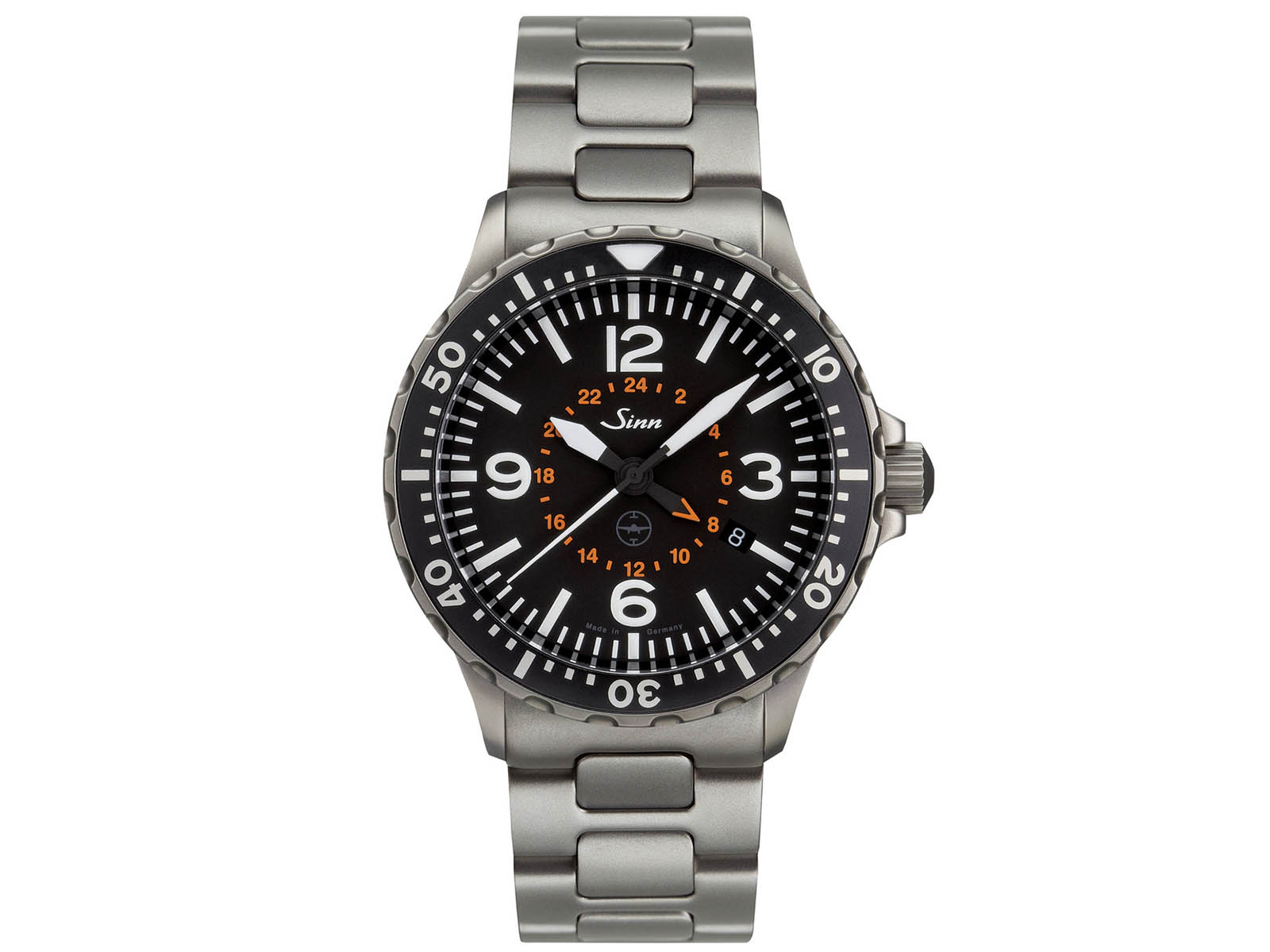 In 2018, Helmut Sinn, the founder of Sinn Spezialuhren, passed away. 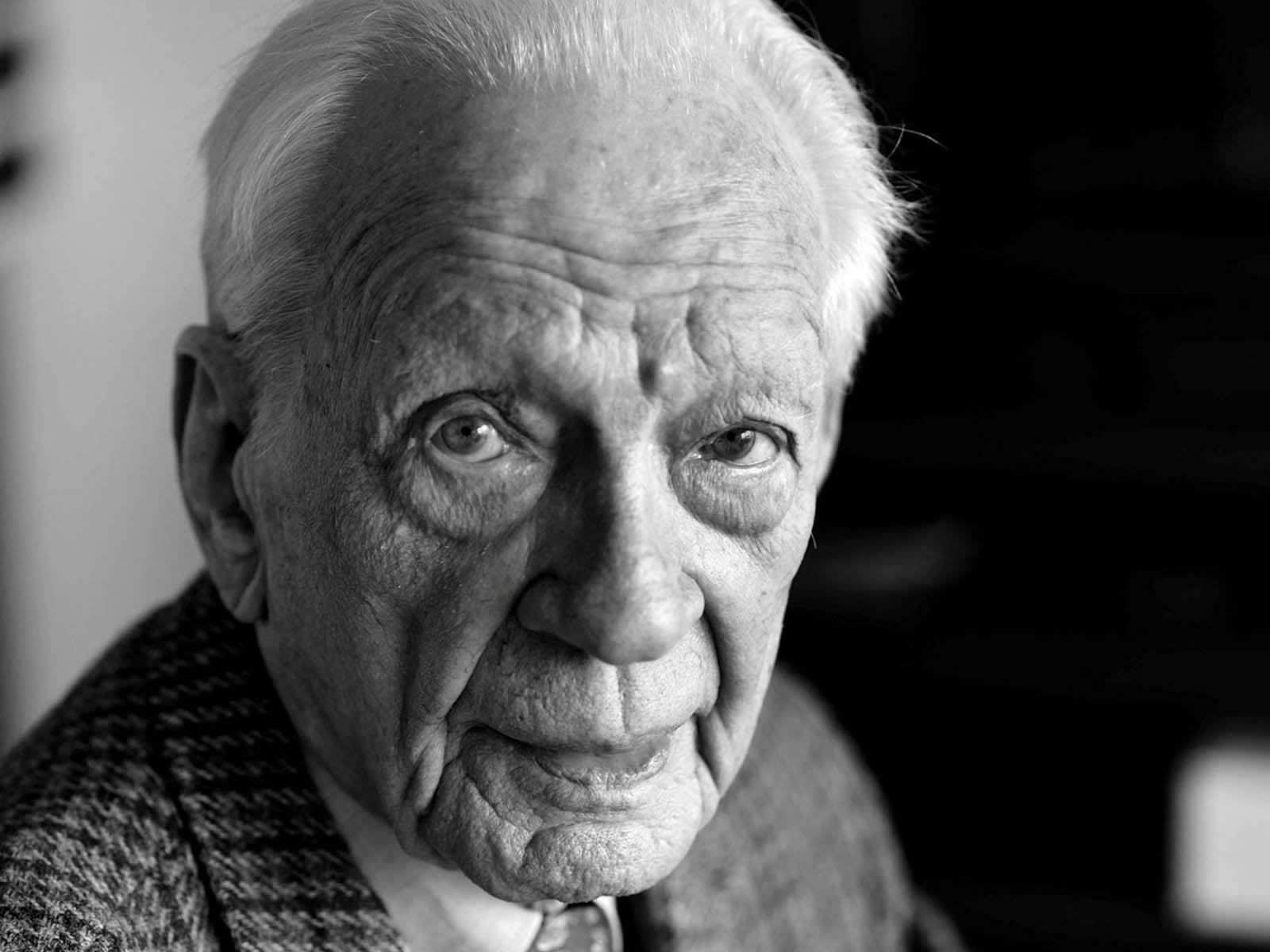 Numerous Sinn models introduced in the following years were deemed worthy of many design, watchmaking, and engineering awards, mainly IF and Red Dot.