At the Baselworld 2018 fair, which includes boutique names with a reputation for low production numbers and unique features as well as the locomotive brands of the watch industry, the Angelus U50 Diver Tourbillon is one of the new exotic models that were caught by our scanners. The new model brings the dive watch concepts under the same roof with one of the most symbolic complications of traditional watchmaking –Tourbillon. 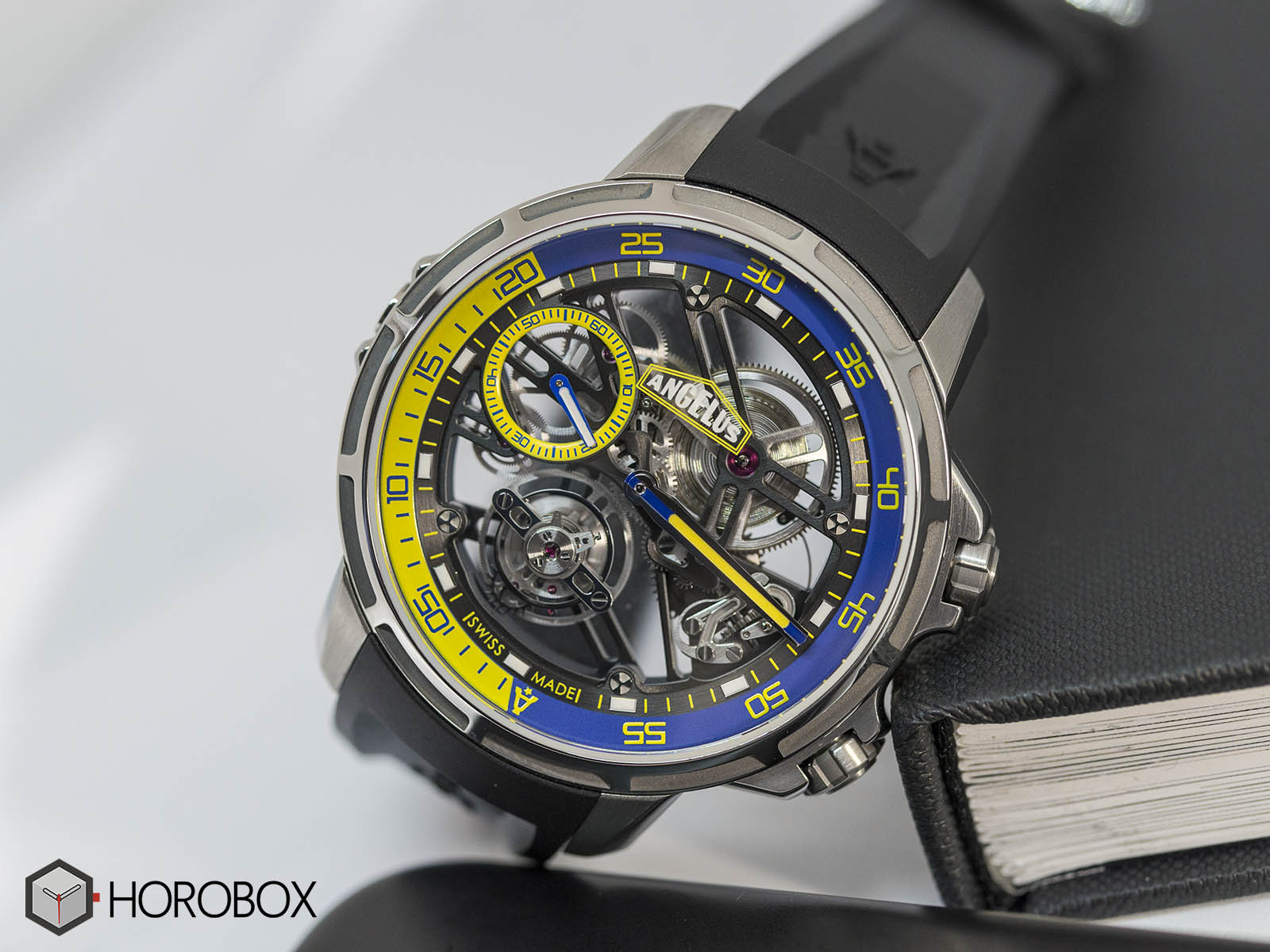 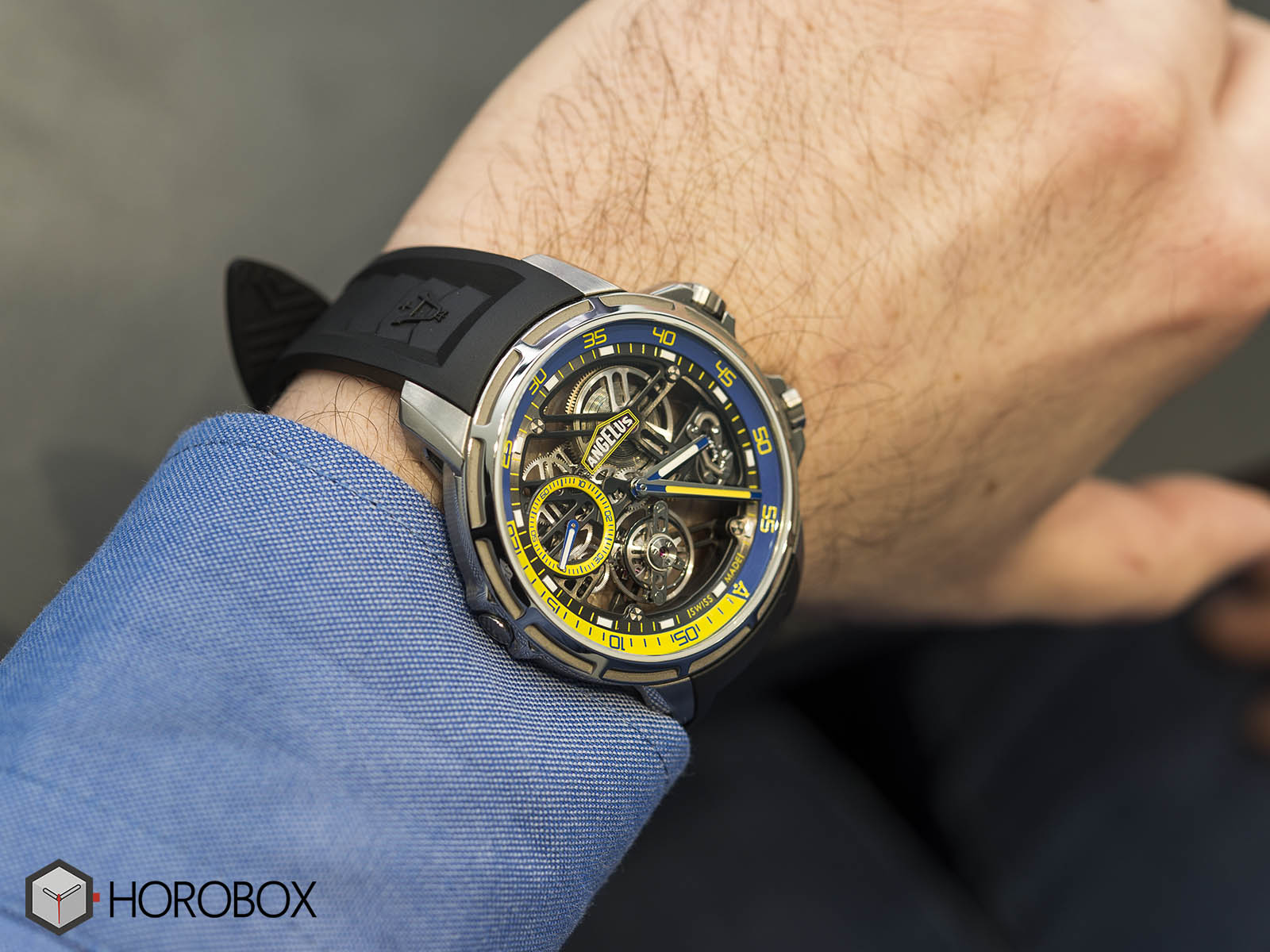 It may be the first time for Angelus that was brought back to life by Manufacture La Joux-Perret (now owned by Citizen) in 2011; the concept of “Tourbillon diver” is not completely new for the watchmaking industry. Despite being common like a chronograph or a power reserve, Tourbillon has been used in diver’s watches of the exotic brands like Richard Mille and MB&F. Here we have another example, but this time with Angelus interpretation. 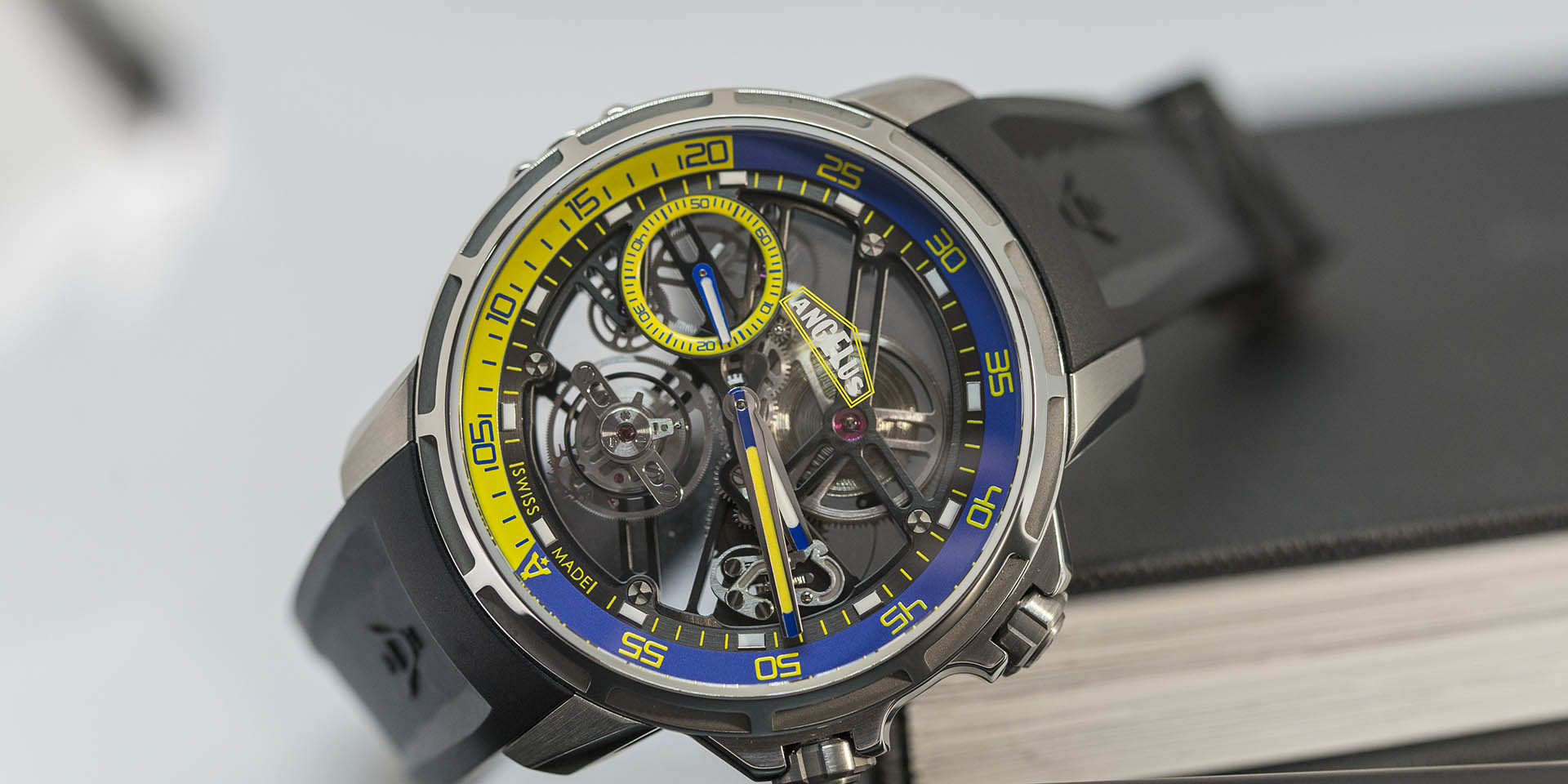 The new model is offered in a 45mm diameter case made of Grade 5 titanium. There is a pair of winding crowns in the case. The one at 4 o’clock sets the time while the one at 2 o’clock is used to adjust the inner uni-directional rotating diver’s bezel. Both winding crown are adorned with Angelus emblems and are screw-lock type surrounded by thick crown guards. The case is equipped with a Helium Release Valve at the left side for helium saturated dives. The case sports anti-glare treated scratch resistant sapphire crystals on both sides and it provides a sportier and solid image with its thick lugs, notched bezel and 300 meters water resistance rating. 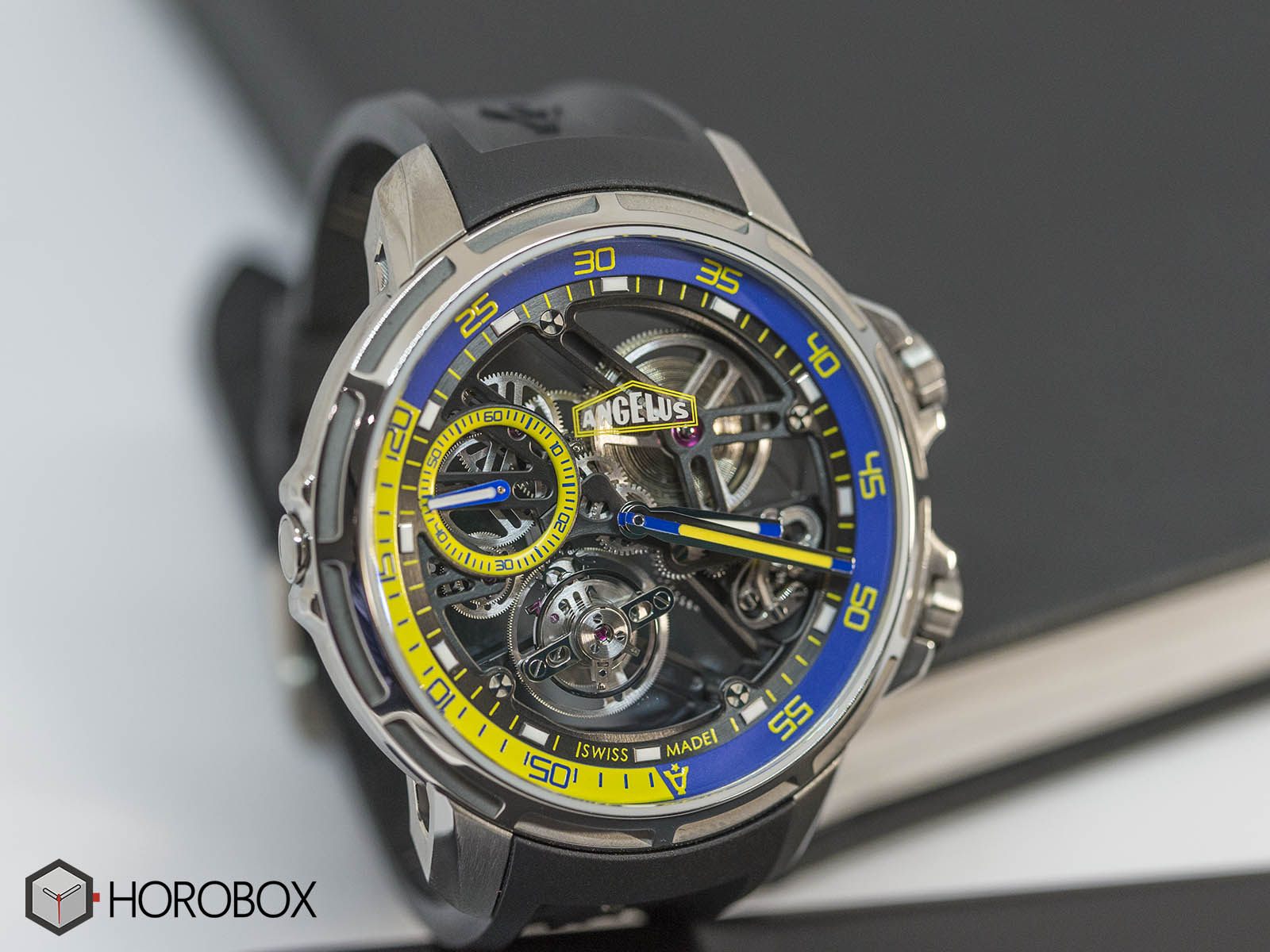 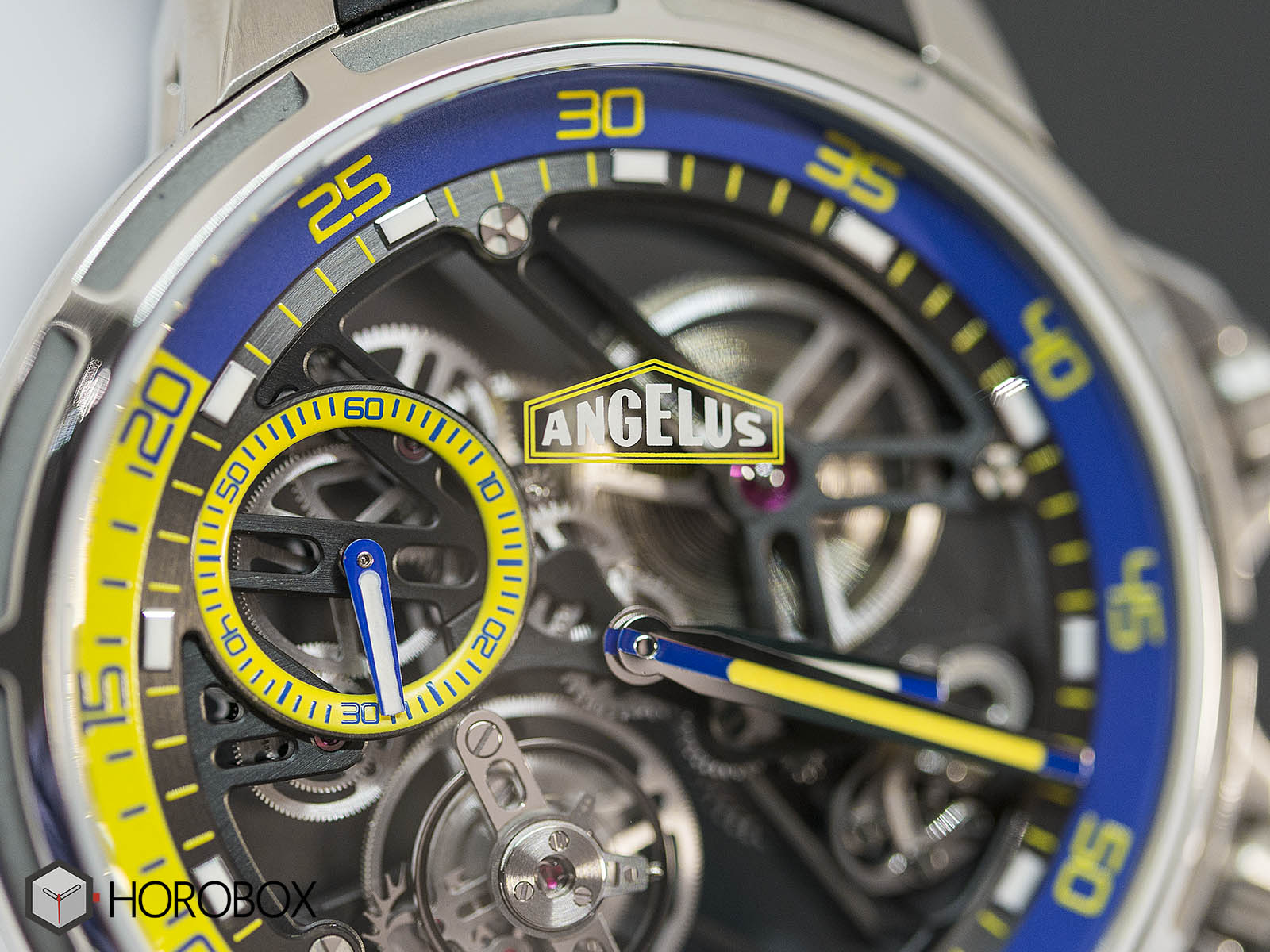 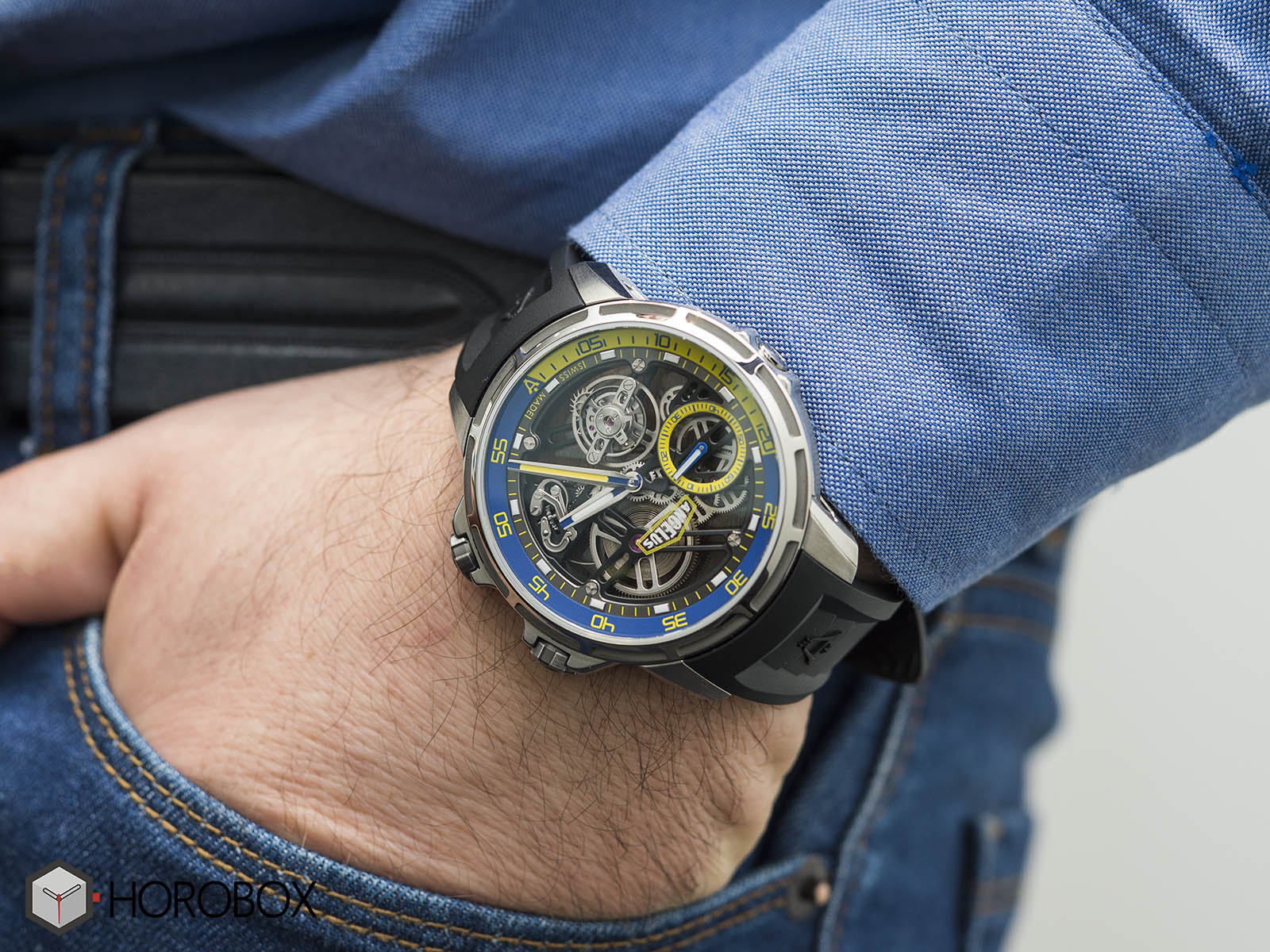 The dial of the new model is designed in skeletonized style which does not seem to be the best choice for a diver’s watch. Though it seems the priority has been given to the visibility of the art piece like movement, Angelus managed to provide enough legibility to read the necessary information by adding a scale around the dial with hour and minute markers and a set of different color hands. All indices and hands are applied with SuperLumiNOVA phosphor material in order to have decent legibility at darker environments. The inner rotating bezel, with contrasting yellow and blue colors, plays a significant role in terms of boosting the level of legibility.

One of the most important parts of the model is undoubtedly its movement. The model is powered by the brand’s in-house movement Caliber A-300 which is a result of a 4 year R&D work at Angelus. In order to suit with the model’s skeleton style, Angelus decided to design a brand new skeletonized movement from the scratch instead of simply cutting out a present one. Thanks to the perforated components the movement is quite lightweight and only 4.3mn thick. Caliber A-300 beats at a frequency of 4Hz (28.800vph) and offers up to 55 hours of power reserve time when fully wound. 23 jewels self-winding movement is equipped with a 60 seconds Tourbillon besides central hours, minutes and small seconds. The movement nicely matches with the industrial image of the model both in terms of material and decoration. The main plate and upper bridges are snailed with chamfered edges and black ADLC coated while the Tourbillon cage is mirror-polished with chamfered and polished edges. 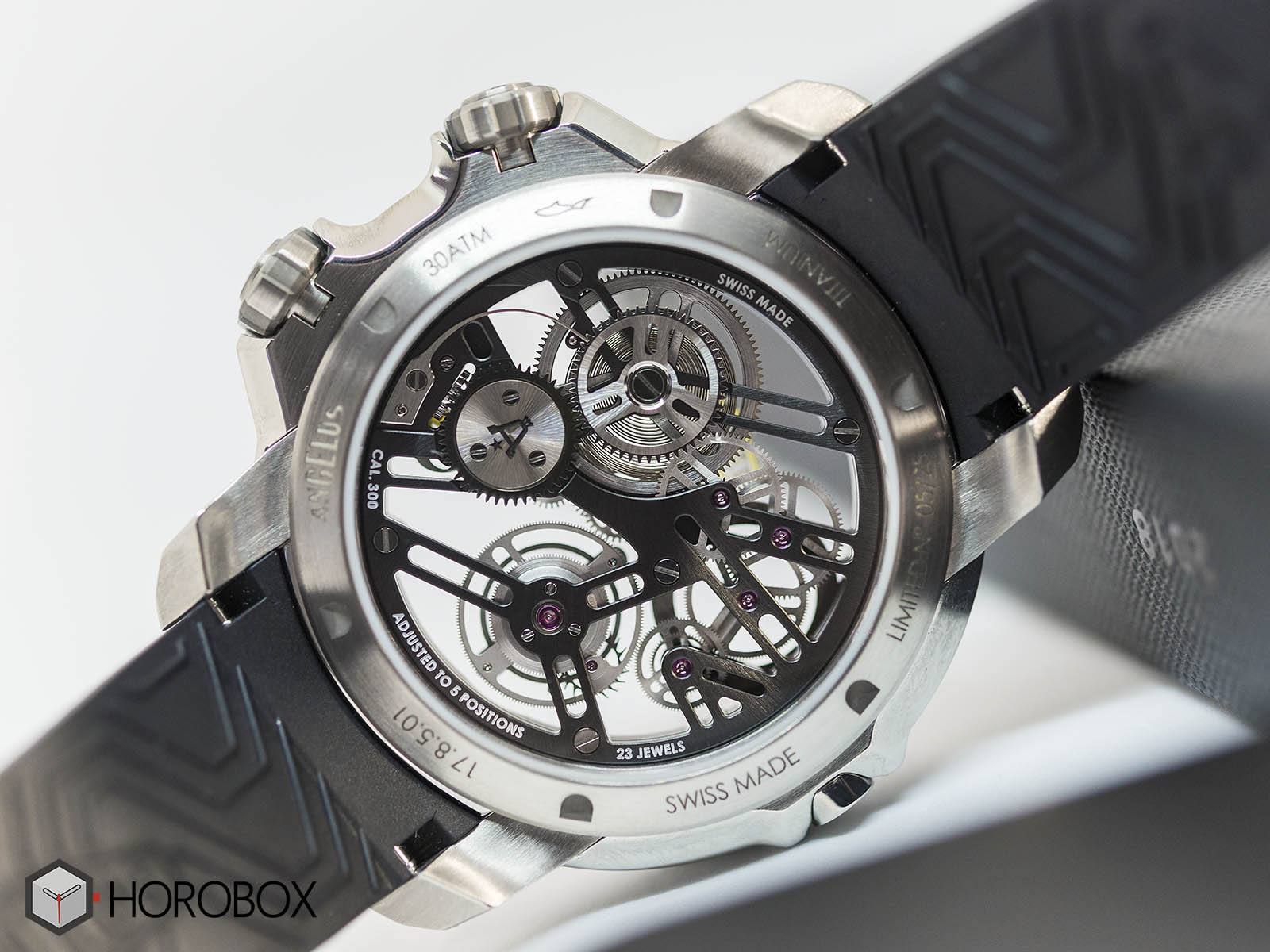 The Angelus U50 Diver Tourbillon comes on a black rubber strap featuring the brand logo and 3D figures on the inside and outside. The strap is secured by an Angelus signed pin buckle made of Grade 5 titanium like the case. The MSRP is 29,700 CHF. 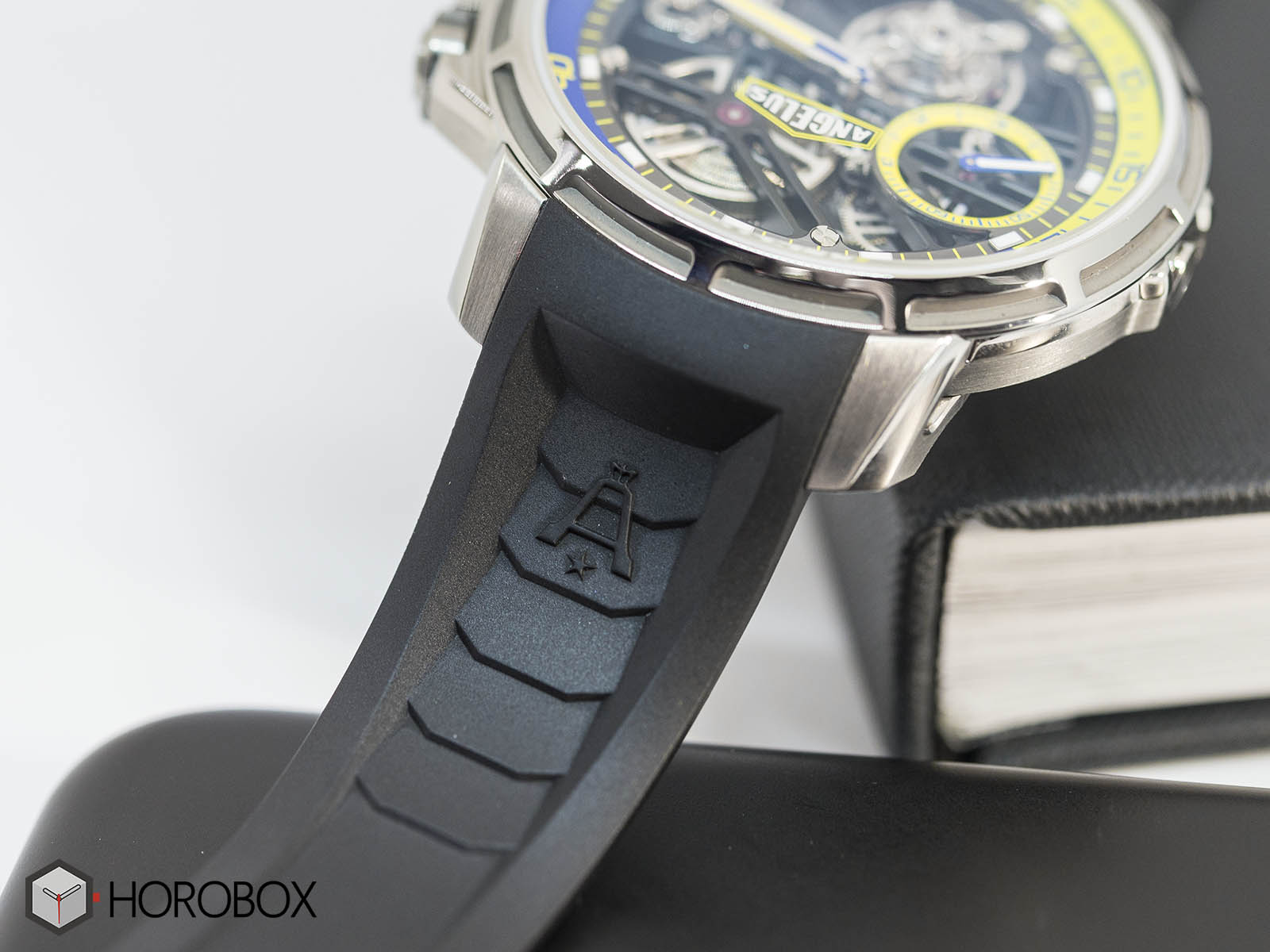 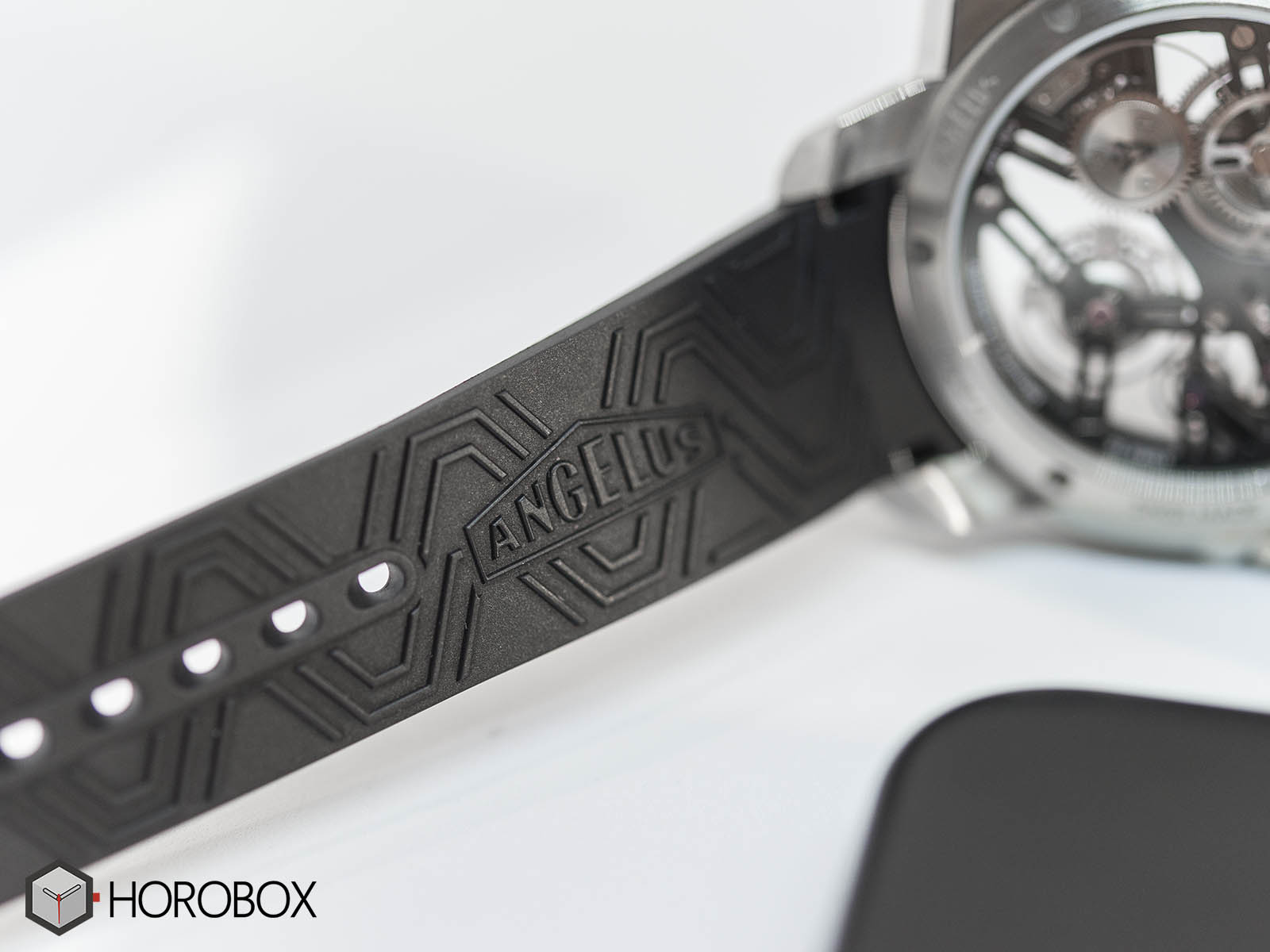