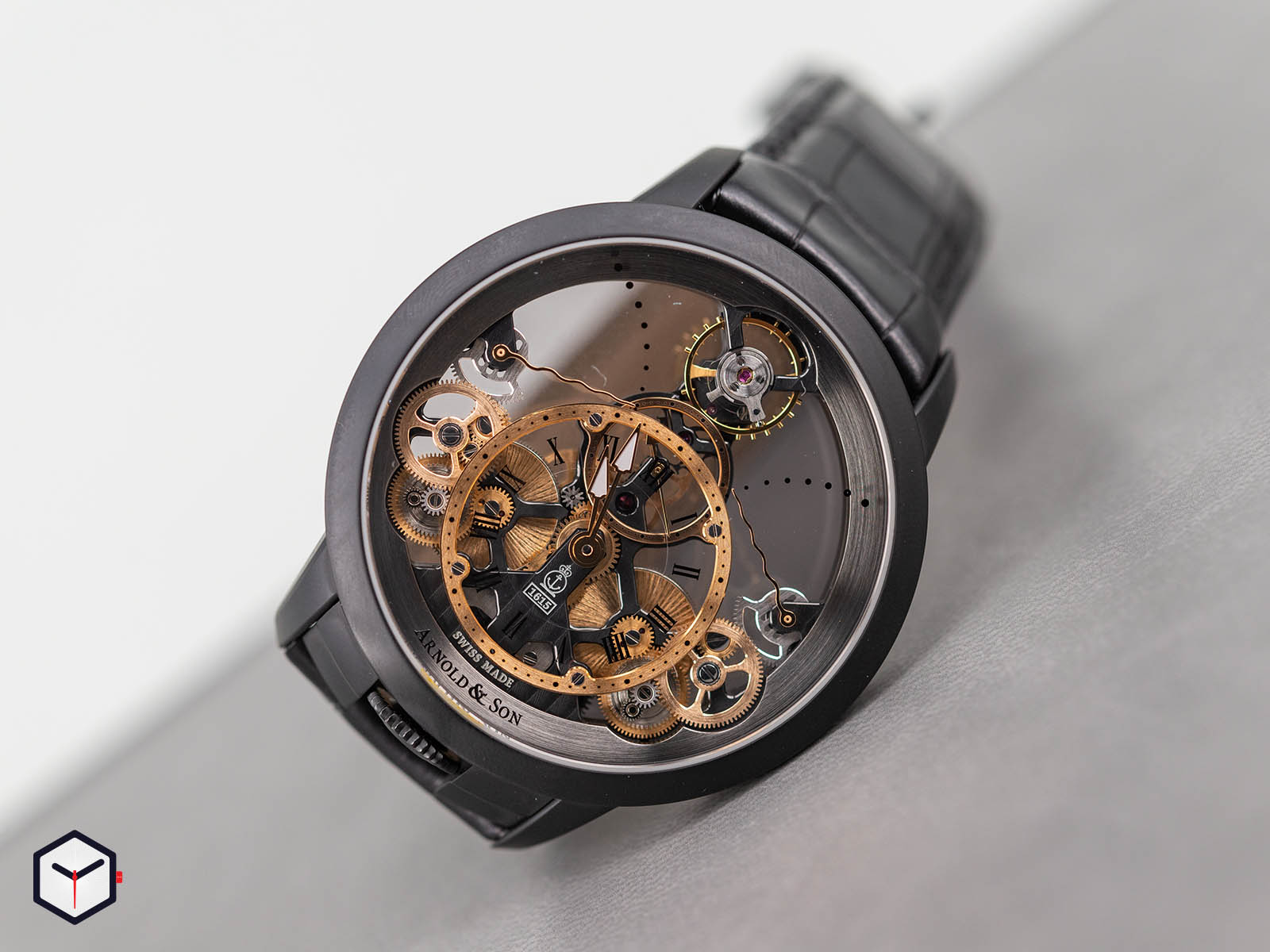 I would like to begin with a short note on Arnold & Son’s history. John Arnold, the founder of the brand, was born in 1736 and is an English master watchmaker. His career, which began at the age of 19, is full of many achievements, from the Half-Quarter Repeater exclusively designed for King George III to the No.3 Chronometer that has been used by Captain Cook during his Pacific voyage. The brand, which moved on with the second generation by Arnold’s son taking over the business in 1799, offered numerous Observatory Stopwatches and many other patented mechanism technologies as well as being awarded by Napoleon. Arnold & Son kept operating until 1857 with some financial support and partnerships and went into a deep sleep afterward until 1995. 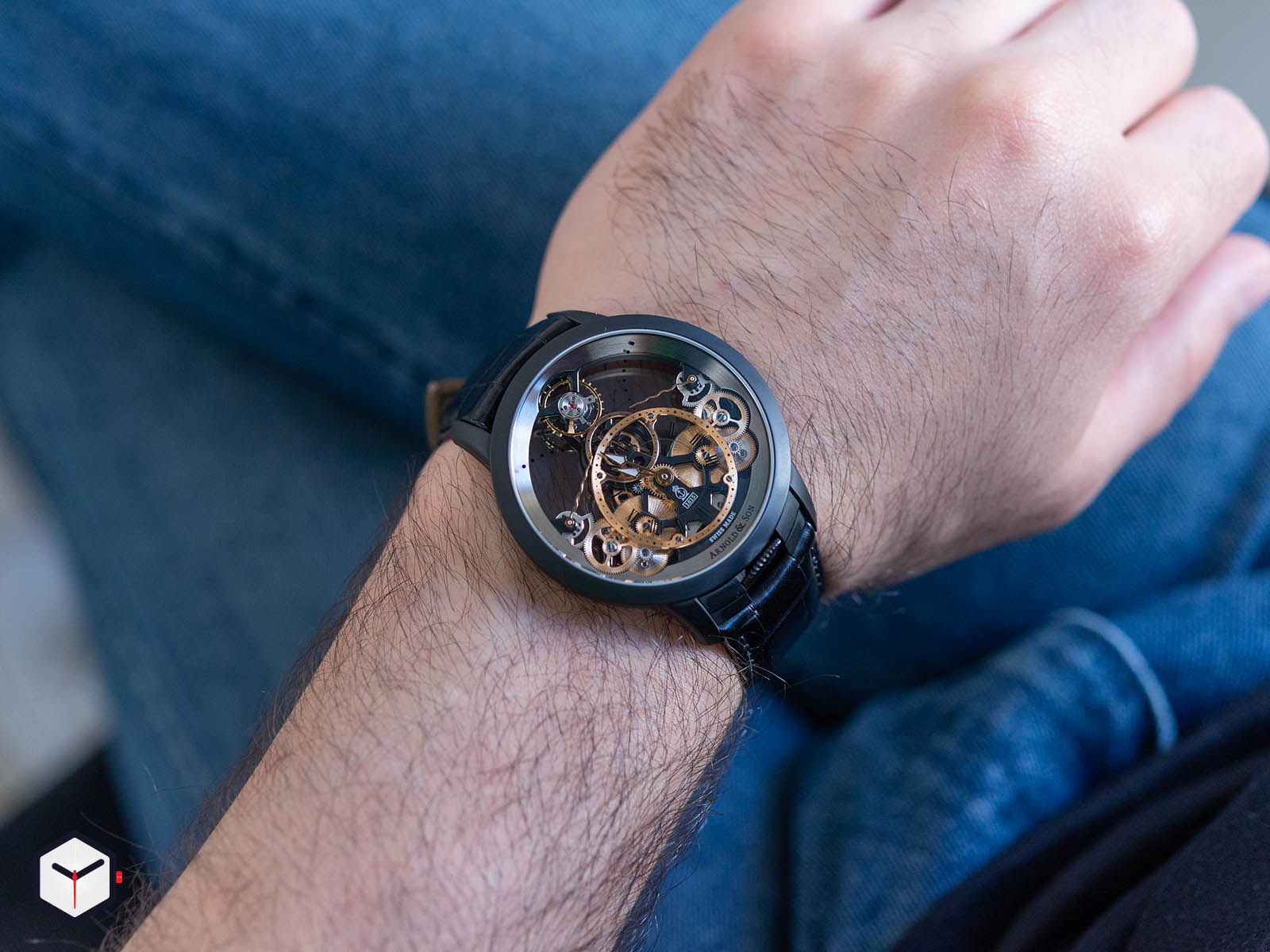 The new Arnold & Son began to produce with the awareness of the brand’s name and well-established history. Time Pyramid, which is the guest of our Hands-On corner, is one of the rare models produced in this direction. 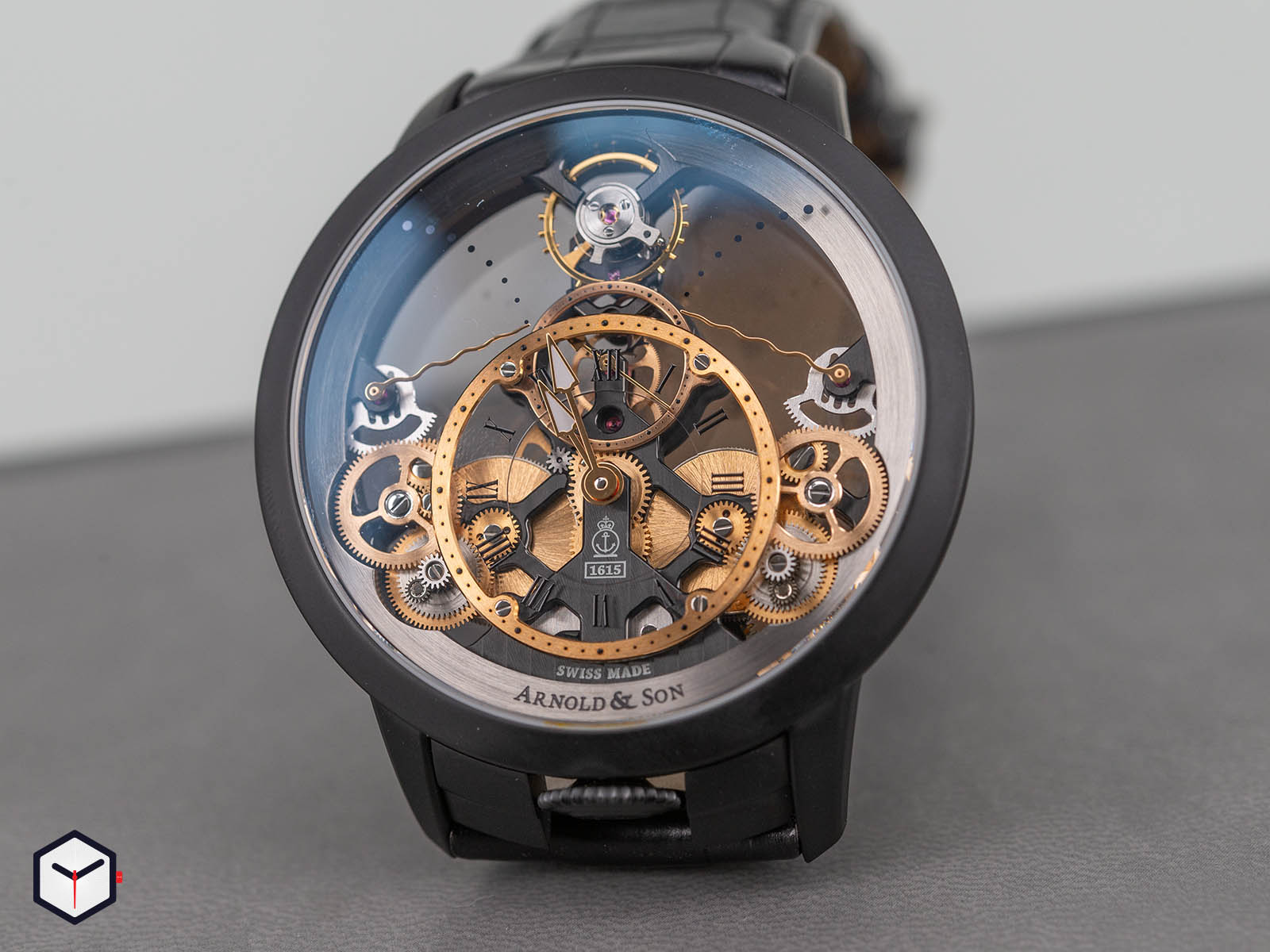 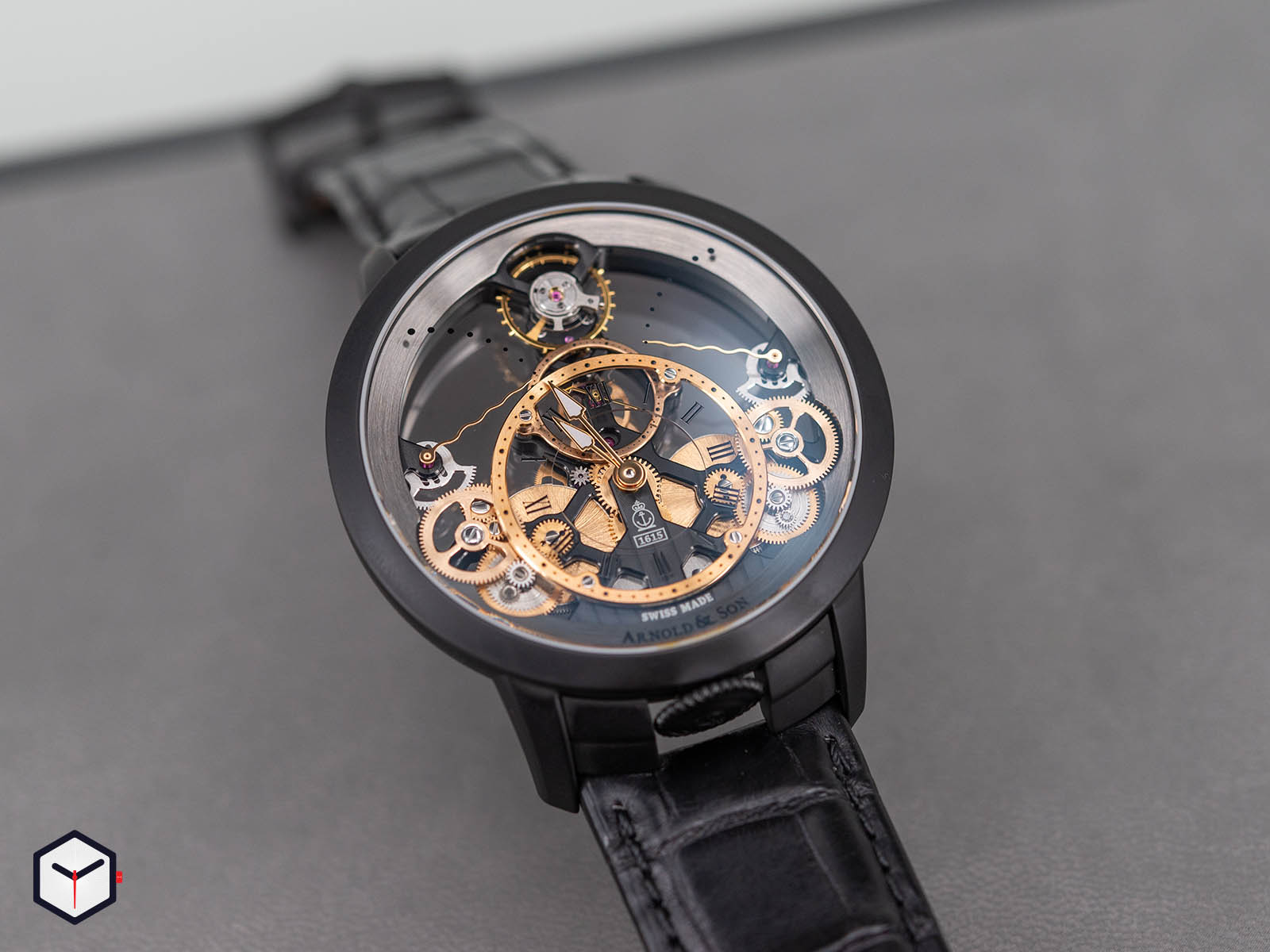 The model comes on a matt black DLC coated stainless-steel case measuring 44.6mm in diameter. The case is equipped with anti-glare treated scratch-resistant sapphire crystals on both sides (domed at the front side) and is waterproof up to 30 meters / 3 bars. The winding crown is located at 6 o’clock. Therefore, the lower lug is specifically designed for this feature. Matt DLC coating reinforces the resistance of the case against scratches and the boosts the sporty character of the timepiece. 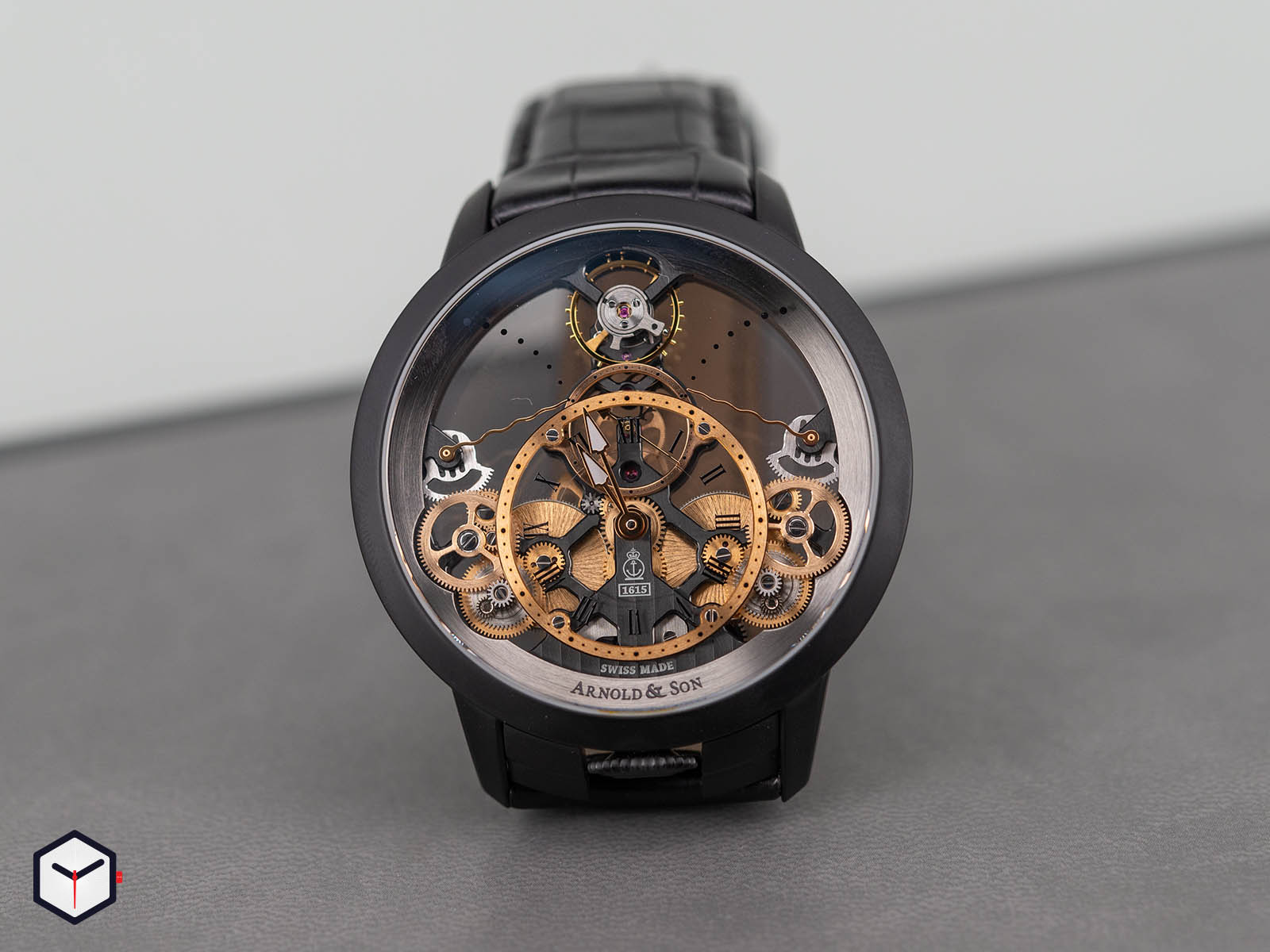 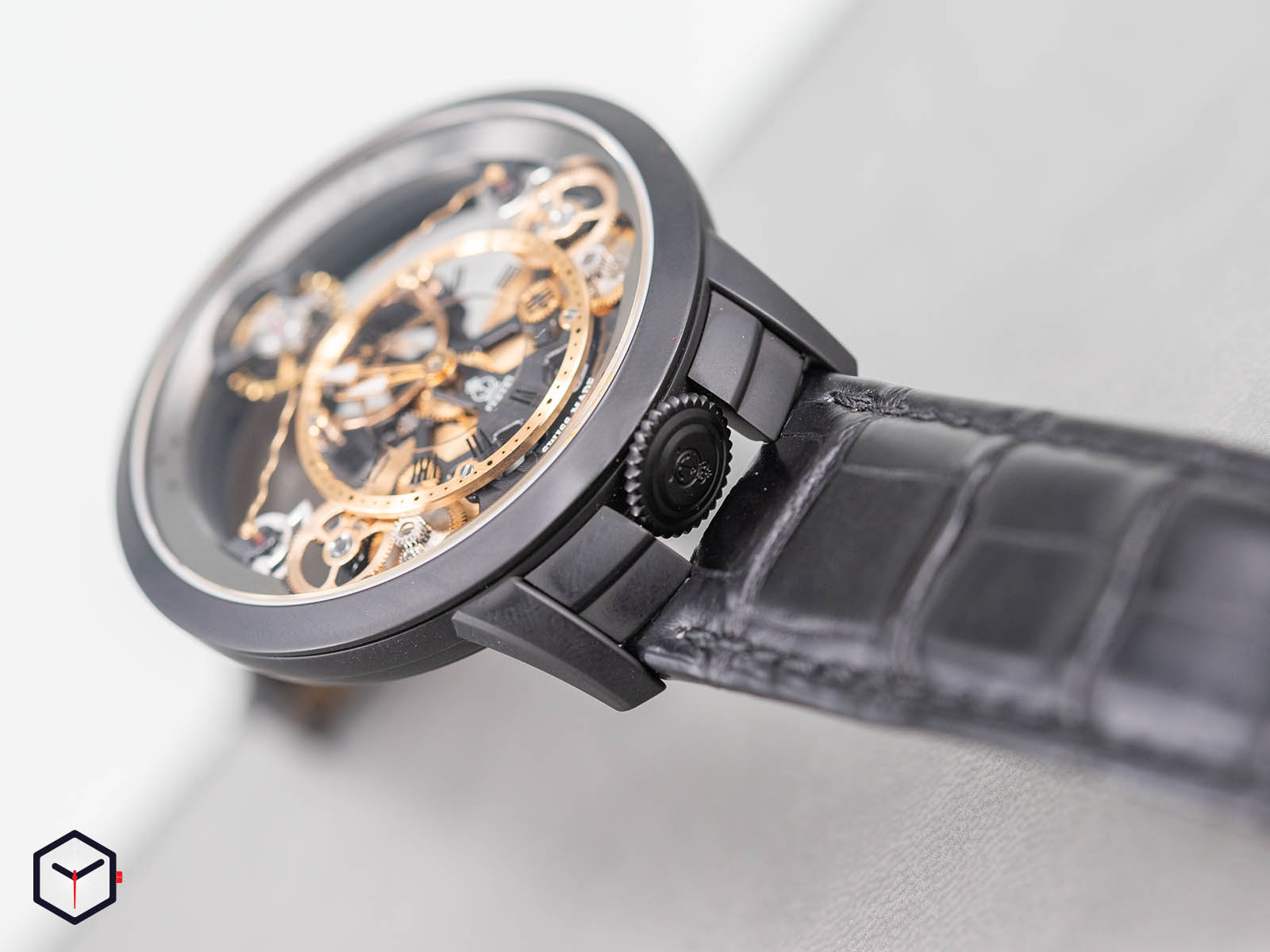 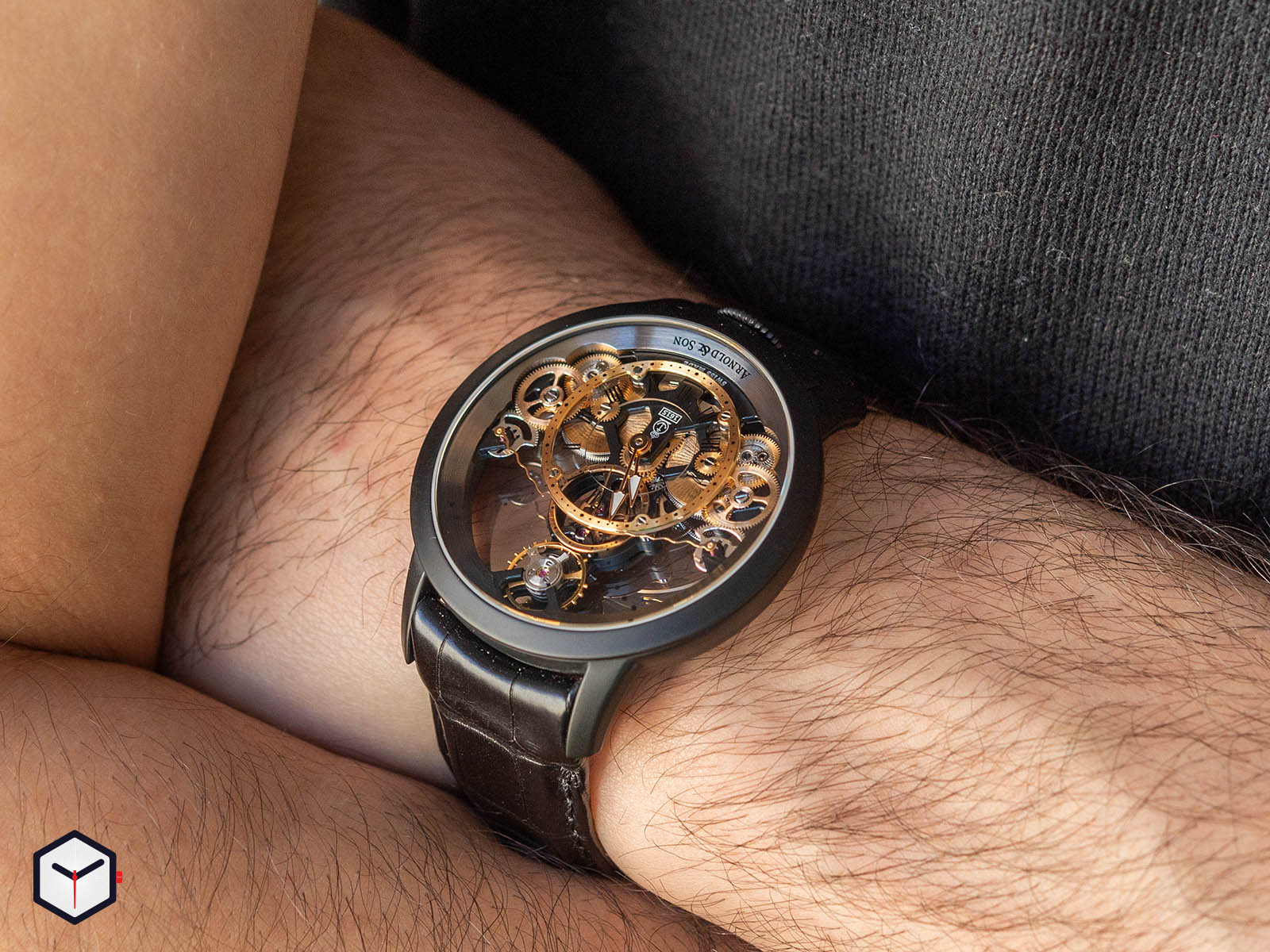 The model is powered by one of the most special examples of a skeleton design movement. Exclusively designed for this model, 27 jewels hand-wound Caliber Ref. A&S 1615 measures 37.6mm x 4.4mm, beats at a frequency of 21.6000vph and offers a power reserve of 90 hours when fully wound thanks to its double-barrel winding system. It is worth noting that this feature is added to reinforce the symmetric quadrant structure rather than functionality. Due to the movement’s architecture, the second one is wound by the first one. In other words, the power reserve required to keep the movement beating is gradually carried by two hairsprings. In this way, the accuracy of time-keeping is at the highest level. This is where the pyramid inspired structure manifests itself. The movement, which is offered in a pyramid-like lay out with its gear train mostly located under the hairspring, which gives the watch its name as well, expresses the top level where Arnold & Son positions itself. Inspired by the single-hand watches created by John Arnold in the 19th century, the model offers flawless workmanship and astonishing details. 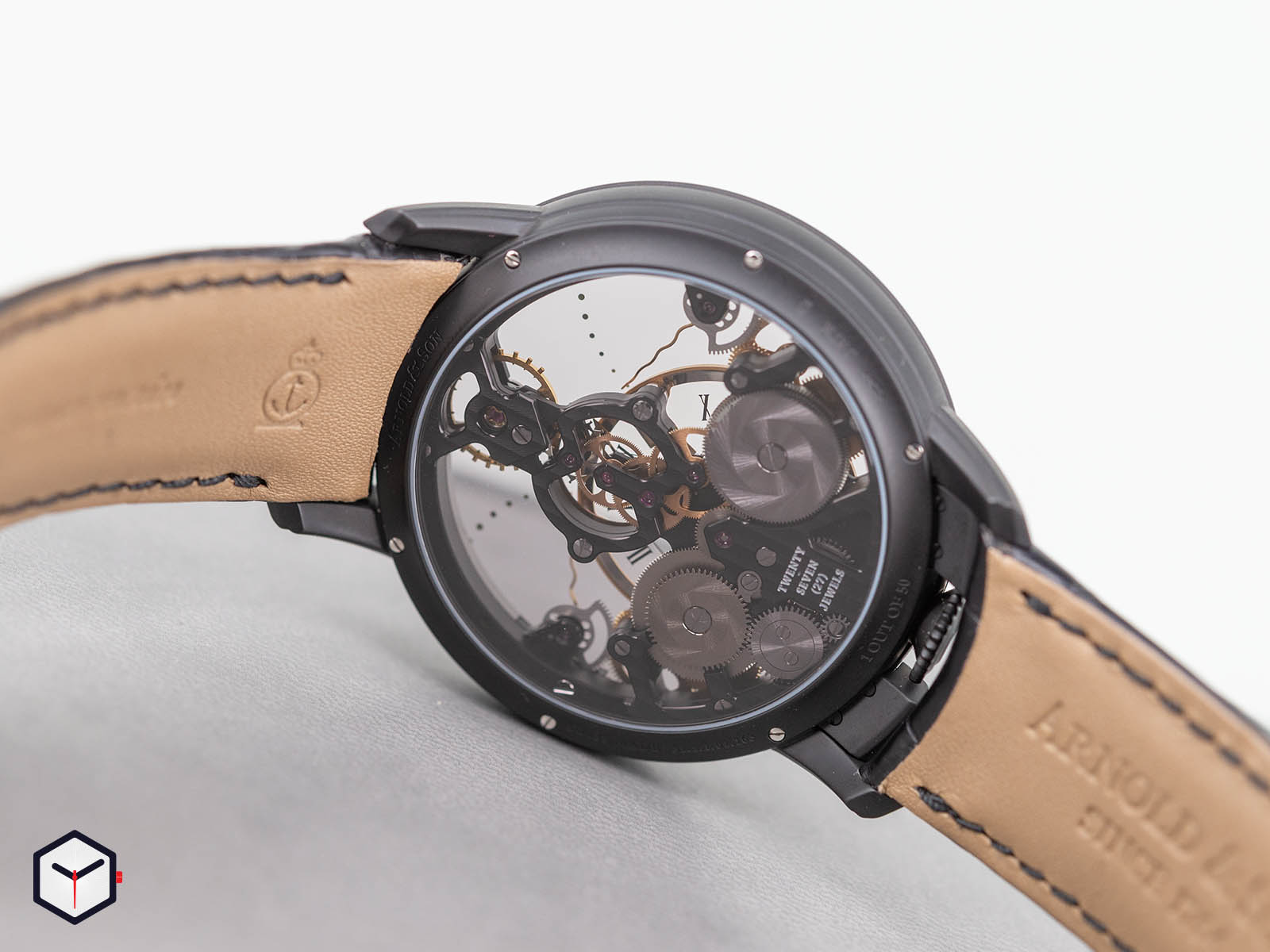 The Arnold & Son Time Pyramid is available in a matt black alligator strap that is secured by a DLC finish stainless steel standard buckle. The model is limited to a span of 50 units only. 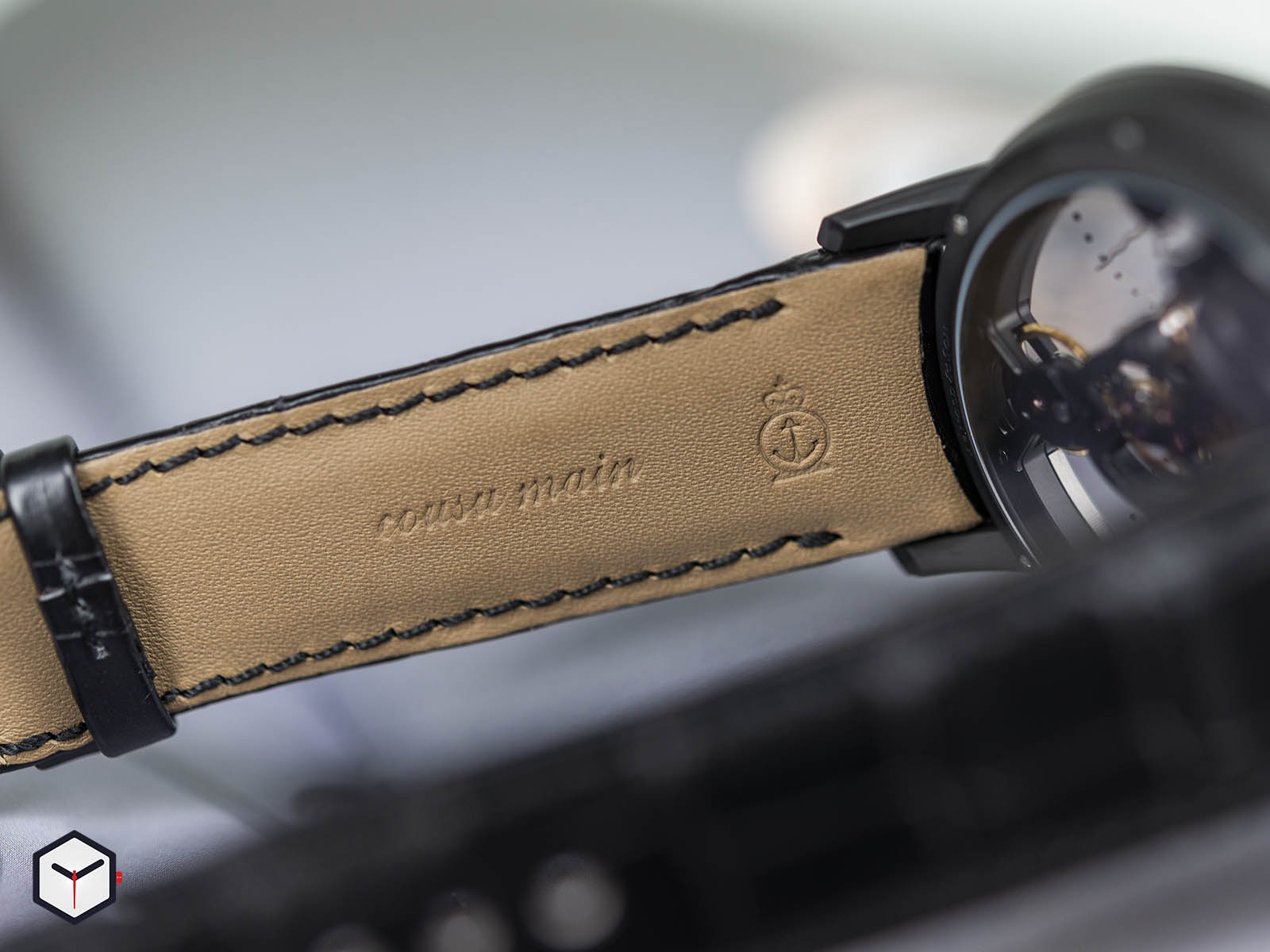 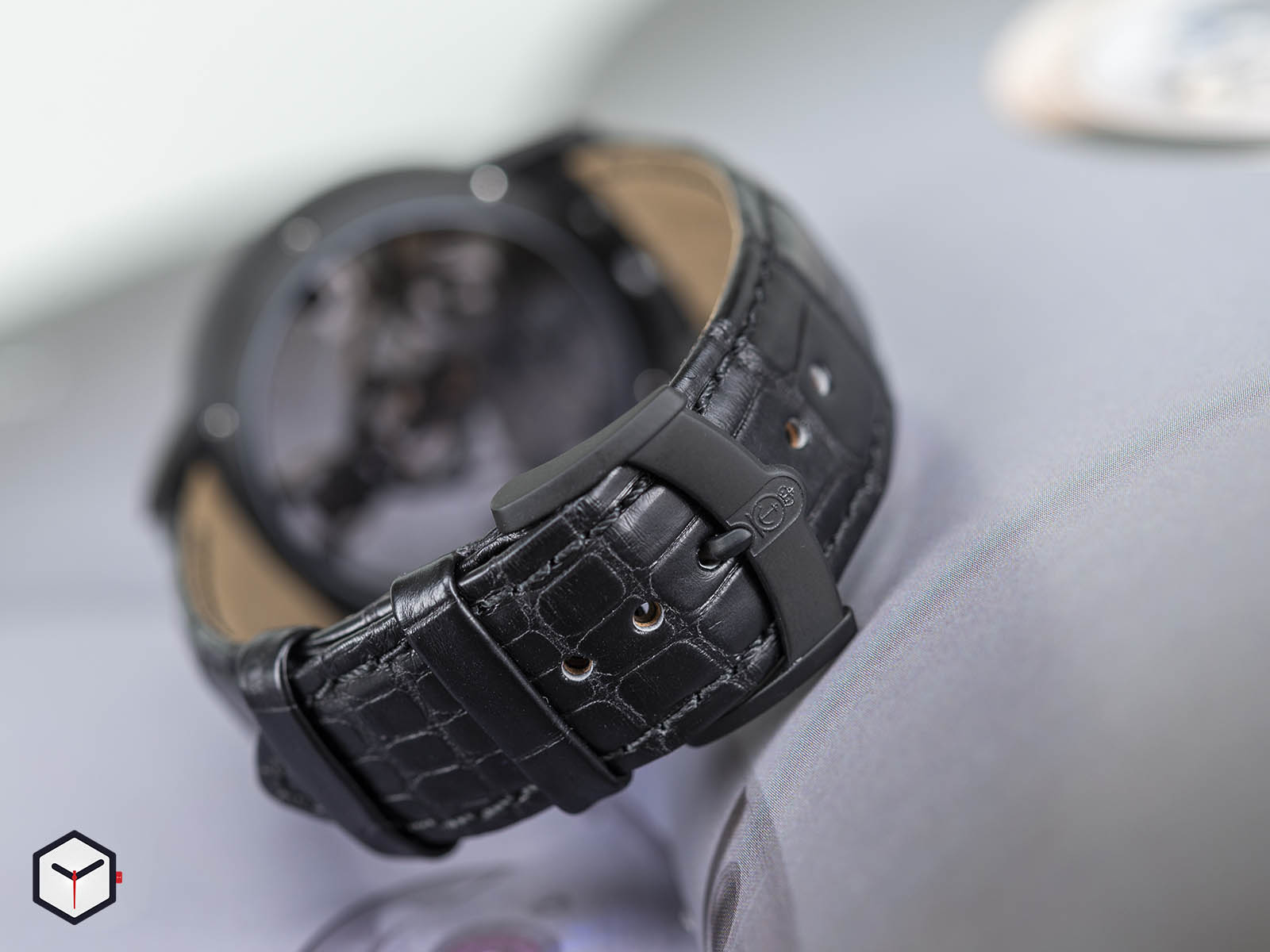