With its unique look and the famous Bomb Timer style chronograph pusher, Graham has taken an important place among the original names of the watch industry. The independent brand announced newly added versions of the motor sports-inspired Chronofighter Superlight Carbon model family. The collection is made up of three new models in different color themes accompanied by rubber straps that attract attention with their vibrant color tones. 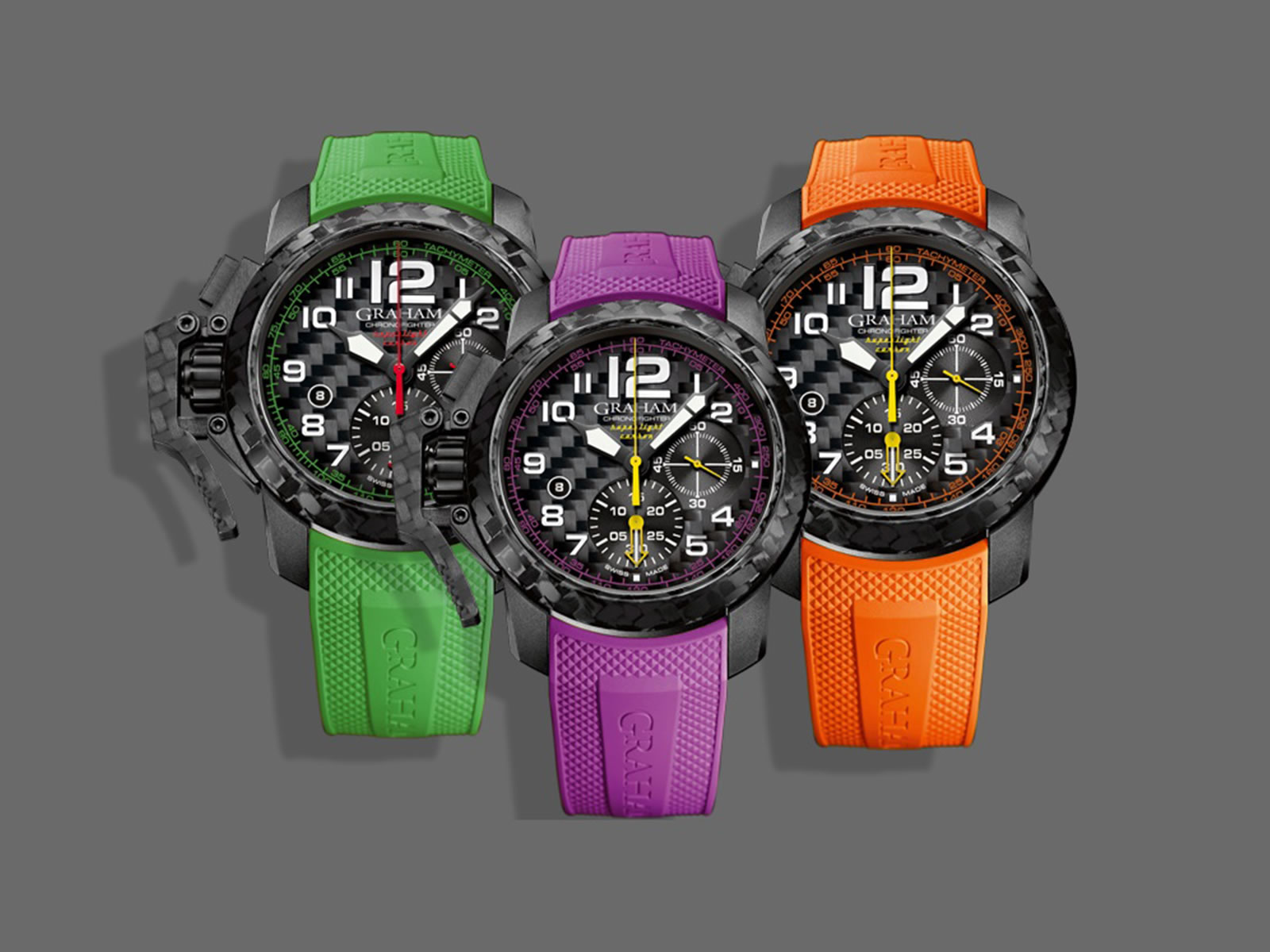 Graham, which has been greatly appreciated by our team with its Nose Art Collection from last year’s Baselworld, made a colorful entry to the new season with three new models added to its highly acclaimed Chronofighter Superlight Carbon model family. 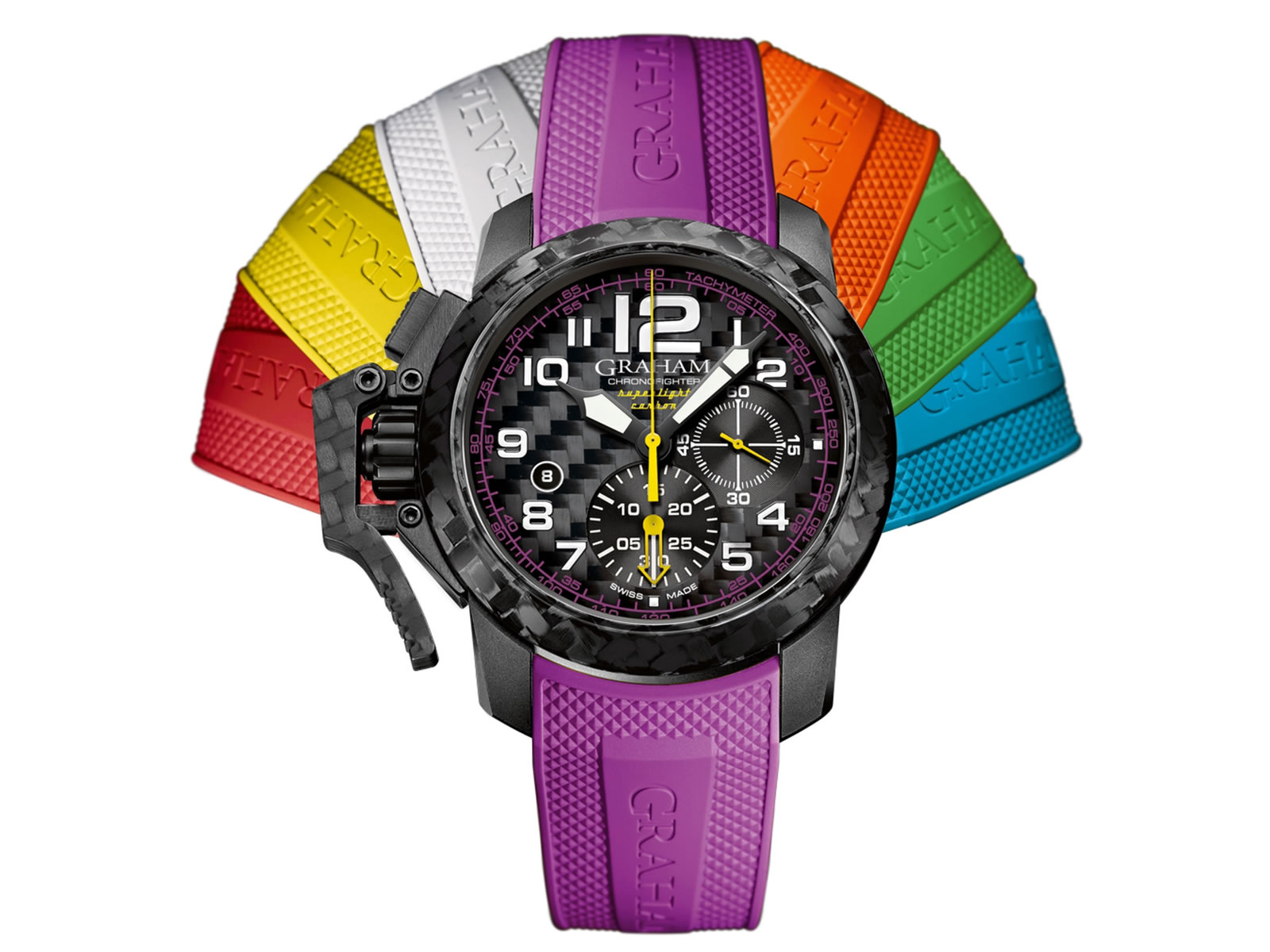 Based in La Chaux-de-Fonds, Switzerland, Graham has a very young history when compared to the Swiss Watchmaking Industry standards. But the brand became popular in a quite short time thanks to its experienced management and unique appeal. Graham, which became instantly recognizable with the Bomb Time style chronograph pusher, has strong ties with the world of motor-sports. 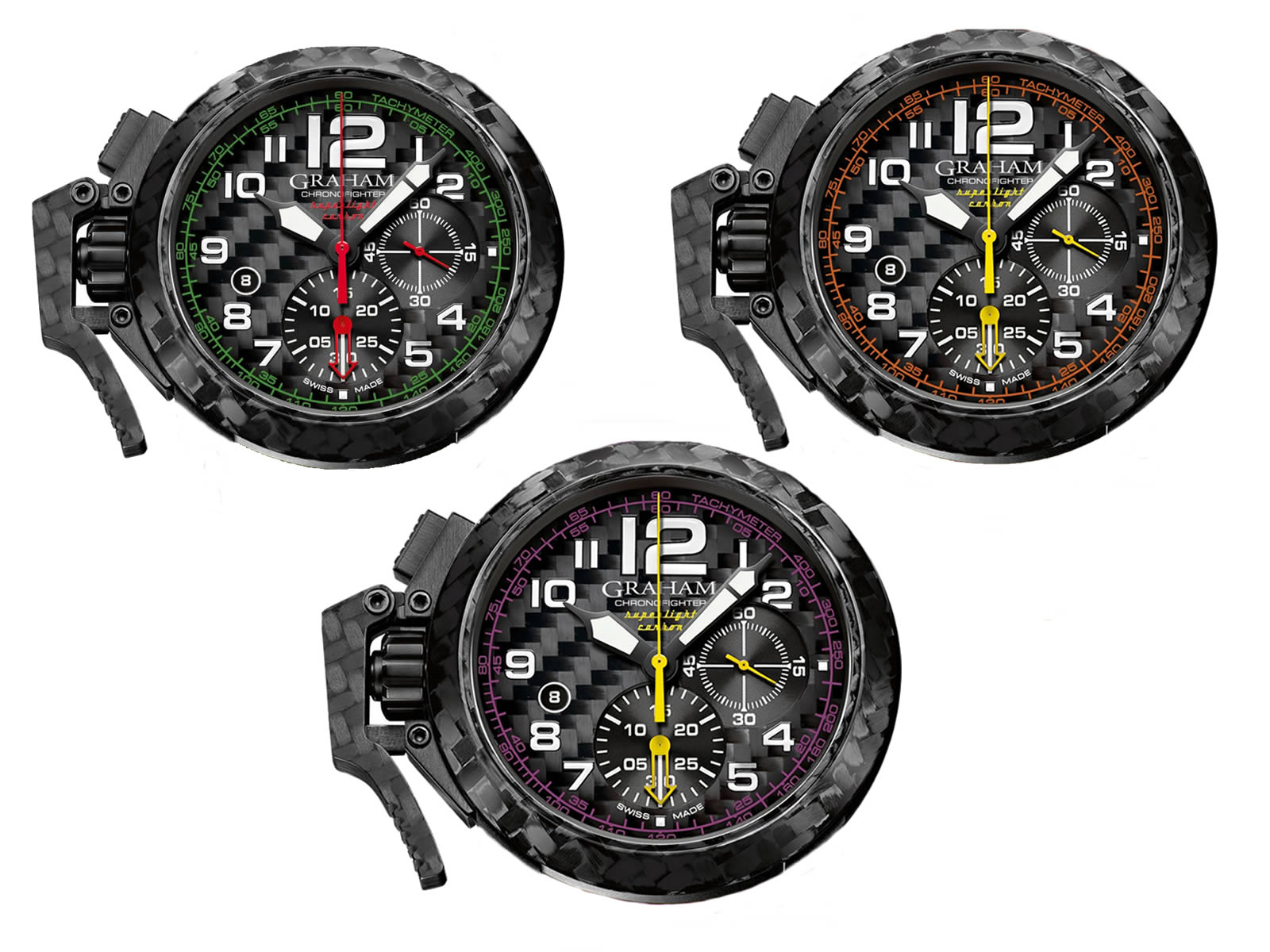 The independent brand sponsored the Brawn GP Formula One team from 2009 to 2011, preceding the partnerships with the Swiss Porsche Cup, the Isle of Man Tourist Trophy, the Baja 1000, the GT Asia Series, the Spengler Cup, Silverstone circuit, the Swiss Gurnigel Hill Race and the Club Porsche Romand. 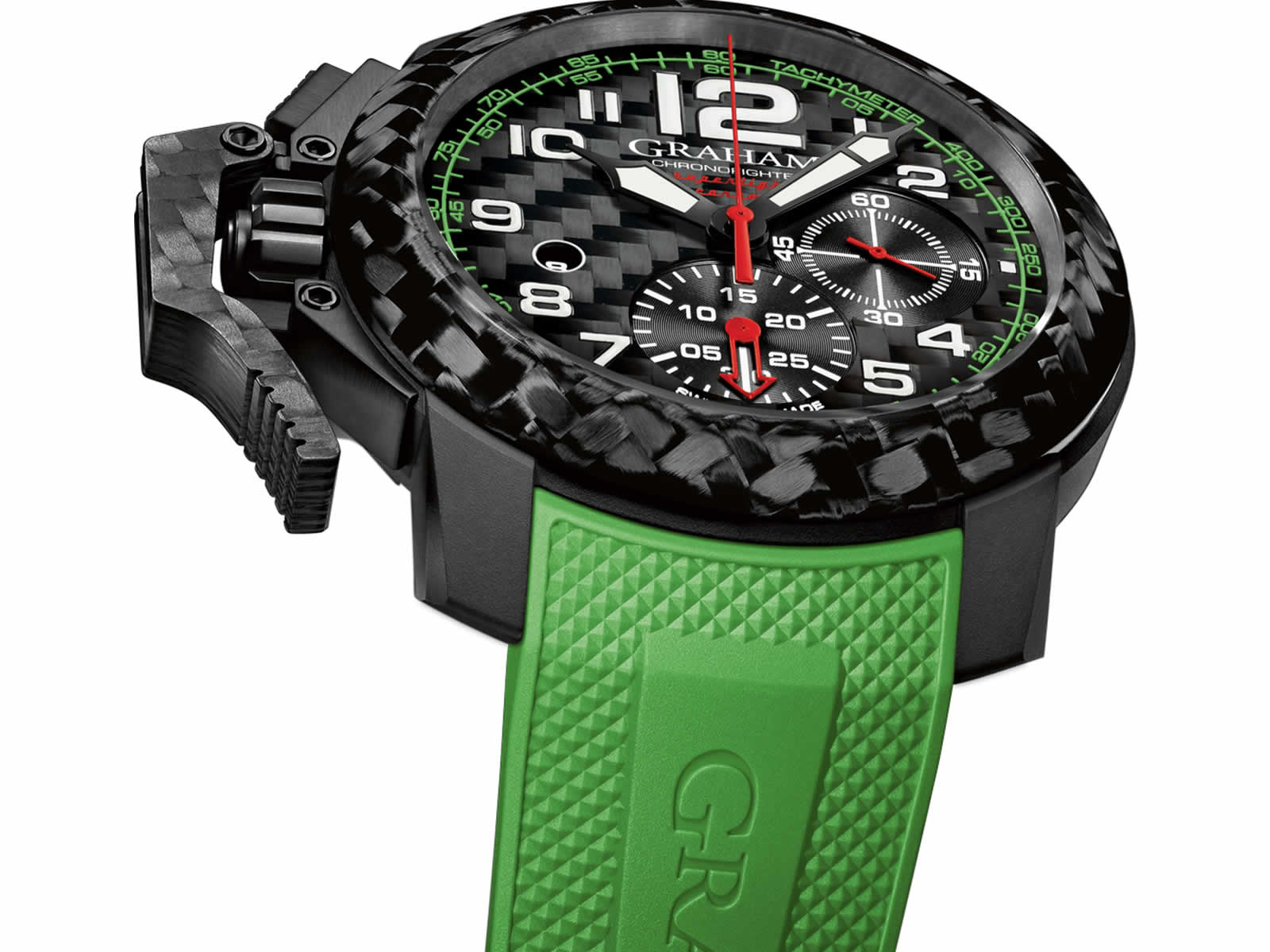 The new models are based on the Graham Chronofighter Superlight Carbon which we all know with the standard version. Despite the massive 47mm diameter case and the iconic chronograph pusher which is called “espresso machine lever” among the watch enthusiasts, the case unexpectedly comfortable. The reason for that is the ultra-light 3K Carbon composite material used to manufacture the case, the bezel and the famous chronograph pusher. 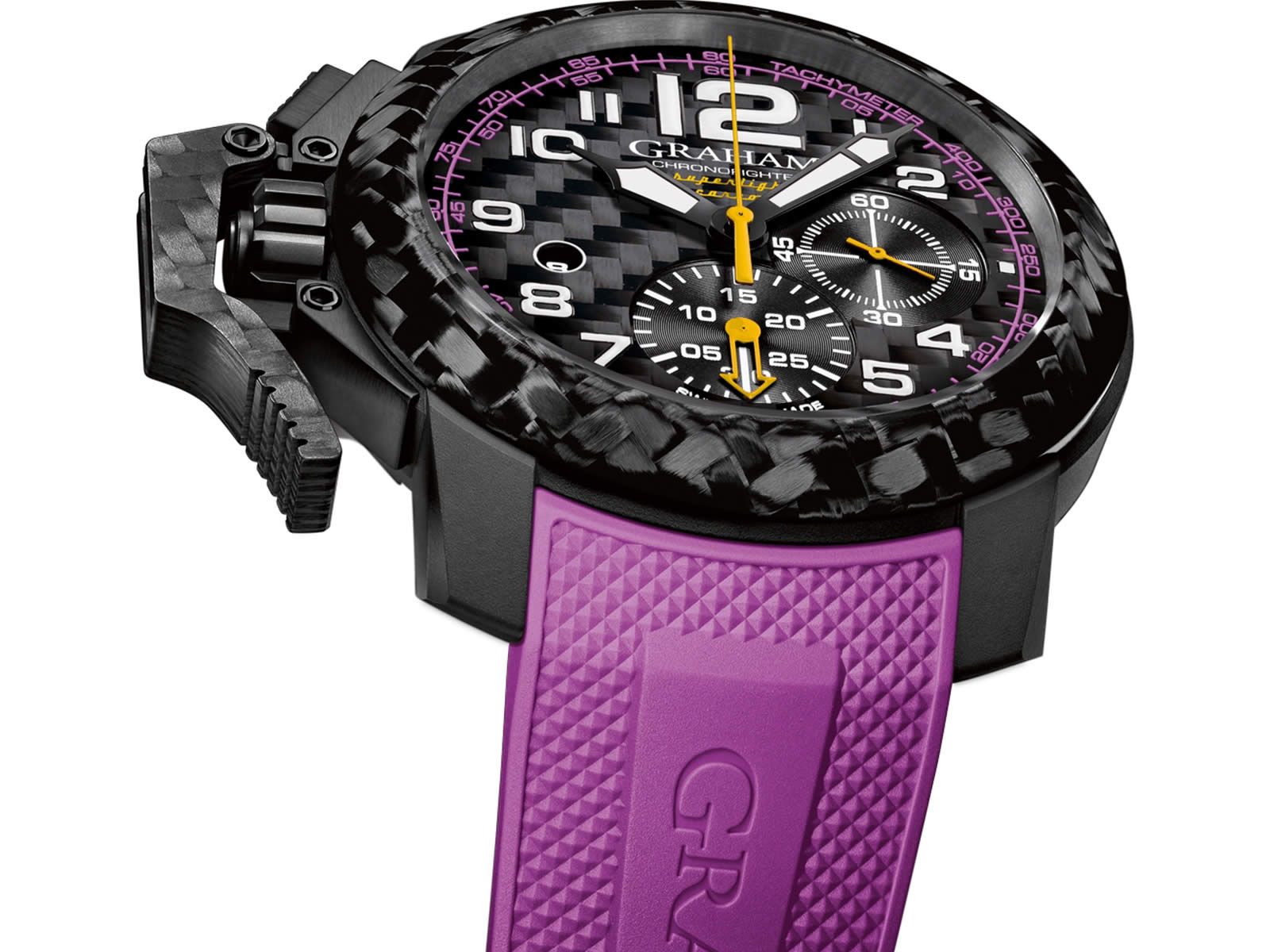 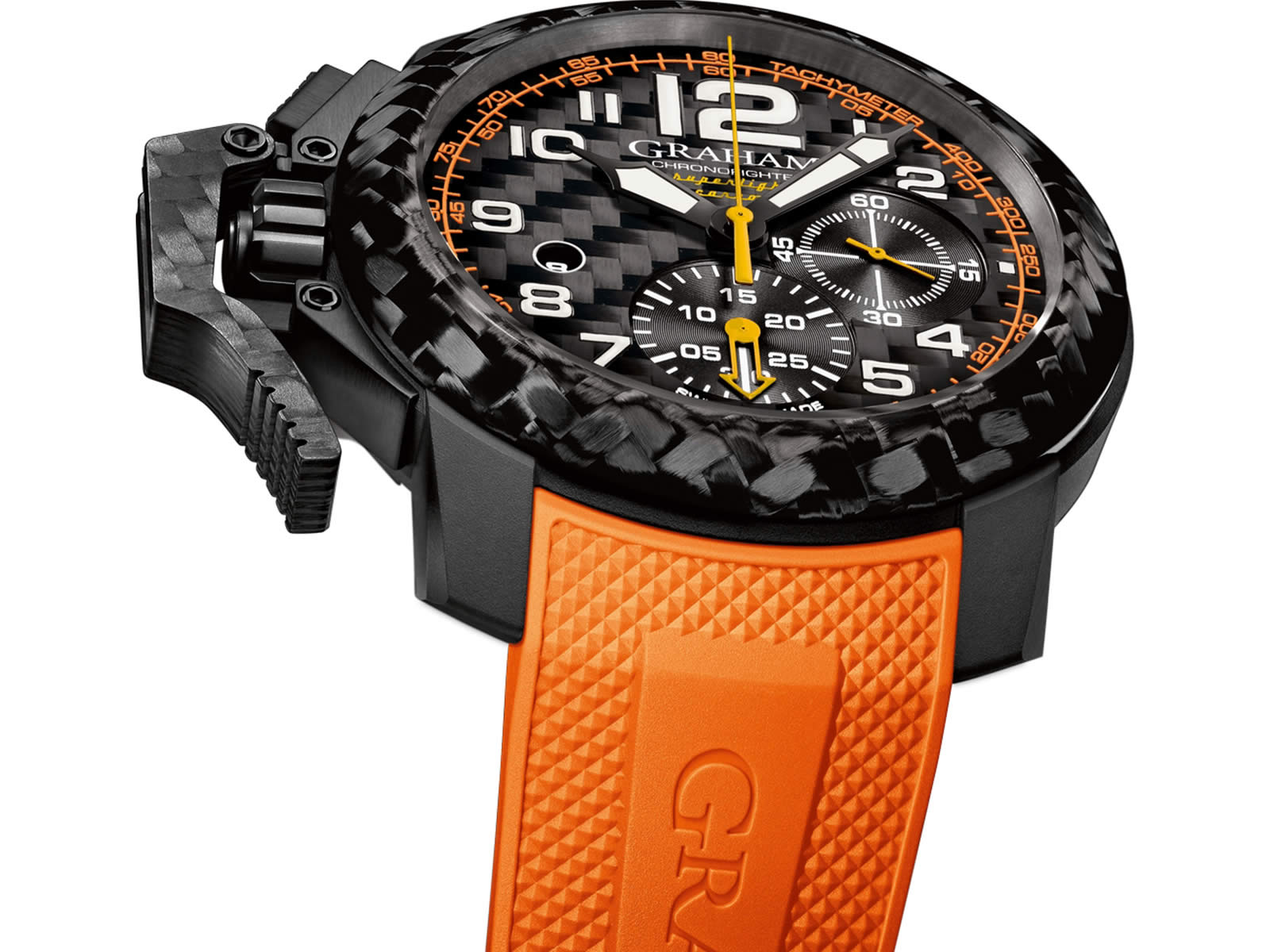 The case, which comes with 100 meters water resistance rating – a figure that is more than enough for a sports chronograph in terms of daily use, is equipped with double anti-reflective coating scratch resistant sapphire crystals on both sides. The front crystal is slightly domed which gives an additional depth to the dial while the rear one is smoked for a stealth look. 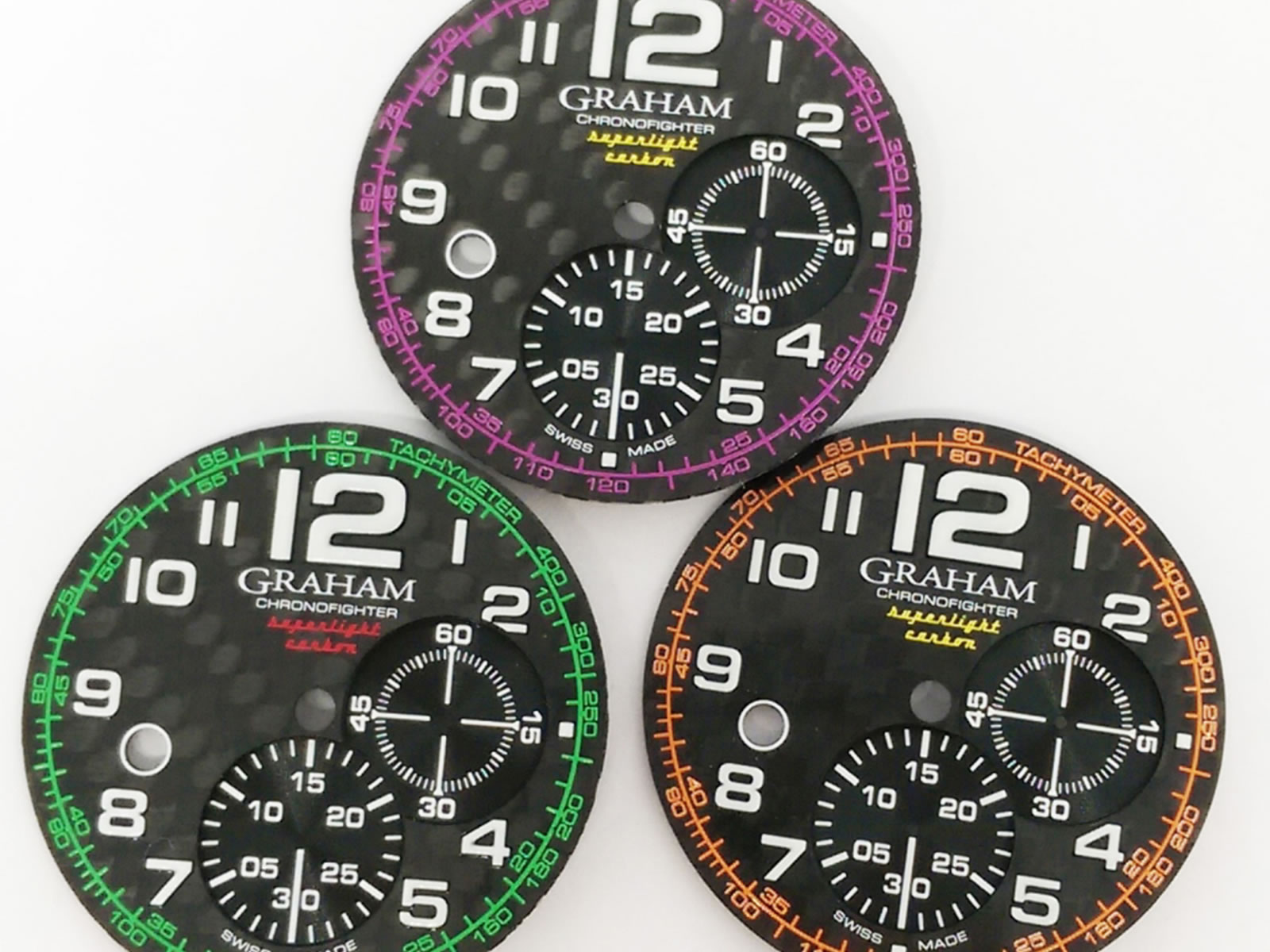 All the models in the collection are powered by the Caliber G1747. 25 jewels self-winding chronograph beats at 4Hz and offers a power reserve of 48 hours when fully wound. Equipped with a date display besides the 30 minutes chronograph and time keeping functions, the movement can be enjoyed through the sapphire crystal display caseback.

The most prominent feature of the newly added versions of the model family is the new and vivid color themes. The models in the new collection, which are available in three different versions, are accompanied by brand new straps of eye-catching colors. Including a black one for the users who would find the new colors too bold, all straps come with Graham signed pin buckles made of 3K Carbon composite material. 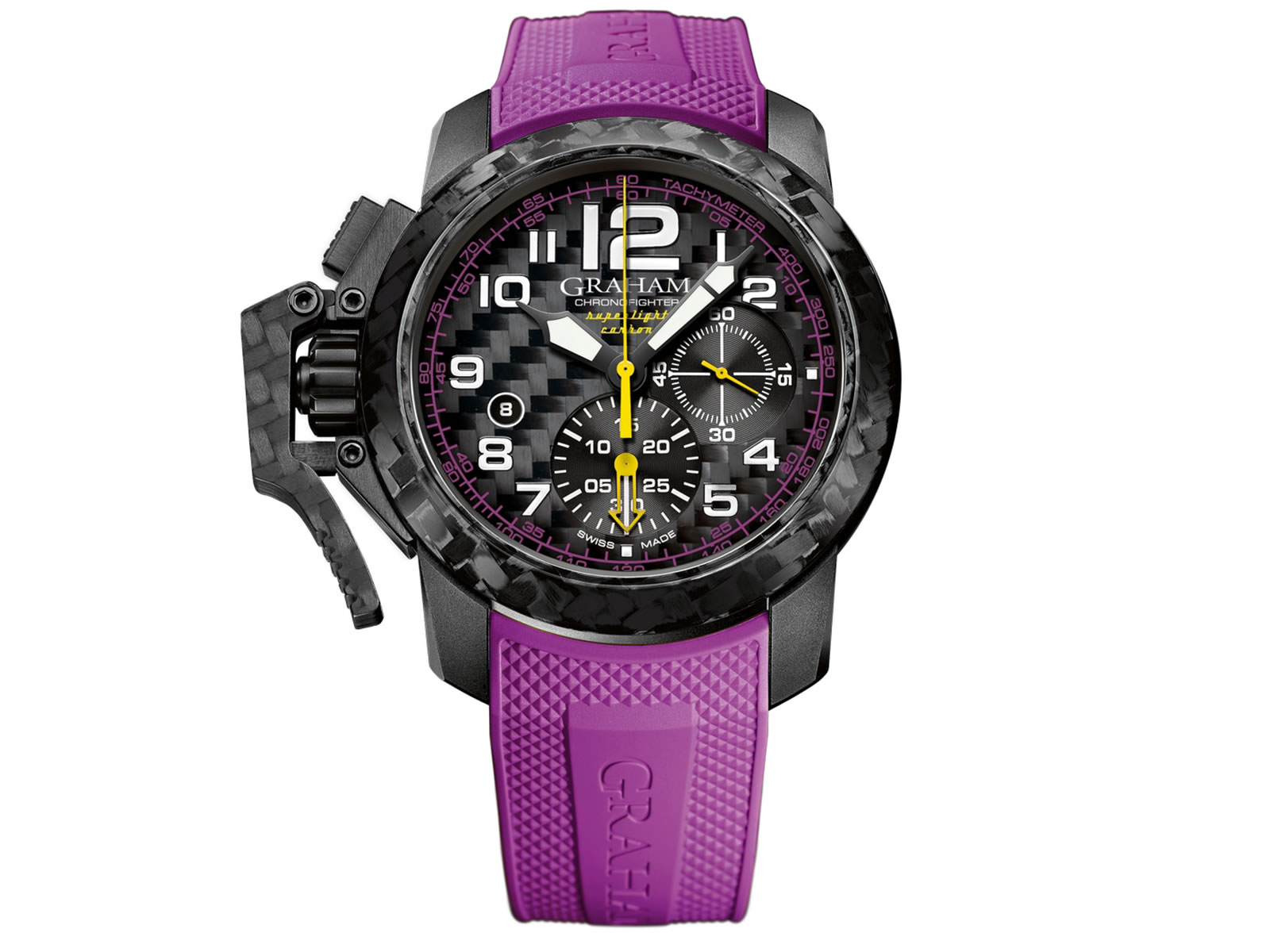 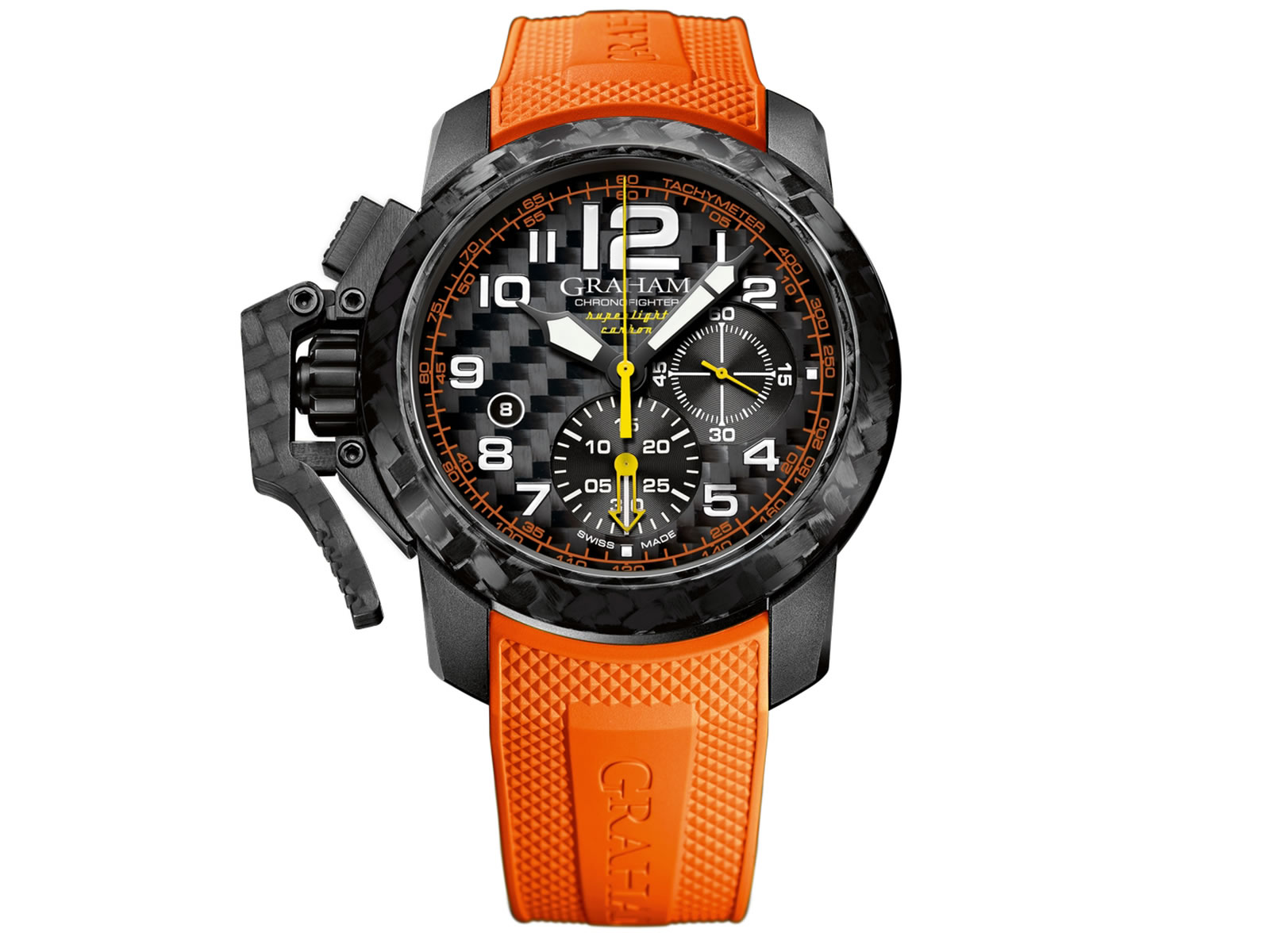 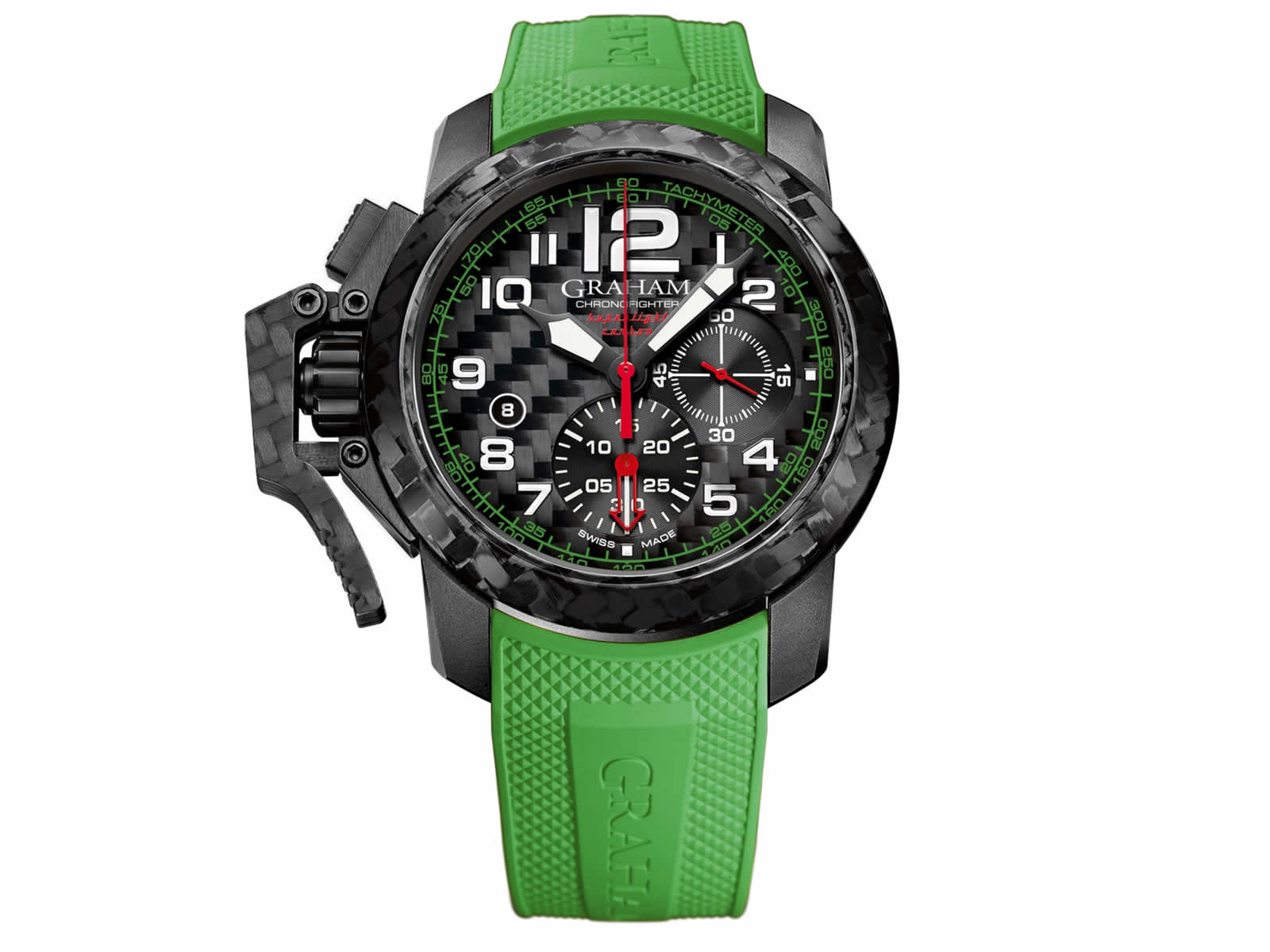