HYT, which has a special place among the contrarian names of the watchmaking industry with their fluid drive movements, was the guest of our with the HYT Skull Green Eye Limited Edition from the novelties introduced at the Baselworld 2015 exhibition. 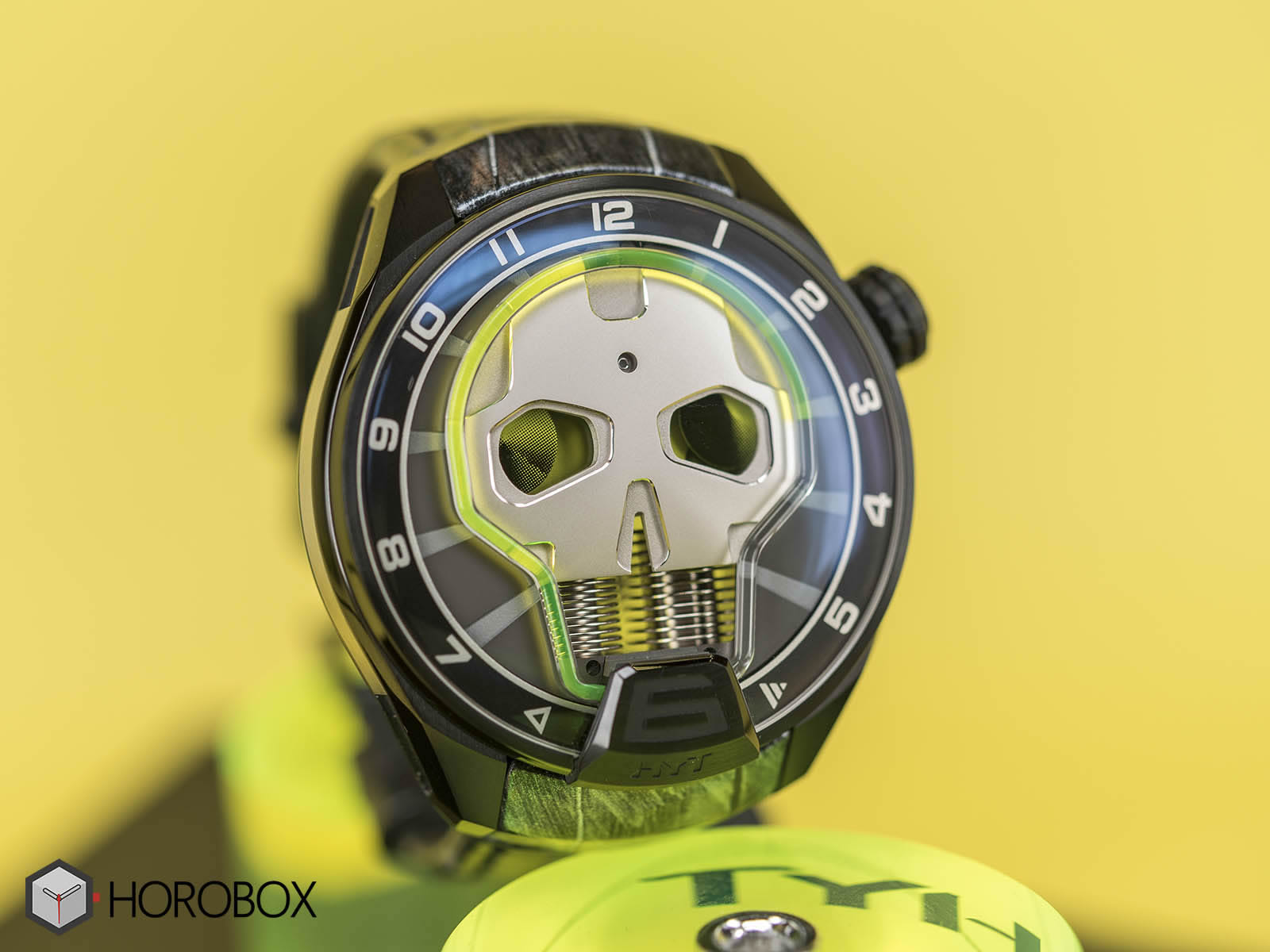 Today, many brands operating in the watchmaking industry are able to create models which deserve to be called unique regardless of their segments. Sometimes it is a feature that became more like a symbol for the brand is the reason for being unique or a significant innovation that the model offers. As a matter of fact, it is possible to say those two reasons both count for HYT as the fluid drive movement which has been debuted in the brand’s first model that has been introduced at the Baselworld 2012, became a signature detail for HYT while being a true innovation for the rest of the watchmaking industry. 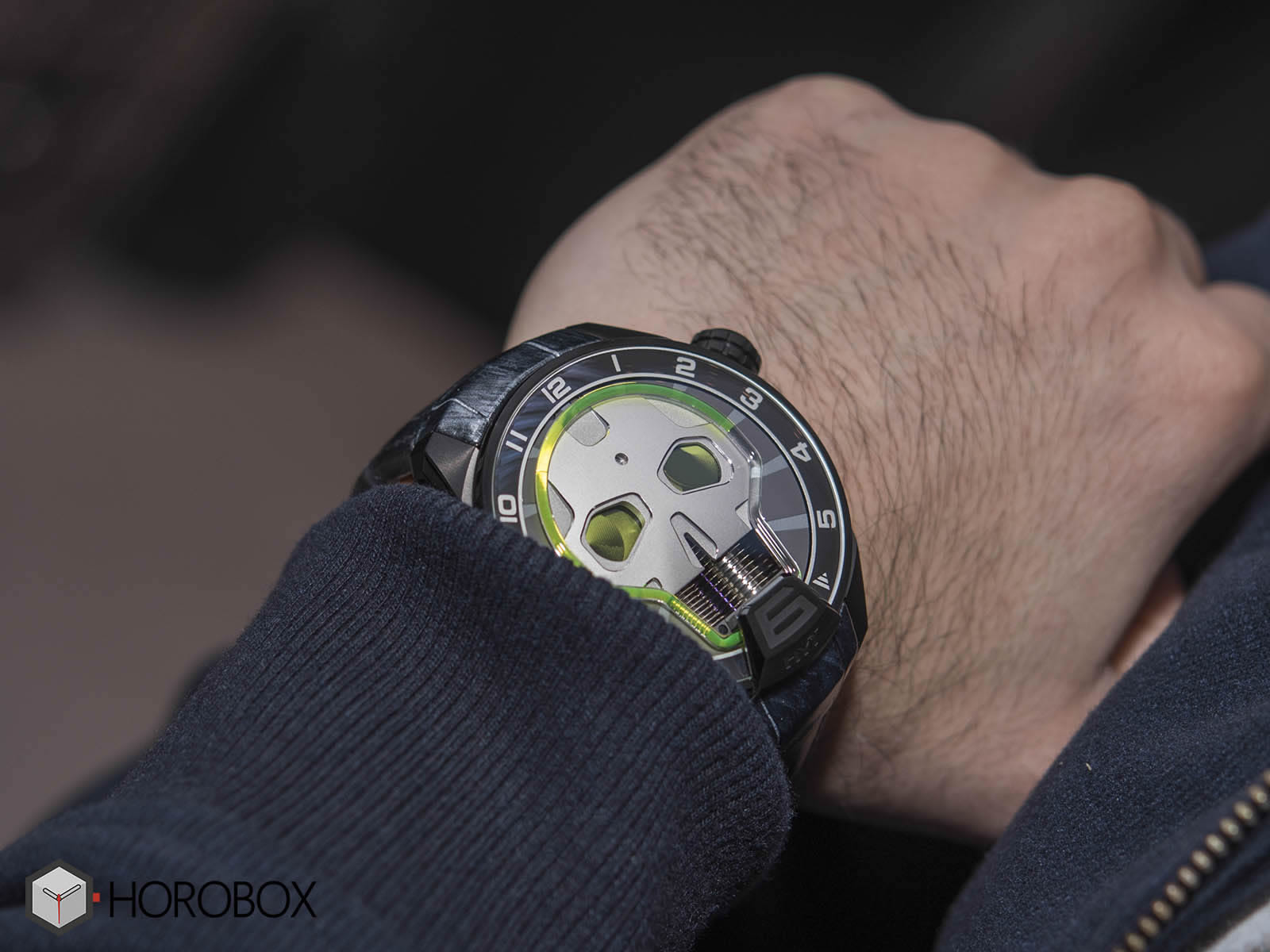 Of course, expecting those models, which are designed to bear such a unique and innovative working principal, to have classic or modest designs would be a little absurd. HYT timepieces, which can easily be noticed by even the least trained eyes, offer exactly the opposite of those features making them simply NOT for everyone.

“When you add the skull figure, which is interestingly adopted by the watchmaking industry for the last few years, to those born unique and bold presence watches, the picture you have looks more like the lexical meaning of the word “contrarian”.” 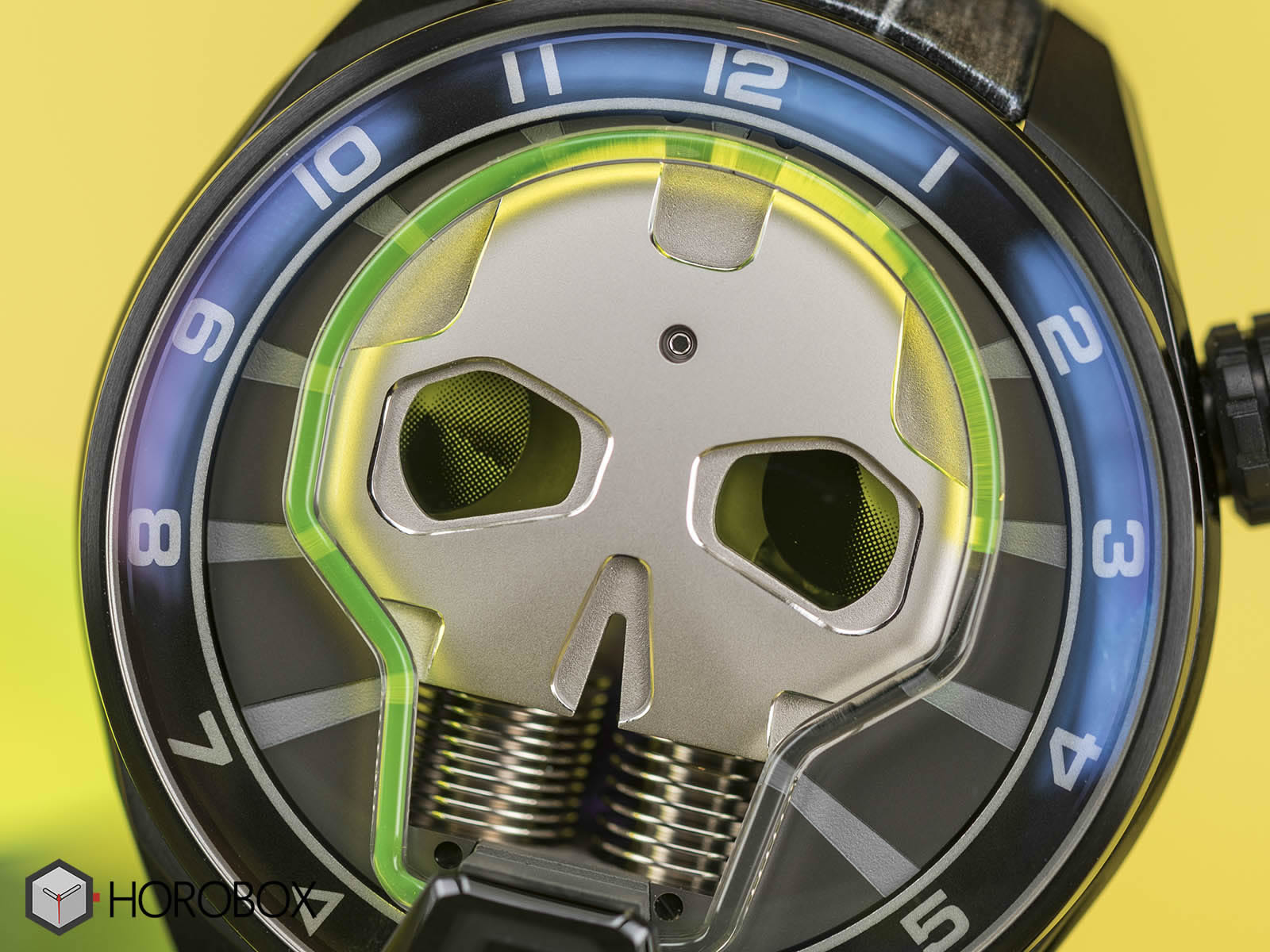 The model we choose for review is not a newly released model. However, it doesn’t really matter for a brand like HYT as you most probably will not come across one in your daily routine or find a dozen of it in a multi-brand luxury boutique’s window. 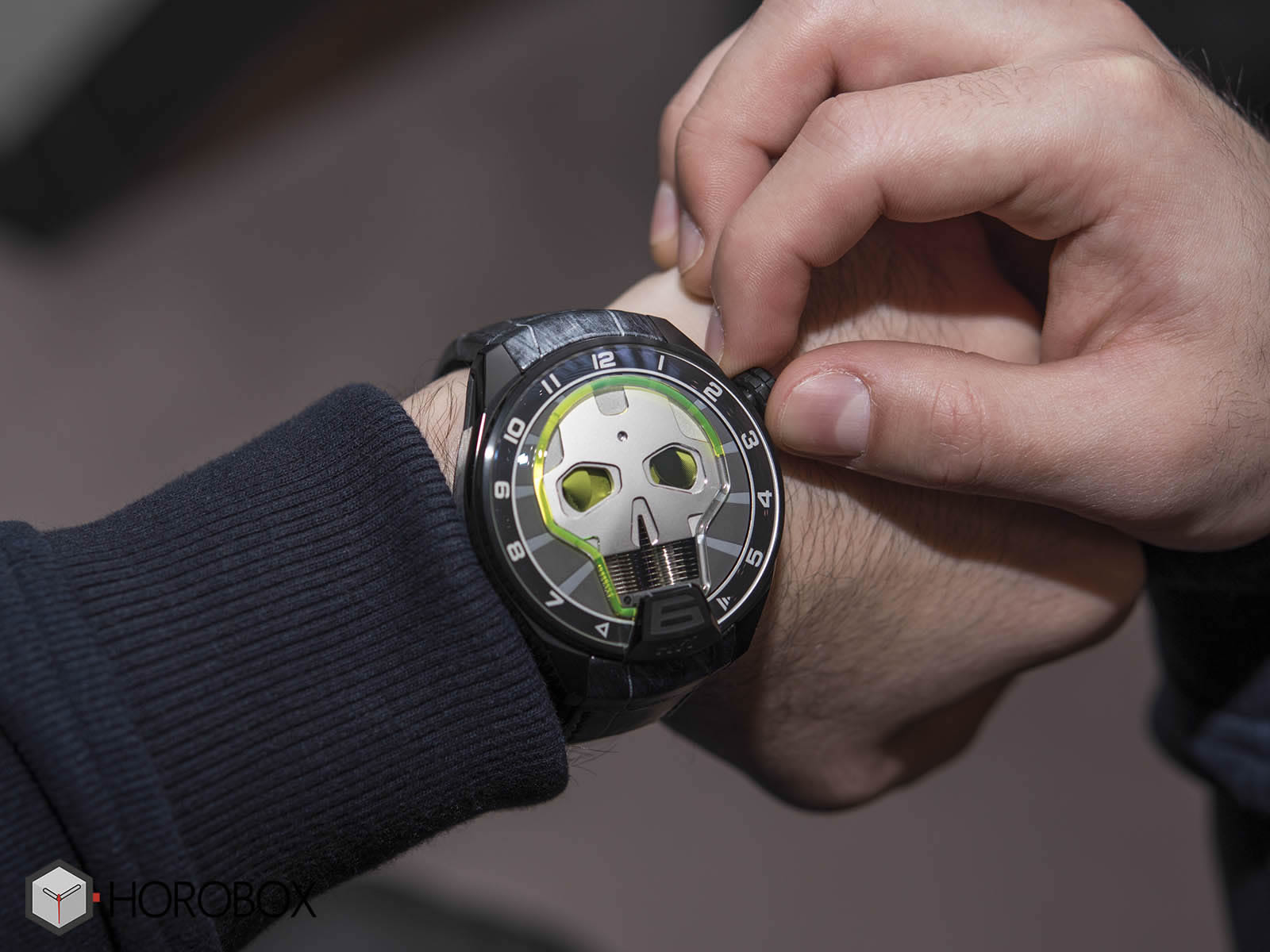 The timepiece, which we had the opportunity to see in person in one of Turkey’s most important luxury watch shopping spots - Quadran Boutique - Istinye Park AMV, is the HYT Skull Green Eye Limited Edition model of the two novelties that attracted attention with their color themes upon their introduction at the Baselworld 2015 exhibition. 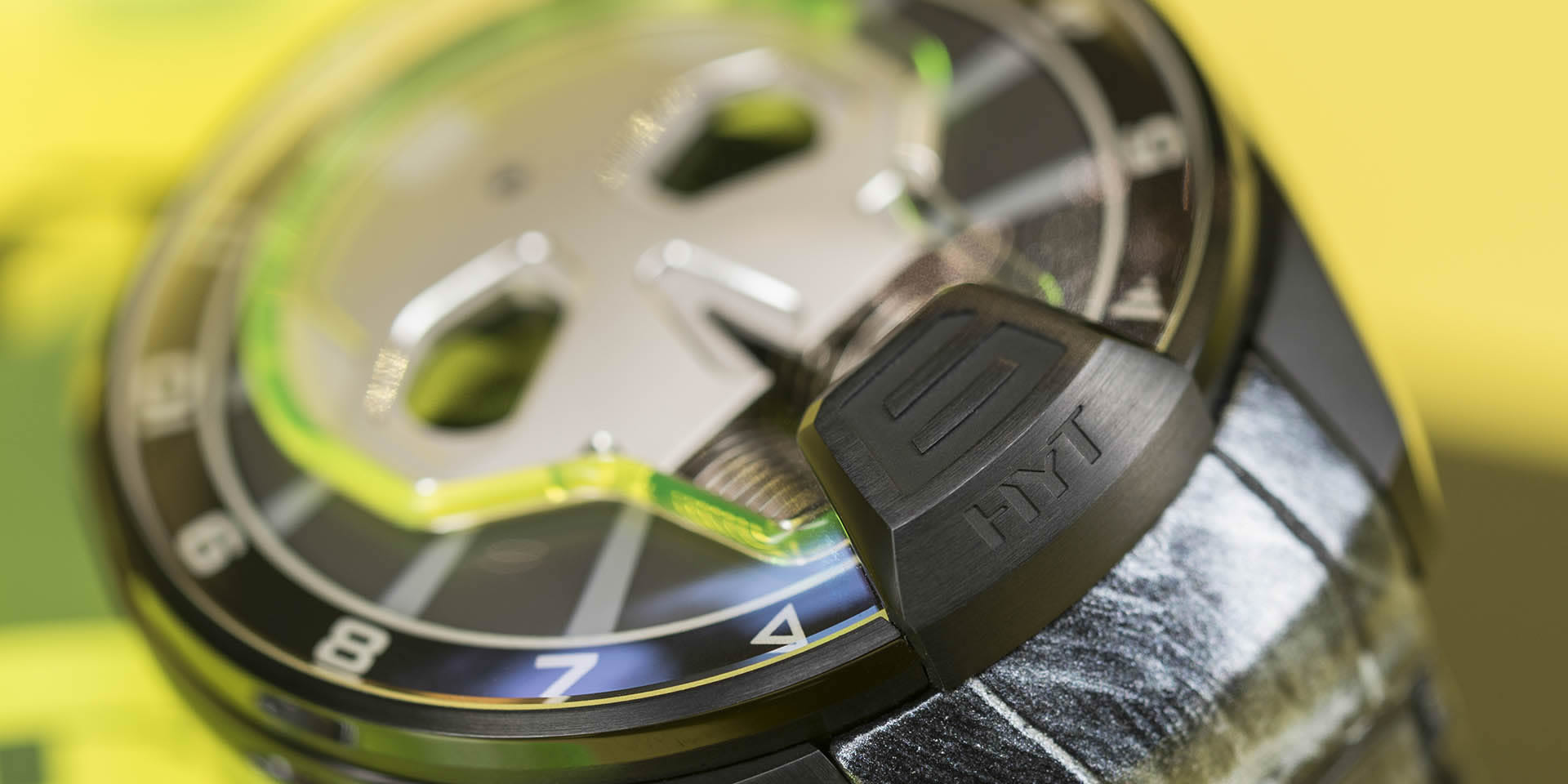 The model is offered in a blackened titanium case measuring 51mm in diameter and 17.9mm in height. As the numbers tell, the case is pretty big. However, how it wears is totally a different story as I found the watch to be extremely comfortable on my wrist. Frankly speaking, I am surprised with that situation which is mostly related to the use of lightweight titanium for case material. You can hide the HYT Skull Green Eye model effortlessly under your shirt’s cuff. In case you really want to hide such a unique timepiece like that, of course... The case is equipped with scratch resistant sapphire crystals on both sides. Water resistant to 50 meters, the case features updated crisp and angular lugs and a single winding crown located between 2 and 3 o’clock. 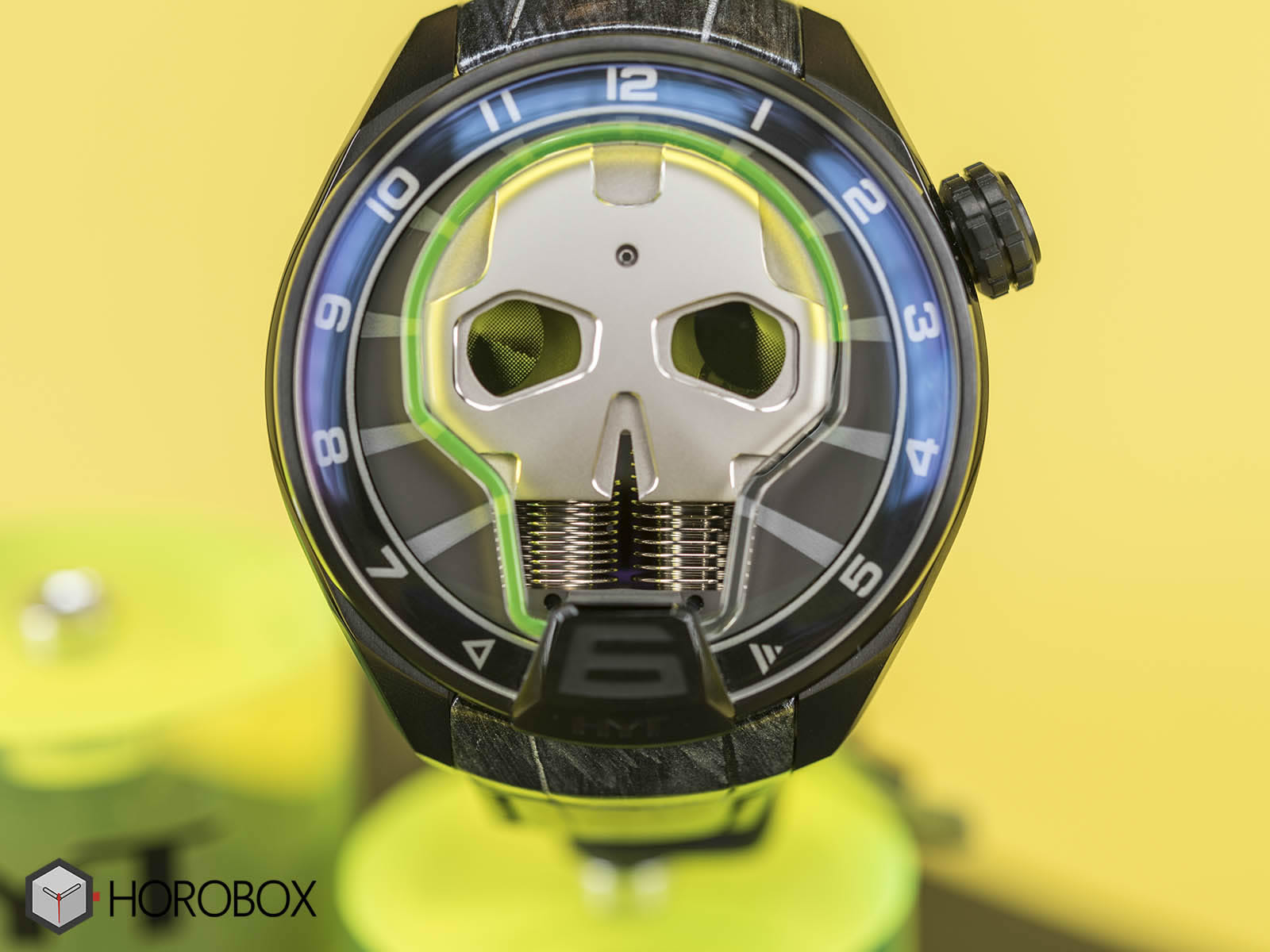 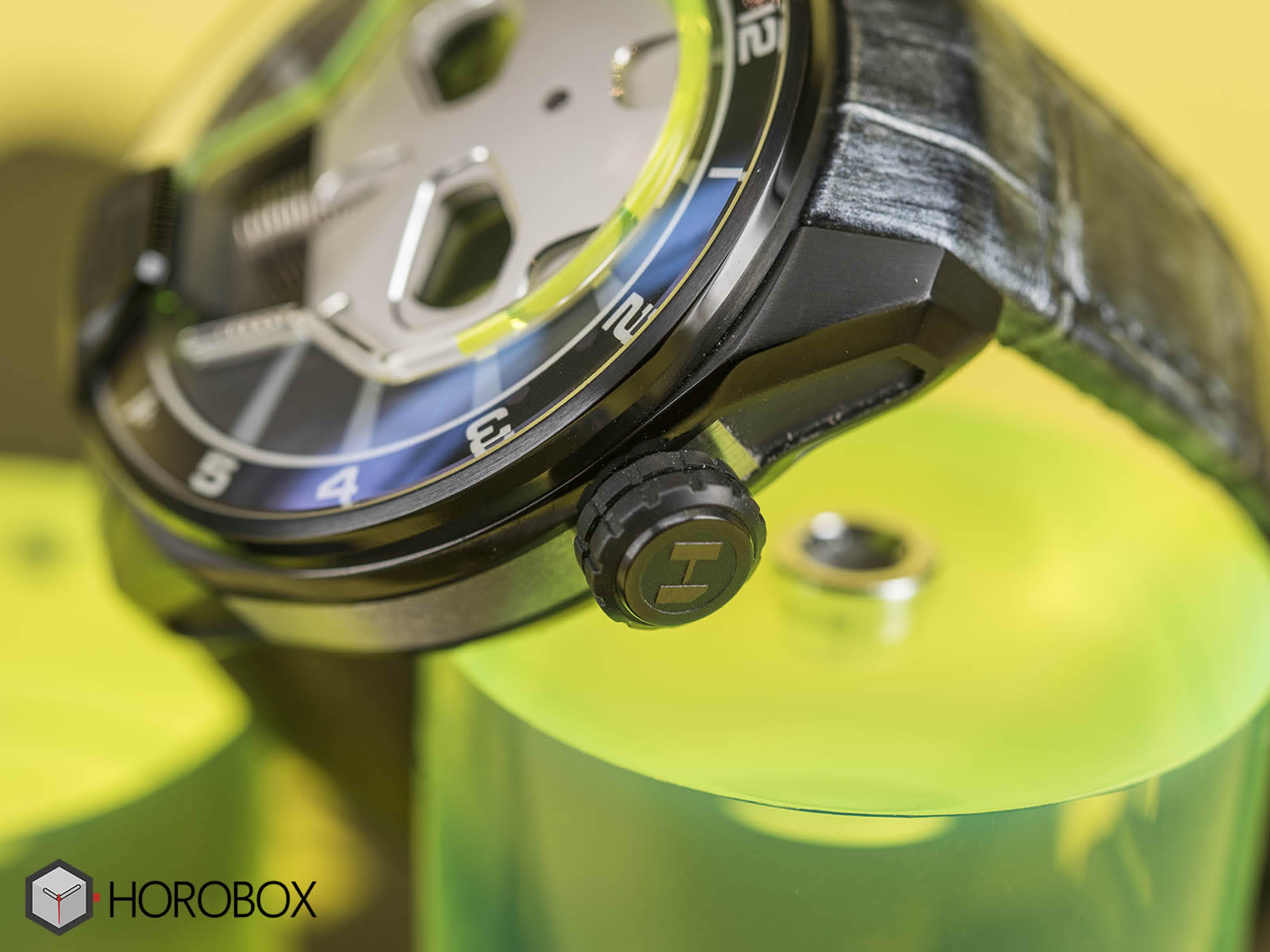 Although the model’s dial is designed to reflect the typical DNA of HYT, it contains significant changes compared to previous models. Other than the big skull figure the center, the most important change is the lack of minutes. HYT deleted the minute function that is arguably the only part in motion after the liquid filled tube. I believe HYT wanted to have all the attention focused on the skull figure and the green liquid around it by doing that (and if so, they succeeded). In the meantime, let me add that the tube is thinner than 1mm and curved at an angle of almost 90 ° in the corners. 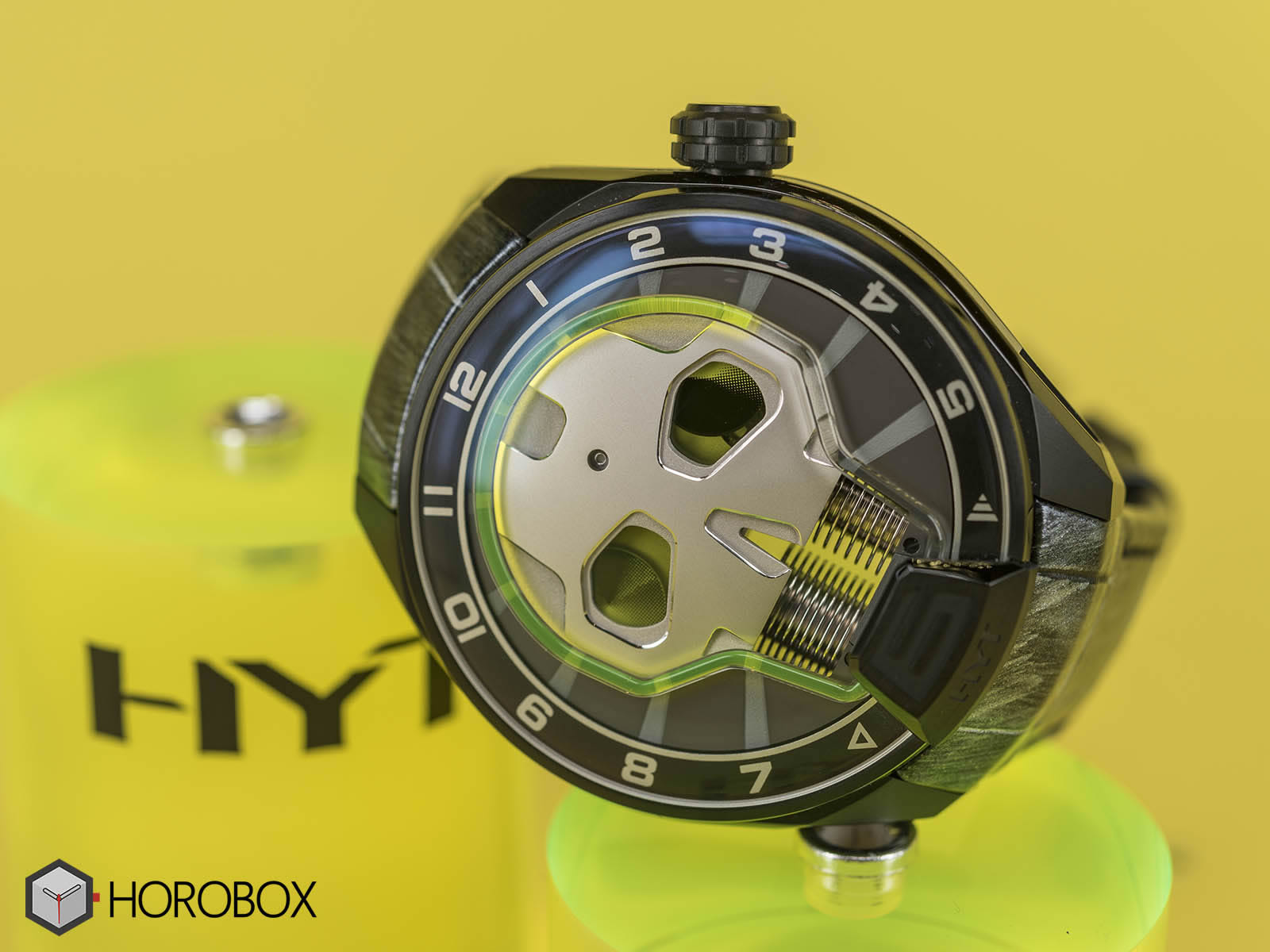 Another difference, compared to the previous models of the brand, is that the movement view from the dial side is almost entirely blocked. I guess this all the attention to the green liquid surrounded skull thing goes for this update as well.

Among all those stability, HYT has added different functions to the eyes of the skull figure, which has succeeded in giving surprising details the watch aficionados. The right eye bears the power reserve indicator function read by the green light that gradually reduces its brightness (turns into black) in sync with the power reserve going low. The left eye is the function which features a rotating indicator that is decorated with pattern bringing some extra heat to the dial.

The model with the brand’s in-house movement. 35 jewels hand-wound movement beats at 4Hz and offers a power reserve of 65 hours when fully wound. The movement, featuring rhodium plated bellows and bridges decorated with Cotes de Genève motifs, can be enjoyed through the sapphire crystal display . 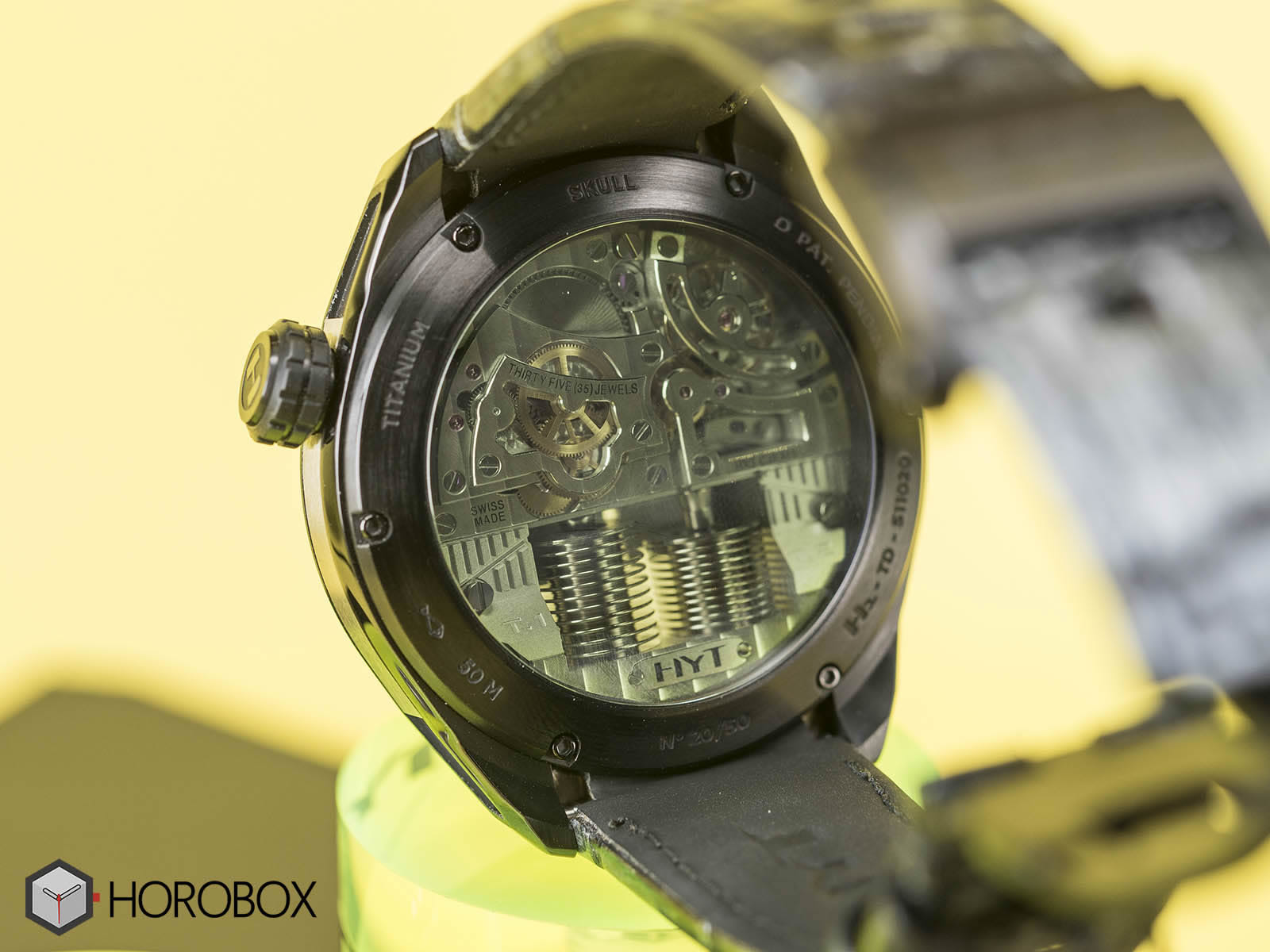 HYT Skull Green Eye Limited Edition (Ref. 151-TD-41-GF-AB) is limited to a span of 50 units only. Offered on a matt black alligator strap that is secured by signed folding clasp made of blackened titanium like the case, is available with of CHF 90,000 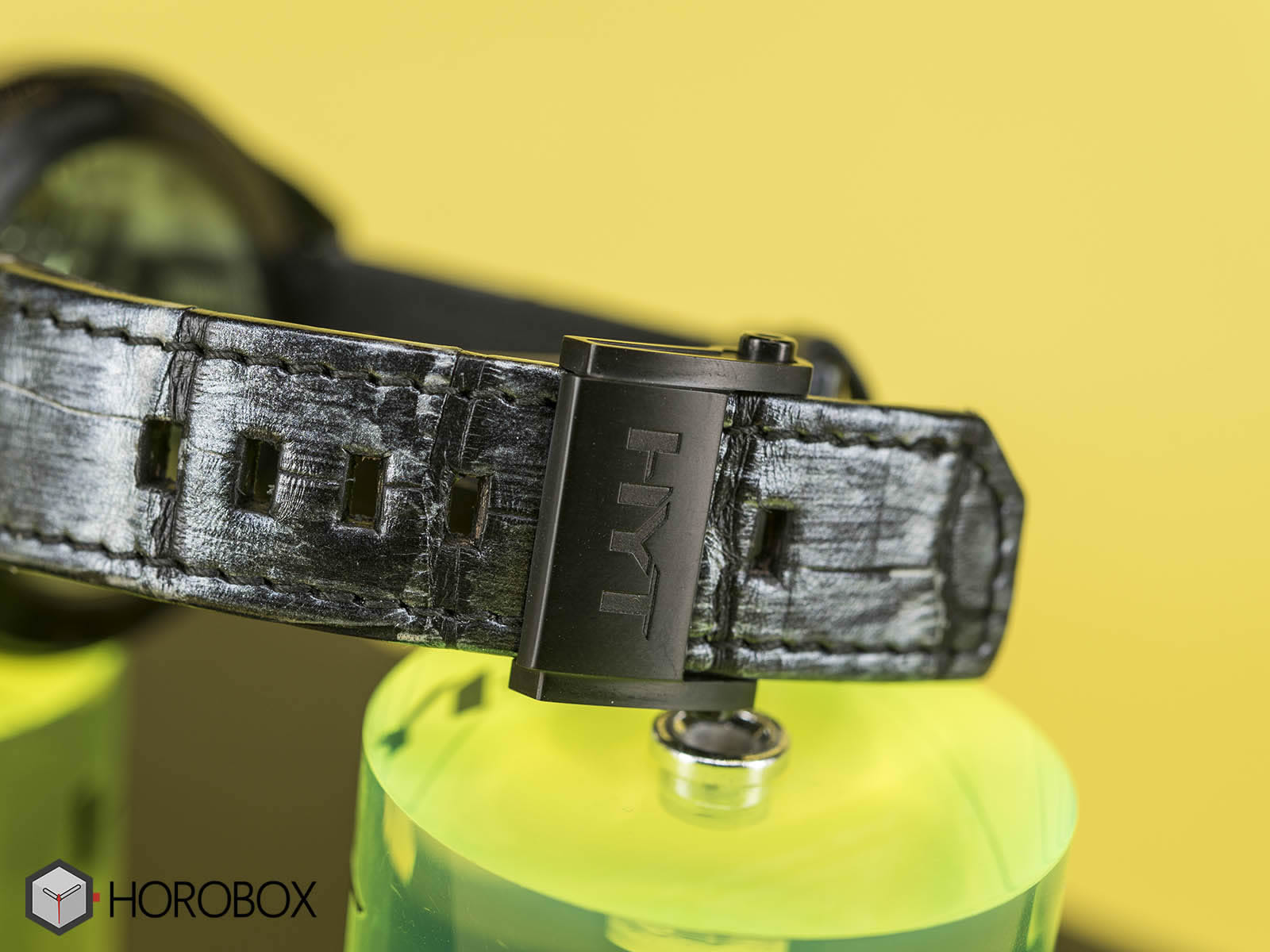