Pilot watches have been a fundamental device especially at the early years of aviation. USAF has employed a number of timepieces for the use of military pilots in 1920s and 1930s. Arguably, the most important version was the Reference Type A-7 which has been added to the inventory in 1934. The model was a great success with its mono-pusher chronograph and the trade mark 50C angled dial. The reference was followed with the word ‘’ Avigation ‘’ derived from the words aviation and navigation.

The first versions of the Type A-7 watches have been produced in the era between two world wars. Practically they were modified versions of pocket watches with mono-pusher chronograph function. The angled dial allowed the pilots to read the time without taking their hands off the plane’s controls. Mono-pusher chronograph function on the other hand was useful for operating with gloves and/or under extreme conditions.Type A-7 watches served for USAF for a long period of time making them one of the most sought after timepieces in the world of vintage military watches.

Being one of the most successful brands in producing excellent re-issue models like the Legend Diver and Heritage 1935, Longines presented the modern version of that classic military timepiece with the reference Longines Avigation Type A-7.

The oversized 49mm case is made of stainless steel. Longines Avigation Type A-7 bears great resemblance with the original models in several details. One of the most important similarities is the side opening case back like the hunter case pocket watches. Inside the case back, we see the information engraved about the watch. The sapphire window allows the user to watch the column wheel chronograph movement.

The case sports double sapphire crystals on both sides. The front crystal suits the retro character of the watch nicely with its slightly domed form.

The wide case of the watch sits on the wrist with a nice balance thanks to the long form of the lugs.

The wrist presence of the 49mm case is quite bold. It is almost impossible to hide the watch under a cuff. However, the wearing comfort is well over what we expected from such a big and thick timepiece. If you are not a very small wrist person, you will not be bothered with the Longines Avigation Type A-7 strapped to your wrist during the day.

The dial is designed like the most of the classic military watches with contrasting white markings over black background for improved visibility. The dial features a small second and a 30 minutes counter like the original design. The extras with the modern version are the date function and tachymeter scale chapter. The fonts used for the indications are the same with the original Type A-7 timepieces as well.

50C angled dial makes us recall the vintage timepieces made exclusively for race drivers. This unique dial is practically the most characteristic detail of the watch.

The watch is powered with the automatic Caliber Ref. L788.2 which is exclusively designed for Longines. The movement features a column wheel chronograph module which we are familiar with higher price timepieces. The movement offers 54h power reserve when fully wound.

Longines Avigation Type A-7 is offered on a black crocodile leather strap with contrast stitching. In order to keep the vintage look, the strap is accompanied with a tang buckle instead of a folding clasp.

Producing Re-Issue models is pretty popular these days as many brands have already presented modern versions of their classic timepieces of past collections. Longines is remarkably good with that as the Legend Diver and Heritage 1935 models were highly appreciated with the authorities and the watch enthusiasts. Personally, Longines deserves to be appreciated with the Longines Avigation Type A-7 for two reasons; 1) picking up such a great classic to re-born and 2) throwing in a column wheel mono-pusher chronograph movement with a price tag of under 5000, 00 USD. Well done... 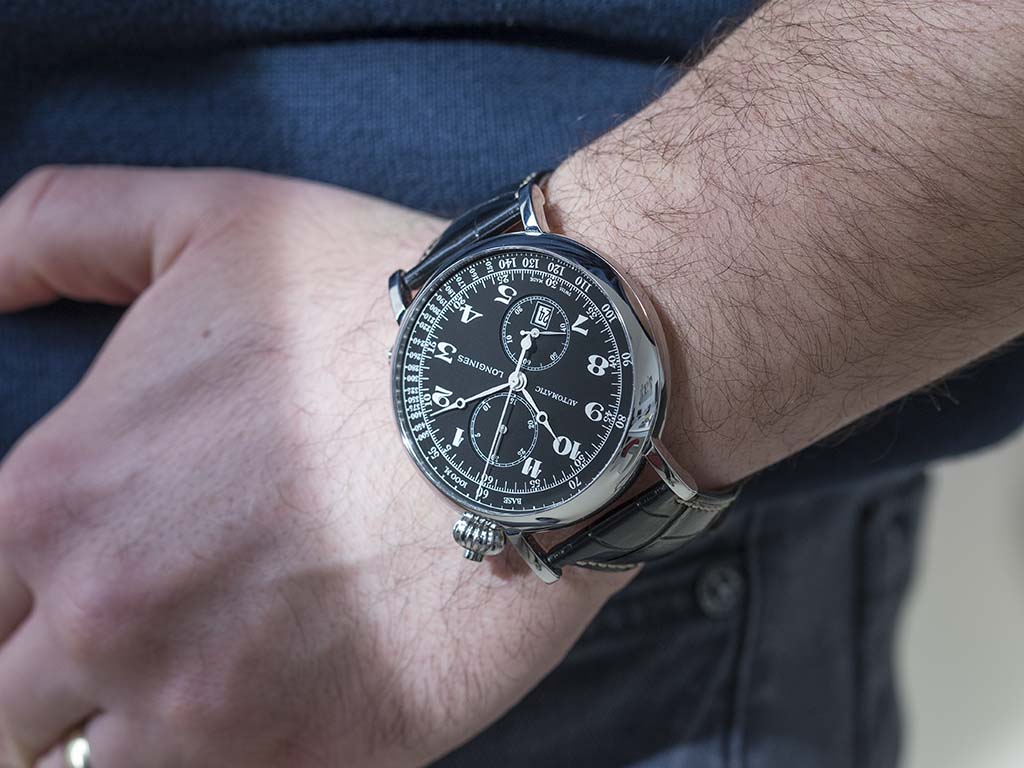