The Railmaster Collection, which got in to Omega’s current product line after showing up in the limited edition 1957 Trilogy Set issued for the 60th anniversary of the brand along Speed master and Sea master 300 models, is under the spotlight with the “Denim” version that refers to the model family’s industrial identity. 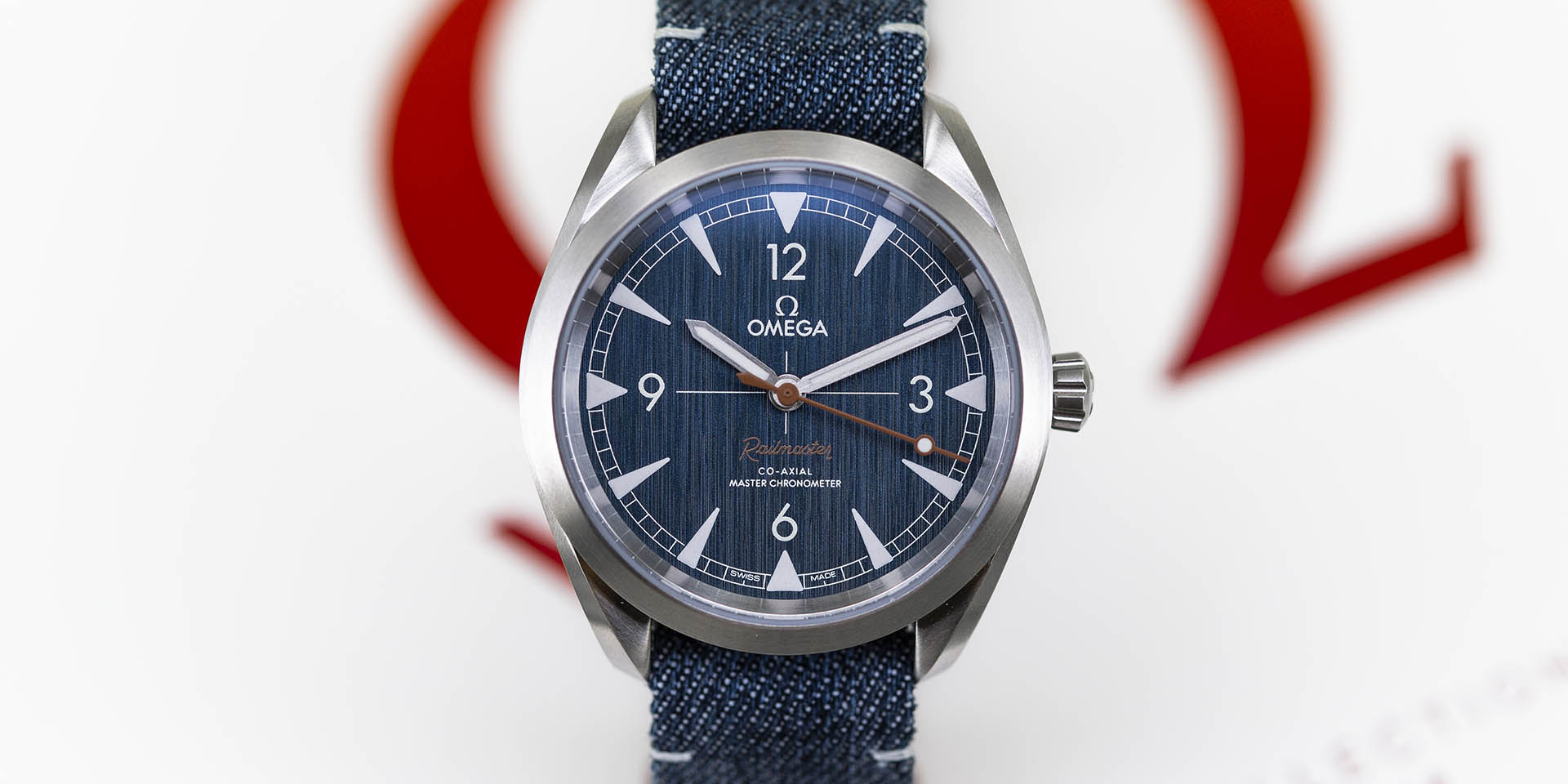 Omega, which is among the heavy hitter Swiss watchmakers, celebrated its 60th anniversary last year. In order to commemorate this special occasion, the brand issued a special set of three watches including a Speedmaster, a Seamaster 300 and a Railmaster, which has been away from the Omega catalogs for a long time. The 1957 Trilogy Set was an instant success, which led Omega to add the Railmaster Collection to its current product line. Here we have the Omega Railmaster Co-Axial Master Chronometer "Denim" model from the collection, which draws attention with its Blue Jean dressing that tributes to the model’s industrial character. 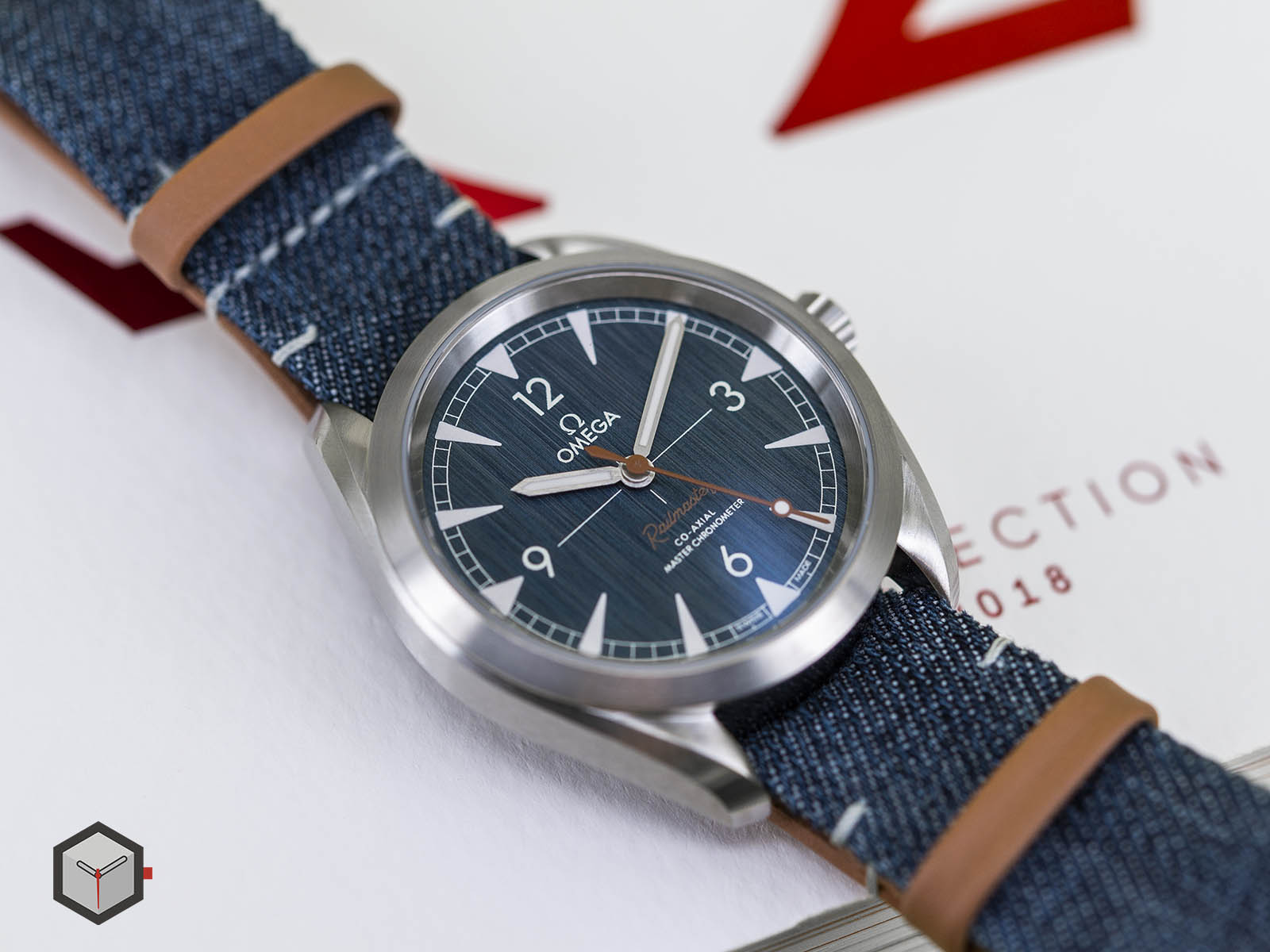 The model is offered in a stainless steel case measuring 40mm in diameter. The case is equipped with a double domed, anti-reflective coating scratch resistant sapphire crystal on the front face and a solid stainless steel case back at the rear face that features a beautiful embossed Railmaster logo and the brand’s patented NAIDAD Lock system. 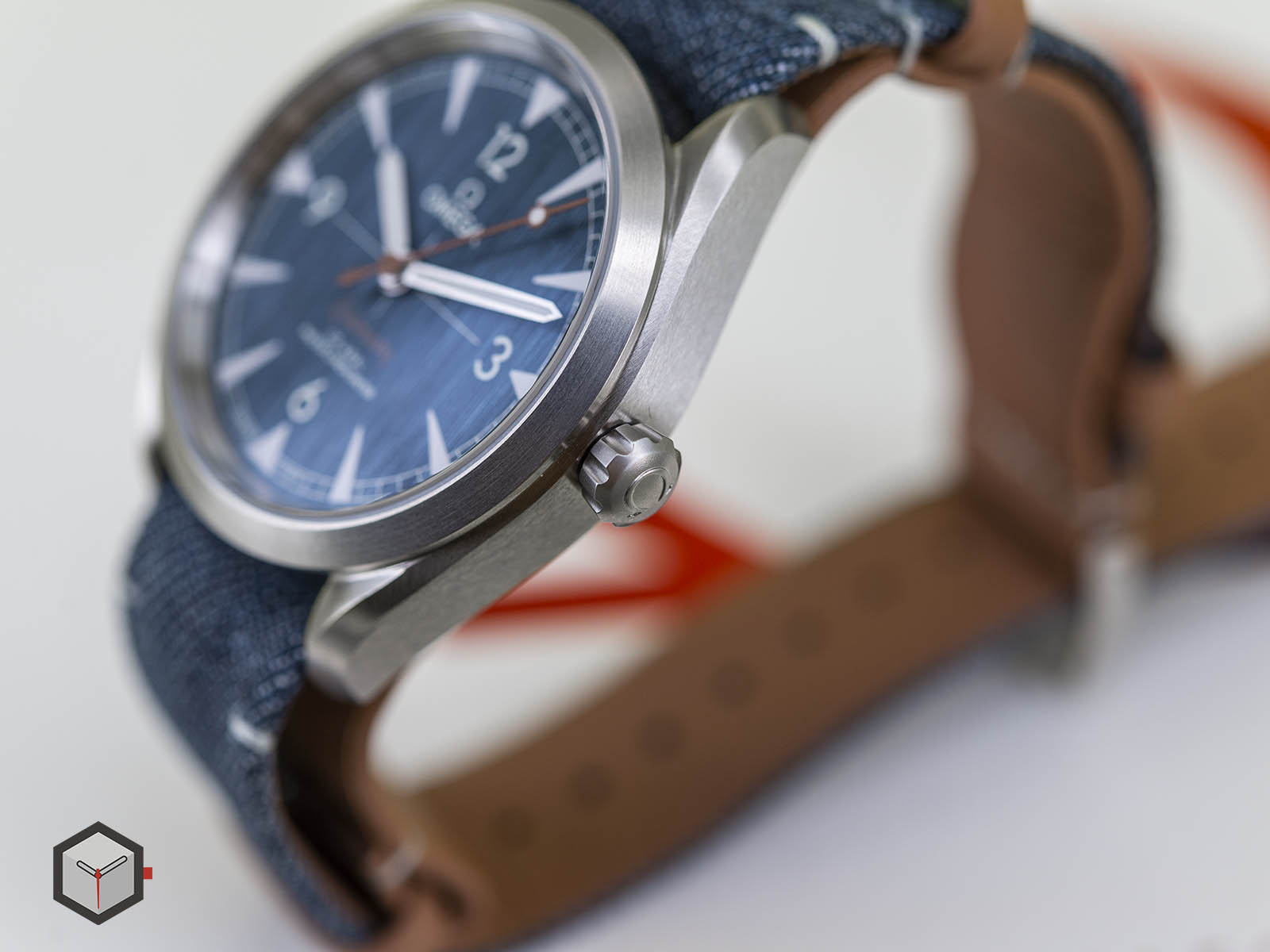 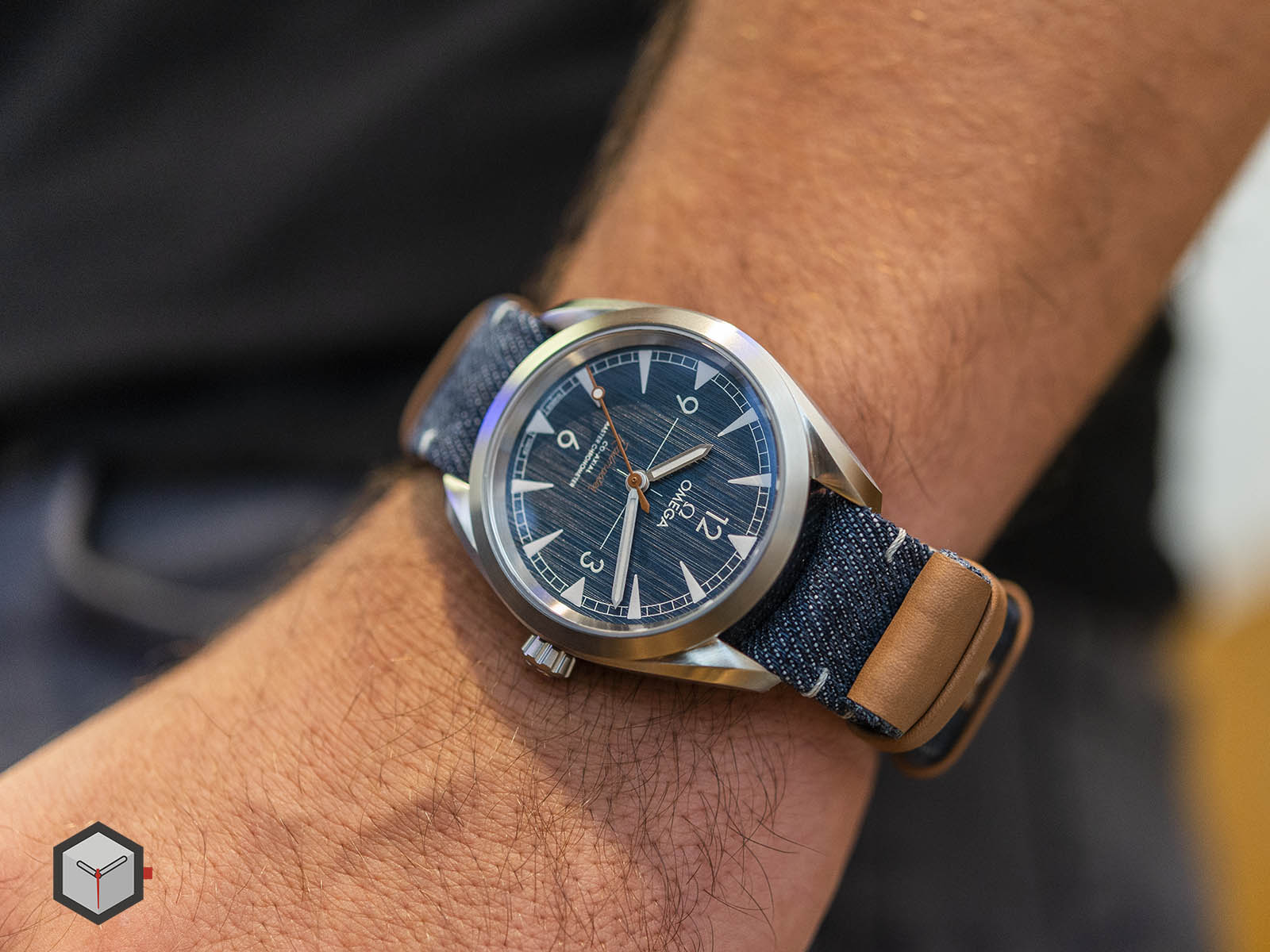 Highlighting the model’s Tool Watch identity with its satin-brushed finish, the case is water resistant to 150 meters / 15 bars. 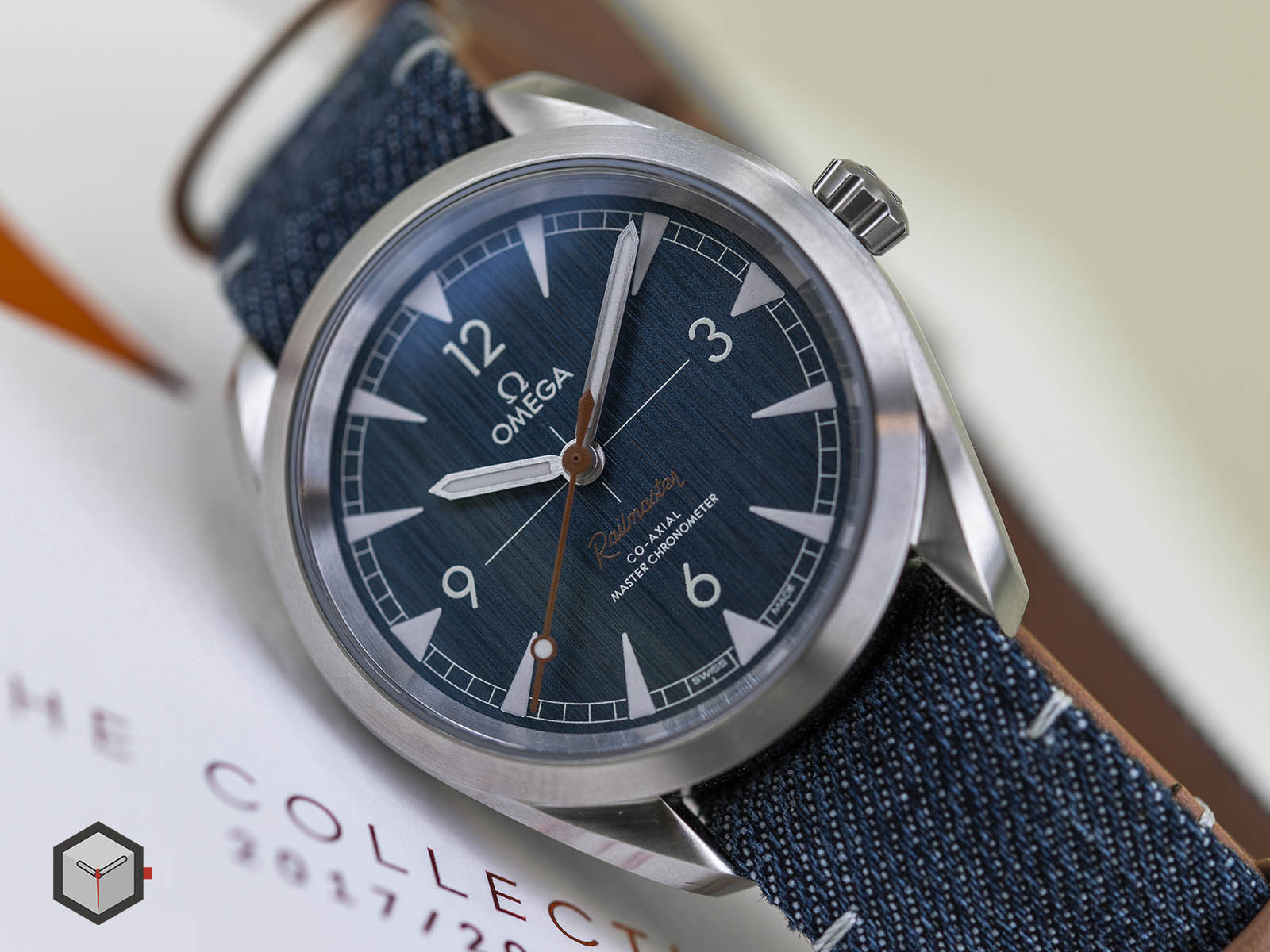 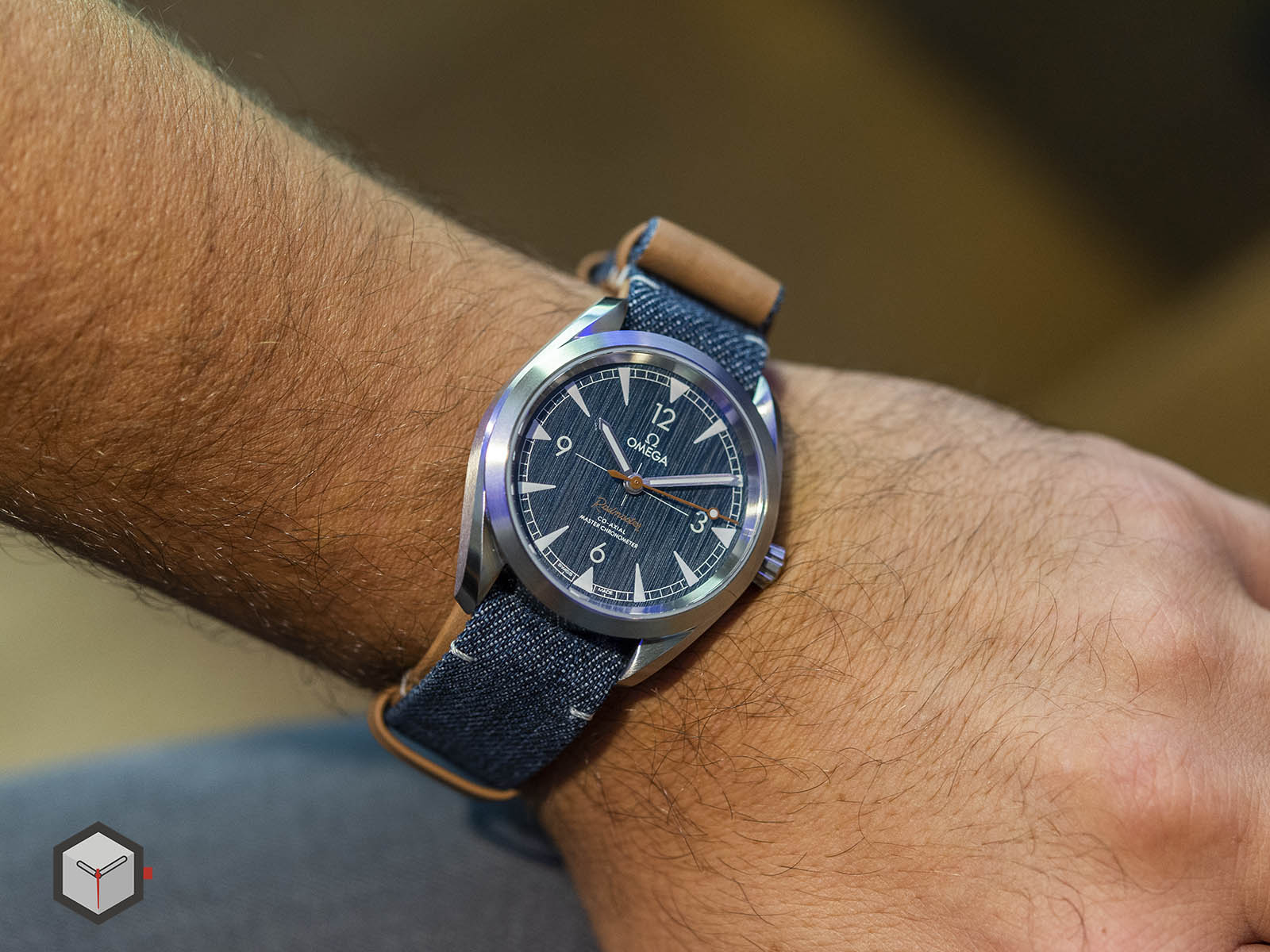 Omega Railmaster Co-Axial Master Chronometer "Denim" comes with a vertical brushed blue dial that matches with the model’s Denim concept. The dial features signature Railmaster Collection details that represents the model family’s DNA successfully like the large + symbol on the center and the railroad style minute scale. The dial is equipped with sword hands and frameless hour markers that are applied with Super LumiNOVA phosphor material, which offers an optimal legibility under every occasion. The lollipop style second-hand and the Railmaster text on the dial is finished in light brown in order to evoke the look of contrasting stitches on Blue Jeans. 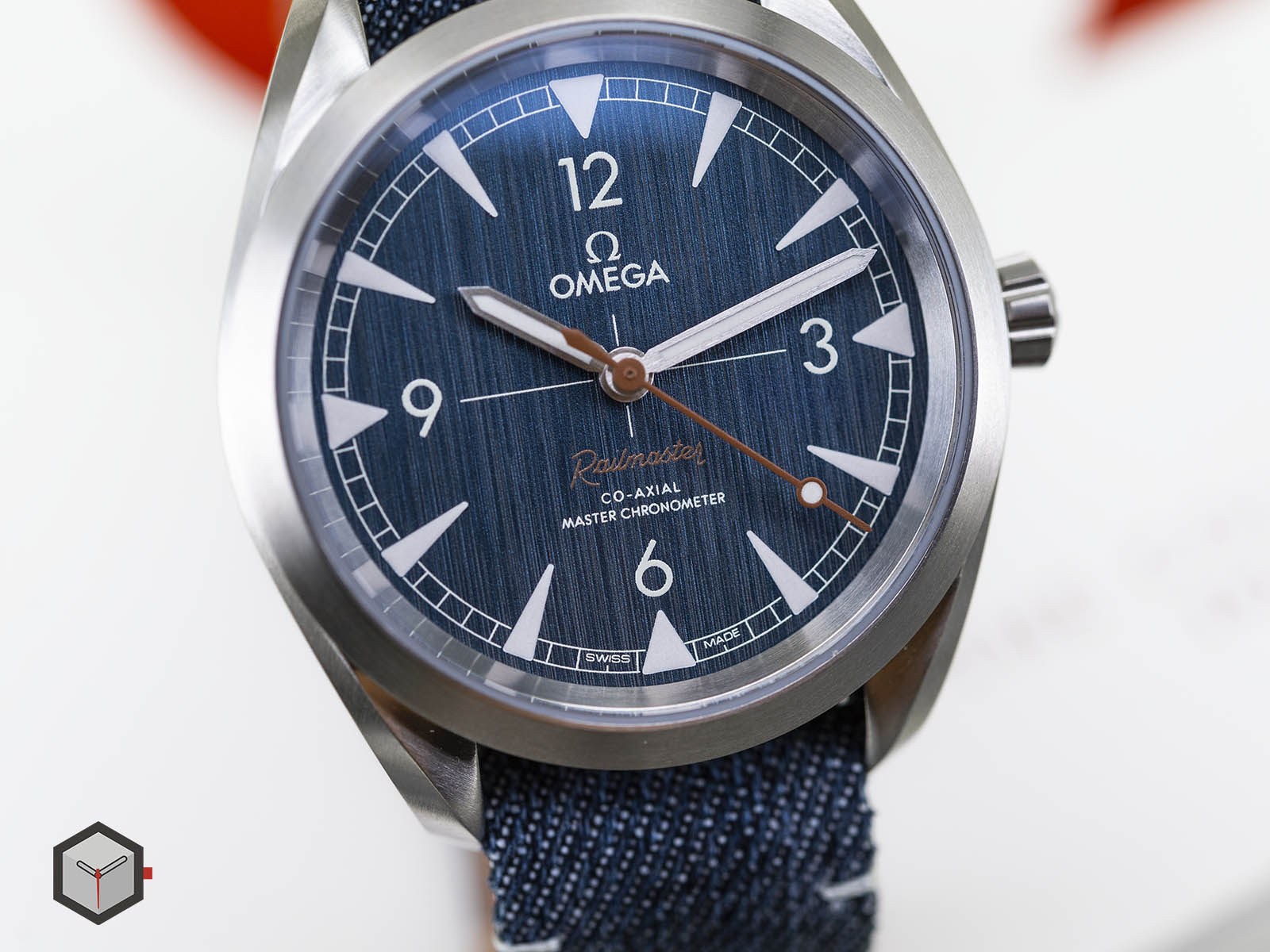 The model is powered by the Caliber 8806, which is a member of the brand’s Ref. 88XX movement family that we see in many modern Omega timepieces. 35 jewels self-winding movement beats at a frequency of 25.200vph and offers a power reserve of 55 hours when fully wound. Featuring the brand’s patented Co-Axial escapement, the movement is equipped with hi-tech components like a free sprung balance and a silicon balance spring as well as top of the line cosmetic touches such as rhodium-plated rotor and bridges with Geneva waves in Arabesque. The technical and visual features of the movement, which is resistant to magnetic fields reaching 15,000 Gauss, is Master Chronometer certified by METAS. 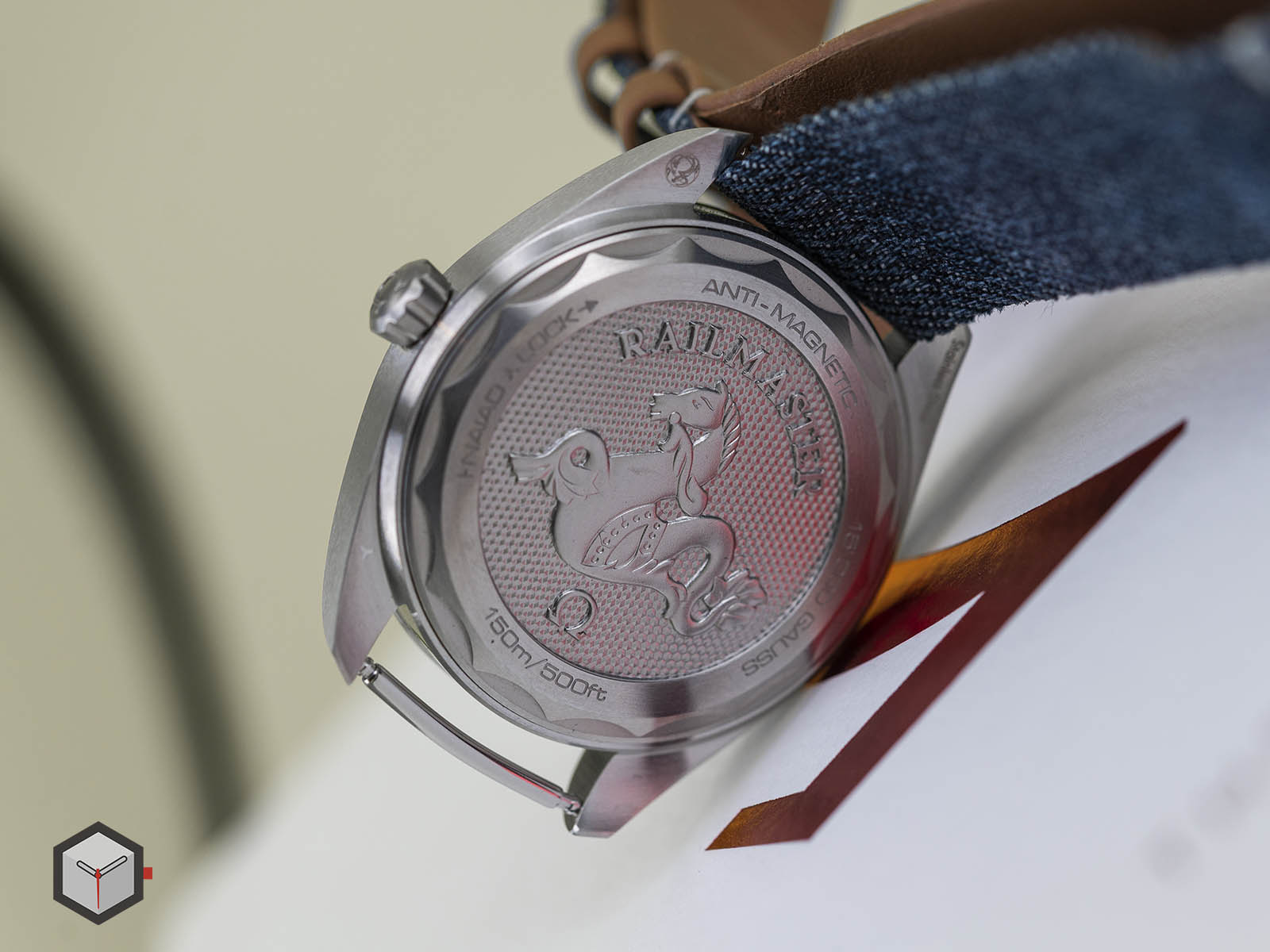 “The model’s strap, which is one of the most distinctive features of the Omega Railmaster Co-Axial Master Chronometer "Denim", is made of genuine Blue Jean fabric applied over a light brown leather lining. The strap is secured by a stainless steel Omega signed pin buckle and decorated with contrasting light brown stitches that tribute to the stitches on Blue Jeans. Besides the beautiful denim strap that expresses the Denim concept of the model, there is also a metal bracelet option.” 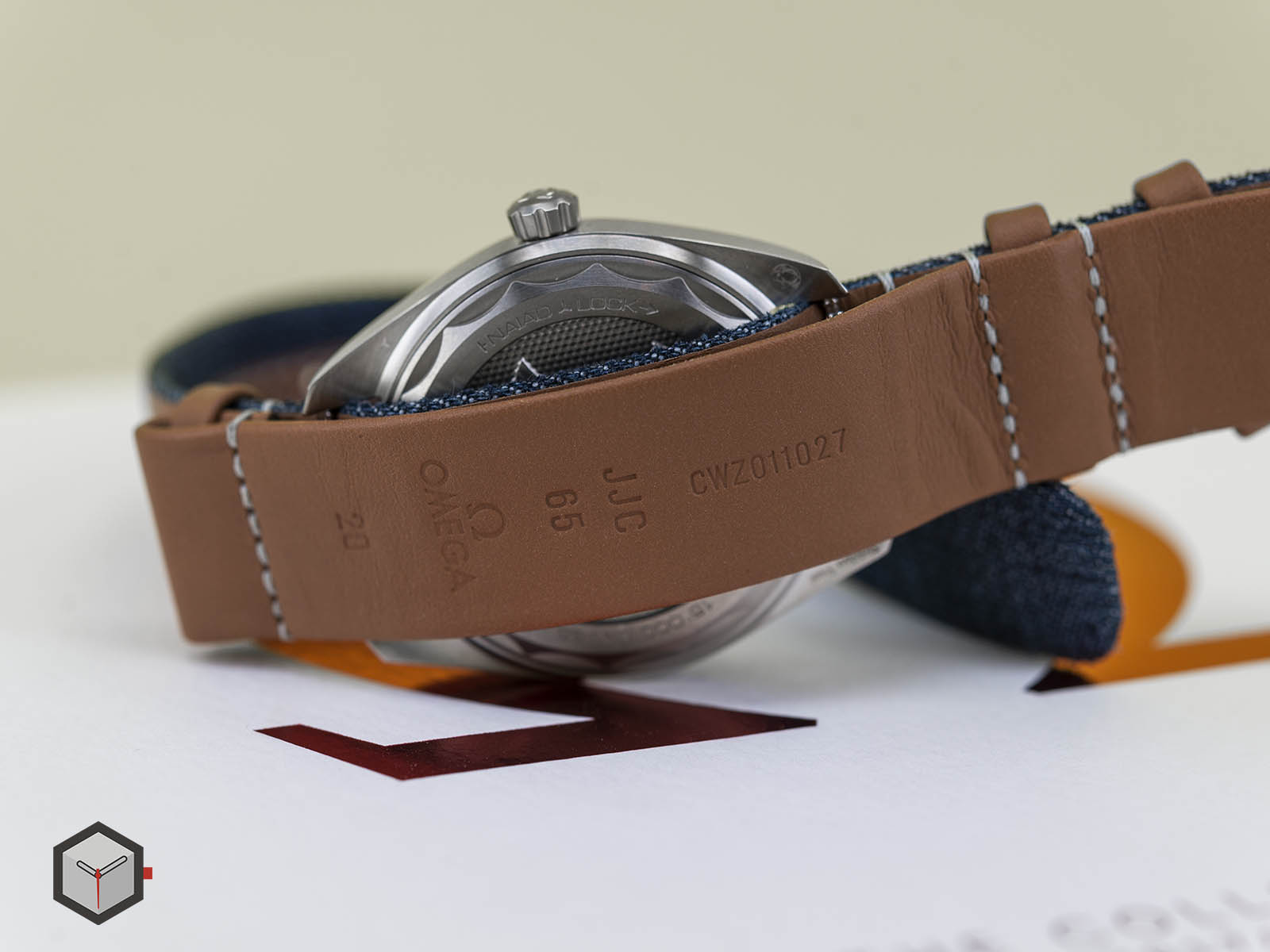 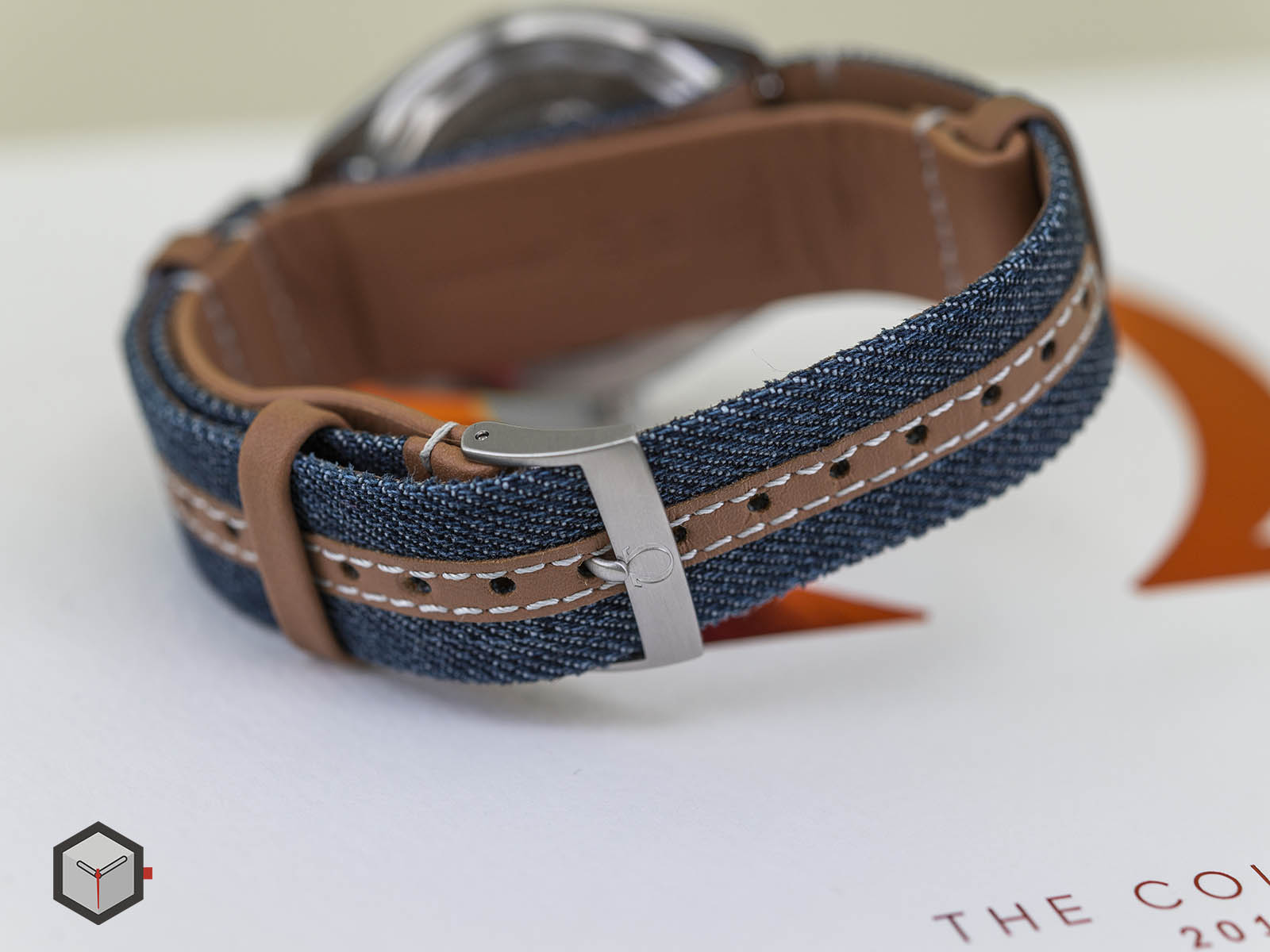