Richard Mille, who has managed to be followed by all the watch enthusiasts with its high acceleration success in recent years, is under the spotlight with the model RM 35-01 Rafael Nadal which is designed for the legendary tennis player. 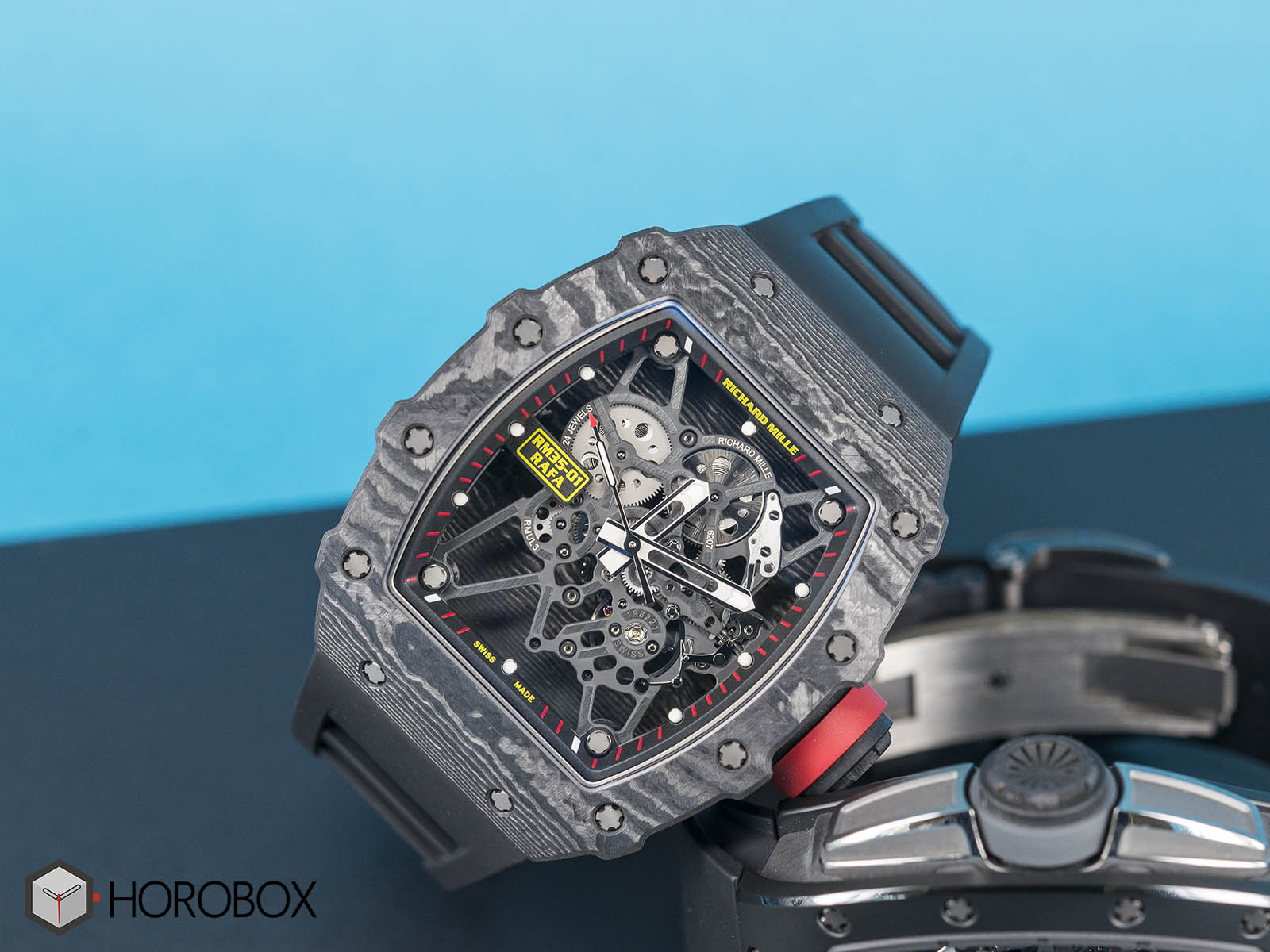 We can say that the brand is extraordinarily successful as it was founded in 1999 and sold its first timepiece in 2001. Despite its young age, the brand is considered as the best sports watch manufacturer in the world of horology. Many watch aficionados who like sports watches keep dreaming about the brand while it boosts its popularity with its high-tech materials and amazing complications. 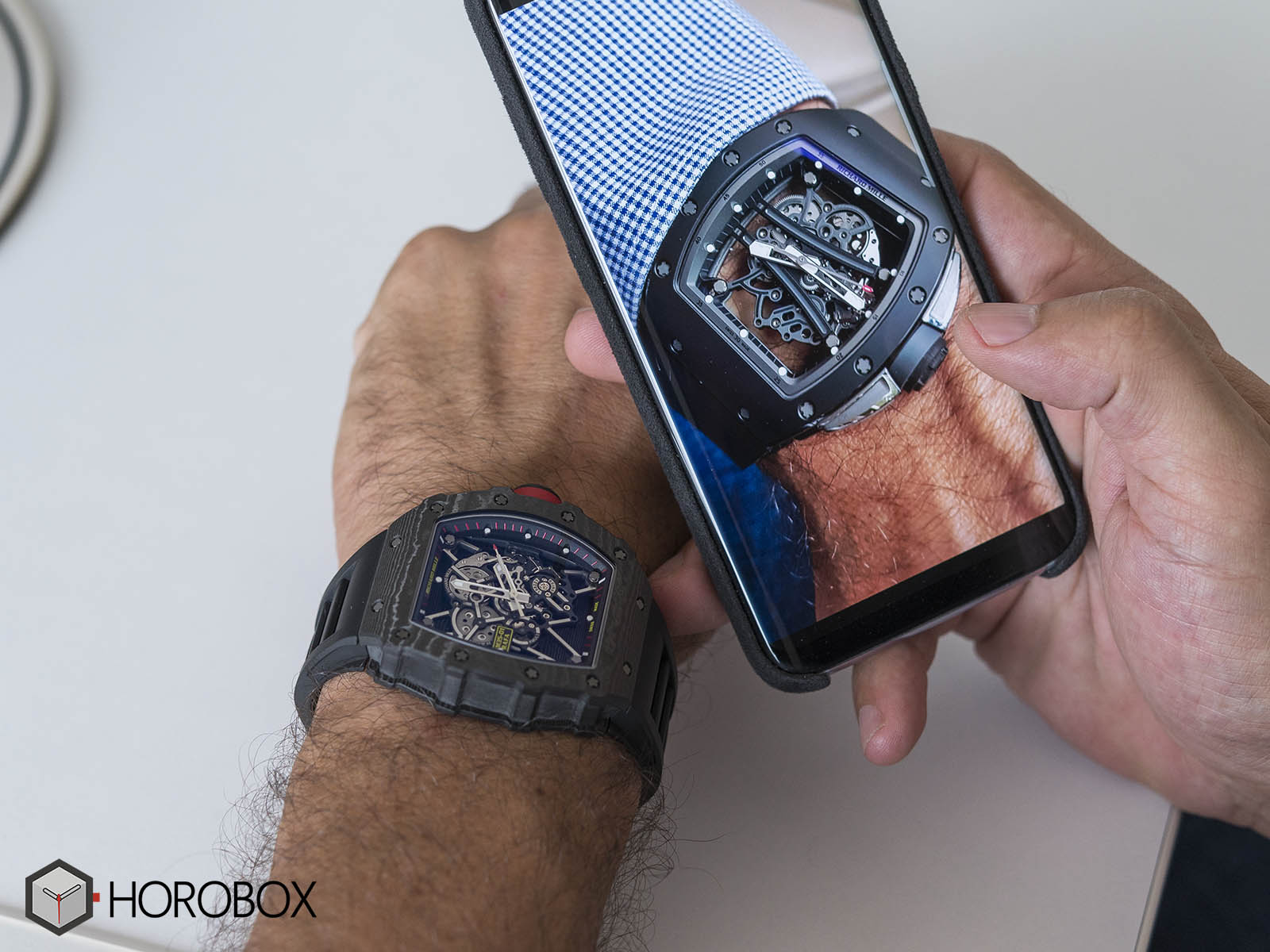 Of course, this success relies on many factors. The signature Tonneau shaped case and the extreme materials are only two of them. And there are the brand ambassadors... They are more like “all star celebrities”. 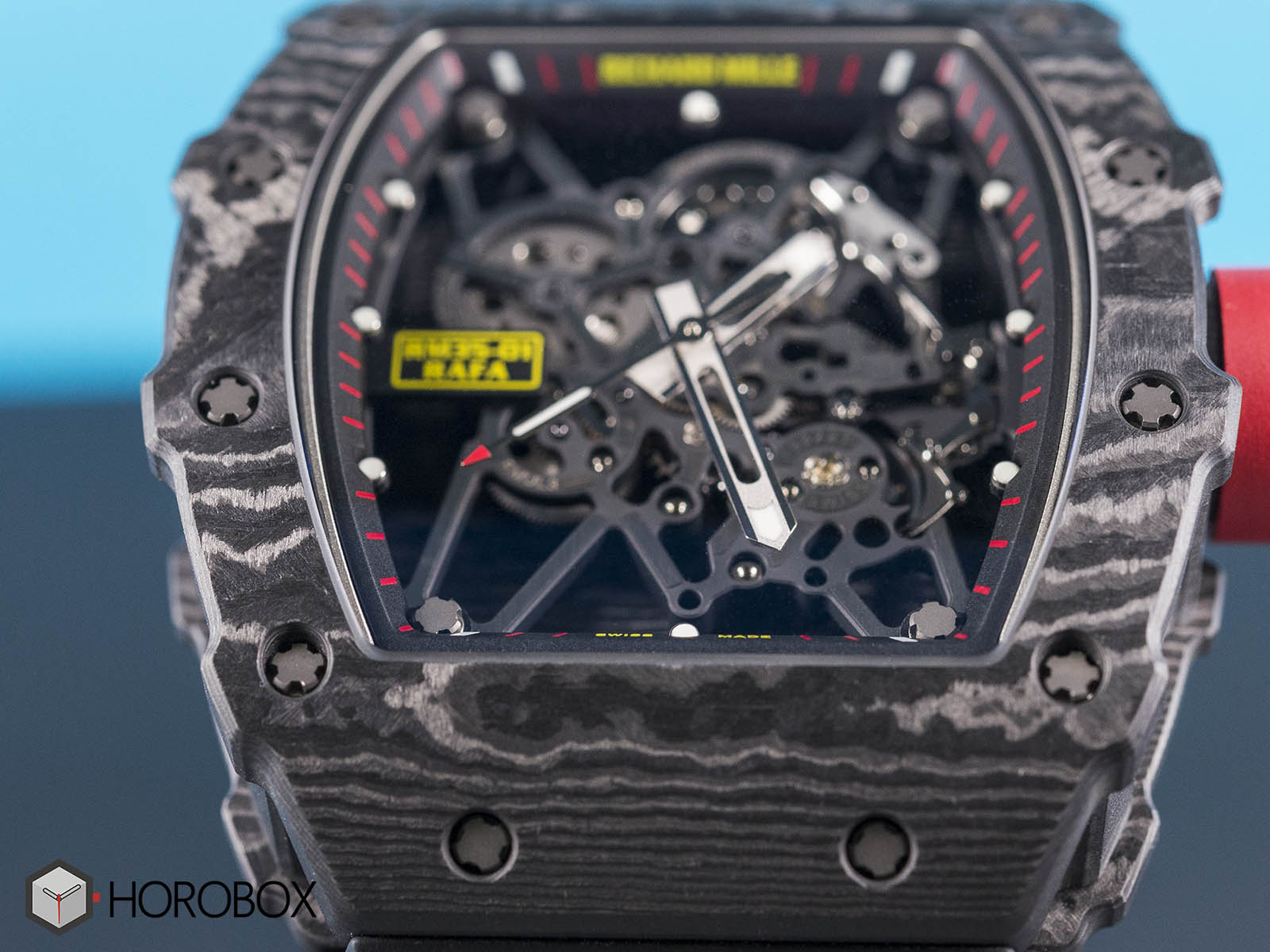 Richard Mille and Rafael Nadal have been working together for many years. The RN27 series designed for the famous tennis player sets the limits of the "haute horlogerie" with their Tourbillon movements, the RM 35 series is born, as an answer to the clients’ demands, produced with the same cutting edge technologies but without the complications. The RM27 series is now in its fourth version while the RM 35 series has two different case options and three models with a couple of movements.

RM 35-01 is offered in a Tonneau shaped case measuring 49.94mm x 42mm x 14.05mm.In fact it is unlikely to have an idea of ??Richard Mille by just looking at the measurements because the case geometry is much different than the usual watches. Obviously, I have to say that I’m facing a more imposing watch than I expected. The perception created by this greatness is simply increases sportiness without making you feel uncomfortable. The most important factors affecting the wearing comfort are the design of the caseback and the lightness of the watch. 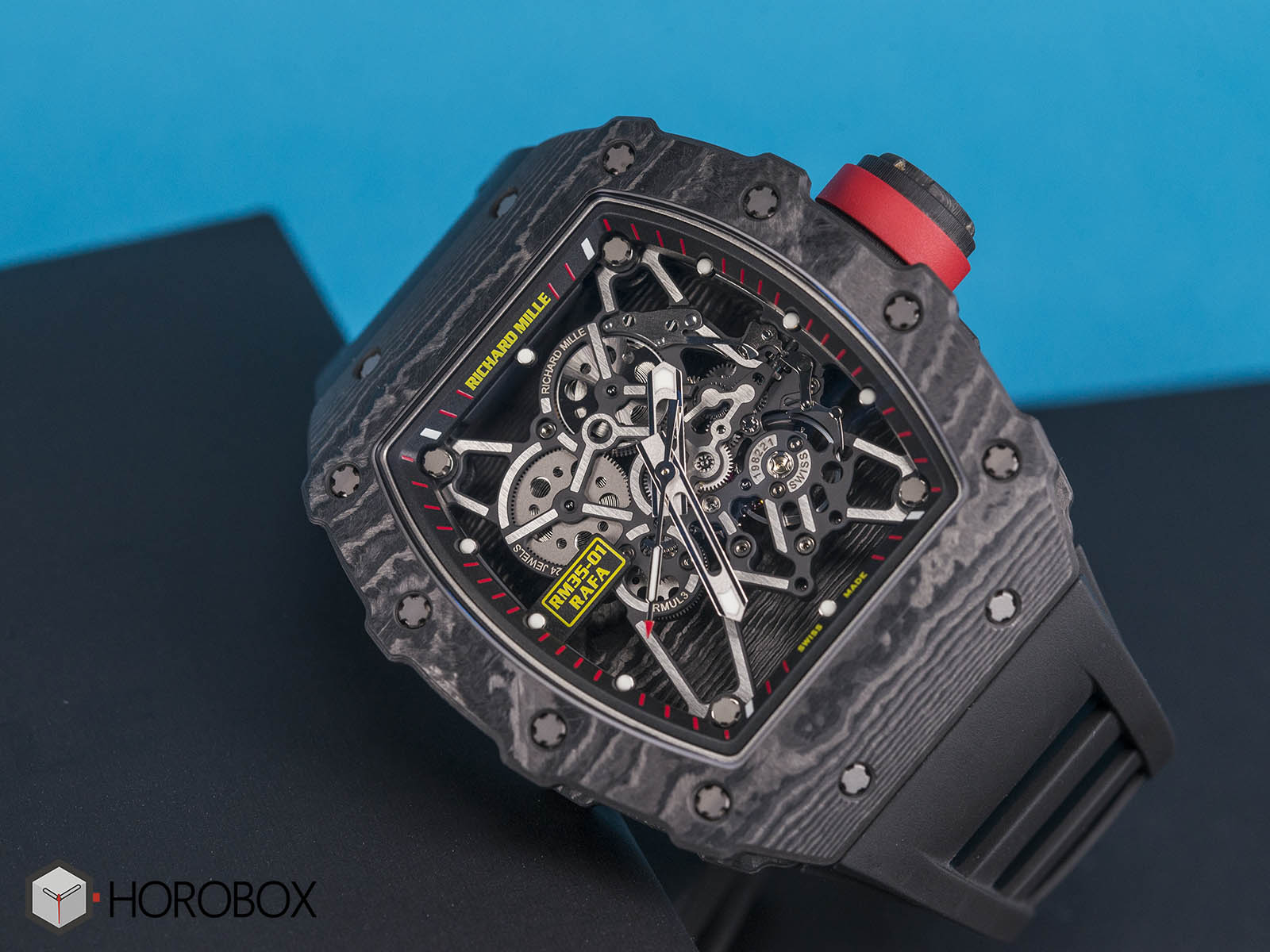 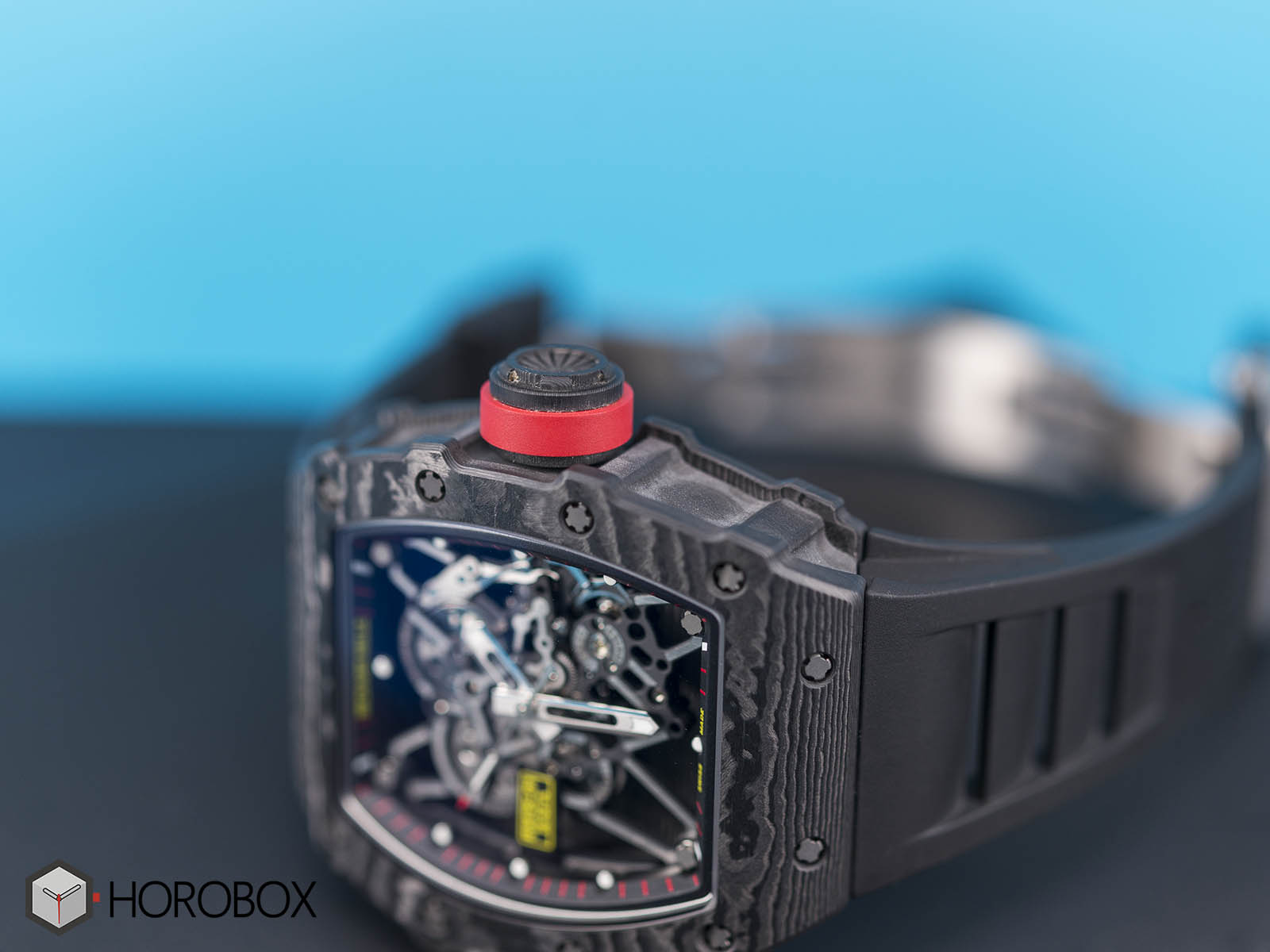 The model’s case is made of NTPT® carbon which is patented to the brand. A large number of carbon fibers with a maximum thickness of 30 micrometers are placed on top of each other at a 45 degree angle and then baked at a pressure of 6 atmospheres and at a temperature of 120 degrees Celsius and then shaped on CNC milling machines. According to Richard Mille, NTPT has 25% more fracture resistance and 200% higher micro crack resistance than carbon-like composite materials. A total of 20 titanium stud bolts and Nitrile O-ring seals are provided in the case to provide water resistance of 50 meters. While the front side of the watch is equipped with a sapphire crystal, a closed NTPT carbon caseback on the rear side is preferred. 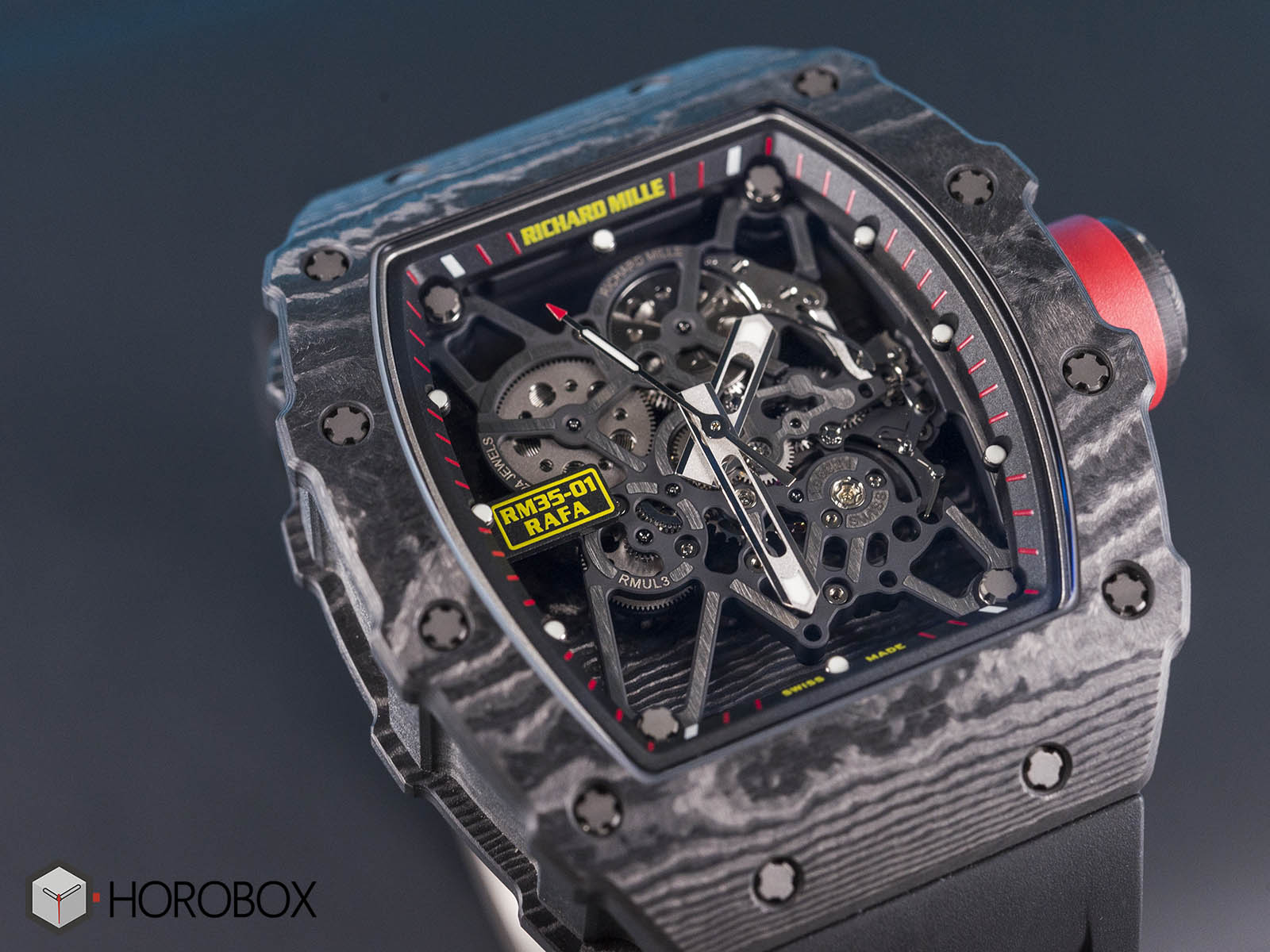 Richard Mille RM 35-01 is powered by the hand-wound Caliber Ref. RMUL-3 measuring 30.25mm x 28.45mm x 3.15mm. Unfortunately the ultra-thin structure of the movement is not reflected to the case, but it is a great pleasure to watch the skeletonized caliber from the dial. 24 jewels movement beats at 28800vph and offers 55 hours of power reserve when fully wound. Winding the watch is a joy on its own. 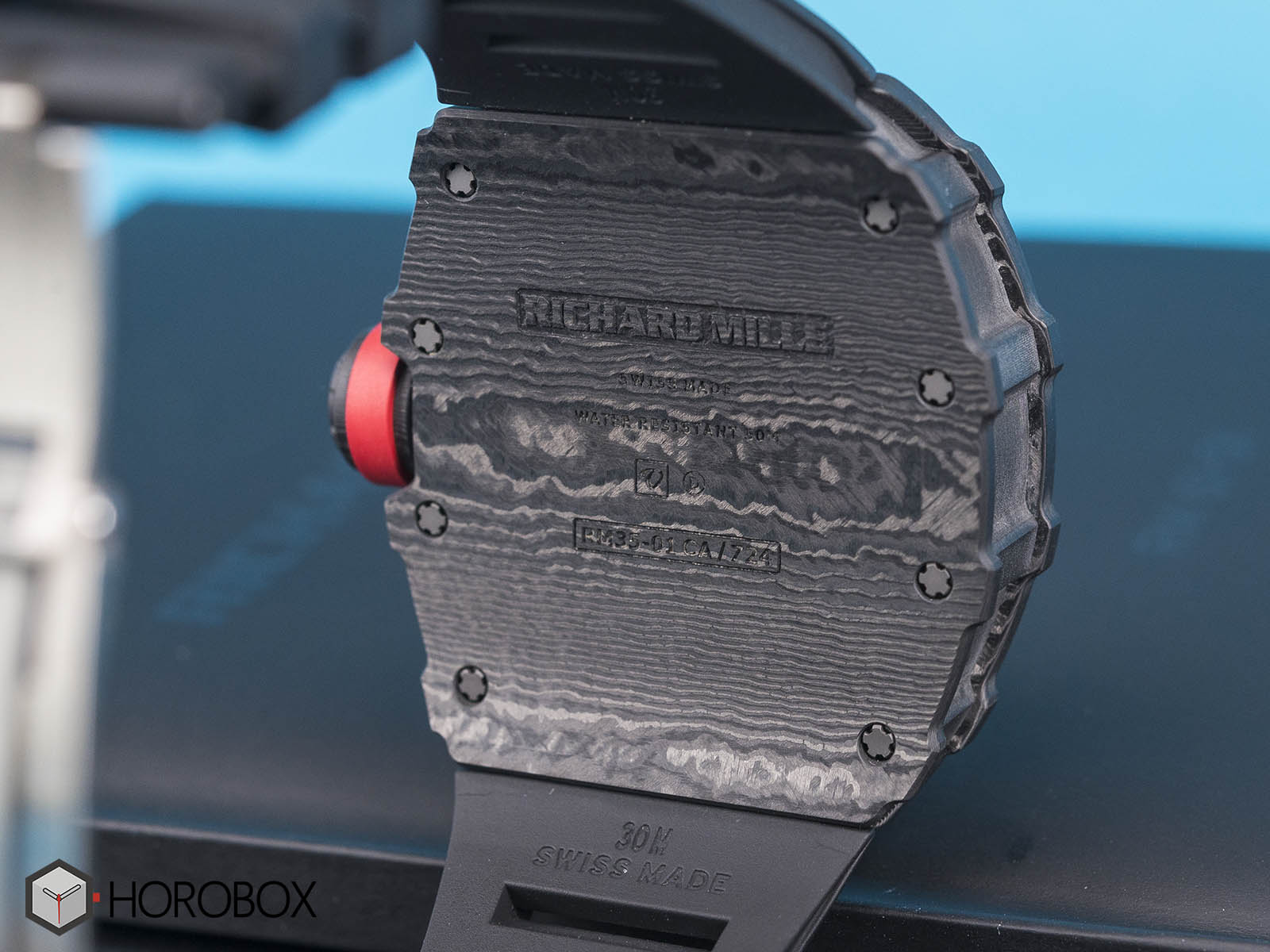 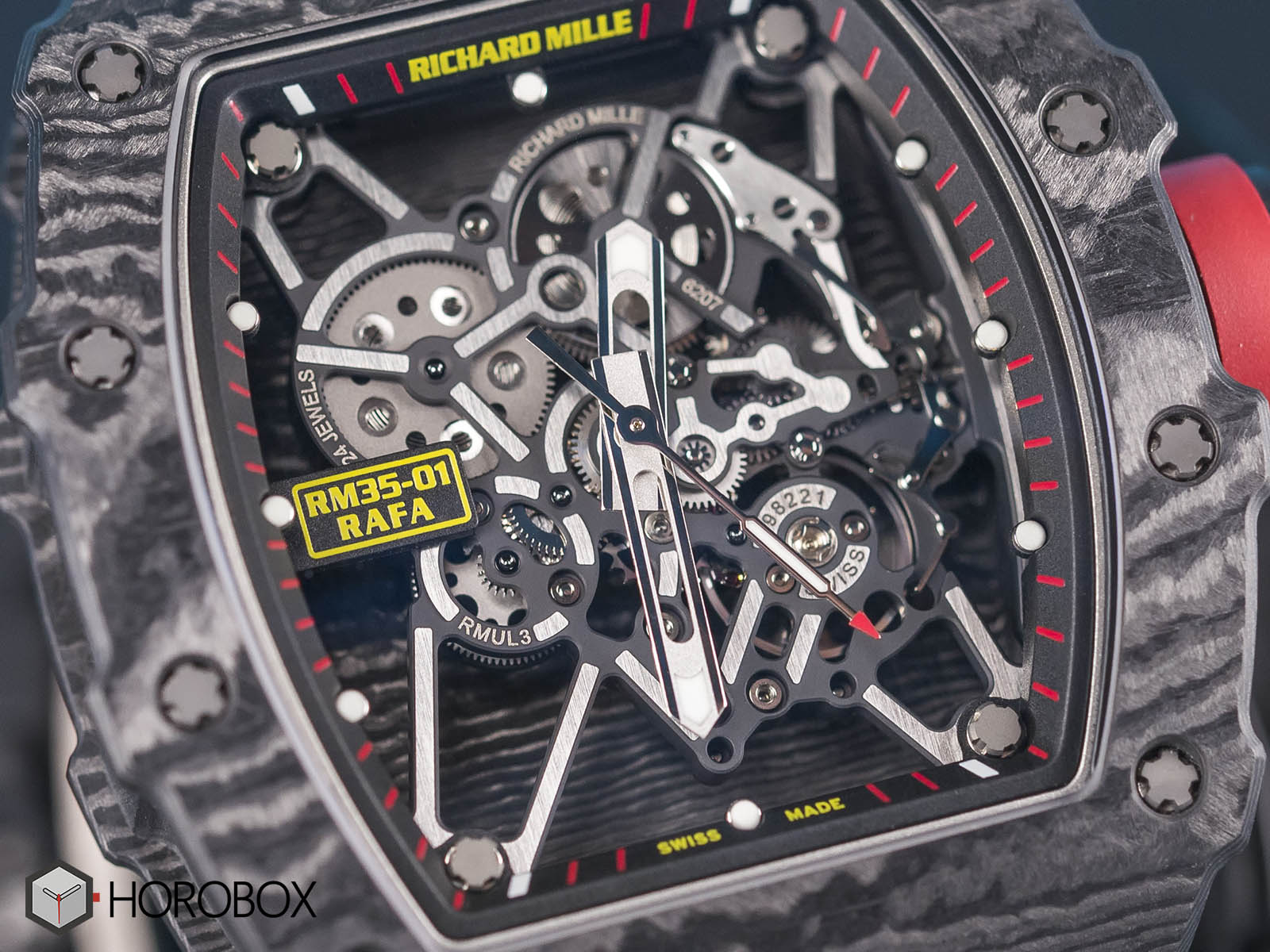 The beautiful presentation box contains two different straps. There is a rubber strap secured by the titanium folding clasp and a Velcro strap made of Kevlar. Strapping such an expensive timepiece to your wrist with a simple Velcro band is meaningful yet sporty. 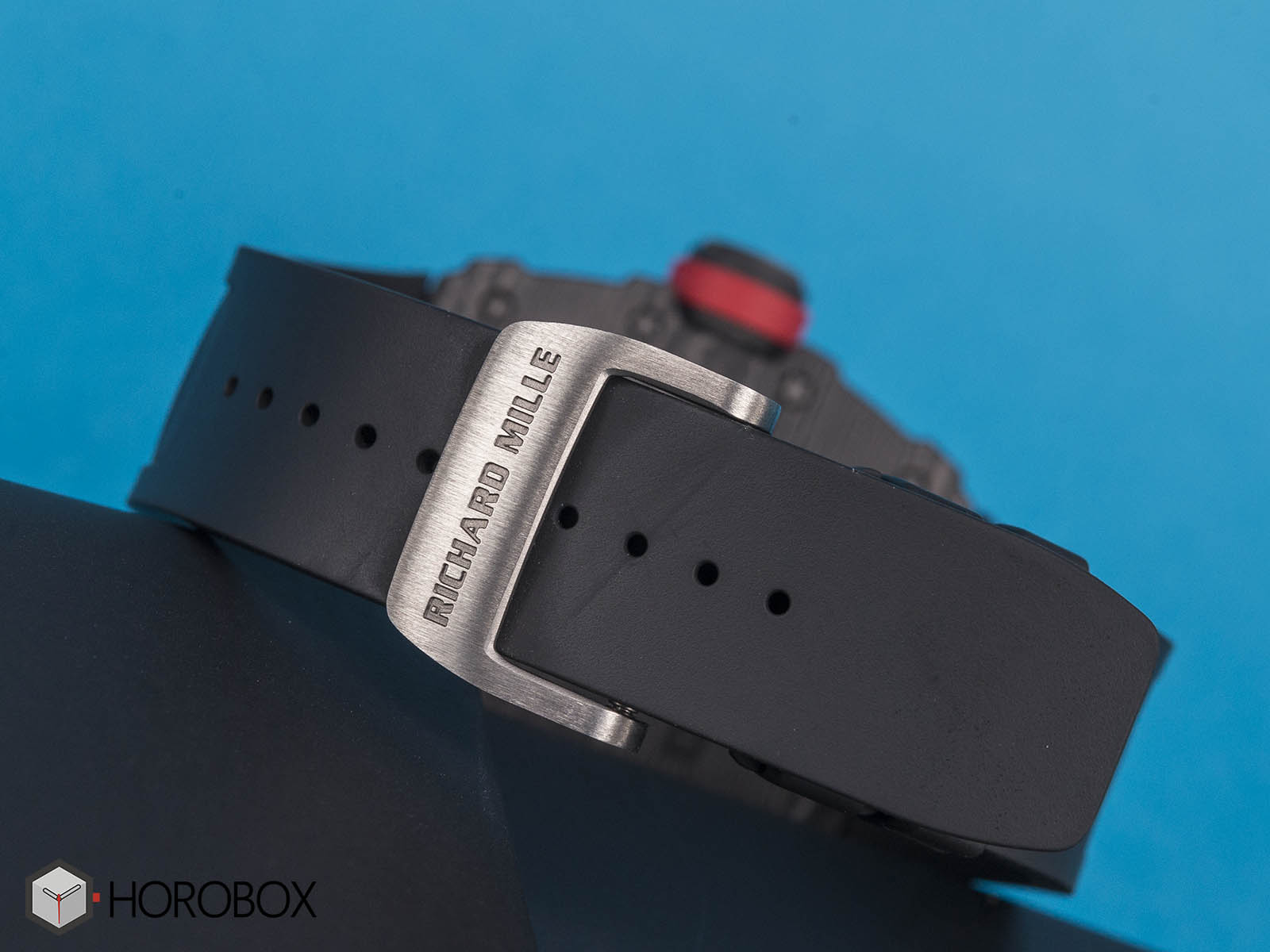 Well, how does this all make me feel when I actually put the watch on? The first thing I feel is the extreme build quality, despite the lightweight. Generally, tight connections, low-tolerance advanced production technologies, often added weight by precious metals and many other reasons determine the quality of a watch. Richard Mille plays games to my brain with its frame breaking structure and proves that lightness can also reinforce the perception of quality. NTPT carbon spoils the user with an unusual feeling and image. The movement, which is solely an art piece with so many finer details, makes you wonder about the movements with complications considering the ones without them come like this. 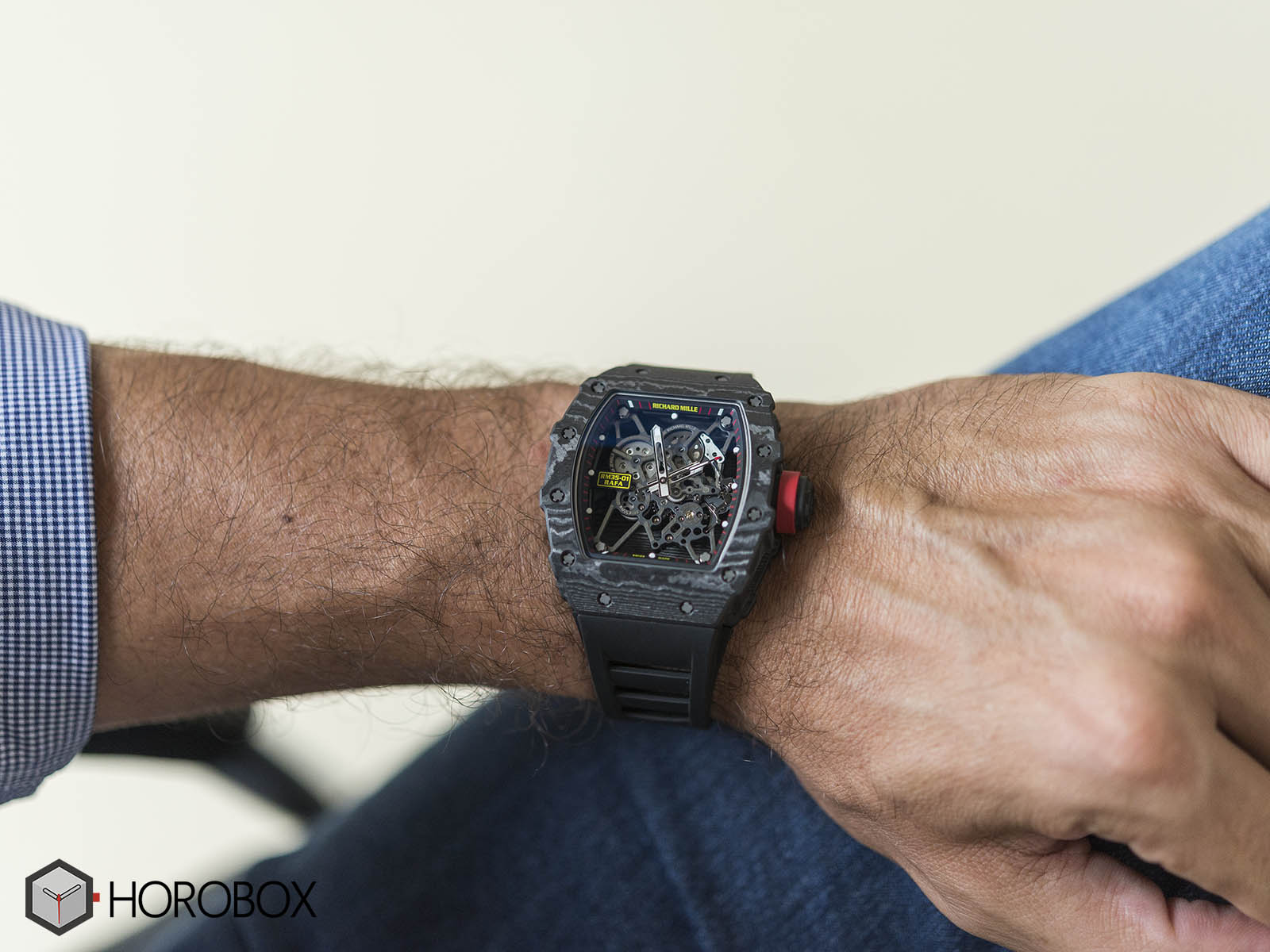 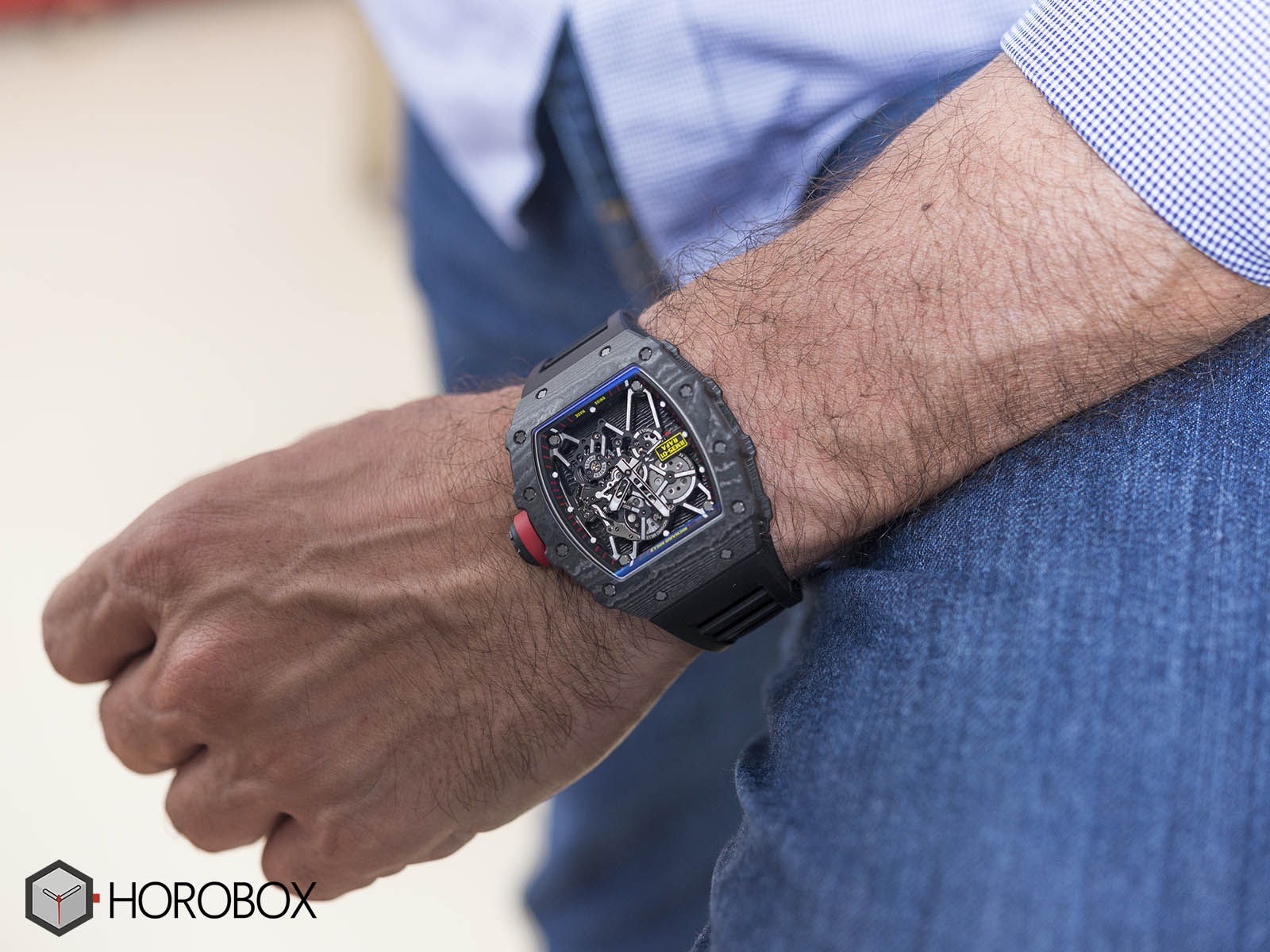 And all those specifications come with a price tag of over 100,000 Euro. RM 35-01 is not a limited edition timepiece but don’t get excited too soon as it’s still quite hard to get one due to the high demand. In the meantime, let me tell you that there is also another version of the same watch with an automatic movement produced by the reference RM 35-02.