Roger Dubuis marked the SIHH 2016 mostly with its Velvet Collection which is designed exclusively for the ladies however, there is one “ for men “ breakout star among the novelties; notably the Roger Dubuis Excalibur Automatic Skeleton Carbon.

One of the leading boutique hi-end manufacturers of the Swiss Watch Industry, Roger Dubuis was highly appreciated with the model Excalibur Automatic Skeleton 42 which was launched during SIHH 2015. The model was an instant success for the brand not only for its cool looks and impeccable craftsmanship but with its relatively affordable price tag compared to the rest of the product line. The newly added Carbon version seems to be following the footsteps of its previous version. 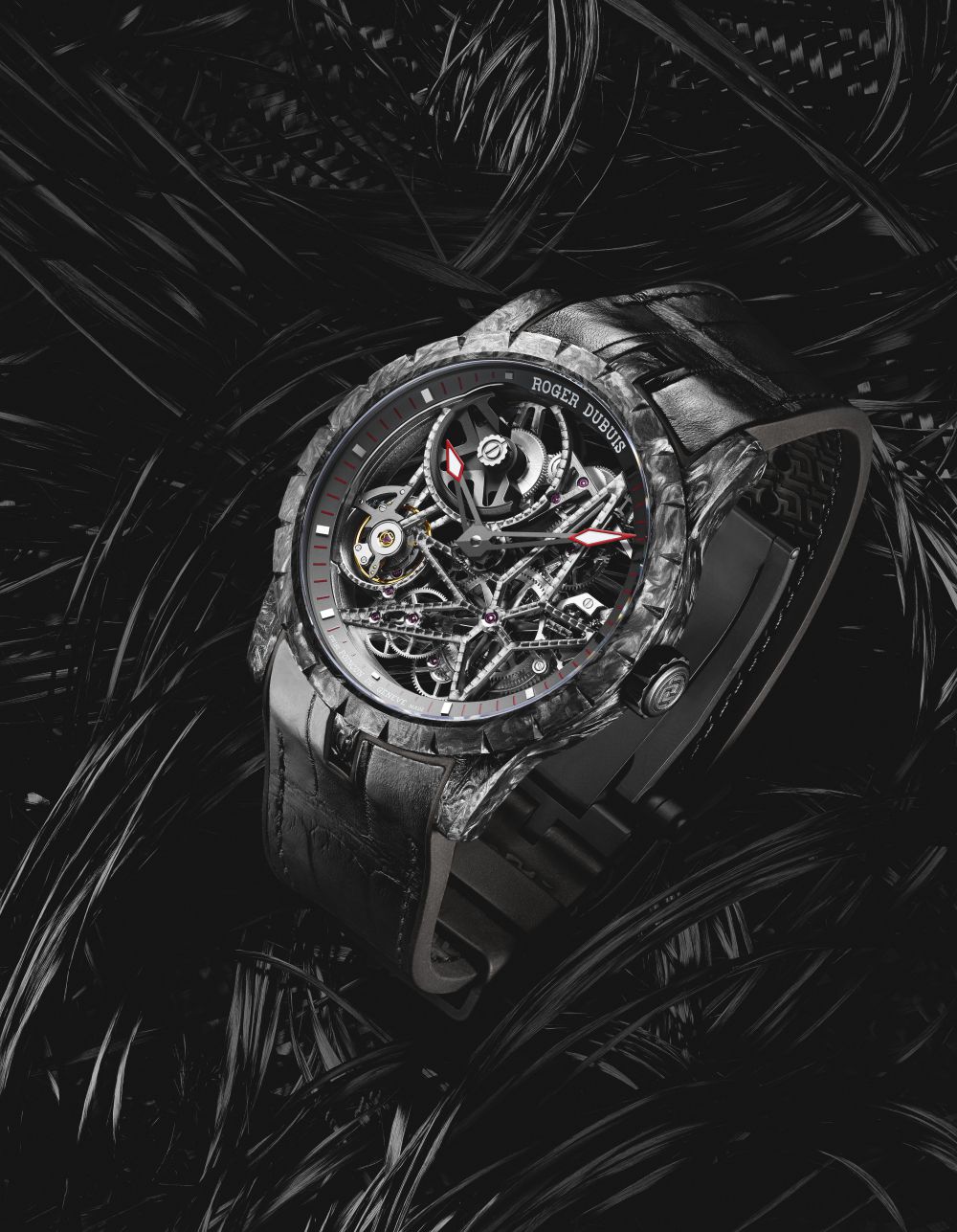 Besides the general appreciation from the watch enthusiast, the Excalibur Automatic Skeleton Collection has a special meaning for the brand as it is the first timepiece offering the cult skeleton concept of Roger Dubuis without the Tourbillion feature. Well, this explains the “ relatively affordable price tag “ part as this new collection was quite a success especially among the watch aficionados which were willing to sacrifice the Tourbillion for the sake of having that unique skeleton Roger Dubuis for 60K USD roughly. 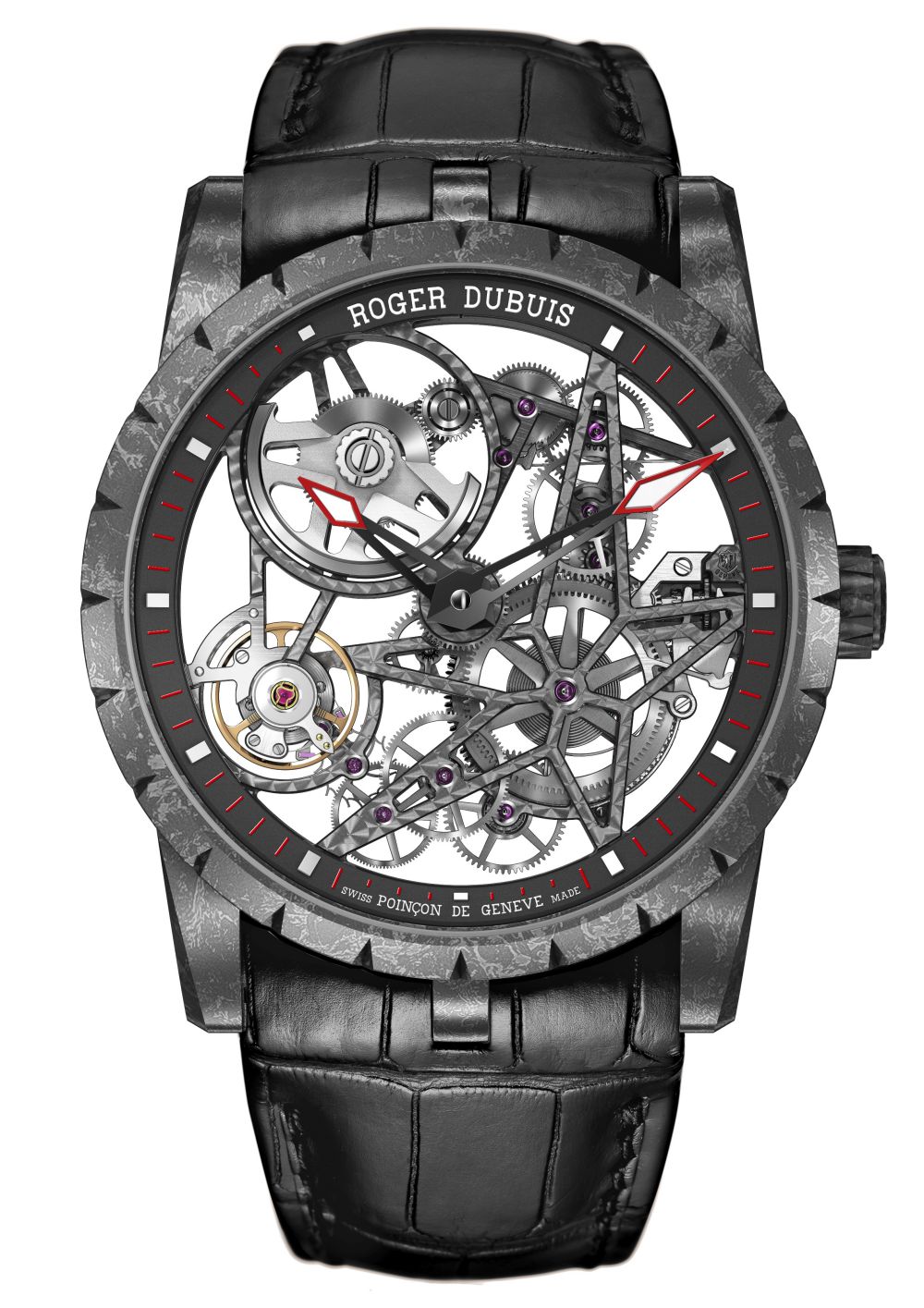 Roger Dubuis Excalibur Automatic Skeleton Carbon has many common features with its DLC coated titanium version launched in 2015. The model name on the other hand, now lacks the “42”. I believe it would be pretty comfortable to wear the new model -thanks to its carbon case- especially when compared with its 18K solid rose gold brother. In the meantime, let me remind you that this timepiece is the first Roger Dubuis model made of carbon. 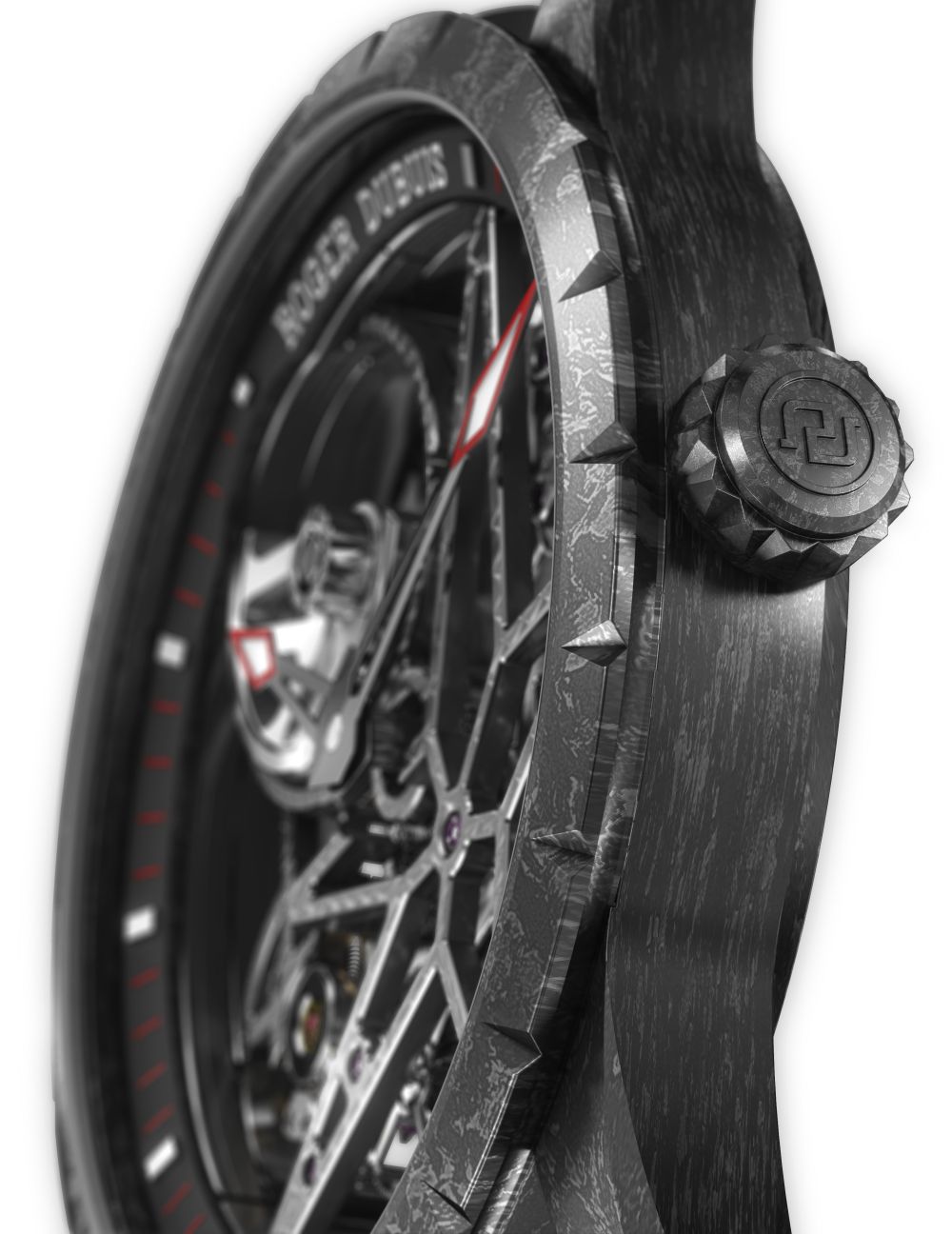 The carbon case has a 42mm diameter like the previous version. The timepiece sports a pretty bold wrist presence with its 12.14mm thickness and mostly black appearance. Possibly, the model will look a tad smaller when compared to its 18K rose gold version due to that black dominated color scheme. Though it’s not a real sports watch, WR30M rating is still very weak for the average daily use. 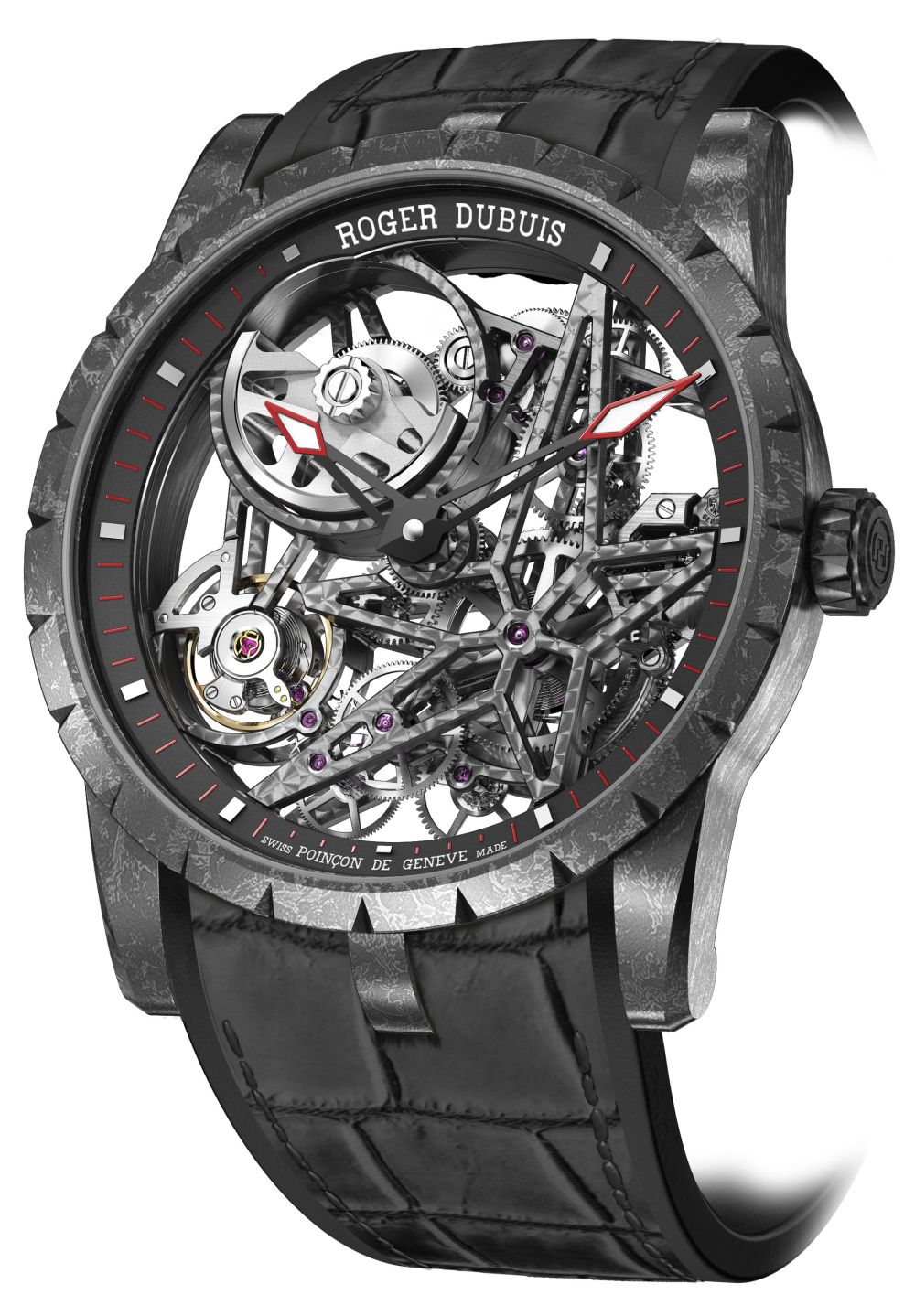 I think I would not be mistaken if I say there is no dial on the watch thanks to the skeleton style. There is a ring which houses the Roger Dubuis name along the hour and minute markers instead of a conventional dial. The ring is surrounded by the brand’s classic notched bezel. The red accents boost the sporty look beautifully and the natural look of carbon gives a nice touch of classiness.

Roger Dubuis Excalibur Automatic Skeleton Carbon ( Ref. RDDBEX0508 ) is powered with the brand’s in-house movement Roger Dubuis Caliber RD820SQ. The skeleton style movement, which is based on the Caliber RD820 first launched in 2005, beats at 28800vph and offers a power reserve of 60h when fully wound. The movement, which can be seen through the double sapphire crystals, is made of 167 individual parts and marked by Geneva Seal. 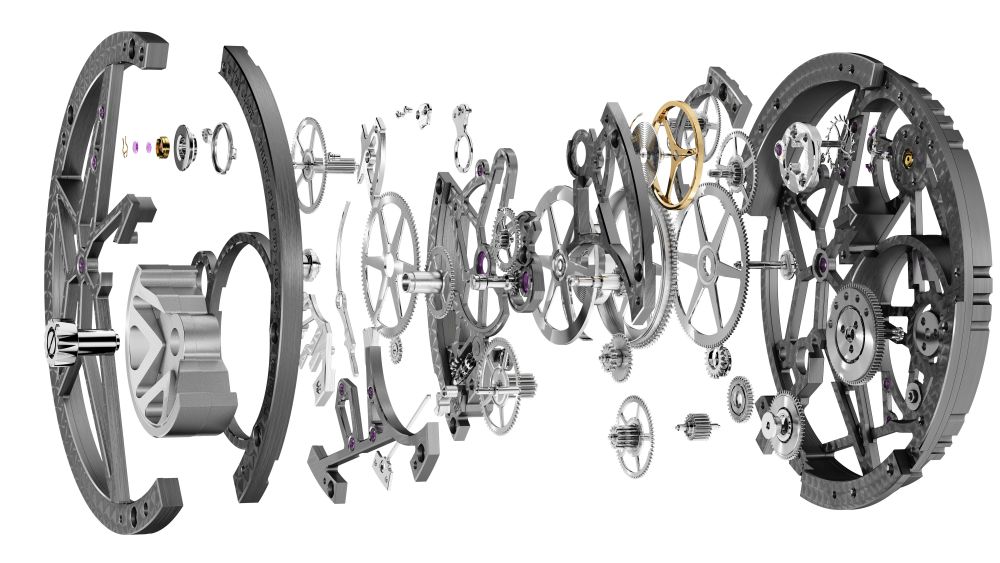 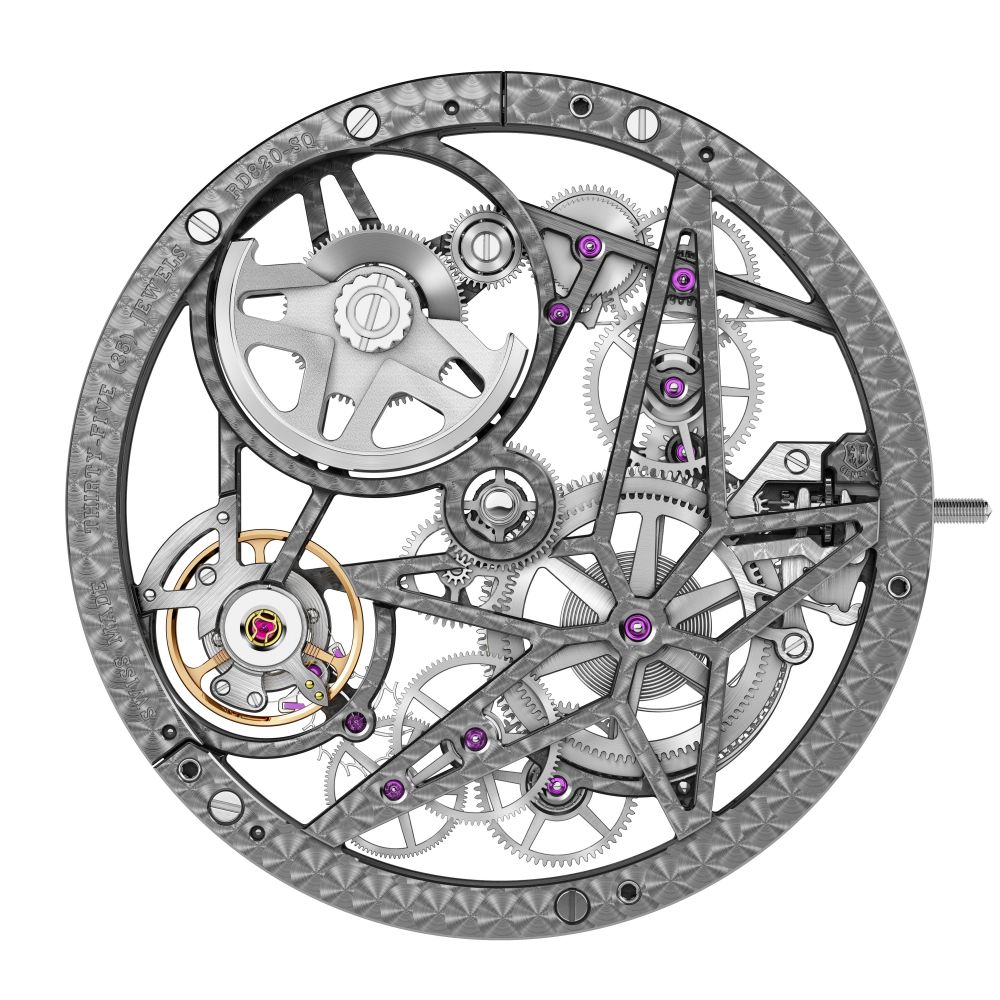 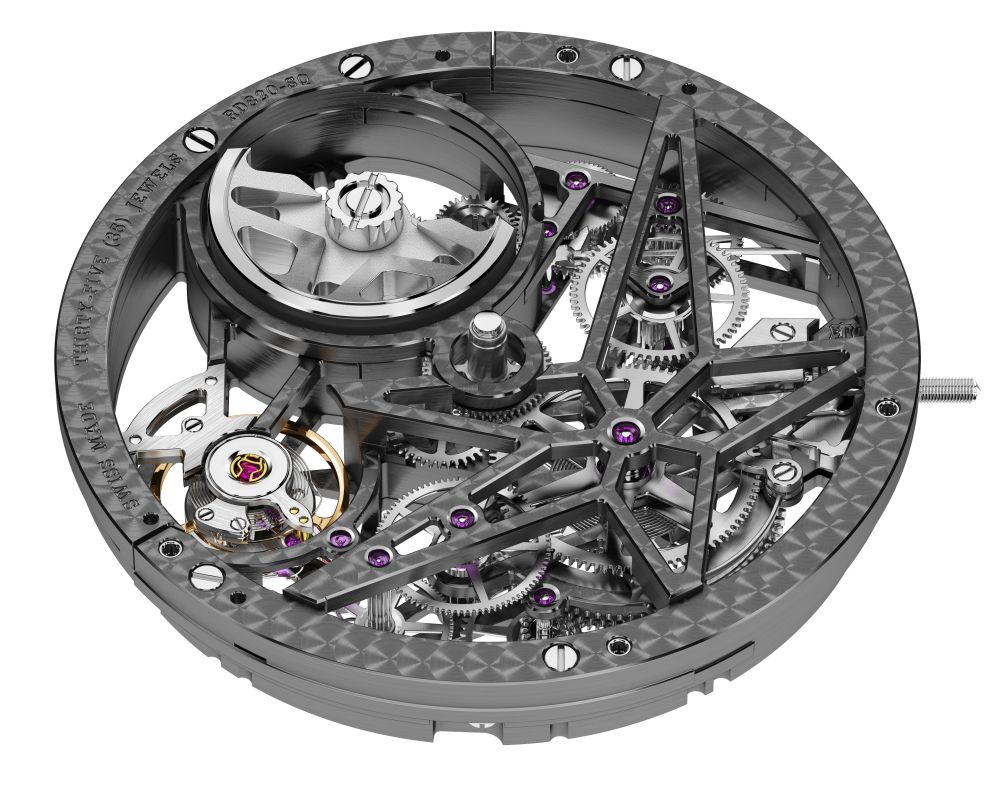 The timepiece is offered on a black crocodile strap which fits nicely with the rest of the overall design. The strap is secured by the classic Roger Dubuis folding clasp made of black DLC coated titanium.

As I mentioned at the beginning of my article, Roger Dubuis Excalibur Automatic Skeleton Carbon comes with a relatively affordable price tag. Its 63.100 USD MSRP is slightly lower than the DLC coated titanium version making it the entry model of the Excalibur Automatic Skeleton Collection. I strongly suggest this watch to the enthusiasts who are looking to get a piece of iconic Roger Dubuis Skeleton design without paying the remarkable extra asked for the Tourbillion feature.