In the 1950’s the improving aeronautical technologies allowed planes to fly longer distances, crossing different timezones. Suddenly pilots were in need of a timing instrument, that was able to tell the local time across the different destinations.

Pan American World Airways, PANAM the legendary airway company requested Rolex to design a watch for pilots that enabled them to easily tell the time wherever they fly. The Rolex GMT master was born. 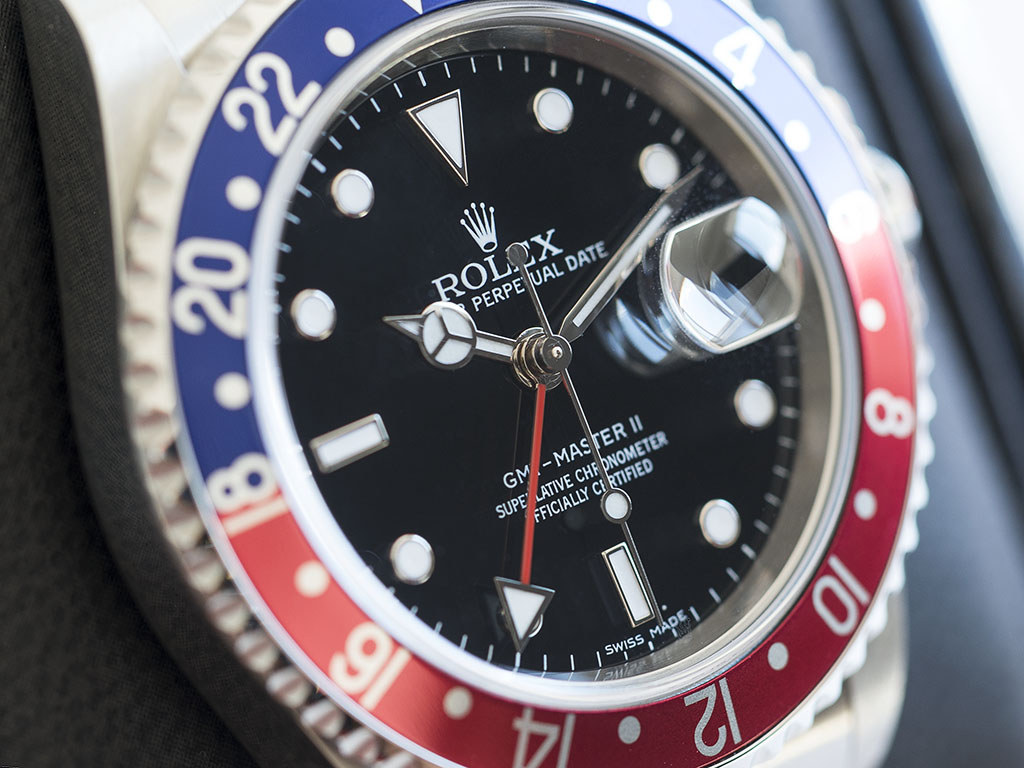 The first GMT master was manufactured in 1954 and was in fact a modified version of a Turno-O-Graph. This first version of Rolex’s pilots watch featured the iconic extra GMT hand that makes a full rotation every 24 hours.

This combined with the 24 hour marking around the bezel made it possible to indicate the local time all around the globe.

Ever since the GMT master has become a true legend not only for pilots, but for all lovers of watches.

One of the most characteristic features of the watch were the contrasting colors on the bezel, which served as day and night indicators, when used together with the GMT hand. 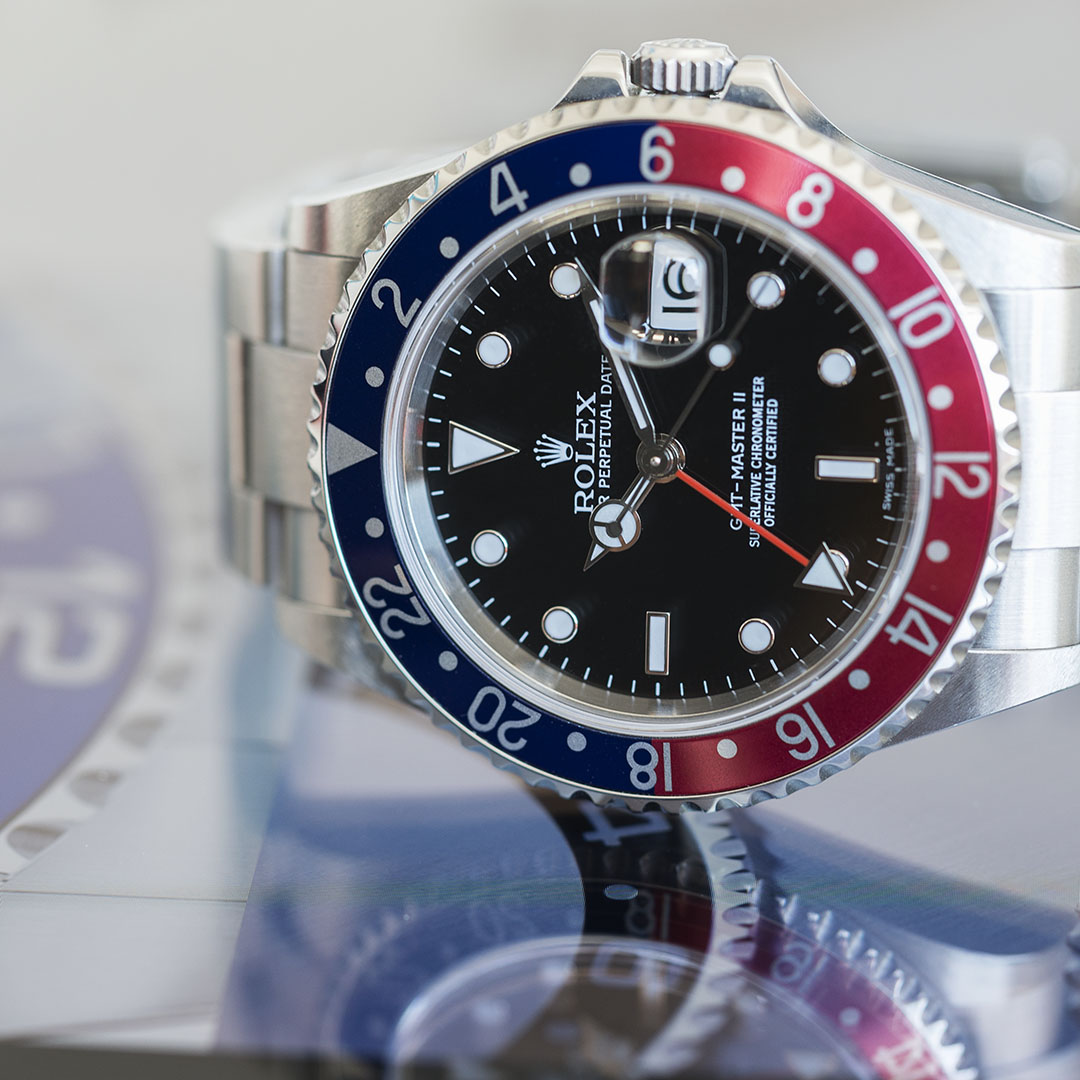 Collectors gave names to the different versions, such as “Pepsi bezel“ for the blue and red combination, or “Coke bezel“ for the black and red ones. Some models were also featuring brown and gold color, and some came in black or (only a few!) in blue.

For the 50th anniversary Rolex introduced some major changes with their 116718 reference. The entirely gold anniversary model features a beautiful green dial and a black patented cerachrome bezel.

Two years later the steel version with the same black bezel was introduced, but collectors were still eagerly waiting for a more exciting color combination. 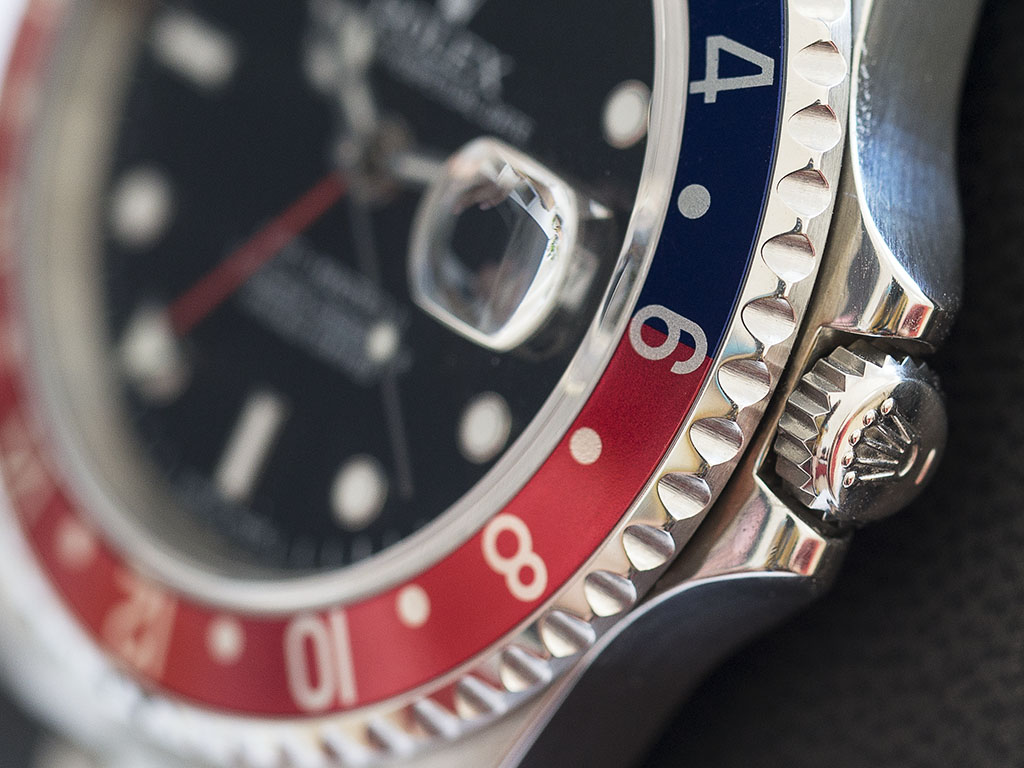 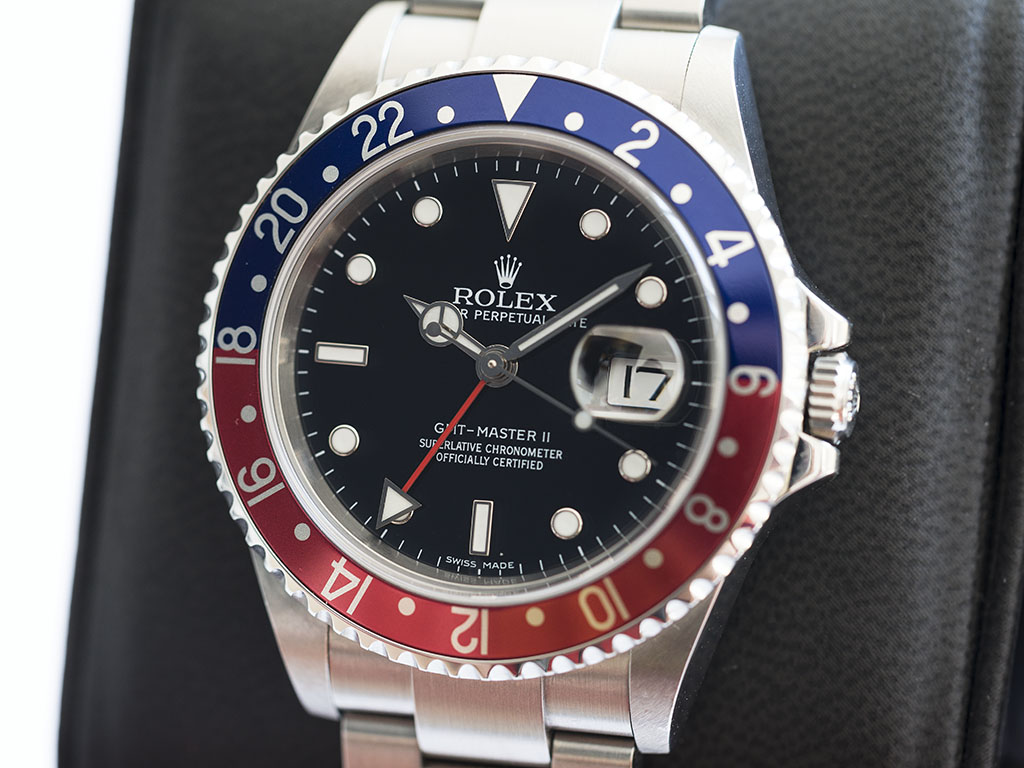 As Rolex was using a completely new, patented material called cerachrome (an extremely durable alloy of ceramic) for the bezel, there was still some time (and R&D) needed to be able to give this it some color.

It was during 2013’s Baselworld that Rolex introduced the black and blue bezeled 116710BLNR GMT Master among their novelties. This steel version evoked a lot of excitement, but everybody was still waiting for the “Pepsi“ to return.

Next year, in 2014 the big moment finally arrived and Rolex fired the big guns, the new model was finally featuring the iconic blue and red colors.

This can truly be considered as a technological breakthrough, as coloring the special ceramic alloy was impossible before. The reactions to were somewhat dubious because of the white gold case and bracelet which made this watch a more expensive investment than expected.

Long story short this timepiece, passionately loved by so many is undeniably one of the most important ones ever produced, therefore we definitely needed to get our hands on it. 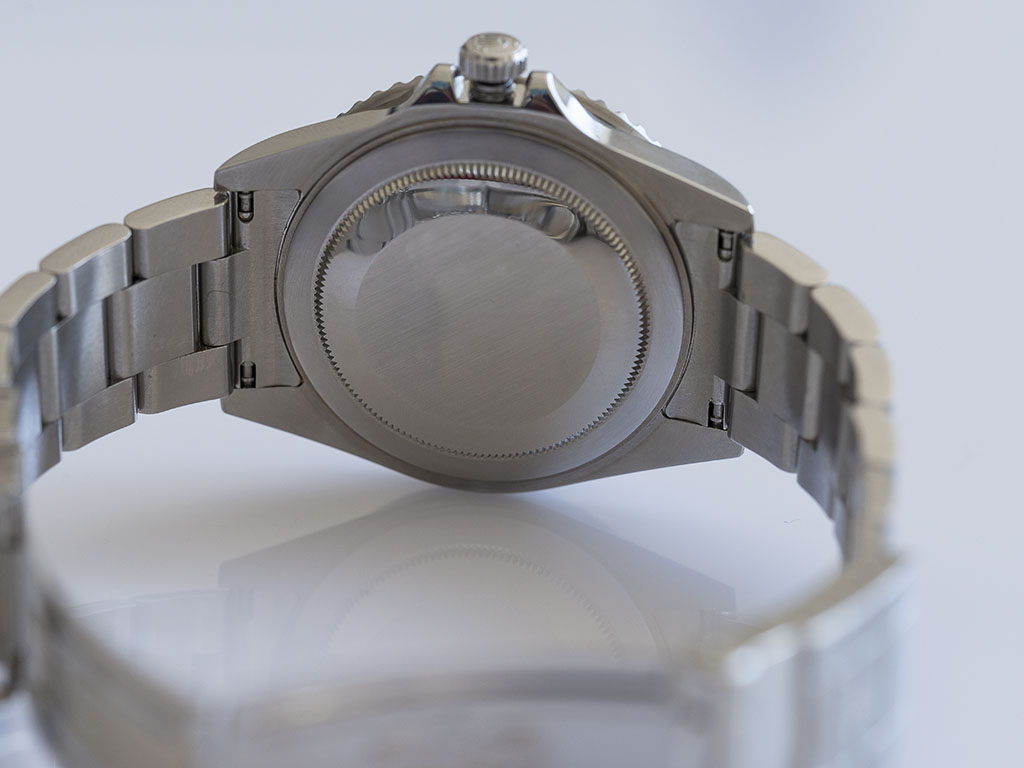 The case of the watch is made of 904L steel, and measures at 40mm. Despite sharing some measurements with the newly designed model, due to the thinner crown guards and bezel this one looks smaller on the wrist. 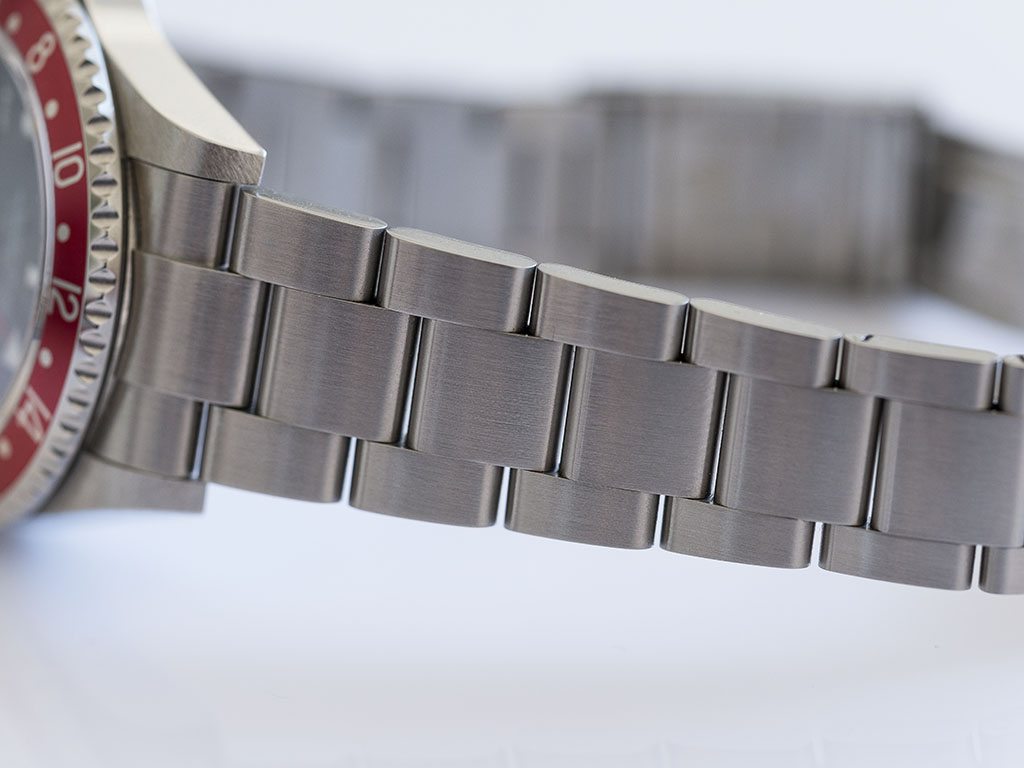 Compared to the 904L steel bracelet on the new models, old pieces feature bracelets made of  316L steel.

Older references are also sensibly lighter due to the different usage of steel. While the old model measures at 116g, the new one does so at 141g. We can say, that its lightness increases comfort on the wrist, but it might lack of the quality and toughness of the new GMT master.

Another recognizable difference is the clip mechanism on the bracelet. The new oyster bracelet features an indestructible clip, and serves our wrists as a worthy successor of the old clips.

Although the old ones have done a good job, visually it was time for an upgrade. The new bracelet clips have a creative extension mechanism built in, but the old perforated clips also have a smart and simple way of configuration.

Allow us to get to the most exciting part of this legendary watch, the bezel. 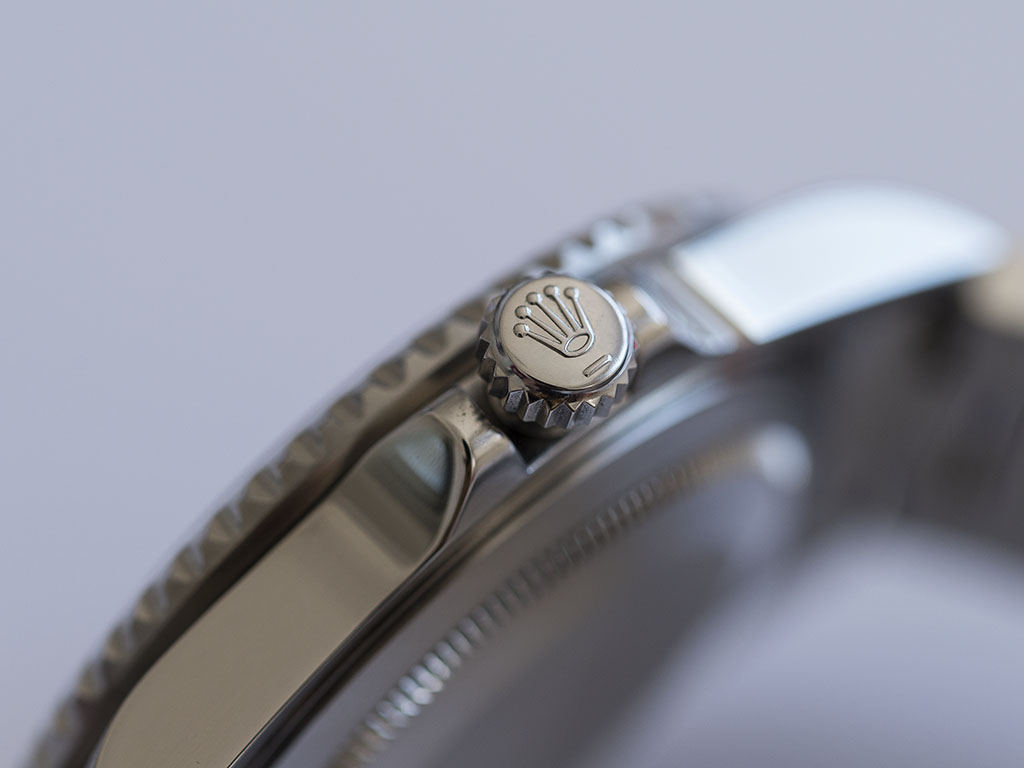 Despite the new cerachrome bezels being extremely durable and truly beautiful, there is something about the colors of the old models that we cannot keep our eyes of.

New bezels are bidirectional and can be rotated around in 24 positions, while the old ones rotate like Submariners or Sea-dwellers clicking 120 times wile making a full rotation.

Despite the old model featuring a twinlock crown compared to the triplock on the new one, both pieces share water resistance up to 100m/10 bar, which is more than enough for a (pilot’s) watch.

This piece in particular is equipped wit a sapphire crystal glass. It was in 1983 on the 16760 model that the use of plexiglass was left behind.

Until now the anti reflective coating under the lens of the 116710 has not caught our attention, but looking at the vintage model it actually makes a difference.

While the watch is luminous enough in the dark, compared to the new model’s almost flashlight like effect it looks rather like a candle’s light. 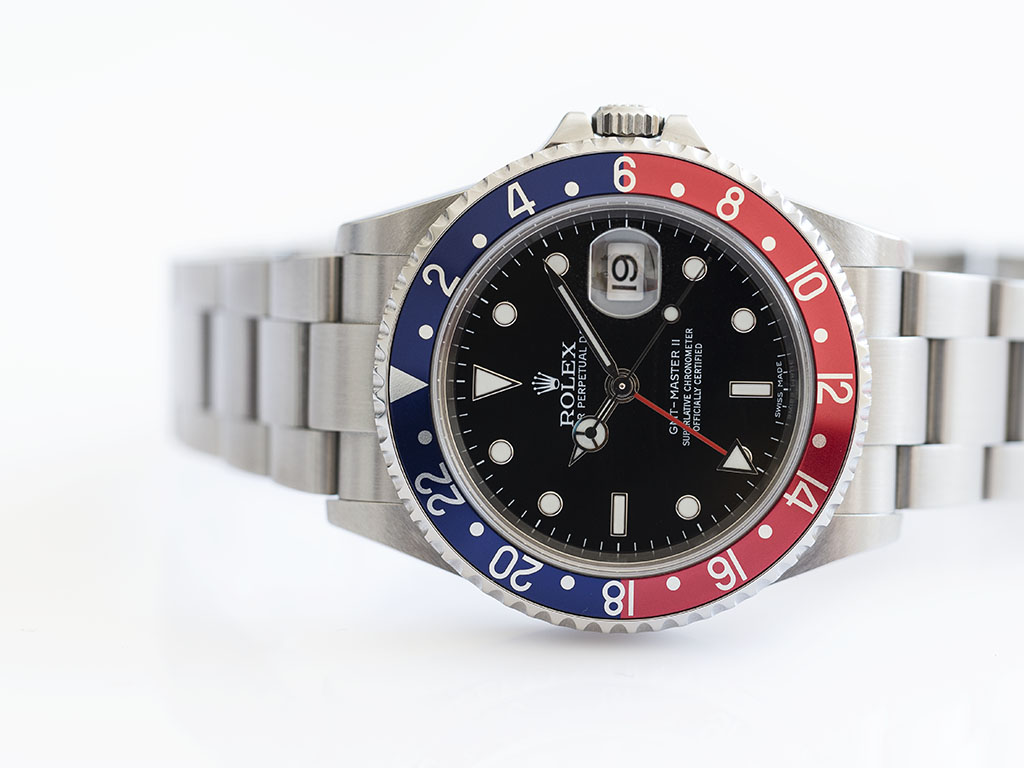 While normally the 16710 models were equipped with a 3185 movement, during the last 1,5 years of production Rolex changed to 3186 calibres.

This newer movement was already featuring a parachrom blue hairspring! When fully wound the watch offers two days of power reserve and is accurate to a remarkable 1 second deviation per day.

It is important to mention that the 3186 movement is very rare among the 16710 references. 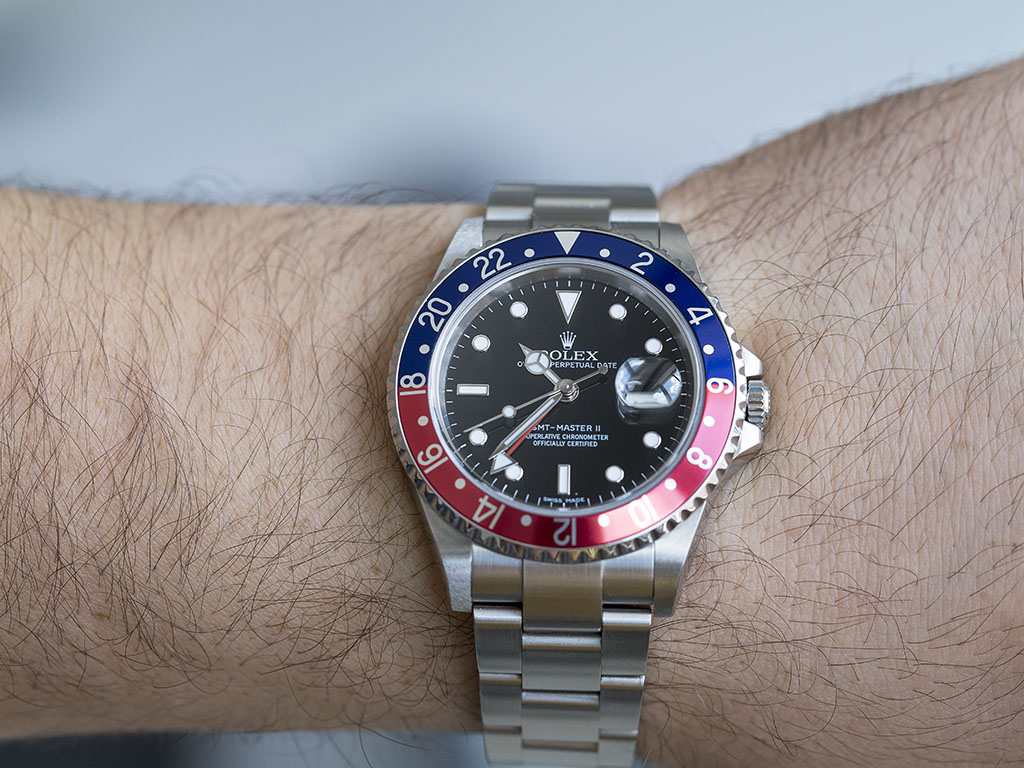 It is obvious that the old version gives the watch a much sportier look and the satin finished middle links in the bracelet only further enhance its active appeal. When comparing the two watches directly, the new version features undeniable improvement in the cases quality, durability, and robustness.

However we also think that the absence of a pepsi or coke bezel is hard to come by.

Just like everybody we truly love the good old funky bezel configurations and can only hope, that they will come in the future (a coke bezel would be nice).

As we are speaking about Rolex here, we cannot do anything else then wait and hope… but hey it usually works

We certainly recommend you take a look at one of the older reference of this legendary watch to get an idea of the DNA, that shapes the new and upcoming models.

Play around with them and enjoy what they can offer.