Travel To The Bronze Age With Panerai

Combining the Italian spirit with Swiss engineering, Panerai continues its show of strength with its seventh bronze case model.

Anyone who has devoted themselves to the seas and maritime knows the importance of bronze. Bronze, one of the most significant copper-based alloys, has become resistant and durable due to the tin and other metals it contains. These features have made bronze a symbol of progress during the era it was discovered, thanks to its ease of production and functionality. This alloy, which is used on a wide scale from diving helmets to ship equipment, has been in the service of humanity for centuries and continues to do so. Of course, in today's conditions, there are much lighter and stronger alloys than bronze, especially stainless steel. Fortunately, luxury watchmaking seeks not the best, but the most sentimental with the stories it offers. 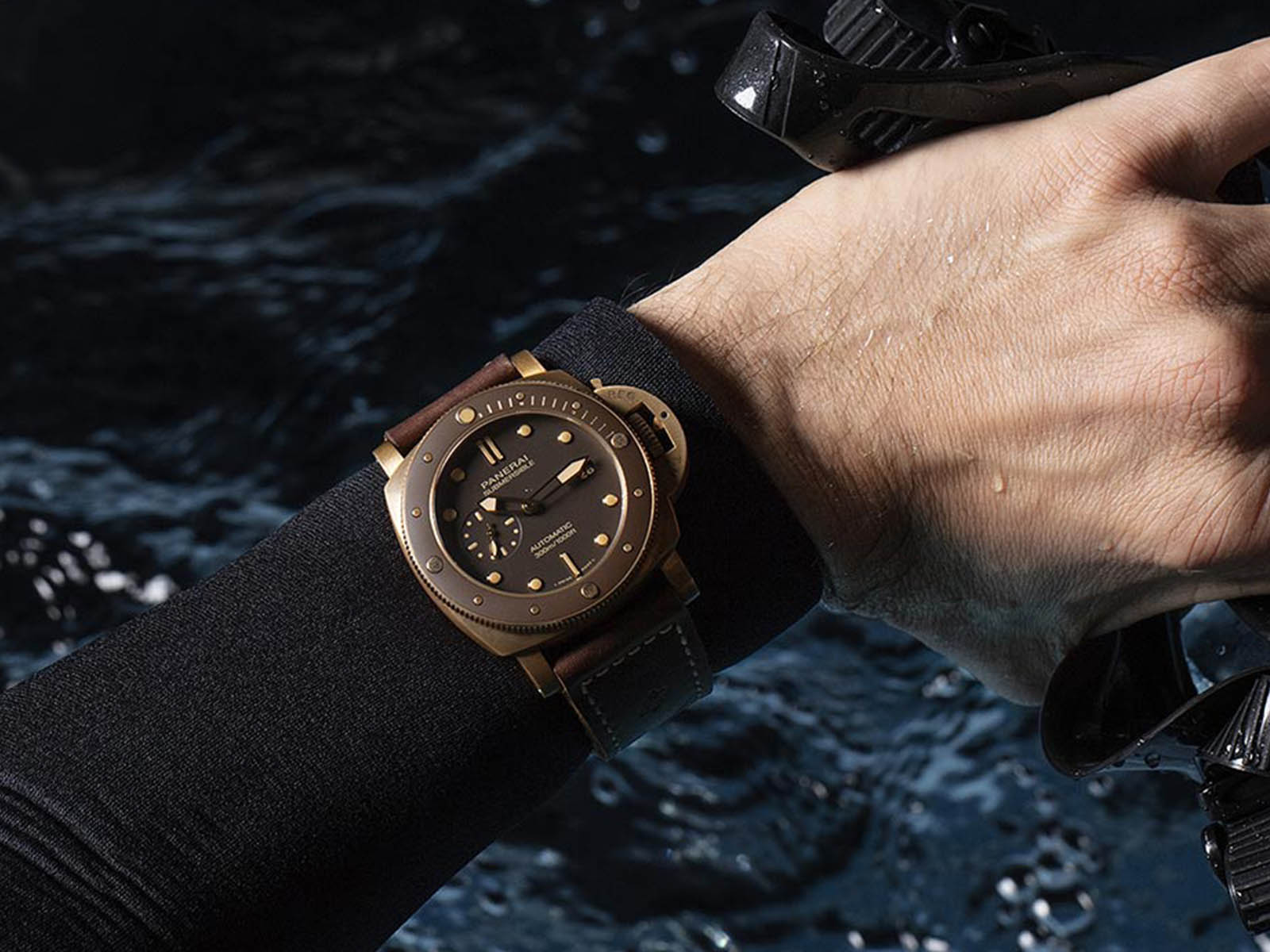 Taking action with this thought, Panerai came up with a great model in 2011. Based on the 47mm diameter Luminor Submersible 1950 (called simply Submersible in later years), the model was made of bronze and drew the attention of almost all watch lovers, not just Panerai enthusiasts, with its green dial. Equipped with the automatic Caliber P.9000 with a 3-day power reserve, only 1000 pieces were produced. 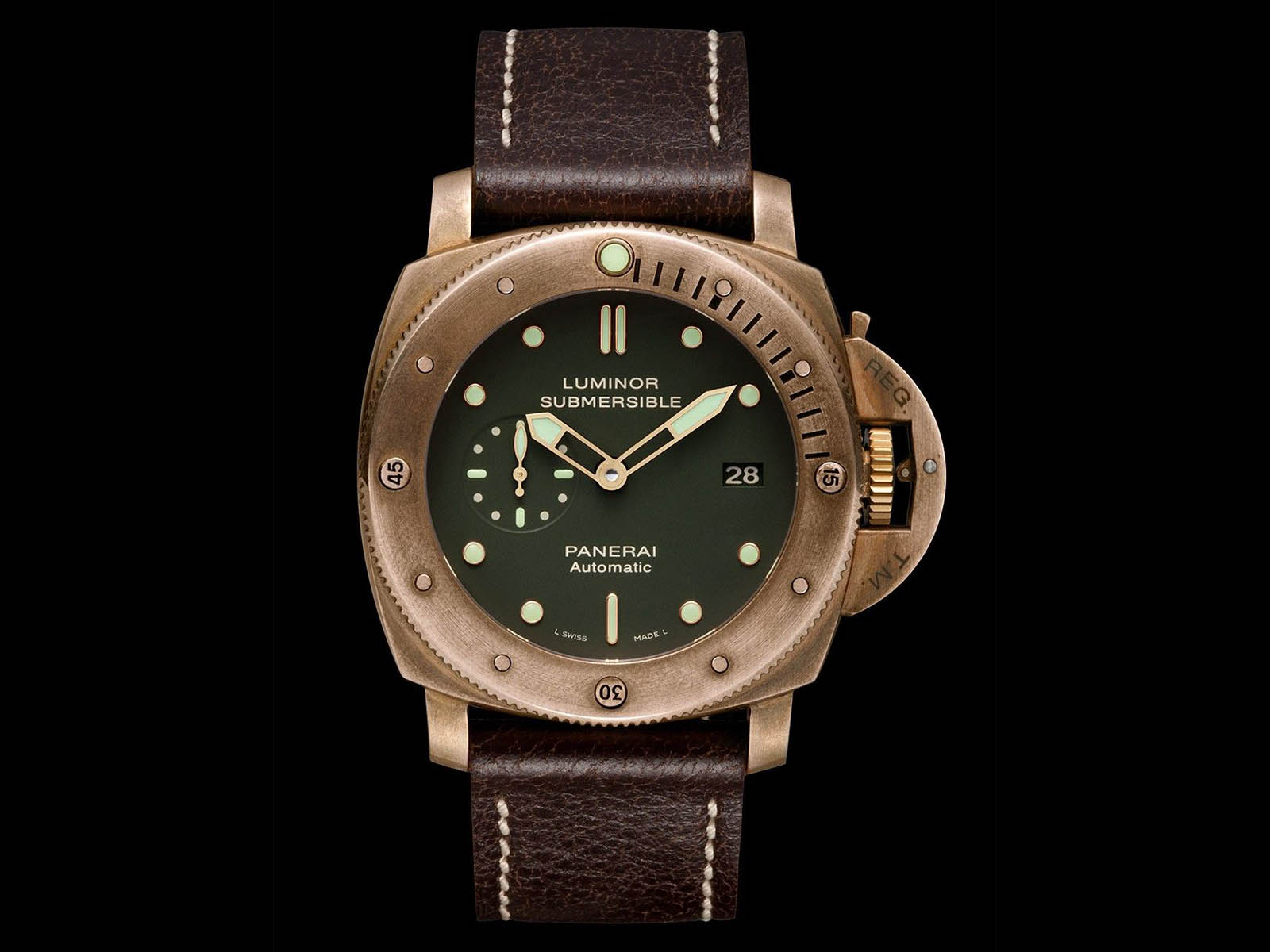 In those years, the legendary manager Angelo Bonati was at the helm of Panerai. Rumor has it that it was decided that the bronze Submersible watch with reference number PAM00382 would be the only bronze case watch in the collection and would not be produced again. This put the model in a unique place among all Panerai models. The lucky owners of the 382 model enthusiastically began to share the images of the rapidly oxidized bronze cases on social media and forums. 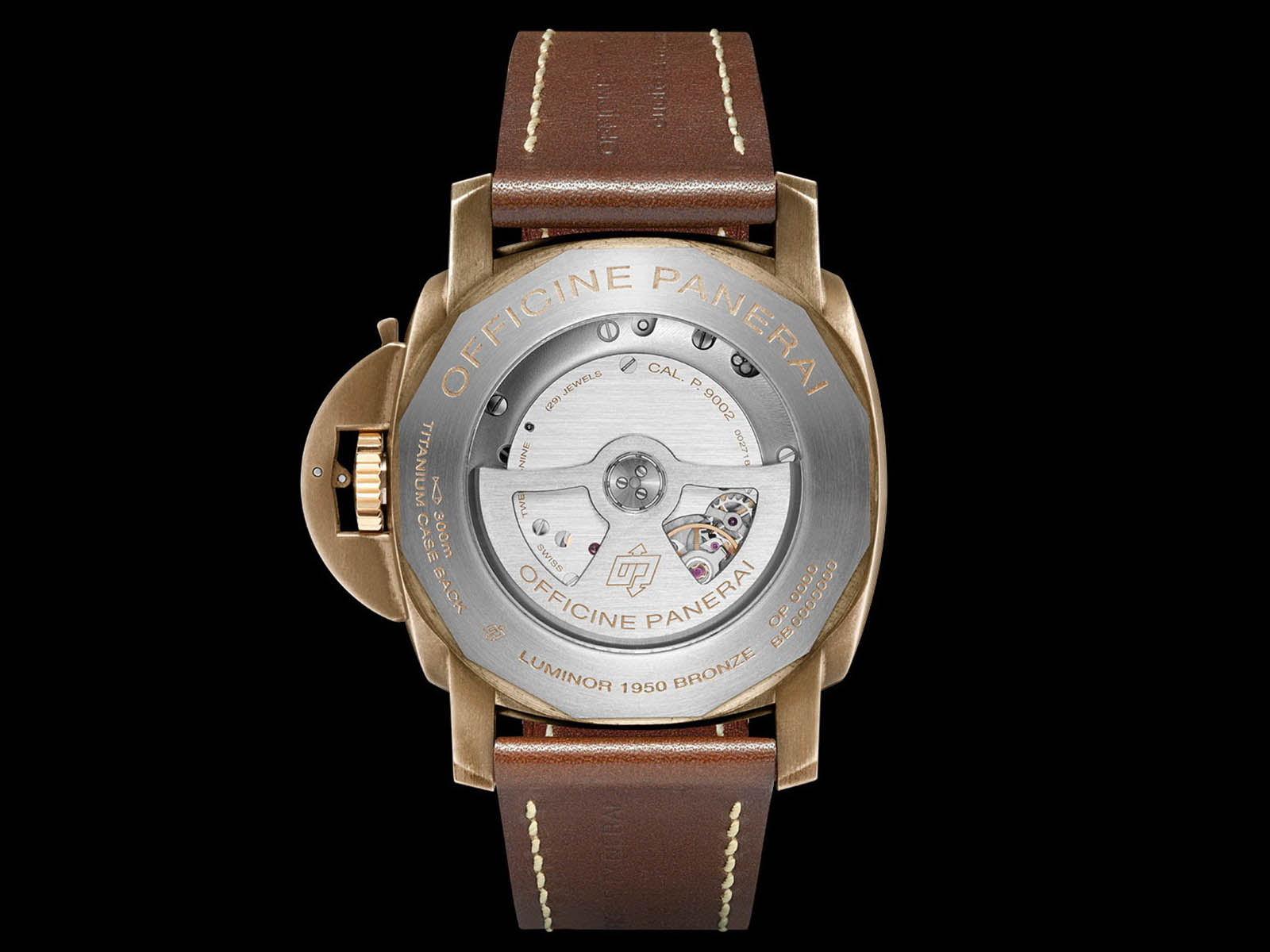 The philosophy underlying Panerai's idea of producing a watch with a bronze case was that each piece leaves the factory in the same conditions and then gets a unique "patina" depending on the wearer's lifestyle and conditions so that each watch has a different and personalized look. This meant, over time, each PAM00382 model was considered a unique piece. 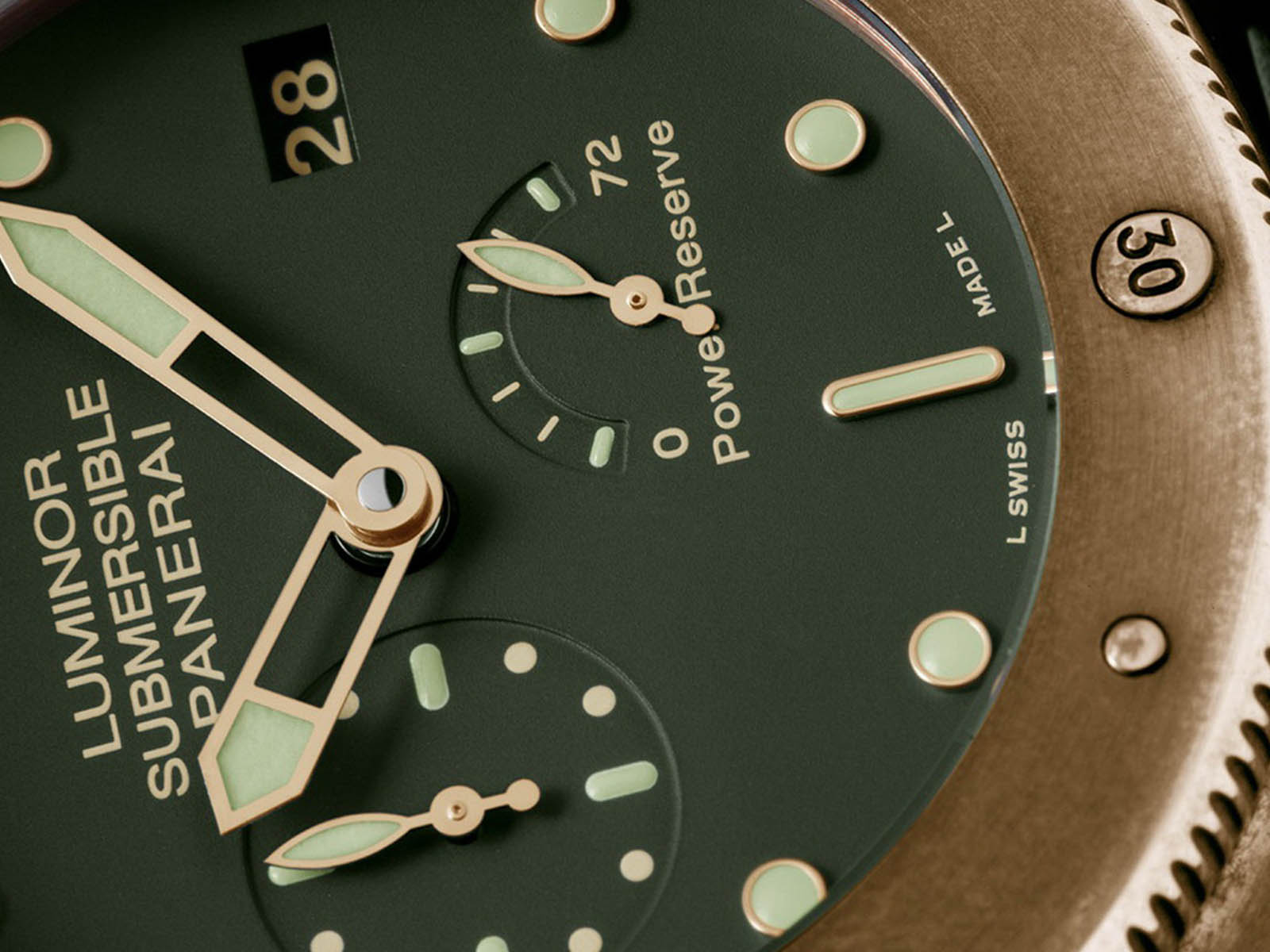 Three years later, in 2014, Panerai came up with the model PAM00507. Bonati's promise that the only timepiece with a bronze case would be the PAM00382 seemed to have been forgotten. PAM00507, limited to 1000 units only, stood before us as a version of its predecessor with a power reserve indicator. The model, which also had a 47mm diameter Luminor Submersible 1950 case, featured the automatic Caliber P.9002. This situation offended not only the owners of PAM00382 but also many Paneristi who were devoted to Panerai. The loss of trust due to a broken promise damaged the loyalty and passion of the fan base on which the brand relied. 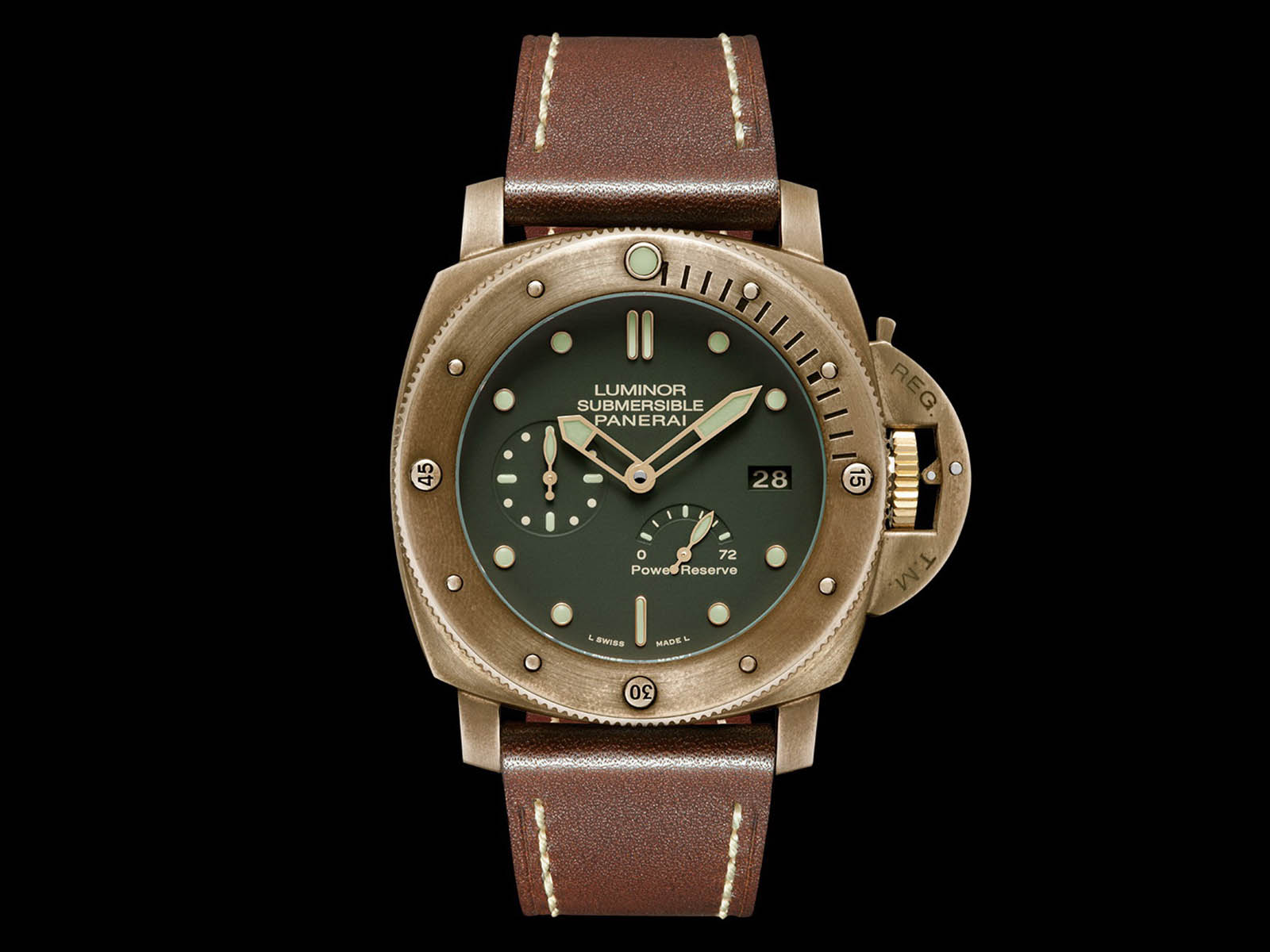 At the beginning of 2017, the brand introduced its third bronze case model. Again, 1000 pieces of PAM00671 were produced, with a 47mm diameter bronze case with a blue dial this time. The watch, powered by the automatic Caliber P.9010, was available with a blue leather strap compatible with the dial. 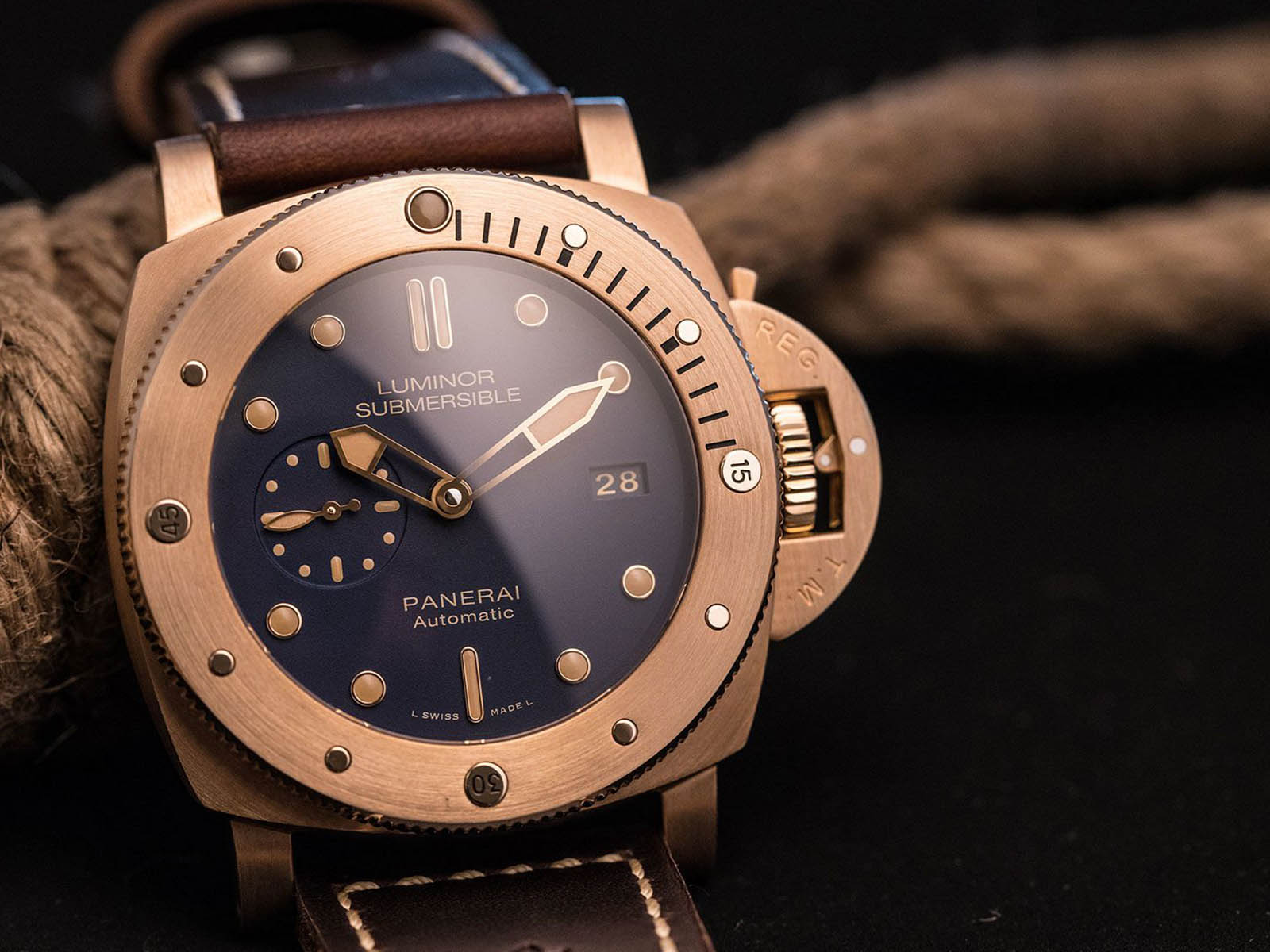 A fourth bronze-cased Panerai appeared in November 2017. The dial color of the watch, which also has a 47mm diameter case, turned brown. Powered by the automatic Caliber P.9000, the model was a unique piece. The proceeds from the auction of this watch were donated to the Royal Yachting Association. 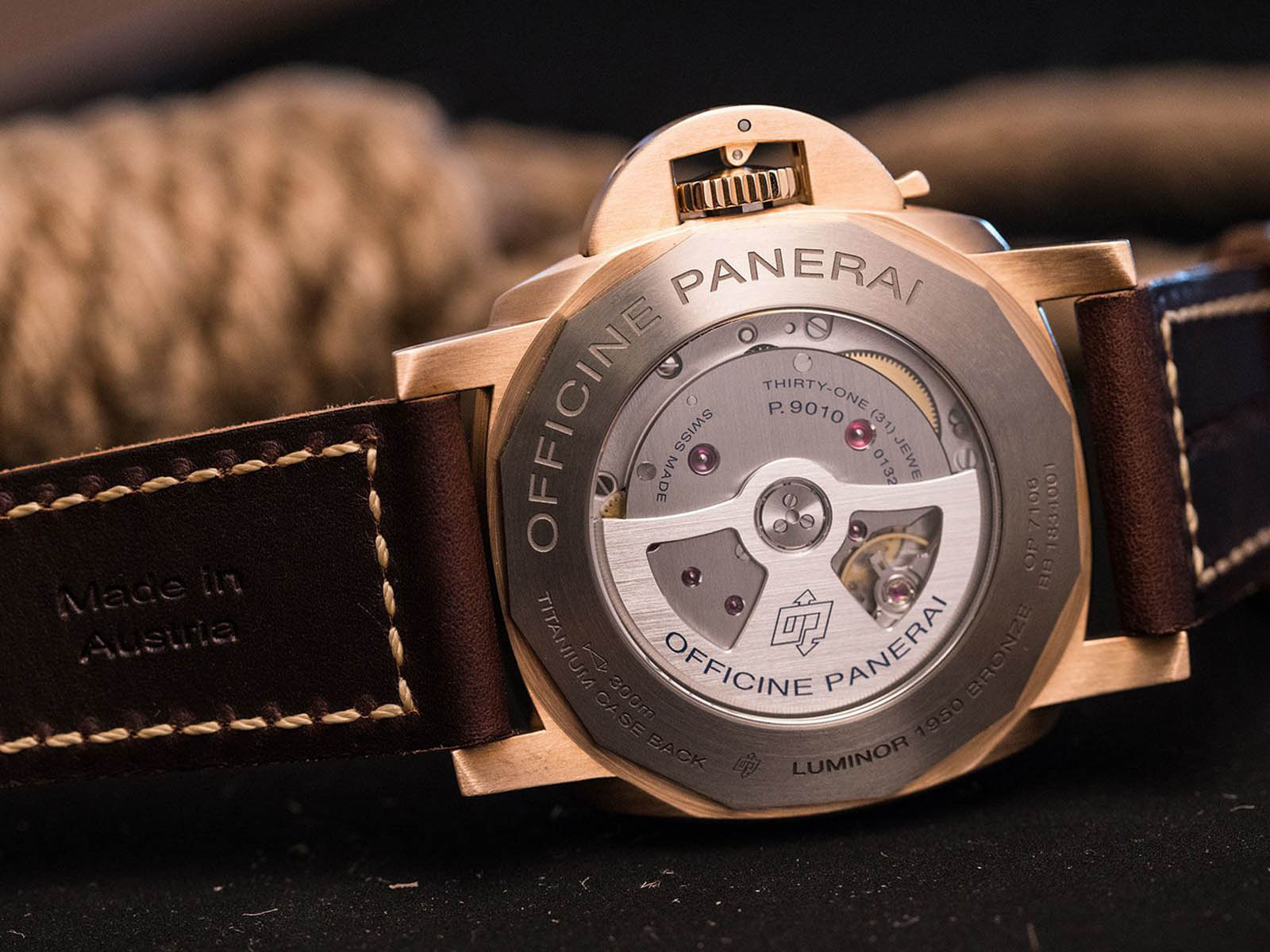 In 2019, Panerai introduced the PAM00968 again with a brown dial, but this time with a brown ceramic bezel insert, as a first for bronze Panerai. The watch, which was in the standard collection instead of a limited edition, has the automatic Caliber P.9010. 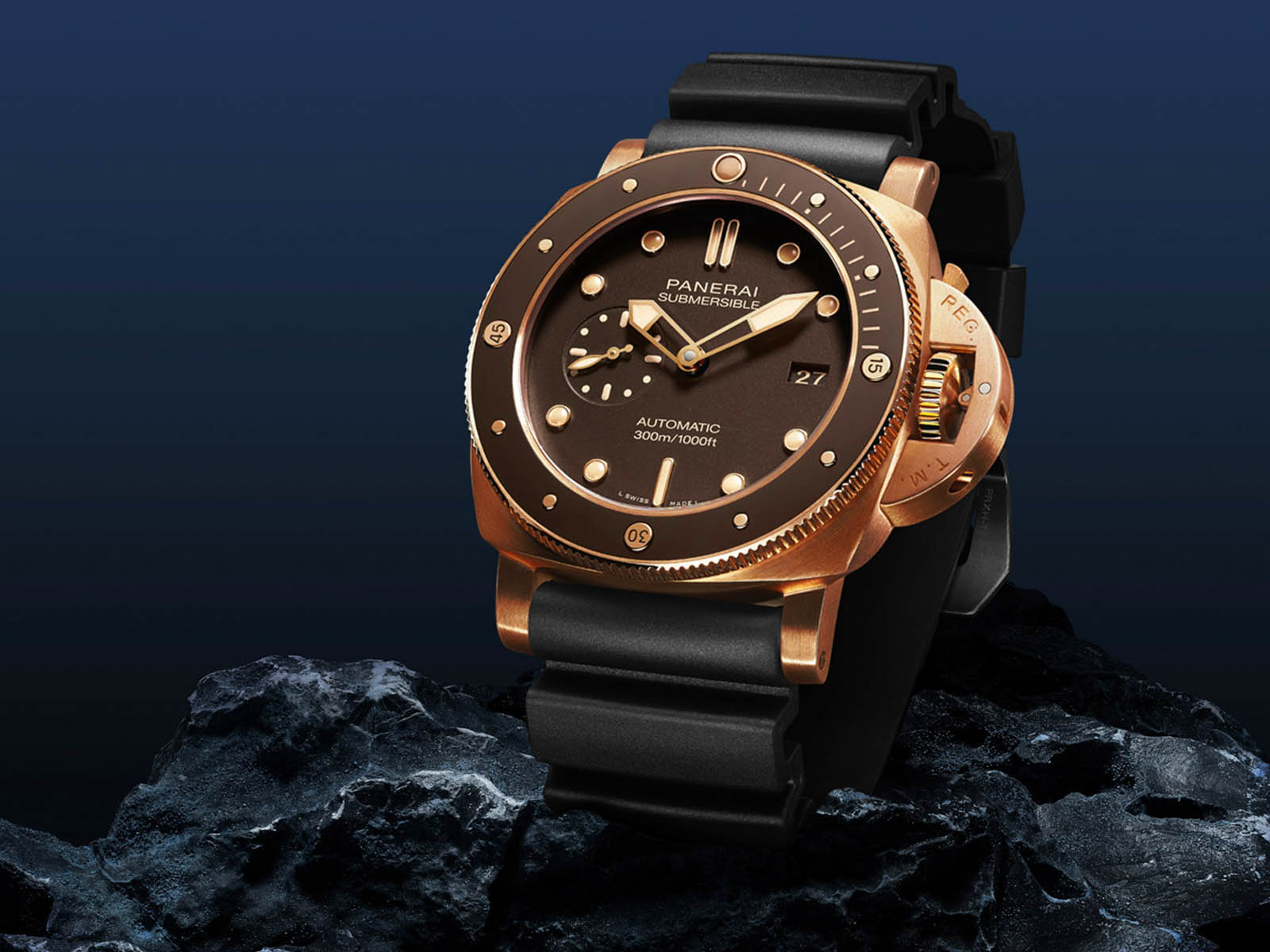 Another Submersible was added to the series in 2021; PAM01074. The automatic caliber P.900 is at the heart of the watch, which has a 42mm diameter bronze case and a blue dial. Called Blu Abisso, the watch was also included in the standard collection, just like the previous model. 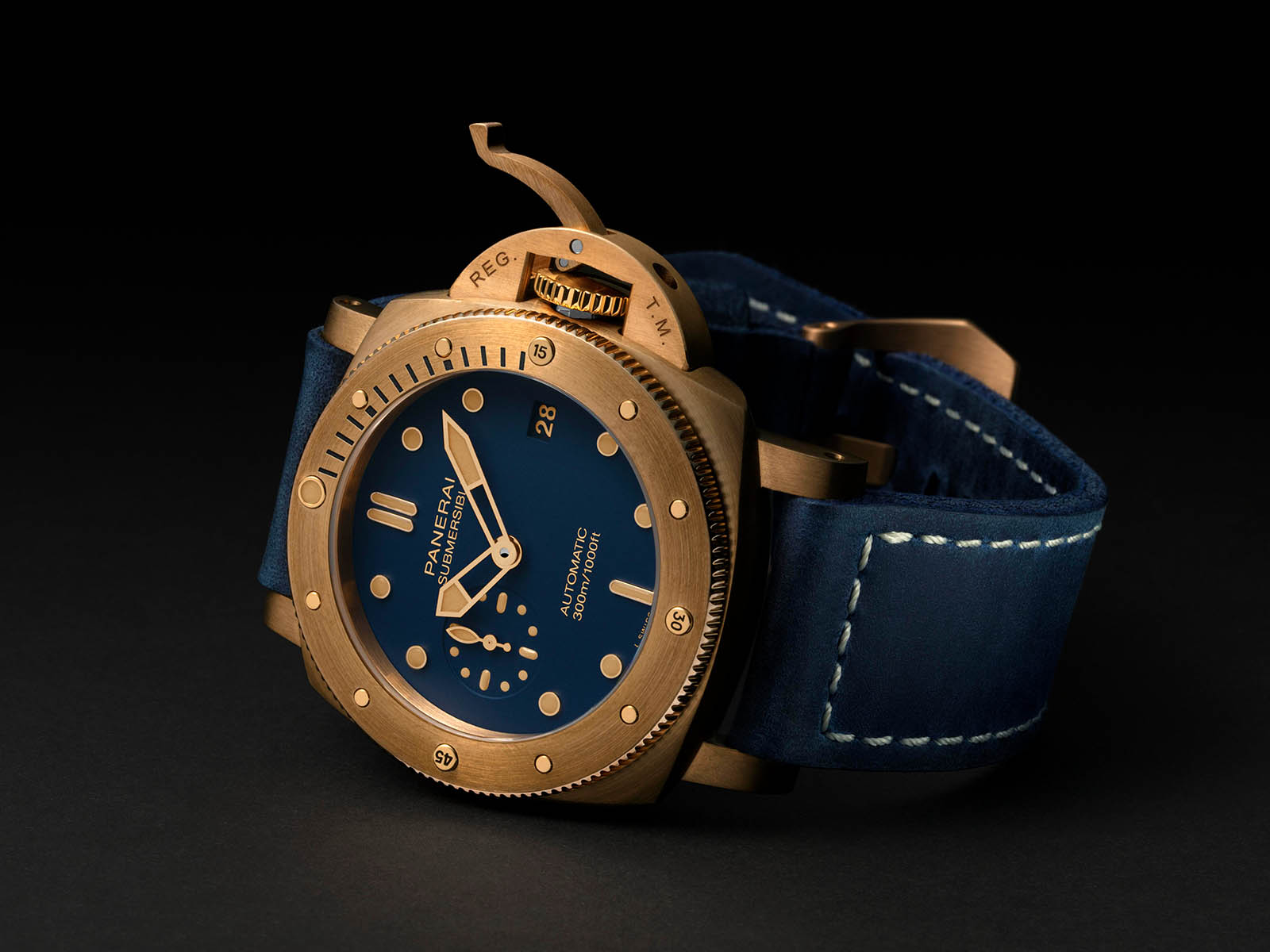 Now we are faced with a brand new bronze Panerai. PAM00760 brings together a Radiomir case with bronze material for the first time. The 47mm diameter watch has a green, textured dial and plexiglass glass. Photos of the model working with the manual winding Caliber P.3000 began to circulate quietly on the internet. 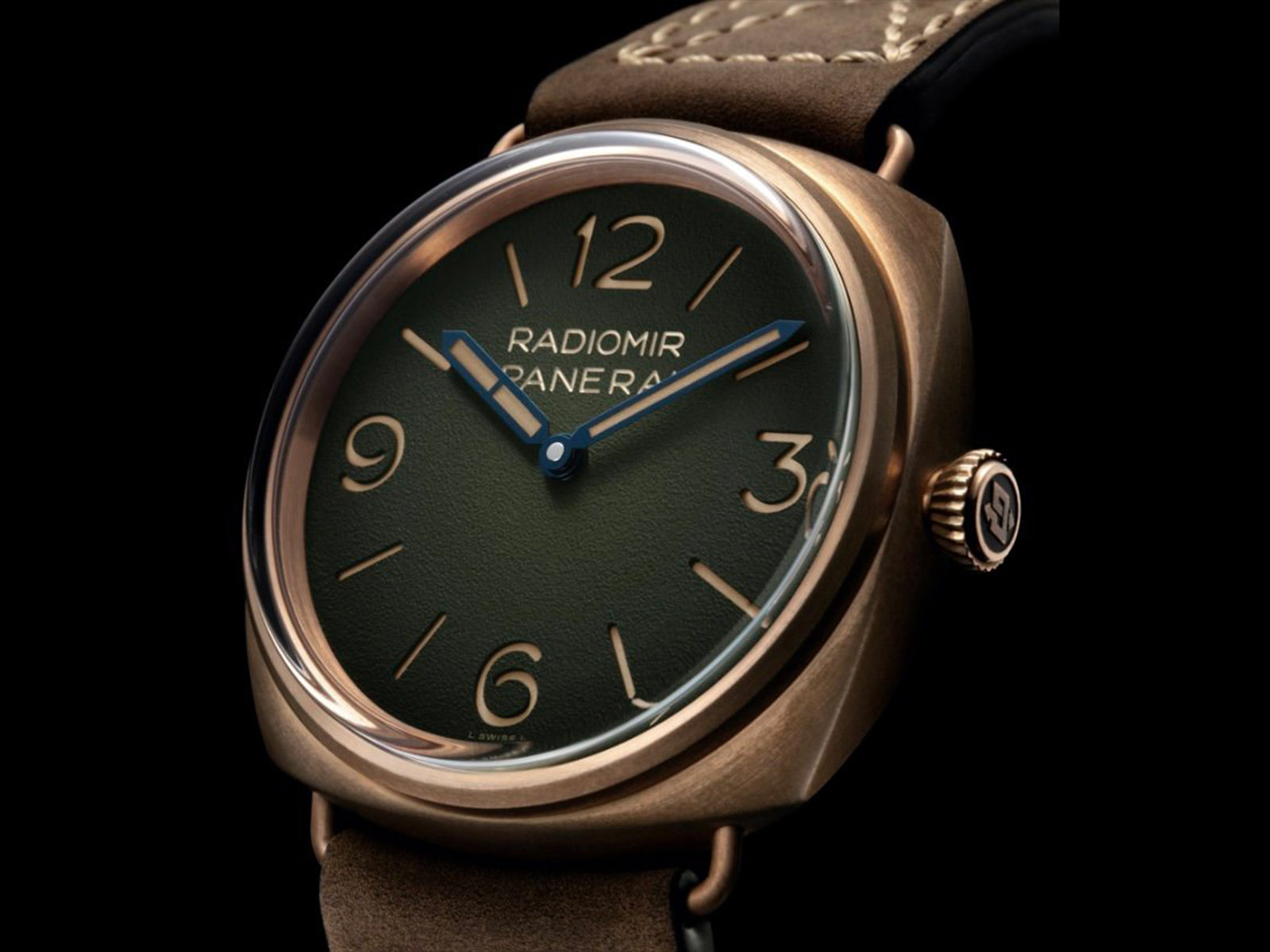 The PAM00382 was a revolutionary model for both the Panerai brand and the watch industry. It was not the first watch to introduce bronze into the watch world, but it had a unique appeal. After that, every bronze Panerai that followed tried to keep the original version alive, but it always seemed like something was missing. 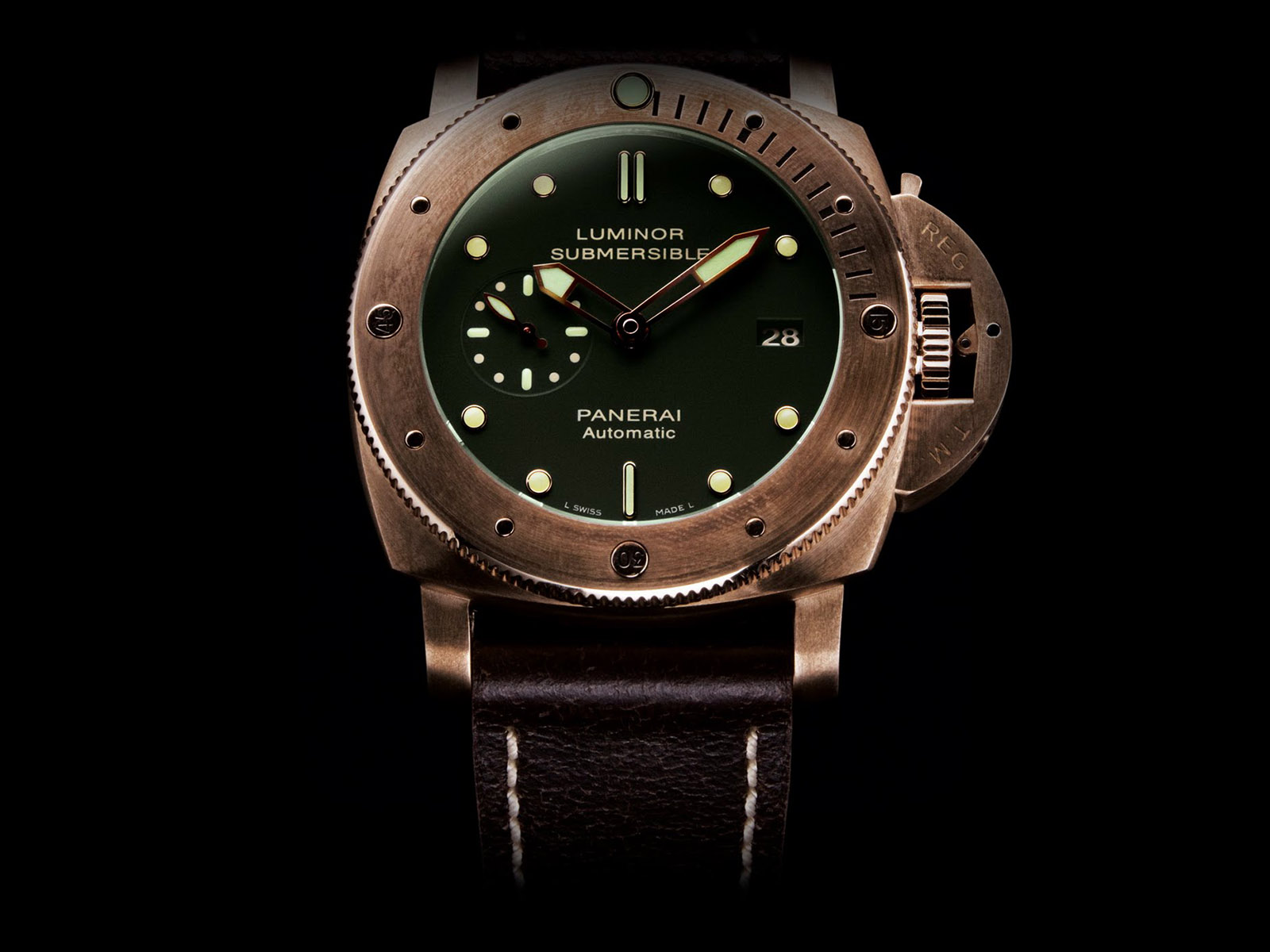 It is difficult to predict the future. Some models that will bring the true spirit of Panerai to life, fortunately, are still on sale. Well, it's up to us to reminisce about the old days with the two-armed wind-up Luminors and Radiomirs.