The legendary Zenith El Primero, known as the first automatic chronograph model in the history of traditional watchmaking, steps in to the 21st Century with the new model Defy El Primero 21, which gets attraction with its 1/100th measuring chronograph feature.

El Primero, developed by Zenith from the well established brands of the watch industry and known as the world’s first automatic movement with chronograph feature, is under the spotlight with the Zenith Defy El Primero 21 which takes the almost 50 years old adventure to the 21st century. 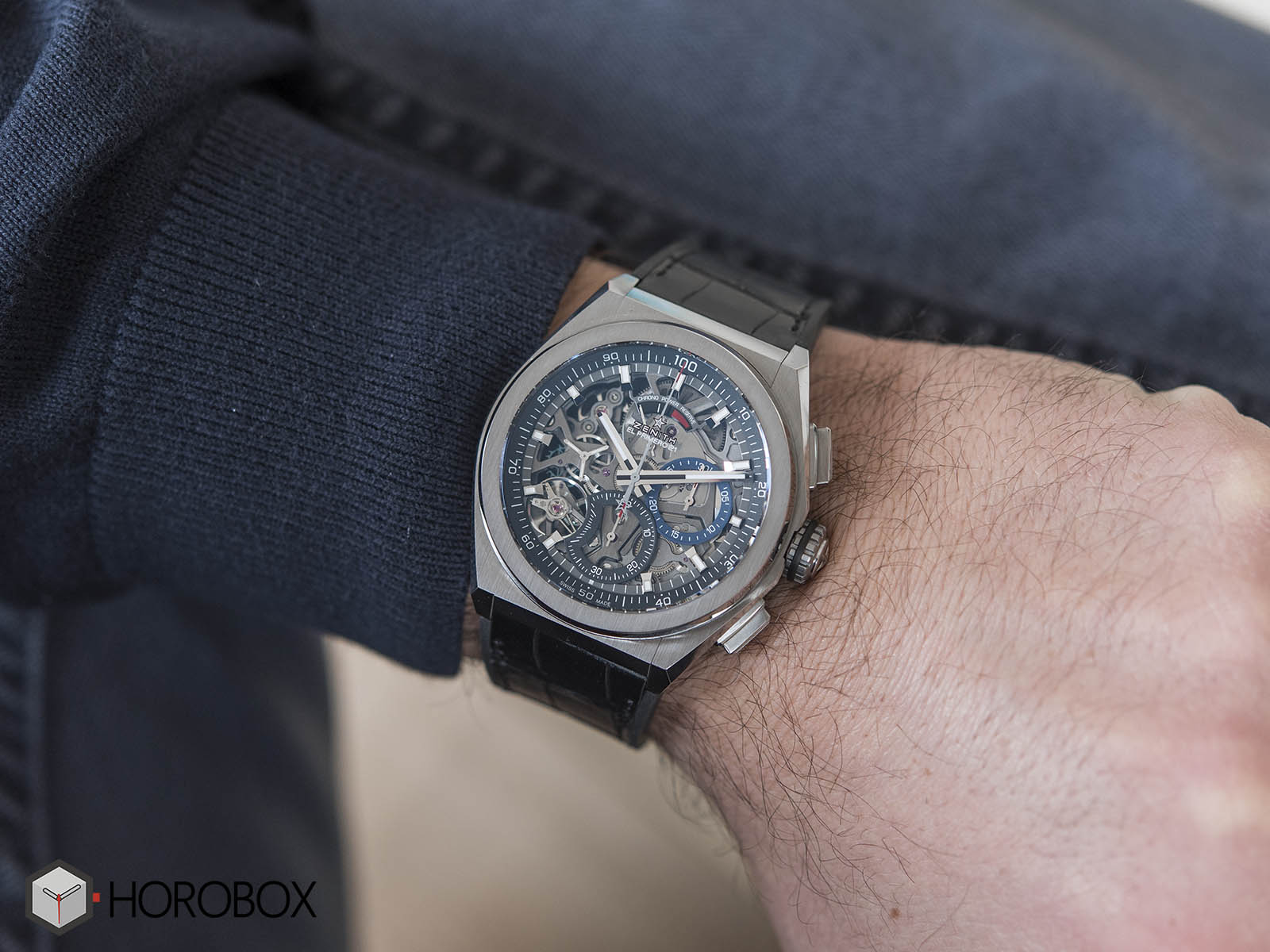 Having left behind the Nataf era known with design failures in early 2000s and the subsequent managerial changes in the following years, Zenith is highly acclaimed with their entirely renovated product group and the models with innovations that push the limits of traditional watchmaking now. The Zenith Defy El Primero 21, with both technical and design support from TAG Heuer and Hublot, from other important brands in the LVMH Group, attracts attention with its 1/100th measuring chronograph feature and its very reasonably set price tag. 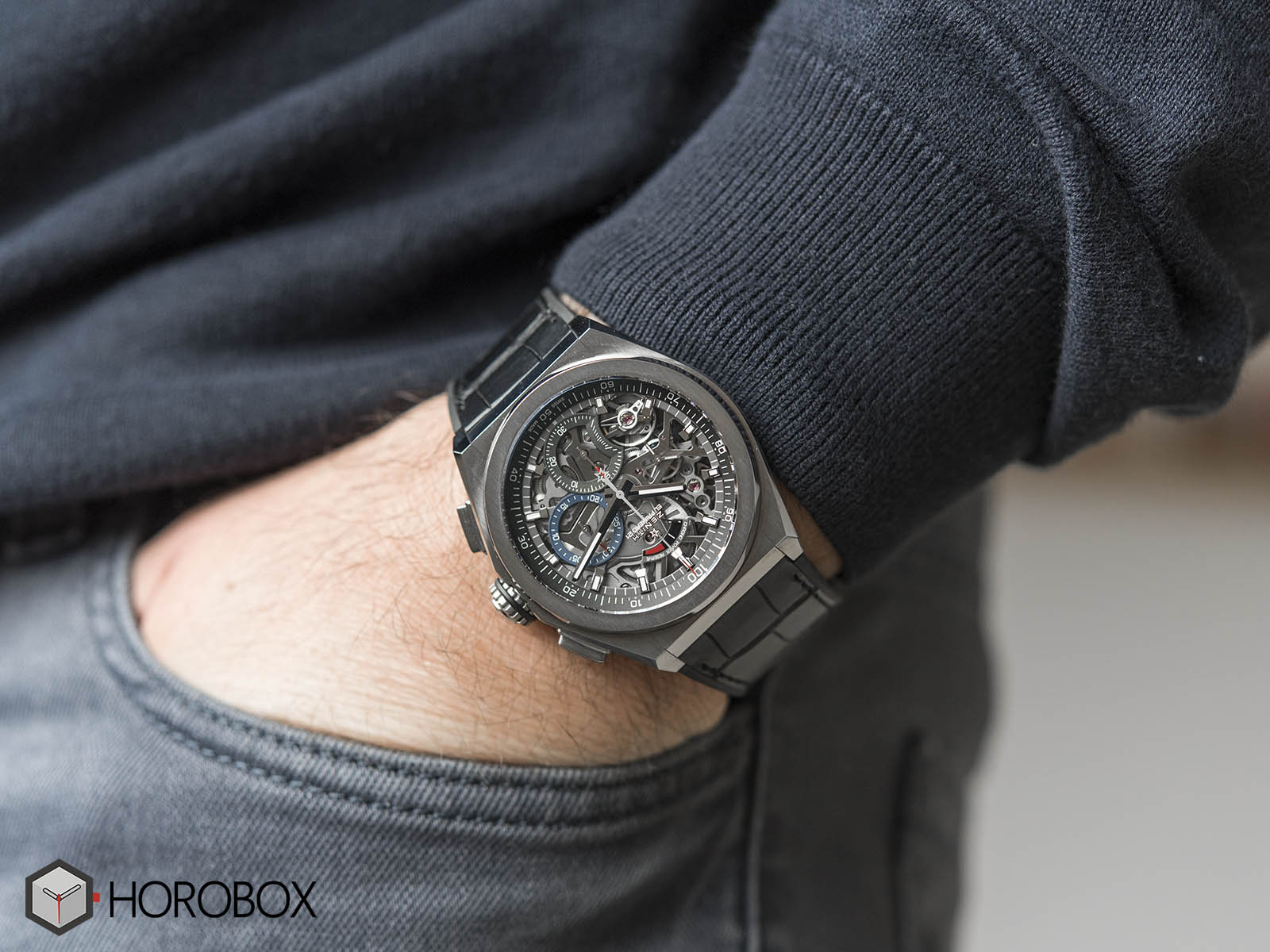 The model, which was introduced during the Baselworld 2017 exhibition, bears the signature of the industry’s legendary figure Jean-Claude Biver. Shortly before the takeover by the brand’s current president Julien Tornare, Biber briefly served in the brand CEO position. Apparently, Mr.Biver find enough time to put his magic hands over the El Primero Collection which is one of the most important product lines for Zenith. Of course, there are those who find the Defy name as a bad choice as it belongs to the dark Nataf days of the brand and there are others that might say the new model is “too Hublot” but when we left what happened behind, it’s just a matter of time to see how successful Zenith was with that model.

Zenith Defy El Primero 21 Collection, presented to the watch enthusiasts at the Baselworld 2017 exhibition, consists of three different options. The model I chose for my review is the skeleton dial and the titanium case version as known as Ref. 95.9000.9004/78.R582. The other models in the collection are the silver dial/titanium case version (Ref. 95.9001.9004 / 01.R582) and skeleton dial / aluminum & ceramic alloy case version (Ref. 24.9000.9004 / 78.R582) bearing the flagship model title. I believe the model I chose for the review is the most optimal version in the collection as I am ready to pay a reasonable premium to have the privilege of enjoying the movement from both sides. However, I will not prefer the aluminum & ceramic alloy case over the titanium one. 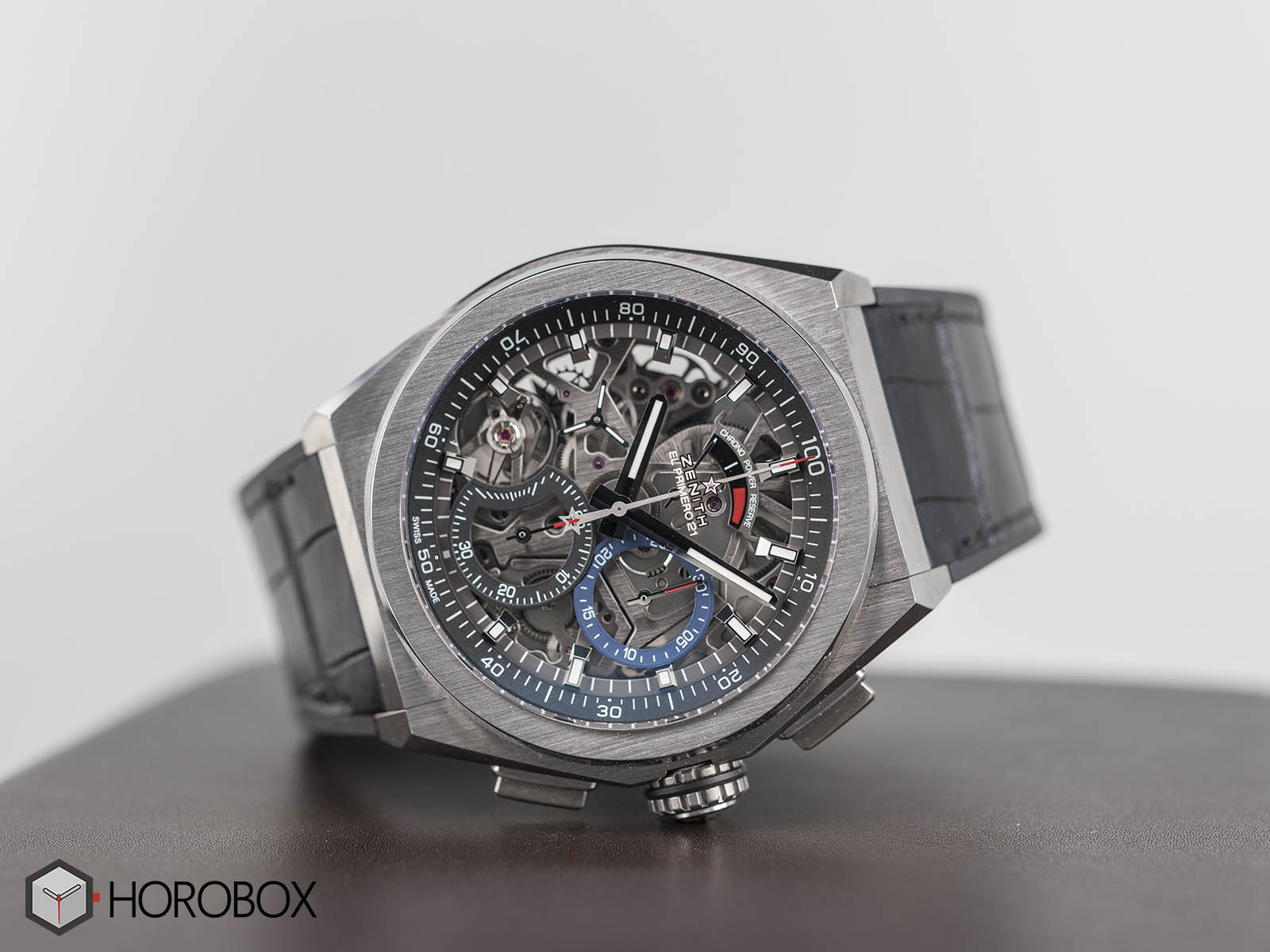 The model has an impressive case design with very strong lines. The use of titanium material for the 44m diameter and 14.5mm tall case was a clever move as a stainless steel case would have an above average weight with these dimensions. On both sides of the case, scratch-resistant sapphire crystals with antireflection coating were used which allows you to enjoy the movement from both sides with pleasure. 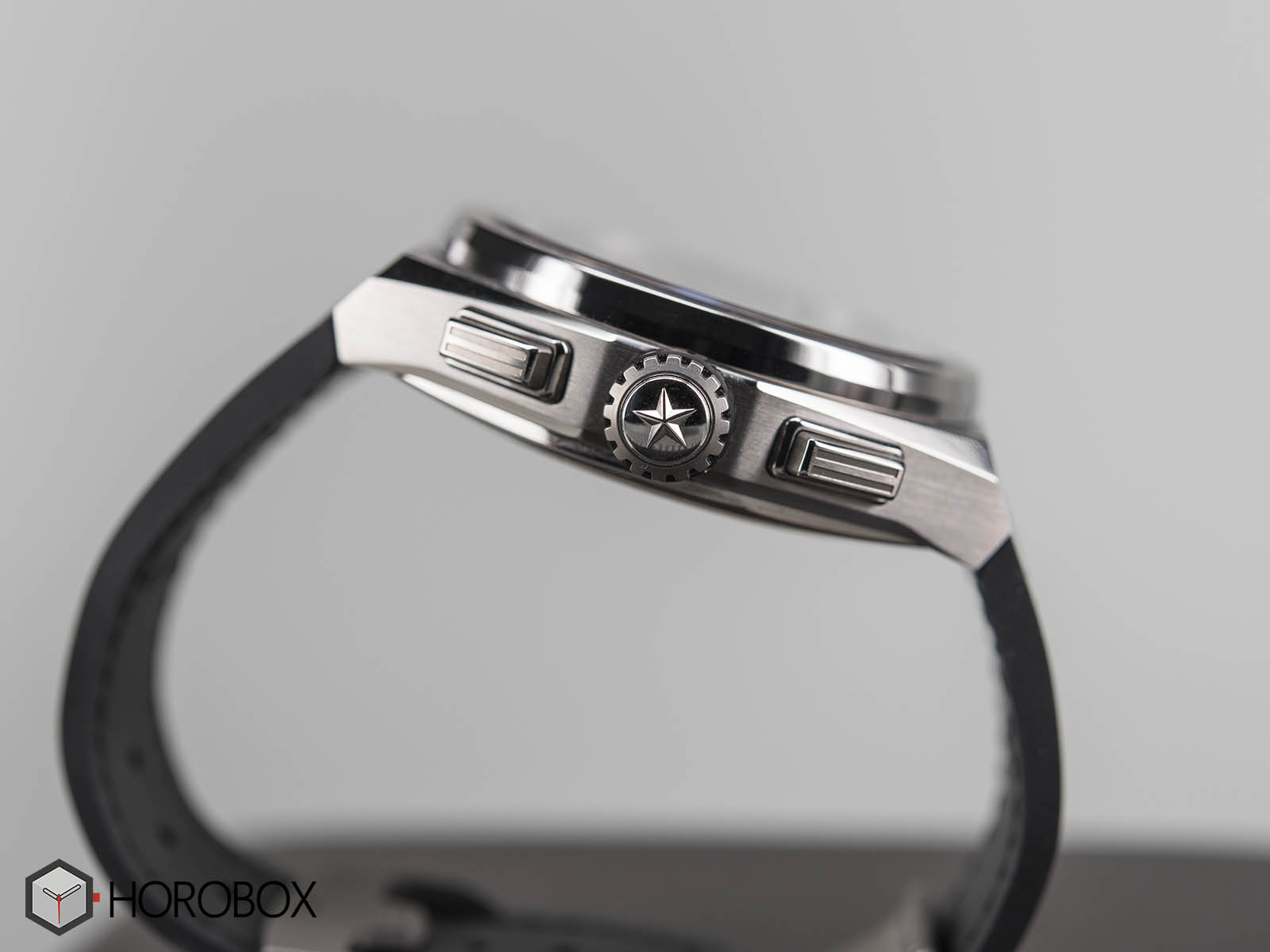 The matt surface form, which dominates the case’s finish, is in perfect harmony with the high-tech character of the model. The use of the matte surfaces, especially on the front side of the flat bezel, added an industrial feel to the model. The chronograph buttons are designed in a rectangular shape which reminds Hublot as the same buttons are often used in the brand’s Classic Fusion models. Unfortunately, I do not think the same for the winding crown that accompanies these buttons as it looks like it belongs to another timepiece.

Thanks to the short and flat lug design, the case sits comfortably on the wrist. The caseback is fixed to the case with four miniature screws. In fact, I don’t like casebacks that are not screw-in type but the 100 meters water resistance rating is enough for me to stop worrying about that. 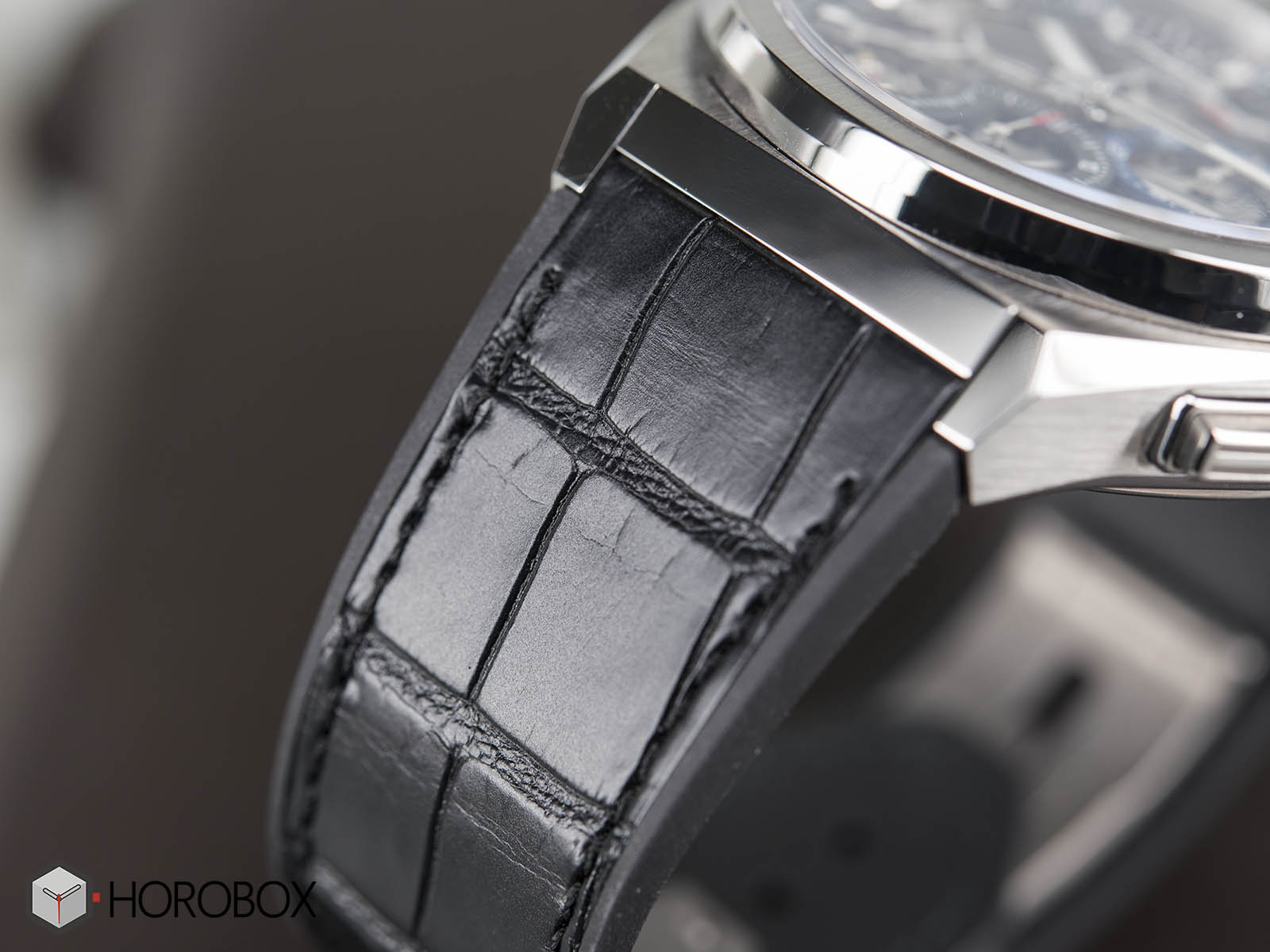 I have mentioned that there are two different options in the collection in terms of dial type. Actually, I am not a big fan of skeleton dials however; Zenith Defy El Primero 21 is definitely a model I would like to see its movement as much as possible. Besides that, I also always prefer a properly designed skeleton dial instead of that Open Heart style I never liked.

Despite the open works design the dial sports accents that help you to read the time and chronograph displays clearly. The hour and minute markers are clearly applied on an outer chapter ring around the dial. That helps you to read the time correctly. There is a linear crescent-shaped power reserve indicator at 12 o’clock right above the Zenith and El Primero 21 texts. The sub-dials are placed in 3-6-9 Tri-Compax lay-out and accompanied with a white colored center mounted chronograph second hand. Thanks to the SuperLuminova phosphor fillings on the hands and indices, sufficient eligibility is provided in dark environments. 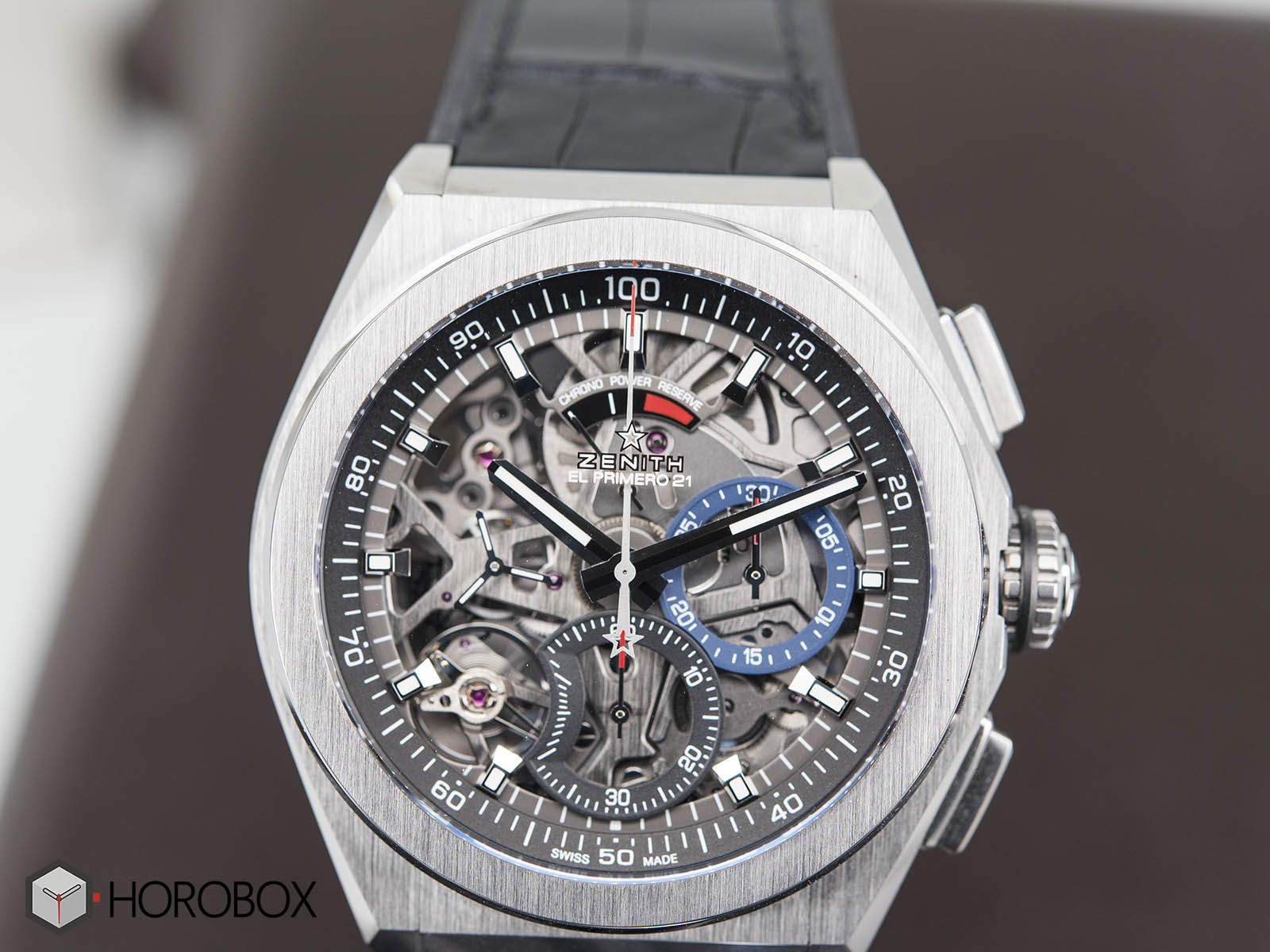 Of course, one of the most important parts of the model is its movement. It sports a 1/100th measuring chronograph feature which is arguably the most drastic upgrade to the legendary El Primero movement in its life span of nearly 50 years. A chronograph that is capable of measuring in such a tight value may be a new thing for Zenith. However, the first watch that comes to mind in this sense is the TAG Heuer Carrera Mikrograph. The model, which was produced for a short time, was powered by a similar (if not the same) movement. I think it is good to point out that, when names like Biver and LVMH Group are involved in the same project, it is quite natural that such synergy is formed. Therefore, it’s more like information than a criticism. At the end of the day, TAG Heuer Carrera Mikrograph nor looked that cool and neither priced that affordably. 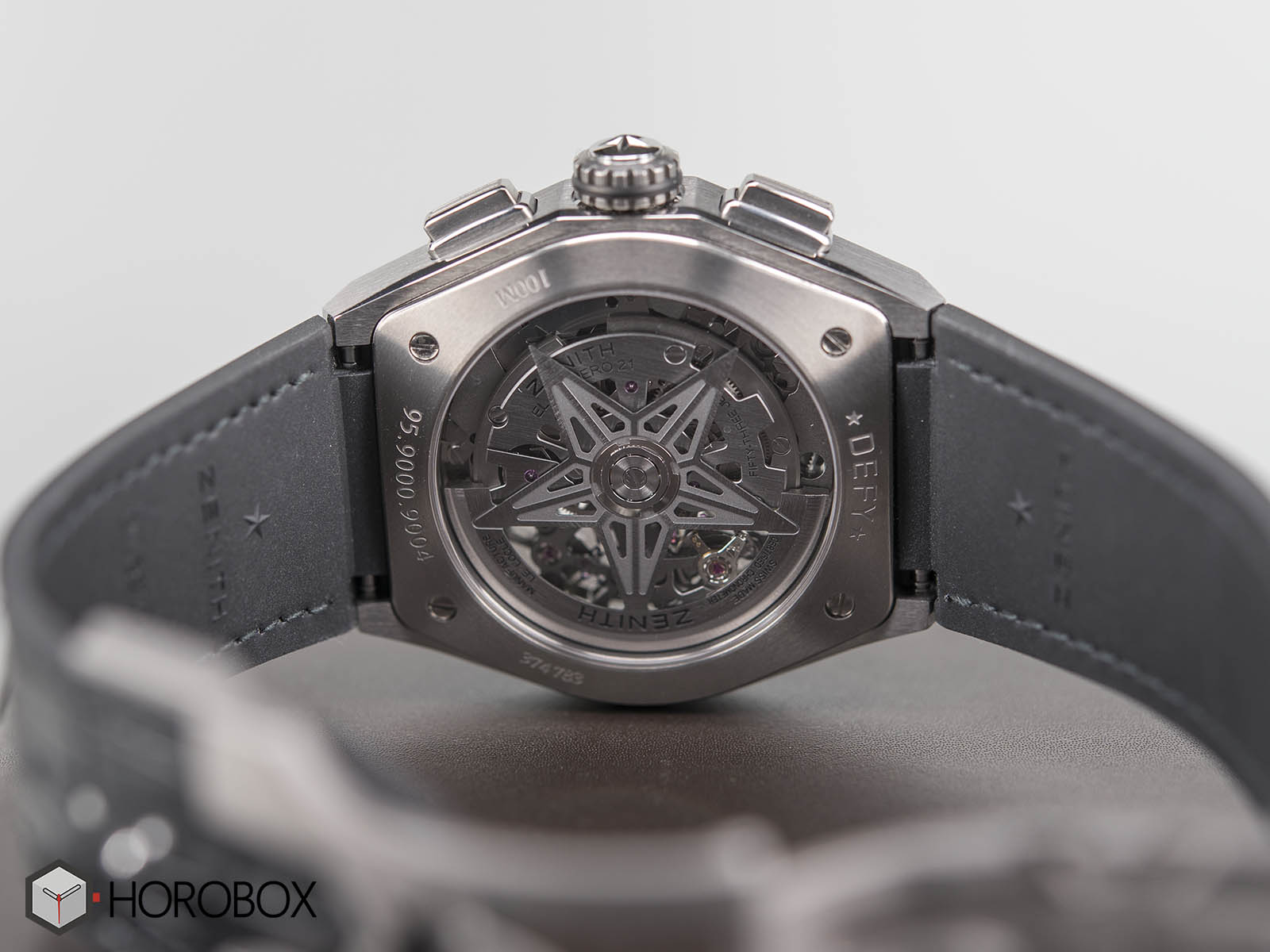 Zenith Defy El Primero 21 is powered by the Caliber El Primero 9004 which opens the doors of the 21th century to the El Primero Collection. Just like in the first El Primero model, the self-winding movement beats at 36000vph. The interesting part is this 36000vph movement sports a chronograph module that beats at 360000vph. Shortly named as the 5Hz + 50Hz system, the key feature of this concept is the double chain design. The movement includes two different systems with their own balance wheels, gear trains and mainsprings. More importantly, it can display 1/100th measuring chronograph readings on an analog lay-out.

In versions with the skeleton dial option, you enjoy the movement with great pleasure. In the meantime, there are no Cotes de Genève decorations or blue screws, which you are used to seeing in calibers that give life to the High-End Swiss watches. Zenith aims to draw attention to the high-tech design of the extravagant movement from aesthetics by using the same vertical brushed and sand blasted components. 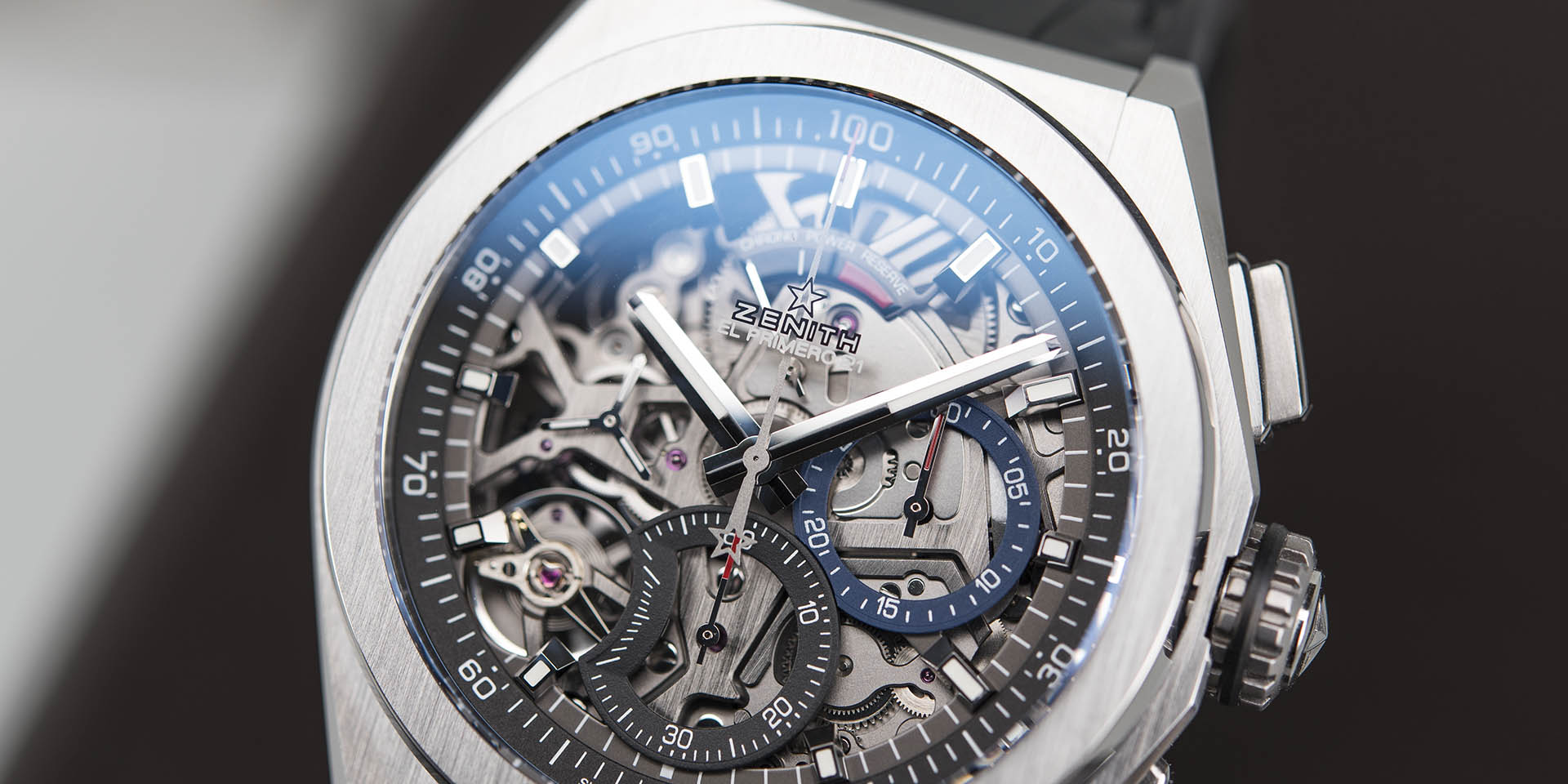 The vulcanized rubber lining black alligator strap and Zenith signed matt titanium folding clasp are among the details that reveal the Hublot inspiration. Besides the perfect harmony, those components also work flawlessly in terms of comfort. 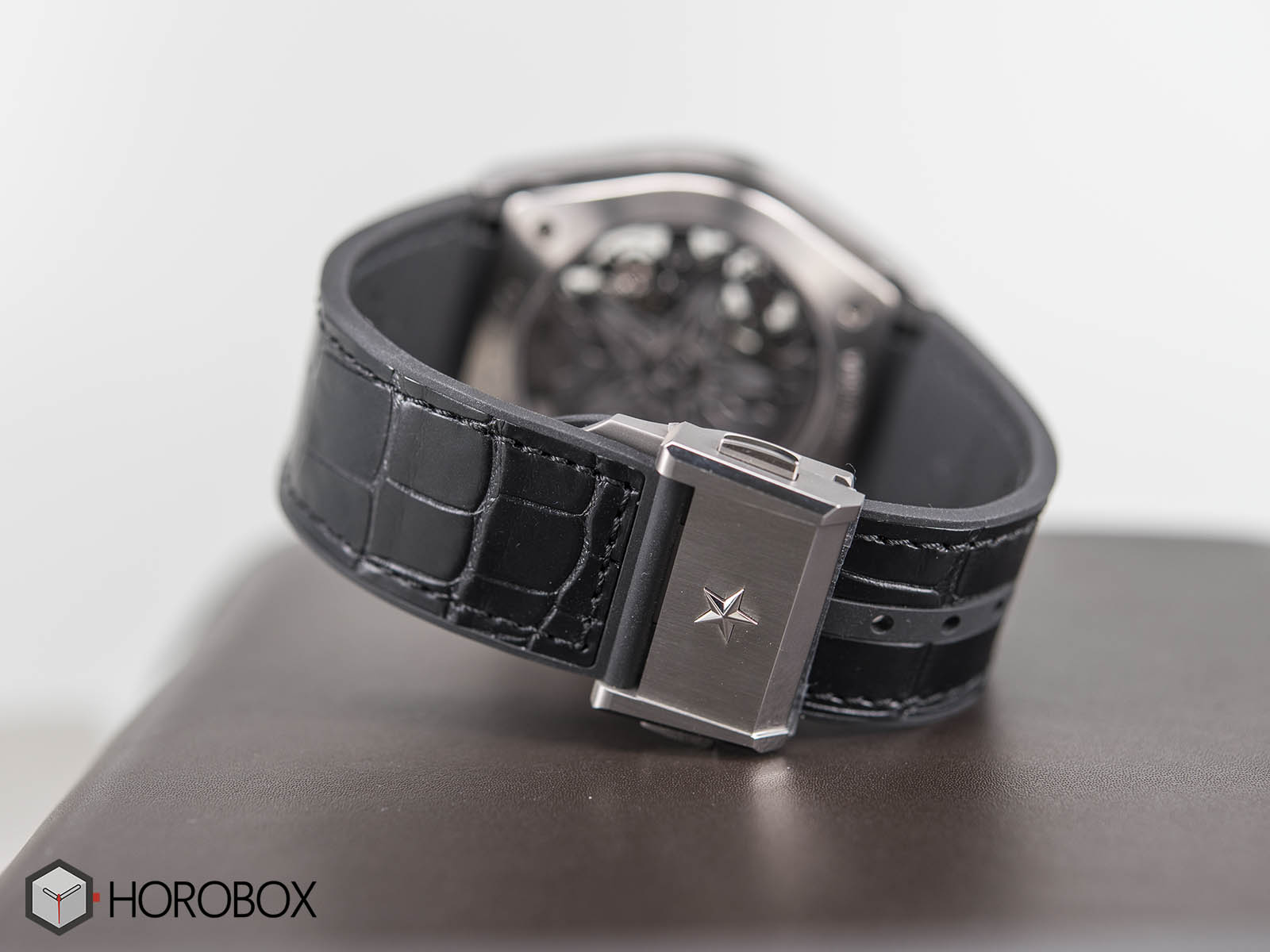 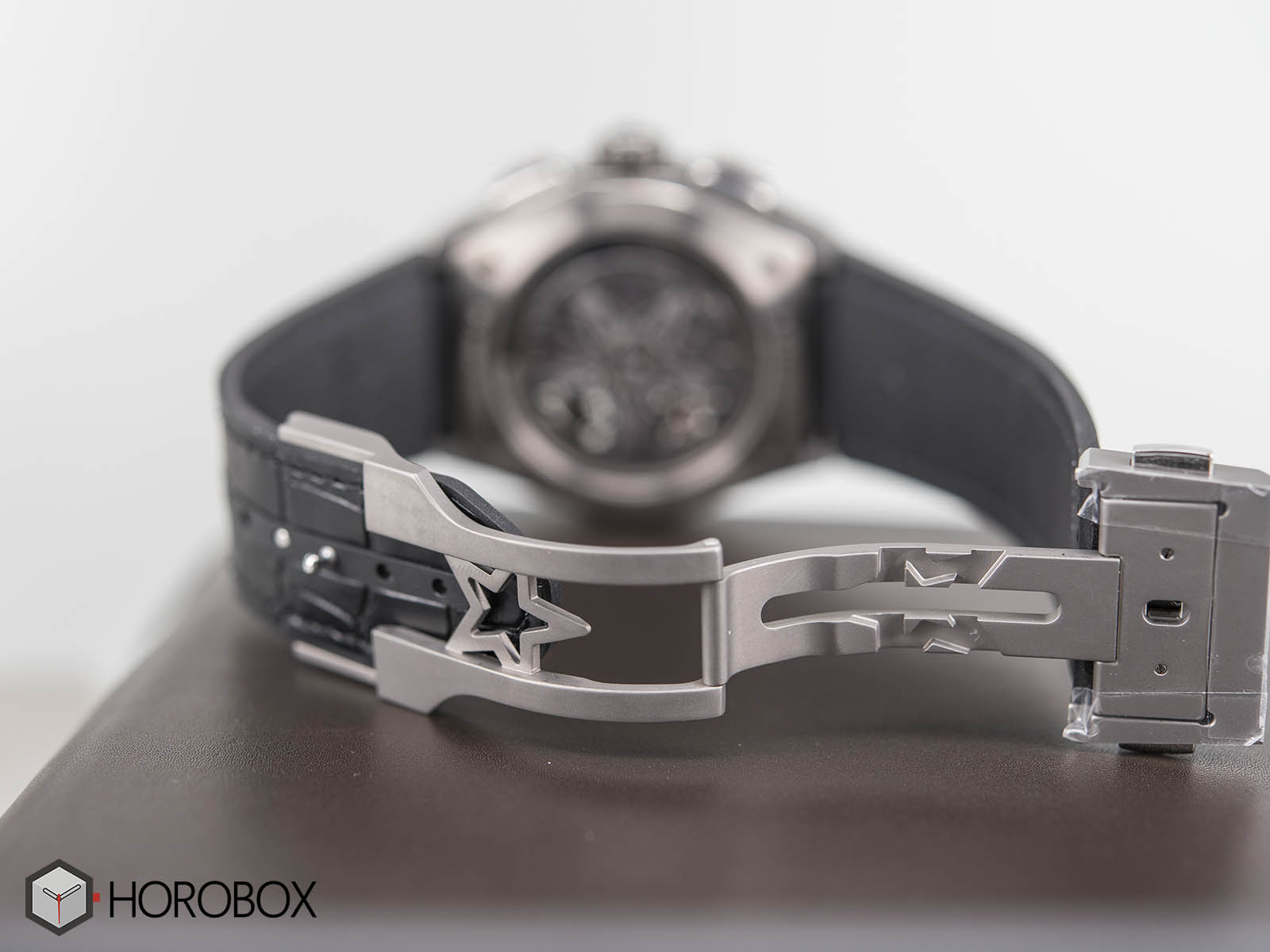 The most difficult part of writing about luxury timepieces is definitely the “price” part. Because while trying to inform people about the design or the engineering side of the timepiece, you are also faced with facts that the price of the product you are talking about is not cheap at all. For this reason, I always enjoy writing about the models with higher price/performance ratios most. Why am I talking about these? Because 1) we all have our life standards, priorities and budgets that we allocate for our hobbies 2) the Zenith Defy El Primero 21 model that I have here practically re-defines the “value for the money” phrase with its MSRP of CHF 11,900. 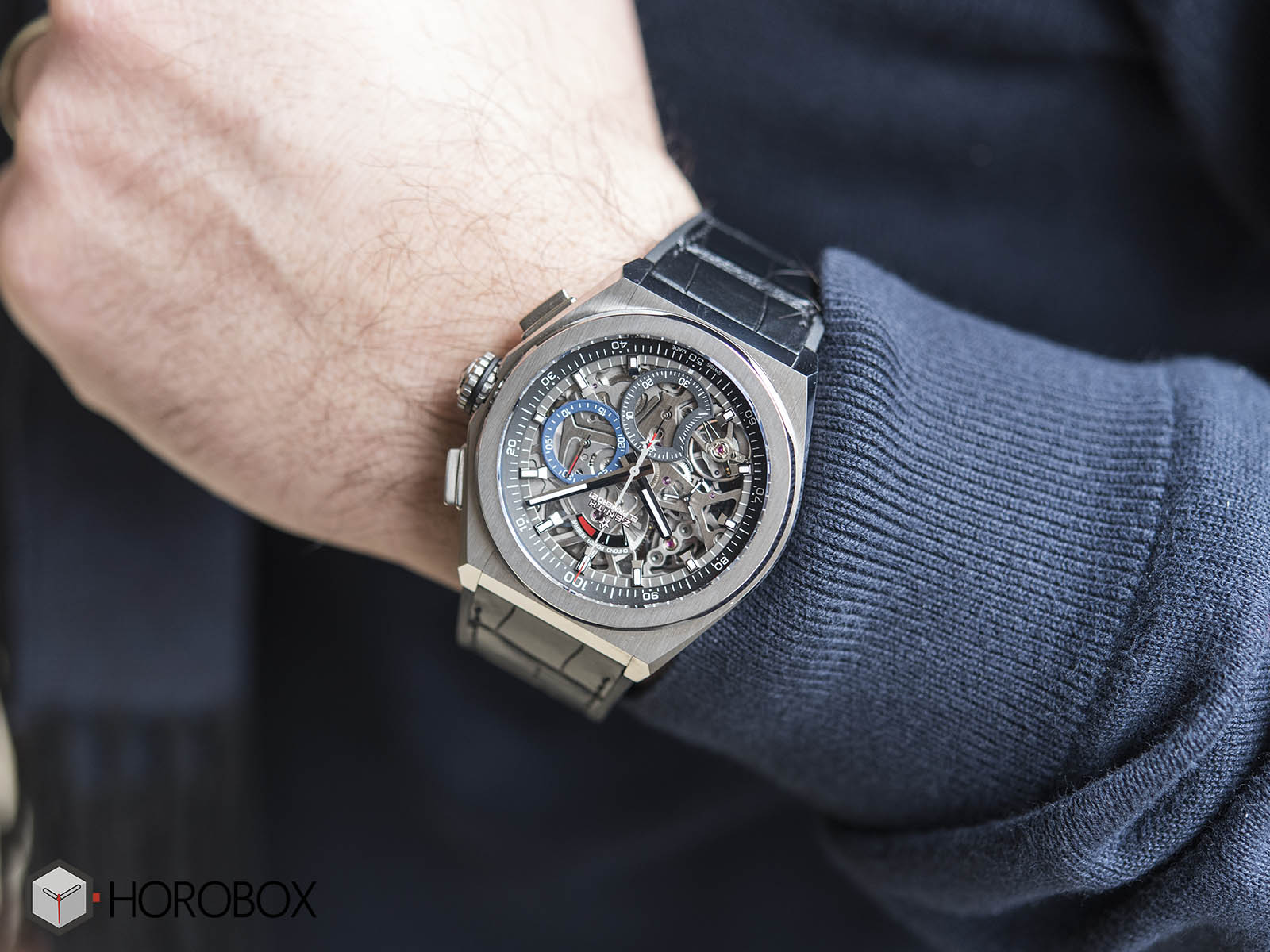