One of the most important pillars modern watchmaking should stand on is consistency. As today we live in a fast world, manufacturers do their very best to improve themselves and their offerings every year.

Consistency therefore is very important, but a more and more rare phenomenon. As brands are in tough competition with each other they tend to lose focus of what makes them truly them, and unique.

Fortunately there are exceptions. While tastes and preferences vary, there are some pieces whose iconic features and cult status cannot be denied. 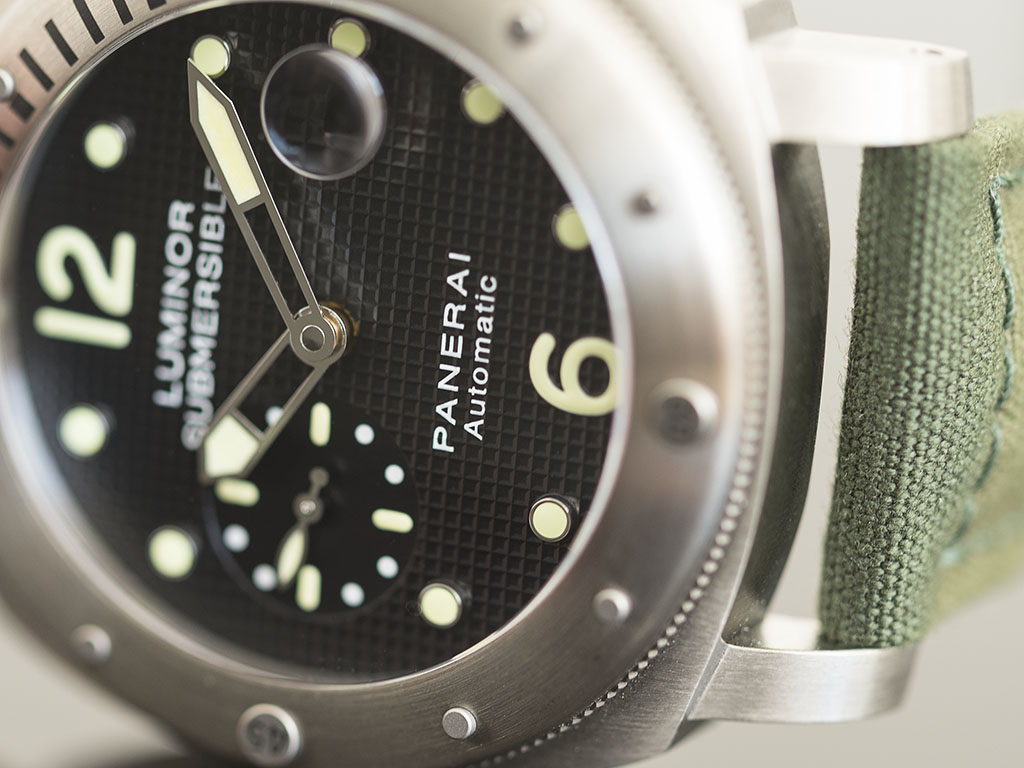 Today we would like to introduce you to one of these signature watches, namely reference PAM0025 from Panerai. While Panerai fanatics will need no introduction, there is a lot to this watch that is worth mentioning. This was the PAM to feature: 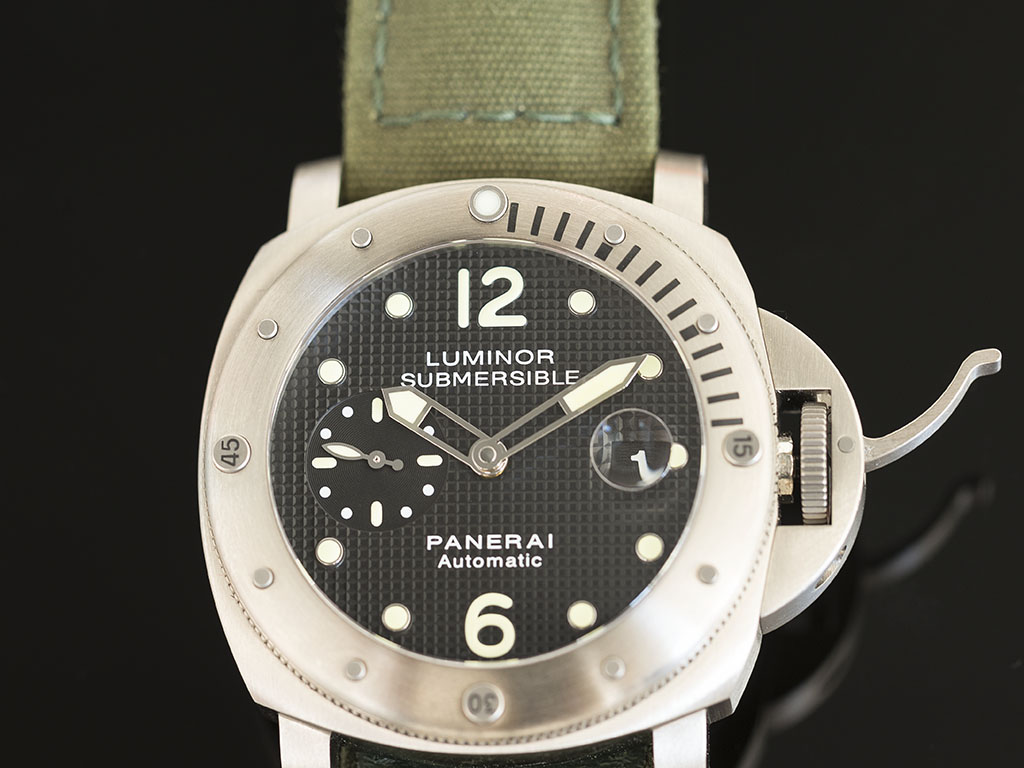 During the first year of production in 1998 there were a remarkable 1500 pieces produced and it succeeded to protect its place within Panerai‘s offerings up until 2013.

The only other model that was able to do the same was another Submersible, the reference PAM0024.

On the 44mm titanium Luminor case you will find a unidirectional bezel of course, an essential on divers watches.

Panerai‘s crown protector looks exceptionally well on this piece featuring the iconic lever that keeps the crown in its place. As diving watches are ought to be, the PAM0025 is easily readable, equipped with a Hobnail (waffle patterned) dial. 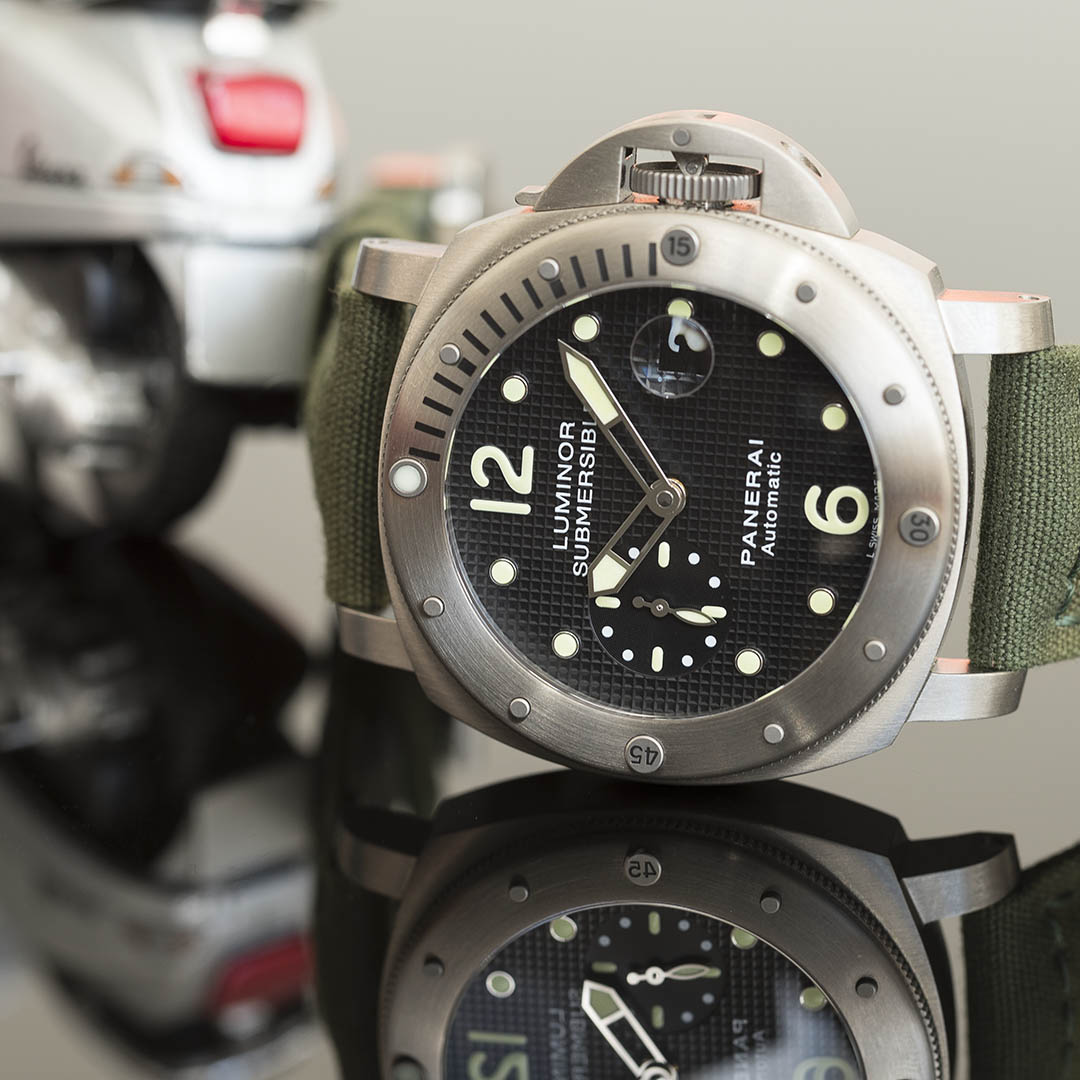 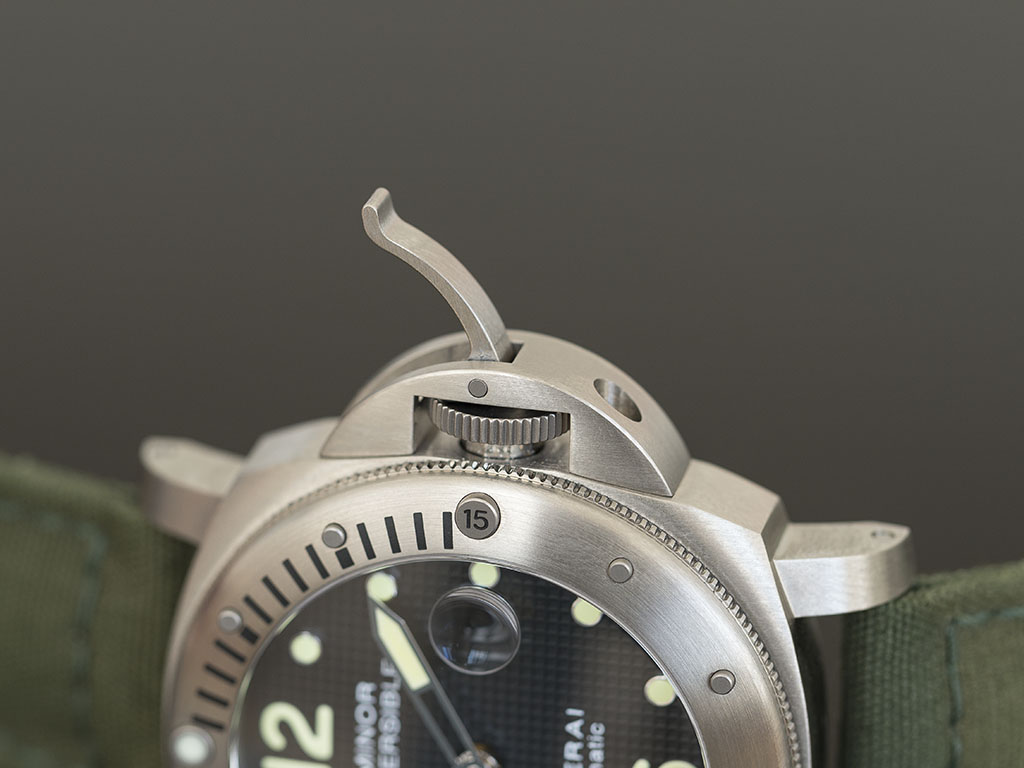 Panerai is not using this on too many models, but you can find some pieces among 2014‘s limited editions, for example reference PAM00569. The skeletonized hour and minute hands will also make it easy to read the time in even the most trying conditions.

The luminova filled indexes will only further contribute to the watches utilitarian side. During the first years of production early models were equipped with tritium! The white Panerai markings together with the textured dial give the watch just enough dimension and contrast for a sportive appeal.

The PAM0025 is covered with a sapphire crystal glass and a magnifier at 3 o‘clock placed over the date indicator. The titanium case back is strongly screwed to the case, allowing water resistance up to 300m. Even though some diving watches offer higher values, it will certainly not let you down during your underwater endeavors. 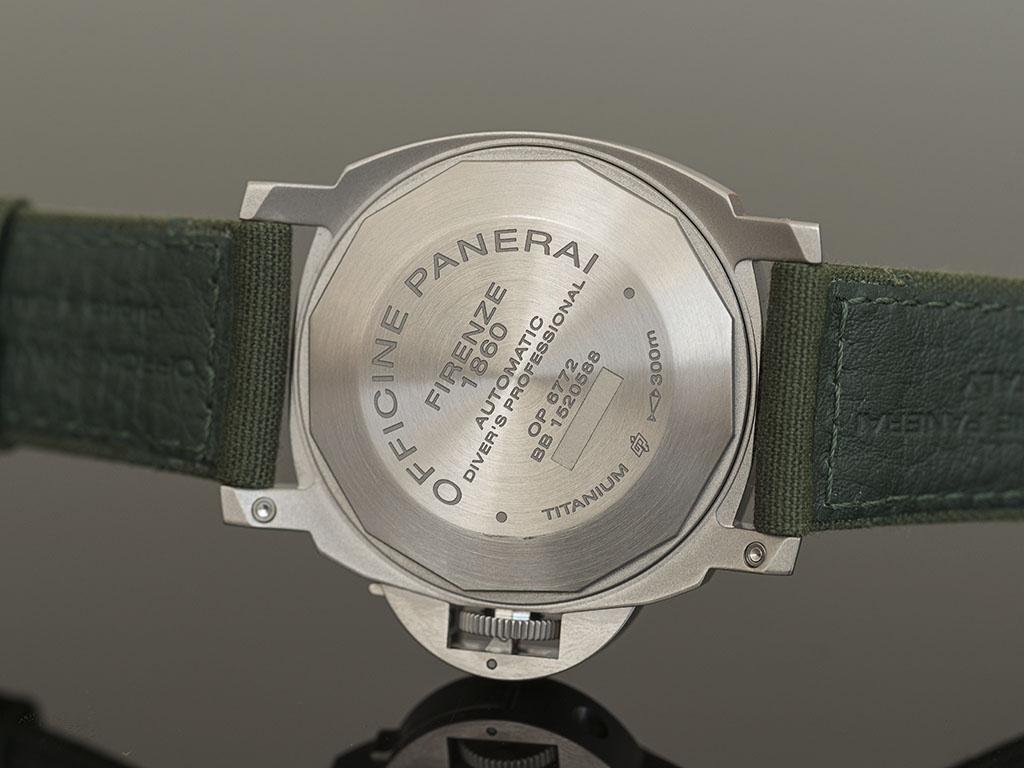 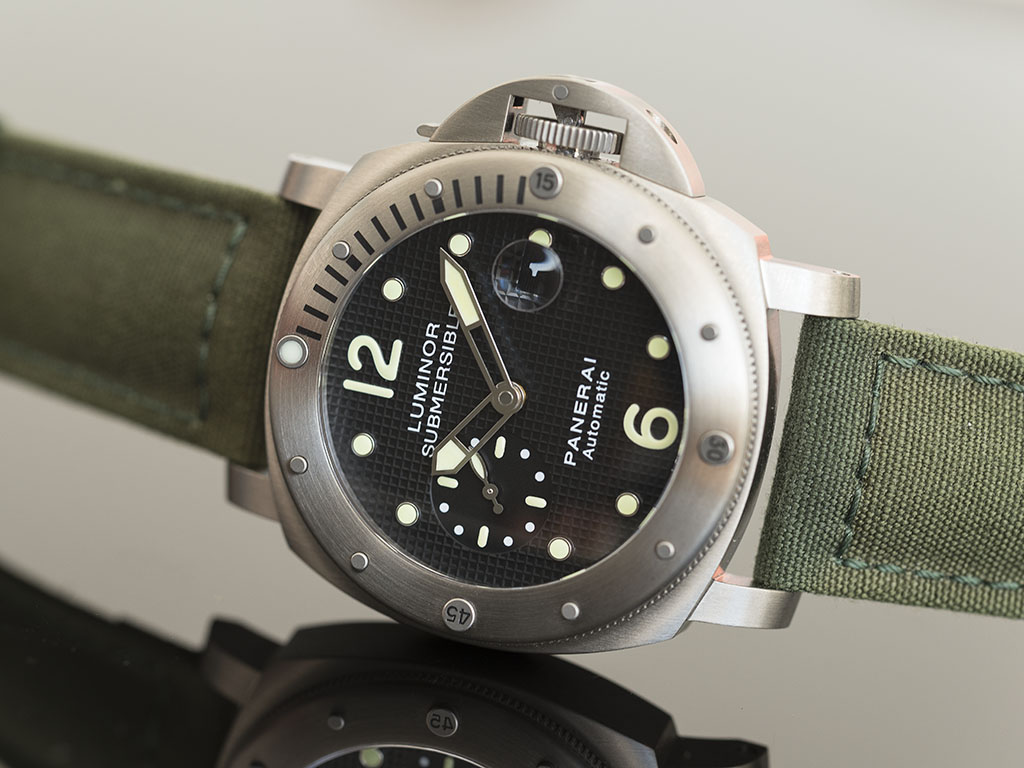 Inside you will find the brand’s good old movement OP lll often referred to as Panerai’s workhorse. The automatic calibre is based on a Valjoux 7750-P1 and offers 42 hours of power reserve. 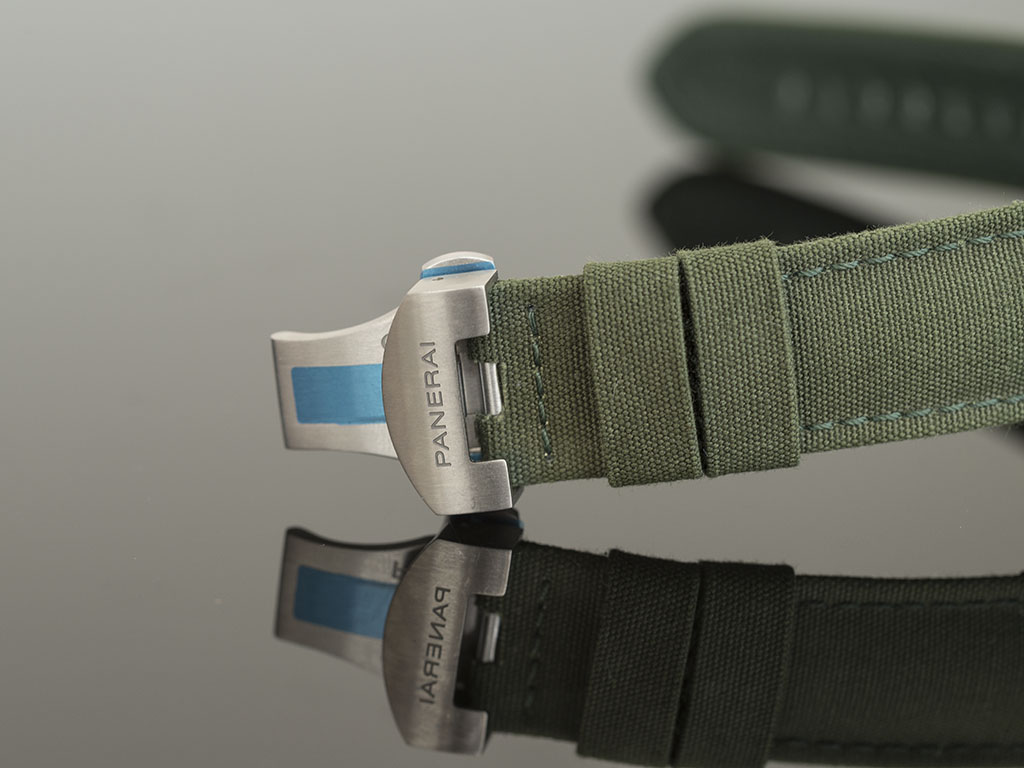 Despite the 7750 being a chronograph calibre, it was used without the chrono function. One little thing about the movement is that you might be able to hear the winding rotor while rotating.

The watch was originally introduced with a rubber strap. This was Panerai‘s first attempt to equip one of their watches with this option and for us it definitely works.

This piece however, is wearing a canvas strap, which we think compliments the titanium case and textured dial just as well if not better. For diving we still recommend the rubber strap in case you need to make quick adjustments. 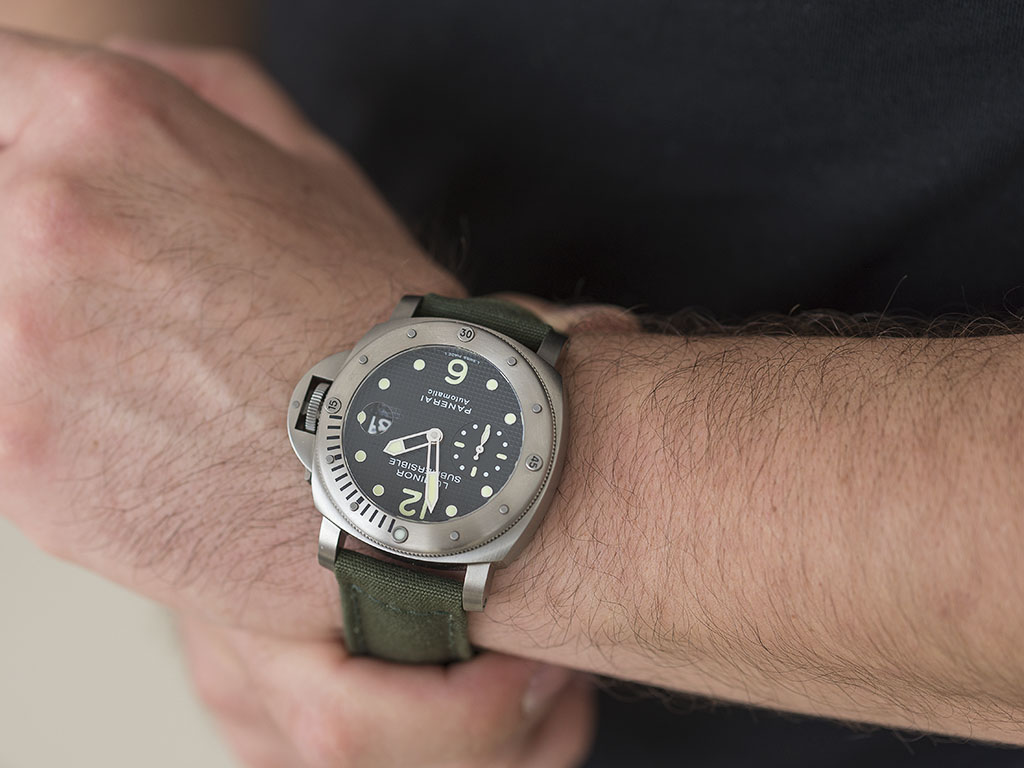 As you already know the PAM0025‘s production ended in 2013, but if you are lucky you might still find one of the last few pieces at your local authorized dealer.

Priced at 7,300 euros this watch takes its place among the brand‘s entry-level offerings. This being said it is a hell of a Panerai, featuring most of their signature characteristics.

We recommend you to check out this model if you are looking into diving watches or interested in some of Panerai‘s signature offerings.