One of the important players within the luxury watch sector Officine Panerai divided its brand followers with the released models PAM00348 and PAM00350 in 2010 into two.

Before the 2nd World War the brand was known by supplying the Italian Royal Navy with watches and until today it was known by producing simple models. Due to the advancing technology and the rapidly increasing competition in the sector the company had to take internal reforms.

In those years, Panerai moved a few steps away from the brand DNA and manufactured a calibre with the mostly famous and favourite Tourbillon movement. Since 2007 this calibre known under reference number P.2005 was used in several models, which were released in limited edition and had a big success with each of them. 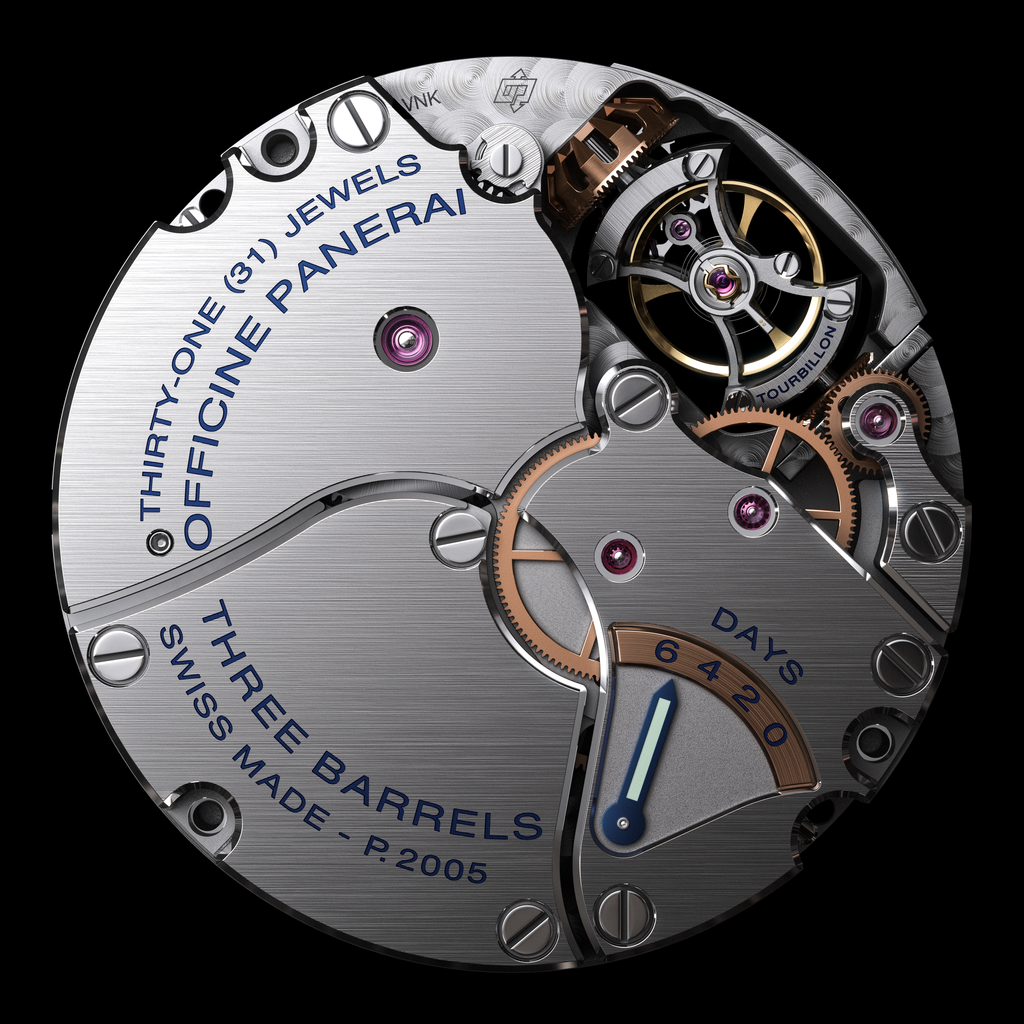 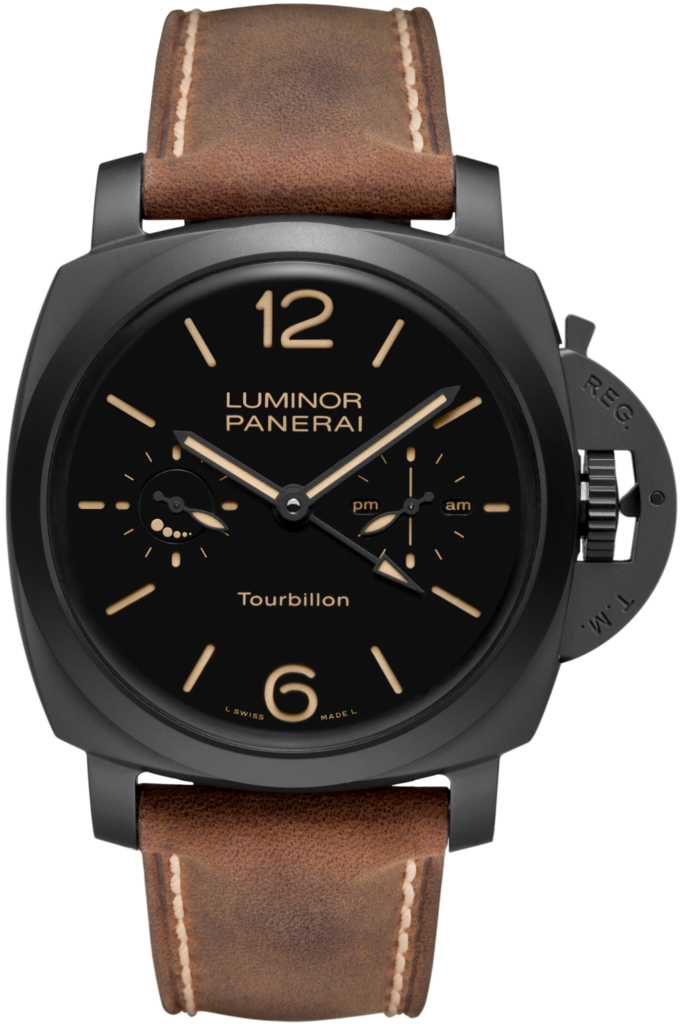 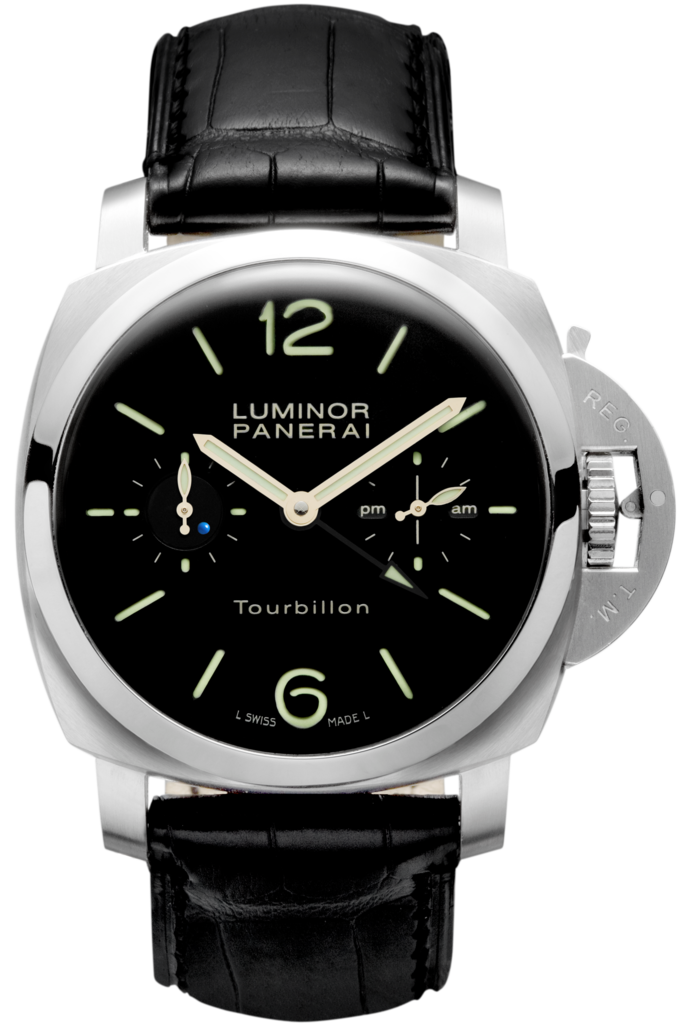 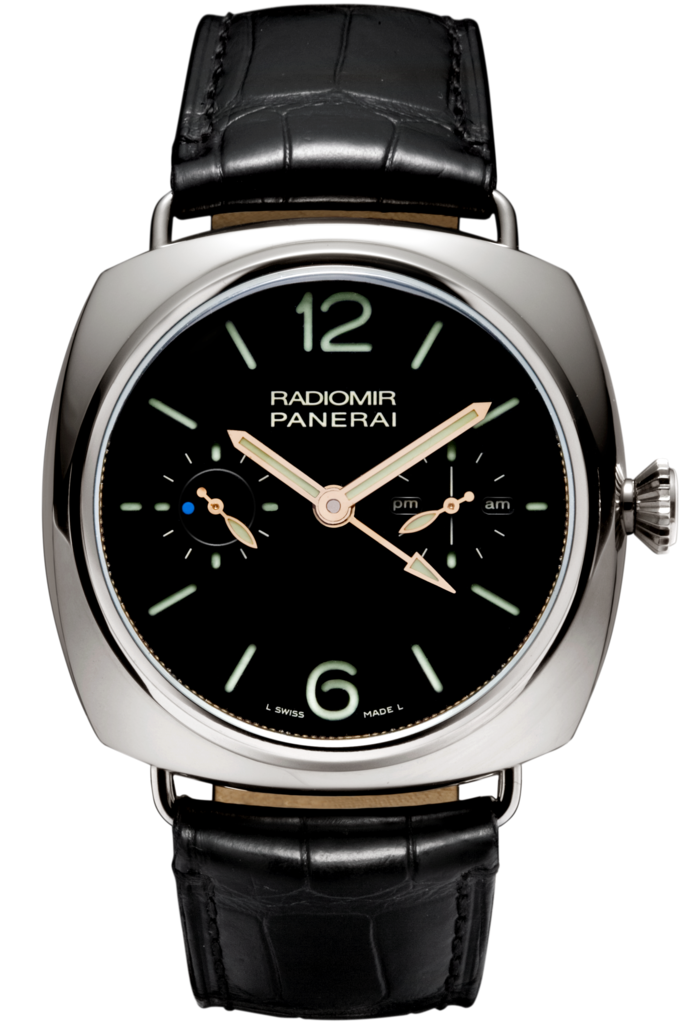 To reinforce the success and to raise the quality level, Panerai manufactured in 2010 the basically same but different looking calibre with reference number P.2005/s.

Each watch model with the 48 mm Radiomir cases equipped with this calibre made of ceramic are absolutely artworks. 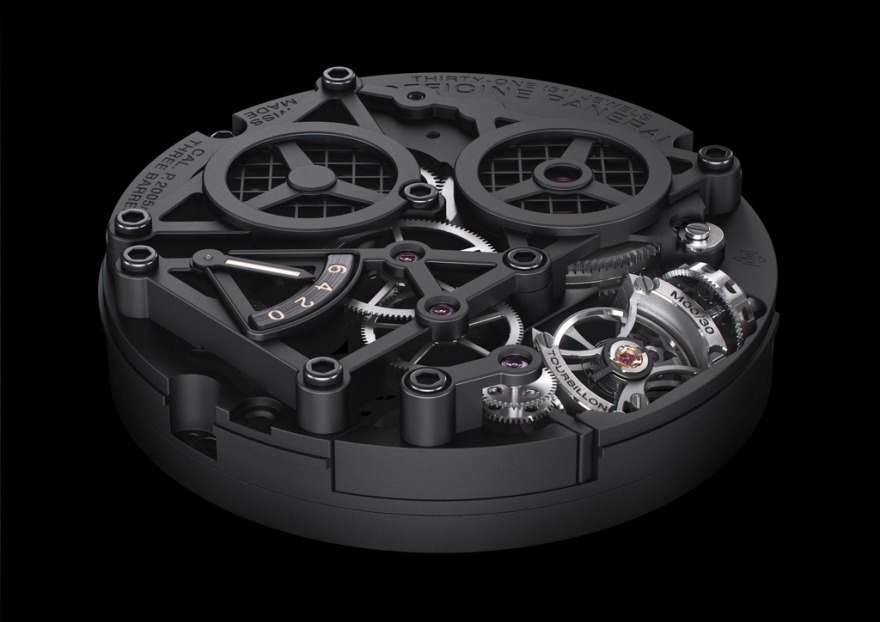 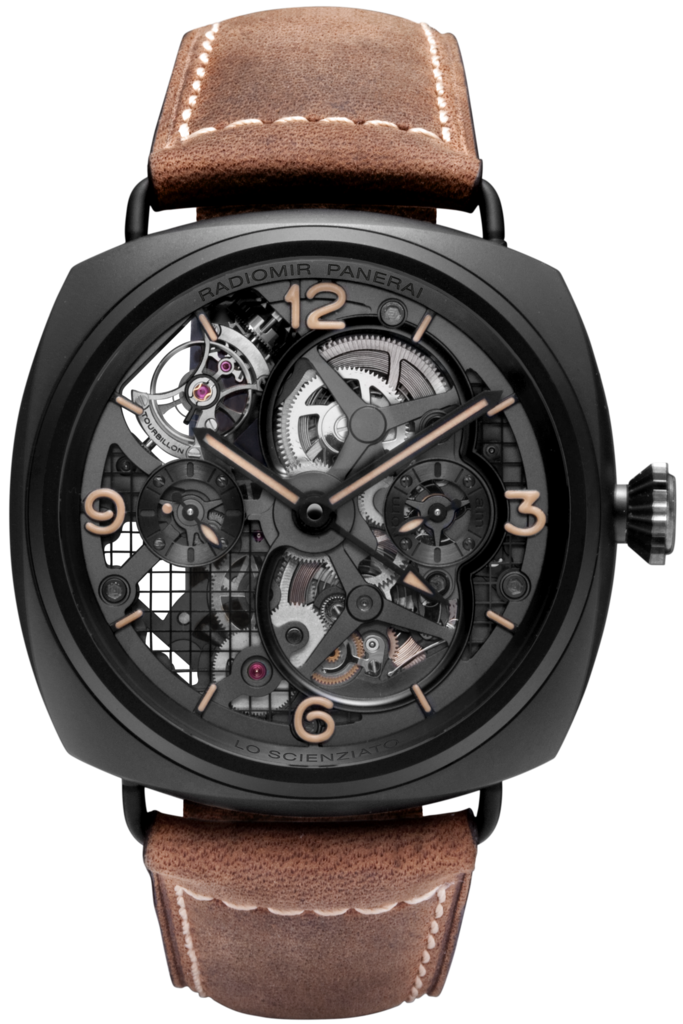 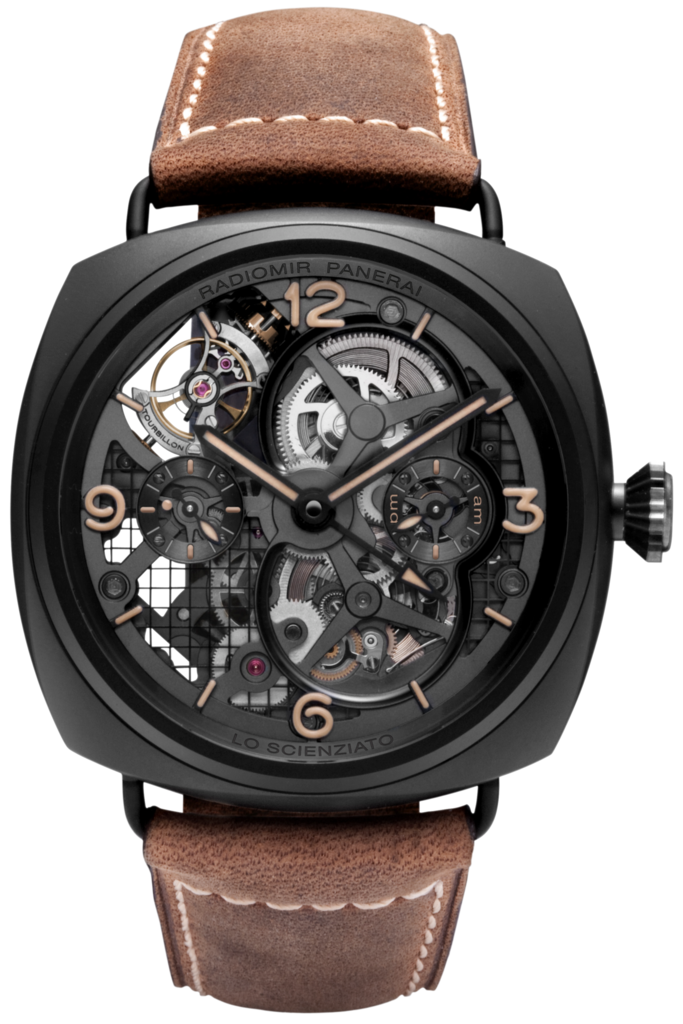 In 2012 another timepiece in unique edition manufactured with the same Tourbillon concept was released. This model was introduced with the reference number PAM00528 and presented again with a 48 mm diameter ceramic case but this time the case type was Luminor 1950. 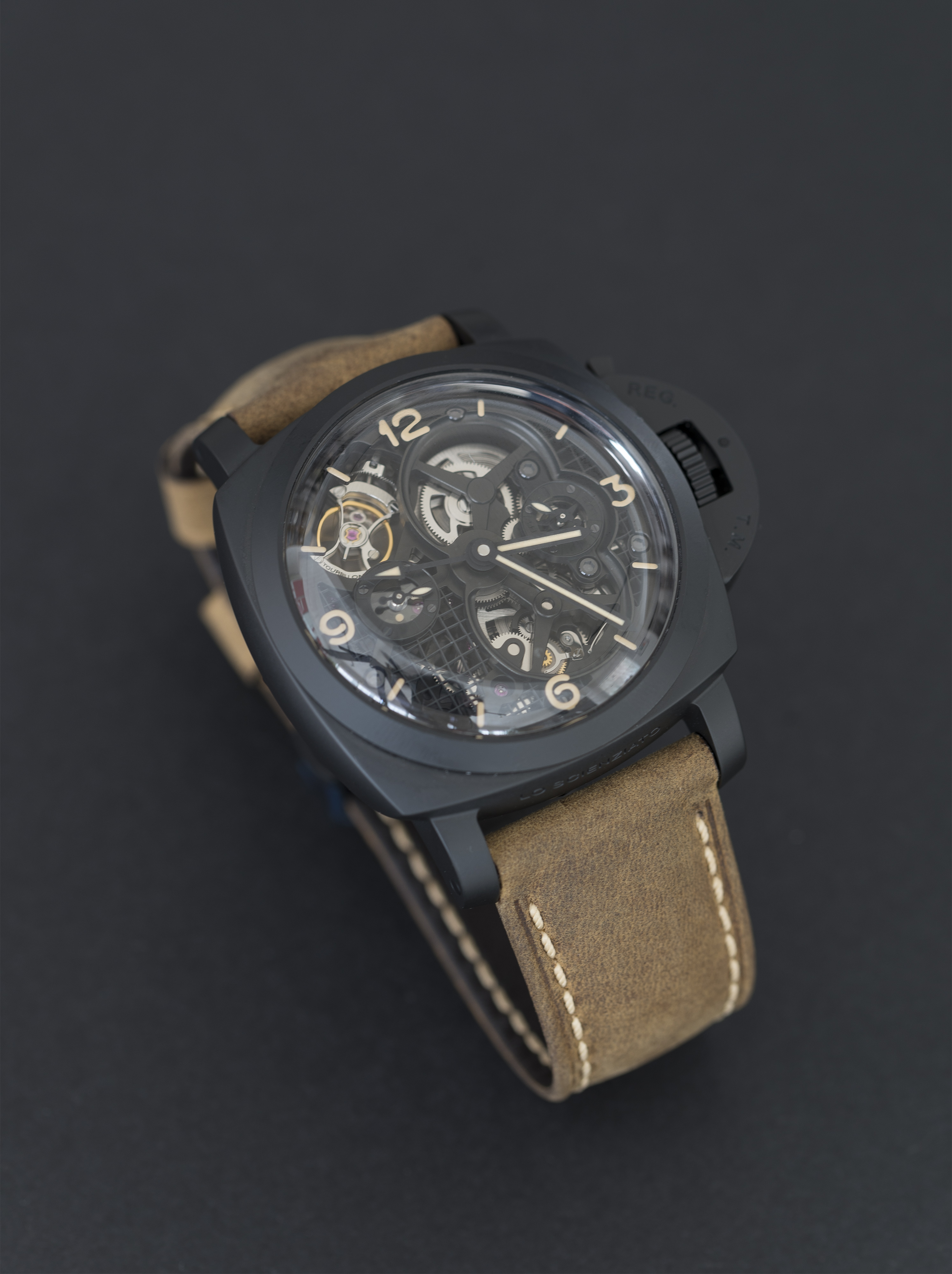 Not long ago, we had the chance to analyse this watch, which was limited with only 150 units. Seeing the box only was firstly a reason for us to think what a beautiful and important timepiece will expect us in it.

We will absolutely not exaggerate saying that it was breath-taking when we opened the box. 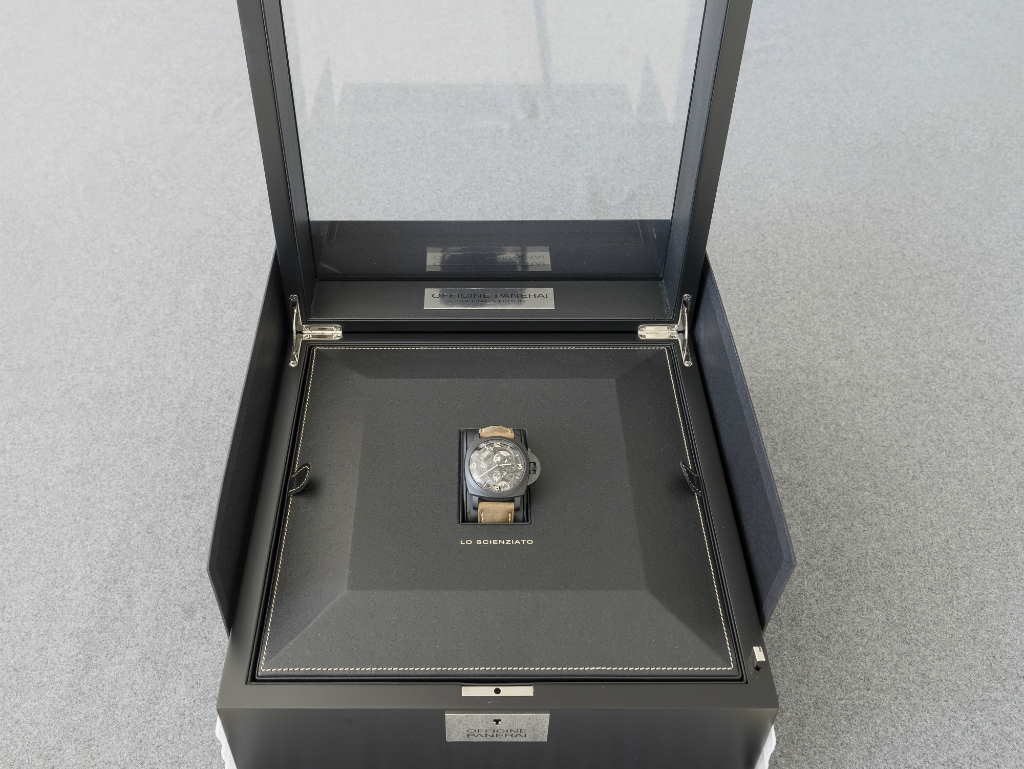 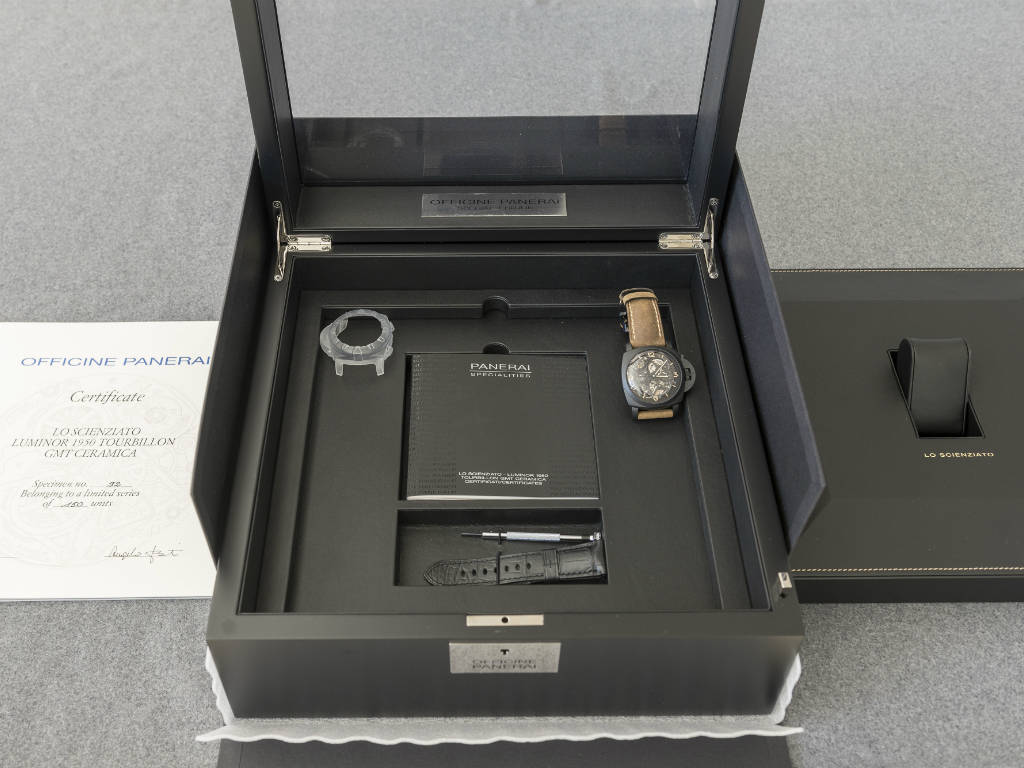 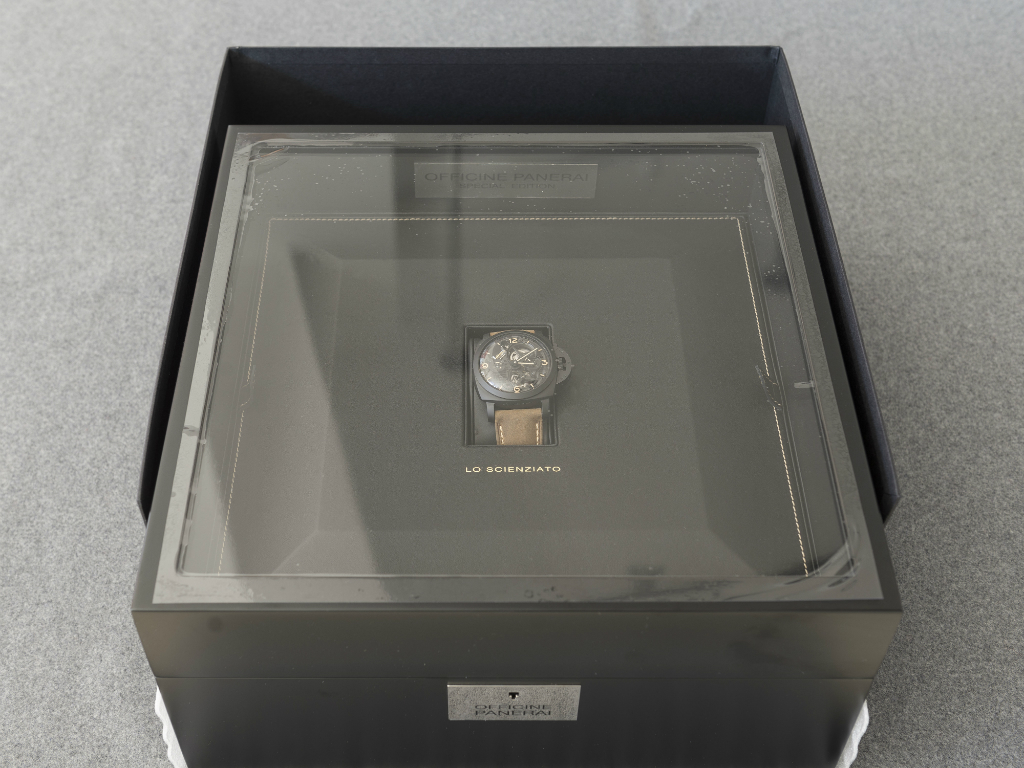 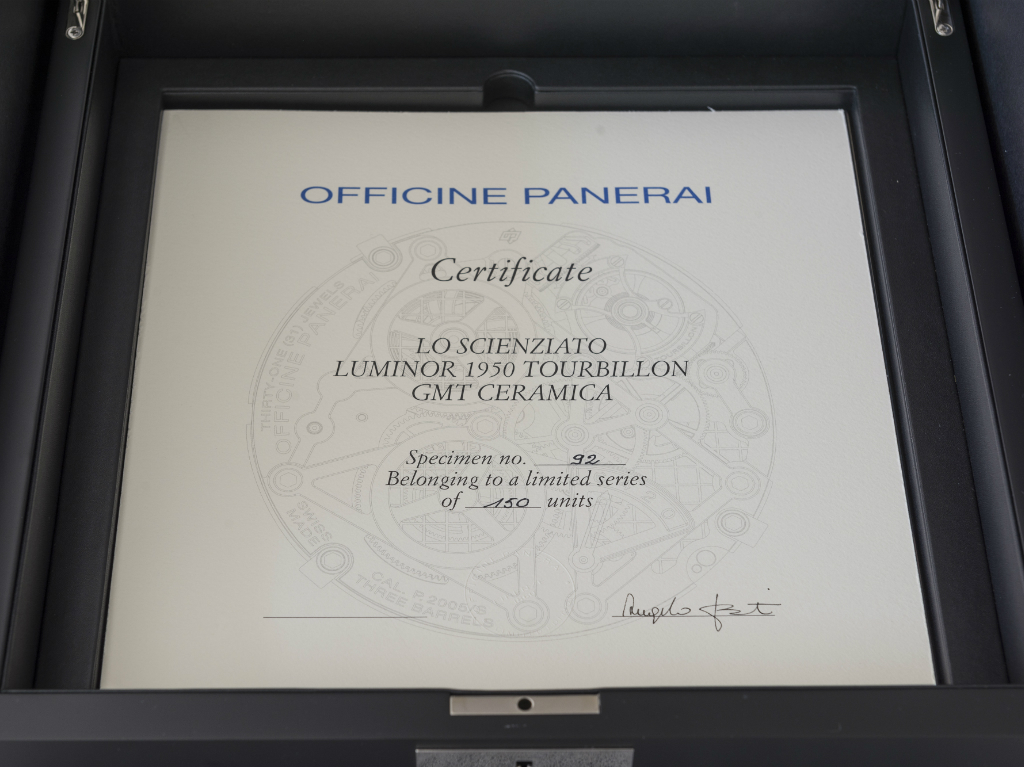 An excellent workmanship combined with an innovative technology created an irresistible attractiveness. The quality can be felt already from far away when you put PAM00528 on your wrist, the comfort gets the best mark by us. 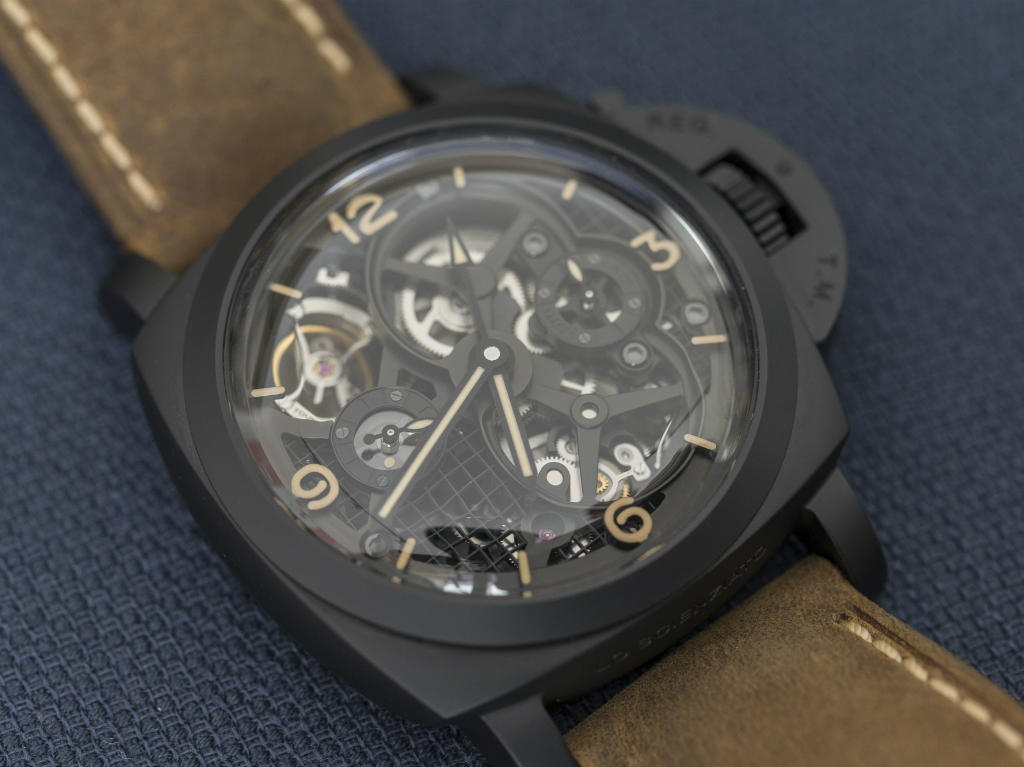 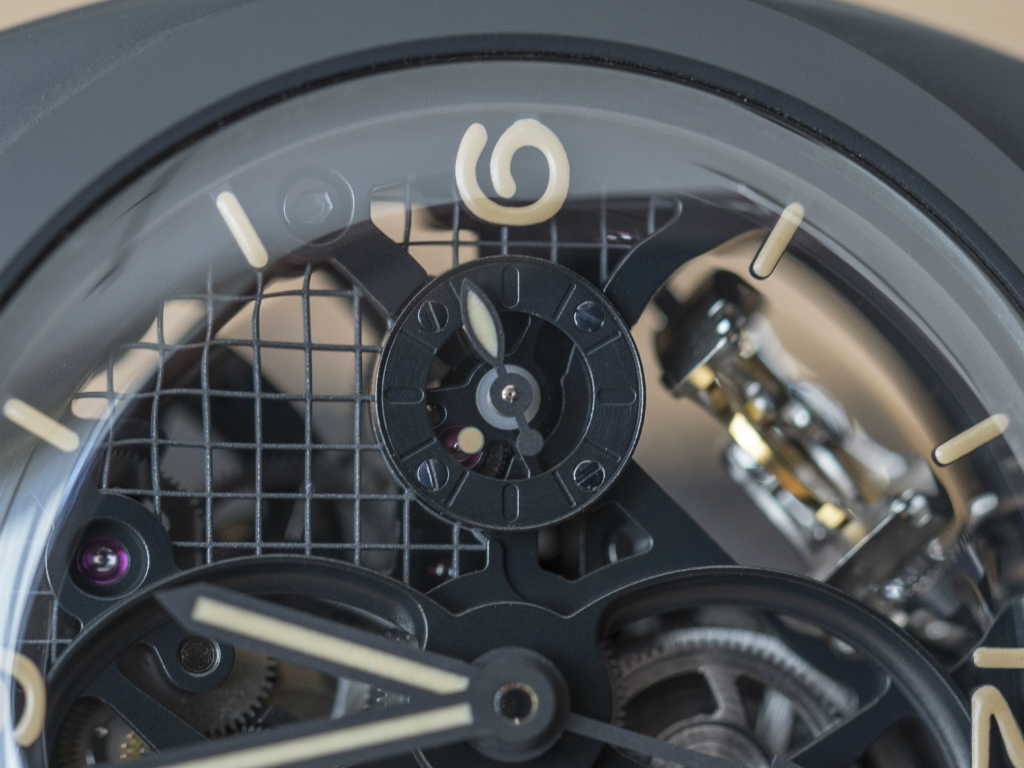 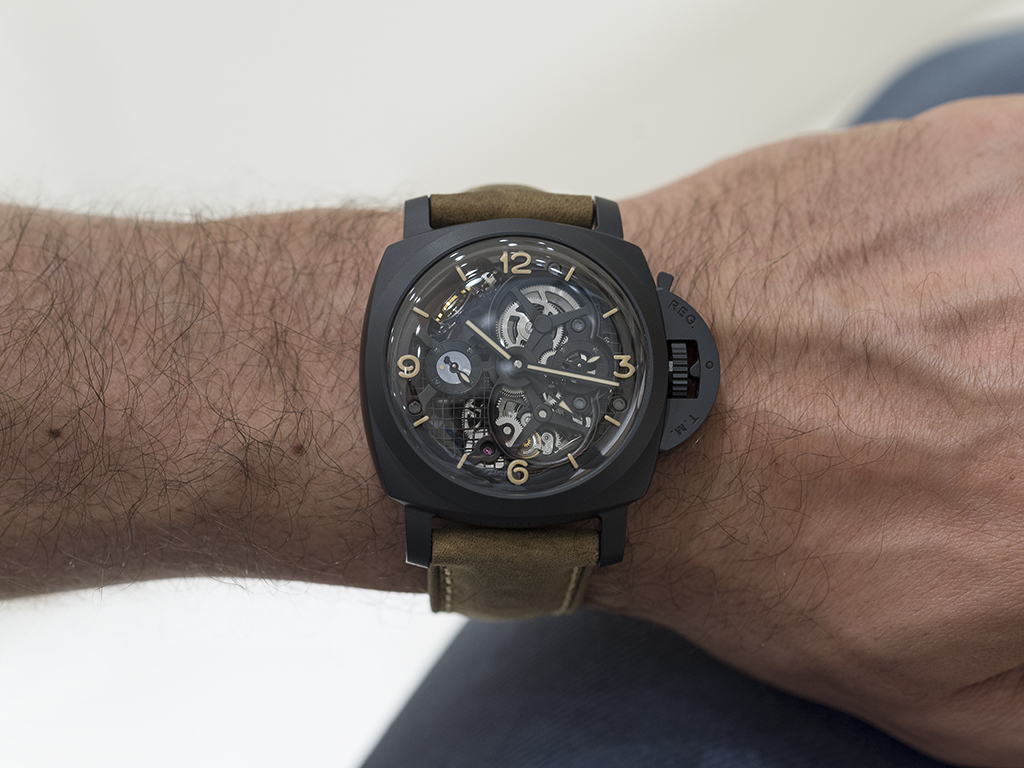 With a power reserve of 6 days the calibre is visible from the front and from the back side of the watch. The importance placed into the details is in some way a justification of the high-price tag. 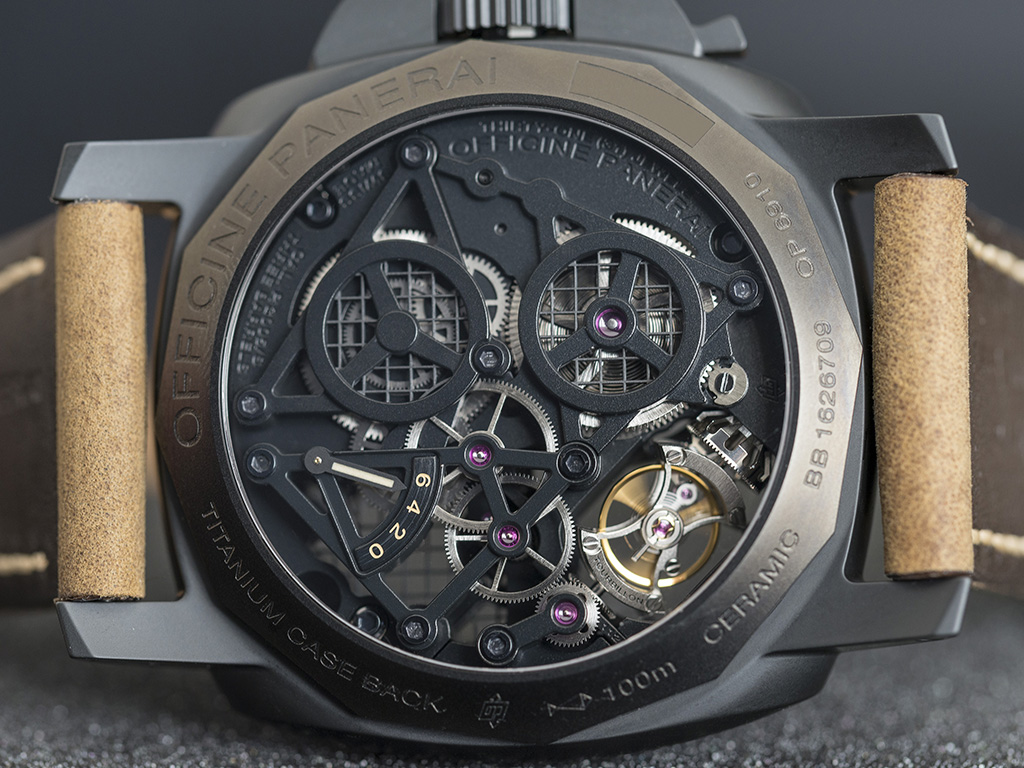 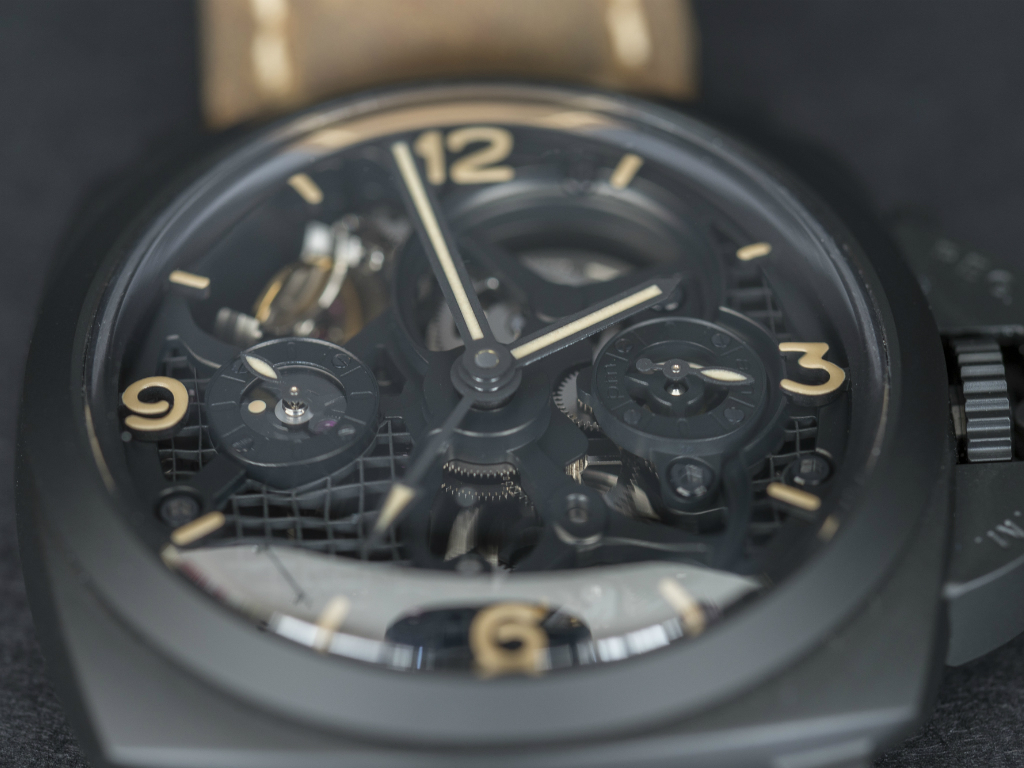 The watch with GMT function has with its ceramic case a modest view and can be exceedingly convenient for daily use.

If your wrist is not too small you will be able to wear the 48 mm diameter case without disturbing your eyes. Another very important characteristic of this watch is that due to its high-grade scratch resistance it will stay as attractive as it was on the first day. 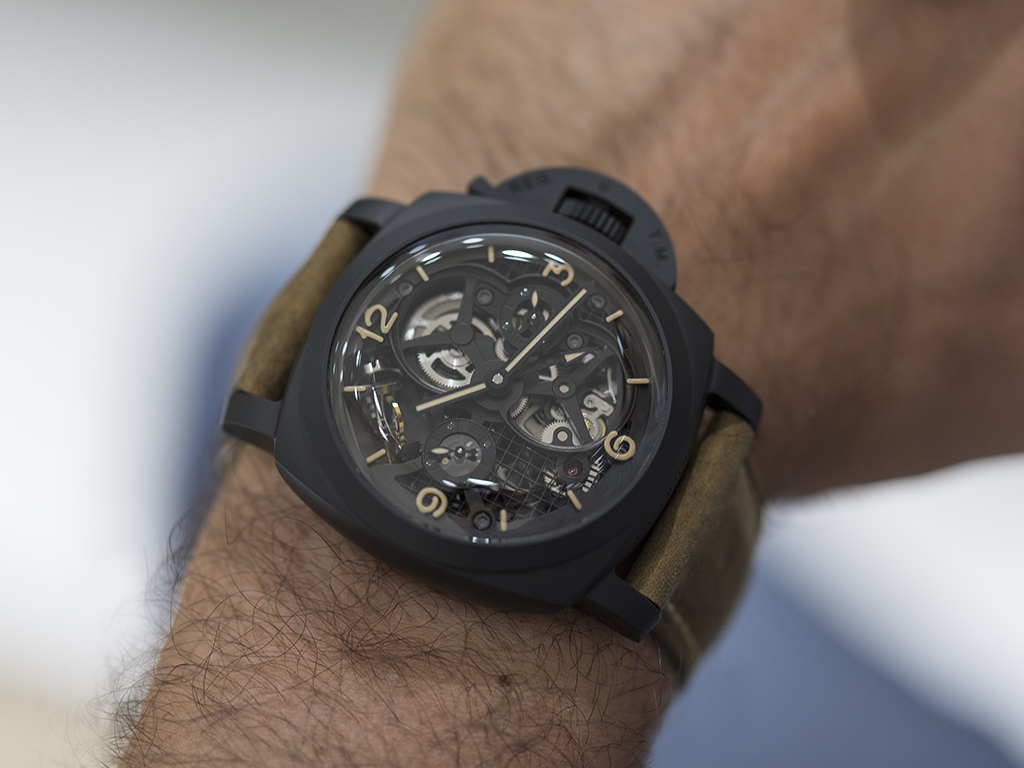 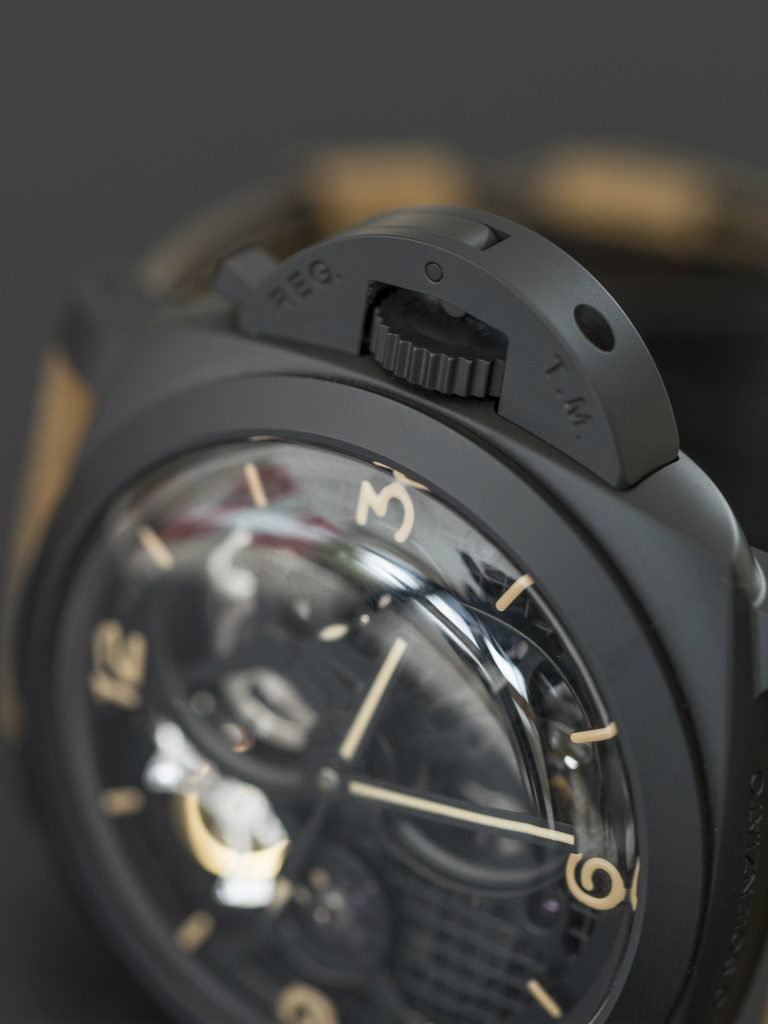 The Tourbillon mechanism, which can be seen through the case back, is helping to ensure greater accuracy by completing two rotations a minute. The GMT hand of the watch showing the second time zone and the day/night indicators seem to be lost into details but are still quite functional. 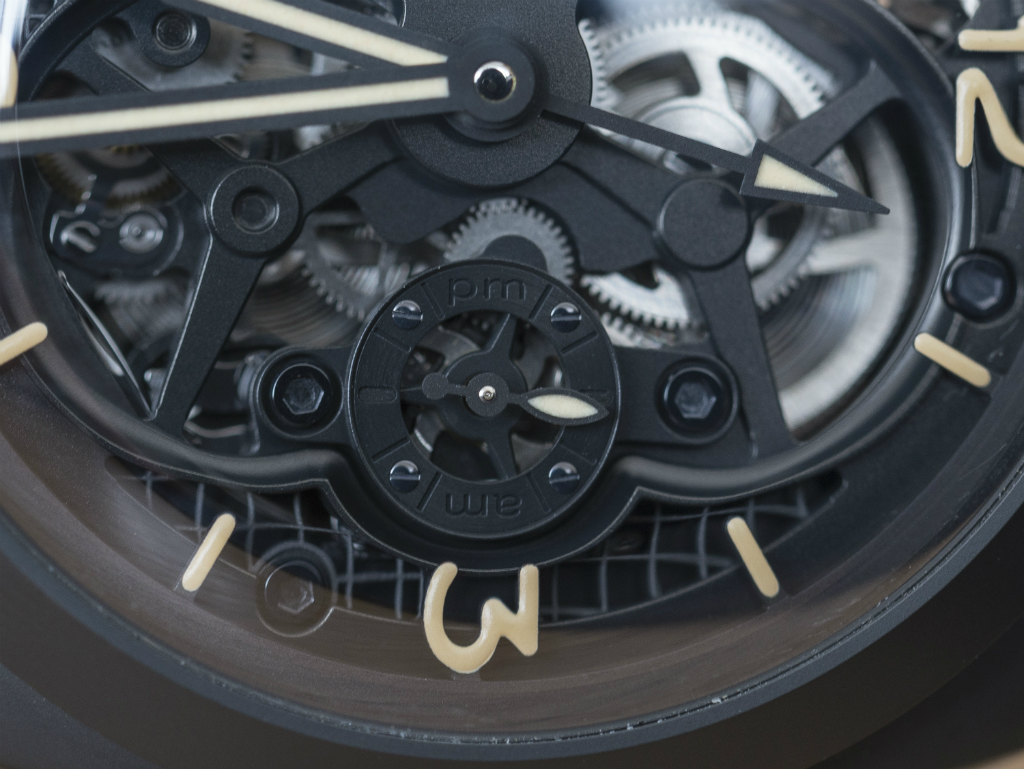 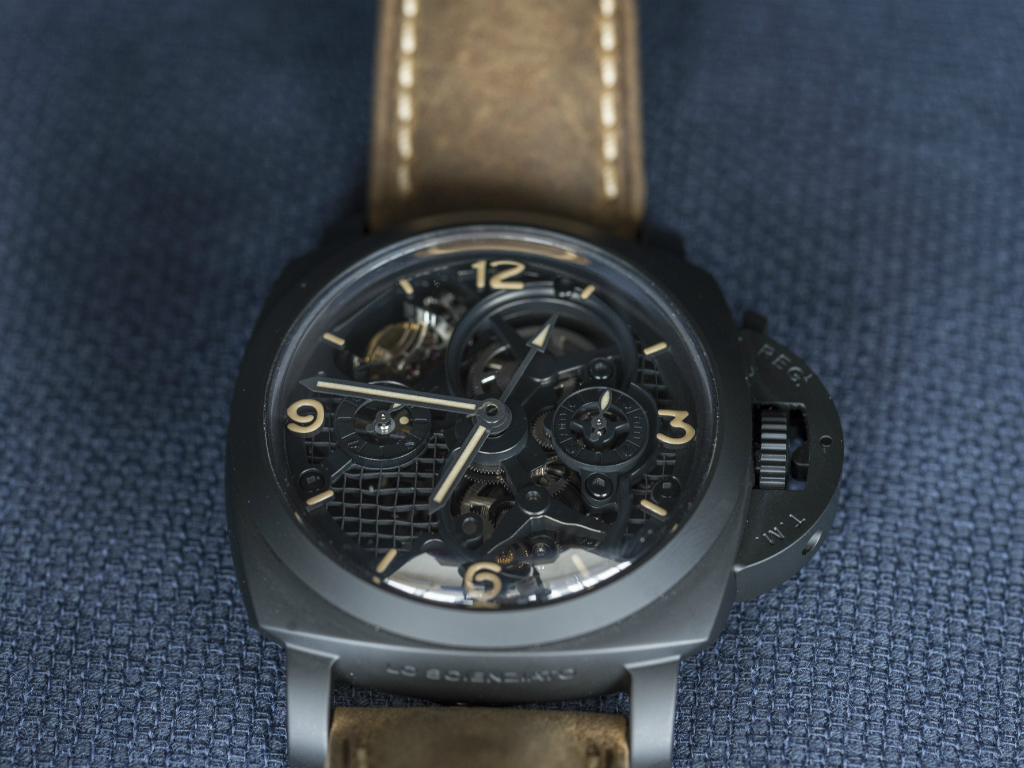 The power reserve indicator on the back of the hand wound mechanism is a functional feature too. To reach the maximal power the wind up process takes a little while. 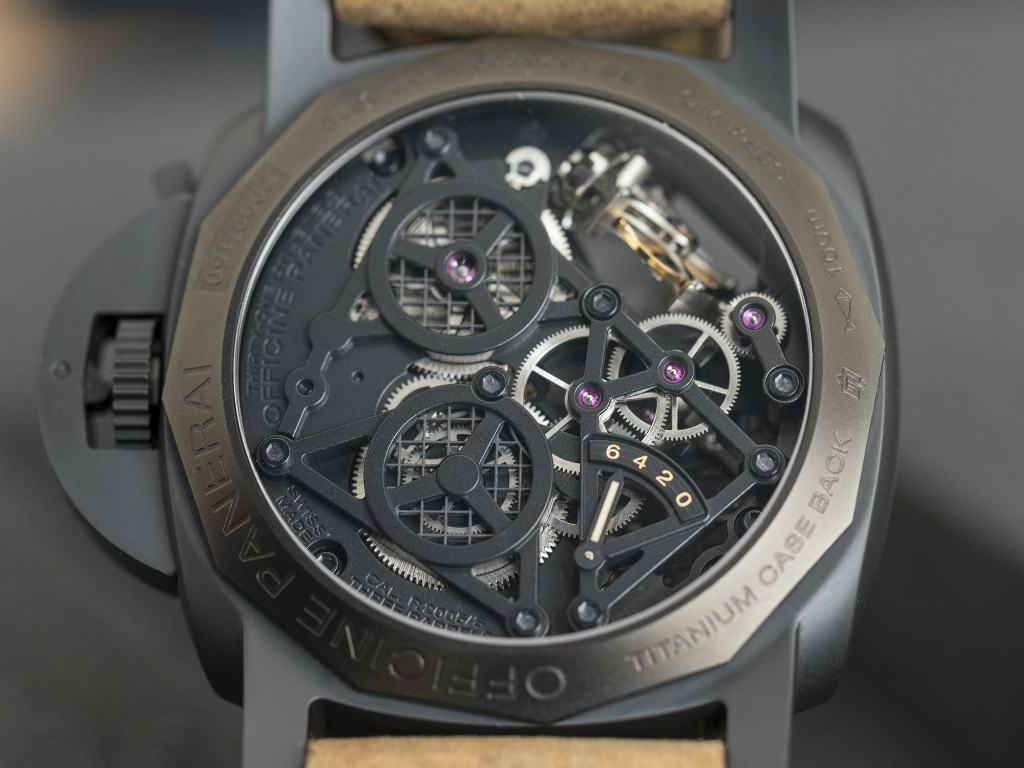 After our long-time analyses the only disadvantage we can mention is that you will have problems to store the watch box with its rich contents, which is excessively large.

As a result we can say without exaggerating that the PAM00528 is one of the top ranking and excellent watches we had the chance to analyse up to now.

150 units for such a watch seem too many in the first instance but due to information we got almost everyone was sold within a short period and only very few of them are still waiting their new owners in the boutiques.

We would like to express many thanks to the Panerai family giving us the chance to analyse such a timepiece and are hoping to get together again in future for new reviews.