While the World War II was going at it’s fiercest, Officine Panerai was still producing timing insturments for Italian Navy ( or Marina Militare as we all feel cooler when saying in Italian ).

As of 1943, the Italian manufacturer decides to design a chronograph ( which is a first for Panerai back then ) for the deck officers.The caliber planned to beat inside the massively sized stainless steel case ( with it’s 52mm diameter ) was supplied by the famous watchmaker atelier “ Angelus ”.

Panerai decides to call the big watch “ Mare Nostrum “ ( translates “our sea” in Latin ) which is a well known phrase used by the ancient Romans for naming the Mediterranean Sea. 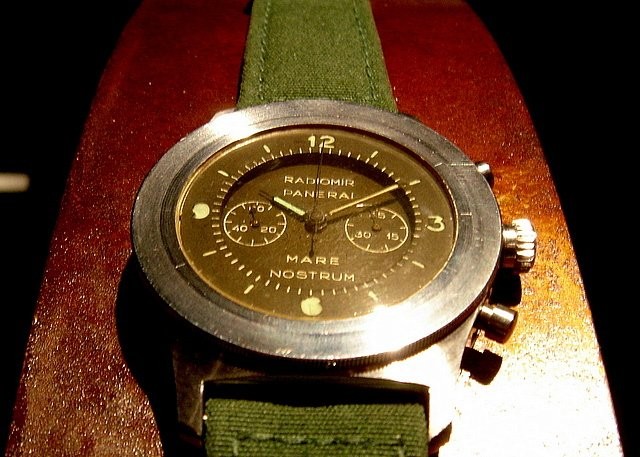 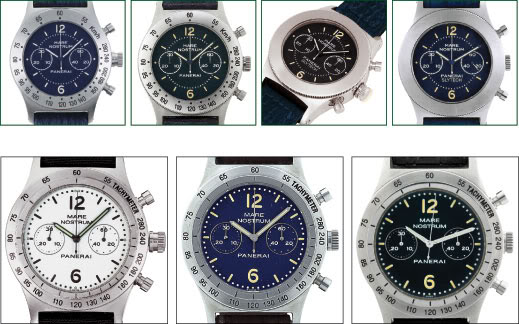 In 2010 Panerai takes a radical call and kickstarts a new Mare Nostrum project under it’s sub product group Special Editions.As all official documents including the specs sheet and hand drawn sketches have been destroyed in a flood, Panerai decides to base the new design on the only left specimen of the original production watch.

After a long R&D period, the Italian watchmaker proudly presents the re-issue version for one of it’s glorious heritage icons: Mare Nostrum PAM300.

Being limited to a conservative figure of 99pcs total production number, PAM300 succesfully reflects the original watch thanks to it’s identical design details with the first Mare Nostrum.

Since it’s practically impossible to obtain the same movement from Angelus, Panerai decides to employ a specially designed, manual winding chronograph caliber from a well know movement manufacturer again: Minerva. In order to make it possible to see the beautifully finished caliber, Panerai grants it’s fellow Paneristi by placing a see thru case back. 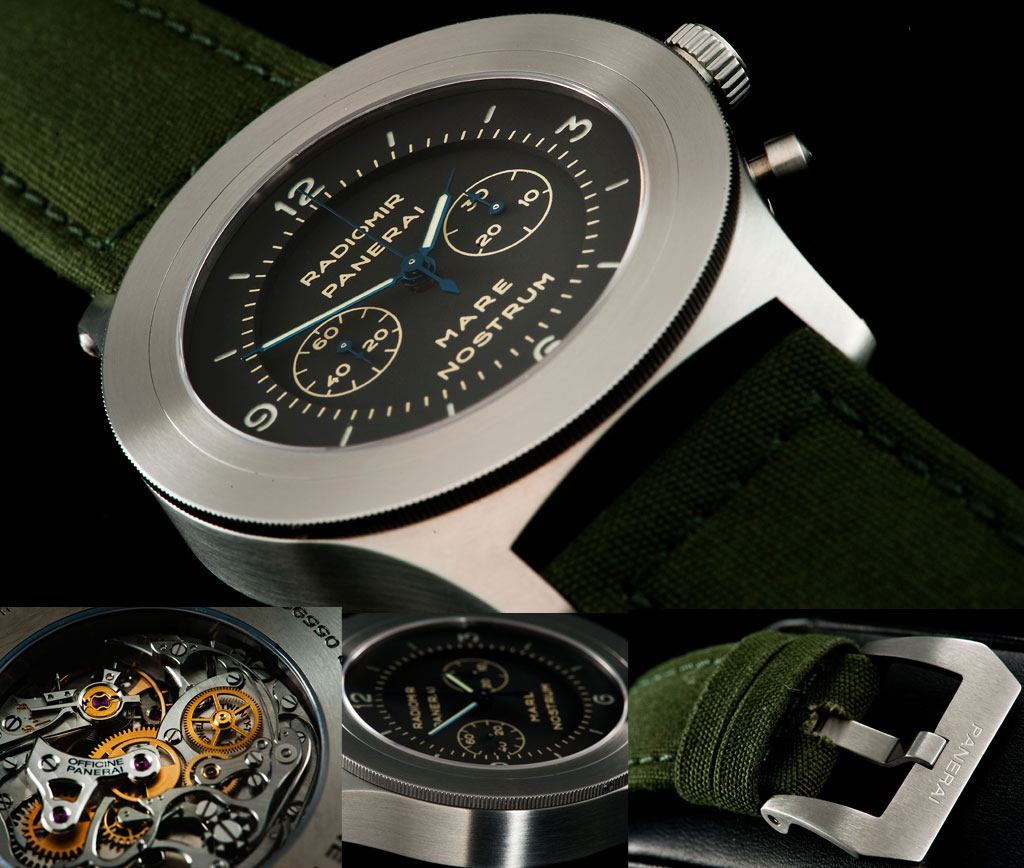 The green canvas strap presented with PAM300 immediately becomes a classic and gets it’s proud place in the company’s accessories inventory.

In 2015 Panerai decides to take another shot at the mighty Mare Nostrum.This time featuring notable unsimilarities with the original model, the newest watch gets different critics.

As Horobox Team, we paid a visit to Panerai Istanbul Boutique in order to do the very first live review of this legendary model Ref. PAM00603. 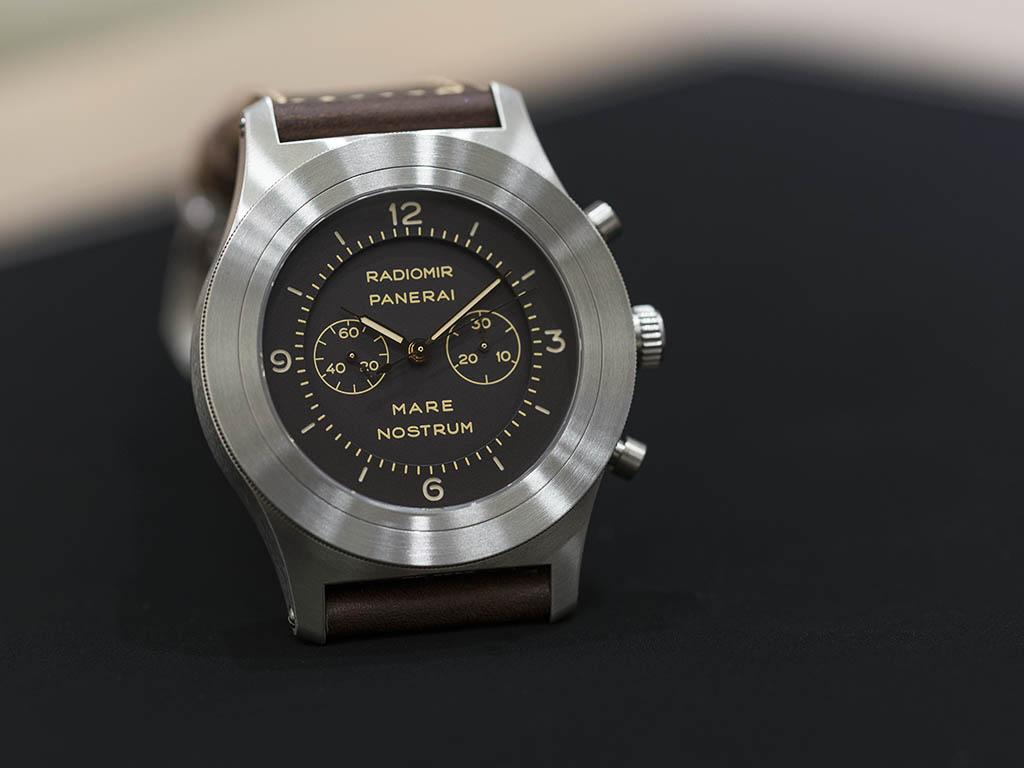 Arguably the most evident difference is the case material.While the diameter stays loyal to the original watch at 52mm, the newest Mare Nostrum’s case is made of titanium instead of stainless.

Although titanium drastically increases the wearability of such a big watch like this, it isn’t always appreciated by the enthusiasts on a traditional, hi-end watch due to it’s unpleasent “ a less valuable watch.. “ feel on the wrist. 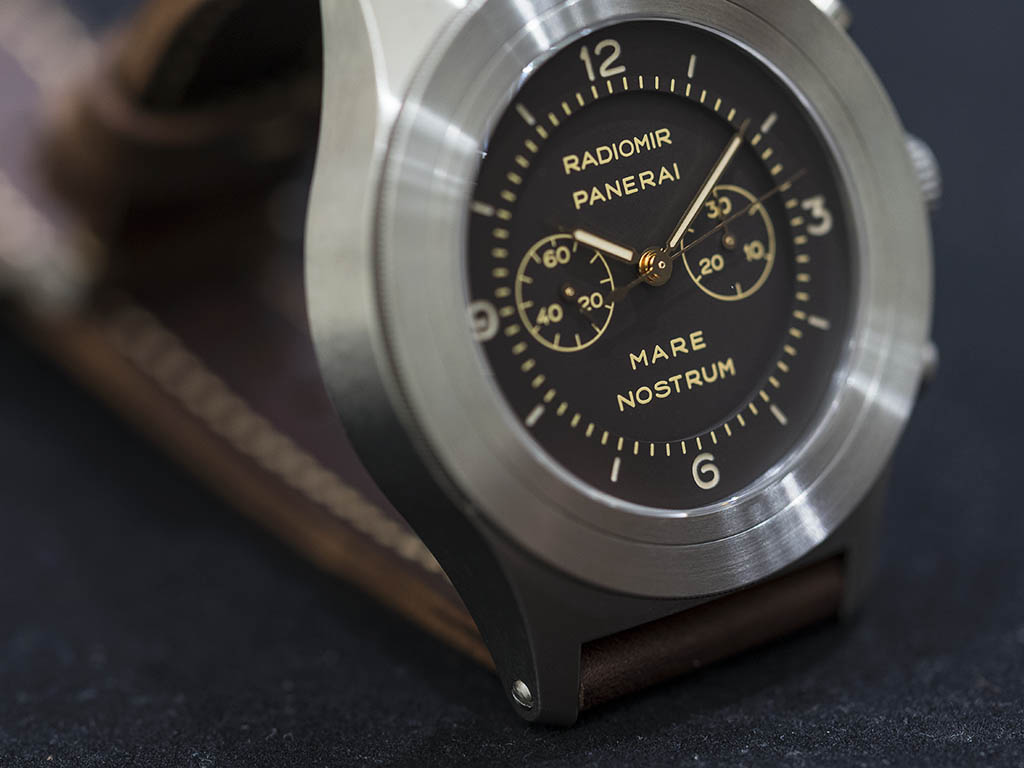 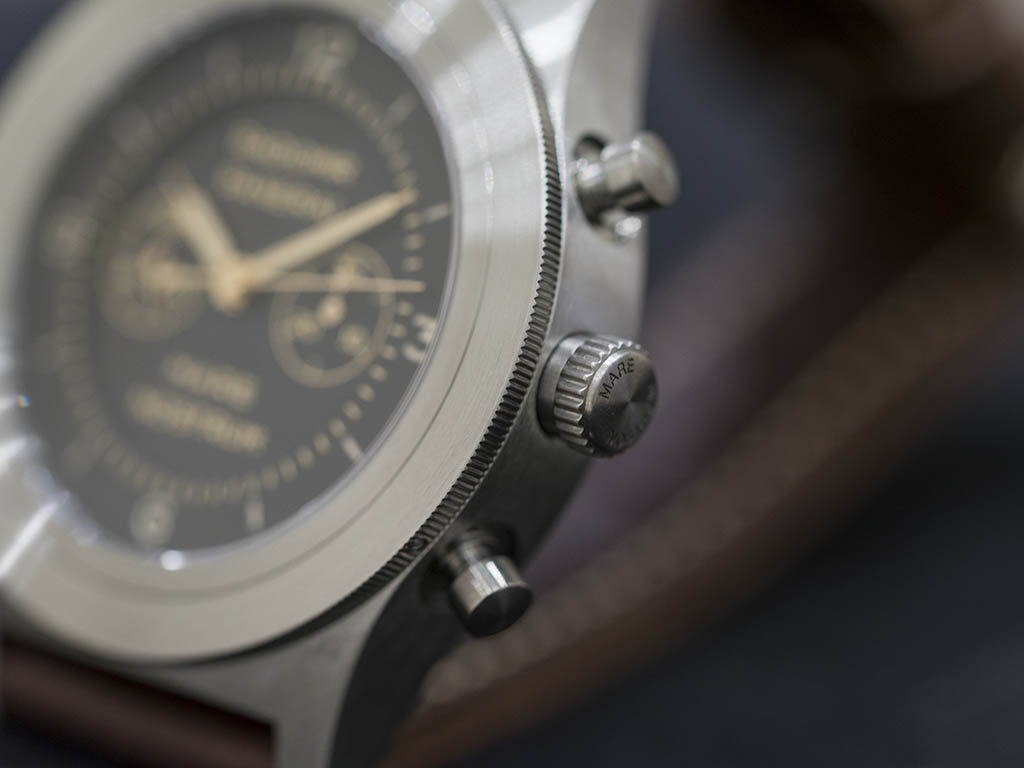 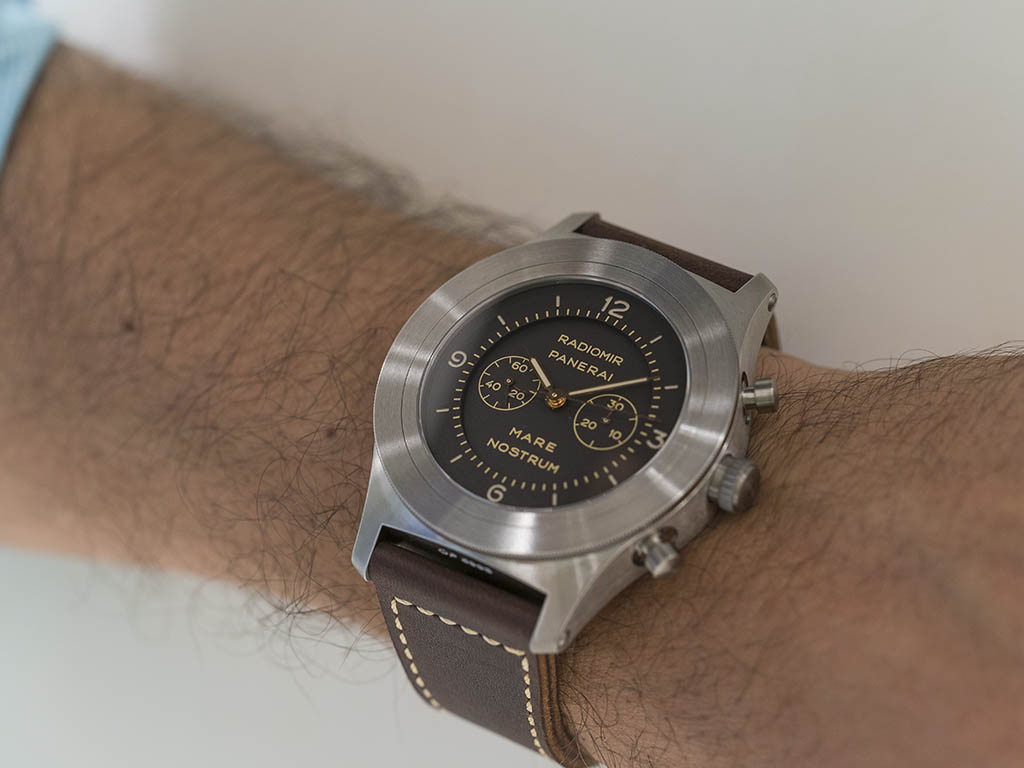 Additionally, titanium is far more prone to scratches than stainless steel making the timepiece look worn out soon on a daily wearing routine.

The engraved reference number on the case looks very nice. 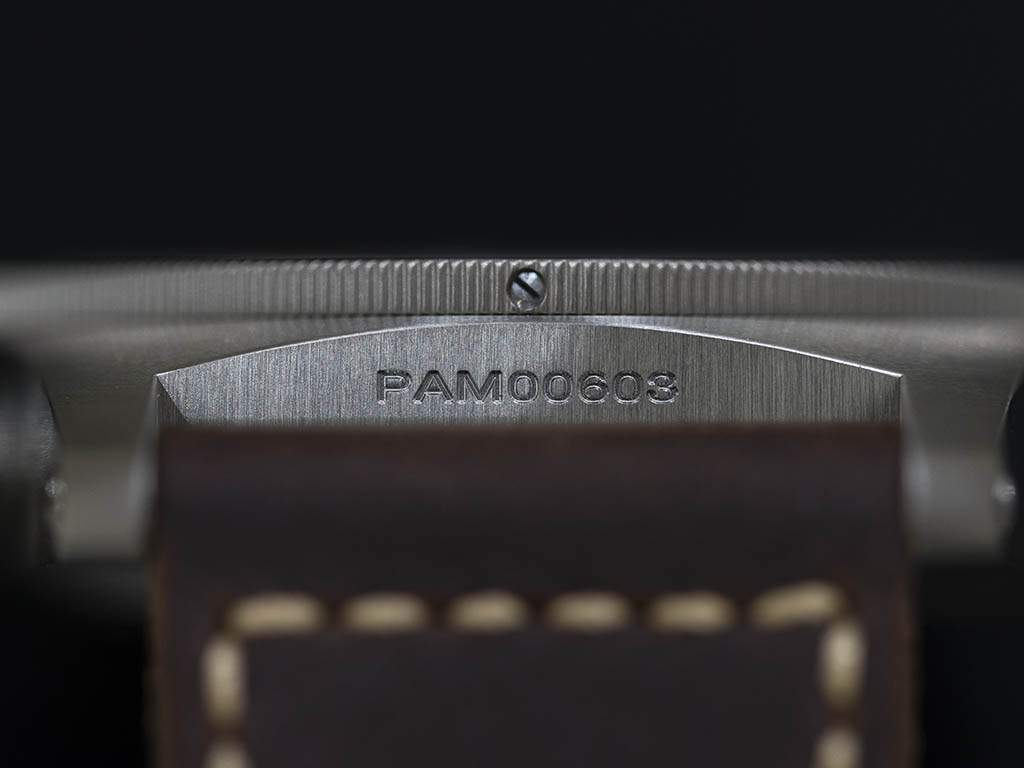 While having a sapphire crystal above the big dial, newest Mare Nostrum now lacks the see thru case back.At first, I thought Panerai cancelled the see thru case back for the sake of having a greater water resistance figure but, at a dissappointing 30M rate I am a bit confused here.Mare Nostrum shows up as a synonym for collector’s item rather than a daily rocker due to it’s massive size therefore higher WR rating may not be necessary, but 30M.. Really..? Err.. 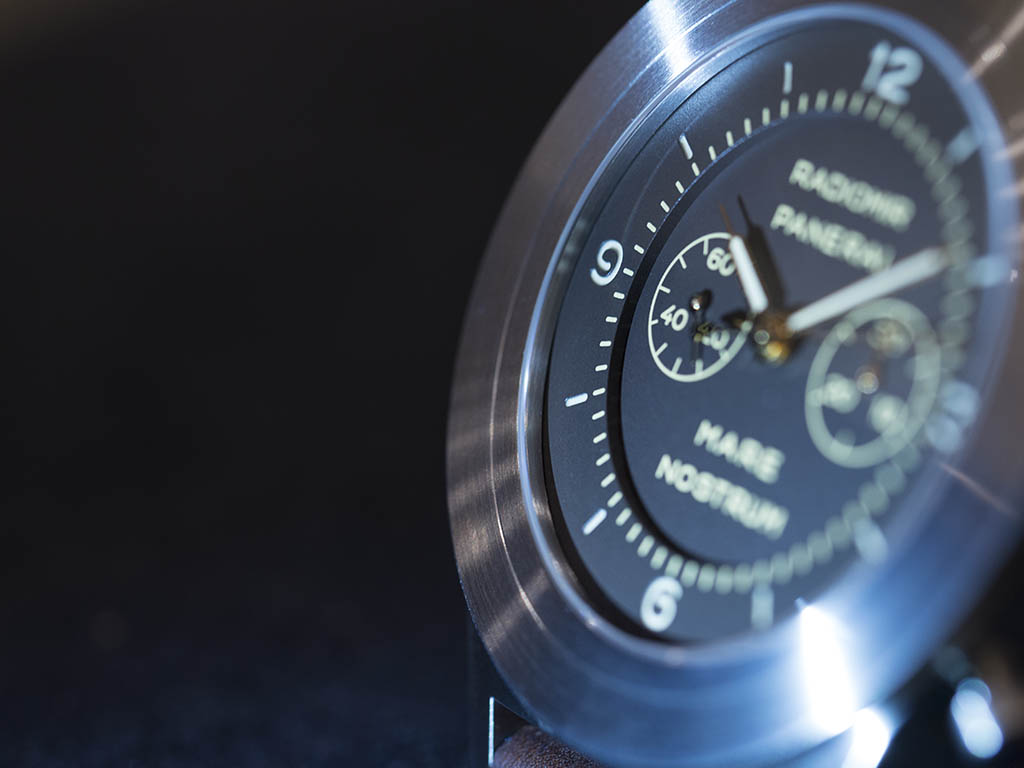 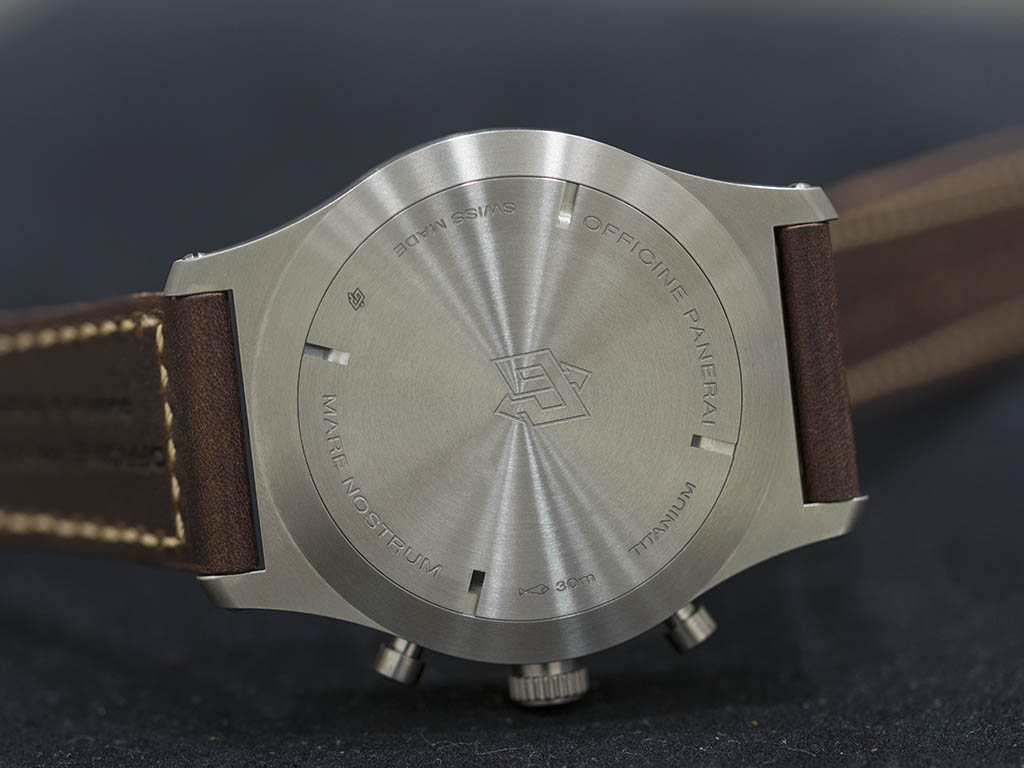 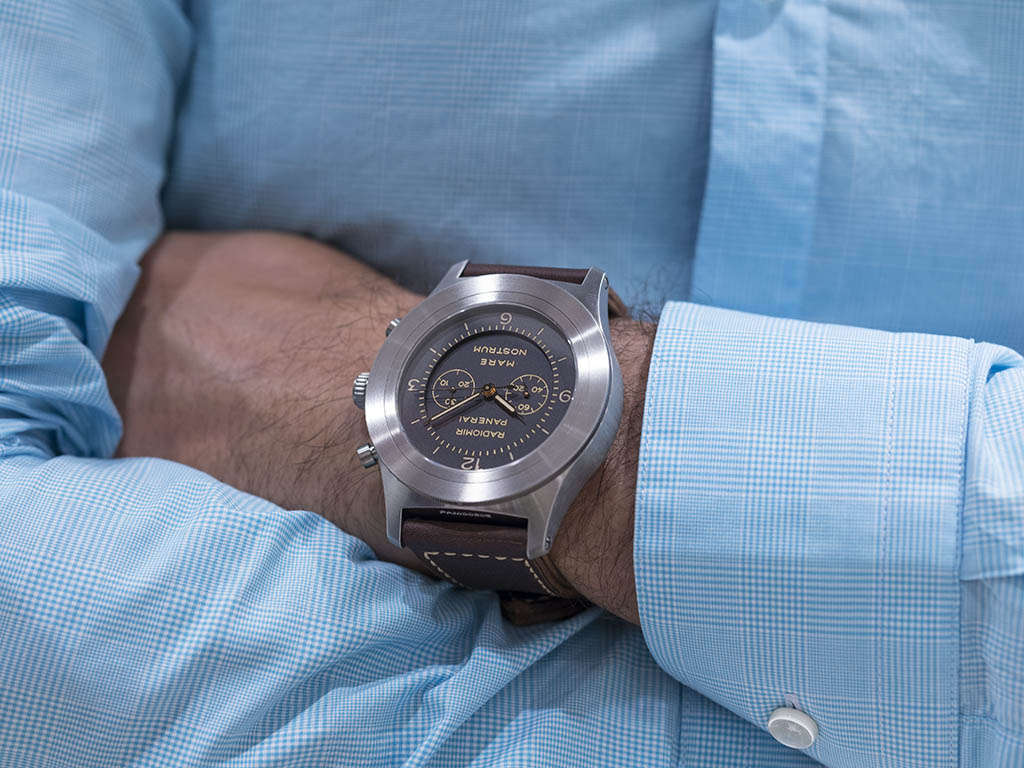 The dial is tobacco colored.A familiar choice for most Paneristi as several Panerai models have the same dial color.The hands are made of gold and they are filled with slightly dark colored luminious material which is possibly preferred in order to fit the retro concept of the watch.

There are a pair of chrono sub dials. Being designed in classic Bi-Compax lay out, both the minute counter sub dial and small second sub dial perfectly match with the rest of the dial. 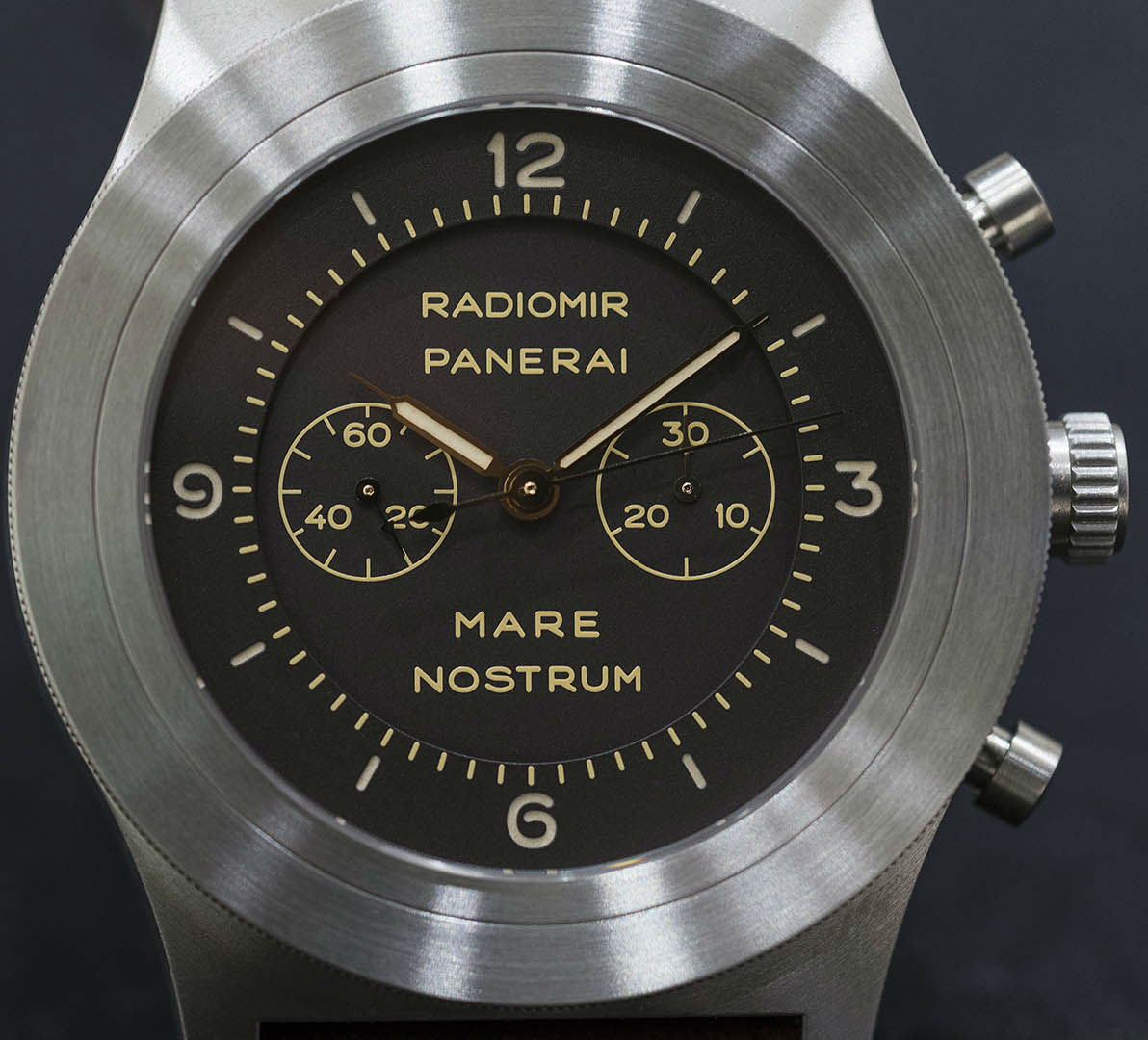 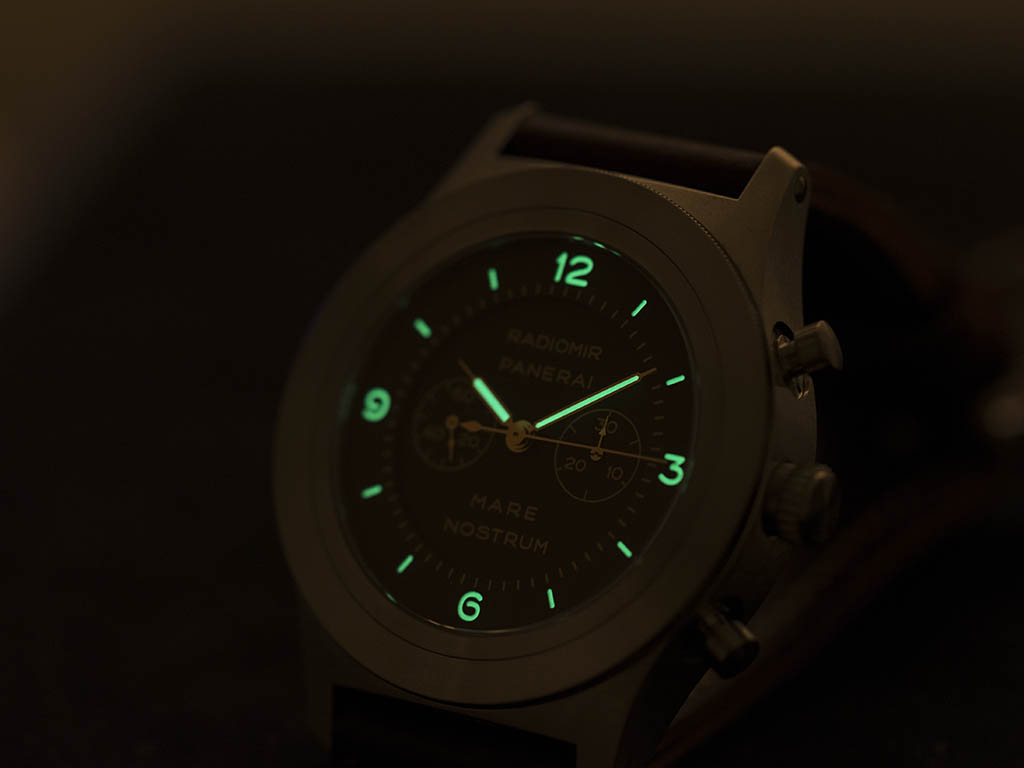 The watch ticks with a Minerva based caliber: OP XXV. 22 jewelled and 18.000vph rated ( identical with the original Mare Nostrum’s caliber ) movement offering 55 hours of power reserve when fully wounded.

While being decorated elegantly, we do not have the chance to see the caliber due to the lacking see through case back. I’d list that in cons section.

The watch comes with an extraordinary special edition box. 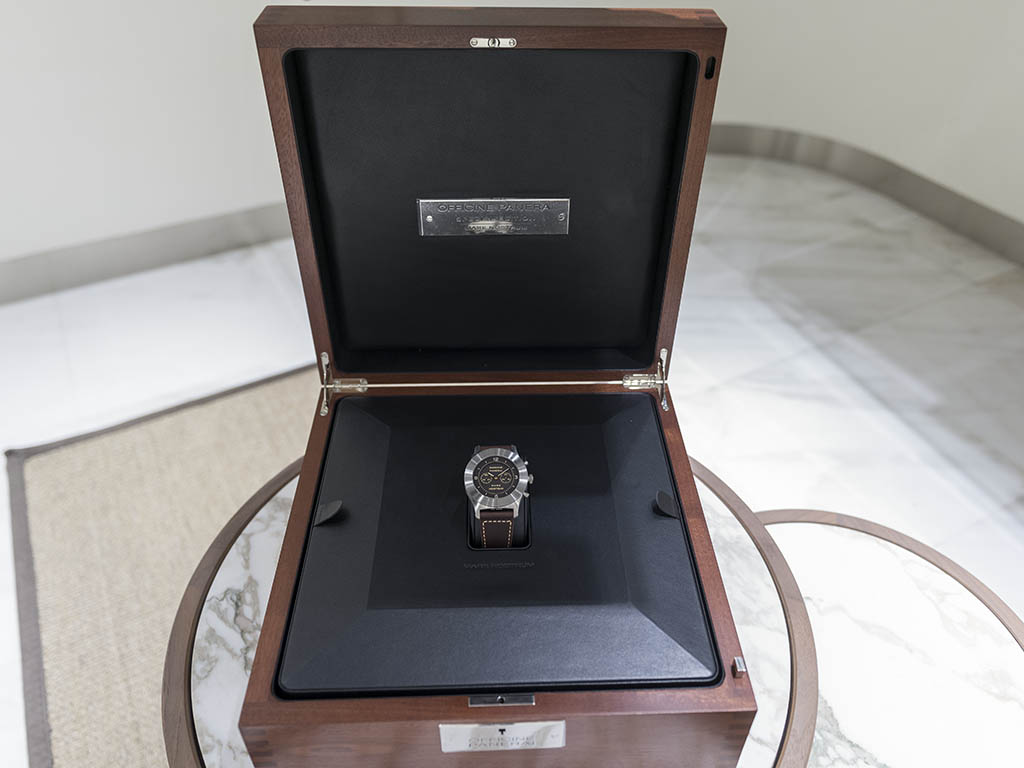 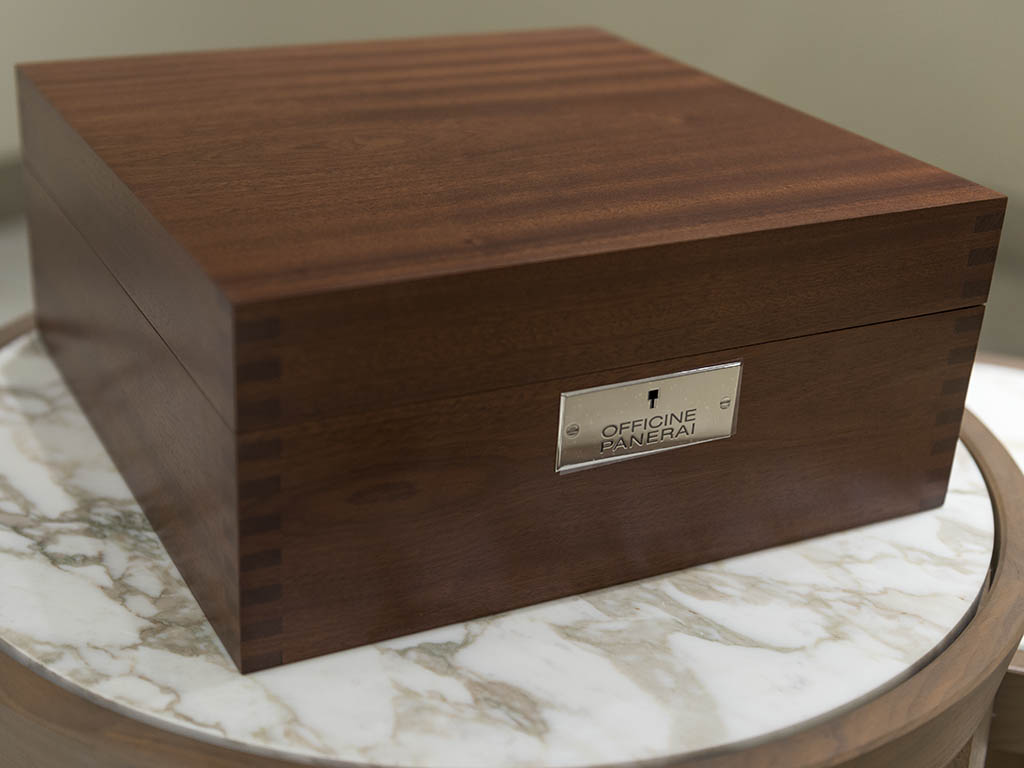 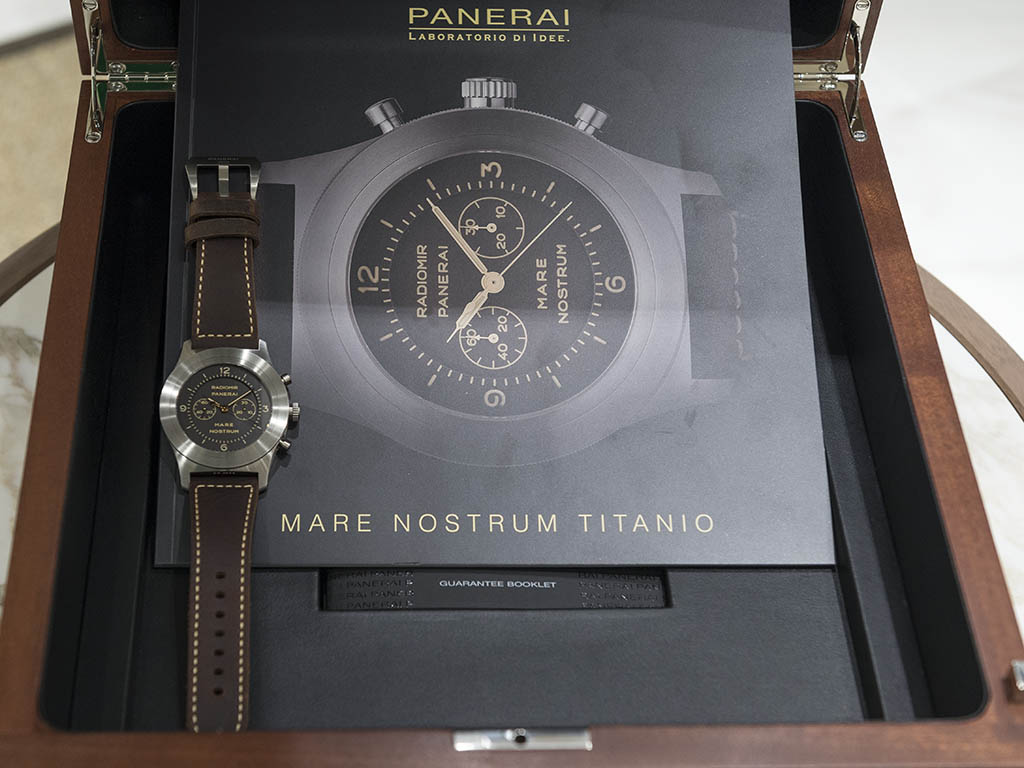 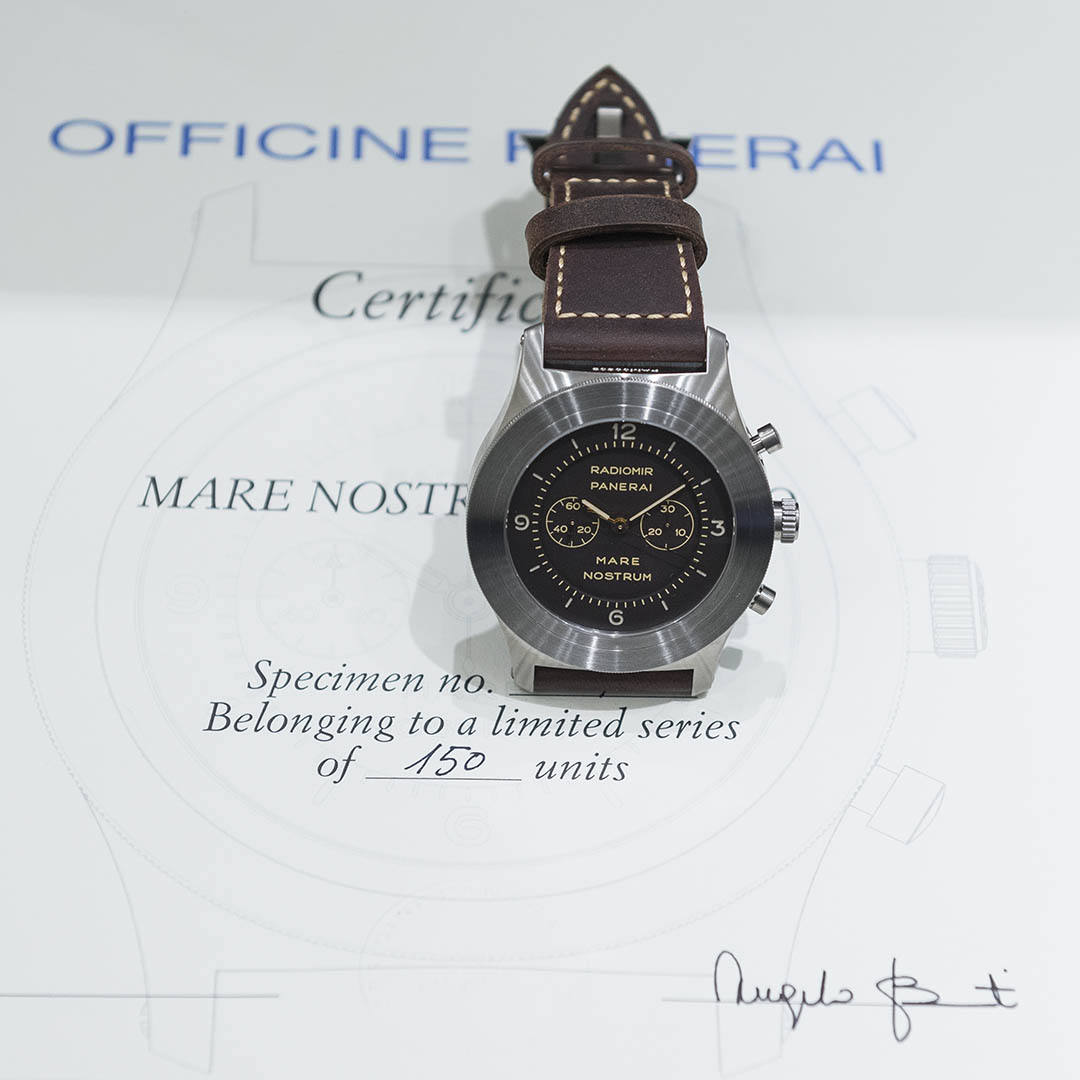 It wears quite comfortably on the wrist thanks to it’s soft structure. It also also matches the watch’s vintage appearance perfectly.The buckle is also made of titanium in brushed form. 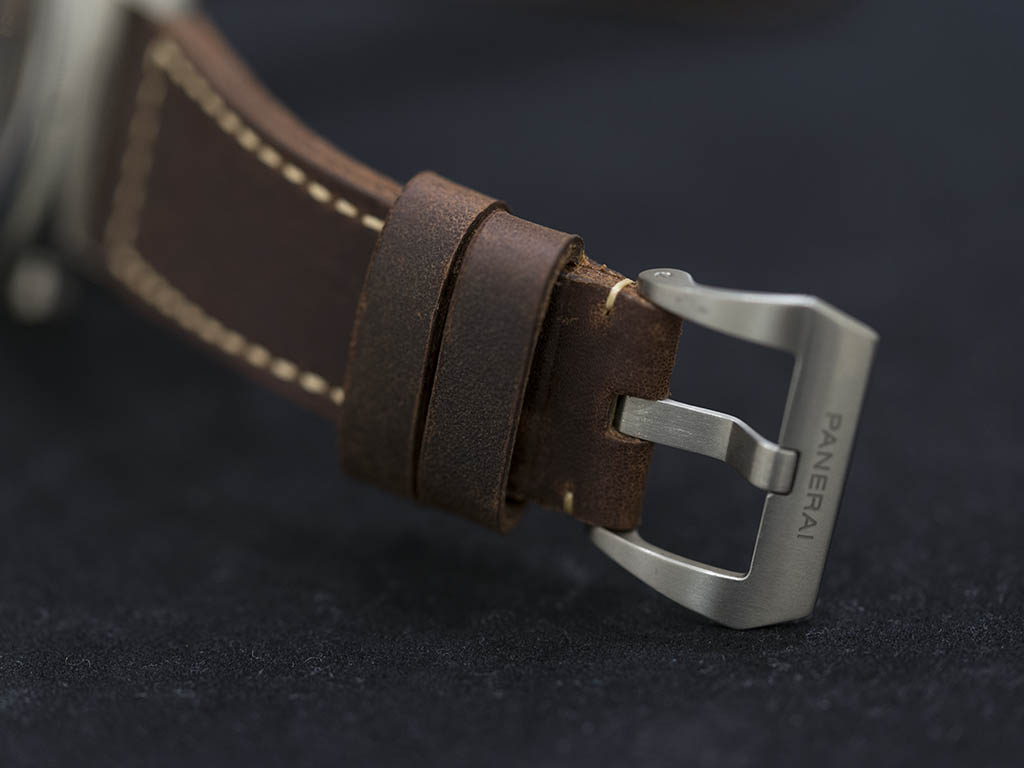 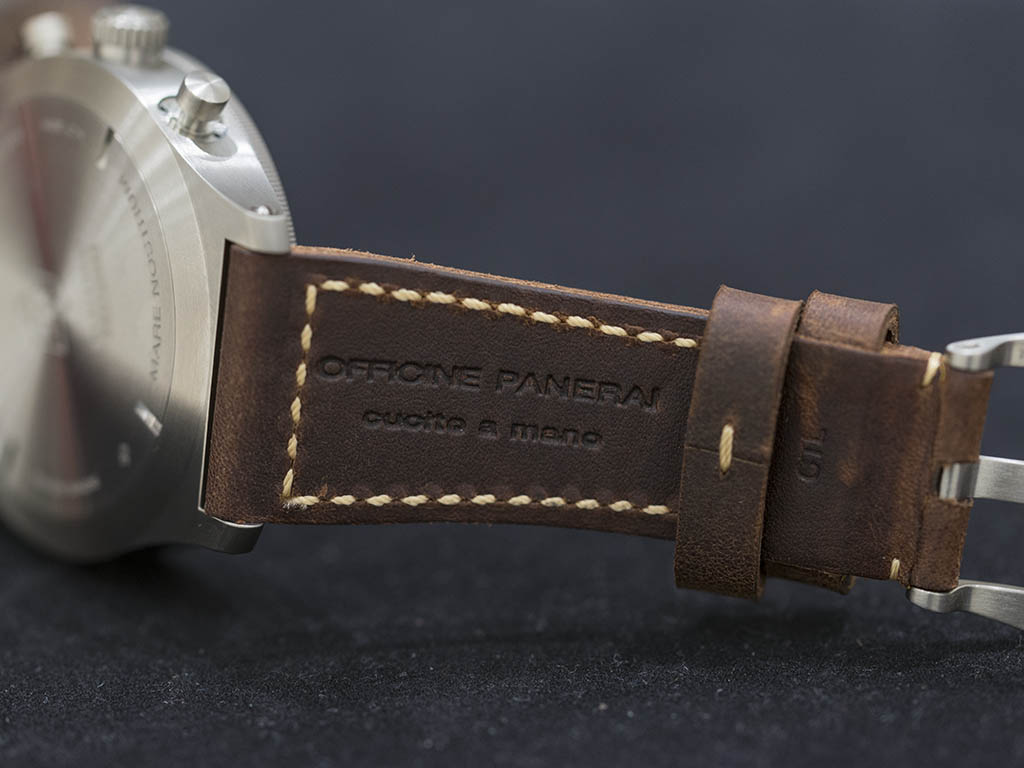 The predecessor released in 2010 was limited to 99pcs and the similarities between the re-issue and the very first Mare Nostrum were quite obvious therefore, many collectors would possibly keep hunting for the 2010 issue.

While being differentiated from the previous version with several technical and cosmetic upgrades, obviously the new Mare Nostrum requires more than plain symphaty to own with it’s 39.500 EUR price tag. 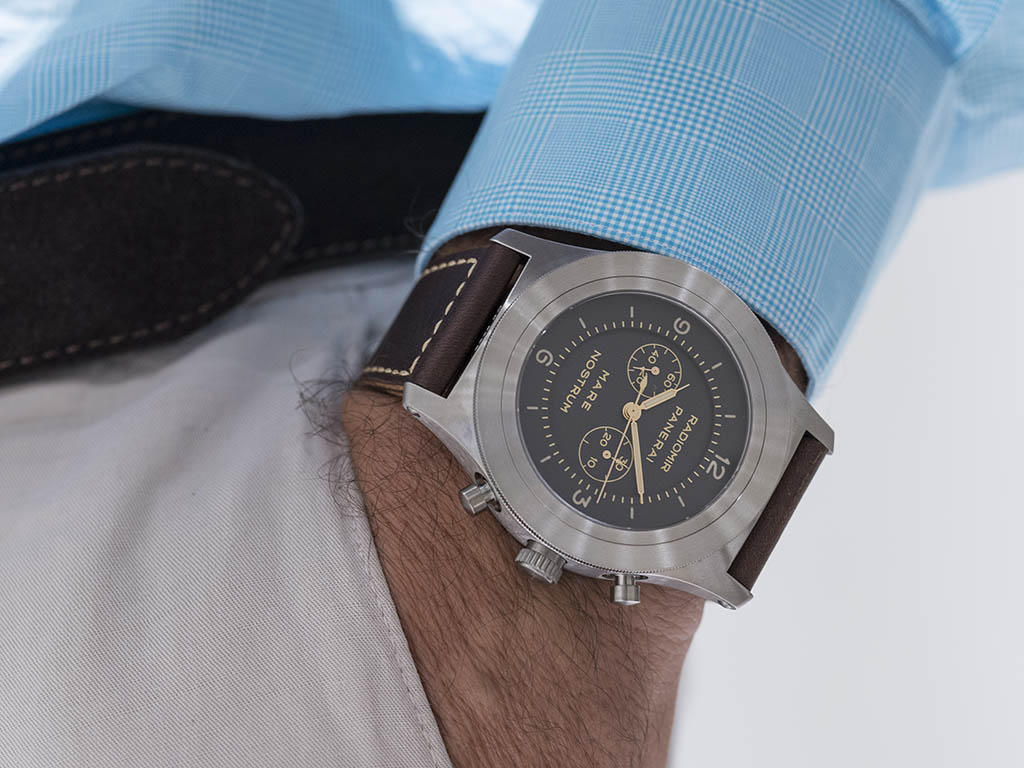 Of course, we didn’t forget to take the the photos of Mare Nostrum with two legends of brand, PAM507 Bronzo and PAM036 Marina Militare. 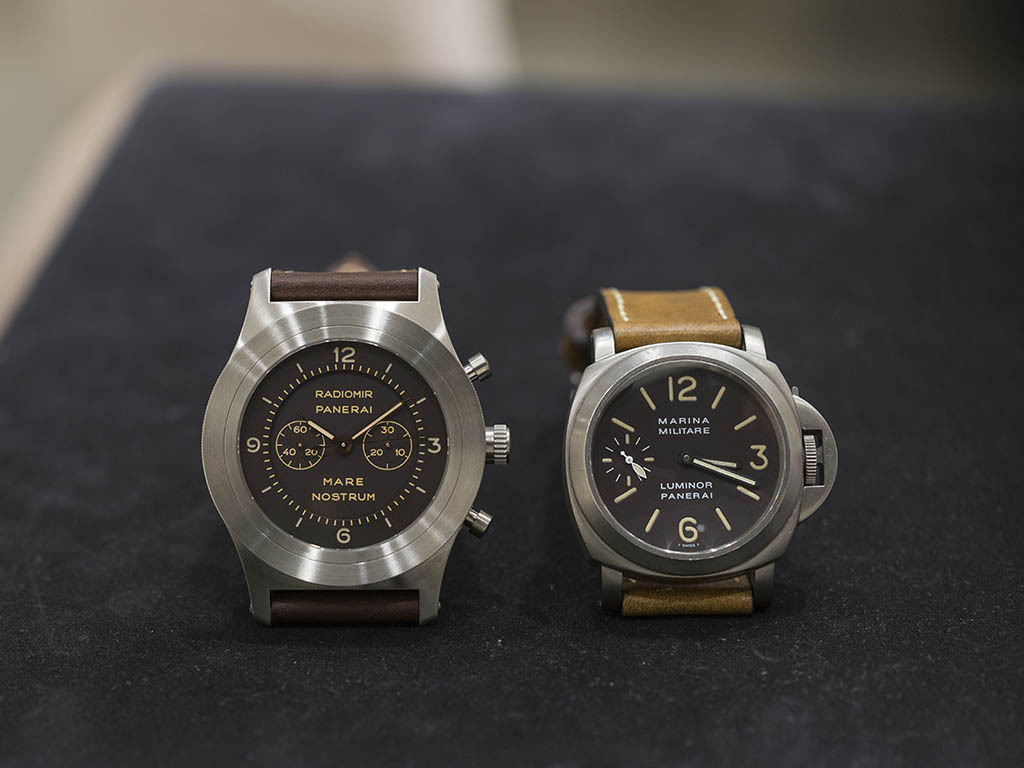 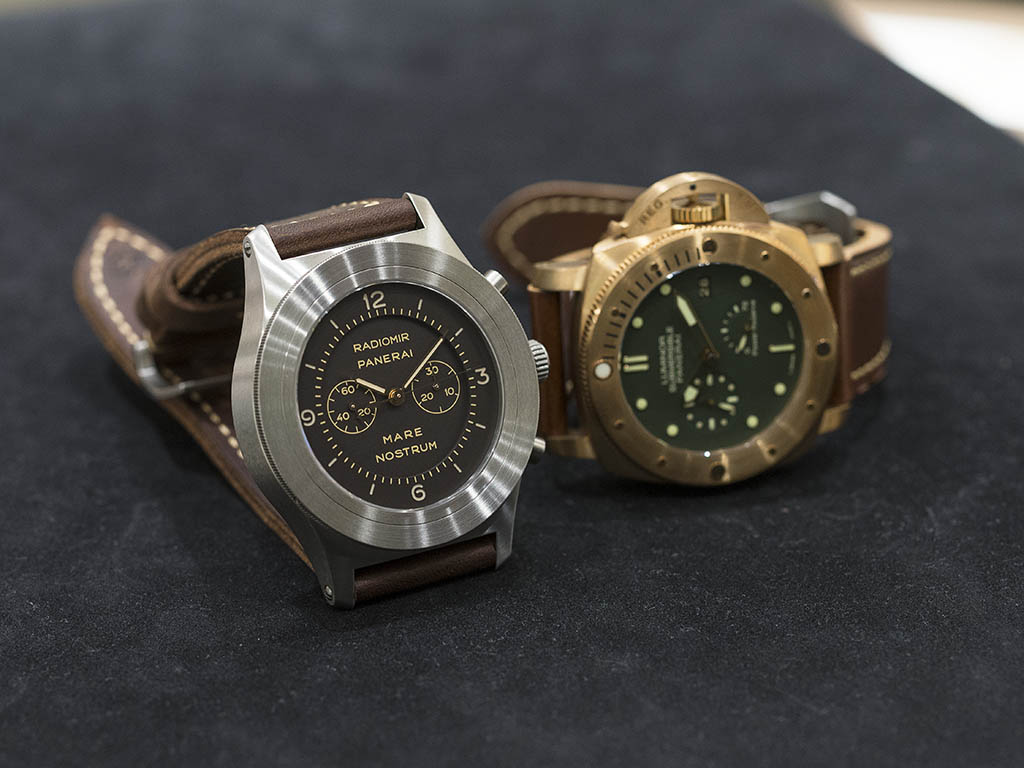 We consider ourselves lucky for having the pride of sharing the very first review of this iconic model with you. We would like to express our sincere thanks to family of Panerai for all those privileges.