Here we are with another exotic timepiece from Richard Mille, RM 015 Tourbillon Dual Time Zone model exclusively designed to commemorate the Perini Navi Cup which is one of the world’s most respected sailing organizations.

In addition to the Tonneau style cases, Richard Mille has a unique reputation in the watchmaking industry with its superior engineering solutions, outstanding material choices and breathtaking design details. 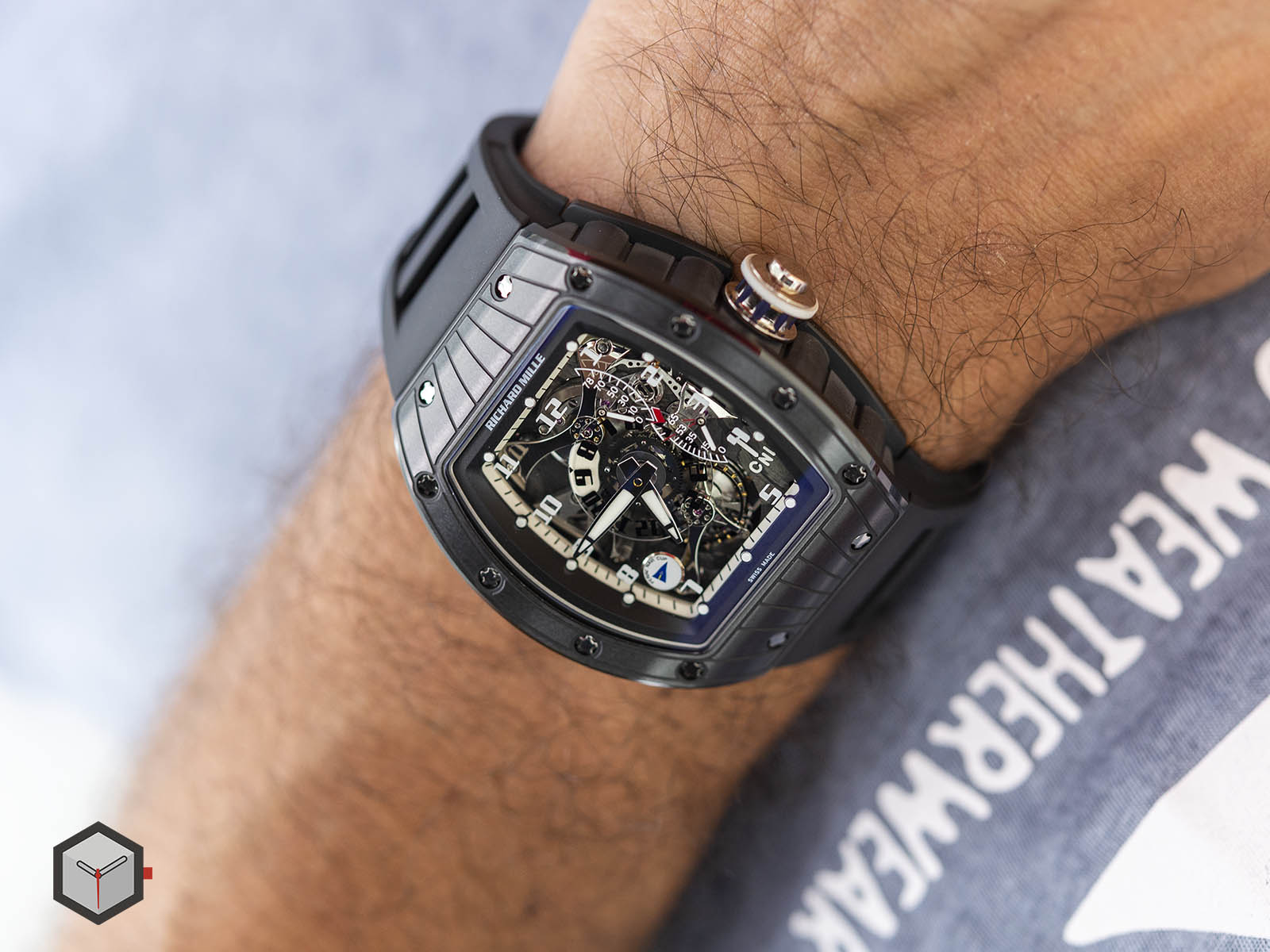 The RM 015 model, specially designed for the Perini Navi Cup sailing race, incorporates all these advantages. The case, which measures 48 mm x 39,3mm x 13,84mm, is equipped with a black ceramic TCP bezel and case back while its middle body is manufactured from NTPT carbon. Reinforced with Nitrile seals and Titanium screws, the case is water resistant to 50 meters. Featuring scratch resistant sapphire crystals on both faces, the model offers a number of details that are inspired by the world of sailing. There are details and accents that are inspired by sailing equipment everywhere from the winding crown to the Tourbillon and hairspring bridges. One of the factors that make Richard Mille such a high-end manufacturer is the level of attention paid to the details which can easily be seen in RM 015 among superior craftsmanship. 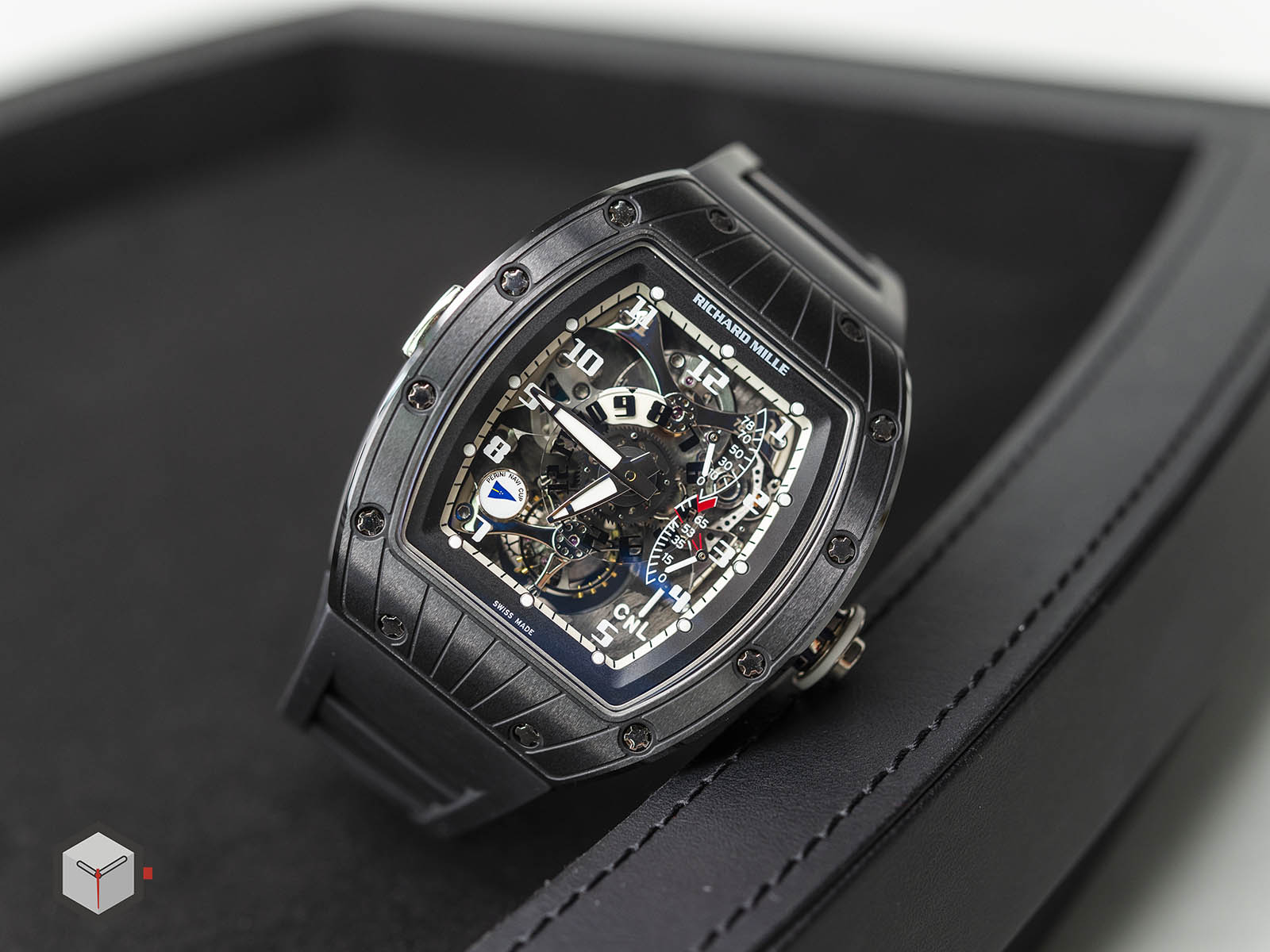 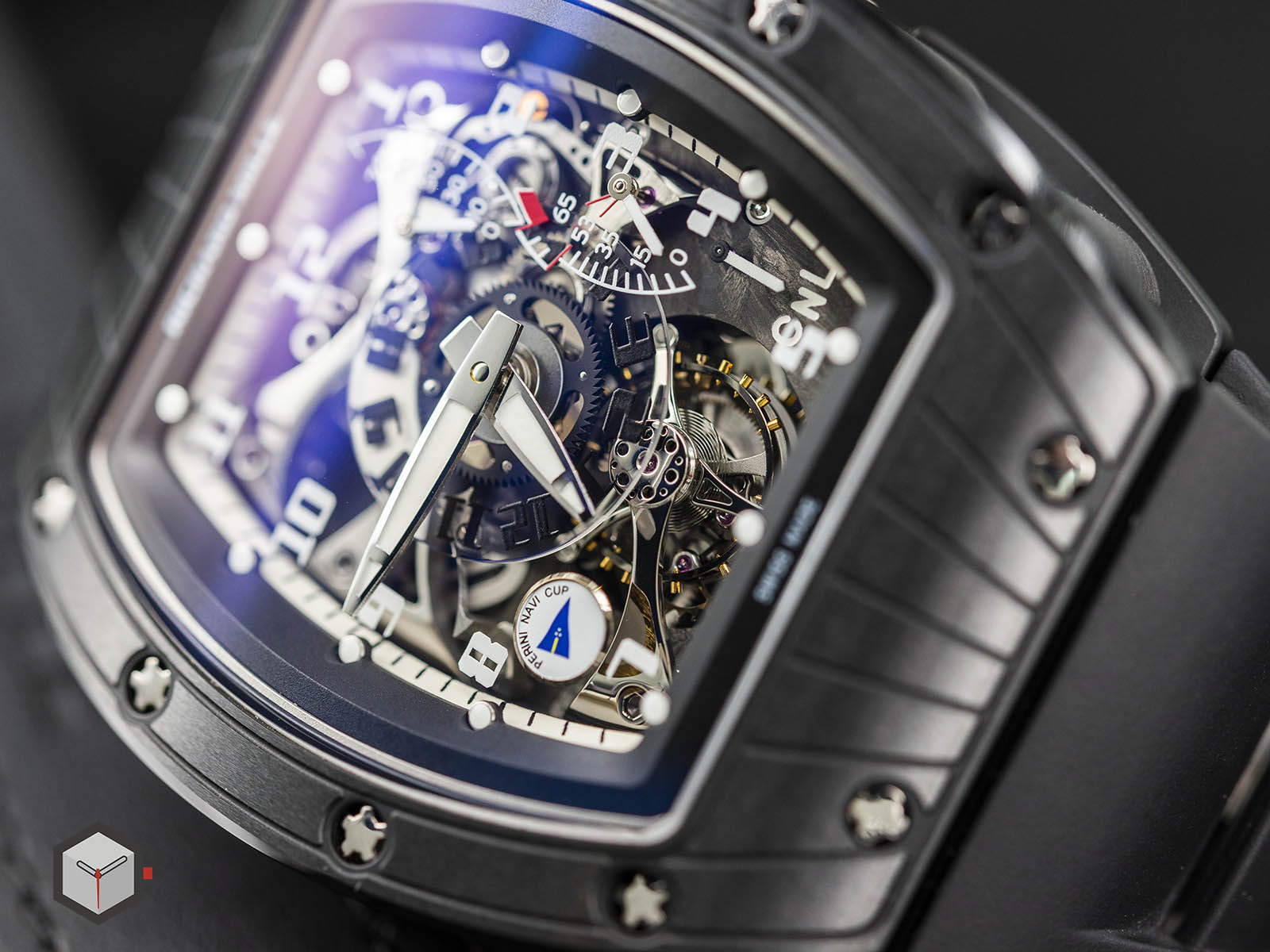 The power reserve indicator is located at 3 o’clock and the hairspring torque-meter is present at 1 o’clock as RM’s dial design classics. The hand that rests at 4 o’clock position, which is assigned to show the current mode of the winding crown, is operated via a pusher located on top of the winding crown itself. In RM 015, modes of the winding crown is not selected by pulling it in different positions. Instead of that, the modes neutral, winding and setting can be selected by pressing that pusher. The other pusher, on the left side of the case, is used for setting the second time zone indicator. 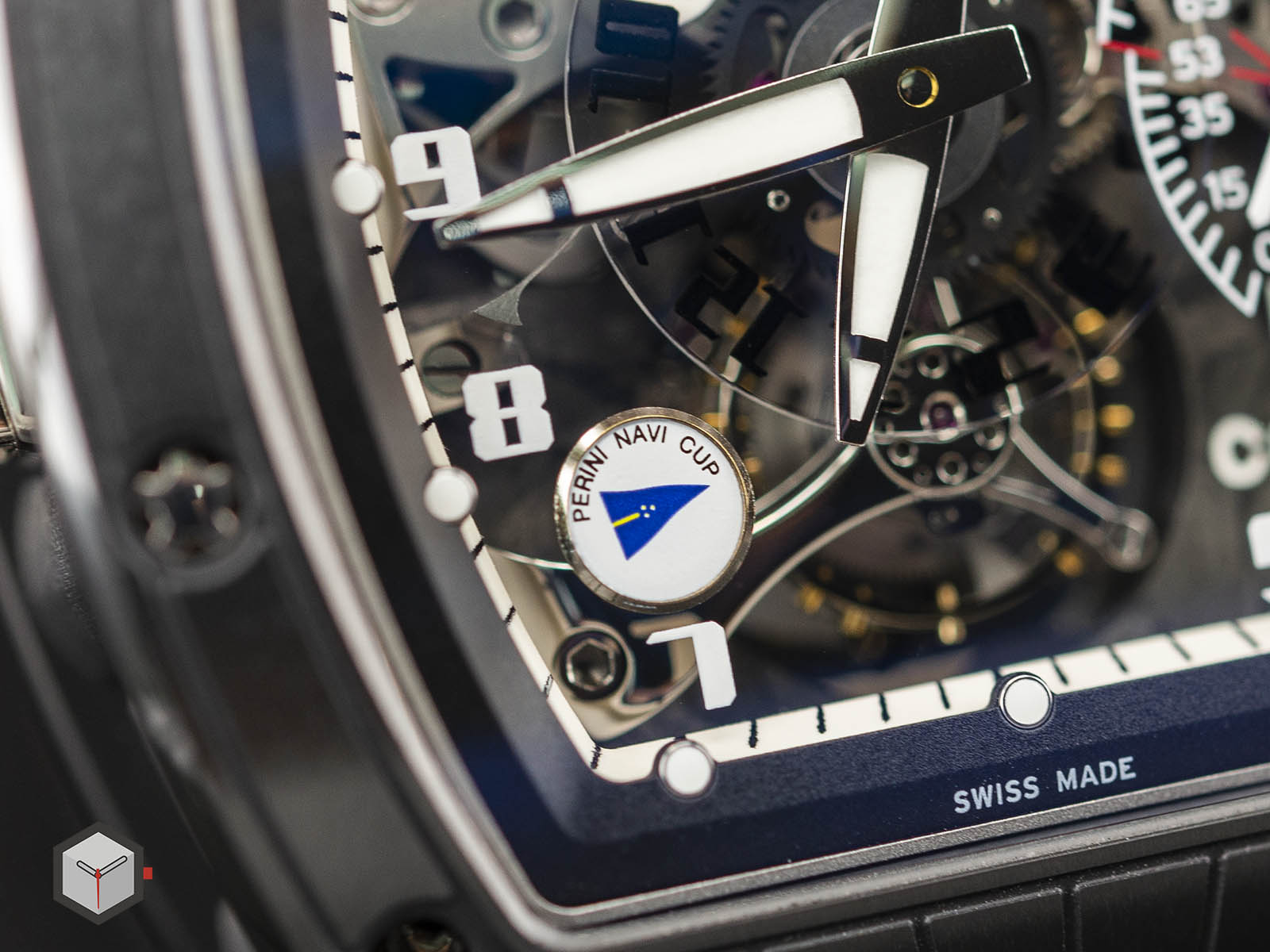 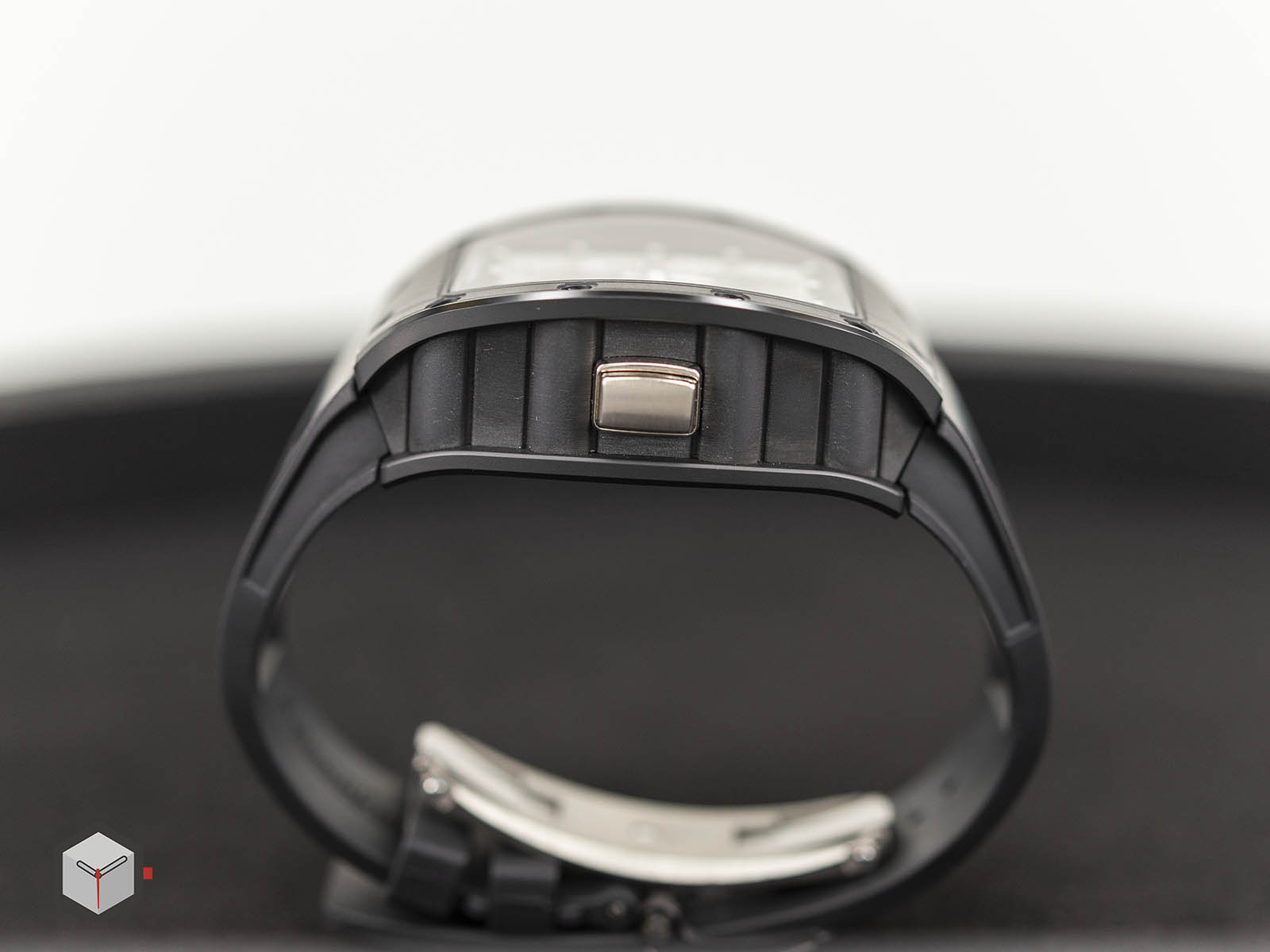 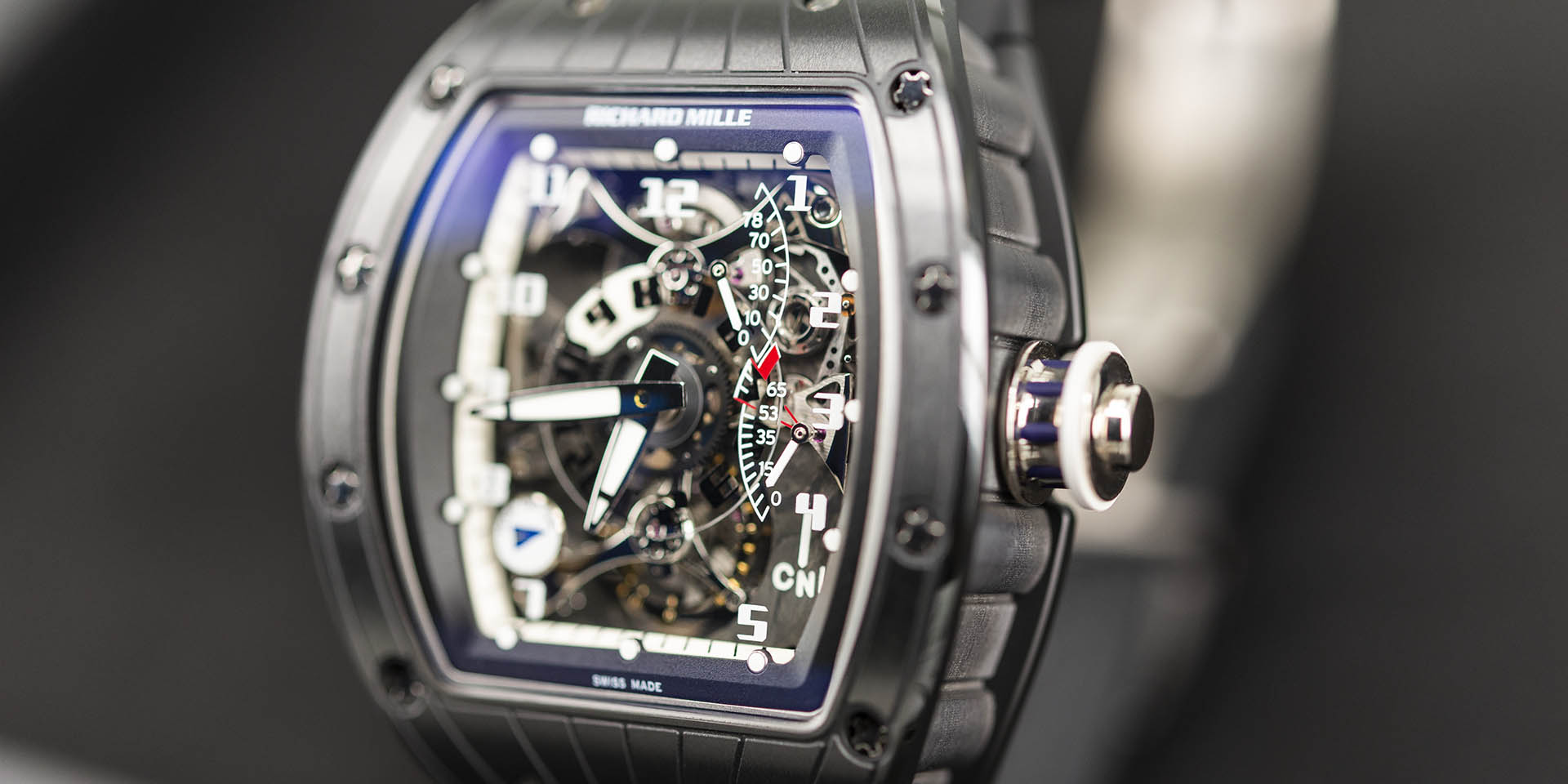 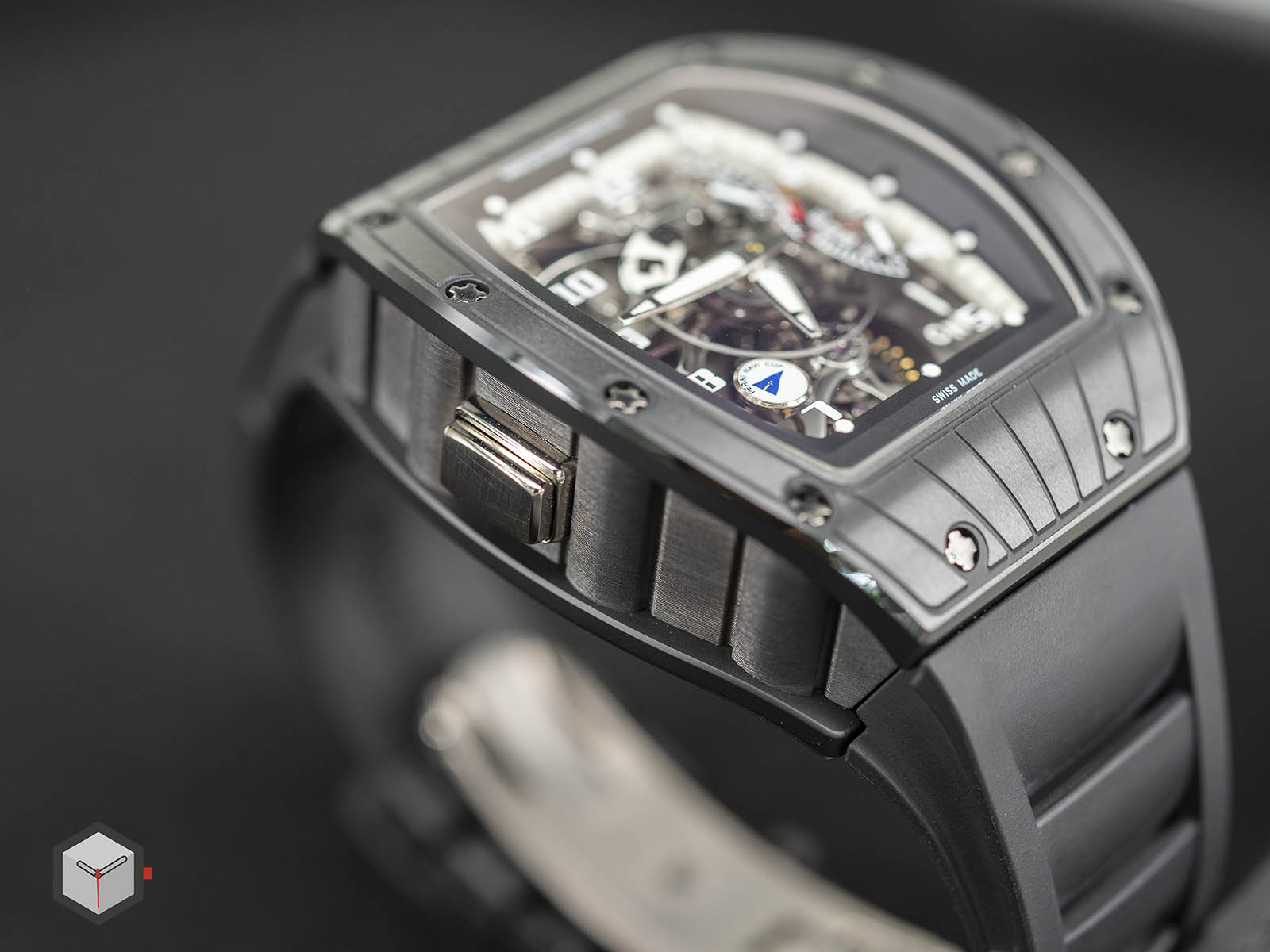 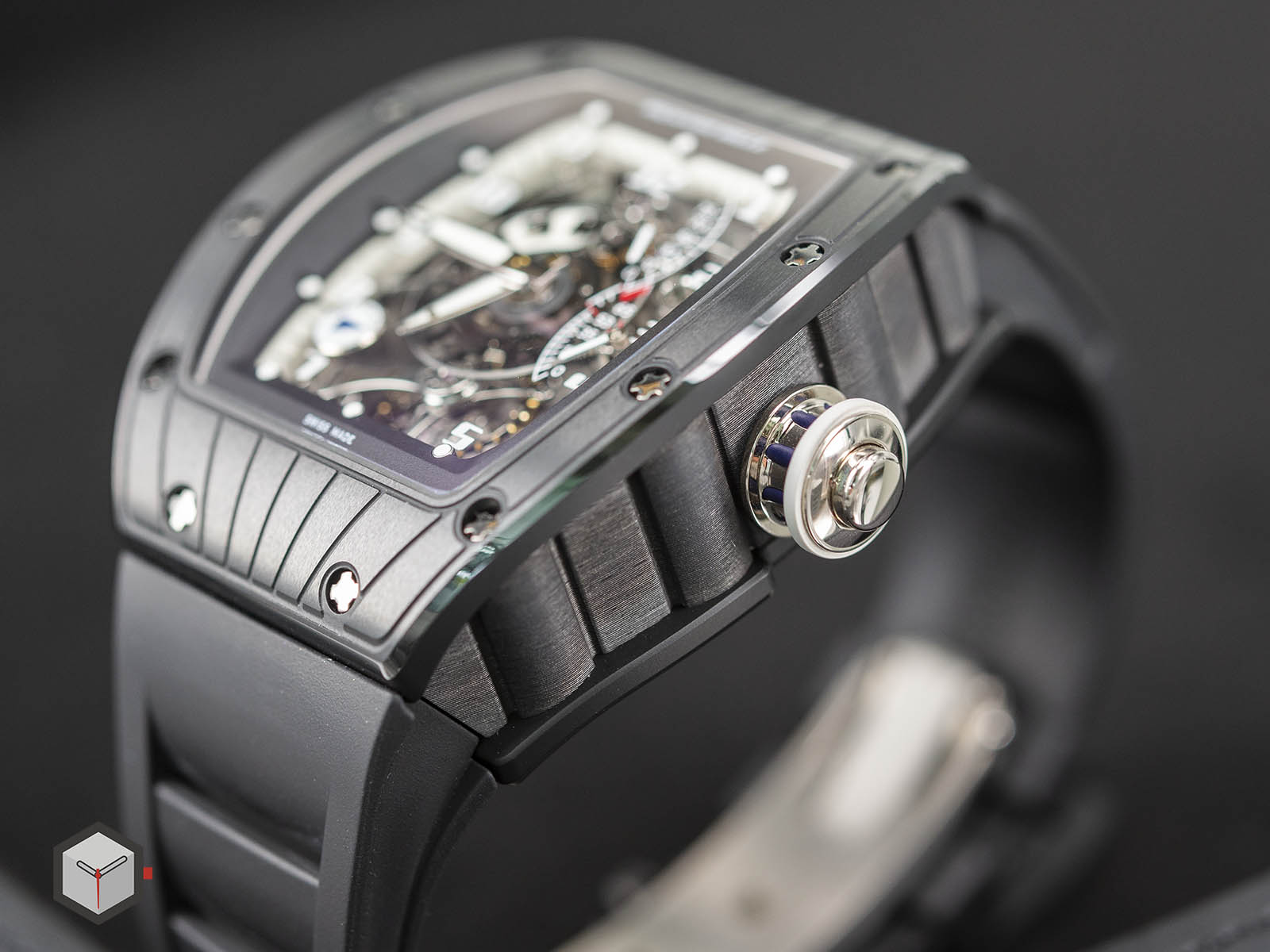 The model is powered by the Caliber RM 015, which is exclusively designed for this very model as the name suggests. The base plate of the movement is manufactured from a special material called Nanofiber, which is produced by applying 7500 N m pressure at 2000°C temperature. Thanks to the isotropic composite nature of the material, superior mechanical and chemical resistance are achieved. The bridges in the movement are made of stainless steel, just like a sailboat. 23 jewels movement beats at a frequency of 21.600vhp and offers a 65-hour power reserve when fully wound. 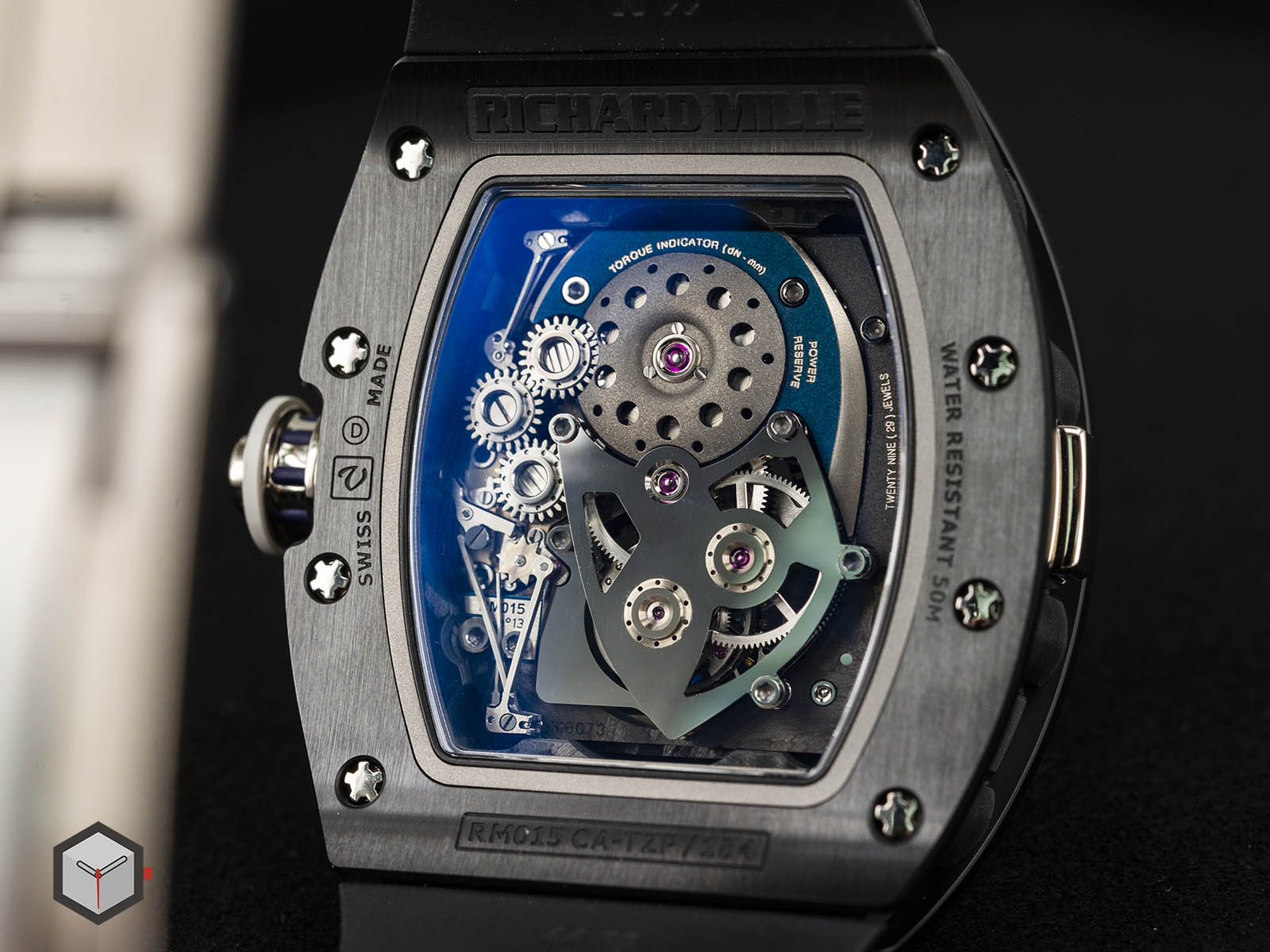 The Richard Mille RM 015 Tourbillon Dual Time Zone Perini Navi Cup comes on a black rubber strap that is secured by a folding clasp designed in matching color with the case. Richard Mille uses flat springs in its folding clasps, instead of conventional locking mechanisms, which offers better functionality and ease of use. 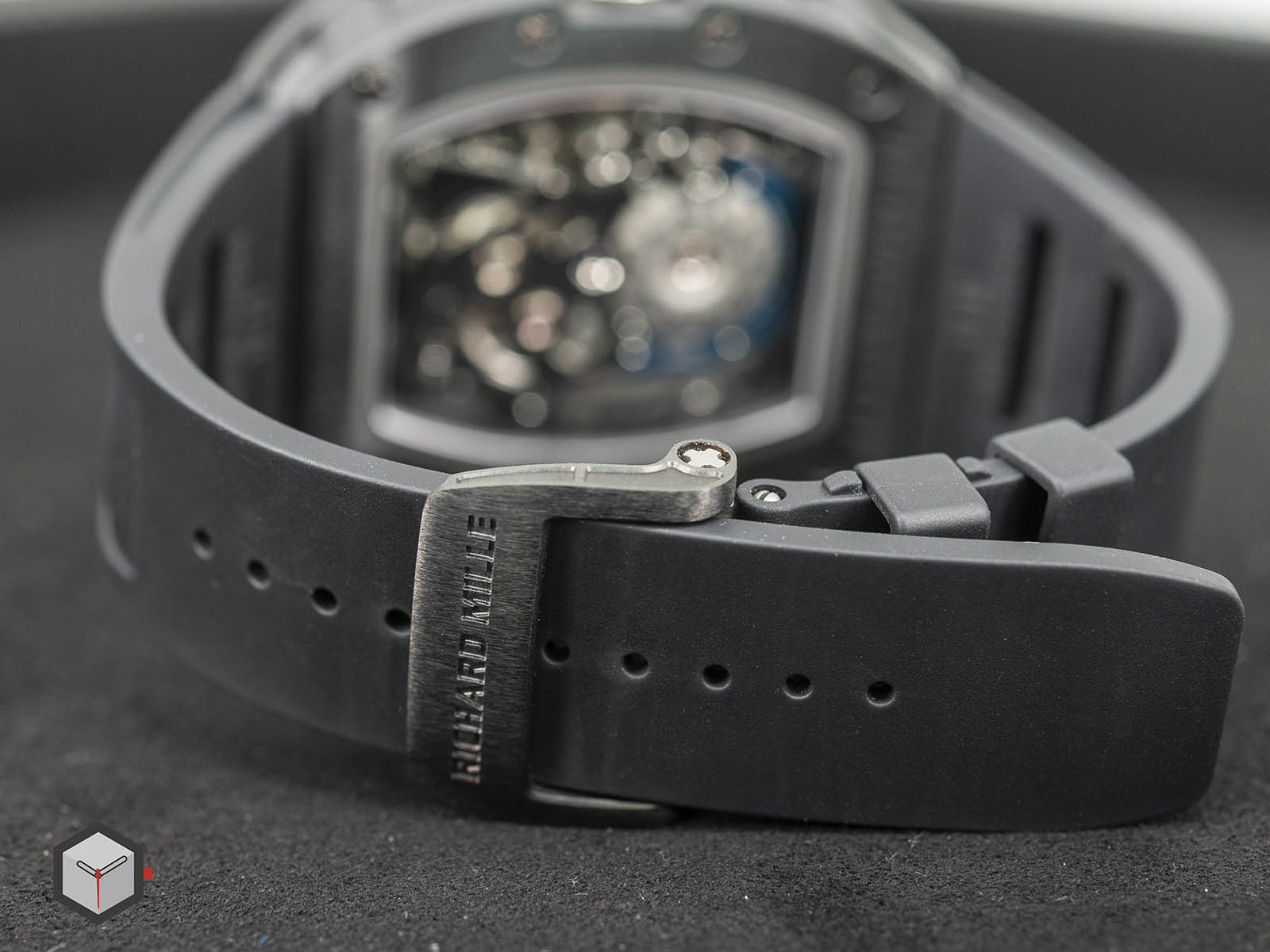 Since the model Richard Mille RM 015 Tourbillon Dual Time Zone Perini Navi Cup will be offered for a certain period of time, it is available through Richard Mille boutiques around the globe only. 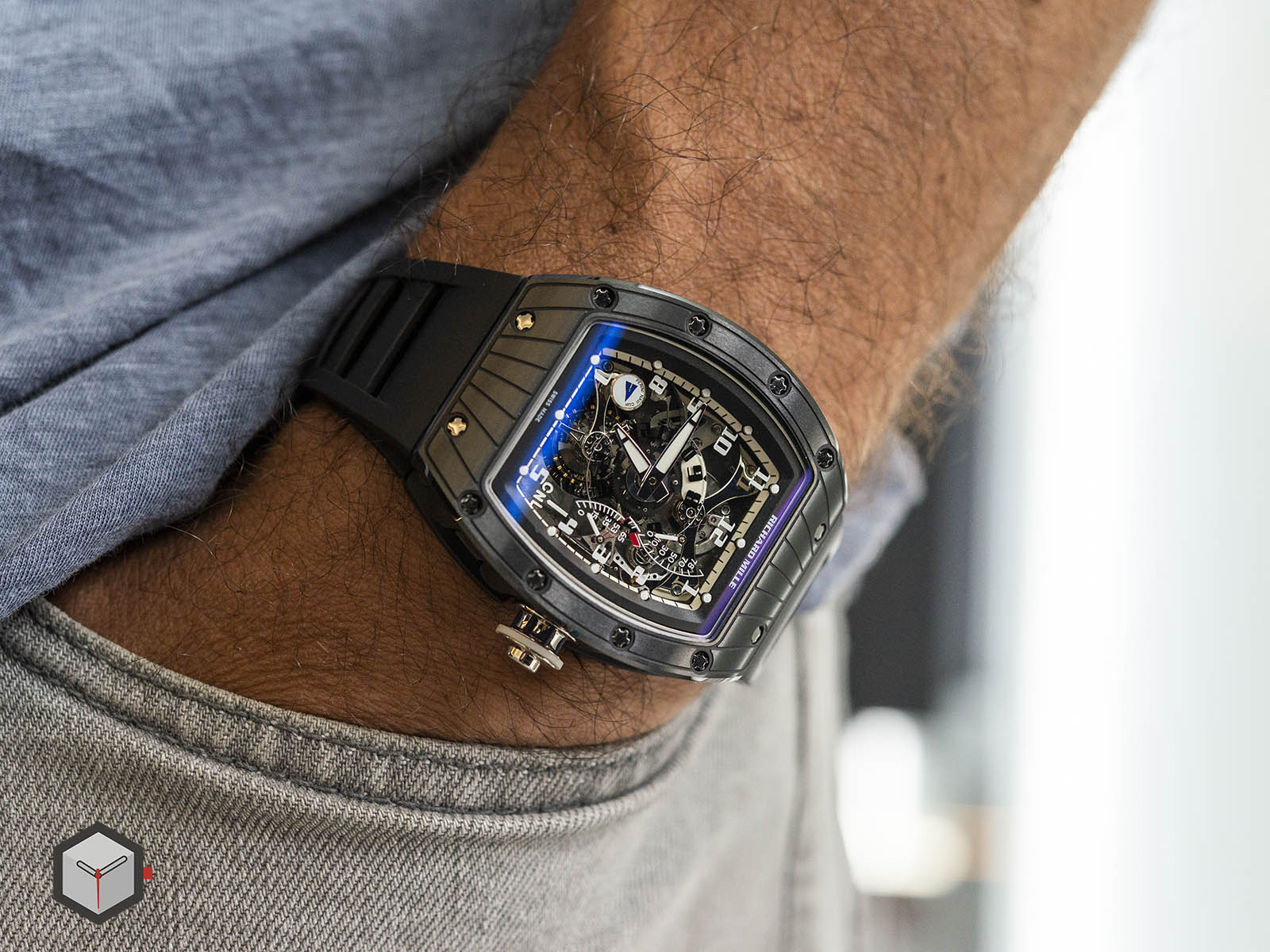