Snowdrop & Bangle: The Legend of 101 by Jaeger-LeCoultre

Jaeger-LeCoultre, one of the legendary names of horology, strengthens the alliance of luxury watchmaking and the art of jewelry with two new 101 models. 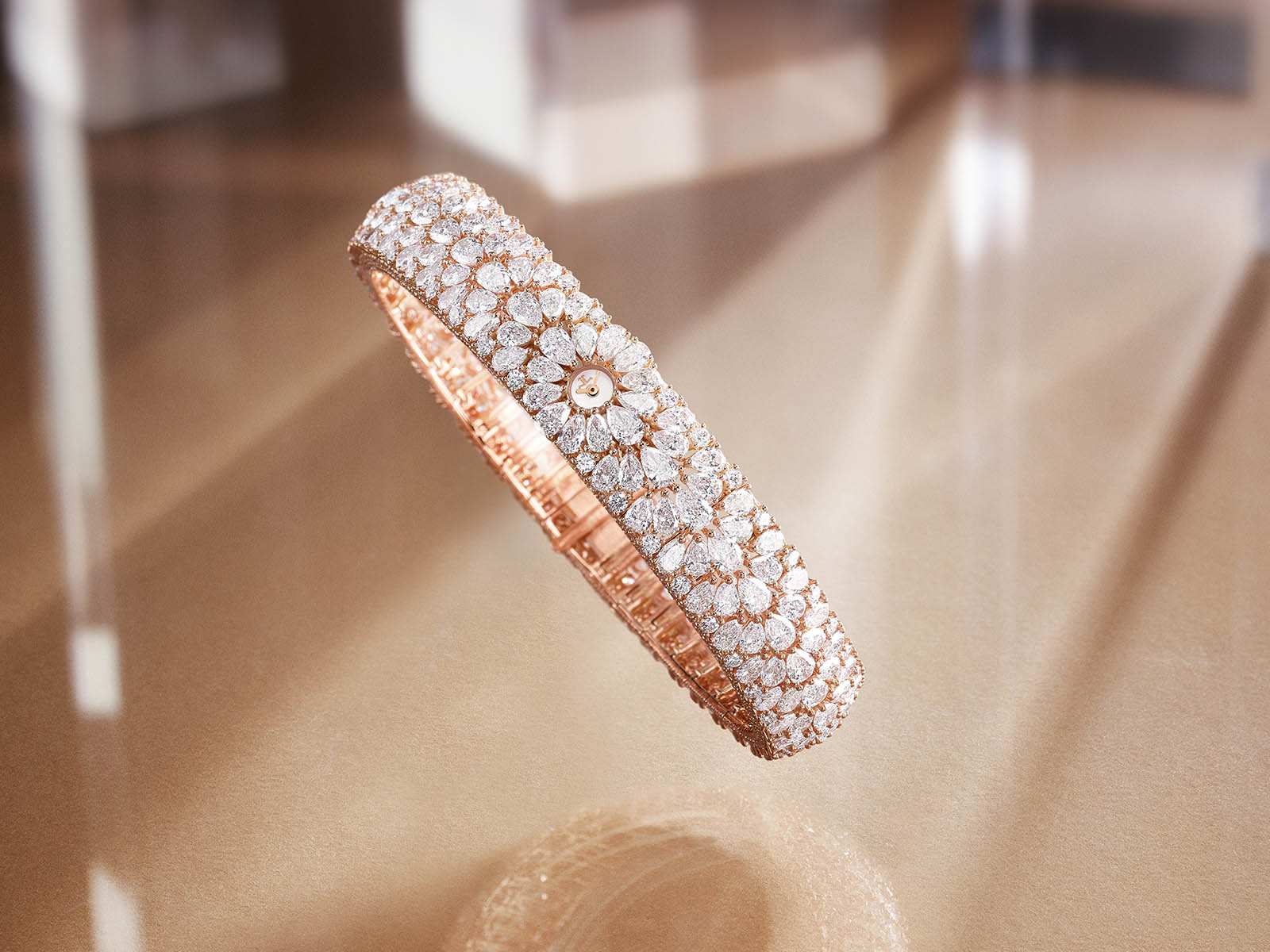 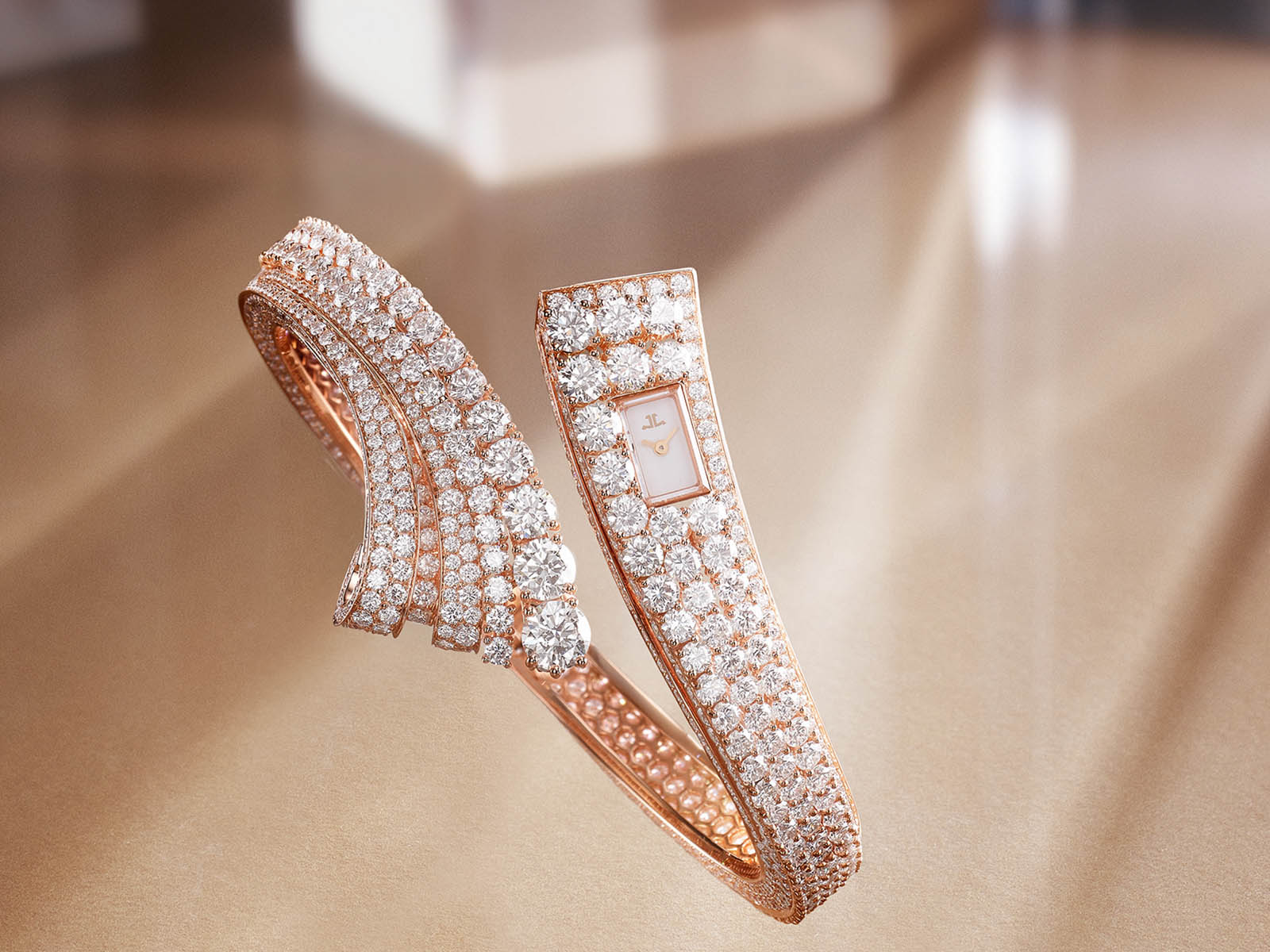 Jaeger-LeCoultre is gathering the spotlights on Caliber 101 again with the two new 'High Jewelry' models it has introduced recently. With two completely original designs, Caliber 101 is placed at the heart of jewelry art. 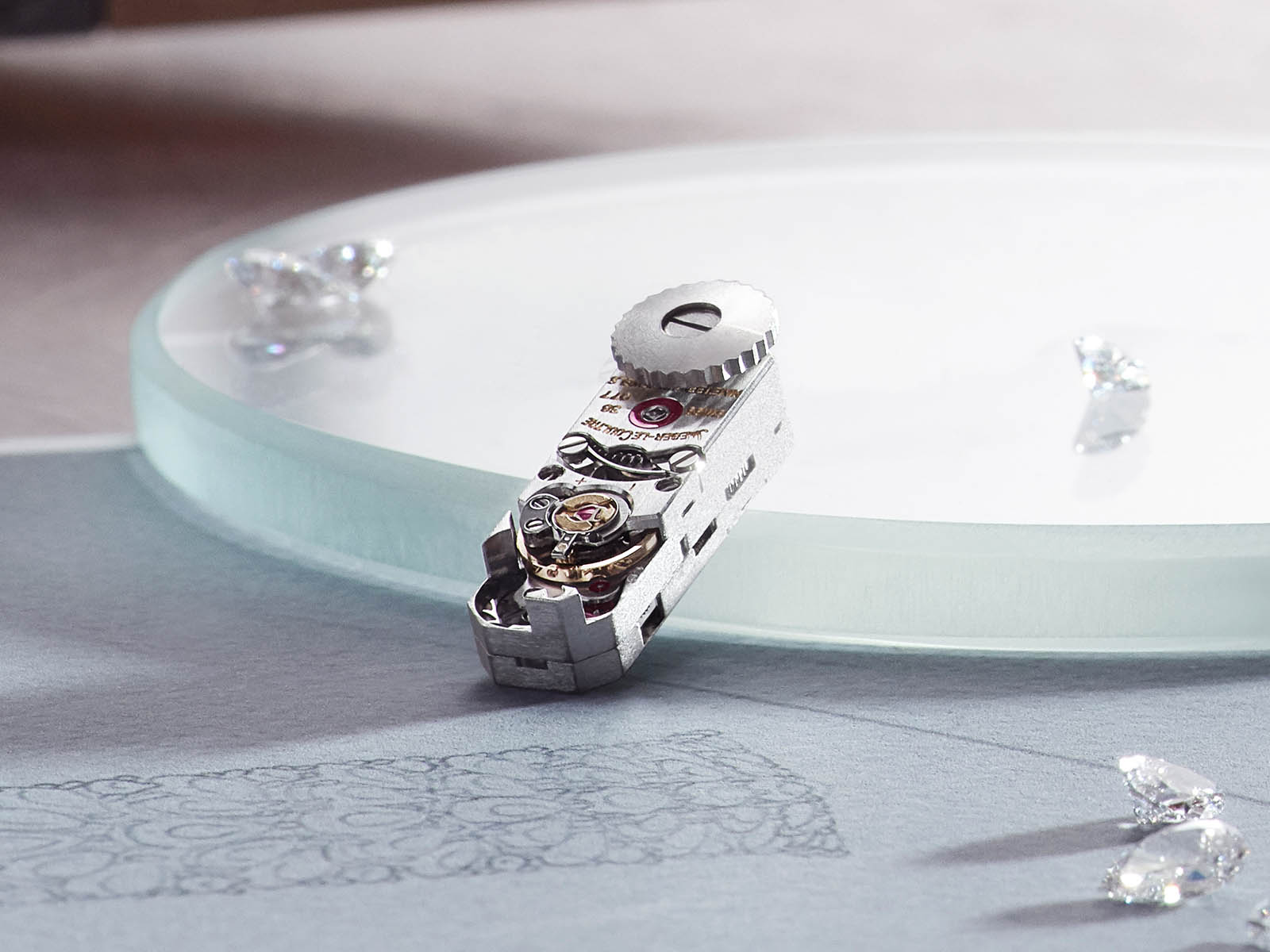 Jewelry is the name given to the processing of precious metals and stones, especially gold, into artifacts that are used as jewelry and investment tools. It is not easy to master jewelry, which has a long history. Processing techniques for precious stones and metals are generally transferred from father to son and from master to apprentice. The widespread use of precious stones in jewelry coincides with the Renaissance period. Although there is no moving mechanism involved, jewelry is as valuable as horology. As a result of the combination of such two arts, a valuable and challenging product emerges. 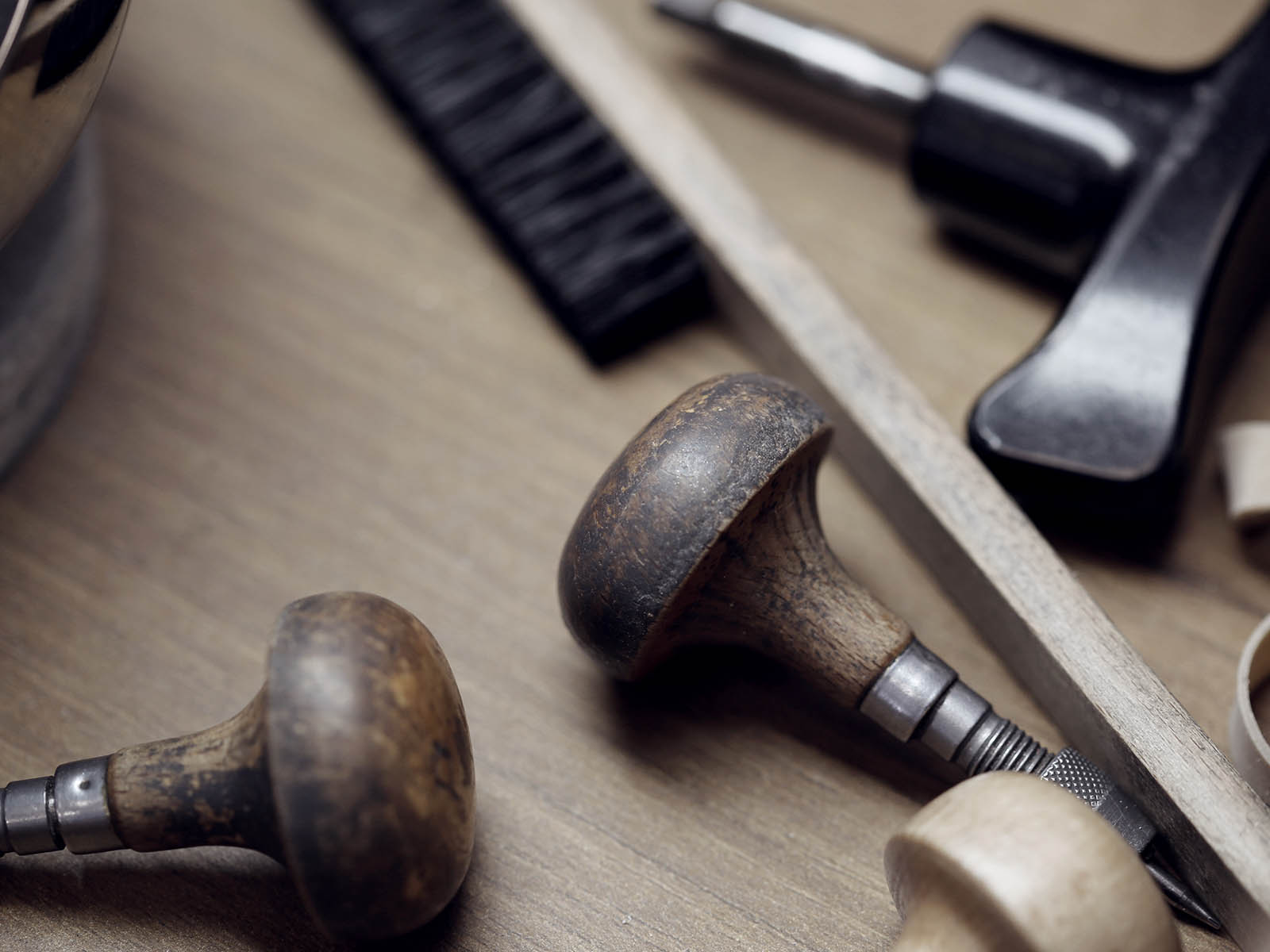 Caliber 101, which gives life to this eye-catching art, was first created by 'La Grande Maison' in 1929 to serve this very purpose. The movement, which gives the designers the freedom to set sail for new ideas with its tiny size (14mm x 4.8mm x 3.4mm) and baguette-shaped structure, is a remarkable achievement of miniaturization since it was developed half a century before computer-aided design and production technology. This tiny, hand-wound movement, which weighs almost one gram, is still in the records as the smallest mechanical movement in the world.

The Caliber 101 has given life to the creations of both Jaeger-LeCoultre models and other major brands for over 90 years. These rare designs graced the wrists of many names such as Queen Elizabeth II. The jewelry watch on the wrist of the queen at the coronation was presented to her by the Prime Minister of France as a gift for the ceremony. 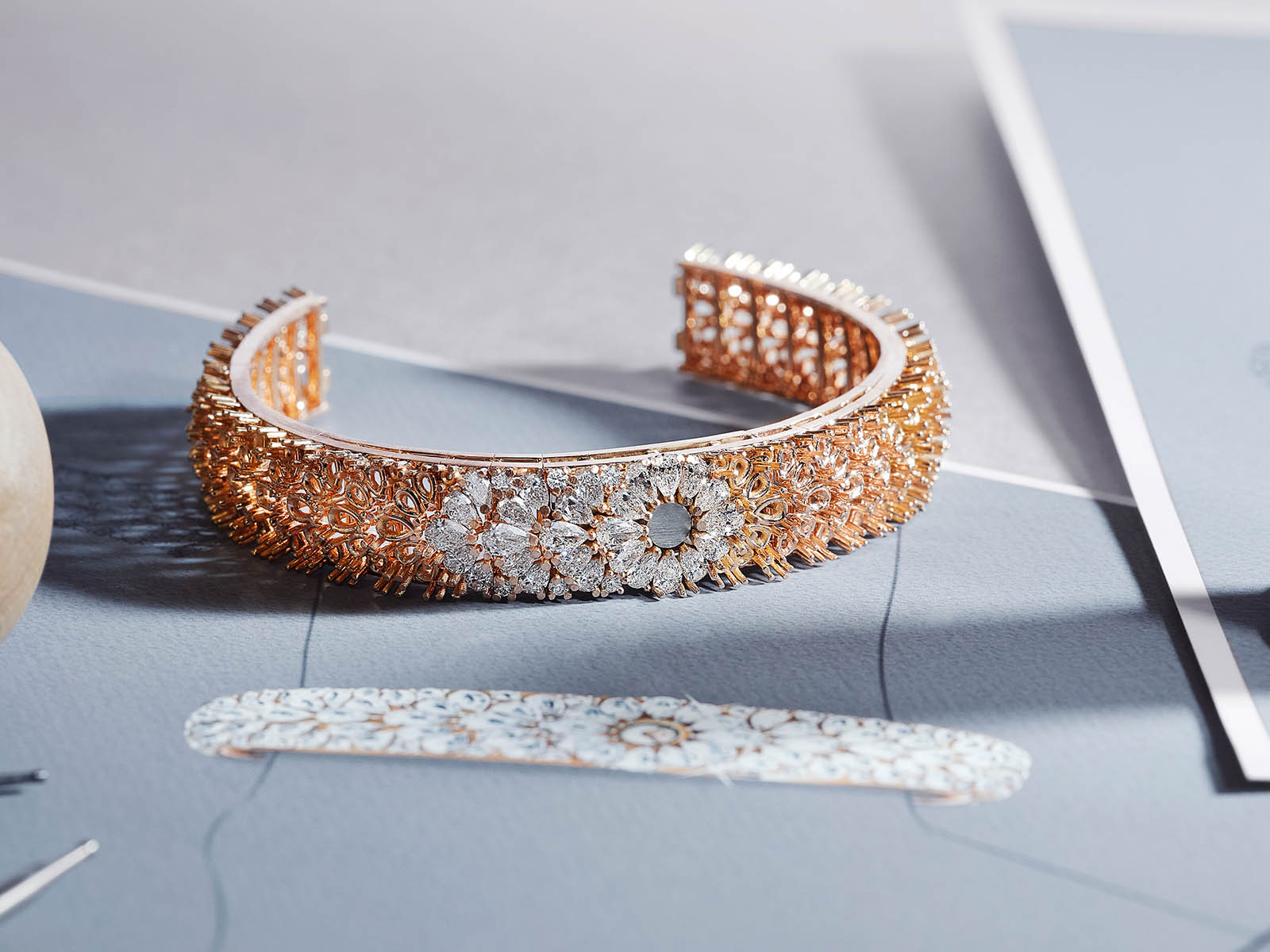 Jaeger-LeCoultre's in-house art team has adopted a jewelry-focused approach for the watches decorated with diamonds. First, the shapes of the bracelets and the way of placing the jewelry were designed, then the cases and the movements were integrated into the design. Normally when designing a watch, one starts with the case, then the opposite approach is taken by creating bracelets and/or straps to complete it.

Both bracelets, Snowdrop and Bangle, are made of rose gold with diamonds, adhering to the classic luxury jewelry codes, and only use stones classified as IF - VVS. 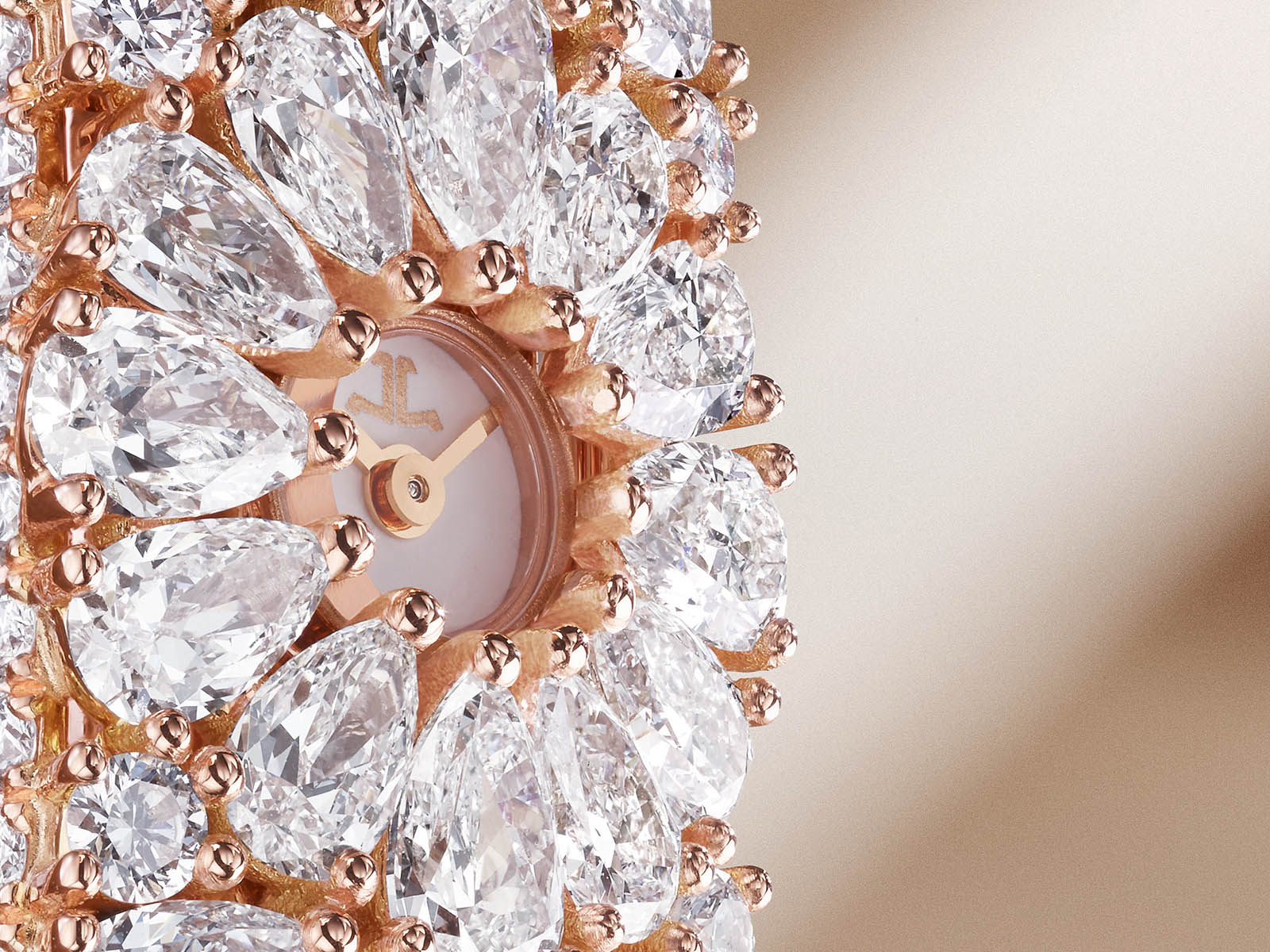 Cuff-style Snowdrop draws its inspiration from the white bell-shaped flowers that can grow in a thin layer of snow in the Vallée de Joux. A pear-shaped diamond circle surrounds the dial to create a flower, and the diamond waves repeat the petal pattern with perfect symmetry all over the bracelet. Jaeger-LeCoultre designers chose the 'griffe' design style for the diamond, which minimizes the presence of metal and allows light to pass through the stones from all angles. Thus, the diamonds have been given the appearance of floating on the surface of the bracelet. 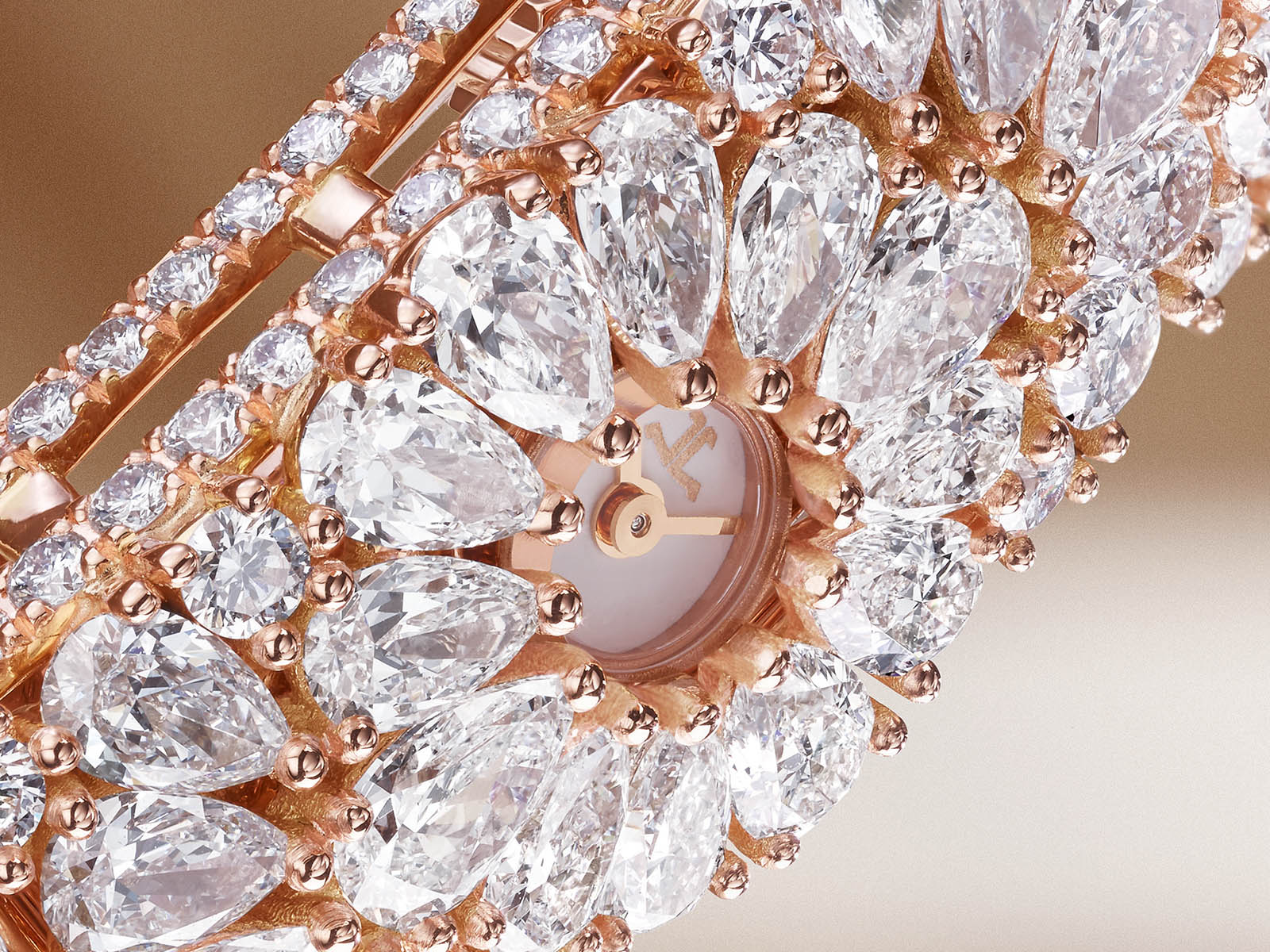 In the snowdrop model, there are 904 diamonds of 20.9 carats, 204 of which are pear and the rest are diamond cut. This jewelry watch represents 130 hours of labor. As can be seen from the profile, the structure of the bracelet is supported by two gold bands, each adorned with diamonds. 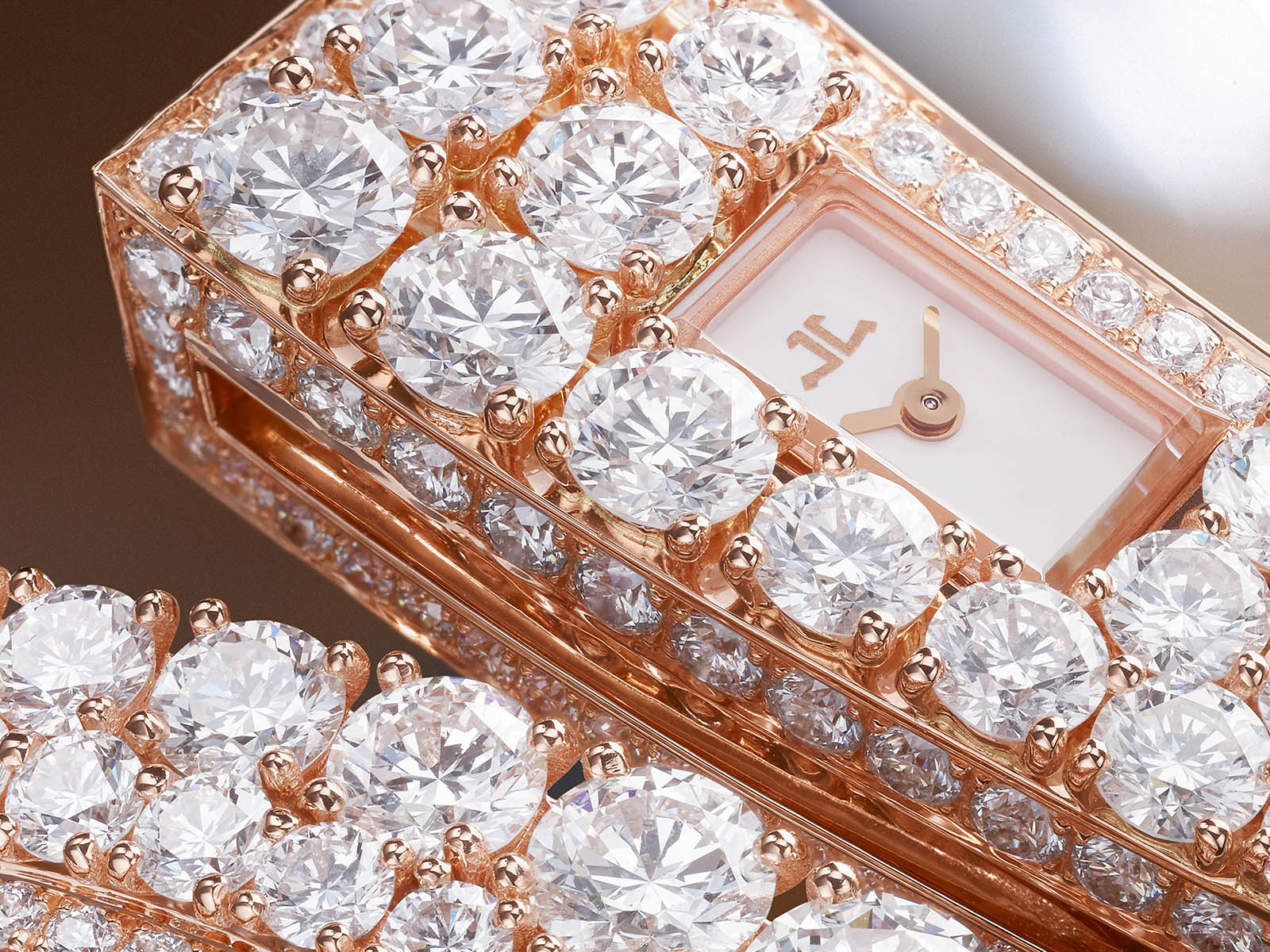 Inspired by Art Deco's elegant geometry and powerful forms of 20th-century modernism, Bangle melts the dynamic interplay of symmetry and asymmetry in the same pot. To emphasize the wide curves of the bracelet design, 19.7 carats, 996 diamond-cut diamonds are used in graded sizes. The craftsmen have combined different gem-setting techniques to increase the three-dimensional effect of the diamonds and to maximize the play of light. 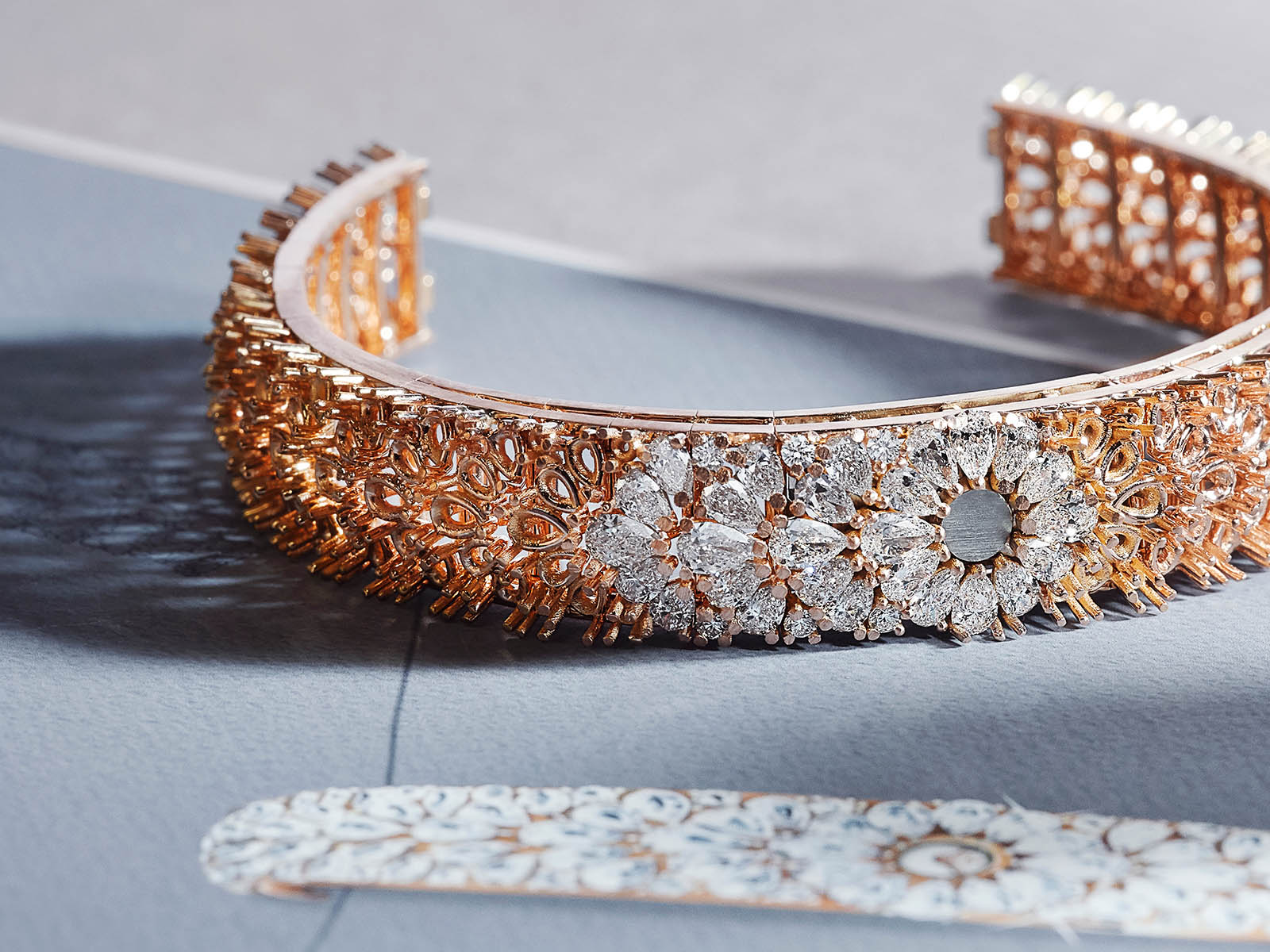 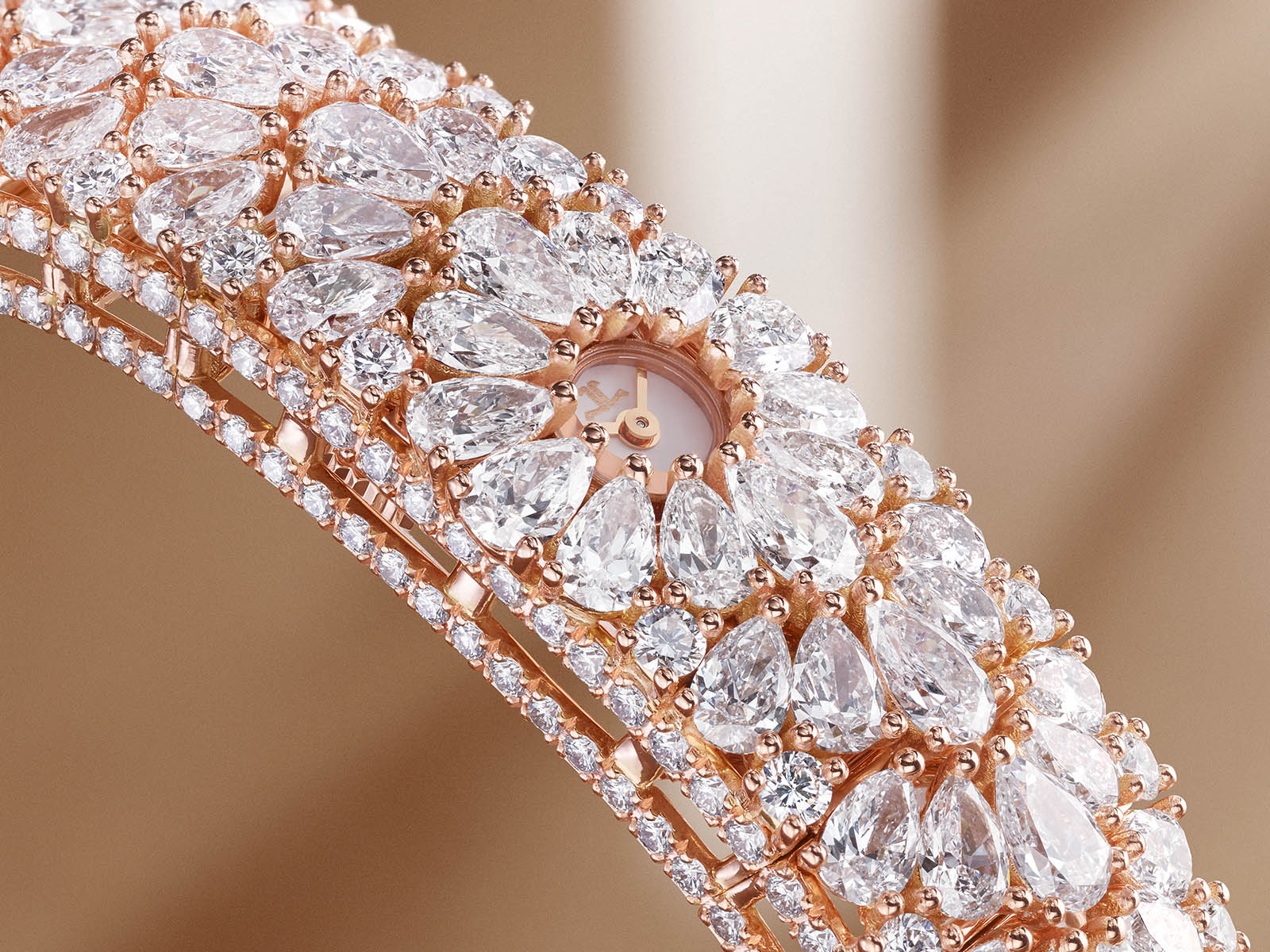 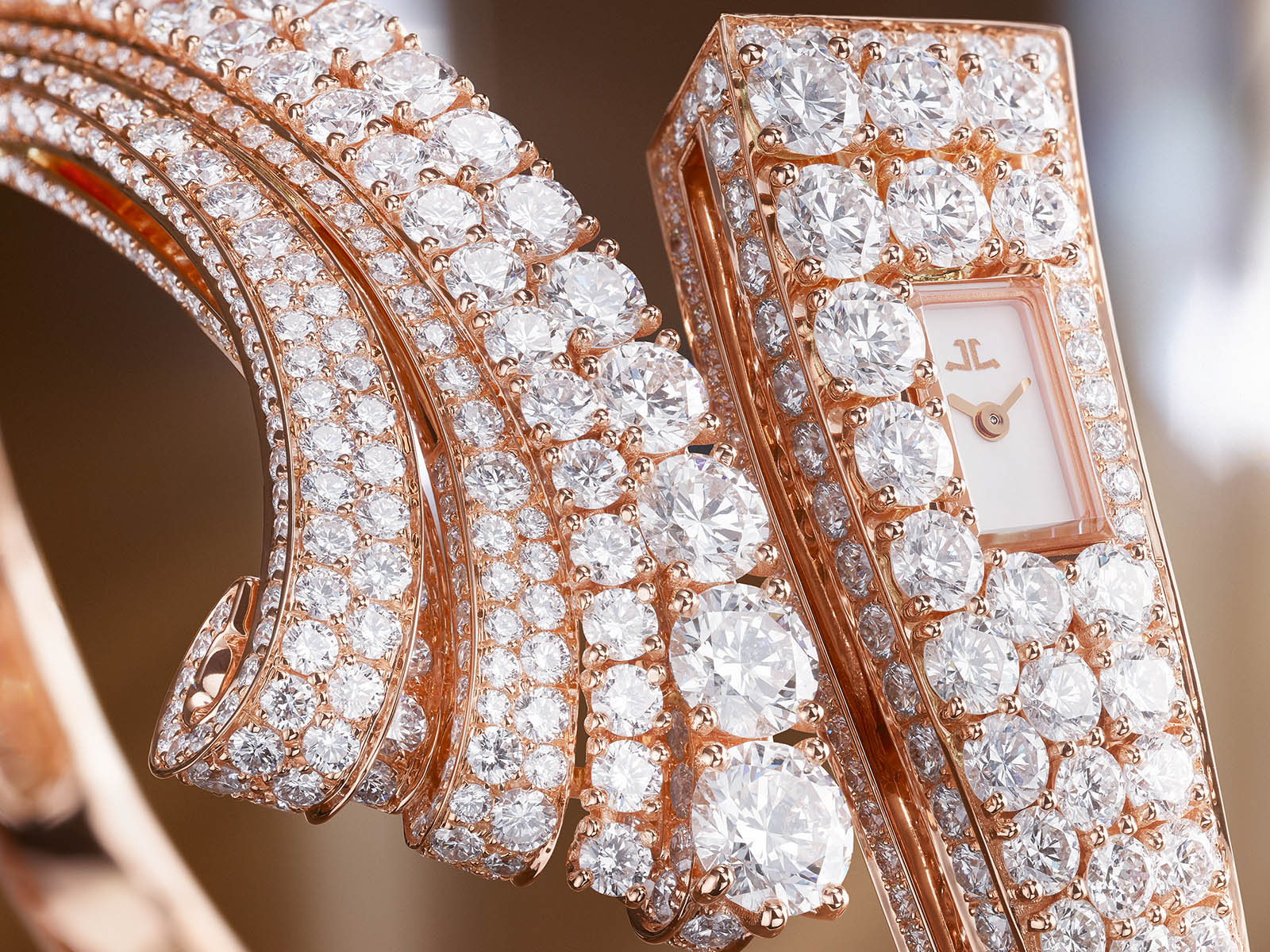