The Royal Oak legend was created in 1972. Approximately 20 years later the CEO of Audemars Piguet, Stephen Urquhart realized that it was time for making a difference.

Urquhart, today CEO of Omega, saw that the sales of the standard watch models started to slow down. He had a vision of a Royal Oak model, especially for the younger generation. In giving the mission to design the watch to the 22 years young member of the design team, Emmanuel Gueit, even Urquhart could not have foreseen the new trend in the luxury watch world, that was about to kick in.

The young Gueit created a totally different design from the previous ones. It was a big risk those days to produce a chronograph, that is sportive and big, as such models were not approved within the luxury segment yet.

The launch of the project was carried out under the nickname “The Beast”, however it was postponed to enter the market a several times due to different reasons. Only one of the reasons was, that it did not make a lot of sense to release the “Royal Oak for Youth” on the 20th anniversary of the Royal Oak model. 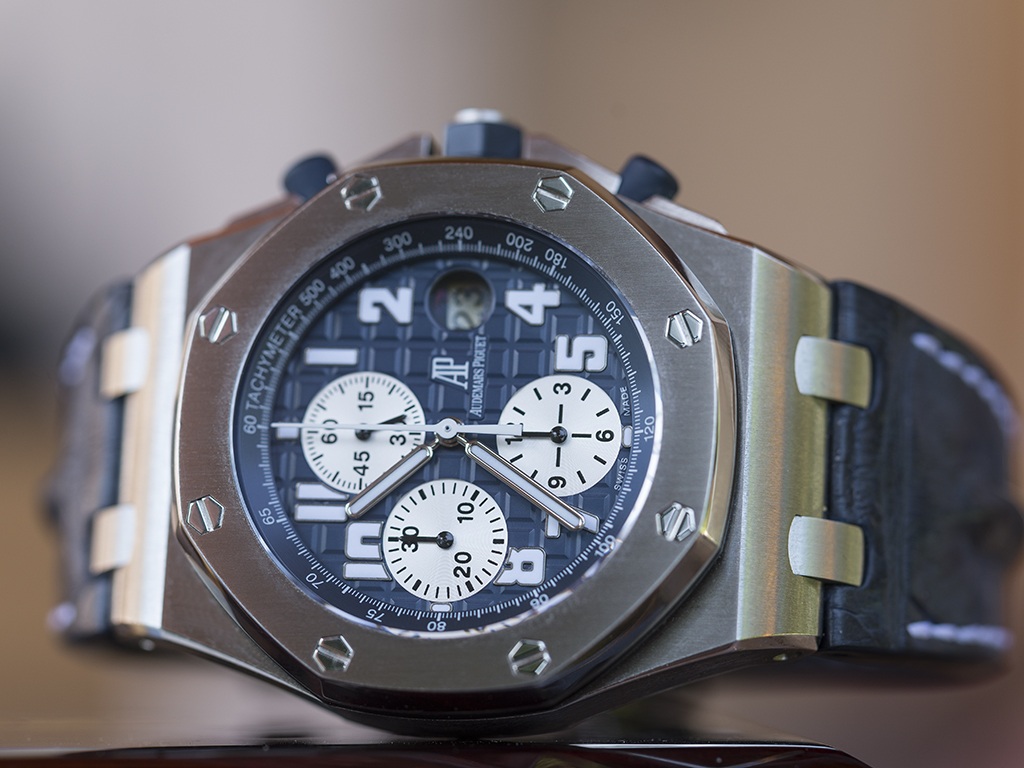 Presented in 1993 at the Basel Fair, the perception of the “Royal Oak for Youth” was not very positive. Max Büsser, Gerald Genta and other big names did not give the model a high chances to succeed. Soon the watch named “Offshore” however  created a new era in the world of horology.

The Royal Oak Offshore Chronograph remained for more than 20 years at the top of the list of its created segment. At the same time it became an inspiration for a number of watch brands, that started to follow this trend.

In the course of time a lot of different materials were used to produce the 42 mm case, that is giving a strong appearance to the Offshore model.

After enriched with various colored dials one of the most distinct differences were the rubber crown and chrono buttons. These were not very much preferred in the beginning, however Emmanuel Guet insisted on them.

Overhauled in 2014 the new Offshore models were equipped with ceramic buttons and crown, but for the brand’s early fans the rubber buttons will always have a special place in their heart. 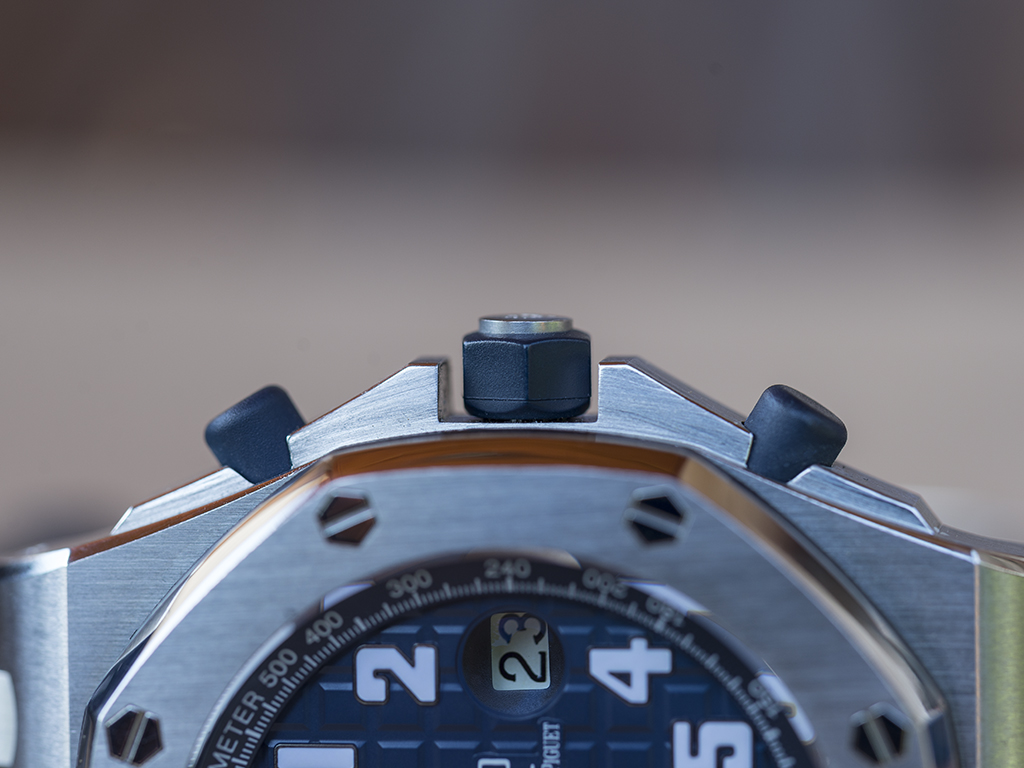 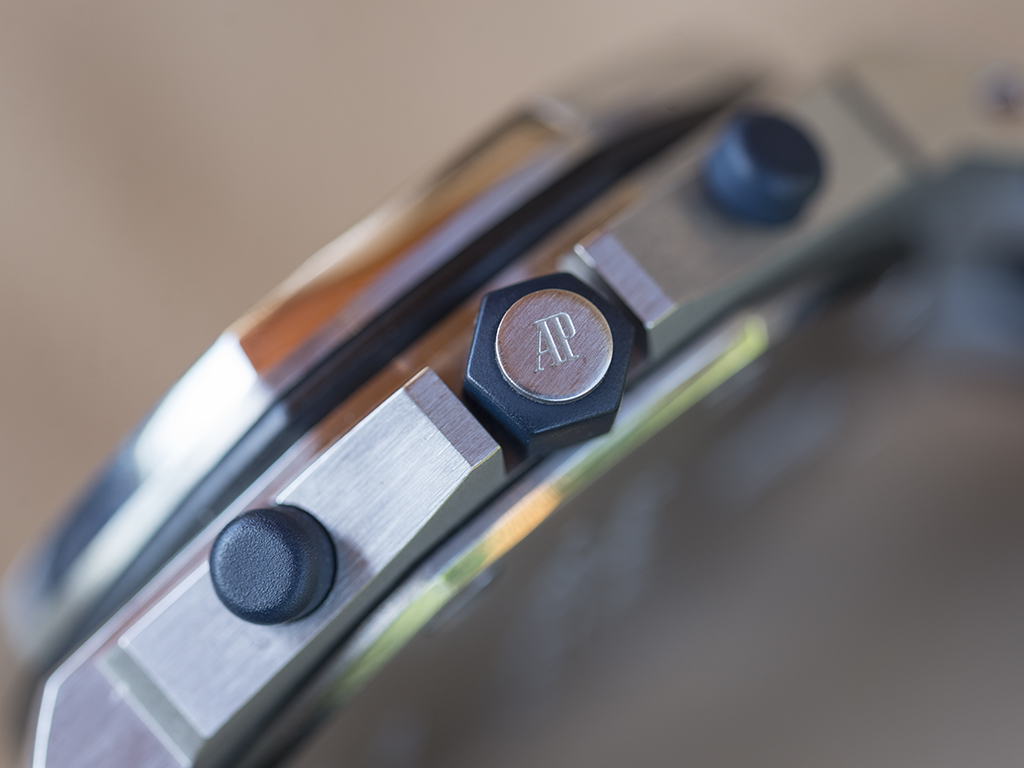 The octagon bezel, meanwhile the brand’s signature, was thickened a little to strengthen the sportive appearance of the Offshore model. The white gold hexagonal screws on the bezel are in harmony with all of the different dial options.

The shiny parts perfectly compliment the brushed surfaces visible on nearly all of the case. 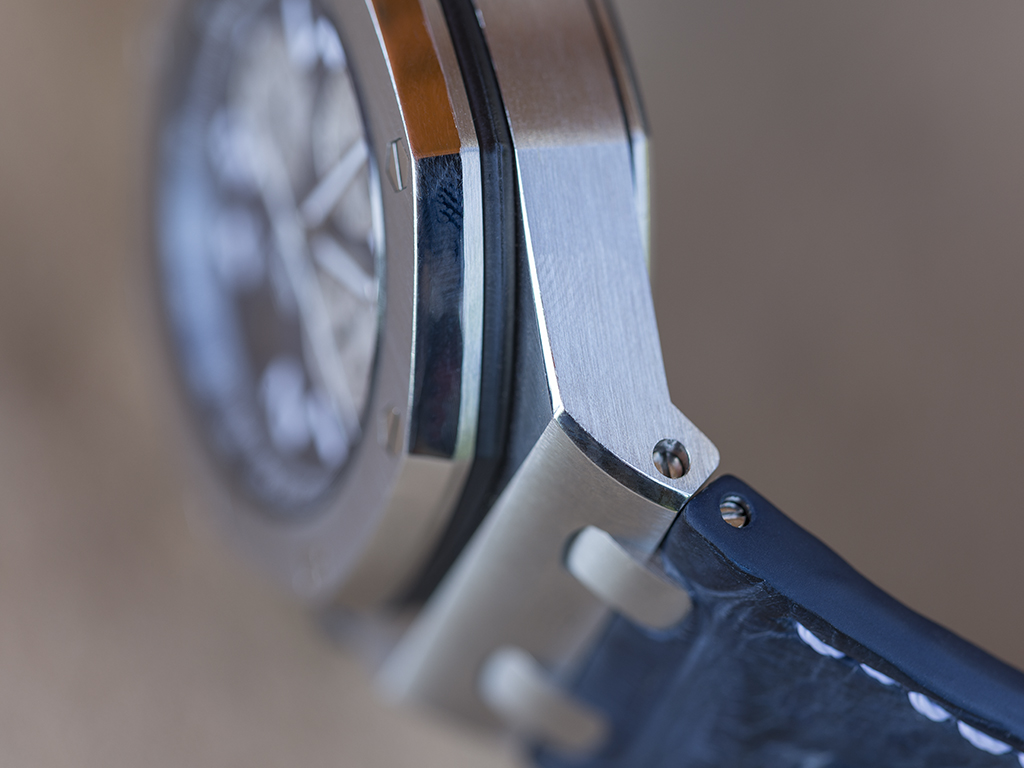 The sapphire glass is fitted with an anti-reflective coating, which ensures good readability, of the somewhat crowded dial with it’s chronograph indications. 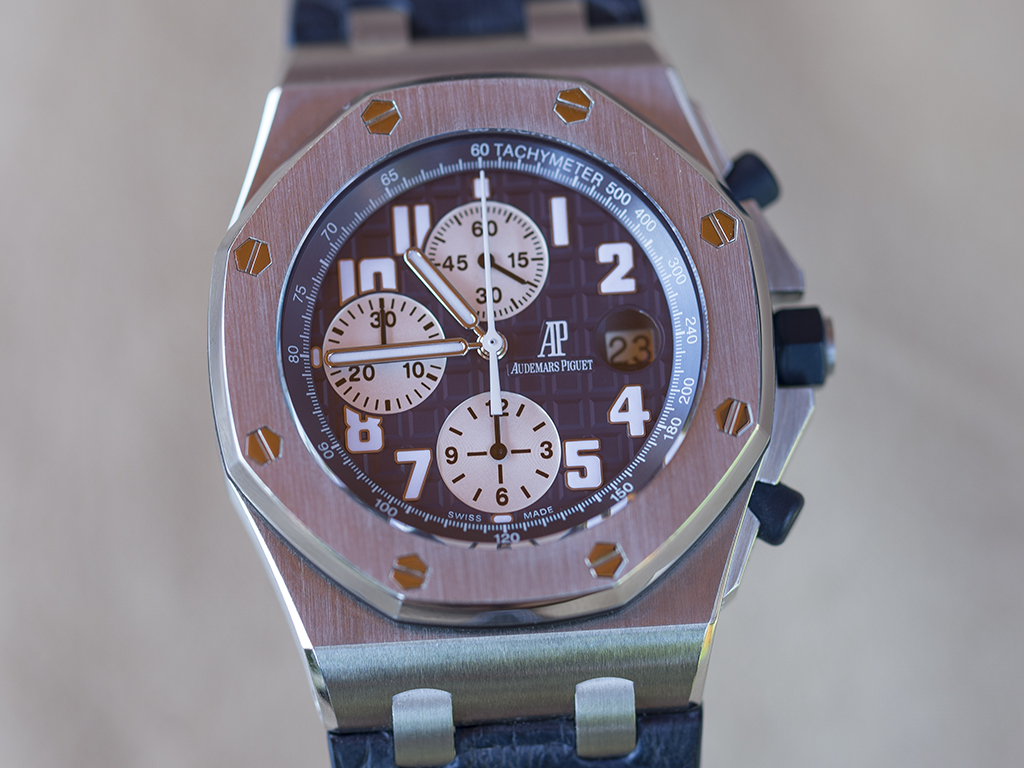 The case is fitted to the strap through two iconic links. 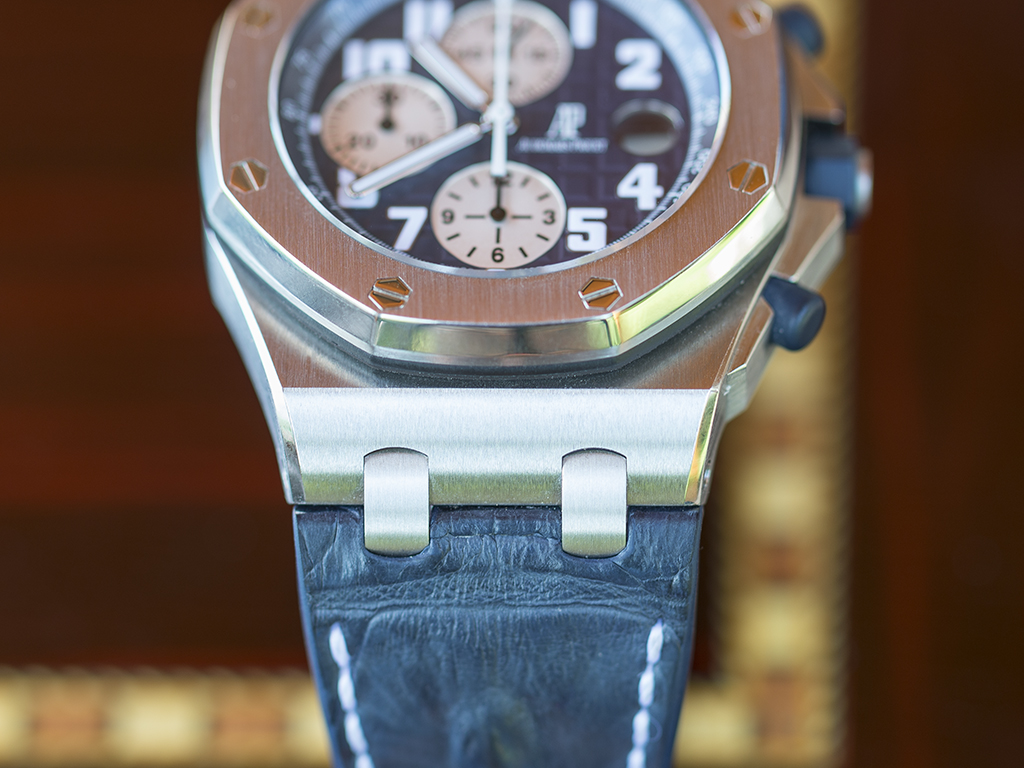 For some, one of the less appealing factors of the watch is the buckle used for the stainless steel bracelet or for the leather strap. The buckle is executed beautifully, however affects the comfort of the watch in a slightly negative way and might cause distress on the wrist. 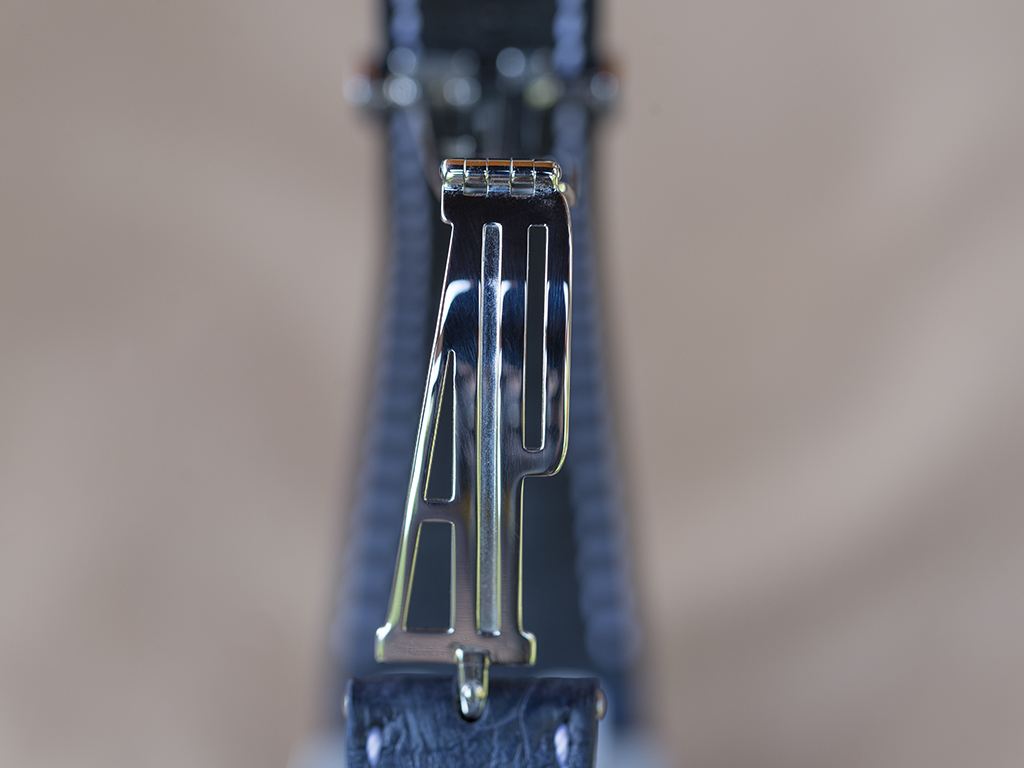 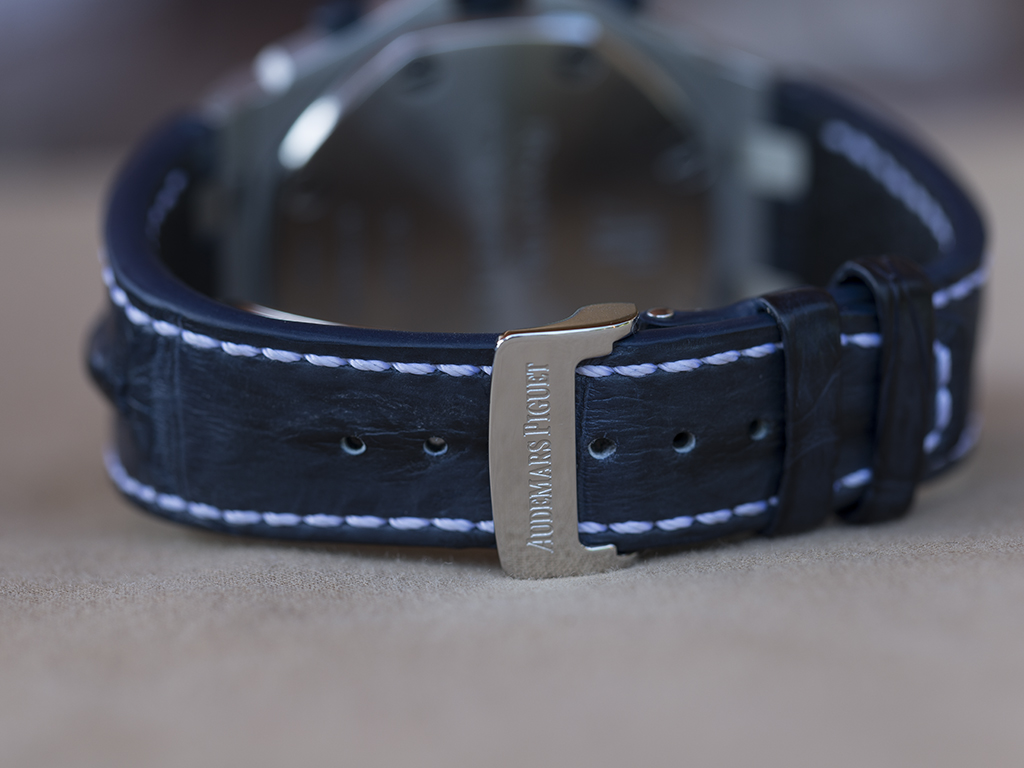 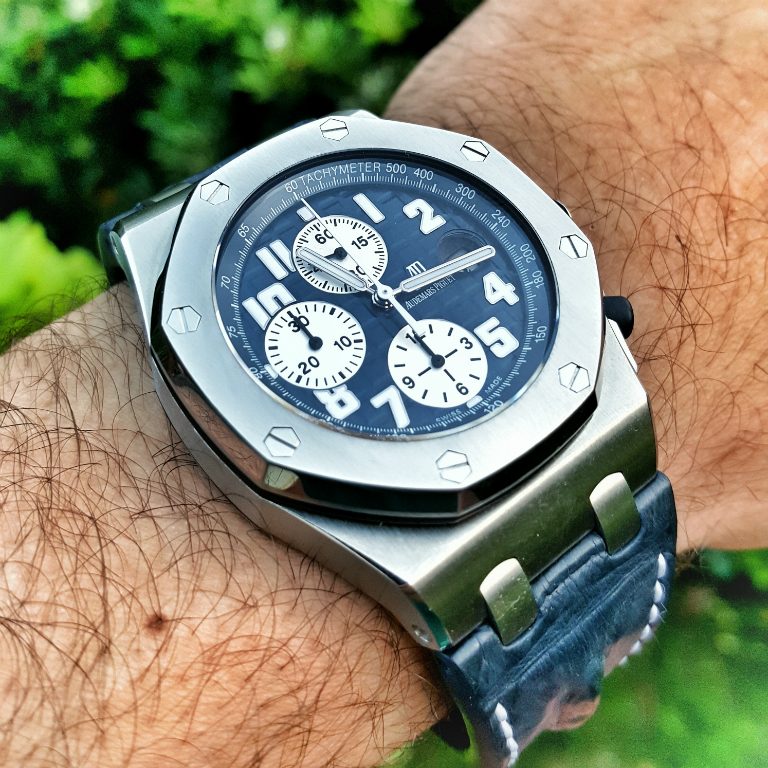 For the Offshore series Audemars Piguet did not produce a completely in-house caliber. As we remember from models with reference number 15400 the caliber no. 3120 was made with a Dubois-Depraz chronograph module encased in a anti-magnetic case.

This serves as a reason using a thick case for this sportive chronograph watch.

Another slightly undesired feature of the watch is the date indicator positioned rather deep, that complicates legibility. The reason for this is the modular chronograph system utilized in the movement.

The brand name, model, serial and case numbers are engraved on the caseback, which is kept in place by the eight screws on the bezel. This robust and sportive chronograph with a water resistance up to 100 meters is one of the most eye-catching choices in its segment. 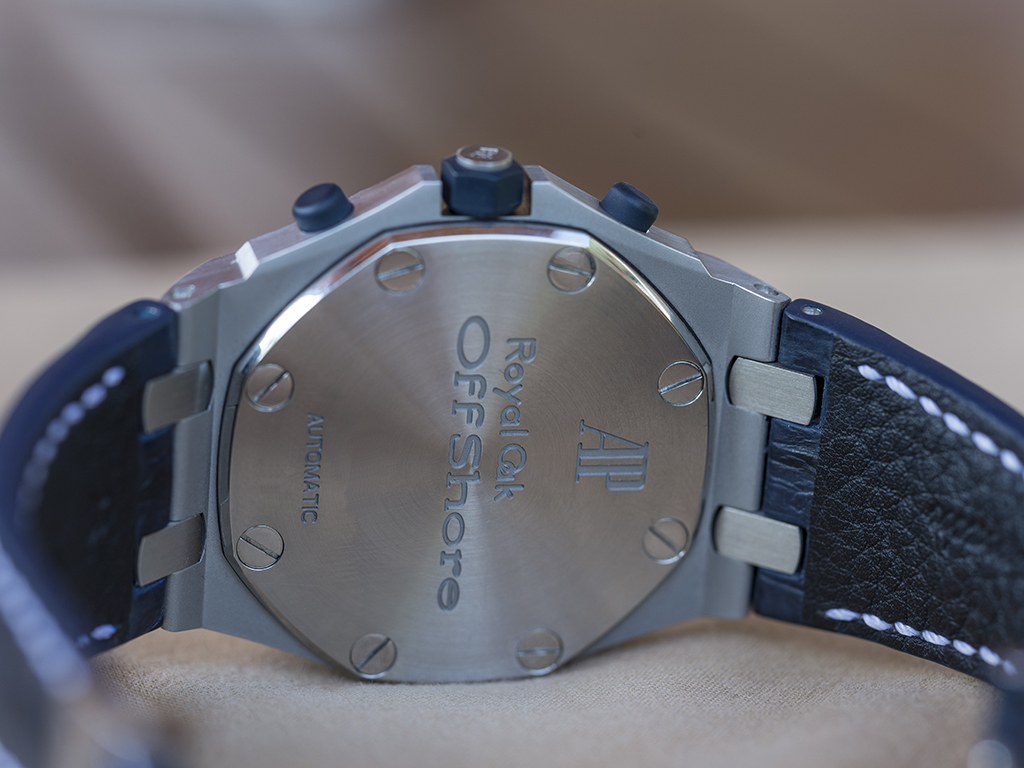 The model was only named “Offshore” after the first 100 pieces produced. These first 100 models do not carry the word Offshore engraved on their caseback, and have enormous value for watch collectors and connoisseurs. In a very short time period the Offshore series became one of the most popular models of the watch world, and created a very special segment of it’s own.

Even if the price of approximately 20.000 Euros of the standard collection models seems a bit high at the first sight, in our opinion the luxury feeling it provides it’s user with and it’s position among other sportive chronographs, this timepiece deserves all the money spent on it.