At SIHH 2017 we are witnessing the partnership of two important names that are always known by their relation with blue seas. The Italian-born Swiss watchmaker Officine Panerai and one of the world’s most important yacht races, the America’s Cup which dates back to 1851. America’s Cup is a thrilling race where the racing boats are trying to reach speeds of 90 km / h. The adventure, which started in the southern coast of England in 1851, will be held in Bermuda this year. Officine Panerai, one of the official partners of the excitement, introduced 5 new models which are dedicated to this unity.

You can reach the other novelties of Officine Panerai following the links below:

Our first model with reference to the PAM00727, is the official watch for the 35th America’s Cup race. With the 44 mm stainless steel Luminor 1950 case, the watch comes out as a visual feast. I can say that the red and blue colors of the series are the most attracting feature of the models. It’s been used for the first time, as far as I know, in the Panerai models, which have been in our mind for years but did not seem compatible with the brand’s history about the sea. Of course, the adaptation of the colors of the America’s Cup organization reinforces the meaning of the series. In PAM727, the date display is positioned at the 3 o’clock position as we were used to see in other Panerai models. 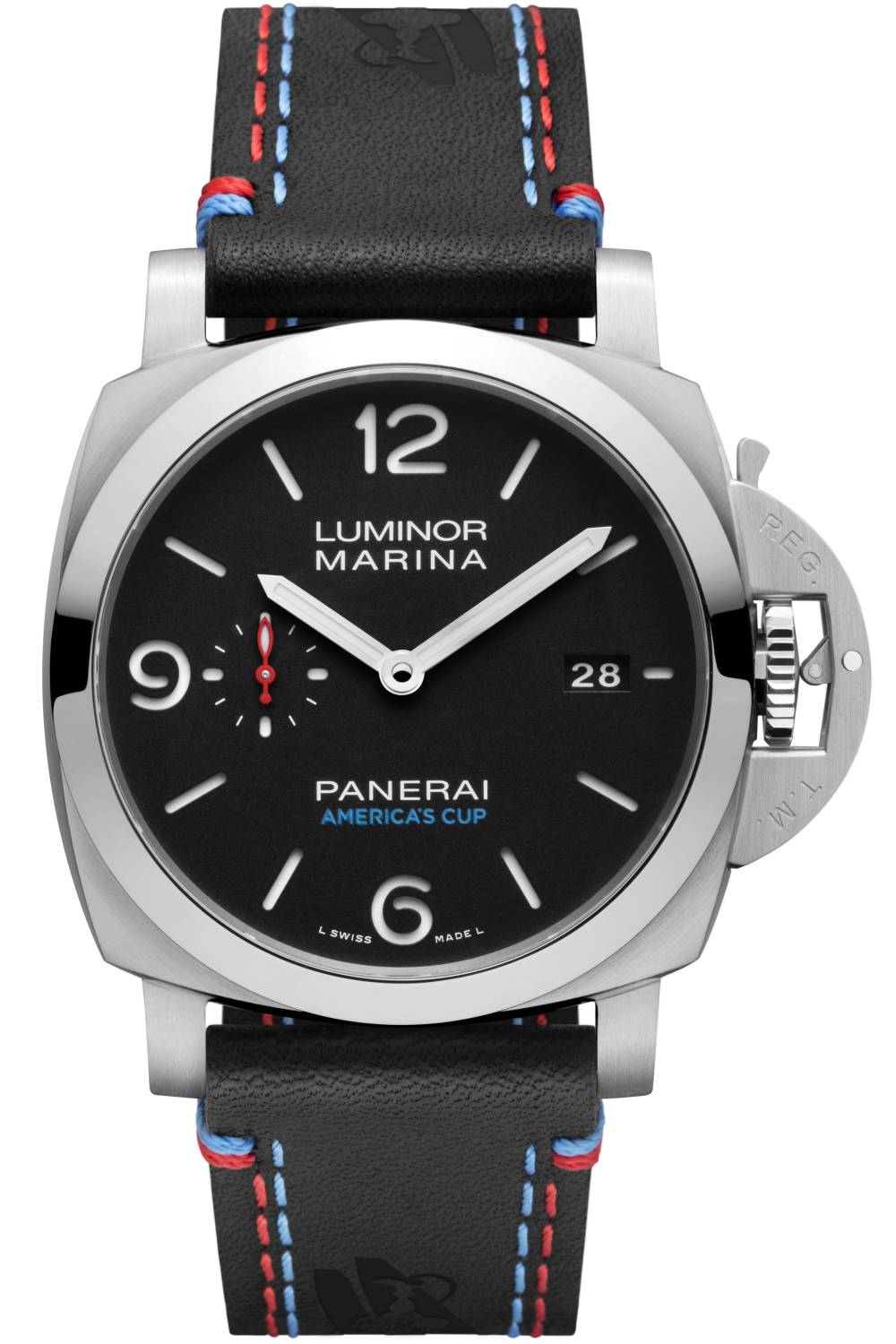 The blue America’s Cup writing and the red small seconds hand are in perfect harmony over the black colored sandwich style dial. One of the details that boosts the visual appeal to the top, is the leather strap offered with the timepiece. The America’s Cup logo was used on both sides of the strap, as well as a double row of seams made with two different colors that we had not seen before in Panerai models. 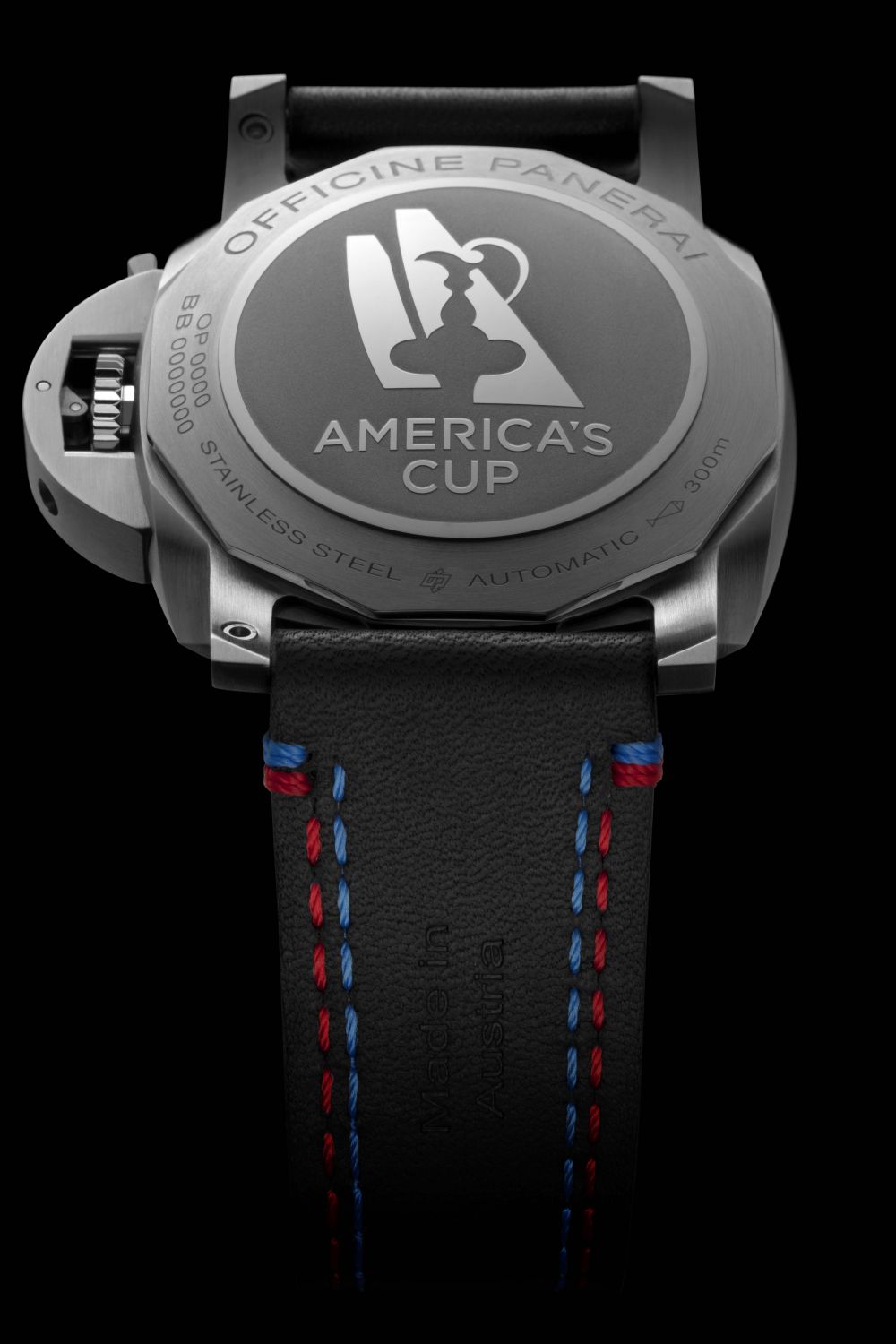 When we turn the back of the PAM 727, we can see the logos of the America’s Cup on the stainless steel caseback. On the part that we do not see, is the Officine Panerai’s in-house movement Caliber Ref. P.9010 that is beating. The P.9010 is fully compatible with Panerai’s new thin-case models. The water resistance value is 300 meters. PAM00727 will be limited to 200 units.

The three models in the series are dedicated to ORACLE TEAM USA, which won the last two races of America’s Cup in 2010 and 2013.

Officine Panerai, which has been highly acclaimed for its ceramic case models in recent years, seems to be getting the same blessing in the PAM00725, one of the official watches of Oracle Team USA. 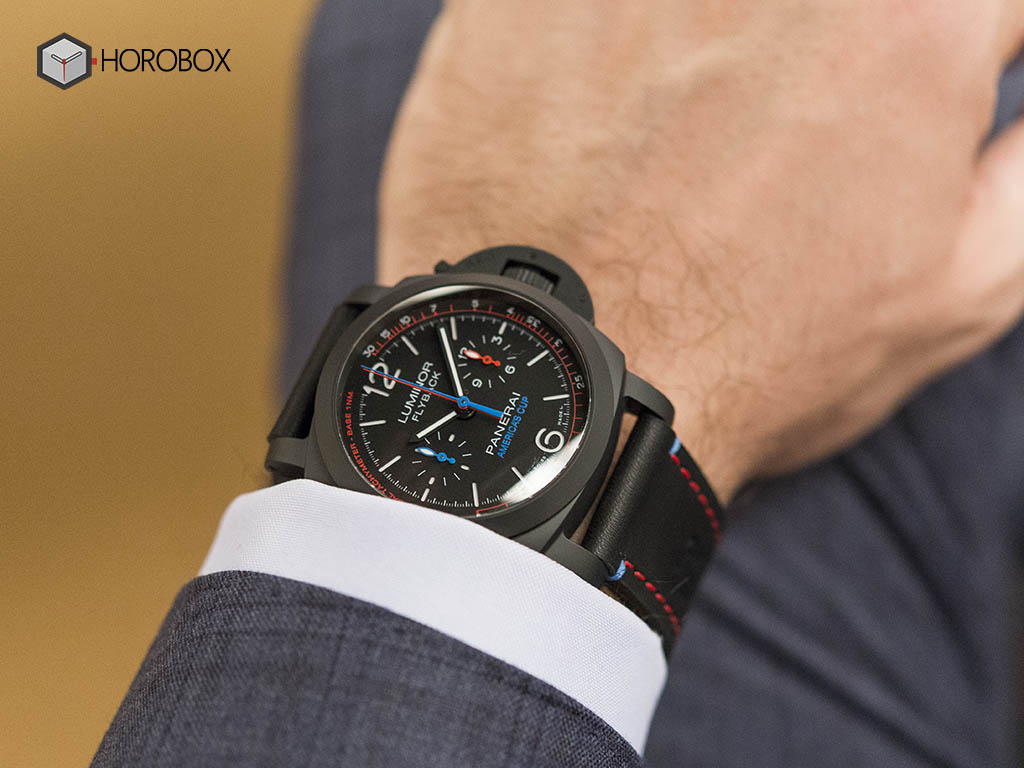 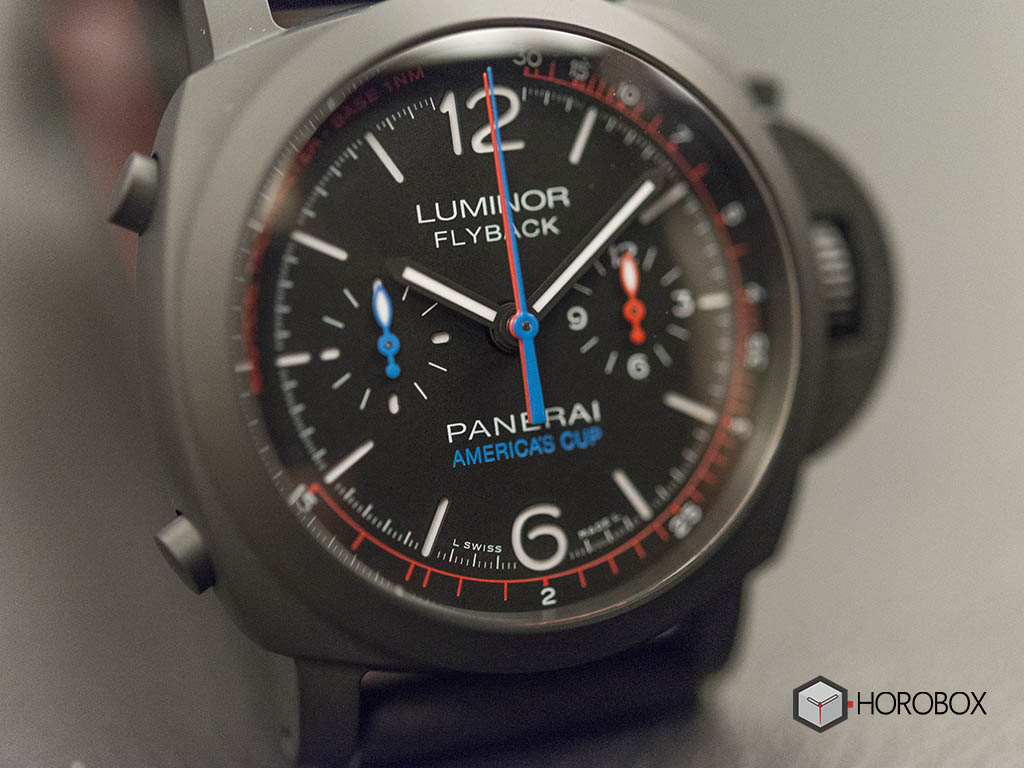 In the 44 mm ceramic case, red and blue colors are bumping again in connection with America’s Cup. PAM725, which I would like to call my personal favorite in the described models, has a sandwich dial that looks great with its color scheme. Flyback featured chronograph timepiece is again dominated by red and blue. At 6 o’clock, the logo of the America’s Cup is present, but the seams on the strap fall into a single row. Providing a very successful look and comfort on the wrist, the PAM725 features the engraving of the team it is dedicated to ORACLE TEAM USA. The case is waterproof to 100 meters. 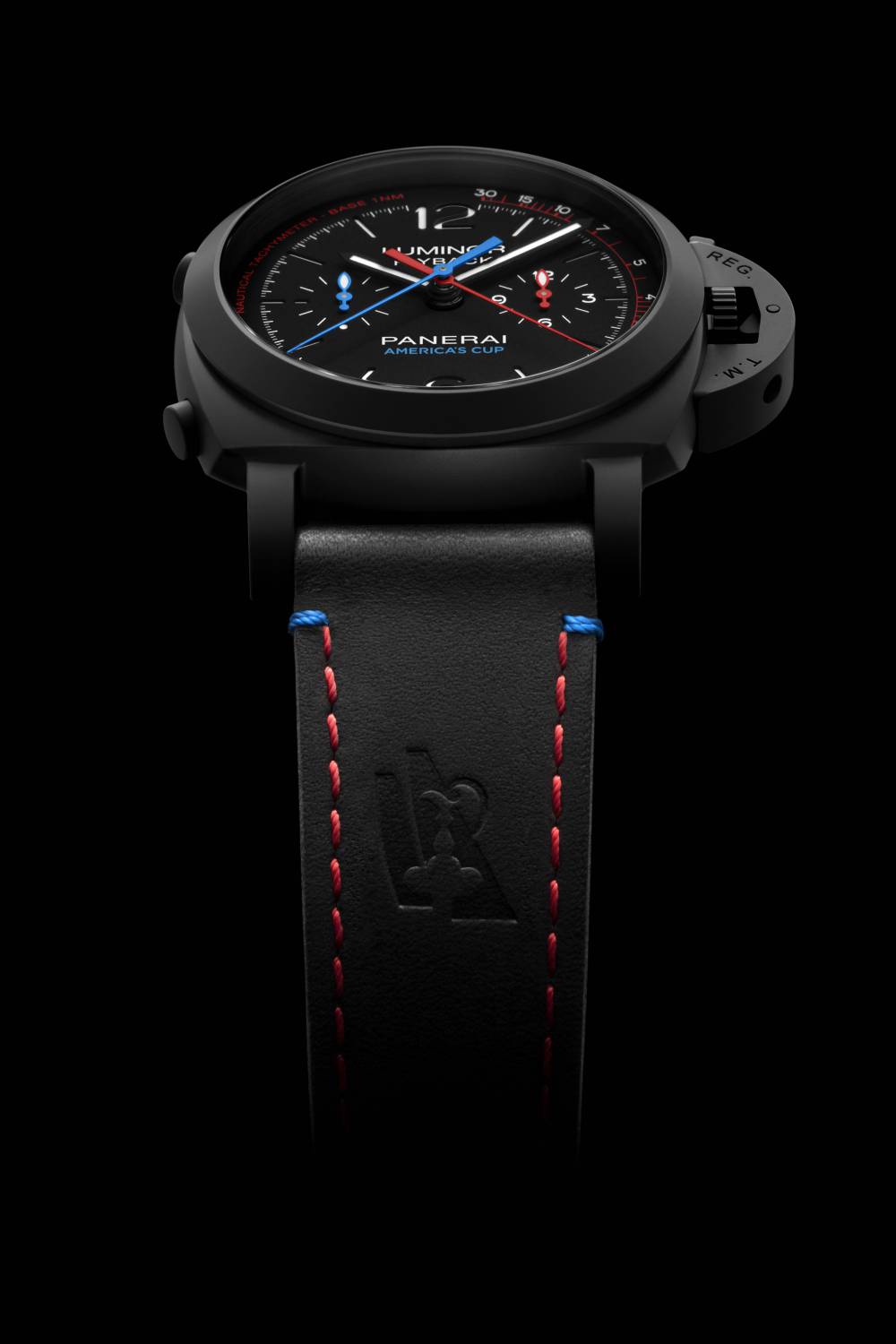 We recall the Flyback Caliber Ref. P9100 from similar models, which features a 3-day power reserve as well as the ability to reset the time measurement without having to stop it. Let’s see who will be the lucky owners of the models which will have a 200 pieces limited production, like the other ORACLE TEAM USA official watches. 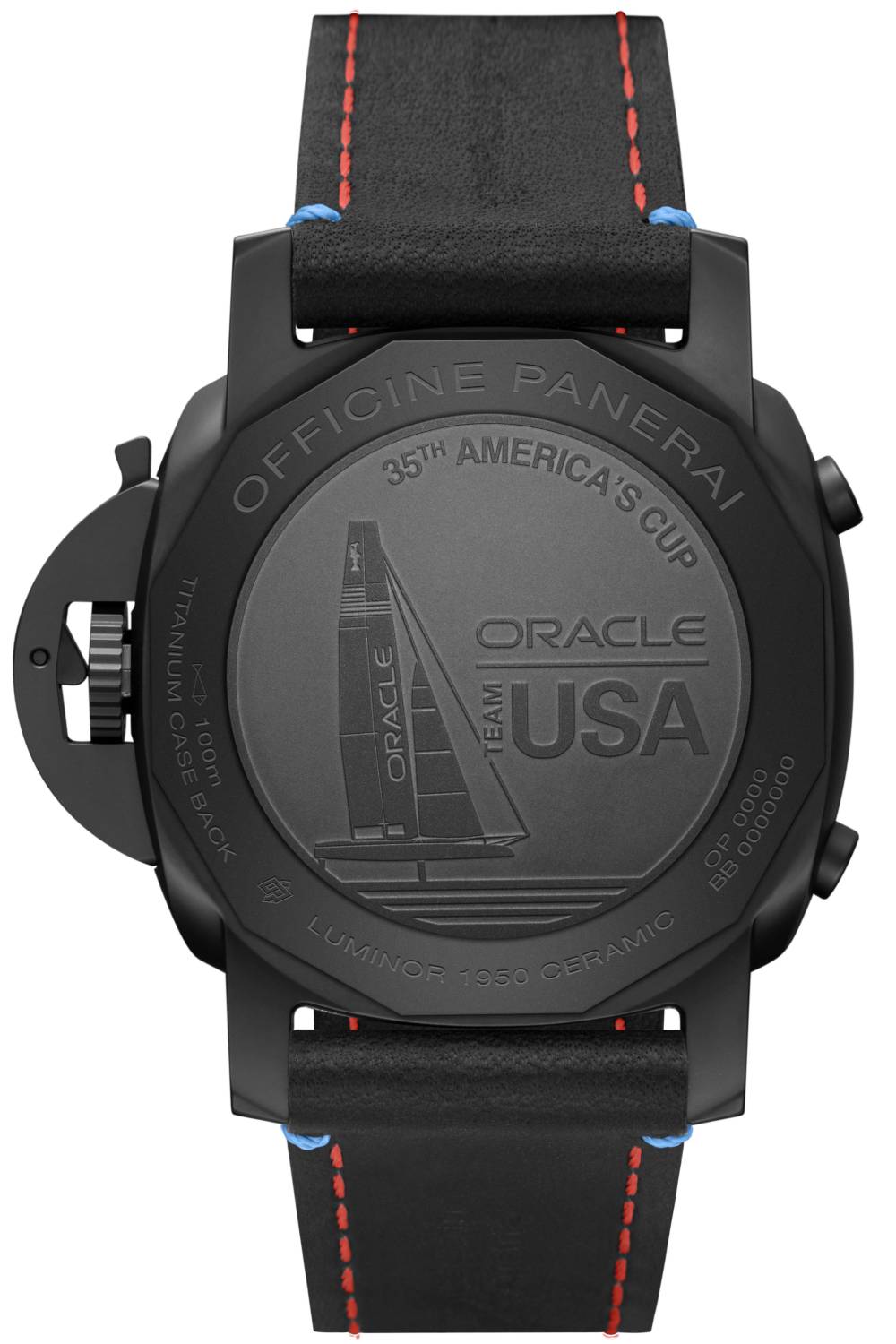 The second model made for ORACLE TEAM USA is the reference PAM00726. In addition to the 47mm titanium case, the model features the Flyback chronograph and the regatta timer which is a countdown function used in sailing races. The colors and details used in the PAM 726 do not differ from the other models in the series. 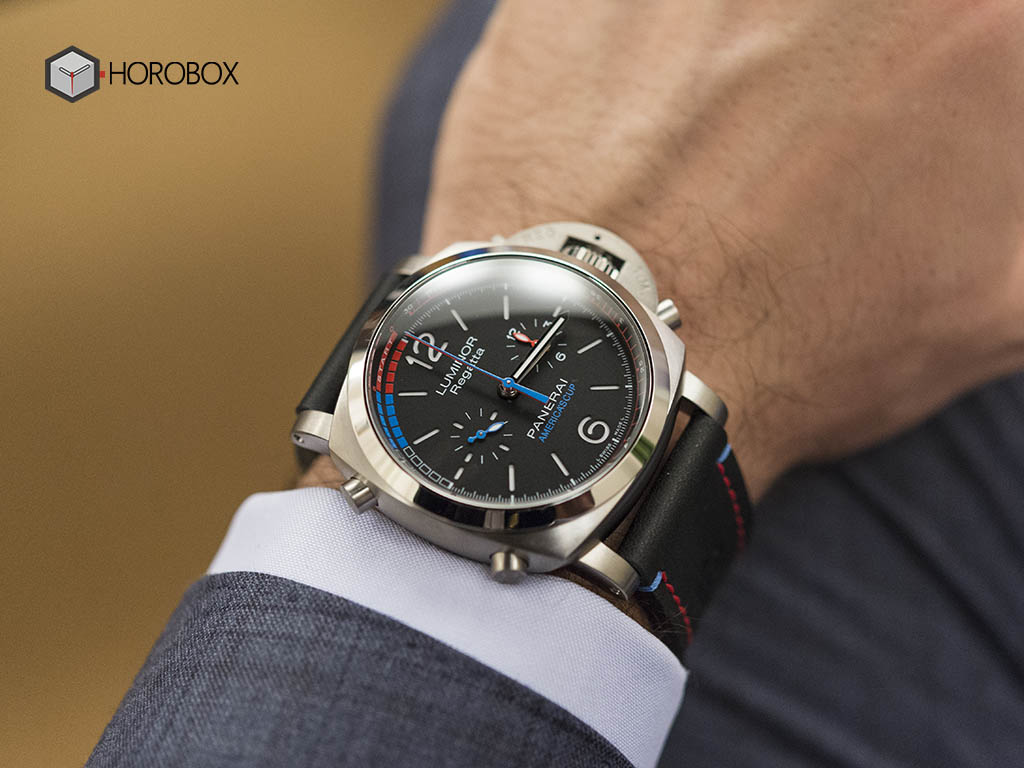 The P.9100 / R caliber also offers a 3-day power reserve. I think that the PAM726, which is a great alternative for sea and sailing enthusiasts, can also offer a pleasant use with an accordion type rubber strap. The model, which has a limited production of 200 pieces only, is very light and comfortable on the wrist, despite its large size. The timepiece is 100M water resistant. 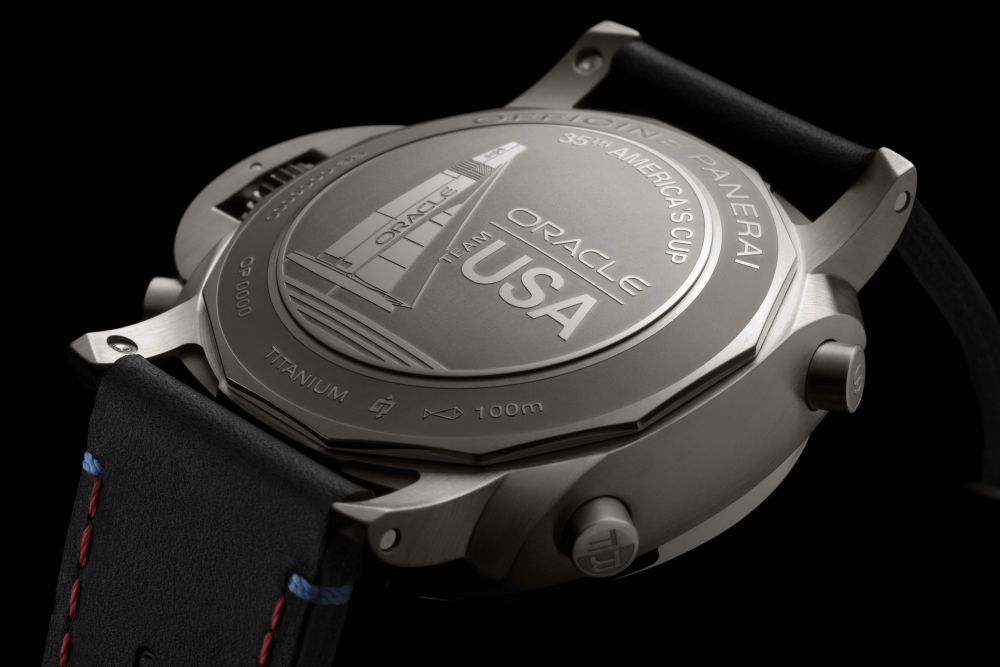 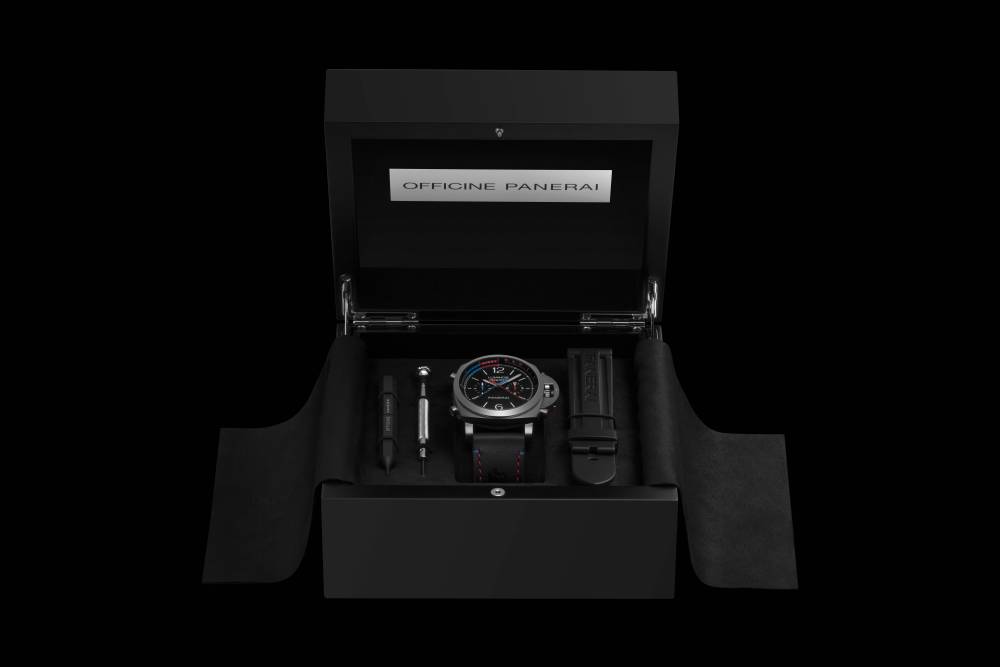 PAM00724 is the last model for ORACLE TEAM USA, the winner of the last two races. We can say that all the visual details are the same, and the attention grabbing features are the stainless steel Luminor case and the 8 day power reserve provided by the Caliber Ref. P.5000. The model will be limited to 200 pieces only and seems to be the most accessible alternative in the series with its price tag. The sandwich dial, the blue America’s Cup sign, a special strap, and the engravings at the caseback, match with the other models in the series. 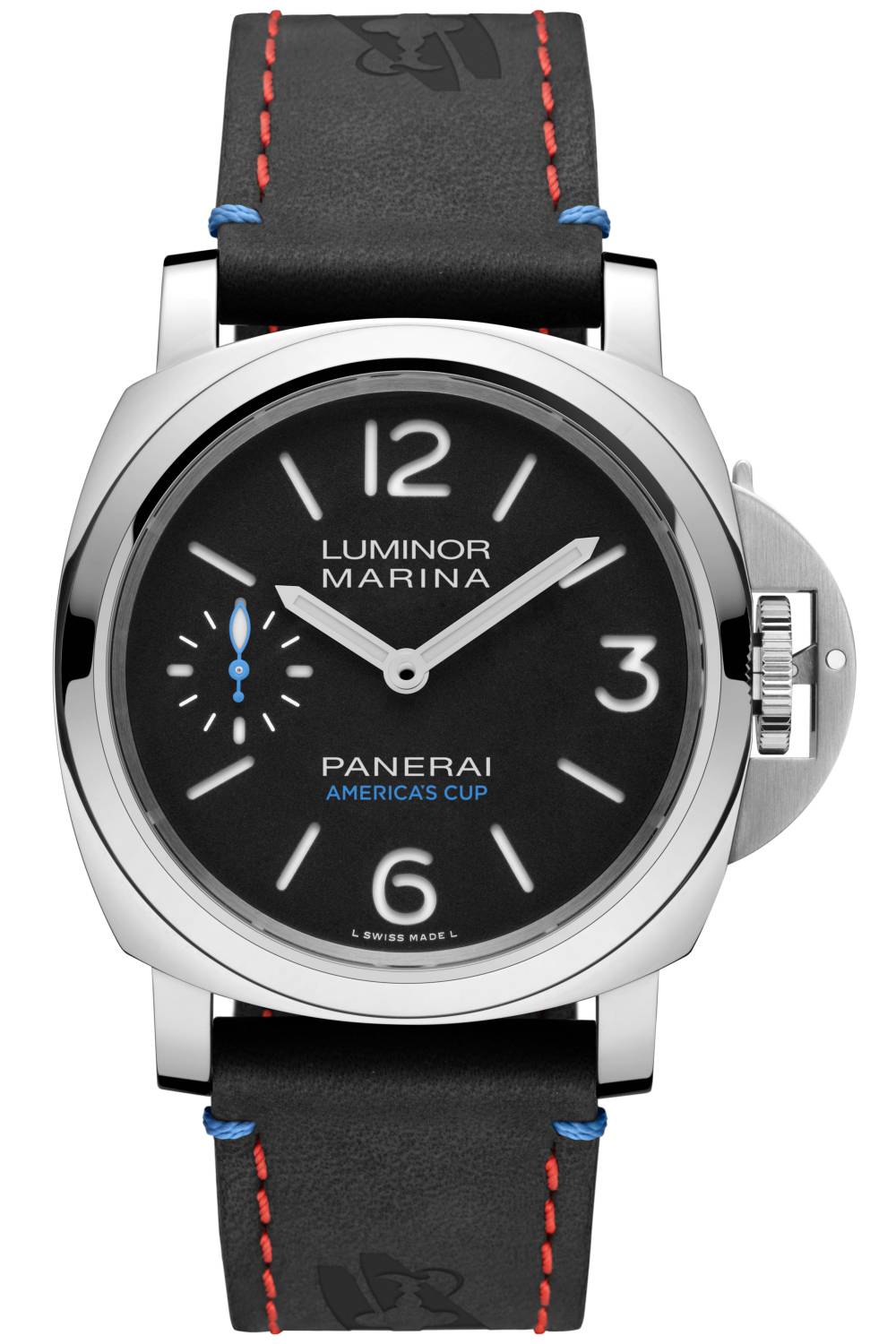 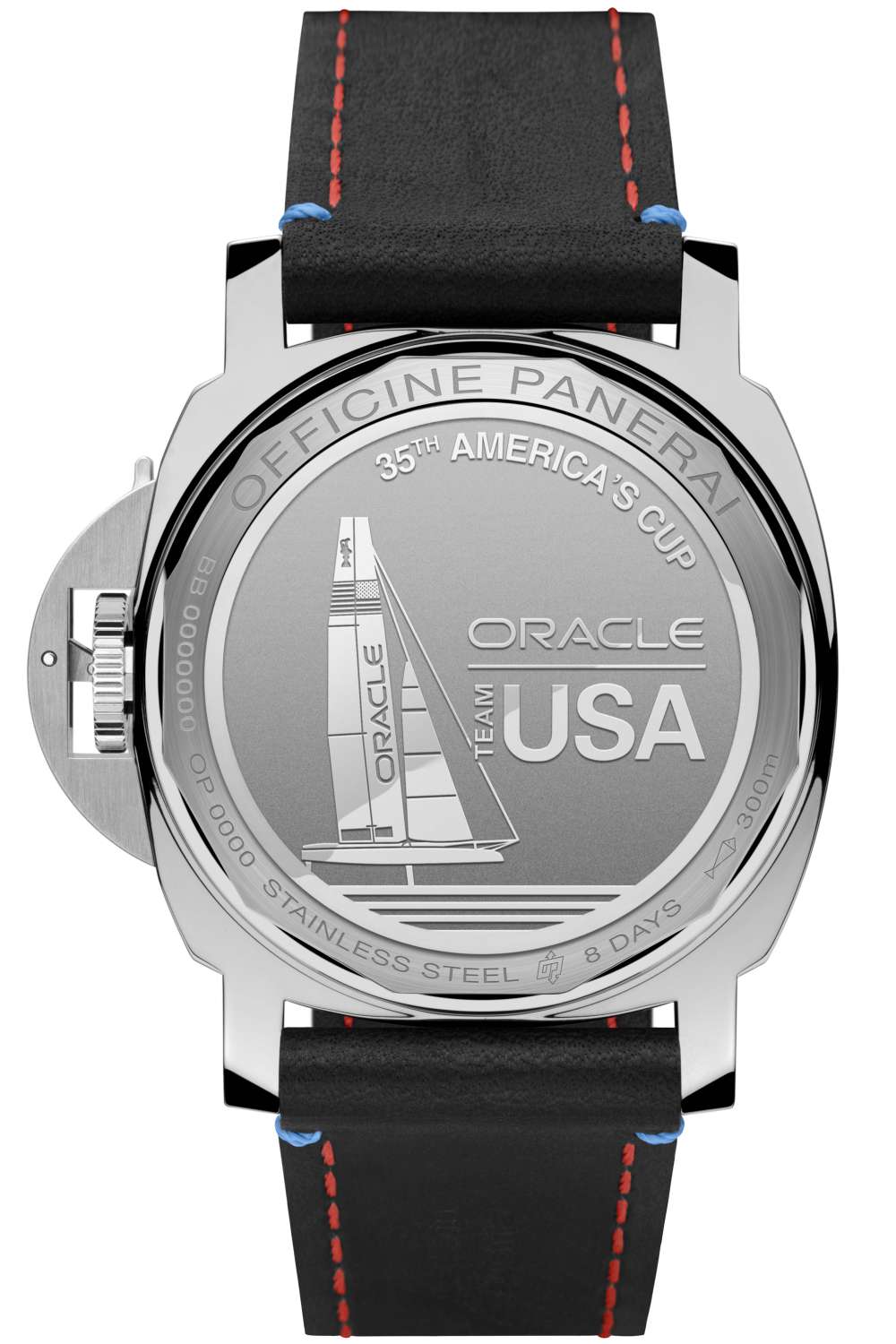 One of the major participants of America’s Cup is SOFTBANK TEAM JAPAN. Officine Panerai, which is an official partner of this team, dedicated the model PAM00732 to this team, and will be limited to 150 pieces only under the 2017’s special models. 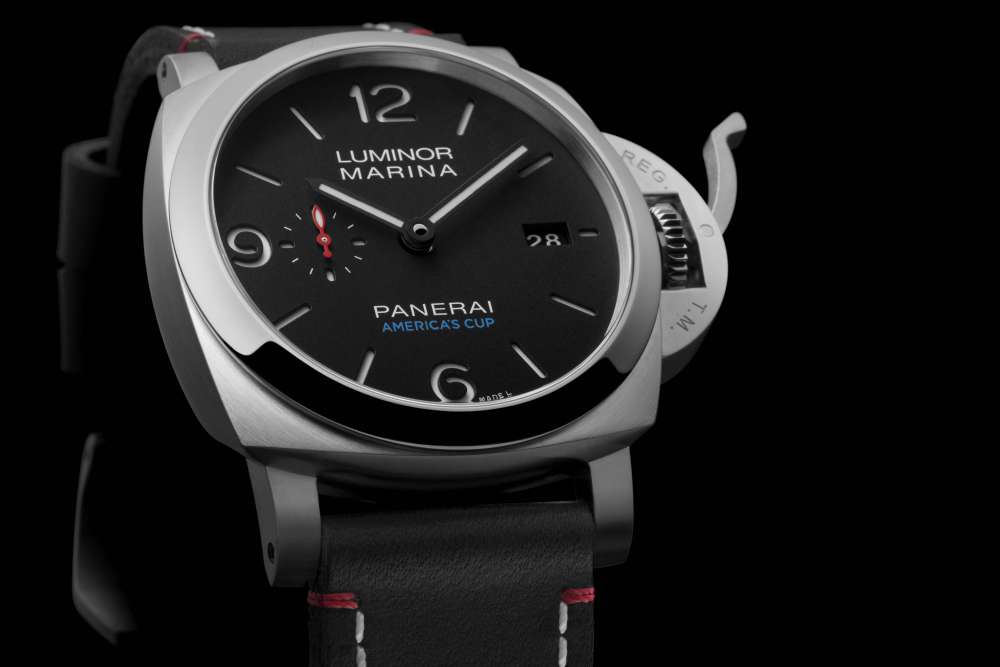 There are two differences in the PAM 732, which is the same as the PAM727, the official watch of America’s Cup. Different colors were used in the model and of course, the caseback features an engraving of the SOFTBANK TEAM JAPAN which is the team that the PAM732 is dedicated to. 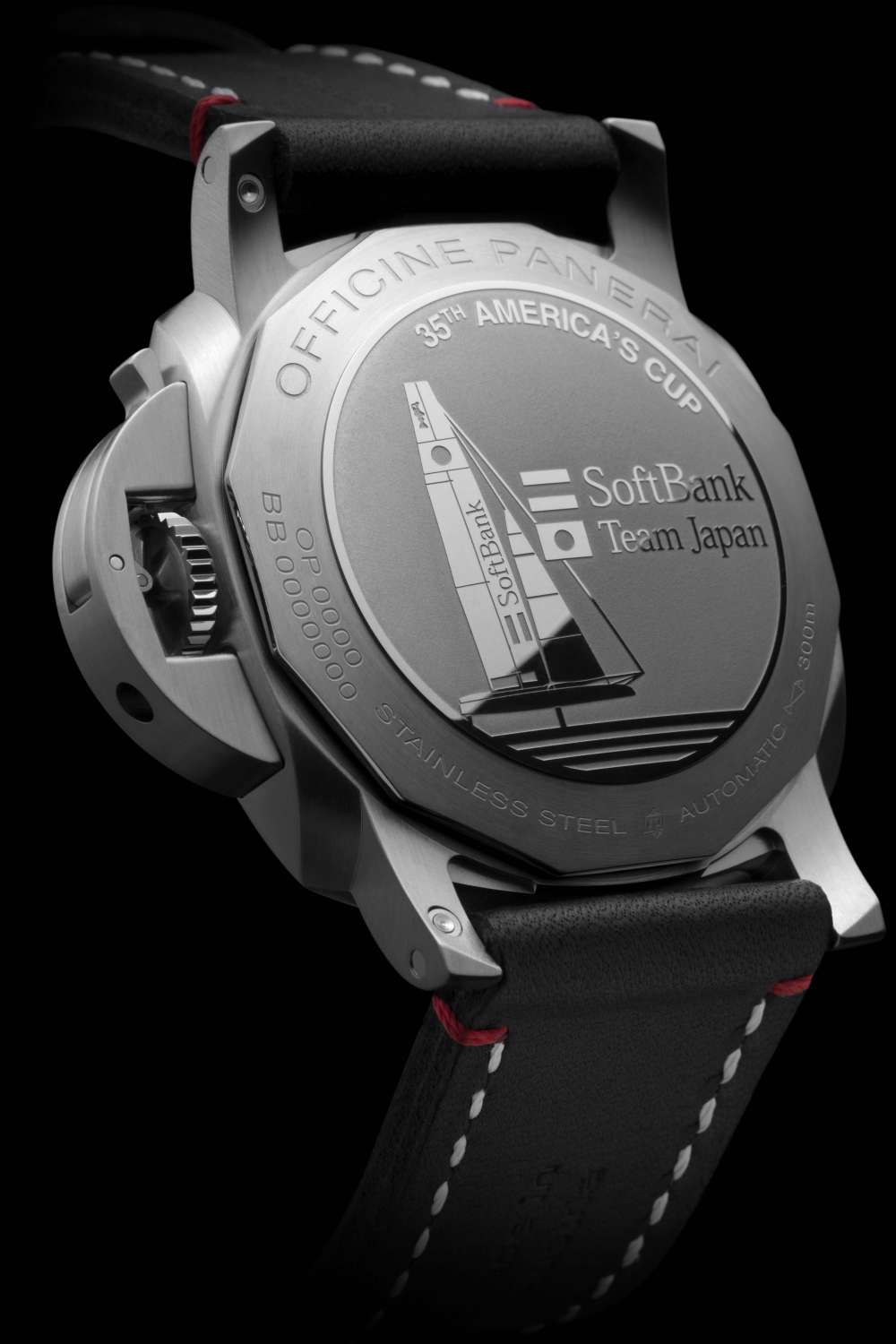